After a nice rest day I was driven back to the trail. Linnet and John dropped me off where I’d left off and would meet me at the Inn on the other side of the Hudson. I jogged across the bridge and towards the bear mountain zoo (no pack). When I arrived at the zoo/museum I spent sometime exploring since the trail goes right through (the bear cage is the lowest elevation on the entire trail). They had native animals on display, a small display on history and geology in the area, and signs identifying native plants. I thought it was pretty neat! After navigating out of the zoo I found John and Linnet at the bottom of Bear Mountain. I collected my pack and we began climbing the multiple steps to reach the top. The leaves were out and we had views of the Hudson below. When we arrived on top we ate some yummy deli sandwiches while enjoying the view before parting ways. There were really nice fall colors and views on my way down Bear Mountain. I found water towards the end of the day and bulked up because the shelter had none. I arrived just as it was getting too dark to see my feet, and to find a mass of Boy Scouts hanging around the shelter. Luckily none were staying inside so I got a bunk and settled in for the night.

The Board walk with Becky: 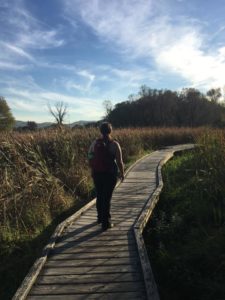 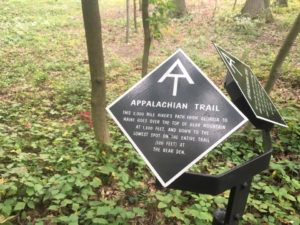 Mt Bridge over the Hudson River: 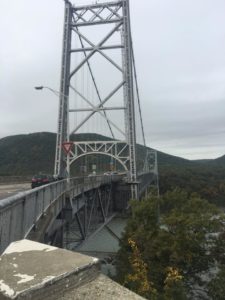 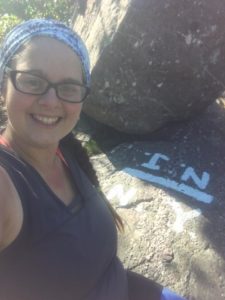 It was drizzling, windy, and cold the next morning. I headed out wearing a lot more then I usually do while hiking. After a few miles I arrived at a familiar place on the trail (I’d gone on a overnight here a year before). I decided to eat lunch because I was starving but shuttered whenever a cold gust blew near. It was fun walking where I had been before and the colors of the ferns were a striking yellow. I reached the lemon squeezer and I saw someone come up another way and I was able to climb down safely and then awkwardly walk through “the squeeze”. The trail passed Island Pond where I found a couple camping with a lovely fire set up. I was cold so I stayed by the fire for a while trying to warm up. I missed a turn on the trail and had to back track. It was now looking like I’d have to do some night hiking just to get to a camping spot with a water source. I crossed above 87 and after a steep ascent of stairs I heard voices. I saw two guys with a huge fire hanging out and in my desperate state (it was getting dark) I asked if they had any water to spare. They pointed out a gallon jug and said it had a little Gatorade powder but was up for grabs. I decided to stay and set up on a nice mossy spot nearby. They shared some hard cider and later a small steak because they had extra. It tasted like the best steak ever and I paired it with some mac and cheese. I enjoyed the fire a little and then tried to go to sleep but the smoke was coming towards my tent and they were up partying until three in the morning. I think the water and the steak made it worth it in the end though! 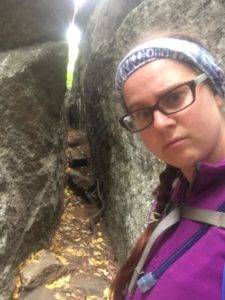 Ice Cream in the Cold

I woke up exhausted and smelling strongly of campfire. It was an extremely cold morning and I hiked out wearing gloves. There was a water cache on the road below where I filled up a little. The trail was super rocky and I spent a lot of the time looking for the trail. I ran into a day hiker named Dan and we walked together for a few miles before we got to his car. He was really nice and ended up giving me a few bars and some water! I continued until the next road intersection where a very good creamery was right up the street. I stopped in for a milk shake and to fill up on tap water. I had a few miles left and it was getting late. It was a nice evening to night hike. The moon was out and I was walking atop some slab next to a dark body of water. I found a flat area to set up camp and did so exhaustedly.

It was another chilly morning and I had trouble getting from sleeping bag to hiking mode. The terrain for the day looked like it would be pretty flat and I felt like I’d be at my destination in no time. It was rocky though and hard to follow. I even saw some rebar which reminded me of Maine. Before I knew it I’d arrived at the NJ/NY border! I continued on and within my first mile in Jersey I found myself lost. The white blazes seemed to move in two different directions and I took one of the blazed pathways before it ended fifteen minutes later. I figured out that it was an old re-rout and luckily some other hikers pointed the right way. I was very frustrated and trying to make up for lost time when I found myself off the trail for the second time of the day. I paced around a lot until I was able to reconnect with the white blazes. I was aiming to get to route 94 but after being lost for nearly 2 hours I gave my friend Becky’s dad a call to get picked up at an earlier location. Thirty minutes later I found him waiting for me at the next road! We headed back to his house where I got to shower, do laundry, and eat a really good meal. It was a nice change to being lost in the woods! 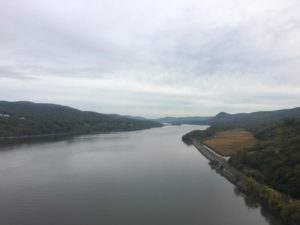