I packed up and made breakfast, which was oatmeal with dried blueberries. I forgot I packed the blueberries in the box I mailed to Monson, and it was a nice surprise. As we ate, the large group of girls who were tenting up the hill came down to talk to their friends. We got on the trail and started the day with a climb. The views were clear and beautiful. 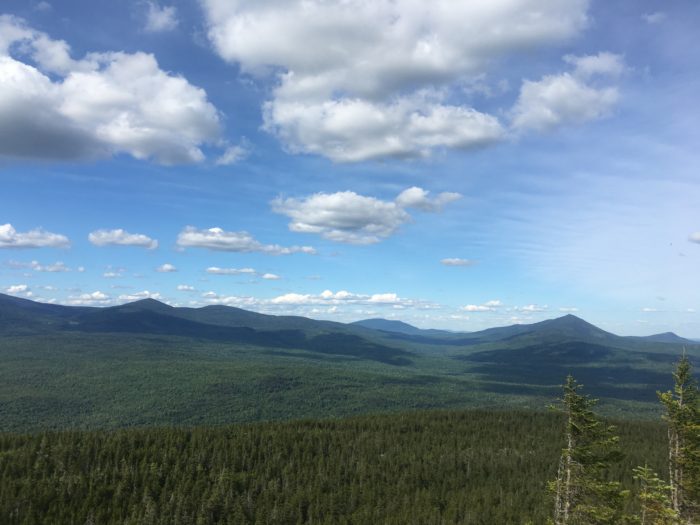 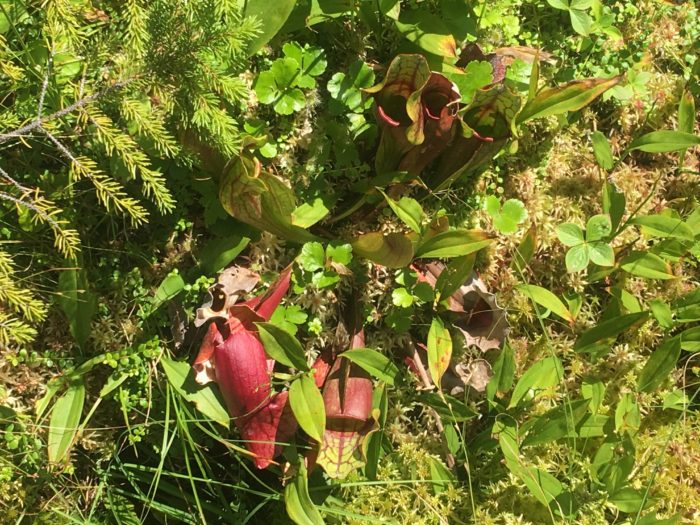 Carnivorous plant in a bog 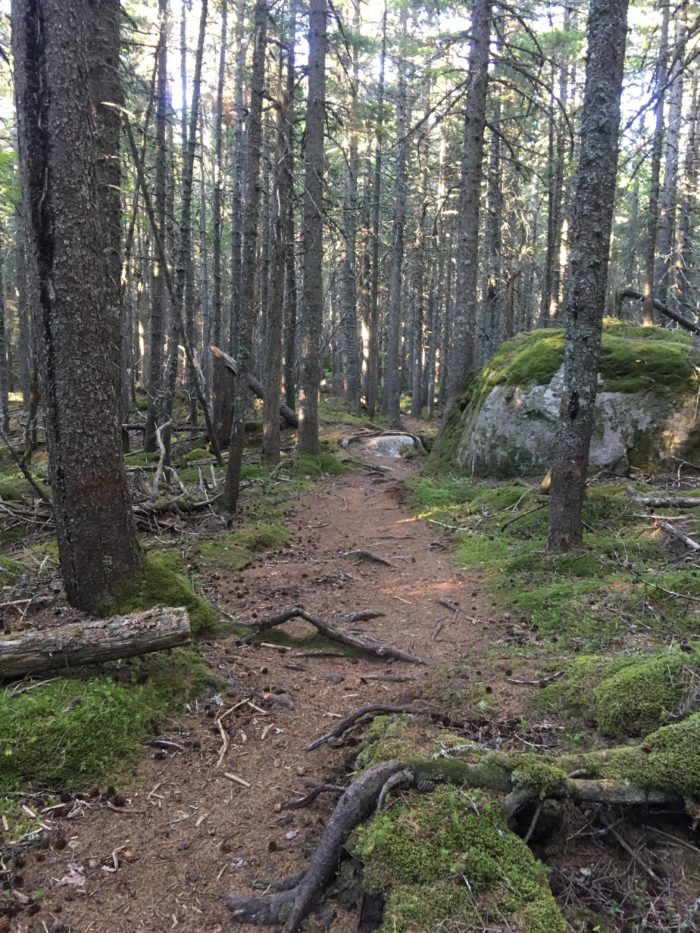 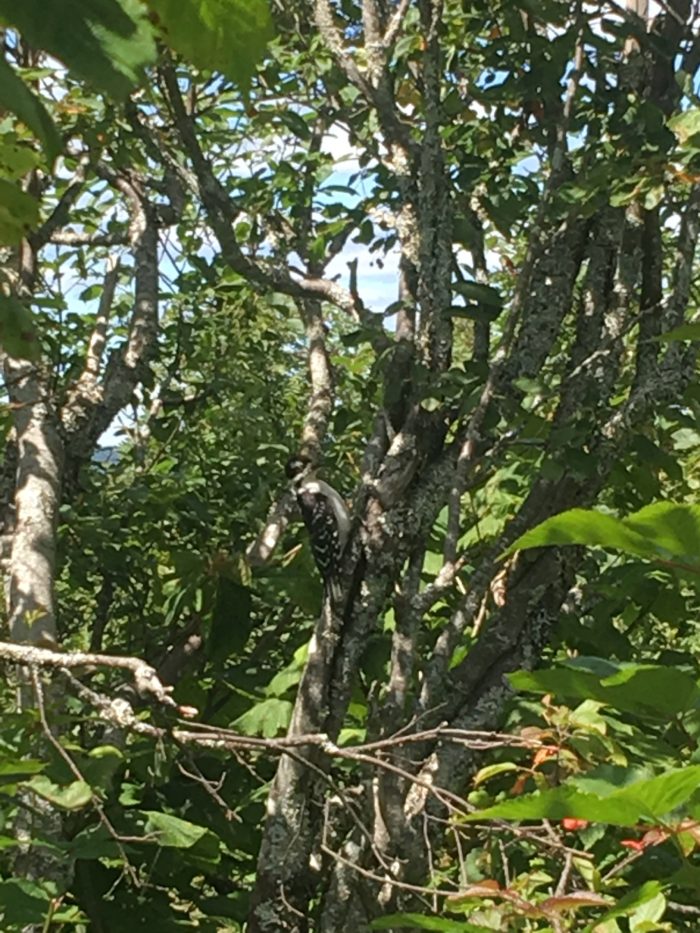 We crossed a stream that was listed as a ford, but we were able to rock hop. I was tired and hungrier than usual, so the back to back climbs were difficult. I stopped at the shelter on trail for water, and found a large group of boys from a camp. The water was down the trail on a steep hill, so I took my pack and investigated, only to find a stagnant muddy puddle. I was completely out of water, but there was another source in a mile.

*A moose antler Rash found while investigating the water situation

I got to the other source and found Piñata sitting, and Rash was trying to find the water which was listed as off trail with no luck. We were thirsty but pushed onto the road 2 miles ahead which had a stream flowing nearby. We filled up and I drank a liter while sitting.

The boys were camping by the water, and we pushed on 0.4 miles to the listed campsite, and found Mayzie and Frog (Flip-floppers I originally met in the gear shop at Shaw’s). We hammocked near them, right before the river that’s listed as a ford. We all ate dinner together and reminisced about the trail.

Despite chugging a liter of water with dinner, I didn’t pee before bed and didn’t get up in the middle of the night to pee. I was also feeling groggy in the morning, probably from dehydration from all the dried up water sources yesterday. That was the second or third time I’ve hiked thirsty with empty water bottles, and I’ll be glad if it’s my last.

We ate breakfast and packed up, leaving after Mazyie and Frog. It was still chilly, so I kept my puffy on and didn’t put on my ininji sock liners to walk the 0.1 to the ford. This ford wasn’t as bad as the last, and I took my time to step on rocks that wouldn’t kill my feet or slip. We put our shoes on and headed down the trail.

I lagged behind Rash and Piñata, and stopped to use the restroom that is the great outdoors. I walked off trail through some thick brush, pulled down my pants, and immediately felt something sting my left upper thigh. I saw something black buzz around me, and I ran back to the trail and didn’t stop until I was far up the trail. The welt and the surrounding redness and swelling on my thigh looked bigger than the one on my leg a few days ago, but thankfully it hurt a little less. I put numbing cream on it right away instead of waiting which probably helped too. I was a little nervous of the stinging beasties to go off into the woods to finish what I’d started, but thankfully it happened without further incident.

I wasn’t feeling great while hiking in the morning, and I kept stopping to eat something or rest. I stopped at the shelter for a break, and it was blissfully empty. I ate a tuna packet in olive oil which actually wasn’t half bad, and watched a dark eyed junco bounce around. I read the log book and saw friends that were ahead about to summit or had already summitted, and it felt bittersweet to read those names for one of the last times. 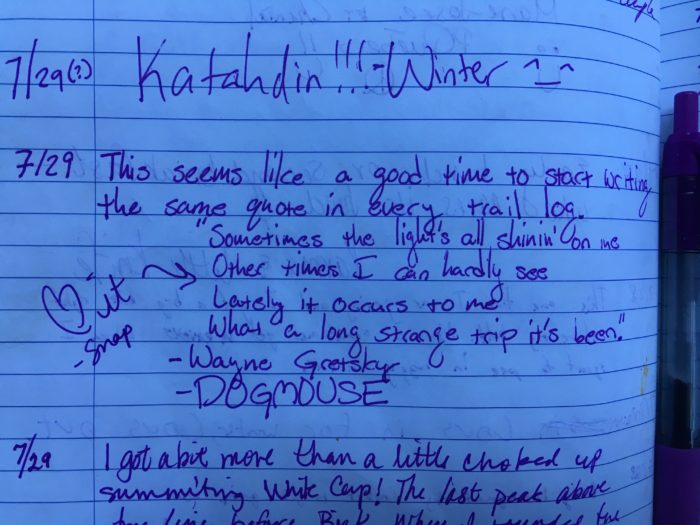 There were 4 climbs today back to back, but they weren’t as bad as the elevation profile showed. They mostly had stone staircases or soft pine needles to walk on. Going up the first climb, I checked if I had service and texted my family. 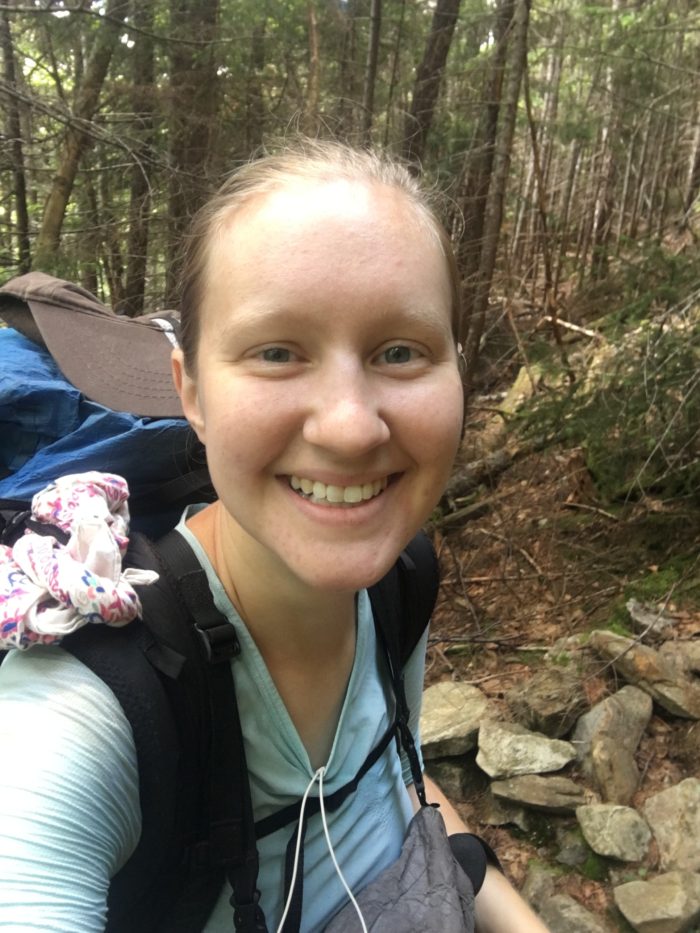 Selfie on the first climb

I walked over a small hill, and on the rock was a white K with an arrow. I looked through the trees and thought I saw Katahdin, but I wasn’t sure. It didn’t look flat enough on top. I continued on through a semi cleared field, and I ran into Leslie (Curls), who is friends with my mom. She’s doing the flop part of her flip-flop hike after her grandson was born. We had a nice time chatting, and she gave me some good information for Whitehouse landing and the rest of the 100 mile wilderness. 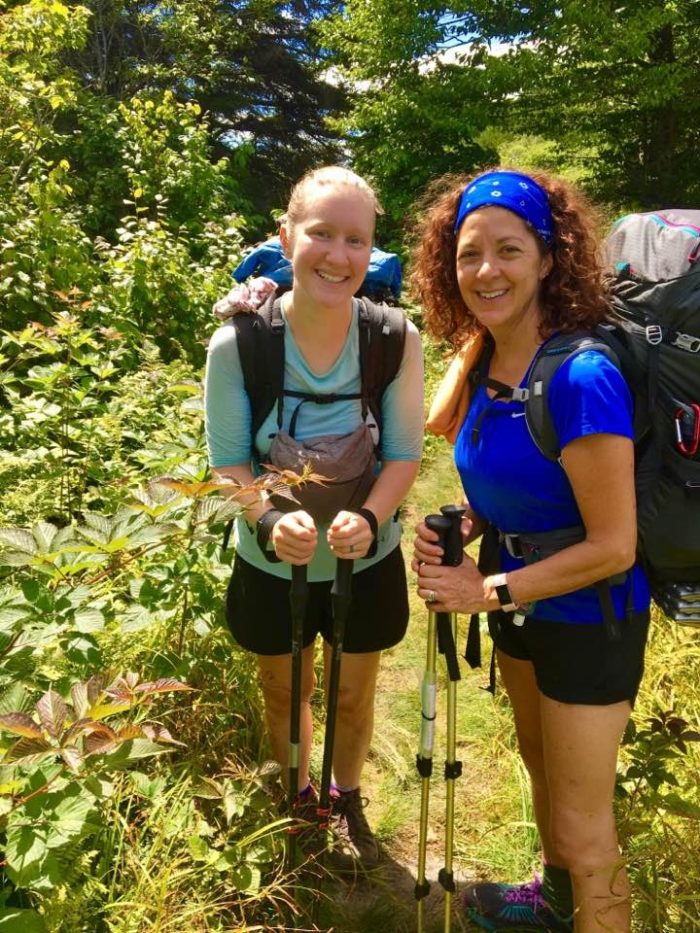 Going down the second climb, I saw 3 workers in yellow ATC hard hats. 2 were rolling a huge stone uphill by hand to be placed as part of the staircase they were building. It looked like grueling work, and the stones were huge. The third worker was placing smaller stones to line the steps and pouring buckets of dirt in the cracks. I thought about all the stone staircases I’d walked just today alone, and I thanked them for their work that made my hike easier. 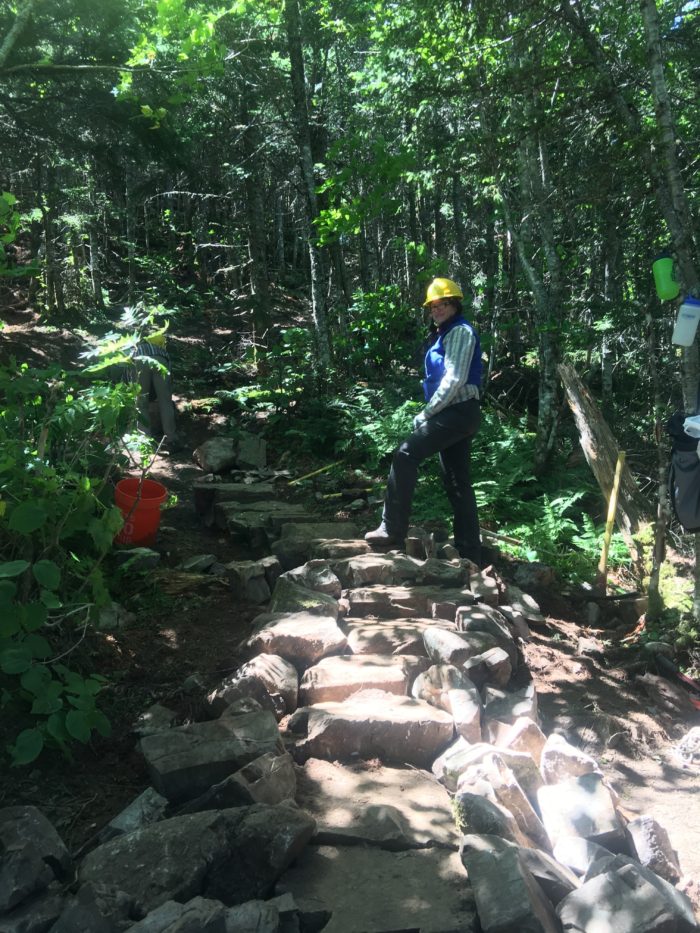 The third worker lining the steps with smaller stones 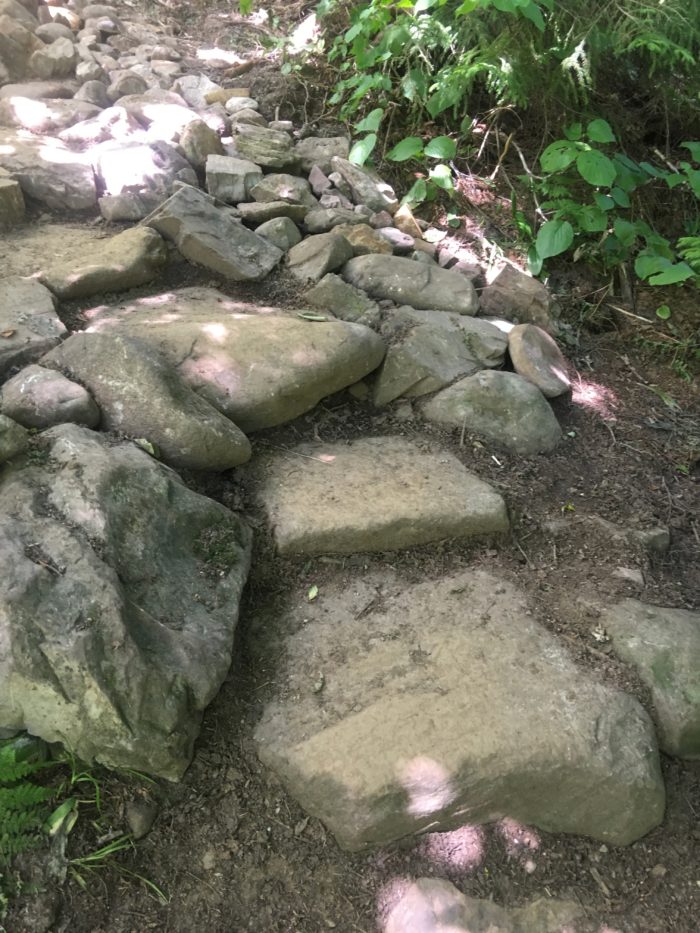 Staircase made out of the huge stones the workers were moving by hand!

I came to a campsite where the workers had a tarp set up with their supplies. I left my pack with the tent and went down the blue blazed trail for water. It was flowing slowly, and I managed to get a bag by holding it under a small, leaf filled waterfall. A fair amount of leaf debris got into my bag, but with all the dried water sources from yesterday, I was just glad this one was full.

I hiked it up the hill and went to sit on a log near the campsite. A couple were sitting having a snack. The girl, Kim, started a thru hike in 2009 from Springer and made it to Mt Washington before quitting. I was amazed she made it so far and then quit, but she described feeling burnt out with hiking, and I could somewhat relate. When we had lots of rain in New York I was feeling burnt out and ready for it to be over. I enjoyed their company and we talked for a few minutes before leaving.

The 3 first peaks had wooded summits, but the last mountain (Whitecap), had a mostly cleared rocky summit. I came to a large carin (taller than me), and it had N and S labeled on rocks as well as a rock with VIEW. I went down the short trail without my pack, and came face to face with a picture perfect Mt Katahdin in the distance. It was an impressive mountain, dwarfing the other mountains surrounding it. I stared at it for a long while, feeling a mixture of elation and grief for the approaching end my of thru hike. 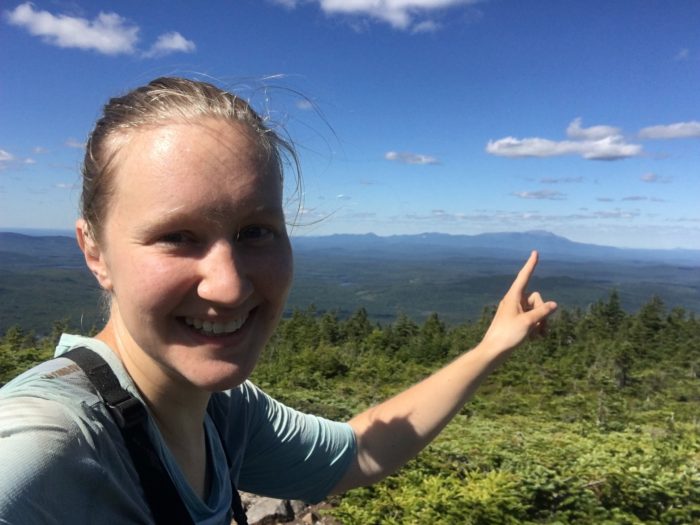 I had LTE, so I talked to my family and posted to Facebook, using most of my remaining battery. My full battery lasted 3 full days on mostly airplane mode, which is the longest I’ve gone without charging it. When I had my fill of the mountain, I went back to the looming carin and ate some snacks. Kim and her significant other came along and we talked some more before I headed down the trail.

I came to the first shelter and met a teenaged boy and his dad out for a section hike. I told them about the lack of water going south and pointed out water sources that were dry, and the teenager told me about good swimming spots. I met a couple doing a SOBO section with a very sweet pit bull named Meadow, and I continued the 3 miles to the next shelter.

I passed a rather murky pond and heard crashing and branches breaking in the distance. It didn’t sound urgent, just like the rambling along of some animal. I tried to stand still to listen some more, but I was quickly covered in mosquitoes (even wearing bug spray) so I hurried on. The terrain was beautiful and the miles went by in no time. I came to the shelter where Rash and Piñata had set up. The tentsites were crowded with 2 groups of people and a lot of single tents. I found Mayzie and Frog at the shelter as I went to get water and chatted with them.