No one else arrived at the shelter overnight, so we had the campground to ourselves for breakfast. We got on the trail and enjoyed the continued relative flatness of New Jersey compared with Rocksylvania. The weather was beautiful and sunny. We stopped at the visitors center for an early lunch and met Shivers, Shivers Dad, and Danger Dan. Rash, Piñata, and I sat in the visitors center for a while, drinking our free Pepsi they graciously donate to tired and thirsty thru hikers. 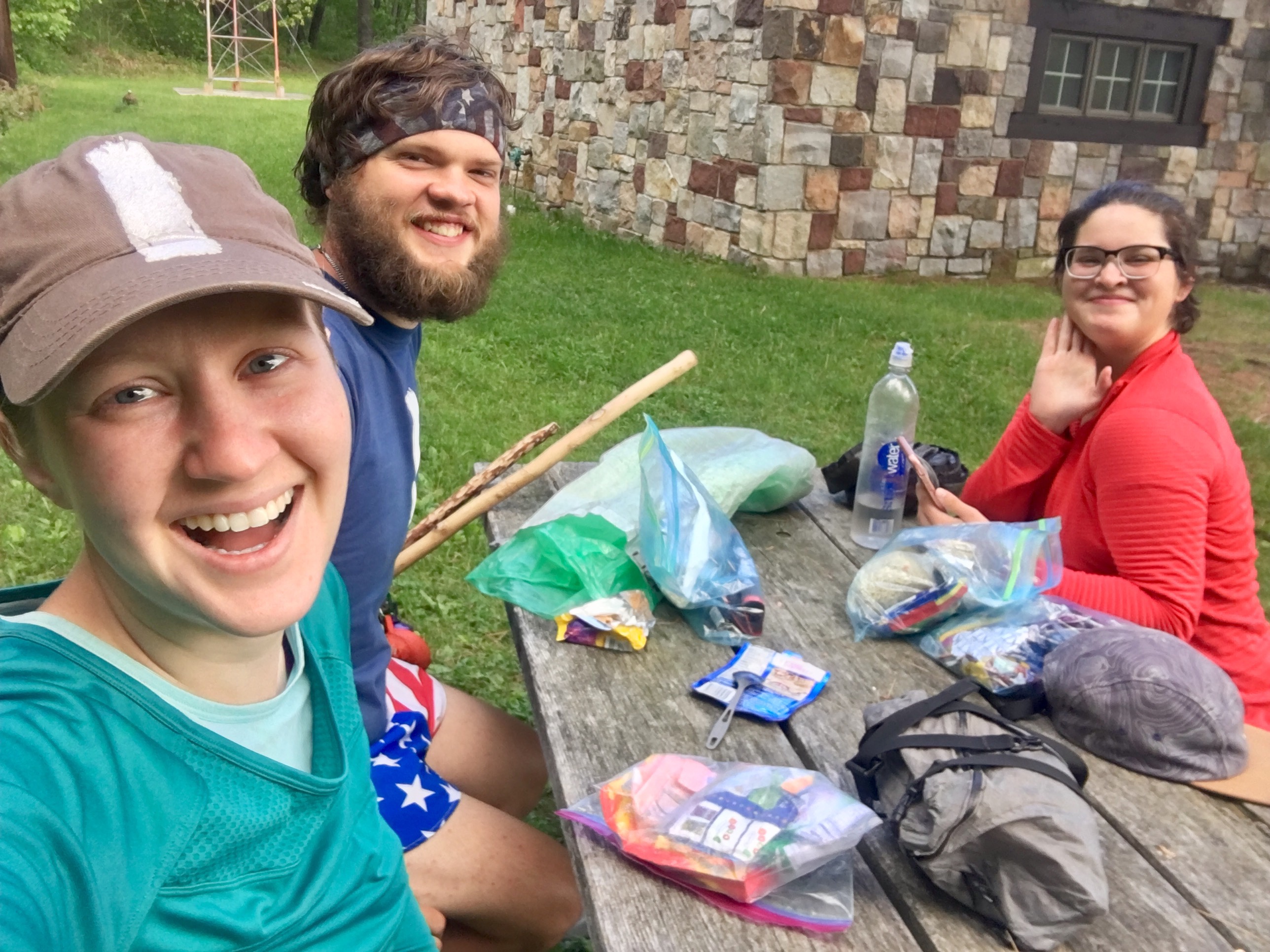 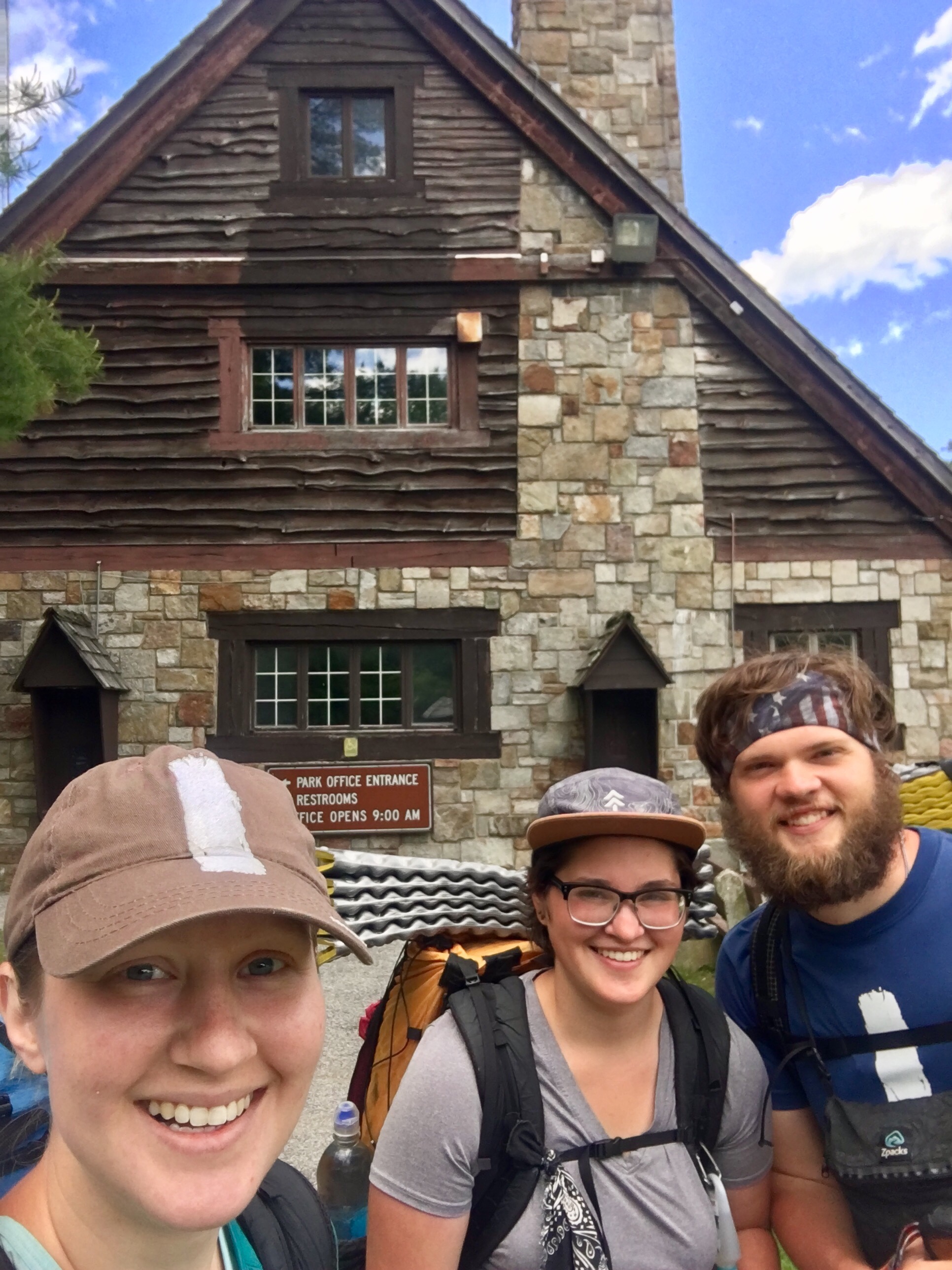 We continued on and climbed a short wooden observation tower to find an awesome view of a huge tower to mark the highest point in New Jersey. The rest of the early afternoon hike consisted of intermittent fields, planks over marshes, and road walking. 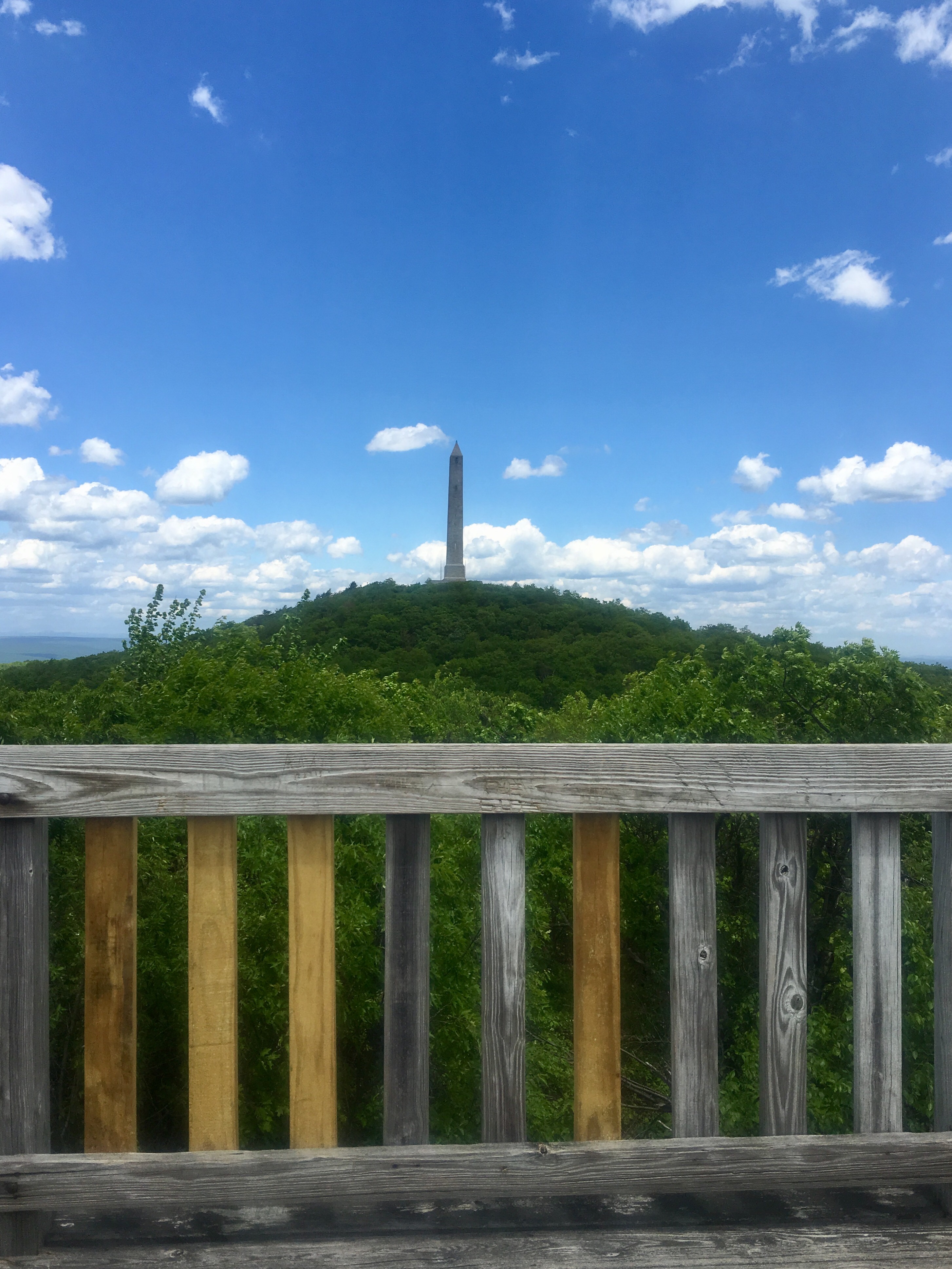 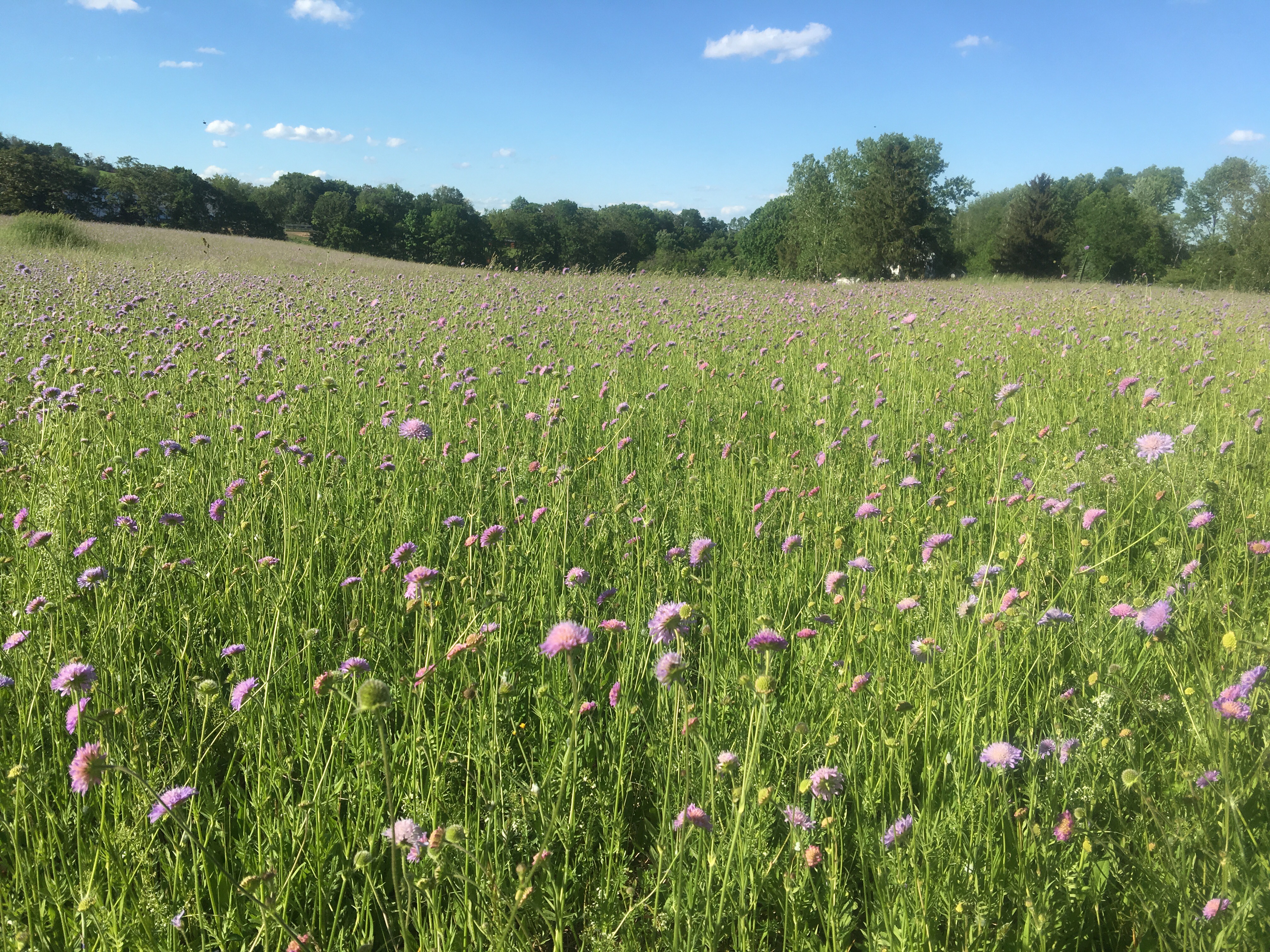 We walked on the road for a while until our feet were killing us. We then walked in a rectangle around what looked like a man-made swamp area with tons of birds. We saw crows, red winged blackbirds, catbirds, mallards, and Canadian geese. 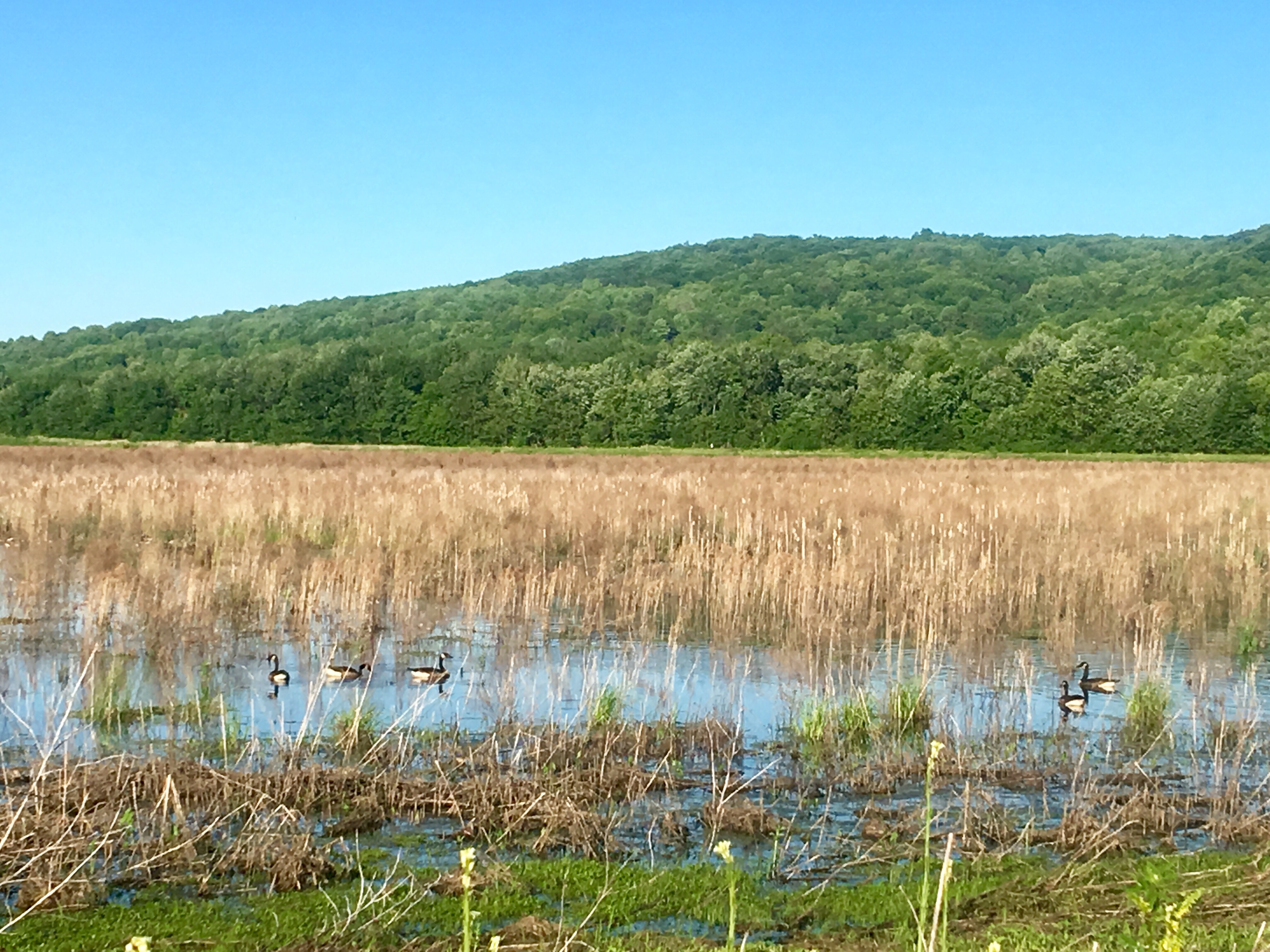 Geese in the swamp

The last climb before the shelter was painfully steep. We stopped to get water at an abandoned house on state property where they let hikers use the outside spigot since the shelter was dry. The creepy, empty house was described in the Guthooks comments as being an “aspiring crack house”, and the outside was crawling with ticks. We spotted them on the spigot, grass, rocks, and house walls. I only found one crawling on my leg today and thankfully none attached. 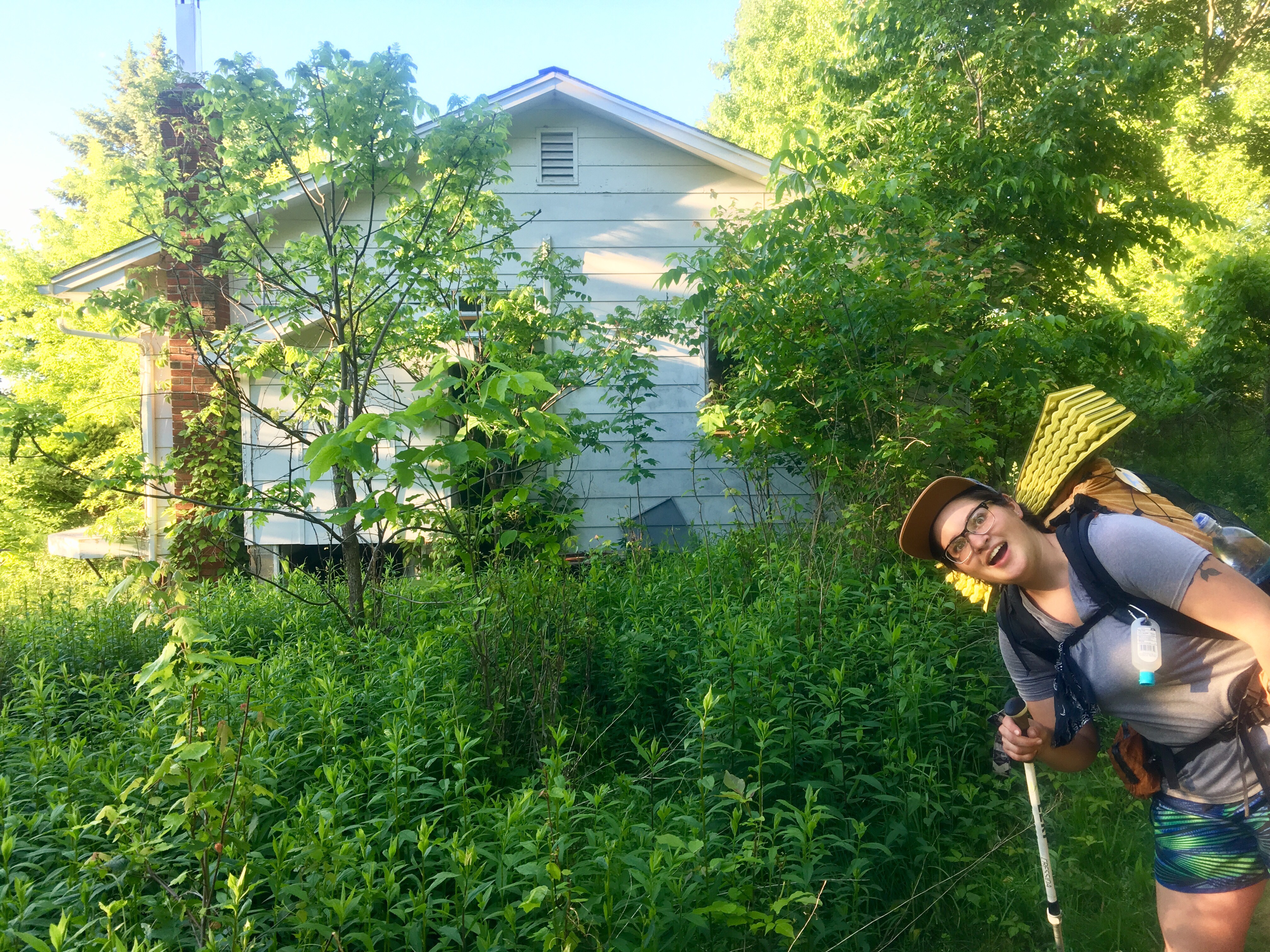 We made the last 0.5 mile to the shelter quickly and set up our hammocks. We met a few day hikers, a thru hiker we met at the visitors center, and Lioness, another thru hiker we dreads we hadn’t met before. Despite lots of people here, the shelter is empty. The moon is not full but it’s bright and will be nice to fall asleep to.

We got up early since we wanted to get on the trail by 7:30. As Rash and I ate breakfast, it started to rain. I checked the weather and the previous 10% chance had increased to 80%. Good thing I wasn’t still sleeping. Towlie and Potato came in late to the previously empty shelter last night, and invited us in to cook breakfast away from the rain.

We got on trail and were cruising up hills and over rocks since today was town day. We came to these huge boardwalks that Rash and Piñata were talking about yesterday. The views of the marsh were outstanding, and the weather was perfect. Red winged black birds were everywhere, and took to flying directly in front of us with their red patches showing. 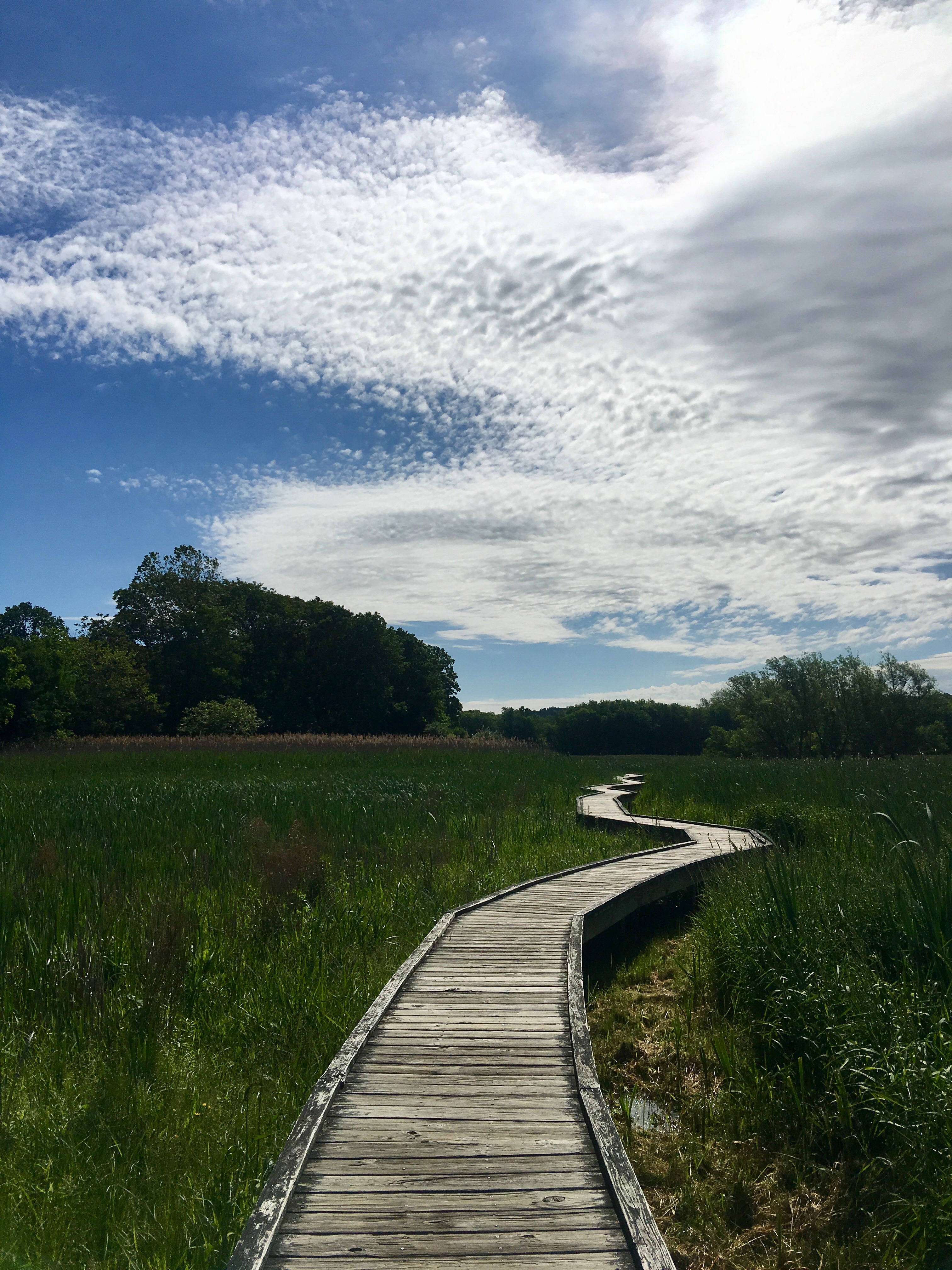 Boardwalks winding through the marsh 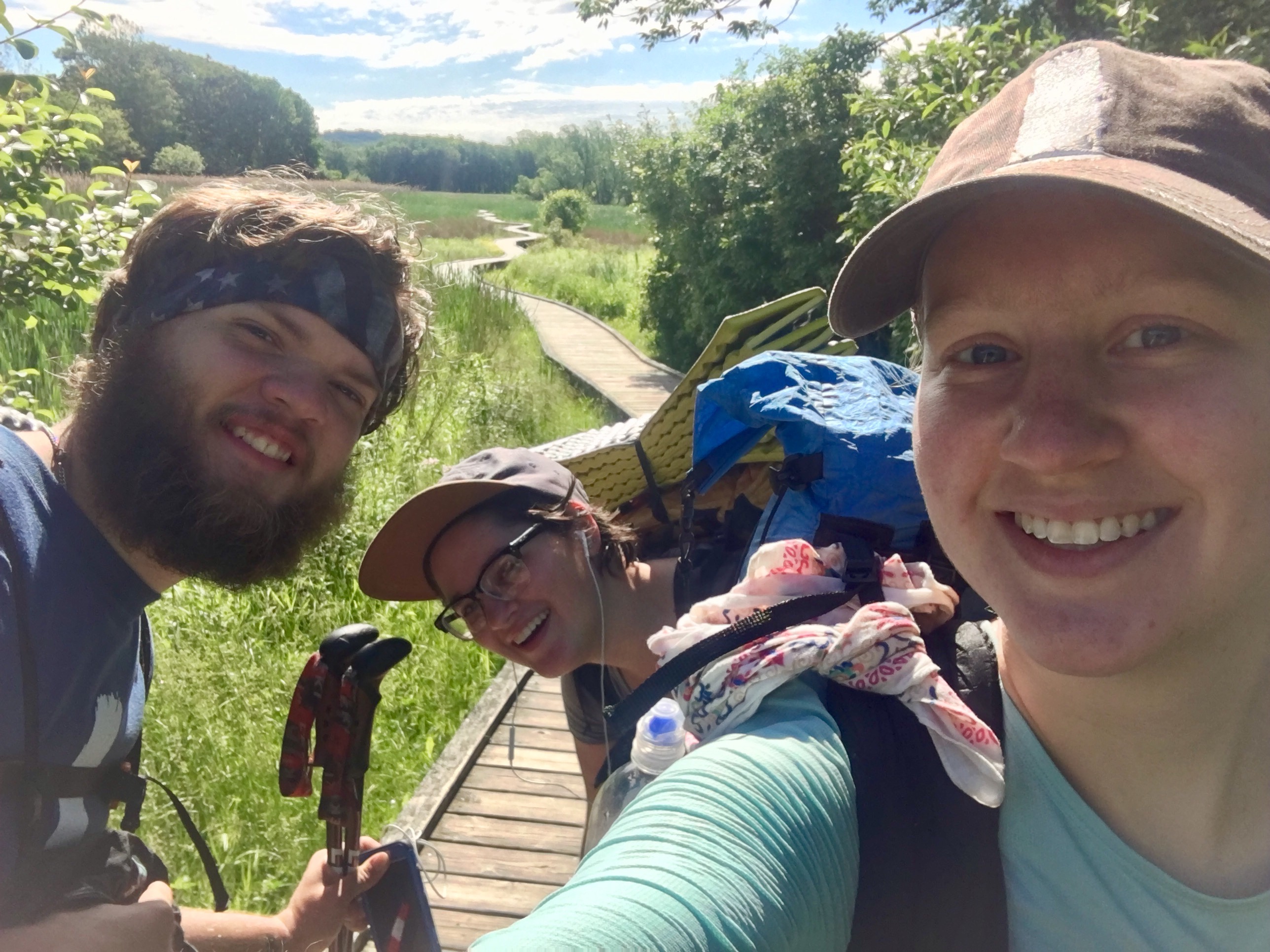 Selfie with the boardwalk

We had one big climb to do, and it was difficult. We haven’t had significant climbs since before Virginia, and this was just shy of 1,000 feet. The path was well marked, though, and it was crawling with day hikers. We stopped at a stream to fill up with water, and I thought we were near the top. Guthooks disappointingly showed me we were halfway. When we made it to the top, we found a huge rock pile and walked the short walk to the summit. 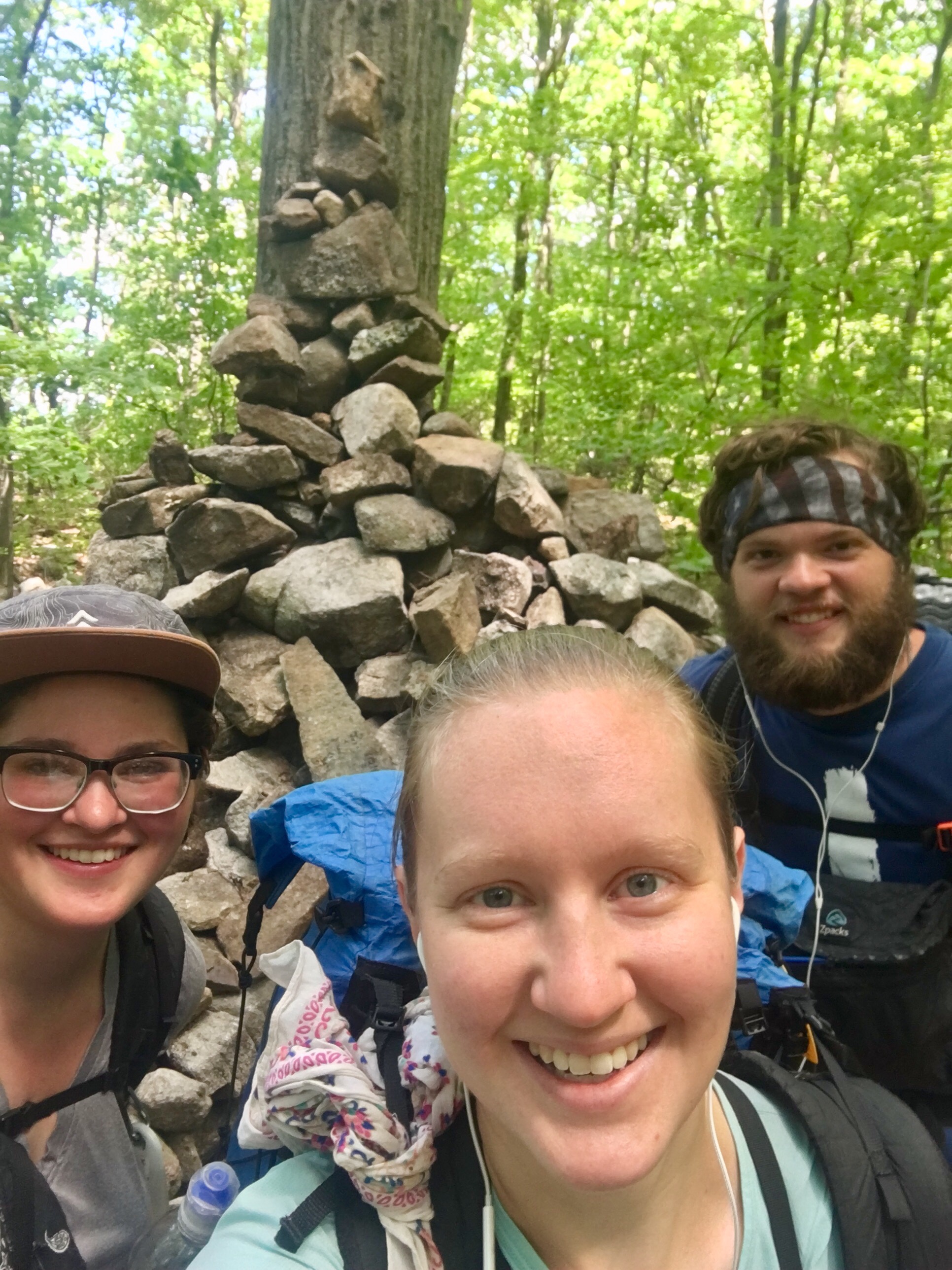 The rest of the day went smoothly. We were only doing 12 miles today, so we got to the turnpike a little after 1. We planned to hitch the ~3 miles into the grocery store and the motel. I wanted to get a picture of us hitchhiking, but we were almost immediately picked up. Our ride was a very sweet girl in her 20’s named Michelle who lives nearby and does day hiking herself. She brought us to the grocery store and offered us money. We were a little stunned (who gives someone a ride and then offers them money? Shouldn’t we be offering her money?), and politely declined. We’re still new at the hitchhiking game.

The grocery store, Shop Rite, was similar to Kroger and was packed with shoppers. I forgot it was Saturday. I was a little stressed being around huge crowds of people, and the noise level was getting to me. We got everything we needed/wanted, including a 3 pack of caramel Magnum bars I shared with Rash and Piñata. I got sushi for lunch and a salad for dinner at the grocery store. We hurriedly packed up since it was 2:30 and I needed to pick up my socks at the post office by 4.

We were still nervous about getting a hitch to the motel, which was still a few miles away. We shouldn’t have been. Within 30 seconds, a BMW convertible stopped for us, and at the same time another car going the other way shouted, asking where we were headed. We loaded up in the lady’s convertible, who said she was “an old hippie” and used to hike the John Muir trail. 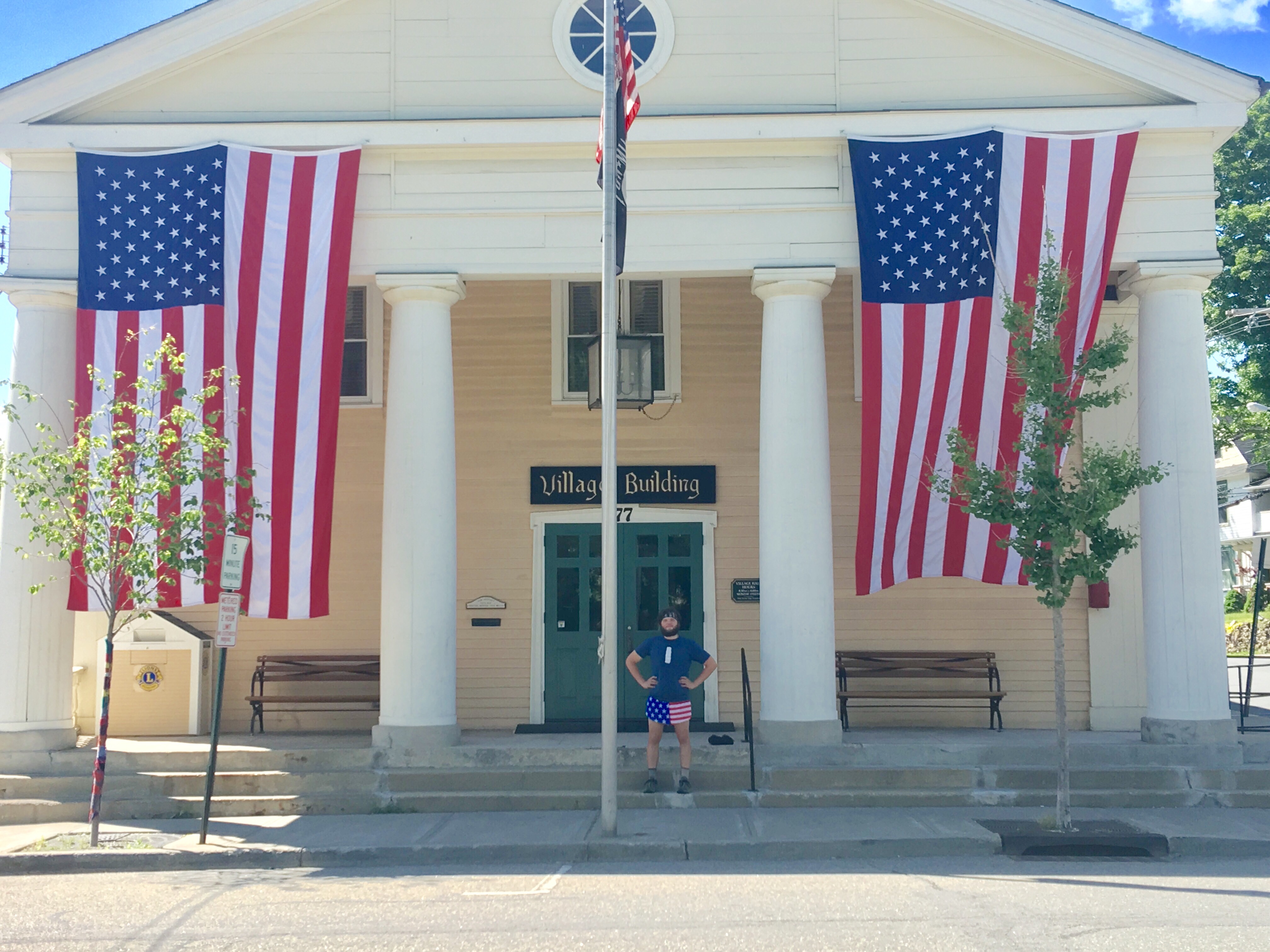 On the way back, we stopped by CVS and Rash got Piñata and him more bug spray. I got a 40% off coupon during my first checkout, so I went back and got a packet of beef jerky. While we were waiting in line the second time, a few men in leather jackets were behind us. One of them asked if we were thru hiking, and said he SOBOed 2 years ago. He was planning a cross country trip on his motorcycle.

We got back to the hotel and spent the rest of the evening eating and watching TV. I spent a while on the phone catching up with Louis. 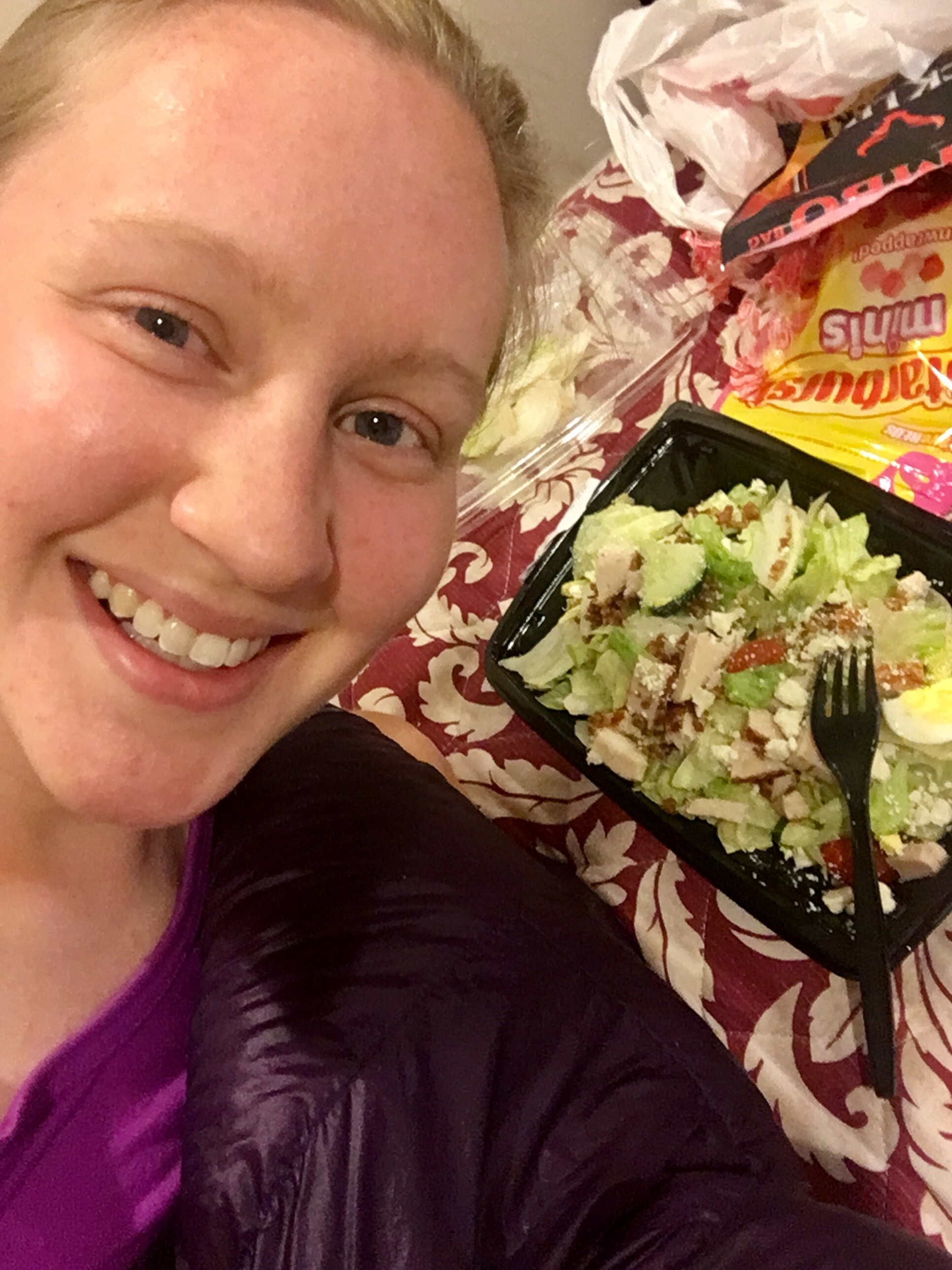 My salad for dinner

We drug our feet getting out of the hotel this morning. When we finally got on the road, walking towards the busy road to get a hitch, it was 10am. I dropped off a few letters in the mailbox we had seen coming back from the post office yesterday. 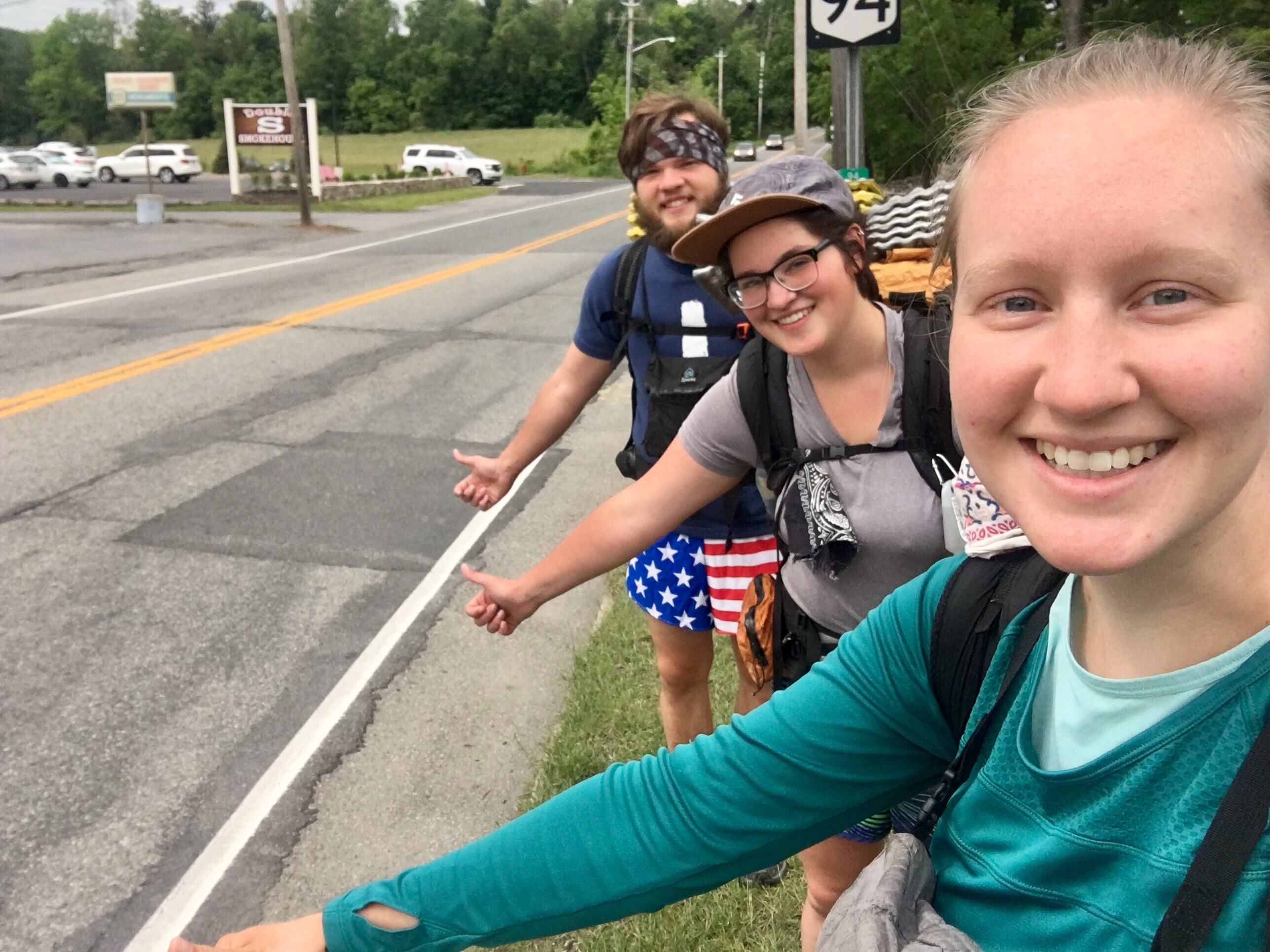 Hitchhiking to the trailhead

At the busy intersection, it took less than a minute to get a hitch to the trailhead. A teacher named Allie graciously picked us up. Hiking this morning went slowly. We couldn’t find motivation and kept stopping for breaks. Crossing a road, we found a bike race going on. They didn’t close the roads, and a few cars behind the cyclists were honking incessantly.

Even though it was sunny this morning, the forecast looked ominous for the next few days with nearly constant rain and thunderstorms. The rain started a bit later than it was calling for, and it was raining moderately by noon. I was tired and grumpy, which made hiking no fun. We were crossing large rock formations that normally wouldn’t have been a problem walking over, but the rain made even the tamest rocks a near death, slippery experience. We saw Waldon with another male hiker and then we crossed the border into New York. 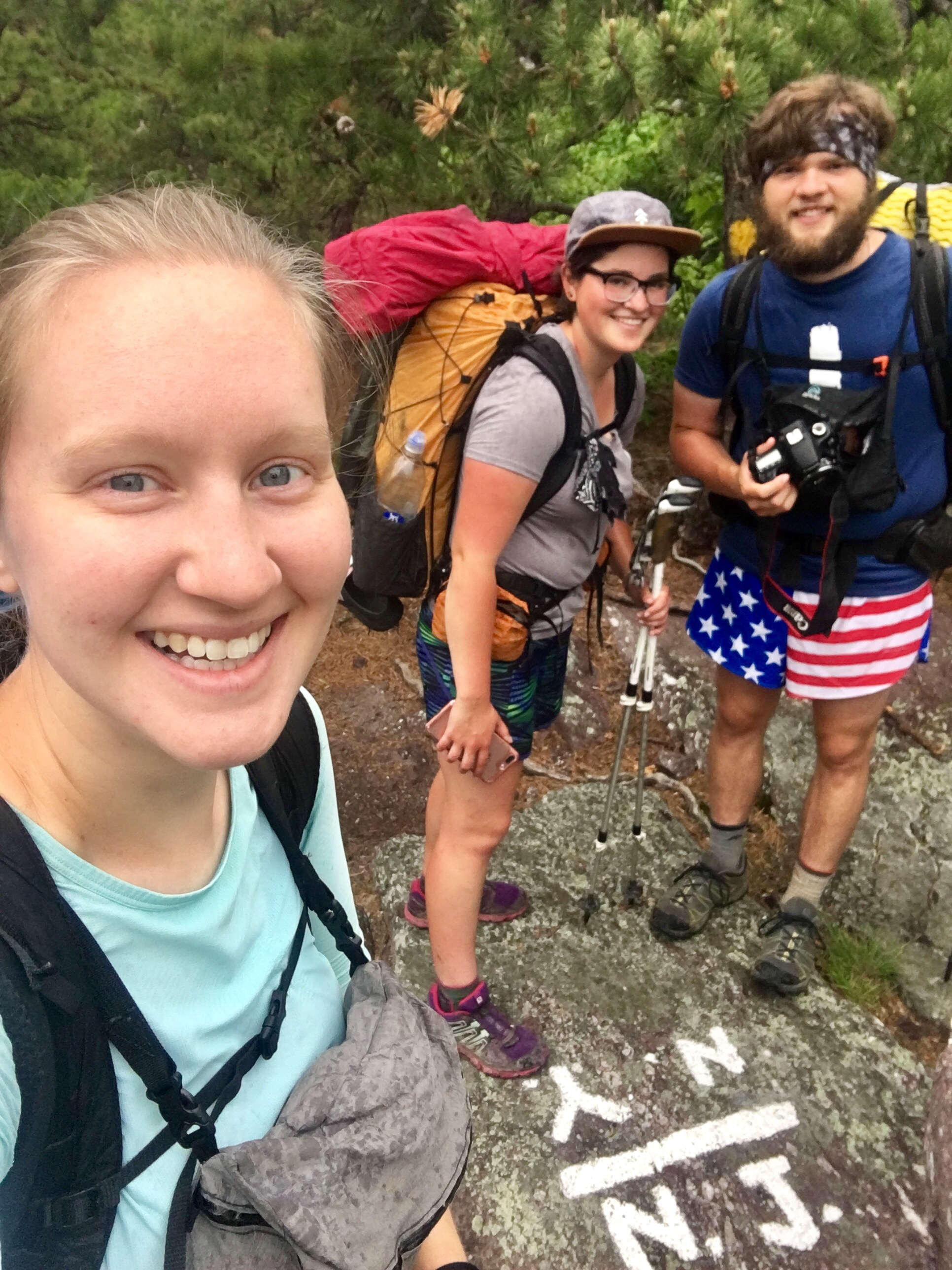 I had reception and briefly called Louis. While we were on the phone, Rash came to a rock formation where you had to scale across a precariously slanted rock holding a slippery crack in the rock for support (just like rock climbing) and then turn and slide down on your butt. Rash slipped and fell, and luckily he didn’t slide off the rock. I started scaling across, but I felt like I was going to slip and fall. I felt a little panicky, so I bailed and went back to the start to find another way around. Piñata and I had already thrown out poles halfway down the rock, so Rash handed me a huge tree branch and I swept them down the rest of the way.

Shortly after, we came to an American flag that used a branch for the pole and was grounded by anchors to stay up. I’d seen pictures of it before in other thru hikers pictures, and it was cool to see in person. In the distance there was a huge city skyline, and we were pretty sure it was New York City. 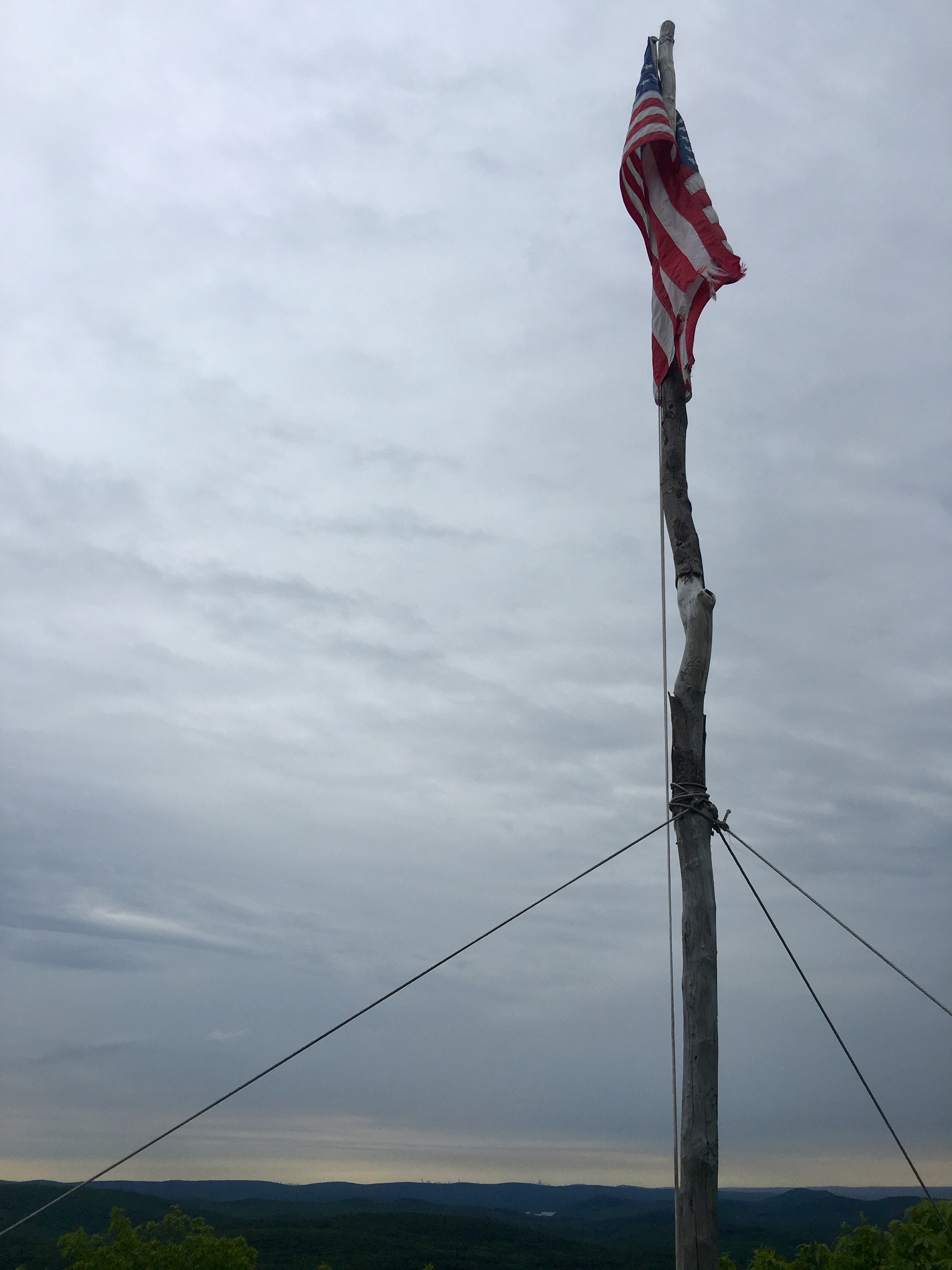 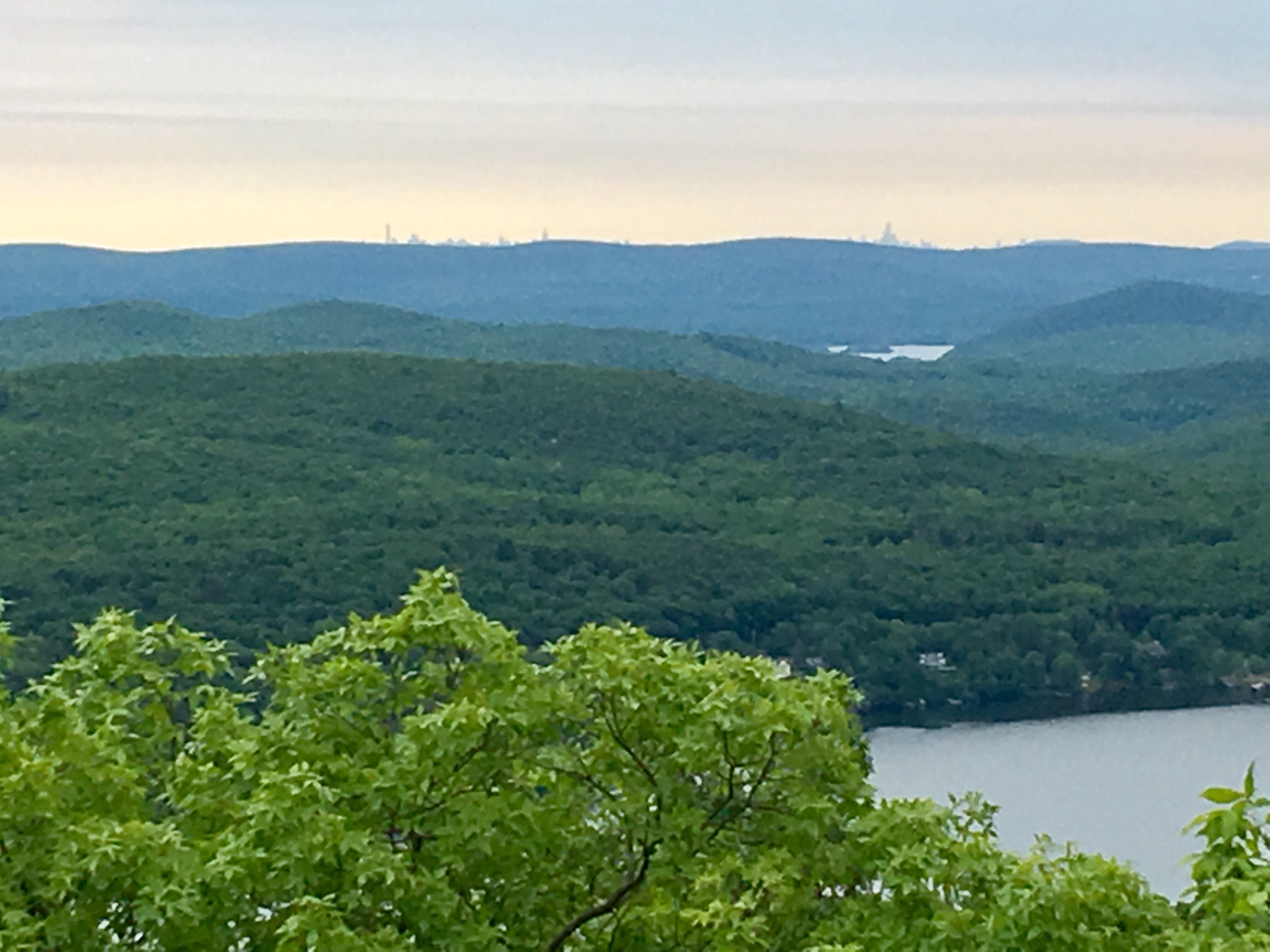 The rain was persistent, and it made the rest of the day challenging. We had a section of climbing on rebar ladders in the rock face. The rebar felt a little wobbly, and I was a little nervous going up. 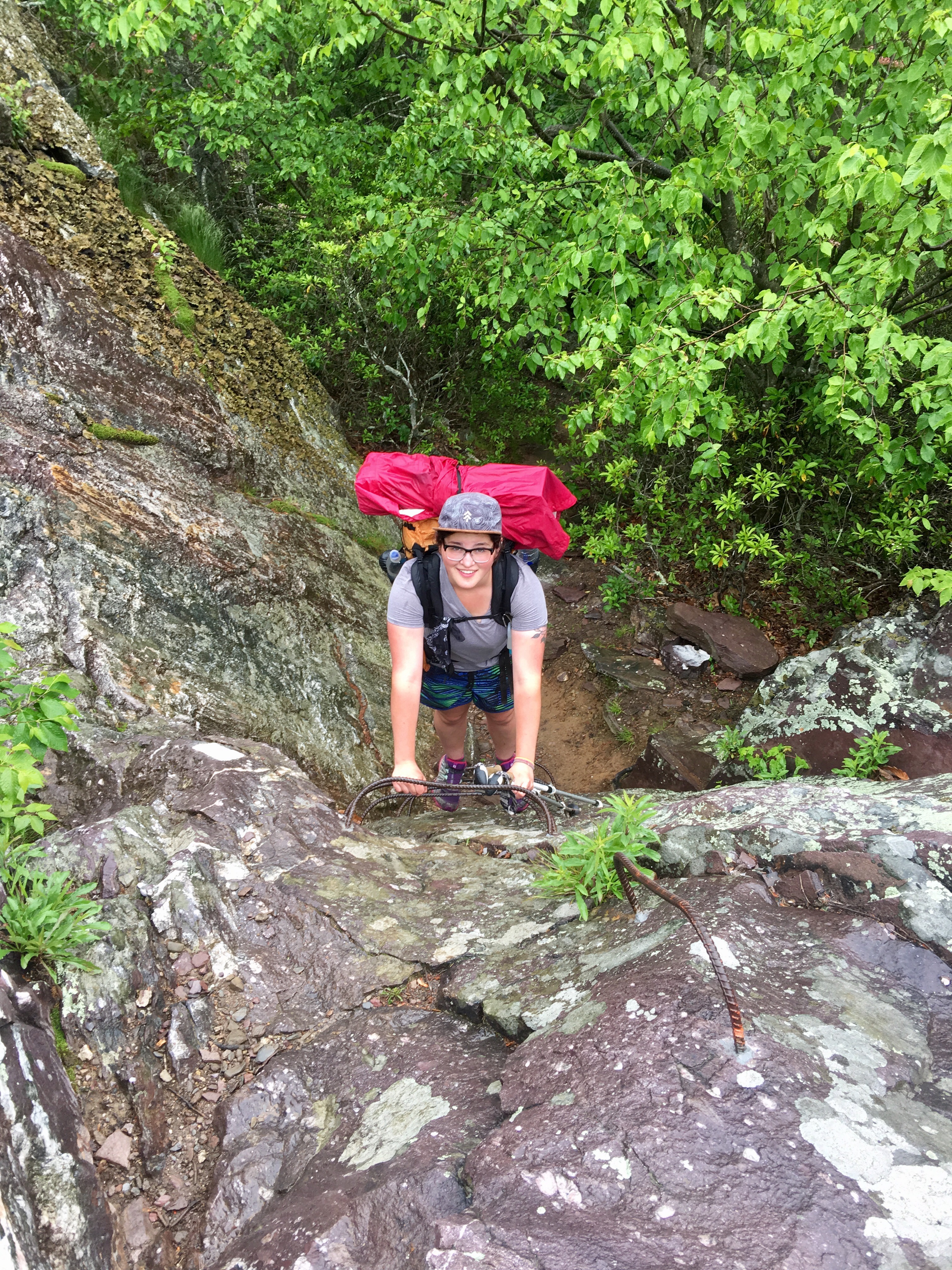 Piñata smiling as she climbs the wobbly rebar ladder

We originally planned to camp after 18 miles. We weren’t moving fast enough over the rocks to make it before dark, so we changed our plans. Stopping at the shelter would only give us 12 miles, so we decided to try for 16-17 and hitch into town to spend the night in a hotel. Even though we were just in a hotel last night, we were wet and tired, and really, really wanted hot showers. 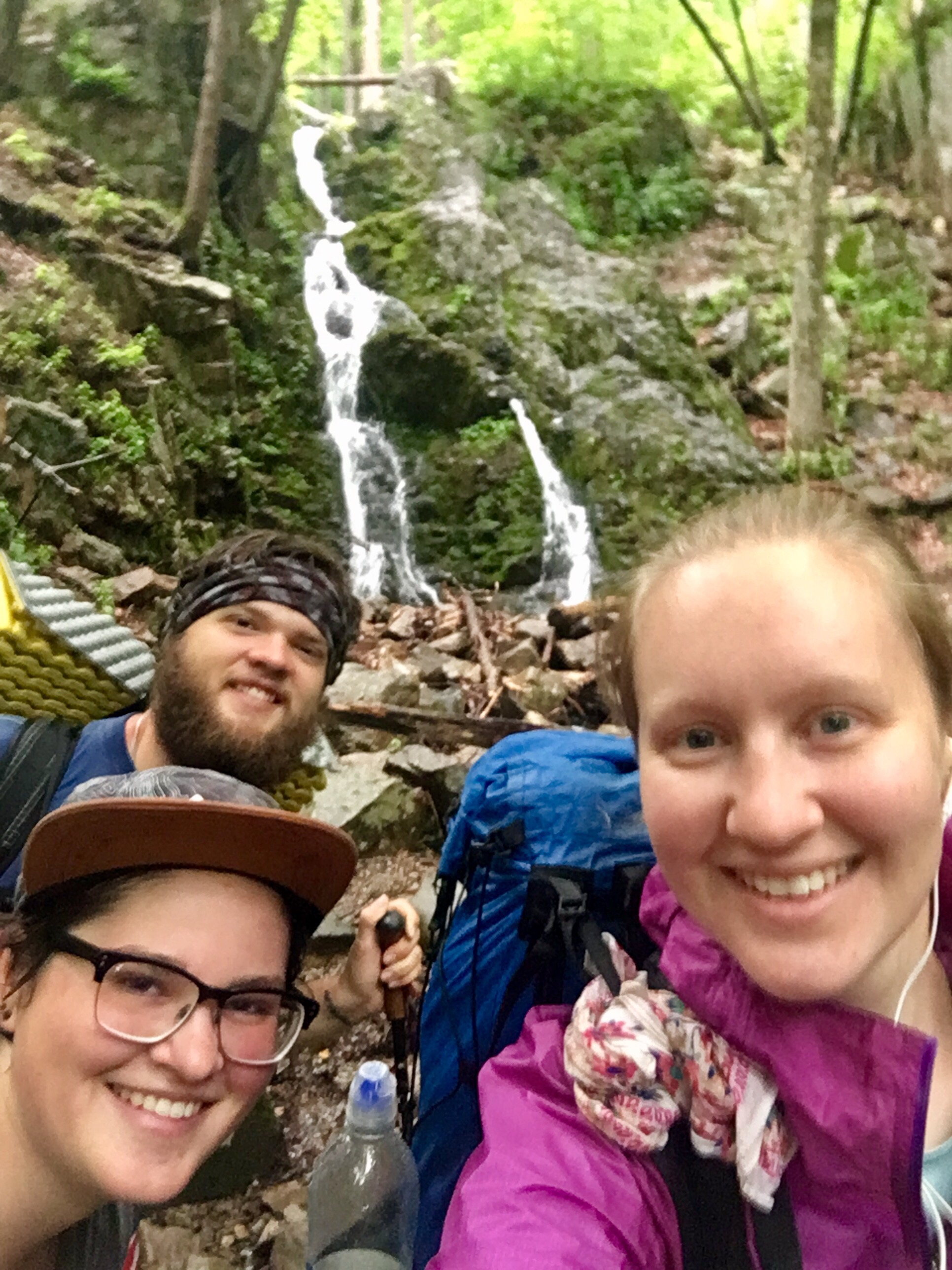 Hitchhiking yesterday was a breeze. We didn’t anticipate how sparsely populated this road would be on a Sunday night. Yesterday we got picked up immediately, and today we were hitching for 15 minutes before a middle aged gentleman named Rob stopped. He said he could take us to the main road where we could get a better hitch to the motel, but we struck up a conversation, and he graciously took us the extra mile to our hotel. He said it was only 5 minutes out of his way, but after standing on the side of the road for 15 minutes wondering if we’d be there all night, it meant the world to us.

We arrived at the hotel, checked in, and ordered Chinese food. We watched tv and turned in early, ready for another rainy day tomorrow.