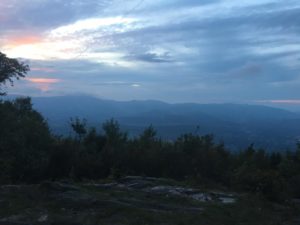 The two sisters were slack packing the next day so we got up super early to hit the trail. We said goodbye at the trail head in case we didn’t see one another again. It was good that we did because within minutes the full weight of my pack slowed me down while they bounced up the hill. I stopped at the first shelter I came across for a break and was met by a group of four more slack packers slacking all the way to New York. Had I missed the slack pack memo? They said I was welcome to share a room with them if I got to town in the evening, but it would be too many miles. I was feeling my pack especially today and the weather forecast for the next two days predicted rain 24/7. I cut my day early at a shelter so my gear would remain dry if the rain started that evening. There were three long trailers who’d just started in the shelter. They were nice boys but definitely just novice. I hit the hay hoping that the weather would be more agreeable than predicted the next day.

I was very happy I was in the shelter that night because it started raining very early in the morning. I mixed a coffee with a hot chocolate and slowly packed up hoping the rain would slow down. It hadn’t stopped completely when I started but within a half hour it was just the leaves dripping. In a few short miles I reached the sign I had been waiting for; I had entered Massachusetts! It was glum outside but I didn’t care because I had passed into another state. It was a mile or so later when a random rock scramble appeared and I struggled not to fall on the slippery slanted rocks. Unfortunately, even if you are careful you can still fall and I did. I was fine except my finger was in a lot of pain because I had landed on it funny. I headed downhill resolved that I would go to the oriental buffet because I needed a pick me up after that. I ran into a day hiker who offered me a ride to the buffet (only a half mile off the trail but I’ll take any ride). She was nice and studying to be a naturalist which I thought was super cool. After being dropped off I ate a butt load of Chinese food and walked back to the trail. As usual I forgot how hard walking up hill is after a big meal and I didn’t feel my greatest. I got to the shelter after dark but luckily there were only two other girls there and I’d met them at another shelter (they were doing a section of AT). They were eating burritos and offered me their leftovers so I didn’t have to cook that night. Their burritos featured chicken of the woods (a mushroom you can forge for) and it was quite good. I made a makeshift brace for my finger because it was still hurting and fell asleep. 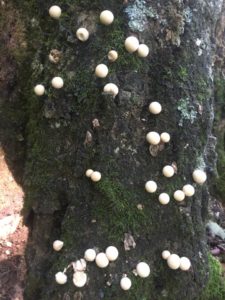 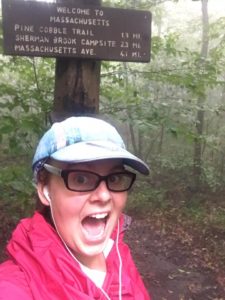 It rained throughout the early morning and I was happy to stay dry for the second night in a row. It stopped raining so up the trail I went. The next Mountain: Mt. Greylock which was kicking my butt. It was a complete whiteout when I got on top and even if it had been clear they were doing construction on the tower. I headed over to the lodge where I ate some chowder and a burger. I decided to pay for a five dollar shower as well because the humidity intensified and I sweat buckets. It was nice chilling up there for awhile but eventually I had to go outside and continue hiking. It was a long way down but I passed though some beautiful fields at the bottom, before entering Cheshire. I headed to Saint Marry’s Church where they let hikers sleep. It was a big hall and only four of us were there. I walked to Dunkin Donuts and dined with another hiker, and we bought some ice cream to share with everyone later. It was nice having a place to sleep but because we had light (that wasn’t our headlight) It was easy to stay up really late and loose track of time and I ended up sleeping poorly. 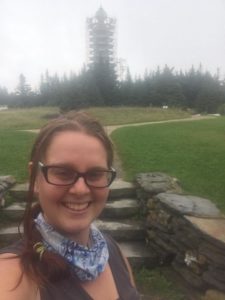 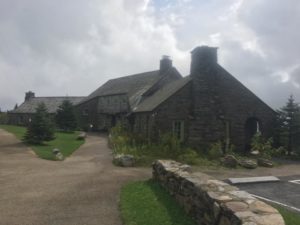 I went to the post office first thing in the morning to pick up a mail drop including some warmer gear for winter (fleece, leggings, long shirt). After packing my now heavier bag I headed out the door. It was a very hot day out. After a little bit I came to a wonderful view of Greylock, Cheshire, and a pond. I continued on past some more ponds until I reached the town of Dalton. I got a milk shake in town and then headed to the gas station to grab some short term resupply items. I was heading out of town when a dude offered me a beer. I took him up on the offer and he told me he saw a lot of AT hikers camped in his neighbors lawn. It was getting late so I headed over to his neighbor Tom’s and asked if I could camp in his backyard. He told me I could as long as I was quiet and followed a few ground rules. A guy named Otter was there (I’d last seen him in Maine) and we hung out on the porch for awhile before heading to sleep. 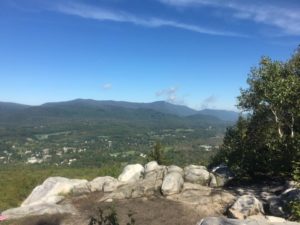 I woke up to another beautiful day and after hitting up the gas station for coffee I began hiking. After the initial hill the terrain was super easy and flat. I stopped at a nice view point where I could see Greylock in the distance. In my guidebook there was a mention of a “Cookie Lady”. I found her house just a few feet from the trail and no one was there initially but when she appeared I was handed some cookies (which were delicious). I headed to the shelter I planned to stay for the night and there were three other guys there when I arrived. One of the men had been living on the trail for a year and had obviously forgotten manners because he made some sexist comments about how he was surprised big girls could hike and called them Otter fat. I tried telling him that he was being rude but he didn’t get it so I just ignored him and wrote out my annoyance in the log book before falling asleep.

I had a short day planned because for the past two weeks everyone’s been telling me that I have to go to Upper Goose Pond Cabin. I had initially heard about the cabin the day after I’d gone up Mt Katahdin. The cabin is next to a beautiful pond and serves free pancakes and coffee in the morning. The walk there was pretty leisurely. I’ve been enjoying Massachusetts a lot because the forest here is beautiful with cute hills and beautiful beaver ponds peaking out between the trees. The leaves crunch as you walk because fall is finally here and the leaves on the trees are slowly starting to change. I’ve also been enjoying the cooler weather. While I was on my first break eating a cliff bar near a stream I heard a noise and looked behind me. About thirty feet away a bear was peacefully walking towards the stream. I almost did a double take because I hadn’t seen one since Virginia but I exclaimed “Oh My God” and stood up. The bear looked at me and then ran extremely fast in the opposite direction. After the excitement I continued on passing above the Mass Pike and finally getting to the half mile side trail that went to the special cabin. It was a big red cabin with two floors. The bunks on the top floor had mattresses so I didn’t have to blow mine up tonight. The bottom floor had a sitting room and kitchen. My favorite thing about the cabin was the rocking chairs on the porch (you really appreciate a good seat after waking 1700 miles). I went and hung out at the dock where I went for a swim. The water wasn’t too cold and it was super refreshing and possibly my last swim this year. I felt clean and hung all my cloths to dry. They have canoes for use at the cabin and so another hiker joins me for a a very relaxing boat ride. I cooked some couscous and then fell asleep extremely early after enjoying a wonderful day. 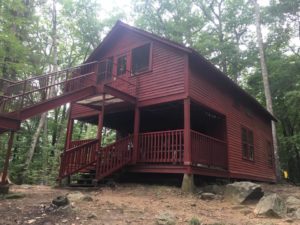 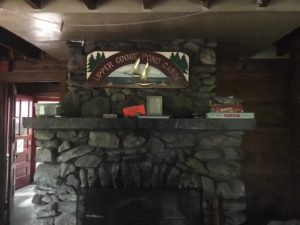 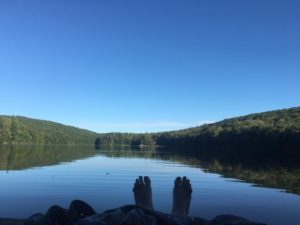 I enjoyed 3 cups of coffee the next morning and a bunch of pancakes. I hung out in a rocking chair awhile until it was time to leave. The walking was similar to the past few days and I could walk a lot faster if I hadn’t overdosed on pancakes! There weren’t many views but the grassy tops of mountains felt peaceful and I was glad to be in the trees. I was in my head earlier in the day and accidentally fell face forward and hurt my thumb. Later in the day I had a view at a place called the “cobbles” which opened up to what would be a beautiful view if it hadn’t faced a large graveyard below. I headed down to the campsite grabbing water on the way(I’d run out completely). It was just getting dark when I arrived, but no one else was there. Luckily there was a bear box (they’ve been at most of the shelters in Massachusetts so far) so I felt no rush as I set up and cooked in the dark. I went to sleep listening to the rustling of leaves and owls hooting right above. 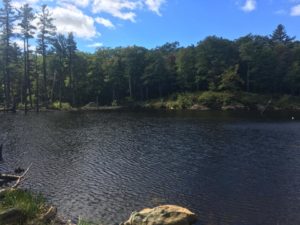 A Much Needed Break

I needed coffee badly the next morning. After I made some I was full of energy and walked five miles before stopping for a short snack break. I passed two more ponds and some cliffs along the way. I was trying to make good time because my parent’s friend Bob has a house half a mile off the trail and I was aiming to get there early. I took a quick lunch and then I was at the road crossing in another hour. Bob came and picked me up and brought me back to his house where I had a warm shower and a beer. He took me to a pizza place for dinner in Great Barrington and I ate a delicious salad (I was super excited about real greens). Now I’m taking a zero at his house because it’s super cool (lots of Windows and a jacuzzi) and my muscles have been begging for some rest for awhile.