As planned I set out from Hanover after enjoying breakfast at Lou’s and hiked to Lincoln, NH.  I learned a few things hiking this section. 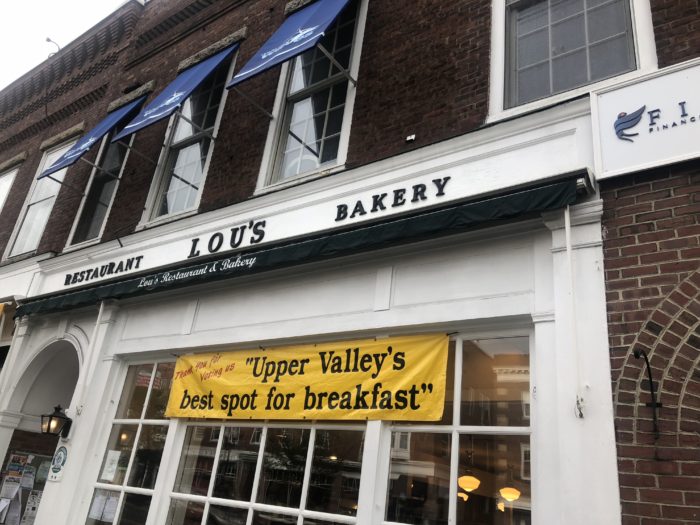 Any hike leaving Hanover has to start at Lou’s, maybe the best breakfast on the trail. 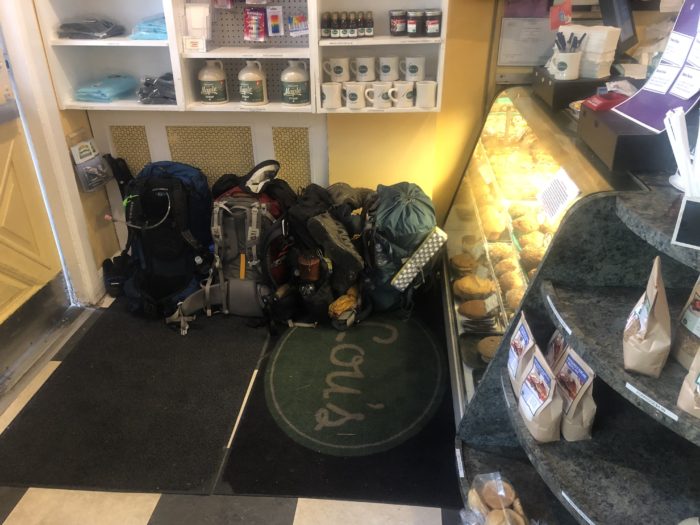 A few of my trail brothers and sisters also enjoyed Lou’s.

On day one, I learned that New Hampshire is a hell of a place to look for your trail legs, but this isn’t my first rodeo.  Since I really didn’t have a tight schedule on this leg, I took my time and hiked shelter to shelter.  While the elevation profiles in New Hampshire have always intimidated me, the harsh reality of huffing my way up them slowed me to a crawl.  If I could have gone back in Professor Peabody’s wayback machine, I would have told myself to get to Gorham before going home last year, but I guess I had my reasons. But decisions have consequences and I felt the weight of them on this hike.  I only hiked more than ten miles on the first day.

On top of a rough transition back to the trail, it rained every day, and for the first time, I had to deal with chafing.  Since I’ve been watching my grandsons, I was intimately aware of several treatment options, but since this hadn’t been an issue through 1,750 miles, I didn’t bring my Monkey Butt cream this time.  Picture me shaking my head and walking like a cowboy.

On top of rain, chafing, and searching for my trail legs, the toenail on the big toe of my left foo, seemed to snap off at the base and as the nail shifted around, a blood blister formed at the base of the nail.   Sounds terrible, but it didn’t hurt all that much.  Stubbing that toe wasn’t exactly a trip to Six Flags, though, and it looked like something you would expect to see only in a zombie apocalypse.  I’ve lost this toenail every section.  Why should this one be different?  First day though… 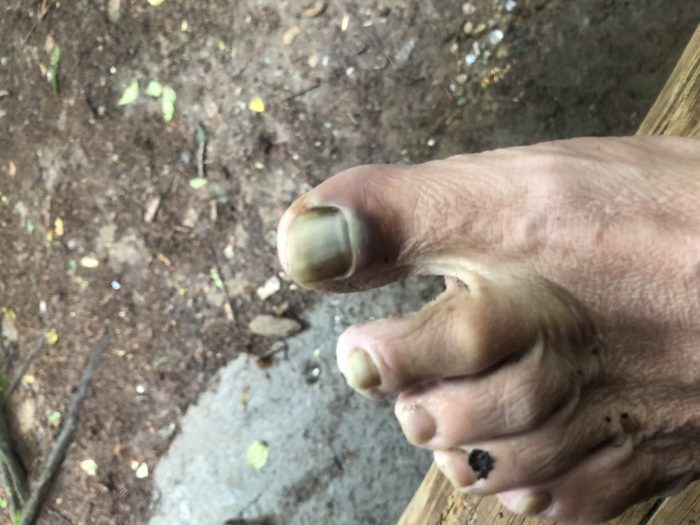 While I spent a lot of time walking through the green tunnel, the vistas from the peaks were breathtaking. 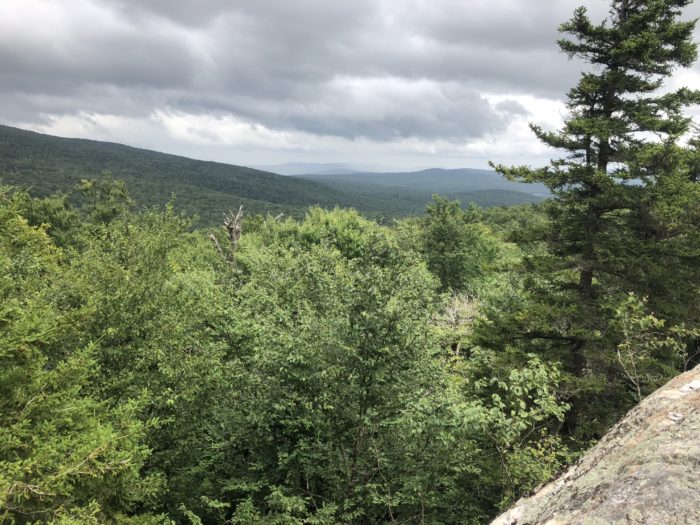 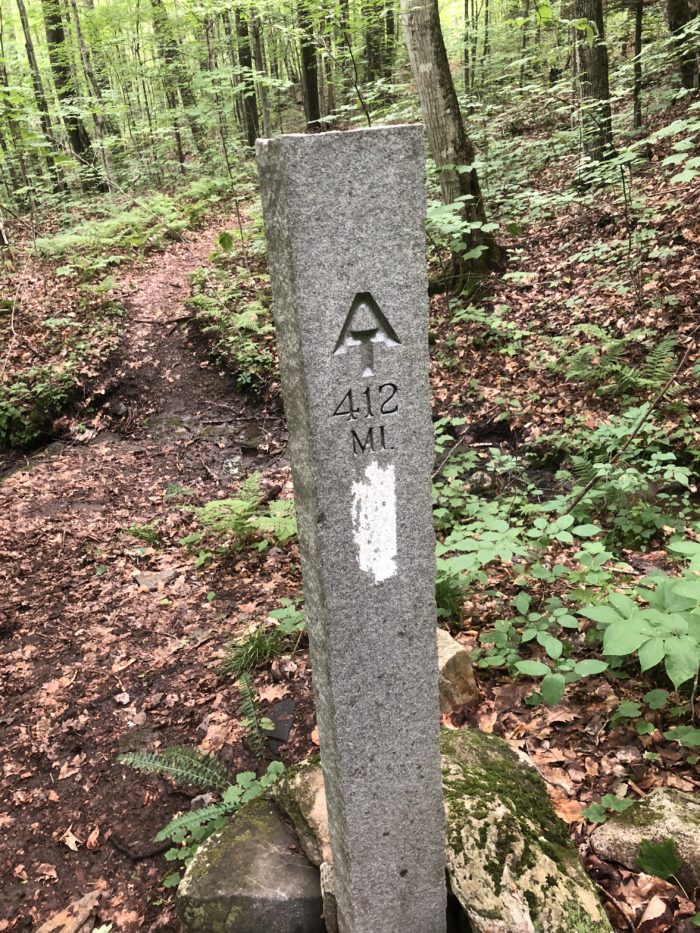 Closer than I’ve ever been… 412 miles to Katahdin.

After walking in the rain for days, I decided to go into the Hikers Welcome Hostel to dry out. There I took advantage of the opportunity to slackpack over Moosilauke.  The hostel shuttles you to Kinsman Notch and you walk back to the hostel.  The almost vertical trail up the notch parallels a stream.  Frequent waterfalls enrich the trail and the gurgling sound of moving water fills the air. 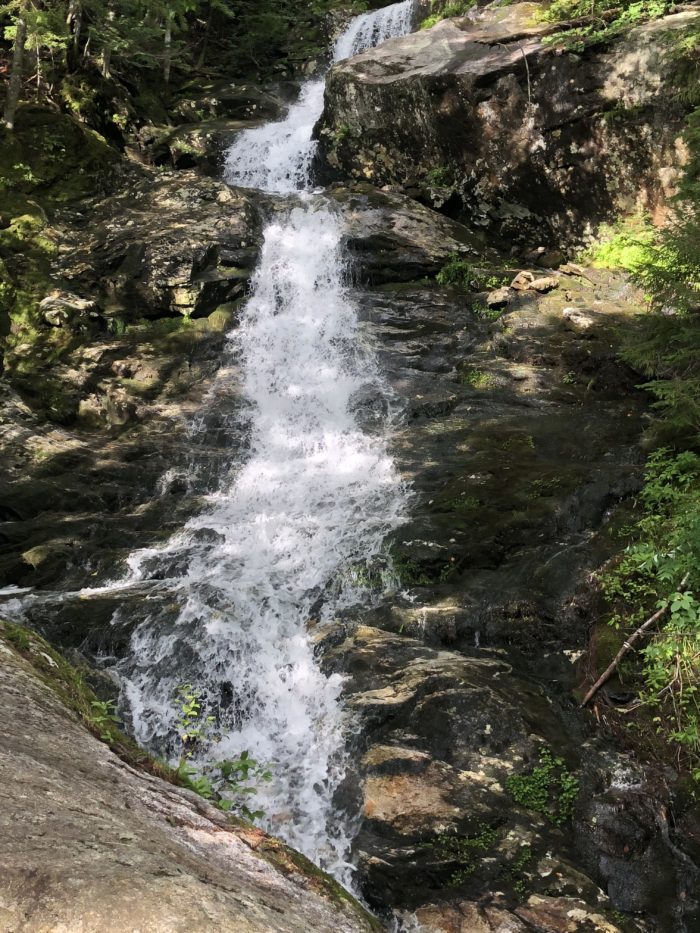 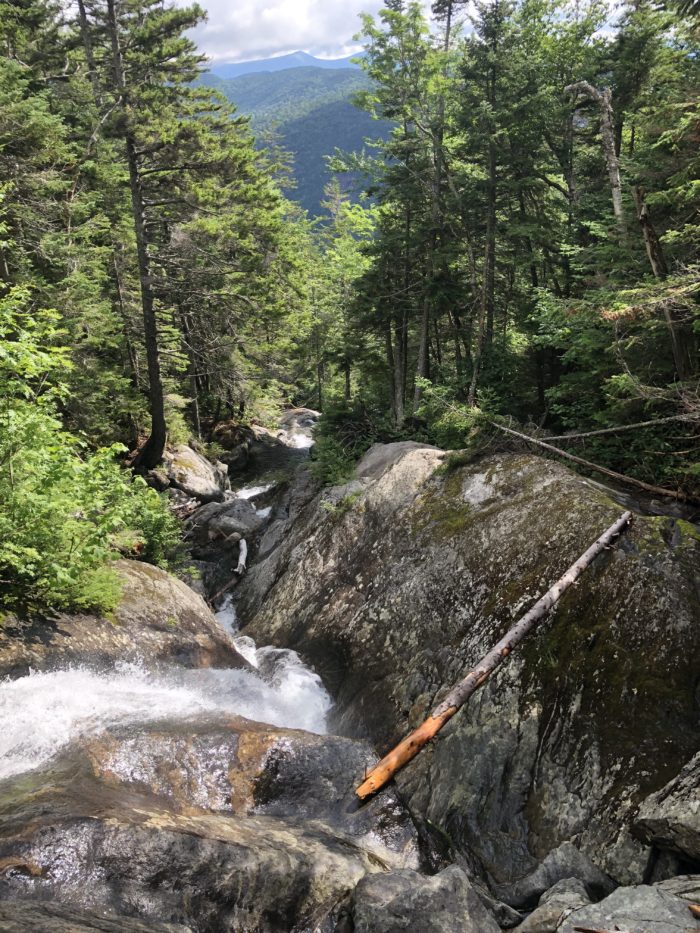 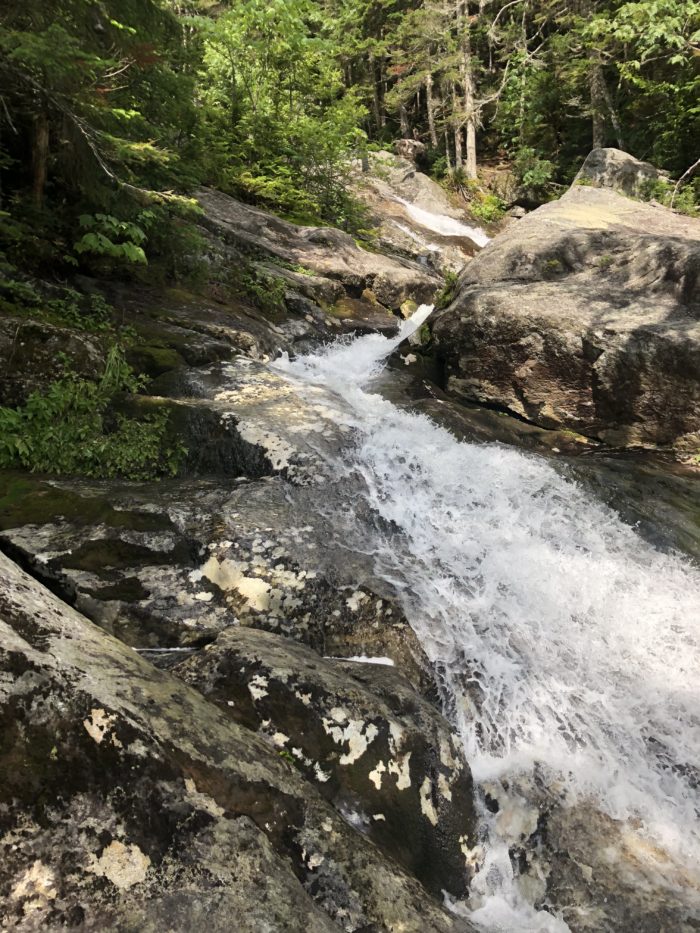 When I got the top of Moosilauke, I was walking in the clouds.  There were scads of people there.  I stopped for lunch, and while I munched on my tuna wrap, the clouds burned off. 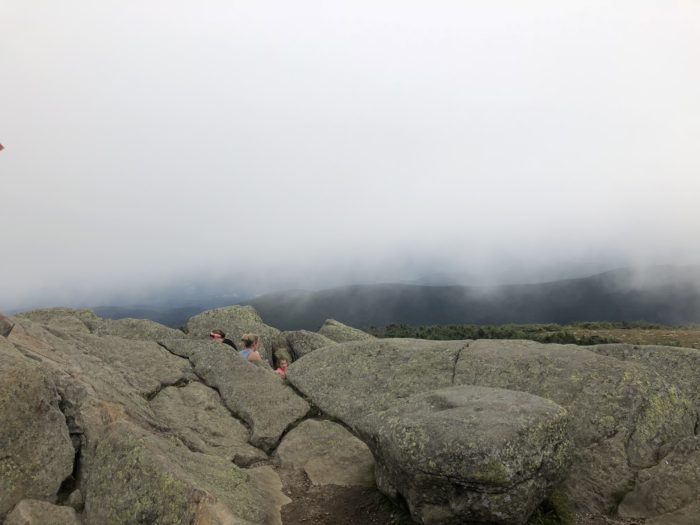 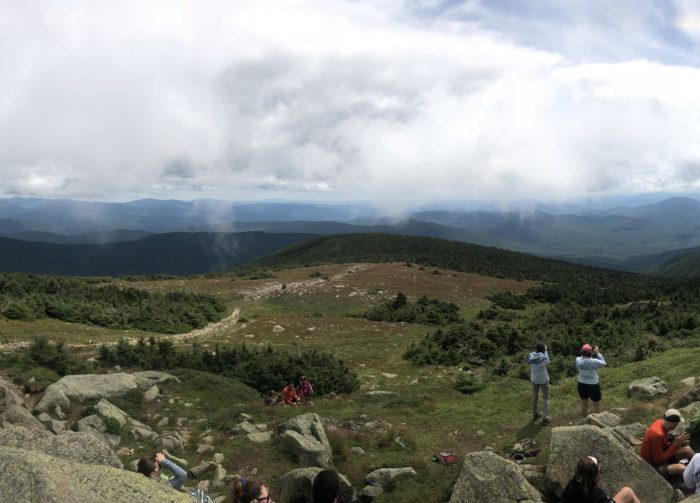 Every afternoon at Hikers Welcome, they phone in burger orders to a local restaurant.  I will confess that I spent a lot of time that morning thinking about my burger order.  That afternoon it became clear I wasn’t going to make it in time for the burger run.  Since I also hadn’t had time to dry out my gear, I decided to take a zero at the hostel to take care of business.  I was enjoying the company there.  It was a nice mix of NOBOs and SOBOs.  I found myself envying the hikes that the southbounders had in front of them.  Together we had hiked the whole trail.  They had the part of the trail I’d experienced and loved ahead of them, while had the intimidating unknown was in front of me.

On my zero, I enjoyed the company of a couple of guys who hiked with Earl Shaffer through Rocksylvania on his last thru-hike in 1998.  There  trail names were Tricks and Uncle Walt.  Tricks told this hysterical story.  They were descending into Delaware Water Gap.  Earl was looking forward to a relaxing evening, but was a bit apprehensive about folks having other plans for him in Delaware Water Gap.  They met up with a young hiker who told them that a bunch of people were hanging out at the gap hoping to talk to some geezer who was walking the trail, not realizing that the geezer they were excited about meeting was one of the guys he was talking to.  Turned out Earl’s fears were totally justified.

Tricks told two things about Earl.  1) He never intended to walk the whole thing in 1948.  He just wanted to walk the Army out of him and honor the memory of a friend he’d lost in the war; 2) He wanted to be remembered more for his poetry rather than his thru-hike.  With that in mind, I include one of poems from Walking With Spring

Jumbled green hills across a wide expanse of      forestland where wild  birds freely sing,       And teeming hordes of new grown foliage dance upon the blithesome zephyr breeze of Spring,

The warbling of a woodthrush far below,             A flicker calling in staccato tone,

These hills were much the same long years ago when first the restless-hearted white man came,

Apologies to Earl about the formatting

I went back to Kinsman Notch with the next morning’s slackpackers and headed up Wolf Mountain.  I hit the Eliza Brook Shelter around dark.  This is only about eight miles from the notch, but one must remember that all miles aren’t created equal. 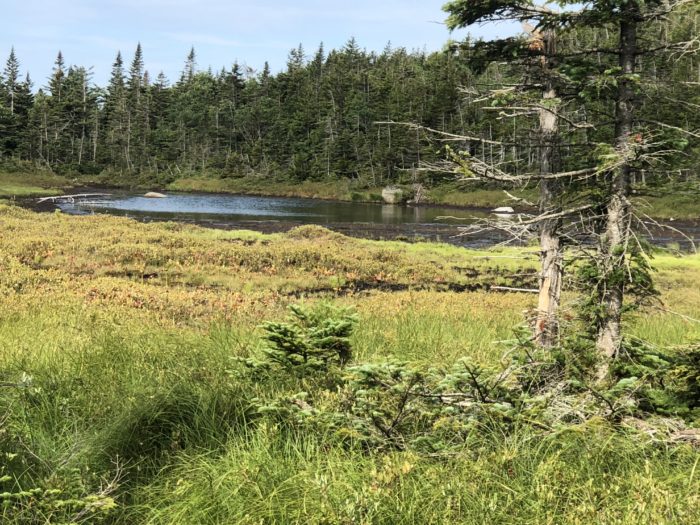 Harriman Pond near the top of Wolf Mountain. 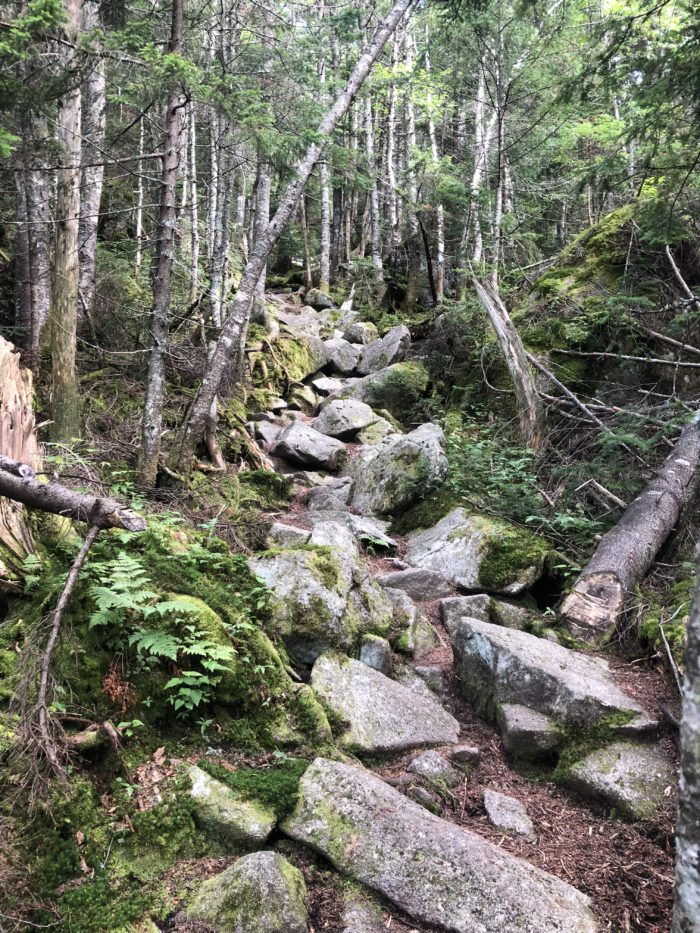 Here is a representative shot of the trail. Uphill or downhill doesn’t really matter. No one is flying down trail like this.

The next day I went over Kinsman.  My son was going to pick me up at a trailhead parking lot off I-93 near Lincoln.  It started to rain.  I slipped and fell on my left shoulder at least three times.  I didn’t get to the road until almost 10 p.m.  My shoulder is messed up and I’m scheduled to see an orthopedist next week.  I fear I’ve torn a rotator cuff again.  At least it’s my left arm this time.  This injury puts my plans in jeopardy.  Since I’ve been through this before, I know it can be fixed, but I also know what a royal pain in the ass making it right again will be if all my fears turn out to be true. The shoulder is improving over time.  A glimmer of hope remains.