So, I’ll be honest with you guys. Blogging before I actually leave for the trail is really, really hard. I’m not climbing mountains yet, I’m not spending all my time in the woods, and I’m not stuck in a position of trying to figure out how to feed myself using only an alcohol stove and a pot of water. Instead, I’m spending a significant portion of my life filling out spreadsheets and wishing there was still daylight hours left after I get off work. (seriously, the sun’s been going down around 5 o’clock, and it’s really really depressing)

But that doesn’t mean I haven’t been getting ready for the trail. In all honesty, my hike isn’t usually far from my mind at any given point in my day, what with shopping for hiking gear, packing up my belongings, and trying to get into what I call trail-shape. This last bit is something I think I can share a few bits of helpful information on, particularly some of the smartphone apps I’ve been using as I prepare for my hike.

Here’s two things you need to know about me. 1. I am a complete an utter nerd. 2. The first one is pretty much it. These apps appeal to me deeply on my nerd level. I get to play with my phone throughout the day and call it “a crucial part of my physical training” and I also get some pretty fantastic reports I can use to track the progress of my training, filled with shiny graphs! (Really, who doesn’t love graphs!)

Heads up: I received no incentive from the makers of any of these apps for this review. The only apps that paid me any funds were the Pact app and AchieveMint, because that’s pretty much the point.

Check it out here: https://www.myfitnesspal.com/

This is probably the most well known of the apps I’ll be talking about, and for good reason. The MyFitnessPal app starts off as a simple calorie tracker. Add in the foods you eat, as well as exercises you do, and it’ll show you where you’re at in relation to the goals you have set, as well as the needed nutrition based on a few basic personal data points you have entered on your profile. 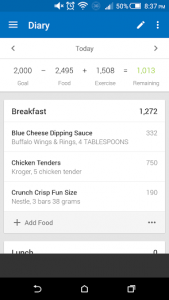 Yes, I had chicken tenders with blue cheese dipping sauce for breakfast this morning. Don’t judge.

But after you use it long enough, you can begin to reap the sweet sweet data rewards.  You can see reports showing your calorie intake trends, macronutrients, and vitamins and minerals. If you pay for the upgrade to the premium version, you get access to reports on what items you’re eating that are responsible for the highest levels of calories or various nutrients. 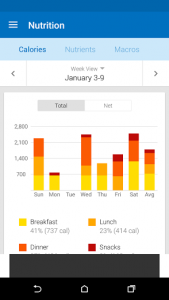 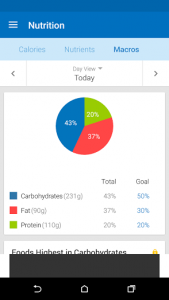 Mmm…pie charts make me hungry…somehow. Explains why my carb levels are way too high.

I’ve been using the MyFitnessPal app now to help manage my current diet, knowing when it’s ok to splurge a bit, and when I need to reign it in a little bit. Alternatively, I’ve used it when choosing what foods I’ll be packing on my trip. Plug in eight hours of hiking as my exercise, and it automatically adjusts the goals to show the extra needed protein, as well as a higher calorie count required. In a running theme for today’s posting, the app also interacts with my next item, the Runkeeper app as well as others, to sync up workouts automatically, letting more easily track everything together.

Check it out here: https://runkeeper.com/home

Ok, I am way too fat to have the right to have a “running” app on my phone, but this one has played such a huge part of my journey in getting to the AT. This app, plus Santa.

A few years ago, my father, probably the person who I respect more than just about anyone else running around this world, started getting fairly serious about his fitness. He had no intention, apparently, of doing this by himself. So he talked my sister, brother in law, and I into signing up for a 5k called the “Santa Hustle.” I hadn’t worked out seriously for most of my life, but having the specter of not being able to finish the 5k with my family was enough to get my butt going to the gym and walking around the neighborhood semi-regularly. After that, I kept up my walks, with occasional lapses, getting into further and further distances. 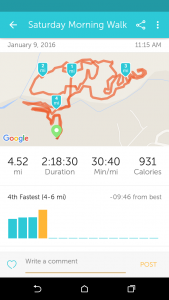 Here’s a hike I did at a local park. Yes, I am somehow related to Bill from the Family Circus, how did you know?

This app was probably the best motivation I could have asked for. Notifications on my phone reminding me to workout, data reporting my progress, showing when I went for further distances or had a better pace, and probably most important, my dad got regular reports when I would go and I’d get a notification after he completed a run as well. He lives in Florida now, but despite being states away, he’s still able to provide me motivation, both sending me a congratulatory note if I put in an especially long workout or increase in my pace, and I get regular notices when he goes for a run on the beach or around his neighborhood. (It’s possible I might occasionally curse him when I see he’s logged a run on the beach and we’re sitting with 20 degree weather in Kentucky) 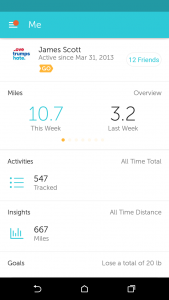 Scoff at my 10 miles all you like, I did better than last week!

Check it out here: https://www.pactapp.com/

As an additional bit of motivation, I installed this app, simply called Pact. It works with a number of other apps, including the MyFitnessPal and RunKeeper, to track your meals, workouts, and fruits and vegetables intake. You then bet each week whether you think you’re going to be able to hit your goals by setting a certain amount for each goal missed. If you hit all of your goals, you’ll get a small payout at the end of the week, if you miss any goal, you’re penalized the amount you set 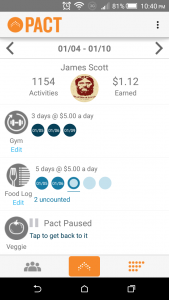 $1.12! Baller yo! I’m rollin like a fat cat all the way to the Taco Bell dollar menu

I debated whether to include this app or not, because I’ve stopped using it. I must admit though that it was definitely a motivation I needed for a length of time, and it was helpful. There’s nothing to get you moving like realizing that you’ve got money on the line if you don’t get a workout in before the deadline. I’ve more than once gone out for a late night walk because I knew I needed to log a 30 minute activity in RunKeeper before midnight to avoid a $5 penalty. Plus, if you do it for long enough, you can earn up some cash for things like trail food or maybe even a night at a hostel.

The downside to the app, though is that you’re always going to be on the weak side of risk versus reward. The lowest penalty you can select for a missed activity is $5, but the largest payout I ever got for a week of activities was just over $3. Also, the fruits and veggies pact was credited based on votes by other users. You’d take a picture of yourself eating the fruit or veggie, and then other users would be asked to vote if it was a valid submission or not based on the criteria that it be a) an actual fruit or veggie b) a full serving and c) that you be actively consuming the fruit or veggie in the photo. The problem is, people are jerks. Because of the way the arrangement is structured, your payout is larger the more people that miss their activities. You can’t really influence someone else missing the gym or failing to log their daily calories, but you can downvote every fruit and veggie photo you see. This happened more than once for me. You’re able to report a problem, stating that you didn’t get credit for a valid submission. They credited me for the food, but the amount of time it took to go through the process made it frustrating.

After I gave up on the PactApp out of frustration, I still had this great resource as a motivator. This isn’t an app per se, but it does interact with a number of different fitness apps and even helps you find some new ones. This site was great for giving payouts, although you might have a stretch of time in between, but the payouts were much larger than what you get with the PactApp, plus there’s far less risk. AchieveMint doesn’t require any payout from you, but gets all of your fitness data as delivered by the various apps you choose to connect. In all so far I’ve made over $100 off of the Achievemint site, all just for letting it track my workouts and daily meal plans. Occasionally, you get the opportunity to participate in studies that offer increased bonuses if you track your workouts during a set period of time. They’re working on adding some more functionality to the site, but it’s definitely worth your time. 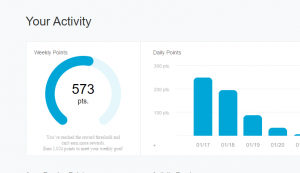 I’m on a downward trend this week, better hit the gym

Anyways, I hope at least one or two of these prove as helpful to you as they were to me. I may be hitting the trail and leaving my computer behind, but the technology helped me get there!