Even though it called for the possibility of rain overnight, it was dry when we woke up. Rash, Piñata, and I packed up early and headed out, excited to get to the resort and lay in a real bed. We had plans to stop at the wayside for lunch first. Everyone else stayed put in their sleeping bags, complaining of the cold. Piñata and I, continuing the tradition, had our shelter pants on since it was town day. The morning hike was pure misery. It was raining, bitterly cold, and all I could do to stay warm was hike quickly with a warm meal in mind. I passed an older couple hiking and they kept pace behind me for a while. I also passed a large group of boy-scouts looking like they were enjoying themselves despite the horrible weather.

I almost missed the turn for the wayside, but after passing it I had a feeling and thankfully backtracked. I walked up a steep gravel hill and along Skyline drive for a total of 0.4 miles. Before the restaurant there were bathrooms, so I went in to dry off. The bathrooms were toasty warm and wonderful. When Rash and Piñata arrived, we went into the restaurant together. He restaurant was not nearly as warm as the bathrooms, and all 3 of us were soon shivering. We were there at 10:20, and they didn’t serve lunch until 11:00, so we ate breakfast and a famous blackberry milkshake (which didn’t help our feeling cold). We got a few resupply items at the store and tried to muster the courage to start hiking in the awful, cold, rainy weather. 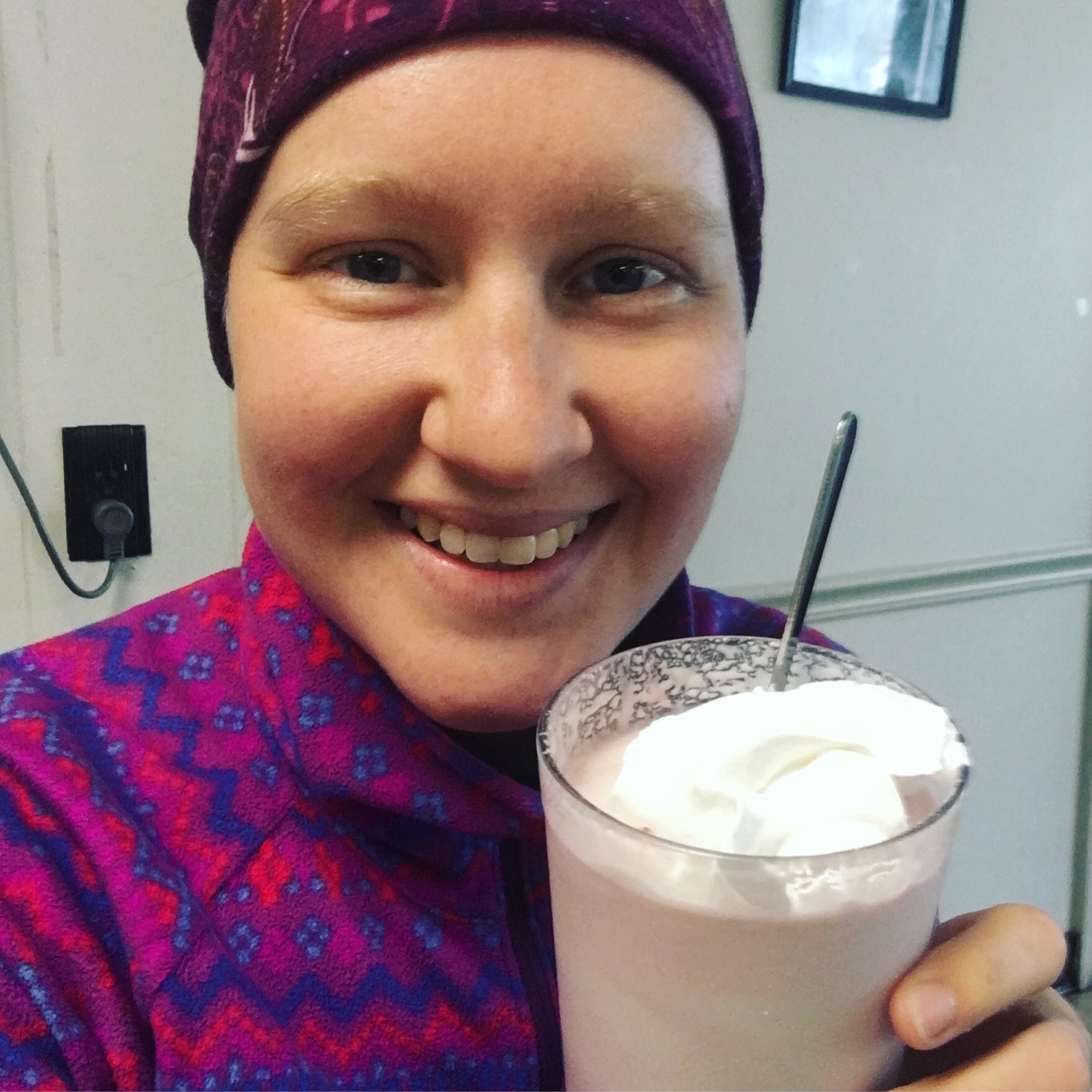 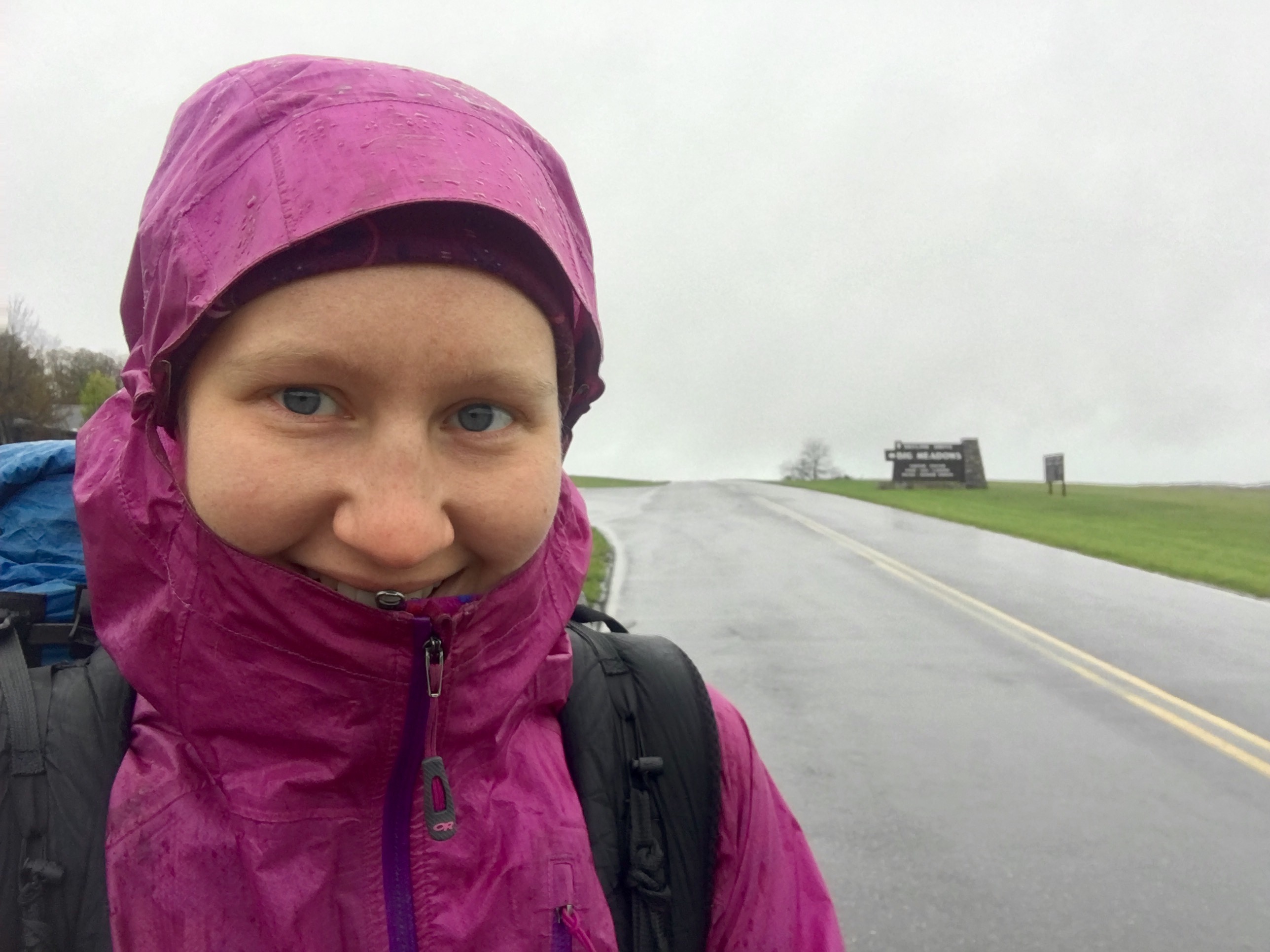 The bone chilling cold only lasted a few minutes, and when I got moving I warmed up. I felt like I was moving at a glaciers pace, despite the enticing resort at the end of the day. After a very long and cold 9 miles, I came to the turnoff for the resort. Down a steep 0.1 miles, I came to the check-in office surrounded by clean, well dressed people. I was wearing my loud shelter pants, my pink rain jacket, and my purple buff on my head. I checked in, and Rash and Piñata joined me. The front desk lady gave us a map to get to our room. She zigzagged her pen across the map showing us directions how to get there. We nervously looked on, our aching feet not excited for more walking.
Down a very steep trail to our room, we passed a concrete sign for the Passamaquoddy trail (what we nicknamed “pass me some quarters”). That made the walk a little better because we were laughing so hard we were doubled over. When we finally got to our room, we realized we had an outstanding view. 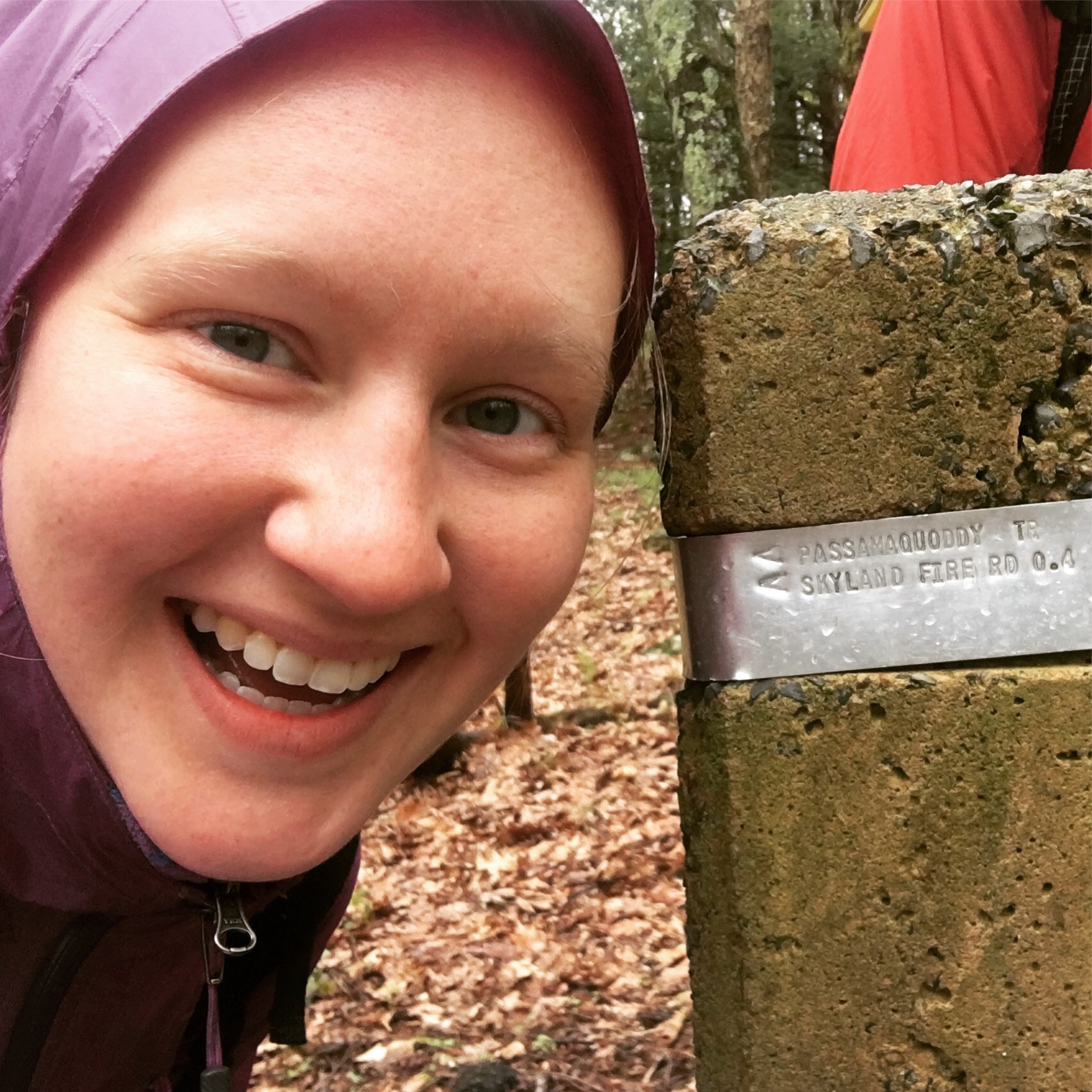 Passamaquoddy trail (“pass me some quarters”) 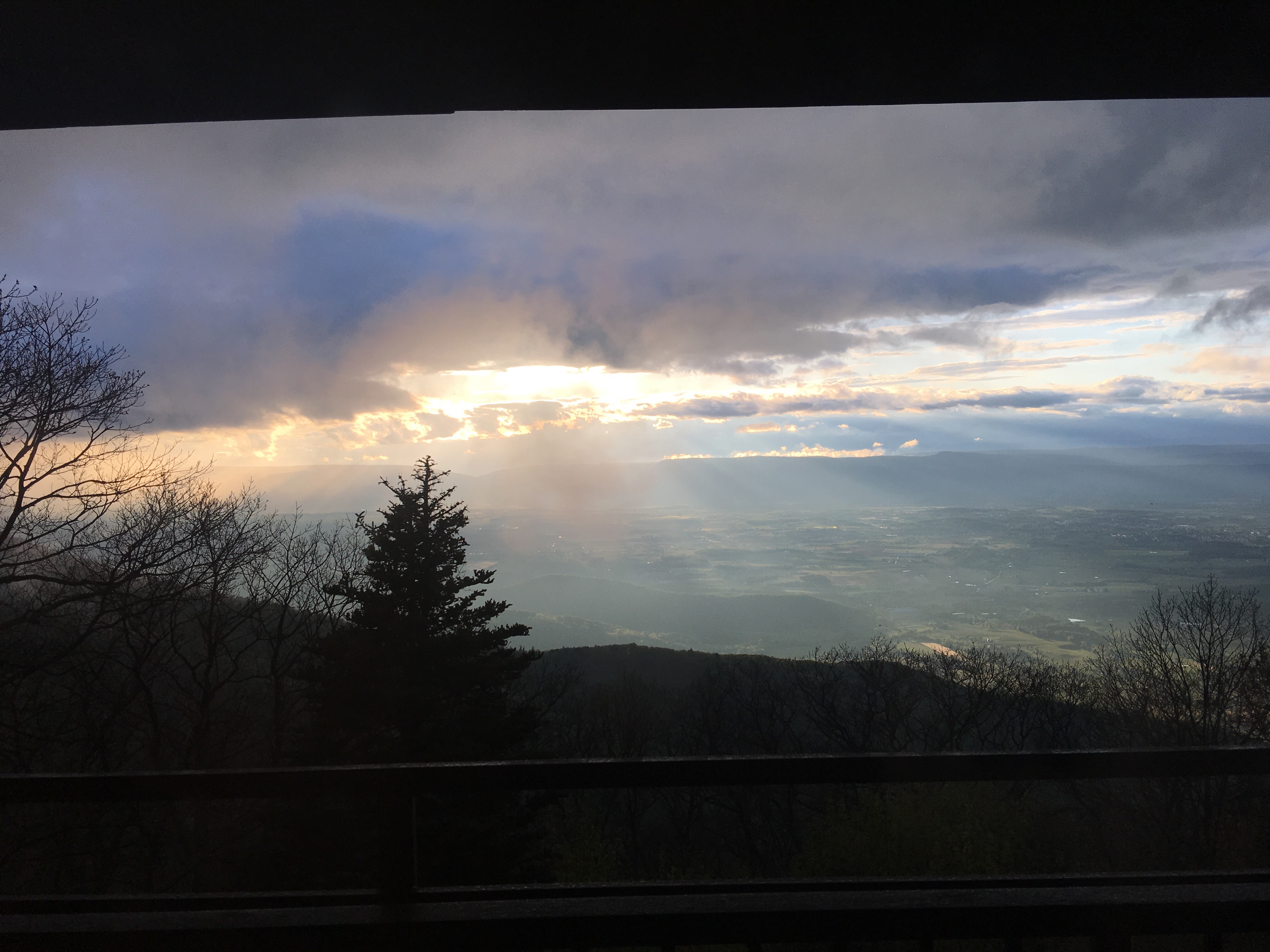 Our view from the room

We showered, washed our clothes in the sink (they didn’t have a washing machine) and Rash hung a bear line across the room for a clothes line. We had to make the very long trek up the hill to go to dinner, which was good but way overpriced like everything else in the park, and made our way back to our room. We watched TV all evening and rested our feet.

This morning we slept in and it was glorious. Checkout was at 11 and we left the room at the last possible minute. We found Rooster also in line to check out. We bought sandwiches at the coffee shop (Piñata bought 3, Rash 2, and me 1) and ate them sitting around the fire. Piñata packed one sandwich out for dinner tonight. I talked on the phone with Andrea for a while and wrote letters and postcards. Rash and Piñata left to hike and Rooster wasn’t far behind. I talked with Calves and Farley who were planning on going into Luray today.

I left to hike and passed a sea of day hikers. I felt like I was moving through molasses. My right lower back was hurting from when I bent over in the shelter to hang my hammock a few days back. It had been simmering for the past 2 days but was hurting more this morning. I came across Rooster taking off his puffy and we hiked together for a few miles. We came to a porta potty and picnic area and stopped for a few minutes. 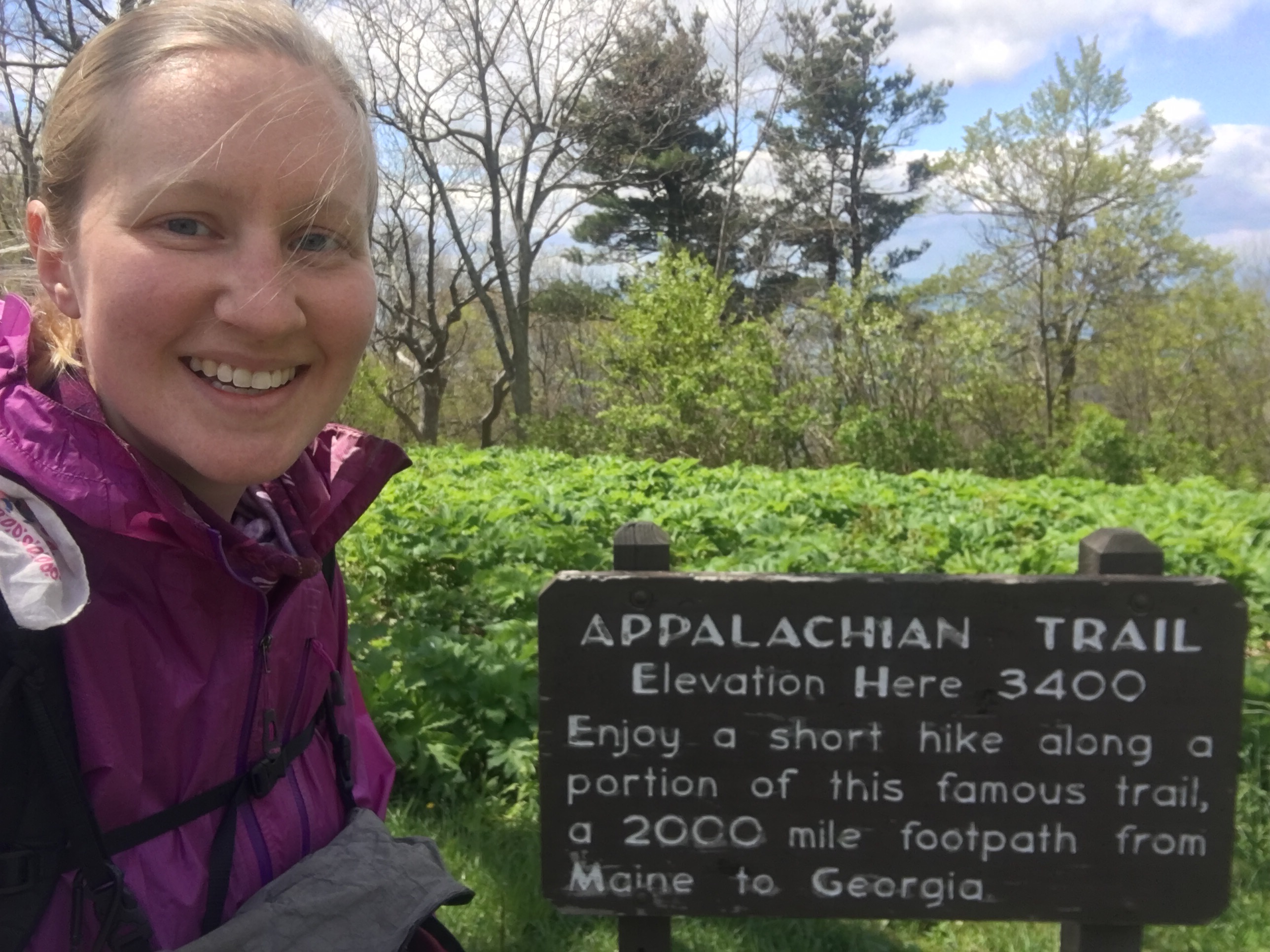 I hiked on and came to the first shelter. A section hiker was there and I signed the log and moved on. The few miles past the shelter I felt sick and had to sit for a few minutes. Farley passed me and we passed back and forth until the road. He left at the road and I passed a hiker up the last hill to the shelter. At the shelter I found Rash and Piñata huddled in their sleeping bags watching The Office. 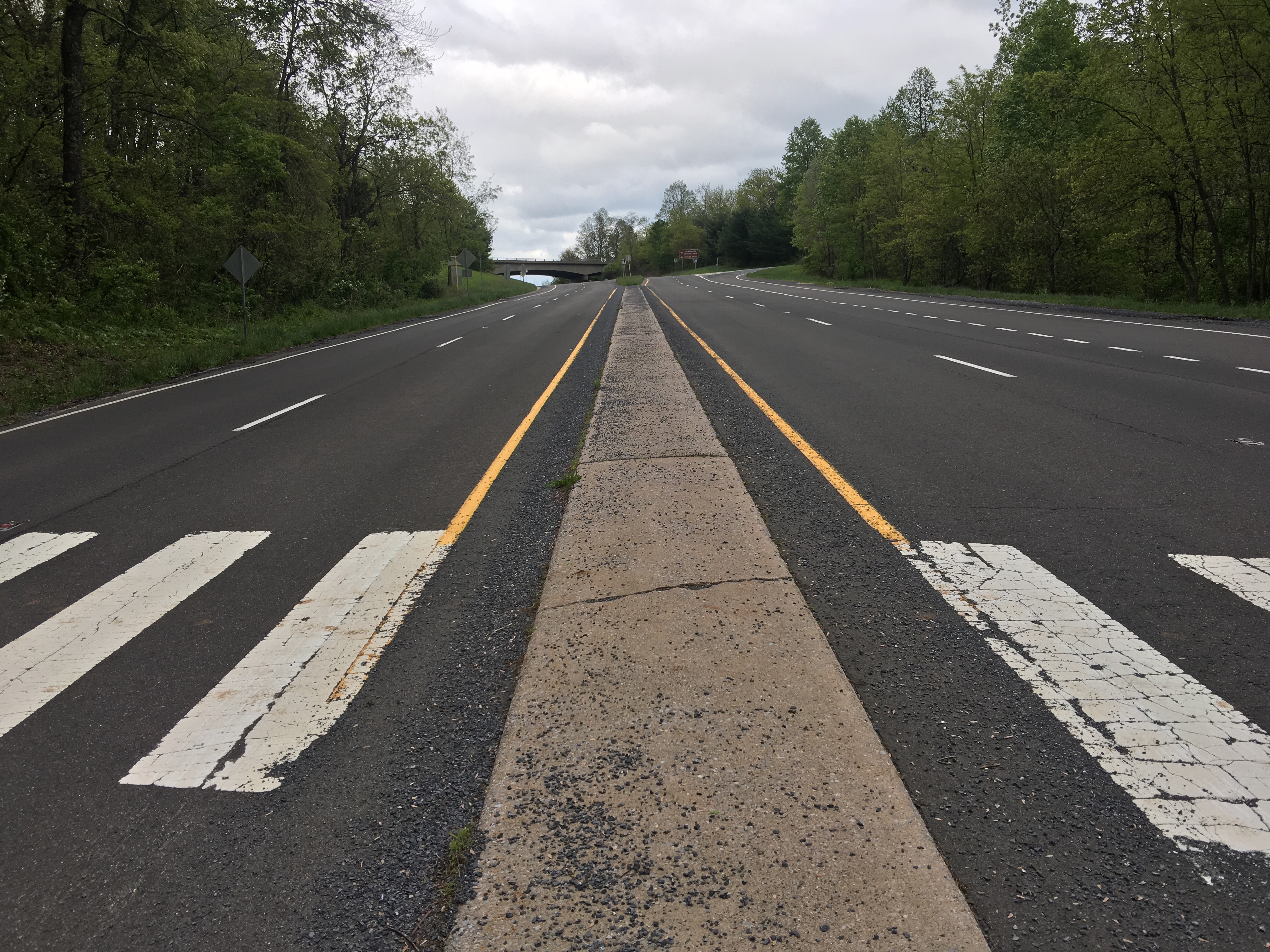 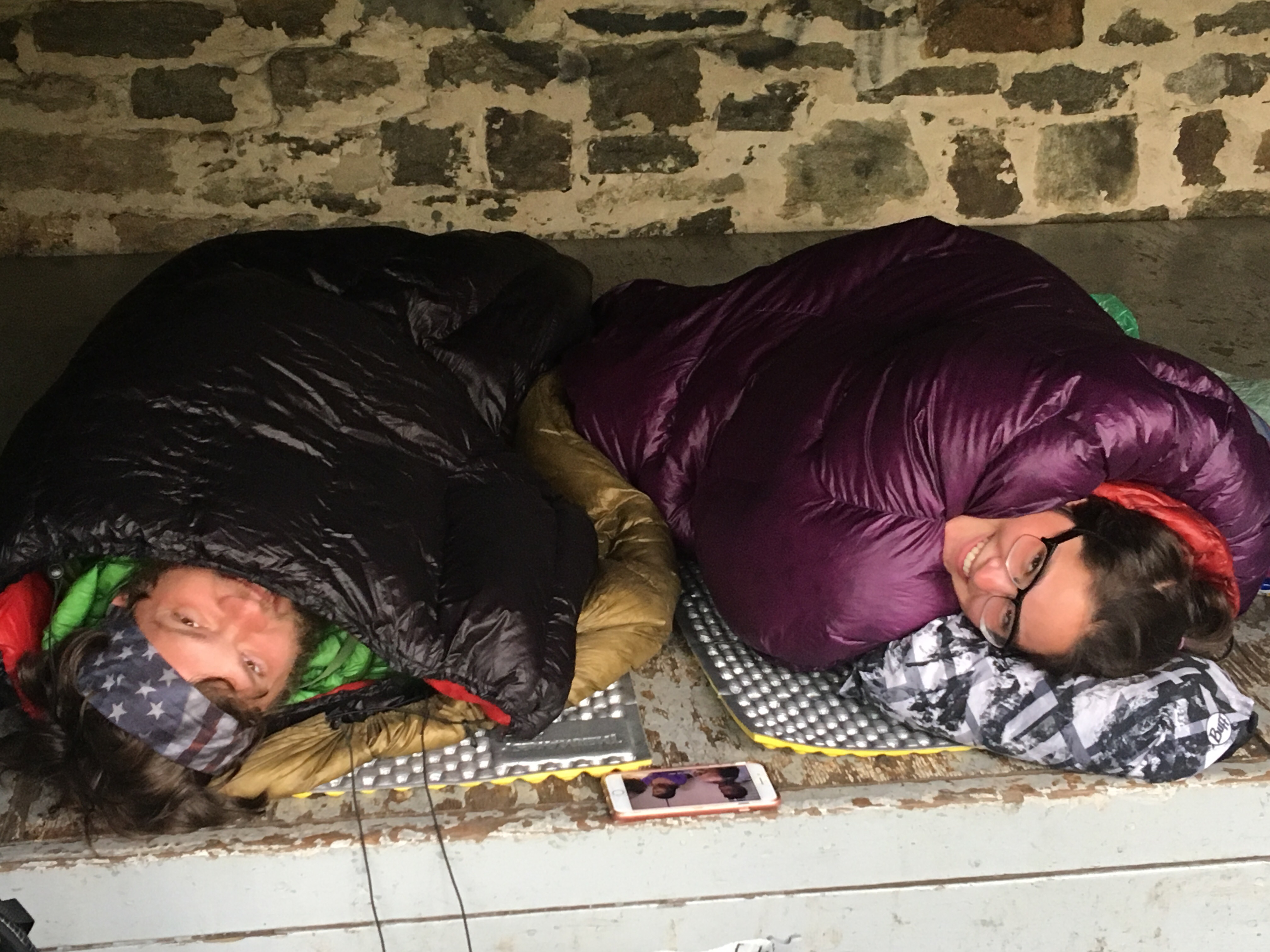 Rash and Piñata huddled in their sleeping bags, watching The Office

We ate dinner, I set up in the shelter, and Waldon (the thru hiker I passed up the hill) set up her tent. After dinner, Rash looked out from the shelter and found a bear climbing a tree! It was our first bear sighting and very exciting. We took some blurry pictures and then watched it take a nap on a branch, then hike down and disappear in the woods. 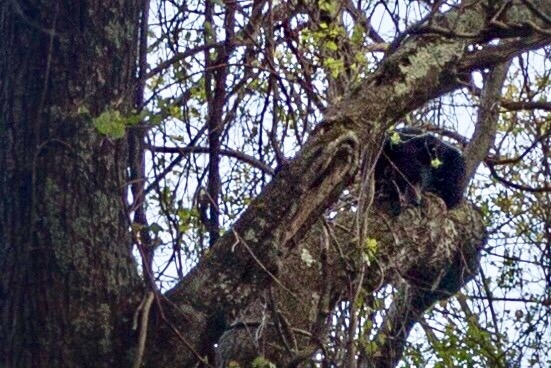 Right when it was getting dark we were joined by Darwin, Legs, Glim-Glom, and Wetwipes. 2 other hikers arrived after. Tomorrow is hostel day!
Day 72, 5/8: Pass Mountain hut -> Front Royal hostel (22.7 miles)

I woke up a few times during the night, thinking I heard the bear around camp. I looked out and thought a large black object was the bear, but in the morning it turned out to be a tree. Sometime during the night I got hot and took off my puffy, hat, gloves, and buff so I woke up with all kinds of clothes in my sleeping bag. It was cold this morning but not unbearable. We got up and left early to tackle the 22+ miles we had to do while the rest of the hikers were still sleeping.

Early in the hike I was starving, despite eating breakfast. I stopped to eat my snacks and Rash and Piñata continued on. The shelter midway today was 0.2 miles off trail, so I figured I’d stop on the trail for lunch instead of adding an unnecessary 0.4 miles to my load today. I was having a hard time hiking, so I stopped 4 miles shy of the shelter after hiking a mere 6, sat on a rock, and ate a protein bar. 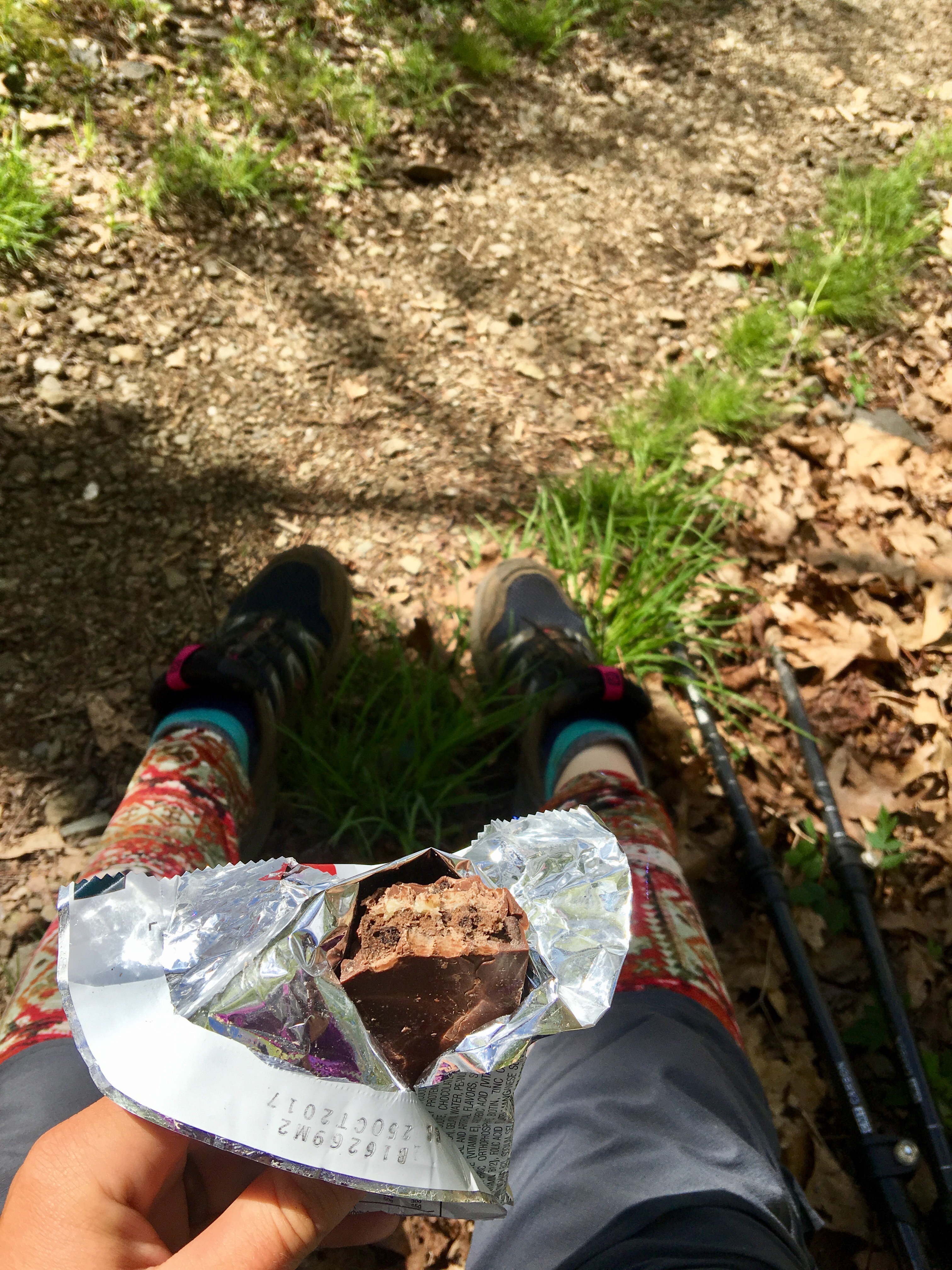 It was cold today but sunny, and I passed countless amazing views. The skies were incredibly blue. 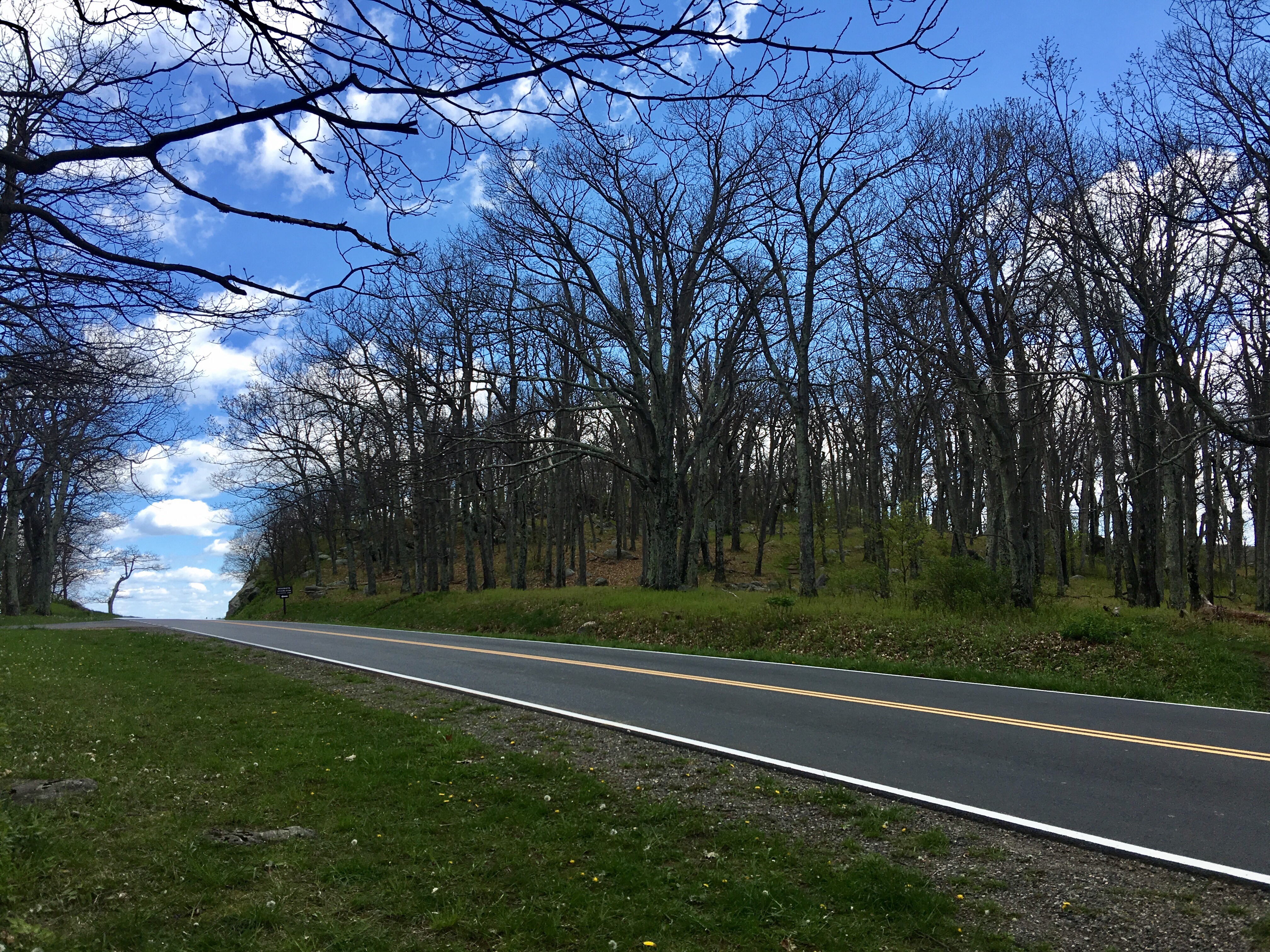 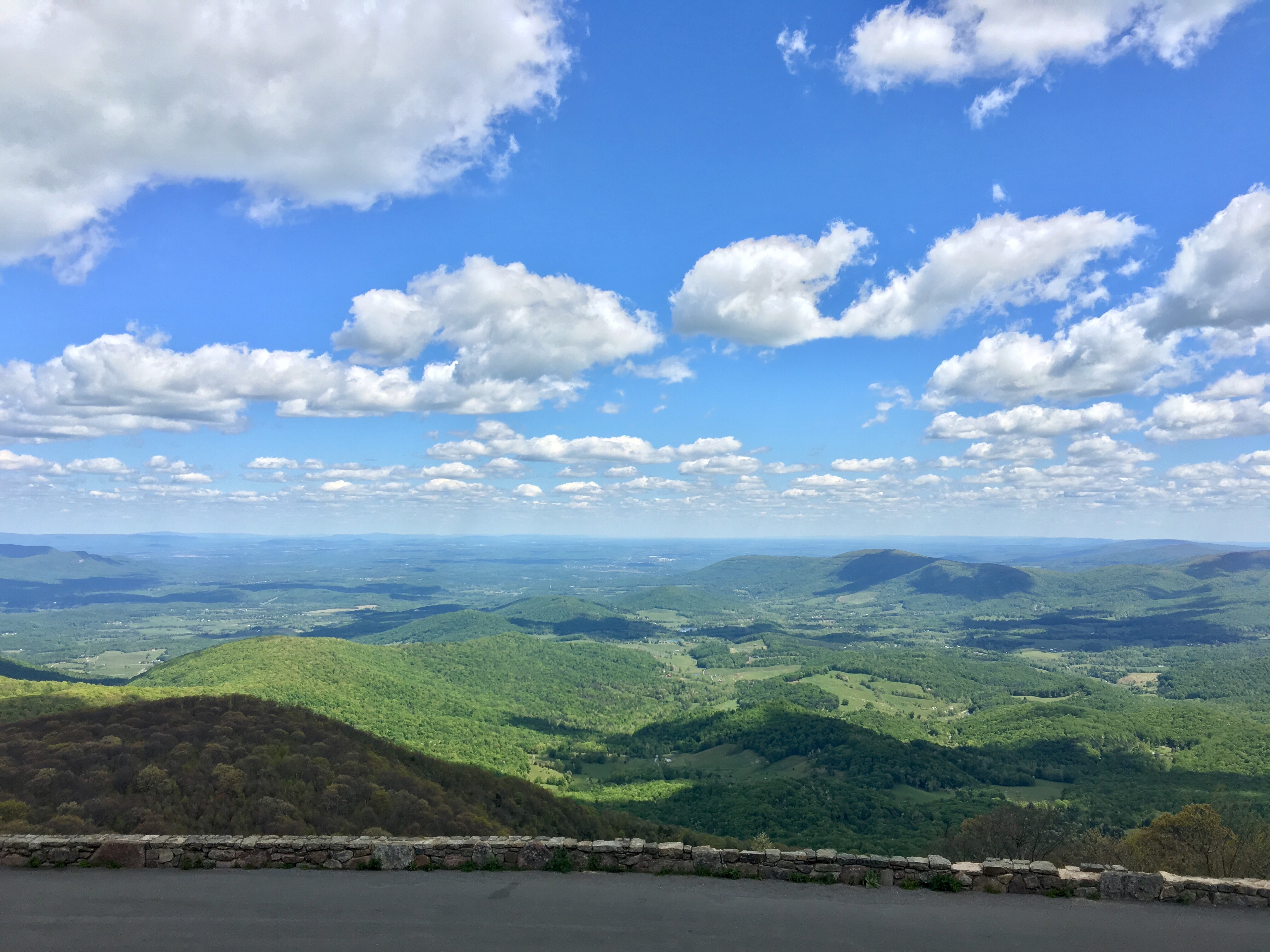 A view on Skyline drive I could see from the trail 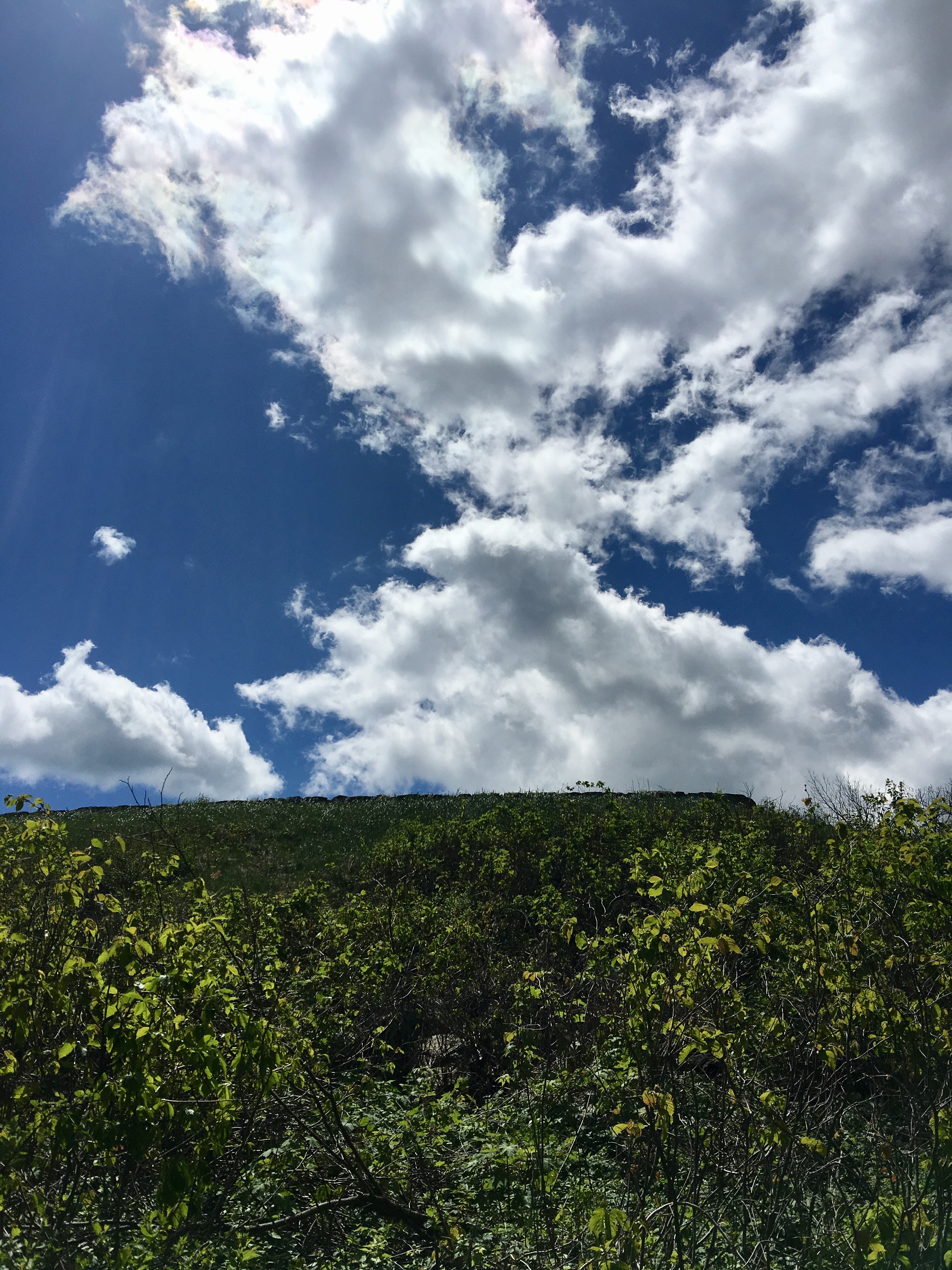 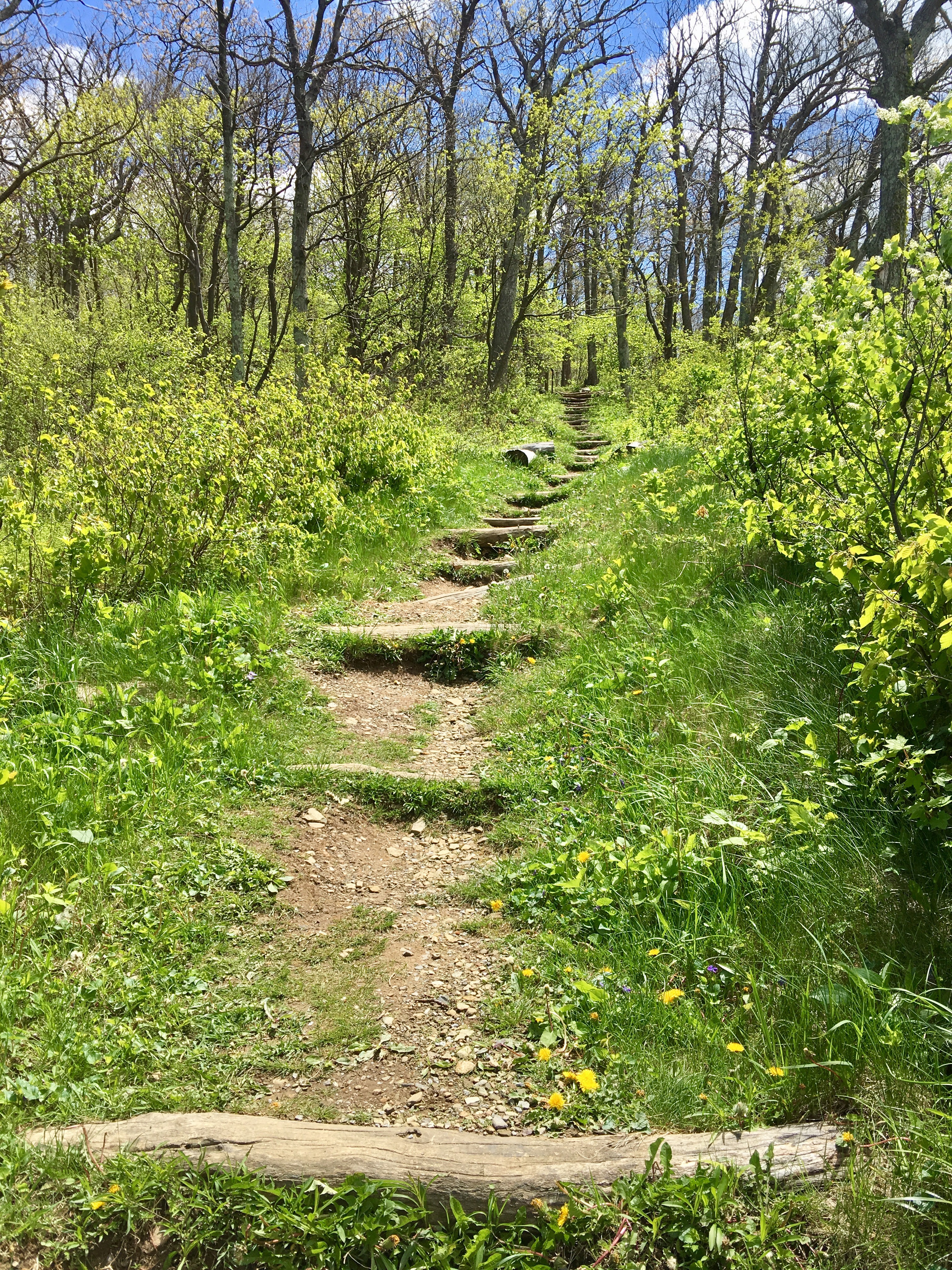 The stairs up from the clearing

There were lots of day hikers out, and I stopped and had nice conversations with 3 groups. I passed some commotion in the woods and found a huge wild turkey trotting away from me. He stopped and put up his feather in an awesome display, but then hustled away before I could get a picture. I hiked along, then stopped on a log right before a clearing to get a rock out of my shoe. There was vegetation around the log, and as I bent down, my forearm (covered by my long sleeved shirt) brushed a plant and immediately started stinging. It puffed into a red, angry, welt. I thought maybe the plant was a stinging nettle. I tried putting Gondbond powder on it thinking that would absorb the oil, which did absolutely nothing. Plan B was taking my buff, putting a glob of hand sanitizer, and rubbing the area, which thankfully took away the pain and the redness eventually disappeared. 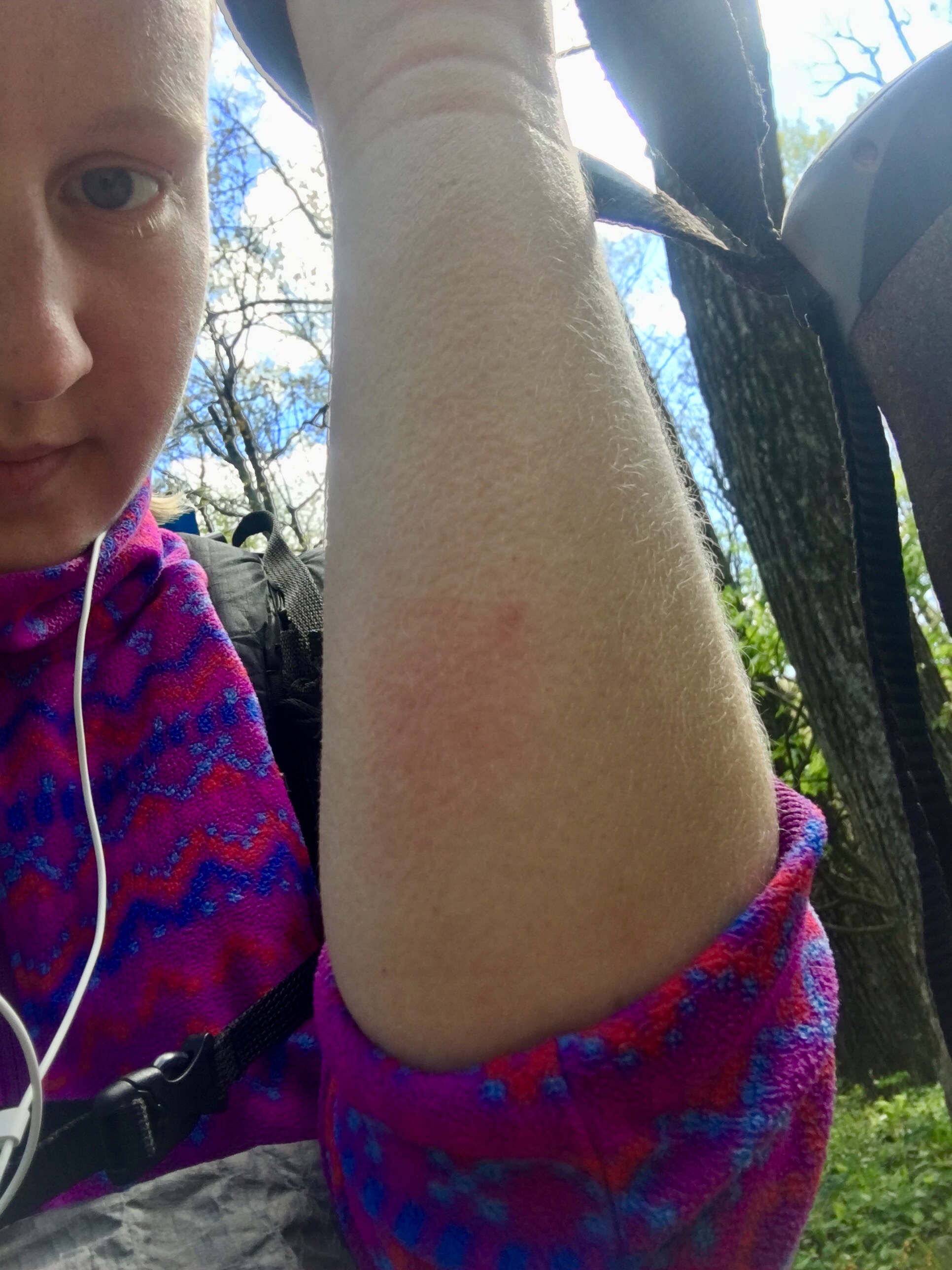 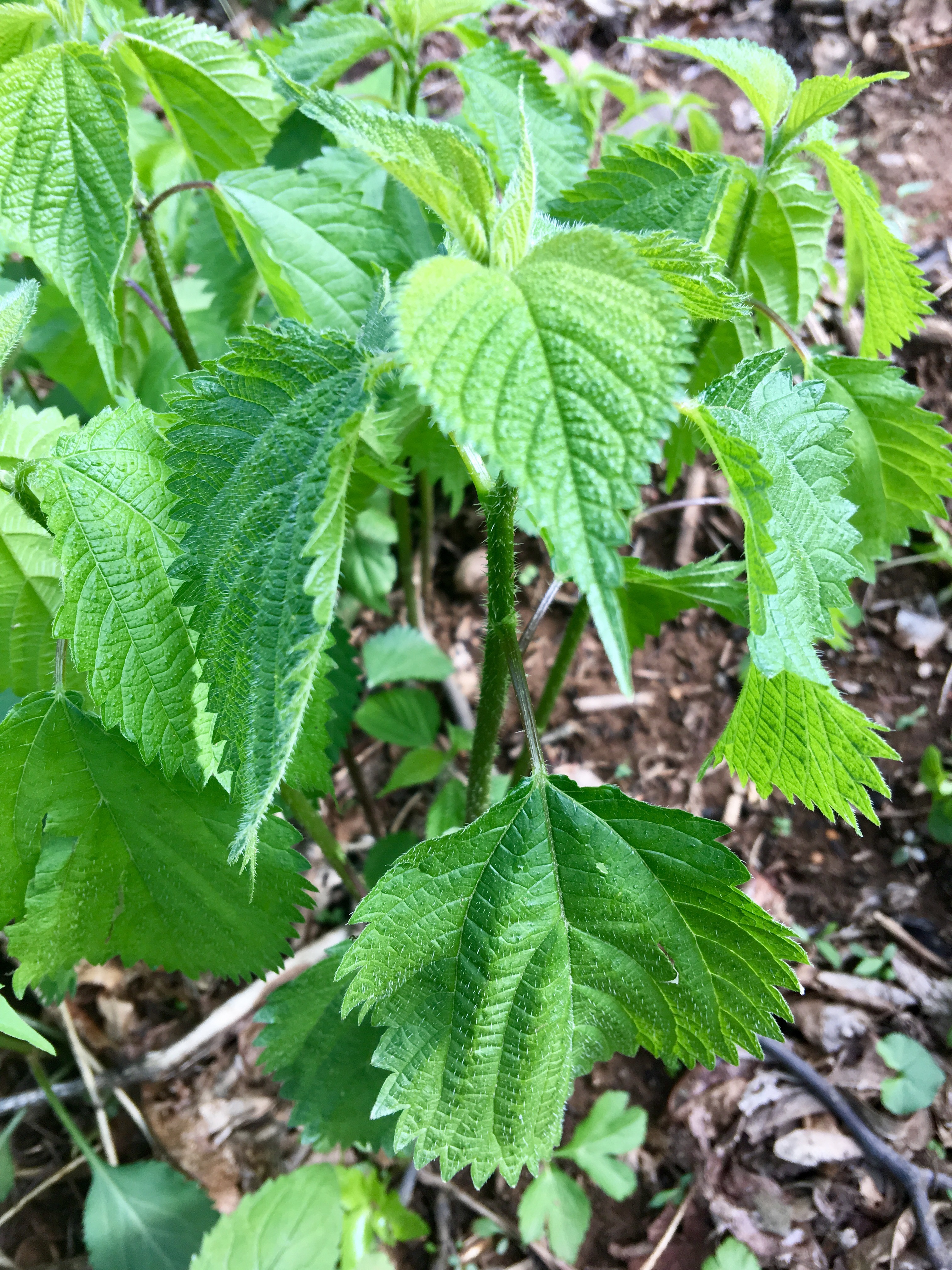 Plant that tried to take me out

It was a long, flat jaunt to the hostel. I met a man wearing flannel who grew up near me, and we had a nice 10 minute chat about our home town area. The hostel was 0.5 miles off trail, but it went by quickly. I had directions to the turn off to the hostel left by Rash and Piñata who were ahead of me. 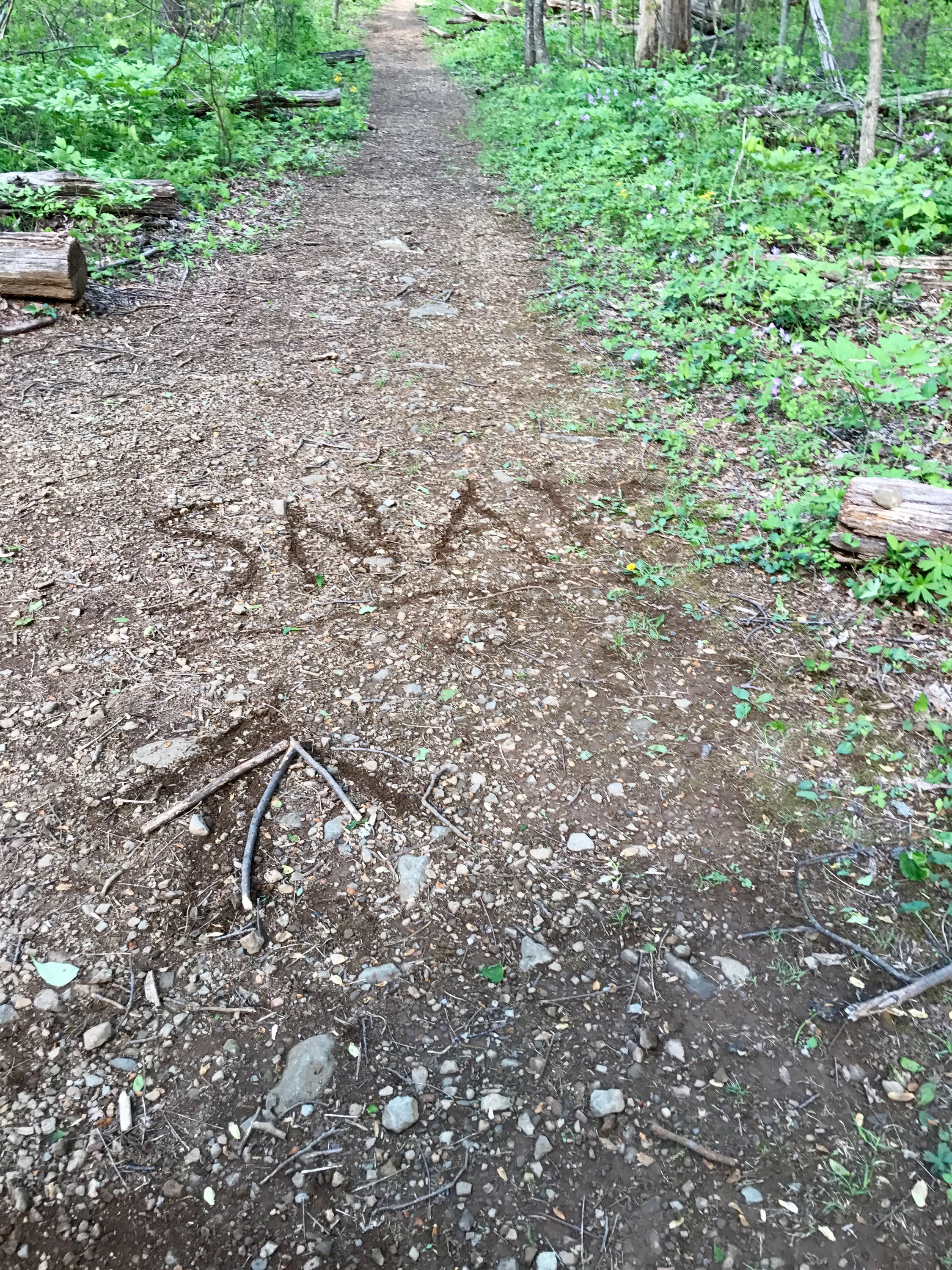 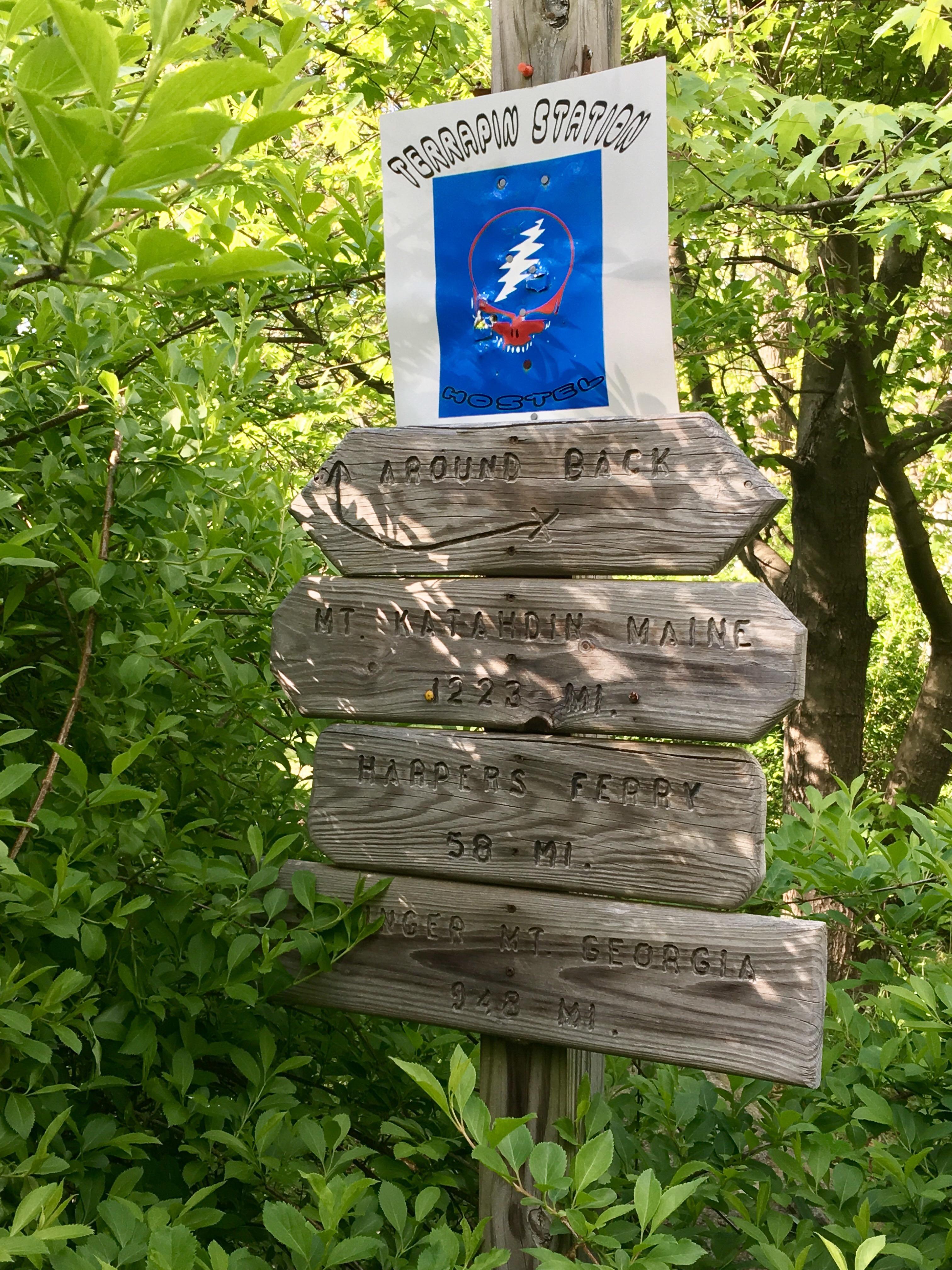 We lounged around for an hour, charging our phones, and then the owner brought us to the grocery store. He thru hiked the AT in 1995 and then thru hiked the PCT in 1998, so we had a lot to chat about. He’s also a Deadhead which reminded me of Dr. Cole. We came back, and I made frozen pizza and drank chocolate milk which was included in the price of the bunk. I talked with a lady starting a flip flop hike ~100 miles back who hiked with her 80 year old mother for the first few days. She didn’t have a trail name, but had picked something that sounded like Nemo, so I called her Nemo. Rash and I stayed up late, past 11pm, watching the travel channel talk about food in China and waiting for the laundry to be done.