Book Review: “When You Find My Body”; The Tragic Story of Gerry Largay

When You Find My Body: The Disappearance of Geraldine Largay on the Appalachian Trail

The story of thru-hiker Gerry “Inchworm” Largay was captured in headlines: lost on the Appalachian Trail in 2013, a massive but futile search, and the chance discovery of her body in 2015.

Maine author and explorer Dee Dauphinee, in his meticulously crafted book When You Find My Body: The Disappearance of Geraldine Largay on the Appalachian Trail, recounts in exhaustive detail the search that followed the report from George Largay that Gerry, last seen leaving Poplar Ridge Lean-to in Maine on July 22, 2013, was missing. 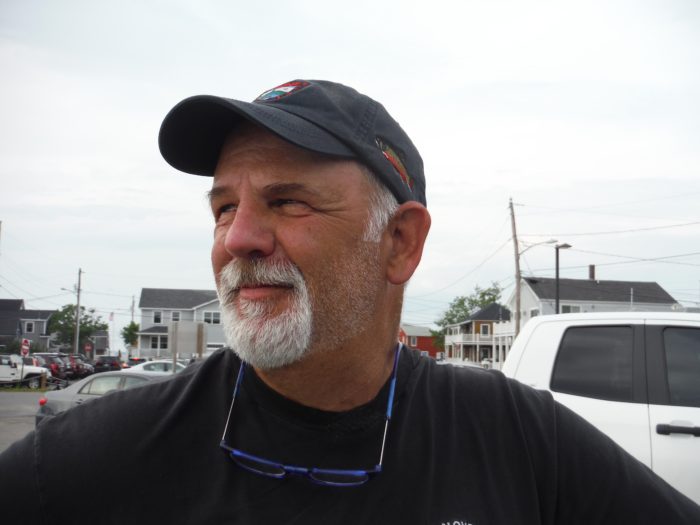 But Dauphinee’s book is about more than just the search. He brings Gerry to life.

He talked with Gerry’s lifelong friend from high school, with the woman who hiked with Gerry from Harpers Ferry to New Hampshire, and with hikers who met her on trail.

One hiker, Terry “Blue Moon” Bliss, recalled spending the night at Eliza Brook Shelter in New Hampshire, Gerry’s first night alone after her thru-hiking companion, Jane Lee, returned home to care for a daughter who had fractured her ankle.

“She looked spry, happy, and she took off with ease and assuredness,” Bliss told Dauphinee. “She looked like a confident, experienced backpacker.”

Dauphinee spoke extensively with Betty Anne Schenk, Gerry’s childhood friend growing up in Tampa, FL. The two maintained their friendship as adults, vacationing together, and exchanging emails about their lives. In those emails, Gerry talked about her dream of hiking the Appalachian Trail, training for an AT flip-flop hike that would start in Harpers Ferry, and how husband George would meet her at trailheads and ferry her to town for supplies and a night in a comfortable bed.

He did not speak with family members, concluding that he had enough information from Gerry’s journal entries. “The family beat themselves up” doing interviews while the search went on, he said in an email, and he decided it was too soon to revisit topics with them. 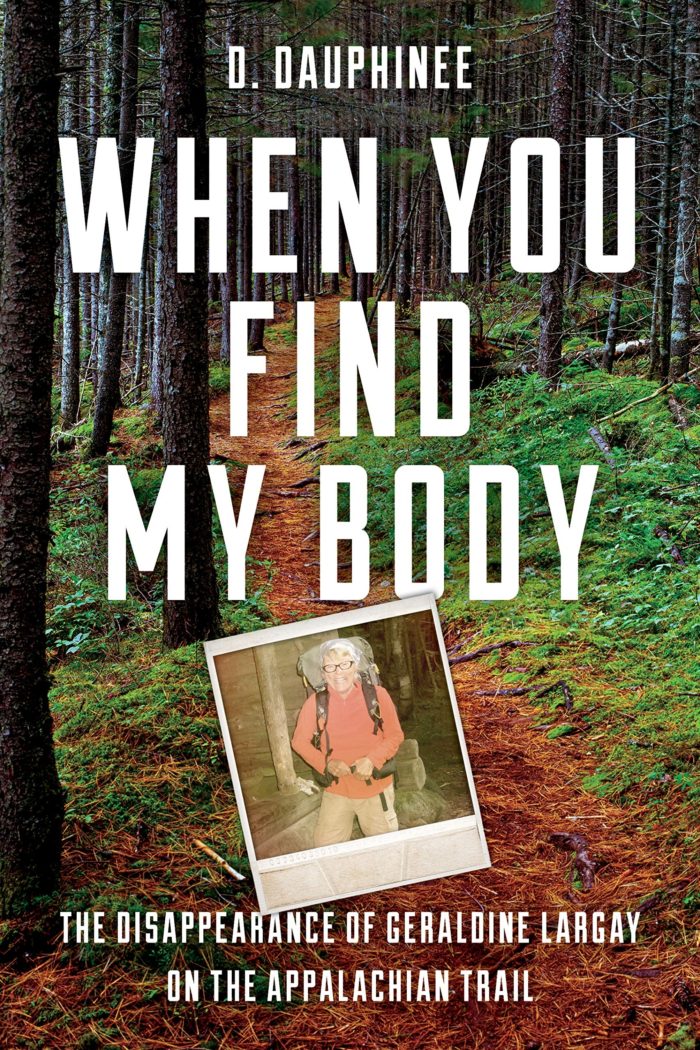 Dauphinee addresses the big questions that surfaced after Gerry disappeared:

Was she fit enough for the trail? Yes, by all accounts, he concludes. Bliss was just one of many hikers who spoke of Gerry’s confidence and fitness.

Did she become disoriented easily? Yes, Dauphinee says, there were instances of Gerry getting turned around on the trail while hiking, and Jane said Gerry seemed to become disoriented under the strain of the hike. Dauphinee concludes that Gerry probably didn’t have a great sense of direction, but in the end it was her behavior after getting off trail that mattered more for her survival than her sense of direction.

Several reports tried to link Gerry’s disappearance to her use of prescription medications, particularly Lorazepam. But as Dauphinee points out, after investigators spoke with George, Jane, and Gerry’s physician, they ruled out the medications as unlikely to be a cause in her disappearance.

Dauphinee concludes that the lucid, eloquent writings in Gerry’s journal while she was lost did not seem to be those of a person under the influence of drugs or in drug withdrawal.

And he addresses a theory raised by a Maine newspaper: That Gerry was done in by a rogue operator from the Navy Survival, Evasion, Resistance and Escape (SERE) school, whose land Gerry’s body was found on. Dauphinee talked with retired Navy Senior Chief Dennis Haug, one of the search-team leaders from the school, who was upset by that accusation, and by another that said the training school didn’t help in the search.

“We covered twelve miles the first day, ten miles the next, nine another day, and yet ten more miles another day, in rain and sleet, in some of the toughest terrain in the area,” Dauphinee says Haug told him. “Miles upon miles, year after year, the search continued so Gerry could go home.”

Dauphinee goes beyond Gerry’s disappearance as he describes the formation of the AT, and what leads people to a George-to-Maine thru-hike.

For Gerry, he says, hiking the AT was about pursuing her spirit of adventure, her dream, and her faith.

She trained extensively for her hike, reading books, talking to hikers, weighing her gear, and attending hiking camps. One of those camps was at Warren Doyle’s Appalachian Trail Institute in Tennessee, which counsels aspiring thru-hikers.

Dauphinee’s comments about Doyle are measured and weighed carefully as he describes how helpful Doyle was in preparing the book. Left hanging is a big but… which Dauphinee returns to in the book’s conclusion.

It is a testament to Dauphinee’s research that he tracked down hikers Gerry met while on her trek from Harpers Ferry to Maine.

Mary “Tenderfoot” Blanton recalled meeting Gerry, George, and Jane while she was section hiking in Massachusetts. She invited them to her home when they reached Vermont.

“It was so lovely having them,” Blanton recalled. “They were upbeat and friendly.”

Blanton, who planned to leave in a month to hike south from Katahdin to Vermont, expected to meet them on the trail again. When she learned Gerry was missing, she became so upset she returned home, Dauphinee says.

Dottie “.Com” Rust and Regina “Queen” Clark were among the last people known to have see Gerry alive, and Rust took the picture of Gerry that became ubiquitous after she disappeared.

On their southbound hike the day before, while near the area where Gerry likely lost the trail, Clark recalled saying, “God, if you were six feet off the trail, you’d be a goner!”

Dauphinee talked extensively with Lt. Kevin Adam, head of the Maine Warden Service search and rescue unit, and who oversaw the search for Gerry. The search lasted for varying degrees of intensity for 26 months, and was considered one of the longest and most expensive in Maine history.

He talked with Donn Fendler, who at age 12 in 1939 was lost for nine days north of Katahdin, to learn what it was like to be lost in the Maine woods.

After Gerry’s body was found on Oct. 14, 2015, less than 3,000 feet from the Appalachian Trail, investigators read through her journal to piece together what happened. The last passage was dated Aug. 6.

They found a wrenching note, since widely published and the title of Dauphinee’s book, that Gerry wrote before she died: “When you find my body, please call my husband George … and my daughter Kerry. It would be the greatest kindness for them to know that I am dead and where you found me—no matter how many years from now.”

Dauphinee’s book is painstakingly comprehensive, covering Gerry’s early life, her thru-hike preparations, her time on the trail, and the community of the trail. He talks about the psychology of being lost, surviving in the woods, and the countless tips and leads that investigators looked into during their search for Gerry.

And at the conclusion of a balanced reckoning, Dauphinee offers his own take on what happened.

Gerry was a strong hiker, and was prepared for the rigors of the trail, he says. But he adds that training such as that offered at Doyle’s school, which may be very good at preparing people to thru-hike the AT,  did not help her once she got lost off the trail.

And that happens about 30 times a year in Maine, the Warden Service’s Adams said.

Over two days on the AT in Maine, Dauphinee asked 21 thru-hikers if they carried a compass, and did they know how to use it. Three answered yes to both questions; 15 said no to both. One hiker gave an illuminating response: he did not have a compass, but wished he did because he found himself turned around twice in the 100-Mile Wilderness.

Gerry struggled through dense woods and steep terrain, climbing in an effort to find cell phone reception so she could tell George that she was lost, according to her journal.

Her wandering through the woods probably exhausted her, leading Gerry to stay put in the spot where she was found, Dauphinee concludes. She pitched her tent under a hemlock, hidden from the aircraft searching for her. She built small fires but put them out, rather than trying to keep a large one going to alert searchers. She had a tiny compass, and when Dauphinee bought a similar one, he says it was useless.

She had a SPOT locator, but left it in George’s SUV.

Everybody wanted a clean ending, but there isn’t one, Dauphinee says. The wardens, volunteers, Navy, and other searchers put in Herculean efforts, he says, but there was just too much ground to cover.

And he doesn’t blame Gerry, calling her death simply tragic. She wasn’t prepared for what to do if she got off trail, and she’s not alone in that among AT hikers, Dauphinee writes.

On a trip to Gerry’s campsite, which Dauphinee has visited several times and considers a shrine, he and two companions walked downhill beside the stream where Gerry collected water after setting up camp. It was tough going, and they walked slowly, as they assumed a tired, 66-year-old woman would. Forty-three minutes later, Dauphinee says, they reached a woods road that had been swarming with people in the early days of the search.

In the end, Dauphinee talks of Gerry’s gift to other hikers: they hike safer, they take time to look at the flowers Gerry so loved, and they smile when they see an inchworm.