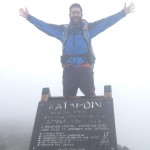 The bad news is that, no, I have not discovered a new type of nut and magic source of sustenance for hiking.  The good news is that my girlfriend Francis and I have created what may just be the tastiest cashew-based snack I’ve ever had.  Perhaps the world has ever seen.  Without further ado, here is the story that led to the creation of “Brazucas” (our name for the snack), as well as the perfected recipe for you to try at home!

In December, Francis visited her family in Brazil for 10 days, a trip she did not know at the time would soon lead to the introduction of a northern Brazilian snack into the world of hiking.  While strolling the beautiful beaches of northern Brazil, she came upon a snack stand selling small packs of cashews. But these weren’t any old cashews.  They were cashews coated in a few sweet and simple ingredients, the kind of cashews I suspect are served in heaven.  Francis brought me back a couple small packages of them, which I finished within a few days, lamenting that I’ve never seen such a wonder-snack before in the United States.

Fast forward to yesterday morning, when Francis and I were eating at a diner and having a typical fun and spontaneous conversation.  “If you owned a type of restaurant or food service, what would it be?” Francis asked me.  I thought for a minute before responding that I probably wouldn’t want to own a restaurant, but that owning a company that created a high quality food product would be very cool. Honest Tea and LARABAR came to mind as two companies whose natural teas and energy bars are both healthy and tasty. And then it hit me. “My company would make the amazing cashews you brought back for me from Brazil,” I said, soon followed by, “We should try to make them ourselves!”

In the afternoon, we went to Trader Joe’s (great post about good reasons to shop at TJ’s) in search of cashews. When we got to the nuts aisle, I scanned for the unsalted cashews. Salted…lightly salted…ah, great, unsalted. I looked at the shelf above the unsalted cashews and my jaw dropped: “Sesame Honey Cashews,” which looked somewhat similar to the ones I had from Brazil. Oh hell no, Trader Joes. You’re a great supermarket and I support you but you just shattered my hopes of being the innovator who brought this product to the U.S. market! Shaken but not defeated, we bought a pack of them to sample, and resolved to make ours even better. In the car we tasted them, and sure enough they were not as amazing as the original from Brazil. Hope was restored.

Trader Joes did not sell the crucial ingredient, sesame seeds, so we drove to another supermarket and picked some up. In the car ride home we discussed possible names for our soon-to-be improved version. We decided to honor Brazil, the great country from whence the candied cashews came, and Francis came up with the name “brazucas,” which is an informal synonym for “Brazilians,” but was used to refer more specifically to the official soccer balls during the 2014 World Cup. Eating these “brazucas” would be a way of channeling the energy of Brazilian soccer on your hike.

We returned home, got to cookin’, and about an hour later (cooling down time included), we had created our premium brazucas!

The cooking method is simple: toast, coat, toast, coat, done.  Here’s the recipe for a big batch.  Francis and I looked at a number of different candied cashew/sesame coated cashew recipes for smaller quantities and improvised measurements accordingly.  You can always add more or less of any of the ingredients to change it up.  Our recipe makes about six 5 oz. bags of brazucas.

Put 4 cups of raw cashews on baking sheets and bake at 300 degrees Fahrenheit for 10 minutes. 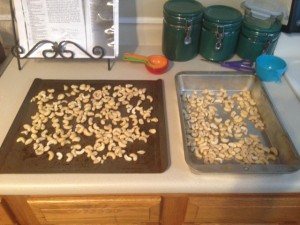 While the cashews are in the oven, mix  in a pan on the stove over medium heat the butter, honey, and cinnamon in the quantities above. 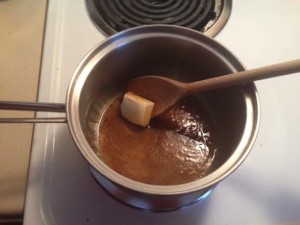 Put the toasted cashews in a big mixing bowl and pour the melted coating over them while mixing with a spoon for even distribution. 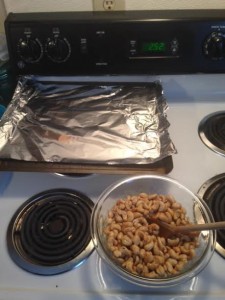 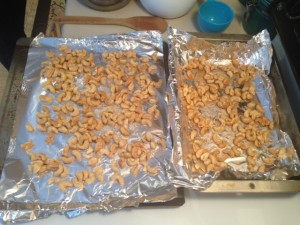 Put the coated cashews back on the baking sheets and bake again for about 15 or 20 minutes until the cashews are a slightly darker color.

Again, while the cashews are in the oven, mix the brown sugar, salt, and sesame seeds as evenly as possible in a bowl. 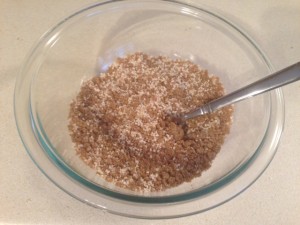 The final step before setting the brazucas out to cool is mixing them with the second coating.  To get the coating all around the cashew, this step works best if you put the cashews and the coating in a bowl with a lid or cover and then shake vigorously for a minute of so.

Put the brazucas back on the pans, let them dry and cool down for about 20 minutes, and then enjoy! 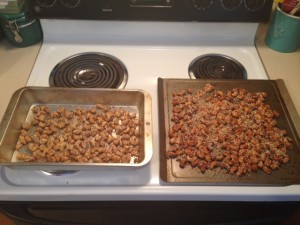 Have fun and let us know how yours came out if you decide to try making them!

Hey! My name is Joe, I'm 24, and I'll be thru-hiking the AT northbound starting March 30th, 2015. I'll be going by the trail name "Psych," because I'm interested in pursuing a PhD in clinical psychology at some point post-trail, and I'm also really passionate about mental health awareness and advocacy. Among many other reasons, I will be hiking to fundraise $3 per mile for the organization HIKE for Mental Health. Along the way, I look forward to blogging here, and also on my personal blog and website to keep people updated about my fundraising efforts.