Two hundred and fifty six miles into my southbound hike, and I’m still struggling to find my mental space here. There’s been great days and not so great days. I’ve been increasingly surprised by just how much I was out of shape from spending my winter off from hiking. I worked out and went on day hikes, but it just wasn’t enough. Certainly not enough for Maine. I’ve been further surprised by just how much harder it is up here than when I was hiking in the south, or at least it seems to be. It’s possible, I guess, that nostalgia and memory conspired to make me see those southern trails through rose colored glasses, but I don’t remember feeling this extremely beat up on a daily basis when I was hiking through Virginia or Tennessee. The elevation changes and terrain here in Maine has been far more difficult than I’d mentally prepared for, and it’s taken some time for me to adjust. 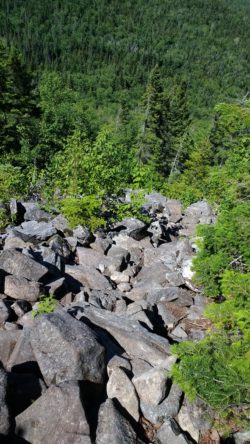 Just in the last few days, I’ve had several bad falls, two of which ended in broken equipment. First, I was coming down off of Bemis Mountain and continuing on the range when my trekking pole got stuck in a root. I flipped over it and fell, losing control to gravity. As I rolled, I felt the trekking pole bend under my side, and as painful as the metal jabbing into my flesh was, the knowledge of the cost to replace the pole was the primary worry on my mind even at that moment. 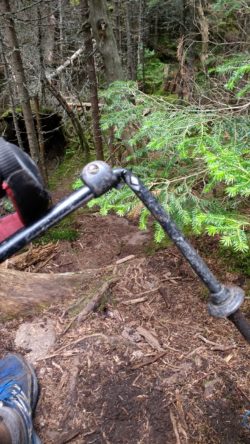 8 out of 10 chiropractors do not recommend a broken aluminum pole to make spinal adjustments. The other two are sadists.

The next day, I hit a rock on Old Blue Mountain and snapped my glasses in half. While significantly cheaper than the trekking pole, this depressed me far more because not only did it leave me unable to enjoy the mountain views or to properly see the beauty of the woods around me, but I also found myself struggling with some daily chores without my full eyesight. While my prescription isn’t terribly severe and I can definitely operate without my glasses (I actually don’t wear them as much while hiking because I sweat too much) I still definitely miss them. Every few minutes I find myself forgetting and reaching to my face trying to adjust glasses that aren’t there. Then I remember and question again what I’m really doing here. 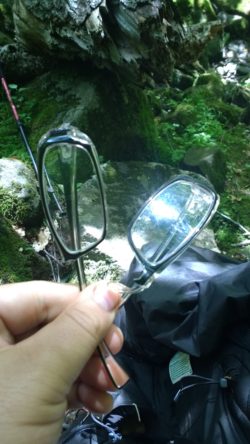 After the hundred mile wilderness, we’ve gone through a number of mountain ranges, including the Bigelows, Crockers, Saddlebacks, and Bemis’. There’s been some spectacular views, but more importantly a regular pounding of up and down climbs combined with running along ridges, all getting into the flow of daily hiking life. I know worse is still to come with the Whites and the Presidentials looming over the horizon, but I keep hoping that every day I can keep going gets me more and more into the kind of shape I’ll need to be in to survive that onslaught. 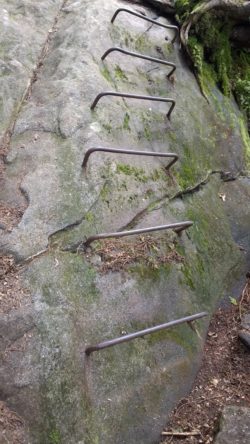 They didn’t have these at my gym back home

Weather has been a different kind of obstacle. After regular rains throughout the Wilderness, I had come to some relief with a week or two of warmer and drier days, but summer thunderstorms have once again raised their ugly heads. While I was generally comfortable with my tent setup, I’ve recently come to know that I still need to get in some practice with setting it up in the rain. The “bathtub” portion of my tent has earned that name in an undesirable manner once or twice when I was not as careful in my assembly as it was pouring buckets over me. Having an inch or two of water in my tent that needed bailed out was not a pleasant way to end the day.

My energy level has taken some time to adjust as well, and this has inevitably been connected with adjustments to my meal planning. As always, protein and fat has been my main focus, but finding meals that provide the correct level of calories while ensuring an appropriate level of effort (I don’t like to cook in the morning if I can help it), variety (who wants to eat the same thing for every meal?), as well as nutrition, has taken time. I’ve got a healthy mix I use for breakfast which I call my “feed bag,” a giant freezer ziplock filled with a mixture of granola, cereal, chocolate pieces, and nuts, which I’ll also occasionally munch on throughout the day. Lunch is some combination of meat, either pepperoni or salami, with cheese, sliced up and either eaten straight or on a tortilla, depending on the resupply options in town.

I was doing Knorr Pasta sides for dinner, a reliable choice I used through most of my hike last year, but I’ve struggled so much with wearing out early in the day that I decided to try something new. I think I’ve found a recipe that works well for me now, and its got the right balance of flavor and nutrition that I’ve been pretty happy with it. I should also say it has had some more benefits in the “regularity” department, which I attribute to the fiber being brought to the table.

A double seater privy with a cribbage board. For truly awkward first dates

My dinner recipe has been as follows:

One cup of either instant barley or quinoa. A mix of the two also works. This depends on the options at resupply. Instant brown rice could also work here.

One or two tablespoons of chili powder, depending on your taste for spice.

Add enough water to cover the mixture. I add a little extra because the broth is pretty tasty and I like to have extra. Bring to a boil over your stove, then reduce to low simmer for 6-10 minutes. Stir frequently to prevent burning. I have a 1 liter cook pot, so there’s enough room to make sure it won’t boil over. Once the barley or quinoa is tender, remove from the heat. Stir in two tablespoons of parmesan cheese and a pouch of tuna and let the pot sit to cool a bit. Serve up and be prepared to sleep well after eating. (edit, I’m switching this up this week and adding lentils instead of tuna, I’ll let you know how this goes) 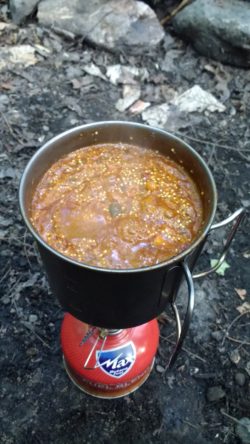 Socially, I’ve been struggling too. I’ve met several hikers I like, and enjoyed some great conversations. Gentle Ben, Five-O, Alias, Steppenwolf, all great folks, but with my slow hiking speed, inevitably they’ll pass me up and I won’t see the same people for more than a few days. It’s hard to avoid feeling alone when you don’t have consistent social connections, but I get by. I read a lot, and I’ve been working on getting meditation into my daily routine slowly. I try to savor the time that I have, reminding myself there will be plenty of people back home when the hiking is done, but these days in the mountains are fleeting.

There was one other moment that I need to share, one of the more moving experiences I’ve had lately. And it wasn’t mine. While hiking out of Stratton, I stopped early to enjoy a campsite of my own. I brought a bottle of wine (transferred to a plastic bottle for packing out) from town and planned an evening of wine and singing along to the “Buffy – Once More With Feeling” soundtrack album. (I have odd tastes in entertainment) I was sitting in my campsite thirty or forty feet from the Trail when a female hiker I’d seen in town passed by hiking south. I said hello and she stopped to chat for a moment. While we were talking, another hiker was coming the opposite direction (north) down the hill. I’d seen several northbound hikers today, so at first I didn’t think much of it, but I recognized this hiker as a guy I’d run into once or twice in the last few days. I said hello and he stopped as well, but he was primarily focused on the female hiker I’d been talking to. Apparently he knew her pretty well and they started chatting. Her and I were both surprised because he was hiking in the opposite direction he’d been going and we remarked on it. He’d been in town the same time I was, but he was apparently headed back. He started talking to her excitedly. Apparently he’d been hit with some inspiration while climbing the mountain and had decided it was time to go home. Not because he was done hiking, he was very forceful in saying how much he’d loved it. But he had been struck with something, a passion and inspiration that made him feel like he simply needed to go home and get to work on it right away. Apparently, this was something the woman was already familiar with from previous conversations and they started chatting excitedly. He was leaving, but it was a victory not a defeat. I watched the conversation between the two of them from a slight distance, and it was touching. He was telling her goodbye, but she was excited for him. His own excitement was palpable, even from where I stood as someone who barely knew him and what was going on. He was smiling and looked like he was ready to explode. I felt a deep yearning in my heart for that passion and purpose and said a silent prayer for him. I thanked God for his chance, hoping he’d experience fulfillment and thankfulness that he’d been blessed this way. He hugged the young woman and they both resumed hiking in opposite directions, both seeming to forget I was there. I was thankful I’d been able to observe this moment, hoping it would lead to a fruition for him beyond his imagination. I can’t help but reflect that despite the fact that he’s leaving the trail early, his thru hike has been successful. He has a victory that people who do the whole trail may miss out on. He’s accomplished his “why.” He came out here to get something from the Trail, and the Trail provided. I hope we all get that moment someday.

Why ARE there so many songs about Rainbows, Kermit?