Warning. This is only tangentially related to thru-hiking the Appalachian Trail. Sort of. Feel free to ignore.

But folks keep asking me how I came up with Pearwood as a trail name.

The short answer is that it has been my online moniker ever since I open my account at https://pearwood.deviantArt.com almost sixteen years ago.

Once upon a time, well nigh two decades ago, my evil gamemaster son, Lanse spielorjh.deviantart.com, pulled me into a PBEM (play by email) game where I took the part of a certain Radagast, a hobbit, who had somehow acquired a staff of sentient pearwood.

When I signed on at deviantArt.com in January 2005, I had to choose a username. “Radagast” was already spoken for so I selected “pearwood”. I’ve been pearwood ever since. 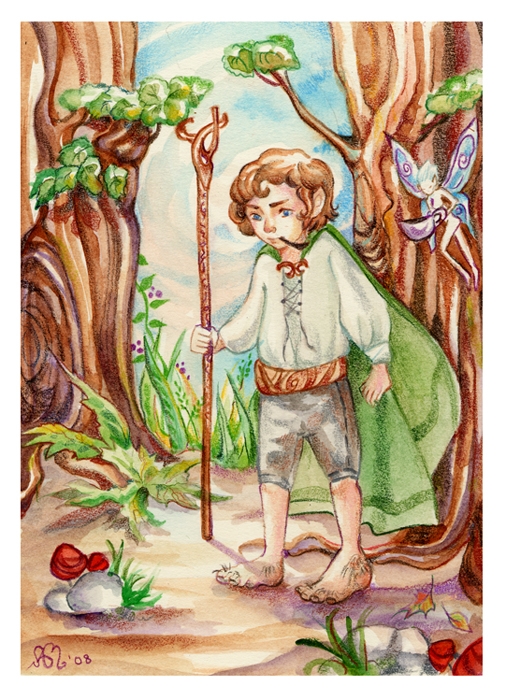 Before the water becomes too deep and too rough to walk, Havilan comes unexpectedly upon a small alcove off to the right of the corridor. It is dry, and just large enough to contain a cheery campfire and a relaxed hobbit, who is accompanied by a large wooden staff, and a backpack.

“Hello, stranger!”, calls Deetwunny to the small one. “Mind if we join you and rest our weary bodies, recharge our magic, and generally be refreshed? Here, don’t get up, I’ll make it big enough to accommodate. TERRA EXPANDEUS!” He says, waving his hands.

There is a appropriately magically squishey noise, and the alcove is large enough to comfortably sleep five. This seemed easier than it should have been,

Then he shucks his bloodied clothing (He’s wearing underwear, and there are no female gnomes around anyway) and puts on his wet-but-still-good simple tunic and rock mail. He jams his wand into the ground to recharge, and falls to the ground himself, exhausted. Soon, deep snores ensue from his gnomic gnose.

Havila peers suspiciously at the hobbit, then glances down at his dagger, then at the halfling’s various belongings. He appears to think deeply about something. With a fairly obvious mental shrug, he flits to within a few feet of him, and examines him closely. “Who’re you? You’re not a fish, are you?” Assuming an answer in the negative, Havilan continues: “Well, it looks like you’re our host for the night, like it or not.” Havilan glances at the somnolent gnome. “I am Havilan del’Marcos, that” a gesture at Deetwunny, “is a pompous gnome gnamed Deetwunny, and these are some other guys. I’ve already done one introduction so far, and I’ll eat my dagger before I’ll do another one. Incidentally, would you happen to have any treasure on hand?” Havilan doesn’t wait for a response, instead flying out to perch on and examine the protruding stone in the chamber. His sparkles have resumed normal color, but are currently floating up out of the top of his head instead of sifting gently downwards. And all of modern science is baffled as to how a six-inch faerie can wield a nearly-foot-long dagger one-handed. It’s kind of like how bumblebees fly. It just is, and no one can explain it.

“Indeed they are,” replies the hobbit, “and it appears that you all have had quite a time with them of late. But do come in, all of you, and warm yourselves, now that friend gnome has made my little alcove sufficiently commodious. I must say that adding the coat hooks in the process was a nice touch.” At that, Radagast (for that is his name) pats his staff. Sufficient quantities of drift wood are about to provide us with a quite ample fire.

“And now that sir Havilan of the exquisite dagger has introduced himself and the esteemed gnomic wizard, it behooves me to do likewise.

“I am called Radagast. Though I am but a humble hobbit, I was named in honor of the quiet wizard (surely you have heard of him) of whom I have long been an admirer. Not much of an adventurer by nature, I have nonetheless managed to find myself in all sorts of interesting times and places. Along the way I have attained a passing familiarity with various watercraft, and have navigated upon a roc (he bowed in Tawashu’s direction) though eagles are more my size.

“In my travels have spent some years in the city bearing named for the gnomes (though the humans, as might be expected, misspelled it), as well as will the silvan elves. They do make a fine coil of rope,” he said, patting his knapsack. “The knife was a gift from the gnomes. They seem to have imbued it with some of their skill in getting into things,” he grinned.

“You look at my staff with curiosity. Yes, it is a bit unusual for a hobbit to carry such a one as this. It was given me by a wizard I traveled with for a while. In truth, he was more than a little disgusted with it, for it seemed not to enable him to do any of the wizardly deeds of power that such a staff ought to do. So he gave it to me. It was a gracious enough gift, I suppose, in spite of his displeasure with it; it is magnificently carved. It and I are inseparable (he eyed the staff contentedly). I came close to losing it a time or two, but it seems to find its way back to me.

“While it does no particular wizardry for me, it does seem to enhance the powers of wizards who come along side me as friends. Mr. Deetwunny (did I pronounce his name correctly?) indeed had a look of surprise upon his face at the size and accommodations of the room he so kindly expanded for us.” He patted the staff again.

“How did I get here, you may well inquire. I was taking my usual short cut through the forest as I was enroute from Quixell to Forestport. I never could understand all the fuss about the forest. Compared to Mirkwood it is quite aerie, though I must admit that it tends to be considerably less friendly, or at least to be a lot more choosy about whom it picks to be its friends. I am afraid I was paying more attention to refilling my pipe than to watching where I was going. Daydreaming, I suppose. At any rate, I found myself progressing rapidly cellarward as a section of forest floor disappeared beneath my feet. I managed to avoid or disarm the welcoming traps. When things calmed down just a bit I found himself in this gnomish tunnel and decided to make the best of it. A rockslide behind me did help me decide that moving forward held greater promise than trying to go back.

“So here I am. I was following some ways behind you until the room with the tile trap. I came into the room just as the tiles upended you all and found myself in the lake with you. A good rap from the staff on the snout of an investigating shark helped him see the light, or at least the stars, and he consented to take me across the lake. He avoided the unpleasant commotion with which all of you were occupied and quickly came to the mouth of the tunnel. We avoided the chains, but the poor fellow zigged when he should have zagged and both his forward progress and his life came to an abrupt end on a spike in the tunnel. I suspect you may have seen him there. Such a shame, he was so much more obliging than his fellows.

“I, on the other hand, was thrown clear and over the falls I went. Fortunately for me, the staff is remarkably buoyant; it brought me quickly to the surface. The monstrous squishy fellow who caused you such distress seems to have taken no notice of me as I floated past. I guess getting past things without being seen is one of my, shall we say, more useful skills.” At this he grinned sheepishly. “I hauled myself out of the water on this convenient, and now much larger, alcove. I figured you all would be along eventually and might be in need of some warmth and a chance to rest.

“A bit of company would be pleasant at this point. And while I have dodged the assorted fiends thus far, perhaps being in company with those more adept at weaponry would be an advantage. In return I might be able help you past a trap or two.

“As for treasure, I have none, just a few tools in my bag. And a pipe. Say, would any of you perchance have a bit of pipeweed upon you? I lost mine when I first fell into this most fascinating maze.”

With that, Radagast quietly lifts a pot from the fire and offered the travelers a cup of tea.

That much, at least, had not gotten away from him. As he only carries one spare cup, they would have to share.

‘Rini flits over to the hobbit and gives a small bow, Faery-style. “My good Hobbit, it is pleasant to meet someone with such genteel manners. And tea! How gracious of you. My name is Rini, of the Fae Court of the Forest.” She smiles at the hobbit.

I am a photographer, walker, and sometime paddler, a theologically-educated geek living in Rochester, NY. Once upon a time I was an Army helicopter jockey in Alaska. I started with film, switched to digital, then went back to classic film cameras. With major back surgery in August 2019 and bunion repair in January 2020 now behind me, I am gearing up to start Appalachian Trail northbound in June, 2021 to celebrate my seventy-first birthday. Blogging for The Trek