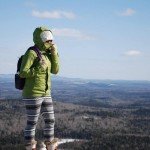 Catching Up: The Journey So Far

A Note From The Author

Hey there readers! Sorry I haven’t caught you up on my latest On The Trail adventures in quite a long time. The day by day recaps have been a bit too cumbersome to keep up with out in the backcountry so I wanted to update you on Virginia, West Virginia, Maryland, Pennsylvania, and New Jersey so far, segmenting into highlights as opposed to a timeline. This will most likely be how I post updates from now on, so I apologize to anyone who was enjoying following my previous trail breakdown. As always, thanks for reading!

I also quickly wanted to post a disclaimer for all of my future blogs. Tenderfoot and I are ambassadors for and/or have been given discounts on gear by the following companies: Hyperlite Mountain Gear, Feathered Friends, Vargo Outdoors, Marmot, La Sportiva, and Thermarest. Although we try to remain unbiased towards any one gear brand or another, we are incredibly thankful to these companies for supporting our journey.

My heart is filled with joy by the people we’ve met on the Appalachian Trail and its surrounding towns, as well as by our friends and family that are cheering us on from home. We’ve had the opportunity to meet some of the most spectacular and unique individuals I’ve ever had the pleasure of knowing. It’s so hard to even sum up the sense of belonging, the feeling of being a part of a trail family, the care you have for one another after only a few short months of having met. After Trail Days, Tenderfoot and I were separated from the bubble that we had been traveling with since the first month of our trip. Friends like Ron Jon, Walnut, Ginger Snap, Oso, Mambo, and many others gained a week on us during our time off. But it was good to see a handful of familiar faces that joined us at Trail Days as well, including Spielburg, Spidey, Snap, Jelly Ankles, Cheetah, and Buckeye – many of which we hadn’t seen in weeks. We also met a lot of new people at the event as well, including Hyperlite Ambassadors Porter and Bloody Mary, YouTube trail sensation Red Beard, winter southbounding legend Jabba (aka The Real Hiking Viking), and Appalachian Trials’ very own Good Badger.

Upon returning from Trail Days, we found ourselves in a bubble with unfamiliar faces, a feeling comparable to being the new kid at school. And although we missed the bubble that we had left, our new bubble has just as many wonderful and inspiring people as the last. We find ourselves laughing a lot, hiking hard, and finding that delicate balance between laziness and over ambition. In our new bubble we were also reunited with our great friends Scuba, A$$ Captain, and Bubbles, who all took similar lengths of time off from the trail when we did. Having travelled with Scuba since the Roan Highlands in Tennessee, and with the Mayo Boys since Fontana Dam, North Carolina, it was a sight for sore eyes when we found ourselves together again in Duncannon, Pennsylvania.

Along with Trail Family, we’ve had a lot of fantastic experiences with actual family as well. Following Trail Days, I was reunited with my parents who joined us in the Shenandoah National Park. It was so good to see them for the first time since saying goodbye on the bus in Maine two and a half months earlier. Everyone on the trail, especially Tenderfoot and I, were so impressed by their perseverance through the rain and how fast they crushed 80 FREAKIN MILES! Thanks for all the cheeseburgers at waysides and the endless support guys. I also want to shout out to my relatives from Pennsylvania – Courtney, her husband Brad, Heather, and Debbie. We had an absolute blast in Boonsboro, Maryland with this group, and I cannot thank them all enough for their encouragement. Seriously, I have the best family. Tenderfoot and I miss all the Jackson’s and Perkins’ back home too, and we love you all!

Finally, I want to give a shout out to all the Trail Angels we’ve met along the way. There is nothing quite as pure as a complete stranger giving you a lift into town, feeding you, or giving you a cold soda on a hot day simply because they believe in you and what you’re doing. It has lifted our spirits more times than I can count, and is so inexplicably appreciated.

It’s hard to believe we’re eight states down now. We’ve seen so much in the past month, and hit so many milestones that it’s hard to know where to even start.

In order to keep ourselves on schedule for Trail Days and meeting my parents in Waynesboro, we ended up having a few extra days on our hands around mid May. That meant the opportunity to take a little extra time enjoying the different towns and hostels along the trail. Catching up where I left off coming out of Damascus, here are a few highlights from lodging:

These past few states have certainly given us cause for celebration. We broke 1,000 miles just before crossing into West Virginia, we stopped by the Appalachian Trail Conservancy Headquarters in Harper’s Ferry (aka the psychological halfway point), we crossed the Mason-Dixon Line officially re-entering the north again, we hit the official 2016 halfway point at mile 1,094.5, completed the Half Gallon Challenge, and we passed our 100th day on trail. It’s been pretty remarkable actually getting to all of these milestones after picturing them for so long. 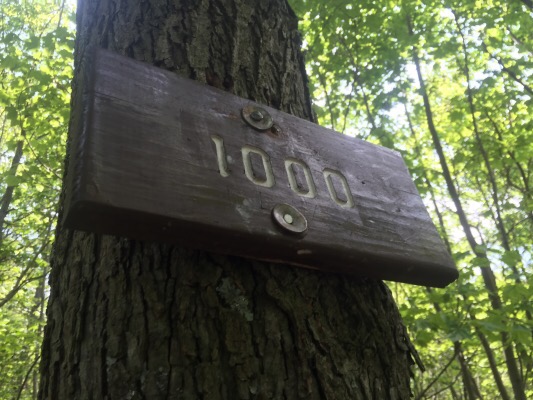 The AT has given me the opportunity to see some of the coolest treasures the east coast has to offer. I’ve seen ponies and rainbows in The Grayson Highlands, I’ve camped with Dragon’s Tooth towering over me, I’ve watched the clouds clear over McAfee Knob, and I’ve seen seasons change in front of my eyes. It’s been pretty cool. 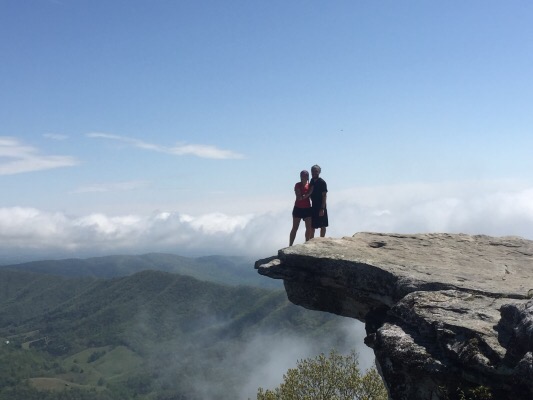 Just a few other random updates:

That’s all for now! I’ll be catching you up on my travels soon, but if you want to follow me day by day, check out my Instagram!

Hi! My name is Kendra, and I'll be starting my NOBO Appalachian Trail thru-hike on March 4th, 2016. I'm a proud Mainer, and a recent Husson University Marketing Grad. Joining me will be Tyson, my best friend for over a decade and the love of my life. This will be the first of many long distance adventures, so follow me on my journey from Springer to Katahdin!