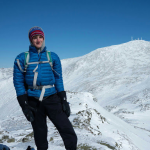 The obsession of hiking and exploring nature has dominated my life since it was introduced to me when I was in middle school. For most people, this would seem like quite a while ago but for me, it’s just a few years. My dad took me on some hikes in middle school to a few mountains in the Whites, but I first learned of the crazy thing known as thru-hiking a few years later while on the summit of Mount Katahdin. There was a group of hikers that you could smell coming from a few hundred meters away who said that they were finishing the AT. Instantly I knew that I wanted to do that same thing even though at the time I was very young. To work so hard just to see that sign again, and make it a multimonth journey seemed ridiculous, but oddly appealing at the same time.

Currently, I am working my way through my senior year in high school. I have had this plan since freshman year, so I will be graduating in January. In this past year, I have spent every available weekend in the White Mountains, whether it is doing the one-day Pemi Loop, or just exploring new mountains through ridgerunning with the heavy pack. These long days led me to something that combined a couple of my interests: it was called ultrarunning. After training for a couple of weeks I decided that a 50k would be a good idea since it would be fun to do one before I turned 18. A couple of weeks later I found myself at the start of a last man standing event. One hundred kilometers later my legs wouldn’t lift. Not bad for only two weeks of training. February will be the start of the big journey. Yes, this is an early start to the trail but there is a reason behind it. I have always enjoyed hiking long days from well before sunrise to after the sun has set. For this reason, I want to leave something open as an option for when I finish the AT.

As most people know there are two other trails: the PCT and the CDT. It all depends on how the AT goes and if it goes as well and quickly as I hope. I am doing all of the preparation as if I will go on to do the Calendar Year Triple Crown. I will leave the door open for if it seems plausible after a couple of thousand miles in the Appalachians. The daily mileage that would be required: That’s not too insane. The cost: It would fit into the budget, barely. The physical and mental demands: Keep tuned.

I won’t have a ton of posts leading up to the start, but I will do periodical updates. Once I start the goal will be to post almost daily throughout the adventure.

I just graduated high school in Kennebunk, Maine. I love anything outdoors including running, hiking climbing, and everything else! AT thru-hike starting on March 1st and maybe more trails to come!