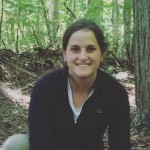 It was back in August when I first met Miss Janet, a well-known trail angel. Four other SOBOs and I were at Crawford Notch when she pulled up in her famous van. Miss Janet offered us all cold sodas, perfect trail magic on a hot summer day. Then she proceeded to tell us about her Hiker Thanksgiving in Hot Springs. 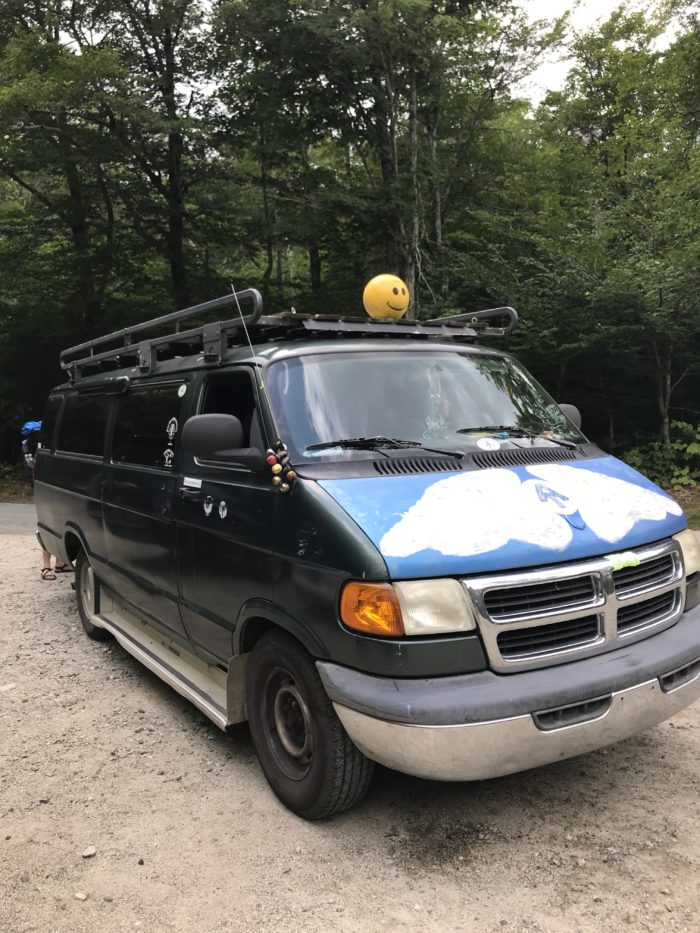 ”Most southbounders think they’re going to be done by Thanksgiving, but in reality, they aren’t, so I put on this Hiker Thanksgiving for everyone still on trail,” she explained.

In my head I thought, “Psh, I don’t need to listen to this—I’m going to be done by Thanksgiving!”

But as time went by, it became clearer that I was not going to be done by then. Therefore, I started getting excited to celebrate in Hot Springs with my AT family.

Leading up to the Holiday

After hiking a lot on my own, all I thought about was this great celebration where I would get to see many friends and indulge my hiker hunger. Looking forward to the event motivated me.

By Wednesday, Nov. 21, I was nearly high off of my excitement. I hiked to Davenport Gap, so I had to figure out a way back to Hot Springs. Luckily, a couple that had hiked the year before were coming up from Atlanta, so I arranged to be picked up by them. Unfortunately, they weren’t getting toward my location until 8 p.m., and it was only 1 p.m., so my idea was to hitch a ride into Asheville. That way I might be a little easier to pick up and I could hang out, explore, and resupply.

The first car was a no-go, but the second car stopped. It was a family with three kids packed full for their holiday road trip. They were curious about my journey and concerned for my safety hitching, so they made some room for me. Success! As we drove to Asheville, we talked about my adventure and bonded over our shared passion—all Patriots and Red Sox fans! They took me to the grocery store and kindly offered to buy me lunch before they continued on their way. The generosity I encountered along the trail blew me away.

Around 8 p.m., Just Jeni and Atlas picked me up, and we drove to Laughing Heart Hostel in Hot Springs. There, I was excited to see Gizmo and Hot Rocks and meet a few others, like Toots, SOS, Fluffy, and Highlight. Finally, Hiker Thanksgiving was upon us!

First of all, I slept in… to about 8 a.m., which is a lazy morning considering I’m usually up around 6:30 a.m. Once I woke up, got ready, and ate a small breakfast so not to ruin my appetite, I helped Just Jeni and Atlas with some cooking. But the best part of the morning was seeing bunches of my friends roll in: Lost & Found, Search & Rescue, Flower Power, Quick Fix, Sweet, Scraps, Woody, Croatoan, Montra, Sammertime, and more. Reunited and it feels so good. When the time came to head down to the community center for the celebration, I teemed with excitement, and my stomach rumbled with hunger.

Miss Janet asked me to round up all the thru-hikers. She wanted a group of thru-hikers to participate in a pie eating contest. Woody was first to volunteer. Eventually, I was able to get Scraps, Quick Fix, Search & Rescue, Millie’s Mom, and myself on board. After the giant family photo and Miss Janet’s introductory speech, it was game time. 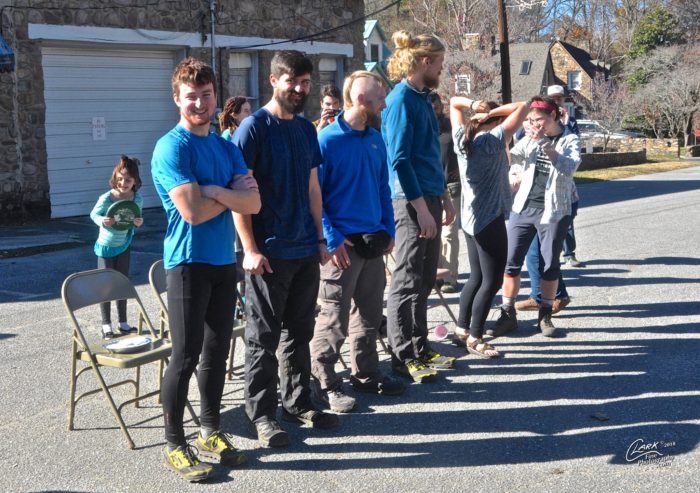 From left to right, Quick Fix, Search & Rescue, Woody, Scraps, Wildlife (me), and Millie’s Mom getting ready for some pie eating. Photo courtesy of Dean Clark.

They placed a chair behind each of us while we faced the opposite direction. Millie’s Mom and I were the only ladies, so we teamed up to tackle one pie together. We had just met 30 minutes prior, and we were about to become pie sisters. Miss Janet instructed us to put our hands behind our backs and that we would not be able to use them. The crowd counted down… 3… 2… 1! We spun around to face our pies.

It was a Cool Whip kind of pie. My first strategy was to take bites of it. I stuck my face in first. Then Millie’s Mom, then me, and so on. To our left, Scraps was making more progress by sucking and slurping up the liquidy pie. Millie’s Mom and I adapted our strategy. The crowd was cheering, laughing, and placing bets. 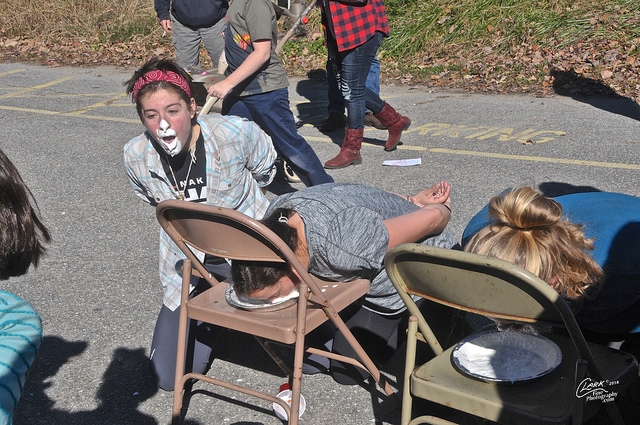 Millie’s Mom takes a break as I suck up more of the pie. Scraps on the right is pretty much done with his. Photo courtesy of Dean Clark.

After a couple of minutes it was over. Scraps was the champion! I’m pretty sure Millie’s Mom and I came in second, but we did have the advantage of having two people. Cool Whip/whipped cream covered all of our faces. It dripped onto our clothes. Everyone was laughing. 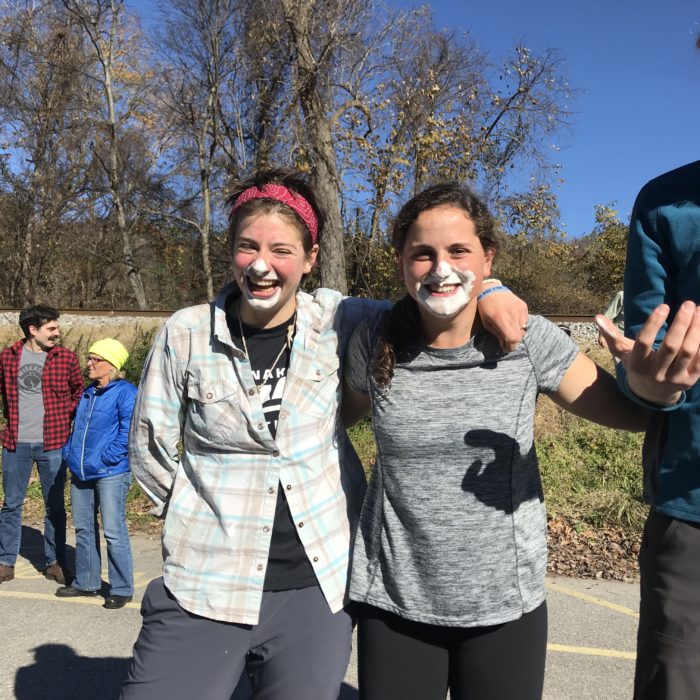 Personally, I think the pie contest participators should have been able to get their food first, but while we cleaned off our faces and clothes, most others got in line to get food. Though there was plenty of food to go around. Several deep-fried turkeys, stuffing, a massive pot of mashed potatoes, green bean casserole, sweet potatoes, mac and cheese, gravy, and much, much more. It was all amazing. My only issues were the lack of a vegetarian stuffing and the allergic reaction I had to something that must have had tree nuts hidden in it. But my hiker trash self paid no mind and carried, on eating two plates of the dinner followed by a plate of dessert. My stomach simultaneously loved and hated me.

I talked with friends, new and old-ish (as most of my AT friends are new). We told stories of our hiker trashiest moment on trail. Mostly just eating food from the ground. The saying goes: a day hiker will leave it, a section hiker will brush it off and eat it, but a thru-hiker will just eat it, dirt and all. We consoled each other on the terrible weather we endured. We joked and laughed, and I filled up not only on food, but on memories and happiness. I know that’s extremely cheesy, but it’s the truth. 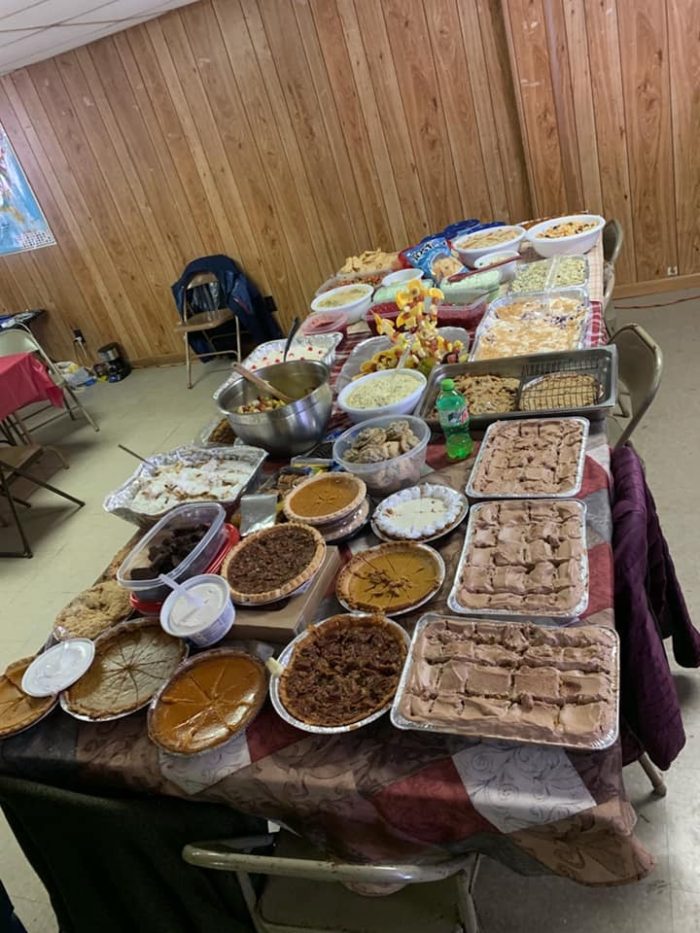 When the meal started to wind down, Miss Janet sat down to talk to all of us, especially the thru-hikers. We counted off—34 or so, not including Sammertime and a couple others who were missing. Miss Janet told us stories and offered advice, mostly about heading back out into the real world, which would soon be upon us. She also did some trivia to give away some gear. I answered the first question for the girls before she could even finish asking.

“Thirty percent!” I yelled. She tossed me the prize. Thirty percent is the percentage of thru-hikers that are women. I knew the answer to the next question, too, but I mouthed the answer to Lost & Found so someone else could win. I’m such a good sport. Sammertime once recommended that I change my trail name to Trivia. 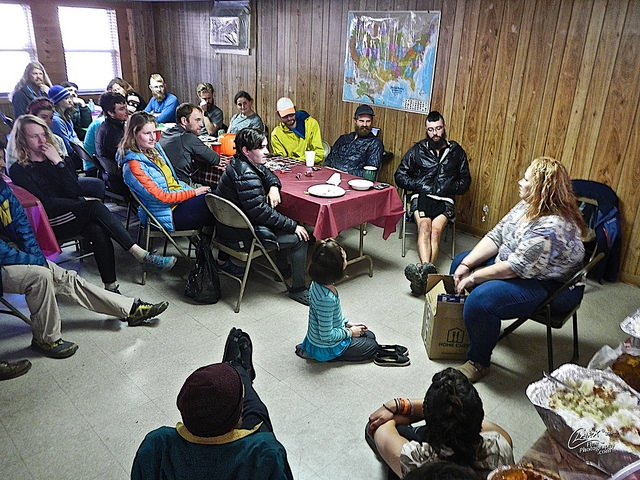 Miss Janet talking with us all and giving away prizes. Photo courtesy of Dean Clark.

The rest of the day flew by. A couple of us drank a beer each at the local pub. My tolerance is crap in the first place, and the hiker metabolism only amplifies this. Buzzing from one beer, I went back to the community center for round two. Several of us helped Miss Janet with cleanup. Then we headed to Laughing Heart to hang out for the rest of the night. I particularly enjoyed talking with G-man and Landslide, whom I only met earlier that day. They had been hiking with Smiles, a member of my tramily who I parted ways with in Pennsylvania. We bonded over our love of Smiles. I hoped to see him and Fin at Hiker Thanksgiving, but neither was able to make it. I sent Landslide and G-man with a message for Smiles… a big-ass hug.

Like many others, I was pooped. It was a long day, and the food made me sleepy, so I didn’t stay up too late. I went to bed a little sad and nostalgic. Thanksgiving was my last zero and the last time I would see so many of my friends. It was one of my favorite days of my journey. My advice to aspiring
SOBOs or flip-floppers is to make sure they go to Hiker Thanksgiving in Hot Springs. It’s an event you won’t want to miss!