Chillin’ at the Holiday Inn

This post is long overdue. It’s from my first week on the trail. Wifi has been really difficult to get ahold of.  A lot of places claim to have wifi, they just don’t have wifi that works.  I’m having a great time out here!  No tears or thoughts of quitting yet.  There are so many nice people out here with amazing stories.  Hopefully I’ll be able to give an update on the past week and a half tonight or tomorrow.

Miles in the double digits!  What???  Yep.  I saw a bear but I feel like I cheated.  The trail crossed a road and I saw a few people walking down the road toward something.  They said a man on a motorcycle told them there was a bear a little ways down the road, so I went to check it with them. It was just a little guy laying behind a tree and there were about 7 people taking pictures of it.  Not the bear experience I was hoping for.  I felt like I was at the zoo.

That night I hung out with Brittany, F*****n’ Majestic, GrahamCracker, Ken, Sean, Alexandra, and Jessica.

GrahamCracker is 15.  He was out on the trail with his dad for spring break.  They left me with some caramel lattes that I can make with my JetBoil.  So good!

Brittany is awesome and Scout is so sweet.  When she was packing up her stuff in the morning he kept looking at me (I was still in my sleeping bag of course) and then he finally walked over and sat right down on top of me.  Scout loves the sleeping bags.

Alexandra and Jessica are 25 from Virginia.  They’ve been best friends since they were little and they plan on hiking half of the trail.

There was a guy in his late 20’s-ish who walked up to us while we were hanging out in the shelter.  He was weird, animated, talking to himself and he clearly snorted something because he kept pinching his nostrils and rubbing his nose.  Then he told us he would trade hiker crack if we had any chronic (weed).  I don’t know what hiker crack is, but I don’t want it.  He left.

I slept in the shelter with Sean, Kenny, F****n’ Majestic, Brittany, and Scout.  Everyone fell asleep but I couldn’t so I was just looking out of the shelter.  The moon was really bright so I could see pretty much everything.  I was looking into the woods for creatures (I look for bears 24/7) and I saw something moving along a post at the front of the shelter, but I thought my mind might just be playing tricks on me.   Then a mouse hopped down and scurried across the floor of the shelter.  I sat up immediately and started like hypervitilating stuttering trying to get the words out, but all I could say was “Ohhh ohhh ohhh my oohhhhhh ohhh ohh my god.”  Sean unzipped his sleeping bag and reached for his trekking poles ready to fight off the danger.  I finally managed to get the word mouse out after waking up and scaring everyone in she shelter.  Sean flopped back down and said “Jesus!  I thought there was a bear.  Next time say the animal name first, before you start freaking out.”  I was still sitting up terrified.  I saw another one and then closed my eyes for the rest of the night and repeated in my head “If I can’t see it, it’s not there” until I fell asleep and I didn’t open my eyes until morning. 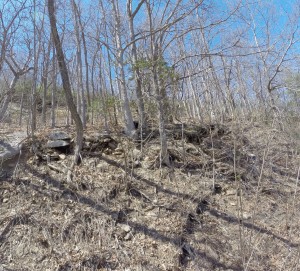 You can see the bear if you look closely

I hiked with Sean, F****n’ Majestic, Jessica, and Alexandra today.  We sometimes hiked together, and sometimes at different paces.  Kenny leaves first and gets to the designated area hours before the rest of us.  I always leave last but I usually catch up to Sean.  And F*****n’ Majestic likes to hike ahead and then wait until he sees us to start moving again.

It’s really funny being out here.  You see familiar faces all day, every day.  I went down a hill where I found about 7 other hikers that I knew, as well as a father and son that I hadn’t seen since the first day.  The son, about 10 years old, said that he wanted to see “those people” again-meaning the hikers he met that first day, so the dad calculated the amount of miles we would probably have done each day, and they did a weekend hike going South so they could see us again.  That was really neat.

This 15 mile day was a very long day.  I’ve been so lucky with the way my body has held up (knocking on wood as I type this).  I’m one of a very small minority that has no blisters yet.  The only things that are bothering me are my heel and my hip.  My left heel sometimes feels bruised when I’m going up hill and if I take a long step with the back of my shoe pressing against my heel I get a surge of pain.  You know when you hit your funny bone and it’s like a zing of pain that you just have to wait for it to go away?  That’s what it’s like but with my heel.

My left hip has been getting really tense also.  I’ve been trying to stretch everyday and stretch that hip in particular.  It’s not so much painful as it is uncomfortable.  I don’t have my trail legs (legs made of steel that can crush mountains) yet so I don’t think there will be any more 15 mile days any time soon.  For the first time since I’ve been out here, my feet hurt, I felt really grimy, I was exhausted, and I was sore.  But on the plus side, it was a beautiful day and I’m still enjoying my vacation.

PS: I saw a dead bear.  It was a cub and it looked like it had just fallen asleep with it’s belly up.  It was kind of like the movie Stand By Me where those boys are heading out to find a dead body.  They’re all excited and then they get there and they’re like oh, this is actually sad.  That’s how we were.  But this one girl cut the bears claw/finger off as a souvenir.  I’m not entirely sure what she cut off-I didn’t see it.  I thought that was badass but also kinda sad. 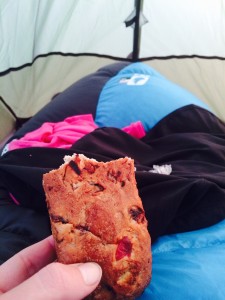 Breakfast in bed. After hiking for the weekend a couple was getting picked up at a road crossing by their son. The son worked at Einsteins Bagels and always grabs some when he leaves work. He was kind enough to give us the bagels, which Majestic passed out the next morning. I ended up with a bagel loaf thing that was really good. 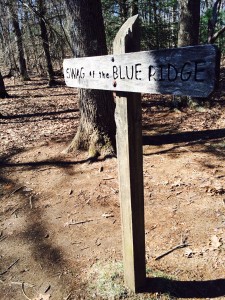 A group of about 15 high tailed it to Hiawassee today.  We heard there was Mexican food.  About half of the group stayed at Top of Georgia Hostel, and Sean, Majestic, Alexandra, and Jessica and I stayed at the Holiday Inn.  I love the Holiday Inn. We had 2 queen beds, and a pull out couch that could have slept 2, a fridge, microwave, good size bathroom, kitchen table, flat screen, and complimentary breakfast.  Plenty of room for the 5 of us, and also a pool and hot tub that we played in after dinner.  Majestic swam in his shorts, Sean in his underwear, and Jessica and I in our leggings and shirts.  Alex is sick and I feel really bad for her.  There are also a lot of hikers here.  I walked down the hall and ran into Walter White, Zip Code, and a German couple I’ve seen a few times.  They even have a hiker box here at the hotel!  A hiker box is a box they put out at hostels, outfitters, and hotels that you can dump stuff you don’t want into.  One man’s trash is another man’s treasure.  It sounds like there would be nothing good in there but you’d be surprised.  Brittany found a new RuffWear pack for her dog, Majestic just found a silk sleeping bag liner (those things are like $60), and I found a lot of dehydrated veggies that were unopened.   I’ve only contributed a book so far.  I thought I could read it fast and then cut it in half, but I couldn’t.  I caved in to downloading the e-book instead. 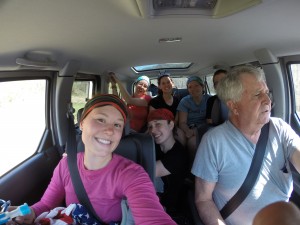 Catching a shuttle into Hiawassee with the girlz 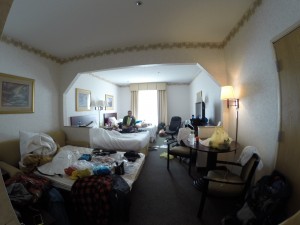 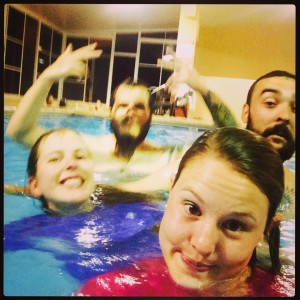