Hi! Yes, I finished hiking the trail in September. No, I haven’t finished blogging. Getting there.
8/21 Friday – Day 167
* 2,000 miles! Two thousand miles. One thousand miles and then another one thousand miles. That Proclaimers song — twice. Seventy-three marathons and change. Walking from Georgia to Maine.
* It began raining during the night and continued into the morning, though it cleared up after several hours. When we reached the trailhead to Stratton, we saw our friends loading up into a pickup they had just hitch. So, we ran down to get a ride, as well. Lucky for us, there was just enough room.
* I promise. I didn’t intend to stay in Stratton. But seeing as how things were… Stratton has food and beer and shelter, it was raining, the friends were all staying, and there was a big sign that said karaoke. There was a momentum and flow that simply could not be ignored. Before I knew it, a room was booked, I was hauling my pack up some stairs, and warm water was flowing in the shower. It was a good choice. It rained all day and there apparently was a Back to the Future marathon going on. Did I mention the karaoke? I’m pretty sure all of Stratton was there.
* I think I consumed 7,000 calories. 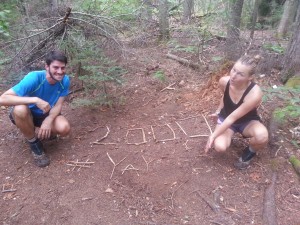 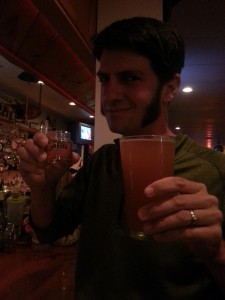 Some of Magnus’s Favorite Things 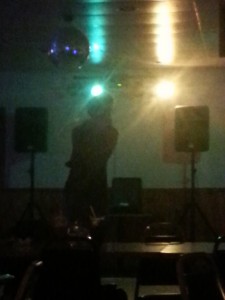 Big Easy Takes on Karaoke – On the Road Again

8/22 Saturday – Day 168
* Town morning, more food. I actually got to the point of feeling not hungry and not wanting to eat. It was a strange sensation.
* The next stretch of mountains, The Bigelows, are the last significant mountain climbs until Katahdin. They were beautiful areas with spectacular clear views of surrounding lakes and mountains. The last four miles of the day were surprisingly exhausting. The elevation profile did not seem to match what we had hiked. Nonetheless, it was gorgeous terrain filled with moose and huge boulders. We didn’t even make it to camp until almost 7pm. There were at least fifteen thru-hikers at the campsite not to mention the weekend hikers.
* Although I only stopped there for a break, Horn Pond Lean-to is one of the nicest, best maintained campsites I’ve seen on the trail. Each and every labeled site was raked and had a 5-gallon bucket for food storage. Also, the privies really had great views. 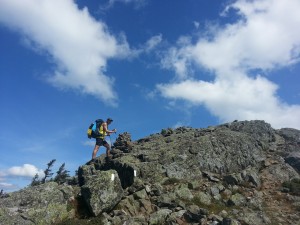 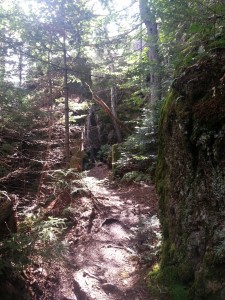 8/23 Sunday – Day 169
* Nothing turns out the way you expect it to. I had imagined the last stretch of my time on the Appalachian Trail to be primarily in reflective solitude. Not so. As hikers we’ve congregated in a large group and all seem to be committed to simply getting through it. We’ve all loved our time out here but feel like it’s time to wrap it up. We’re tired, hungry, dirty, and weary.
* Despite the relatively easy terrain and moderate temperatures, I was so exhausted. I began feeling like I did at the beginning of the trail when I would compare myself to other hikers who all seemed to be traveling at a pace much faster than mine.
* When hiking alongside others throughout the day, it often means you’ll be camping near each other, as well. In Maine, where the ground is peppered with rocks, roots, and other unsuitable sleeping surfaces, this means a competition for resources.
* Lots of loons at night, lots of frogs during the day, light rain. 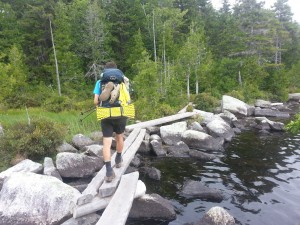 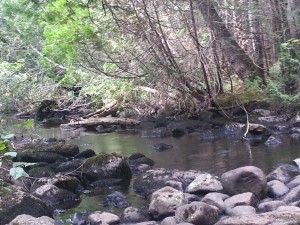 8/24 Monday – Day 170
* Even though we’re out here living in the woods, there are times that we still need to adhere to schedules and other people’s needs. The Kennebec River is unpredictable and dangerous despite its serene appearance, so a ferry (read: canoe) is provided to hikers wishing to cross. Fear not, there is a white blaze within the vessel. There is plenty of literature describing how and why the river ought to be respected by hikers of all kinds, so read up. (TL;DR – The water levels and current in the river fluctuate dramatically and rapidly and can easily drown you so take the free ferry, okay?)
* The ferry that is provided runs on a schedule that is fairly limited. Remember how there were so many hikers around? Well, only two hikers at a time can be ferried across the Kennebec and there were something like fifteen hikers who all planned on crossing. Magnus and I were packed and hiking by 6:35am to get to the ferry point in reasonable time. The AWOL elevation map showed a gentle descent all the way to the Kennebec River. Nice for an early morning hike, right? It was not true. I don’t know what was going on but it was little like that. No matter, we made it in decent time. Over the next hour more hikers joined us. Despite the warnings and trail gossip about recent rescues from the Kennebec, one hiker decided to ford the river because he didn’t feel like waiting the additional twenty minutes for the ferryman to arrive. There recently had been several rescues. This hiker was lucky, and I’m glad that he made it safely across, but — foolish move, man.
* Once the ferry arrived, every hiker completed a waiver to take the ferry. What’s an address? Do I have a surname? Of course I take personal responsibility for my actions. How else would I do it? Once the legalities were discussed and handled, we were permitted to cross! One ferryman, two hikers — the ferryman and one hiker paddle, one hiker relaxes. I got the job of relaxing and I think I did a pretty well.
* Many friends took a shuttle into town just across the river. This is one of the few times that I was able to resist the siren’s song of town.
* Magnus and I hiked on to the summit of Pleasant Pond Mountain. It was hard and very hot and everything felt like an impossibility. Pleasant wasn’t a word that was running through my head. The heat makes hiking much harder. Your body is working so hard already to hike, to carry all of your belongings, and then also to cool yourself down so you don’t completely overheat. But… I took this as a personal challenge. I insisted on using whatever reserves I still had to shred the last 3.2 miles of the day. I was practically running at times. I refused to stop. For possibly the first time on the trail, the whole day I was not passed, and I even passed two other hikers. So maybe it took waking up an hour earlier than usual and skipping a trip into town, but it still happened. Just as important, Magnus and I finally boiled enough water to make halfway decent mashed potatoes. A banner day.
* All of the large, mossy boulders throughout the trail on this day looked like manatees in a muddy ocean. 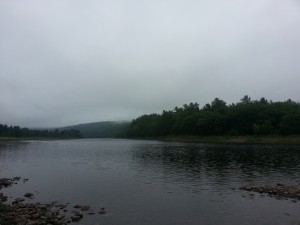 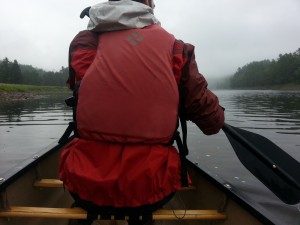 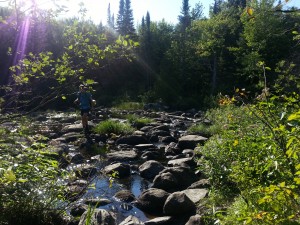 8/25 Tuesday – Day 171
* A morning climb over Moxie Bald, which was lovely. Also, the first true river fording of the adventure where there were no rocks to hop across. Magnus and I took off our boots to cross. How cute. The water was much warmer than I expected and a pleasant, invigorating experience. It was refreshing to wash off my feet and calves. For some reason, I get so very dirty on my legs. More dirty than other hikers it seems.
* The trail conditions changed very quickly to rocky, muddy, full of roots, and large, smooth, slick stones. Though the trail was more or less flat, it was extremely difficult to move quickly and the trail demanded that you focus on your feet and no more than 20 feet ahead of you at all times.
* Just beyond Horseshoe Canyon Lean-to, I heard a loud smack followed by a yell. I dropped my poles and ran back the way I came. One of Magnus’s poles got lodged between rocks on the trail then popped back to smack him full-force right across his eye socket. Yikes. The entire area surrounding his eye was swollen, but no true damage. Poor dude.
* The drizzle began then transitioned into full-on rain. Magnus and I got to another river crossing. This time, the water was up to my thighs. It was just as well because the rain was so strong there would have been no difference. The rain continued like that for an hour which also made the trail a very large puddle.
* Completely soaked and jumping through puddles, Magnus and I did what most thru-hikers toward the end of their journey would do — seek refuge in town. In this case, it was Monson, ME. We took the first road off the trail and stopped at the first place we saw, which was 100 Mile Wilderness Cabins. Rabbit and Gravity were already there. Guaranteed more hikers were in town. Within one hour, we were showered, in loaner clothes, and on the way to town for dinner.
* Yep, Monson was crawling with freshly scrubbed hikers seeking some comfort from the rain and the trail. I had a magnificent time running into friends and catching up over beer and warm food that wasn’t cooked with a pocket rocket.
* Massive thunderstorms lasted all night. Despite the rain, the cabin door stayed open and the loons were in full effect. Interesting thing about 100 Mile Wilderness Cabins — although the proprietor is a three-time AT thru-hiker and very involved in the trail, he more or less does not like thru-hikers and spent a lot of time talking about how disrespectful and bad we are. (“But not you guys. You’re the good ones.”) At times I felt a little like I was sleeping with the enemy, but… the cabin was quiet, dry, clean, and set apart. I swallowed my pride to sleep inside. 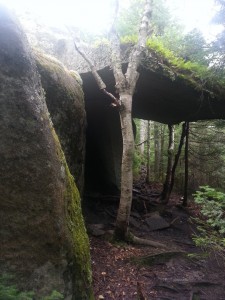 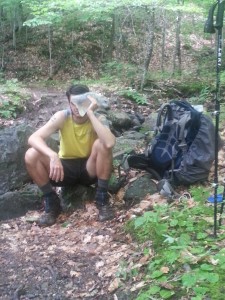 8/26 Wednesday – Day 172
* Zero day! Y’know, it rained like crazy all night and all day so whatever. The usual zero day activities ensued: resupply, locating internet access, eating as much food as possible, and sipping whiskey. This was the last time to ditch any additional weight since the trail time would only last for approximately one more week. Those items turned out to be any kind of extra first aid supplies, fingernail clippers, and rain skirts.
* Felt ready for the next day. I had no idea what was coming. 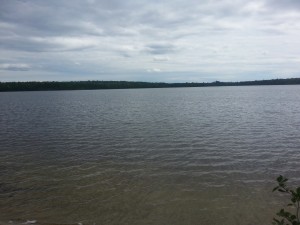