Coco and Magnus — Days 21 through 28 — The Smokies, Mountaintops, and Moonshine

I wrote a superb, top notch post of Magnus’s and my fourth week on the AT, but the internet ate it. I was very sad. I will attempt to write it again, but we will all know the original piece would have been far superior and meant for the ages. Let’s agree to that, shall we? Excellent. Moving on.

You may have noticed that the name “Earl” has been replaced by “Magnus.” This is not an error, nor have I forsaken my beloved. The trail names have arrived — The Countess Coco and Magnus Von Magnusson — so now that’s settled.

Here are some highlights from our fourth week on the Appalachian Trail:

3/28 Saturday — Day 21
* Snow! We took another zero day to avoid some bad weather in the Smokies and instead enjoyed the snow from our warm hotel room. 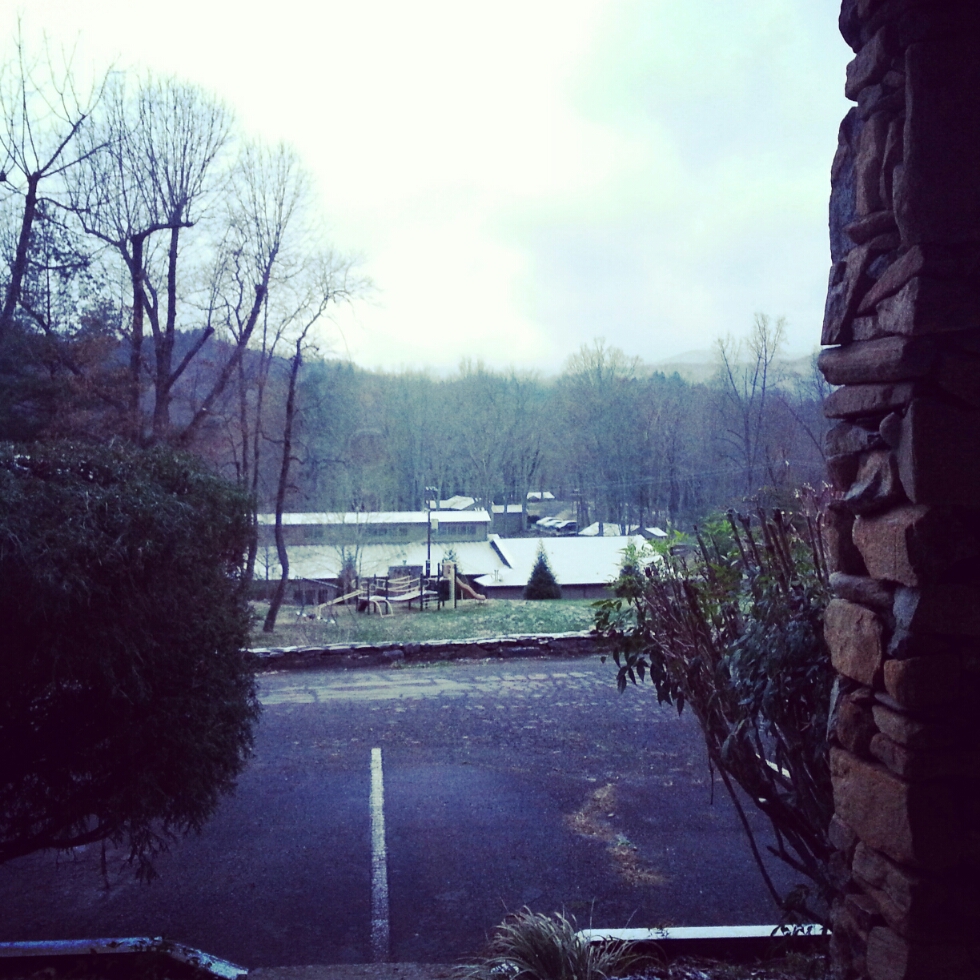 * Second Star, So.Crates, Magnus, and I enjoyed a round of beers on the house from the Fontana Village restaurant’s hostess. Thanks, hostess! We know you were having a difficult night. I hope your tips far exceeded your expectations with that huge crowd.
* A guy who owns a Corvette had a red dragon puppet that spoke in a Russian accent. Truth.

3/29 Sunday — Day 22
* We entered the Great Smoky Mountains National Park. (Yes, we registered and submitted the form at the southern end of the park.)
* Snow! Much had melted and it was manageable. 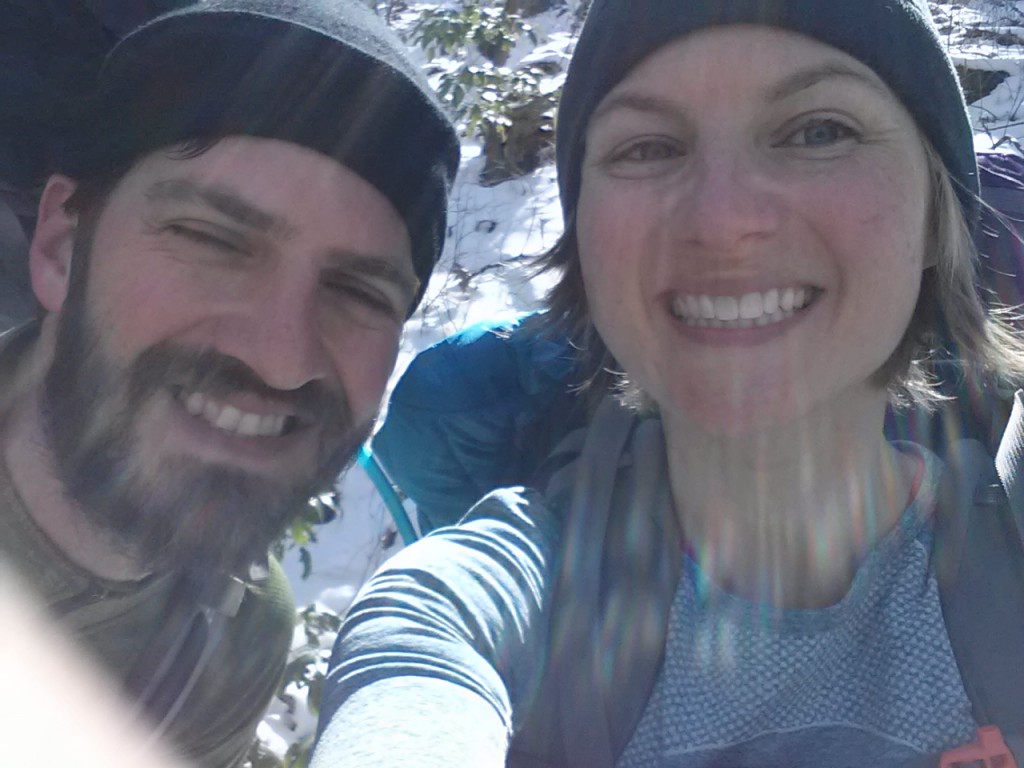 * We saw a tree that had been torn up by a bear.
* Reunited with our dear friend, Luna! 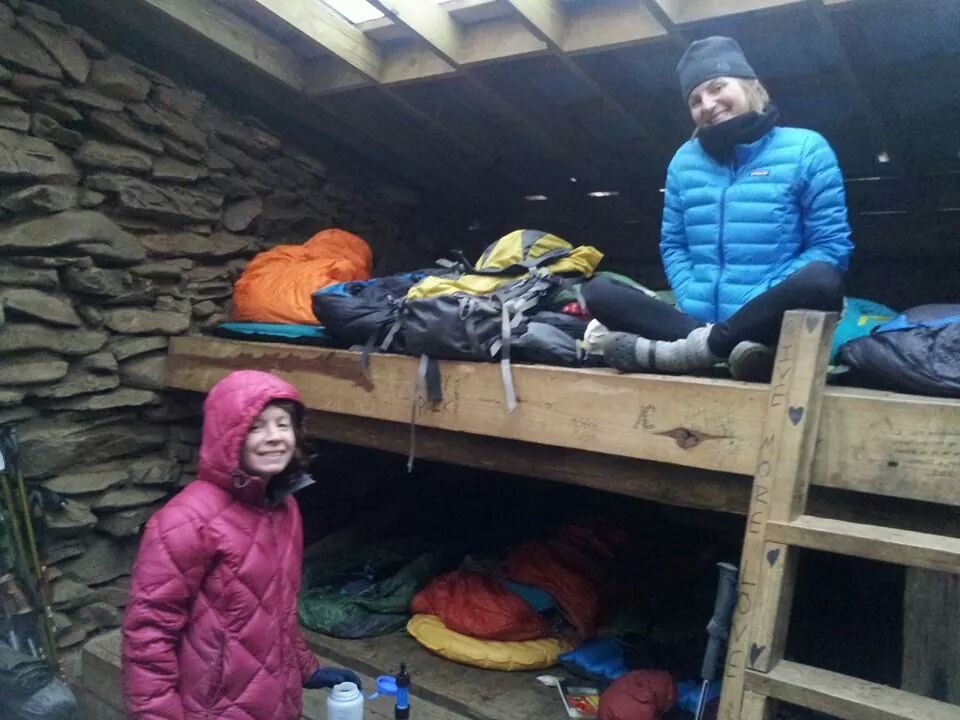 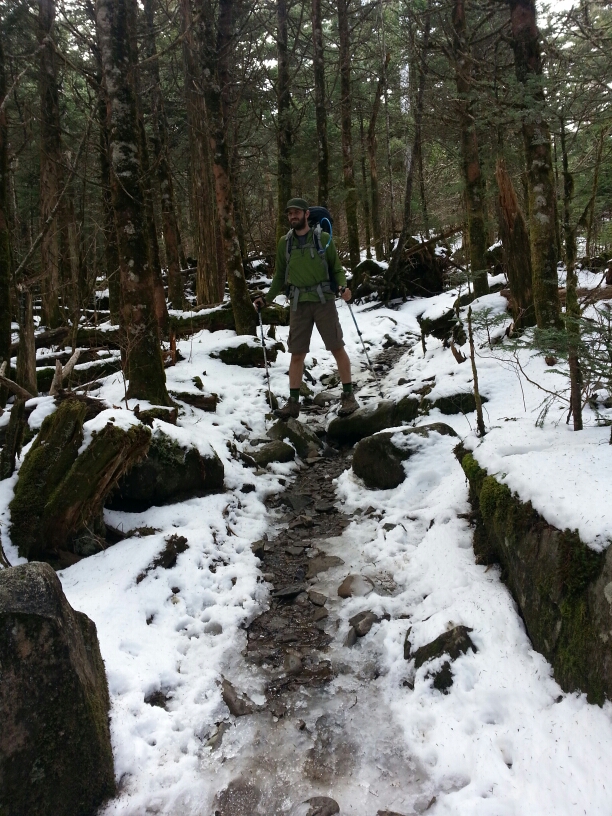 * At one point, we were hiking downhill and I fell three times. First time: haha! Second time: BAAAHAHAHAA! Third time: KNOCK IT OFF. 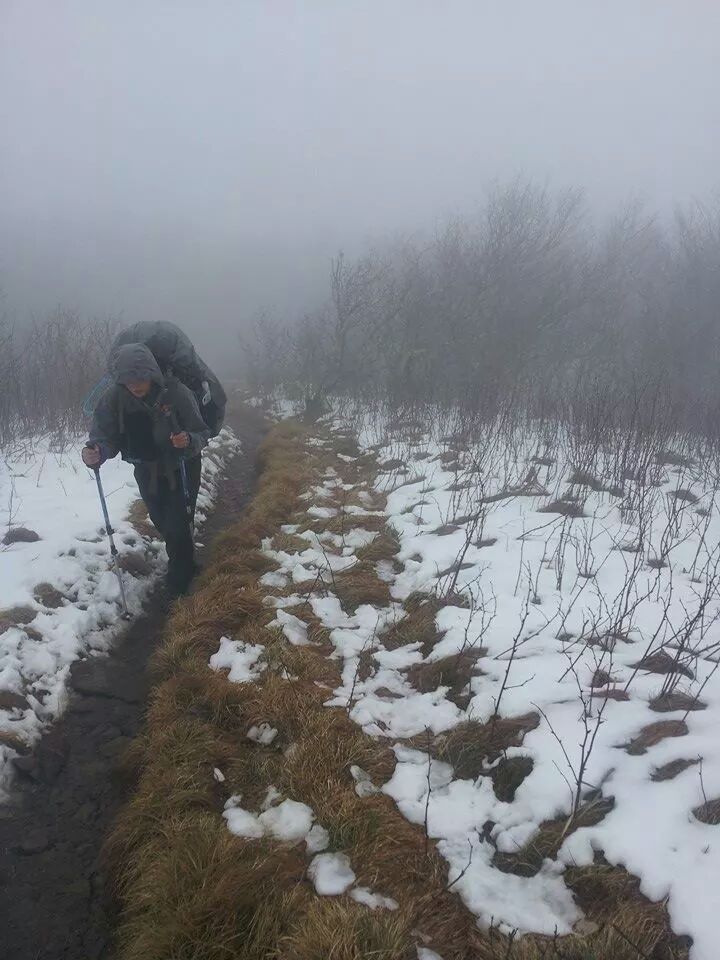 * Mad Hatter dubbed us “deer on ice” every time we were confronted with another icy patch. I think that’s appropriate.

* We saw bear tracks in the snow! 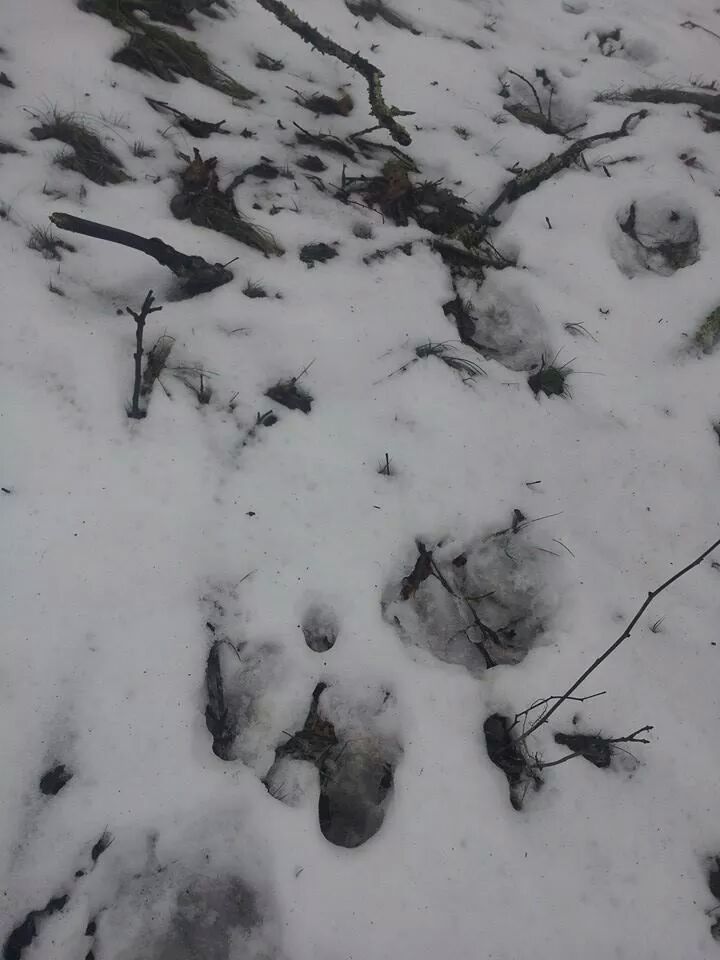 * The afternoon of this day has been one of my favorites so far. We arrived at our campsite fairly early. The rest of the afternoon was spent practicing yoga on a stretch of dry grass and hanging out in the sun with other hikers. Despite the sun and perceived warmth, we could still see our breath. 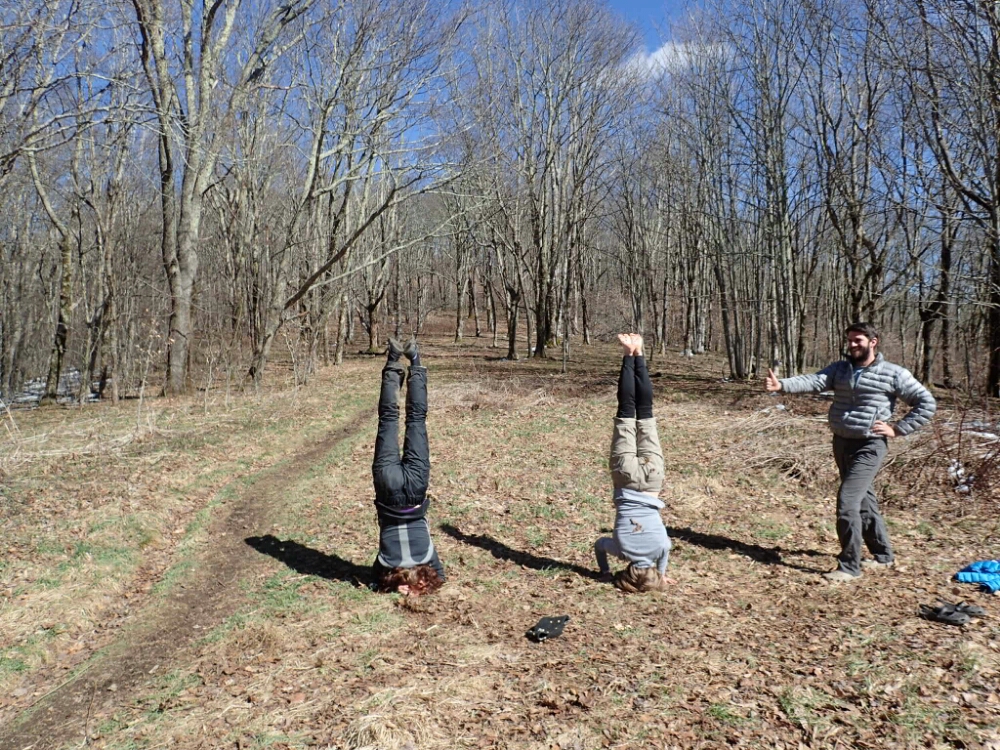 * Some section hikers gave us snacks — thanks, guys! 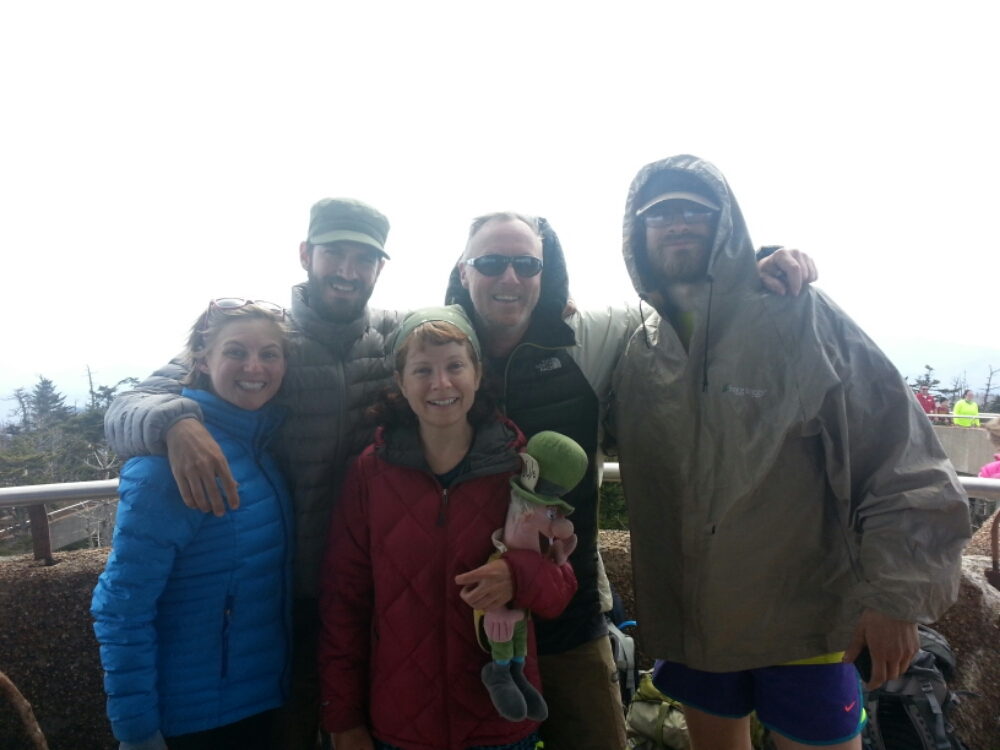 * Mt. Buckley, the mountain directly south of Clingmans Dome on the AT provided just as beautiful and expansive views, if not more, than Clingmans. 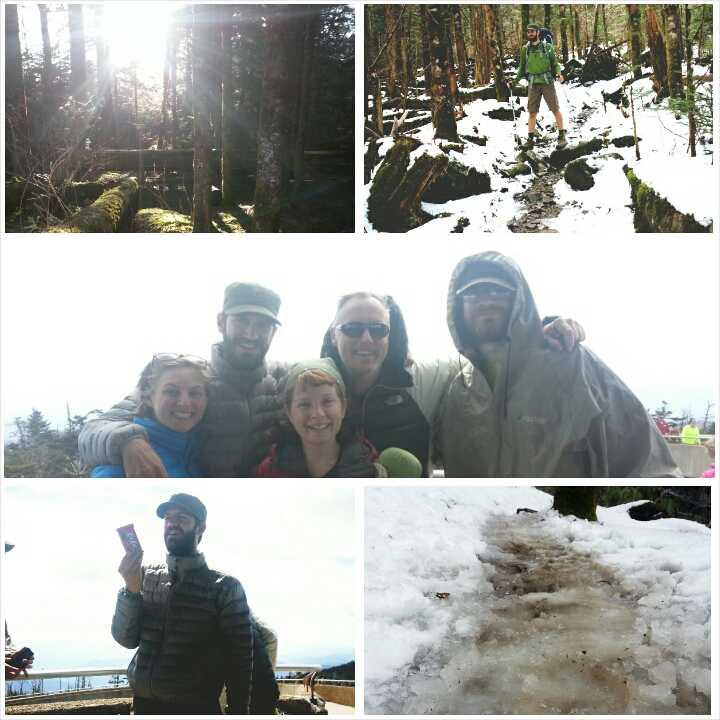 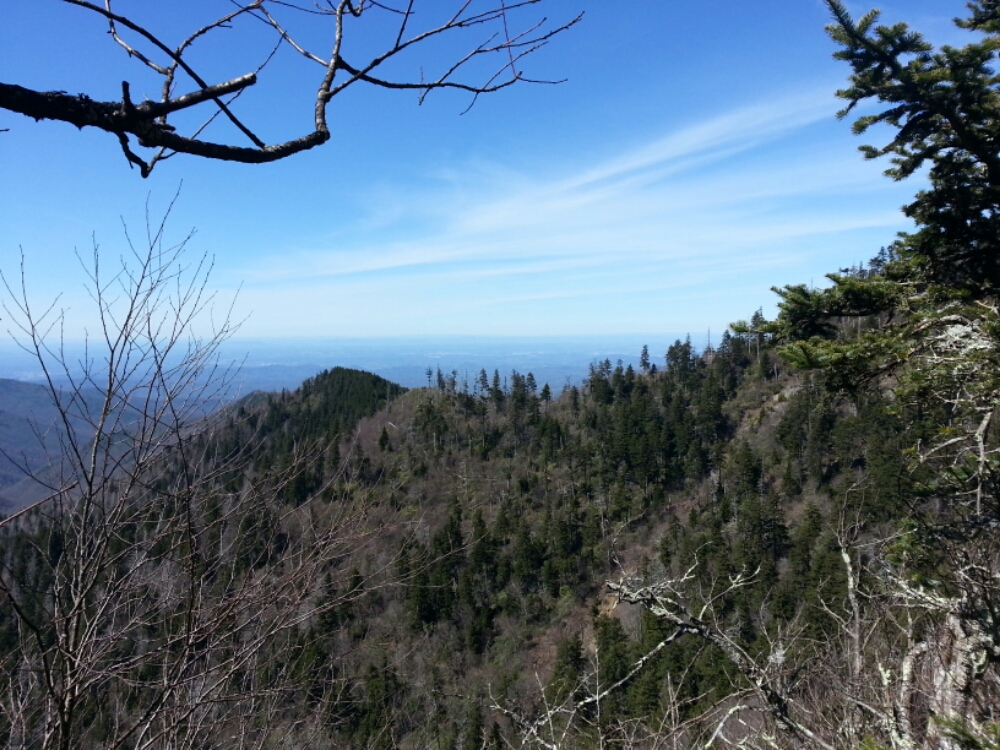 * At Newfound Gap, we met and received Trail Magic from the inimitable Beth & Bernie of Beth & Bernie’s Honeybun Cafe (they’re on FB). Magnus felt a great kinship with these fellow fools as we were all celebrating our anniversaries. Happy 31st to B&B! For the past several years, they have celebrated their anniversary by providing trail magic to thru-hikers at Newfound Gap. They were so very generous and were there at the moment my hiker hunger struck. I consumed: a hummus, guacamole, Swiss cheese, lettuce, tomato, mayo, and mustard sandwich; a can of Coke; a bag of Cheetos; a handful of Skittles; a handful of dried cherries; and a chocolate glazed doughnut. I could have eaten more but wanted to be sure other hikers might have a chance to eat, too. They also provided us with some resupply items that truly helped us through our next resupply point. 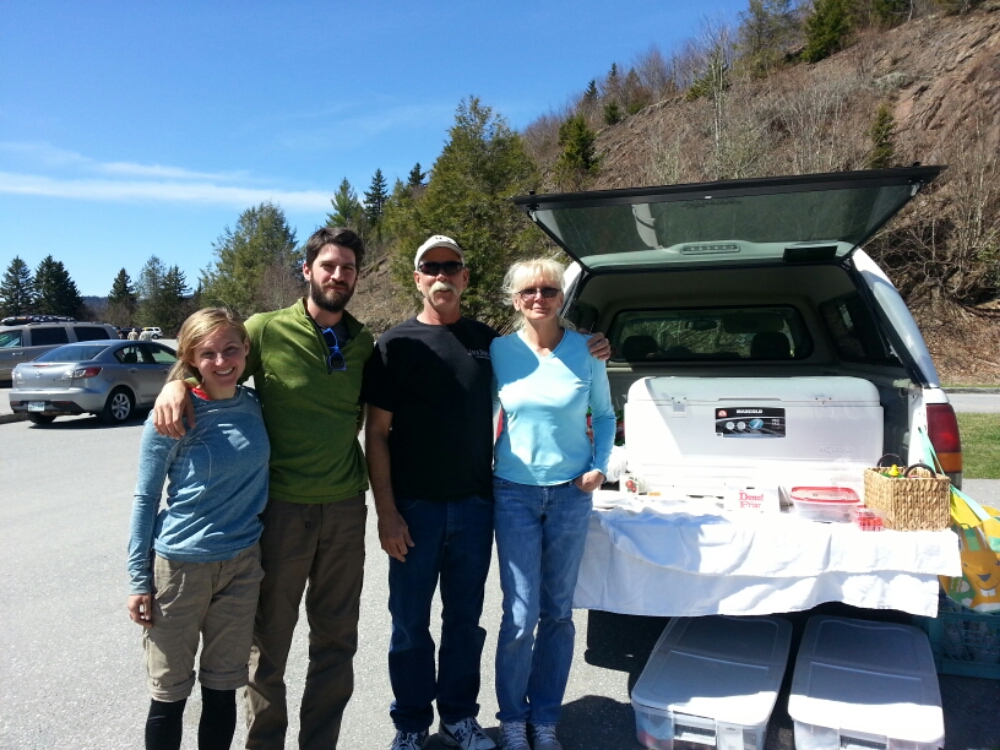 * Once at our shelter for the evening, our trail family gathered some items for quite the anniversary celebration collection: two Starbursts from Luna; a small peanut butter packet from Mad Hatter; and two Kool-Aid packets from Slingshot. The crowning jewel of this culinary jewelpiece, however, came from Copperhead and was an airplane-size Whipped Cream flavored vodka. We all toasted and passed the tiny bottle around. Thank you, friends! Our most unique anniversary to date. 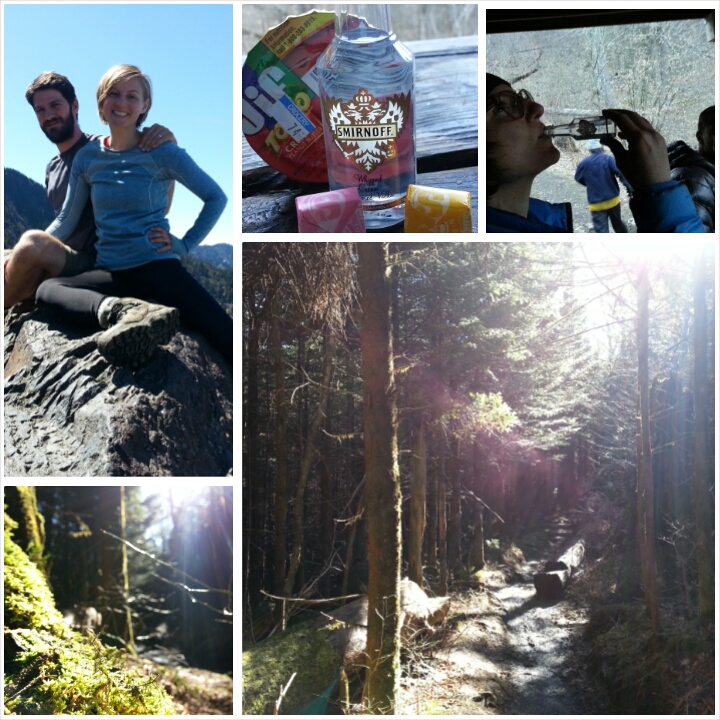 4/2 Thursday – Day 26
* We expected rain, but it felt like the mountains were teasing us by periodically spitting on us instead. What started as a misty and cold morning unraveled into a calm and clear afternoon. 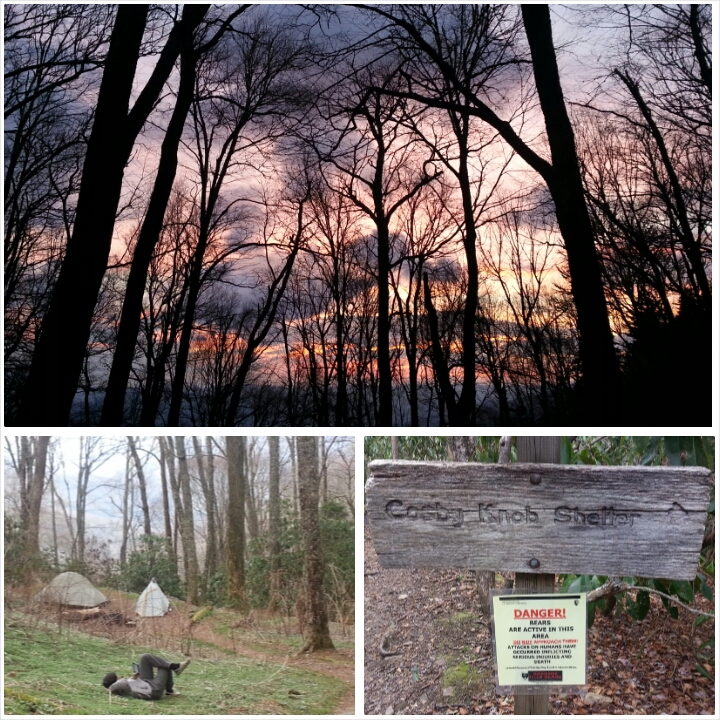 * Stayed at Cosby Knob Shelter which offered both a beautiful sunset and sunrise the next morning.

4/3 Friday – Day 27
* We completed hiking through the Smokies!
* Directly upon leaving GSMNP, we saw Adam and Dana (Dana is also an Appalachian Trials blogger). They have decided to not complete their thru-hike as planned but will be still traveling the trail. It was so great to see them and catch up. They even treated us and other hikers to more magic. Thanks, friends! 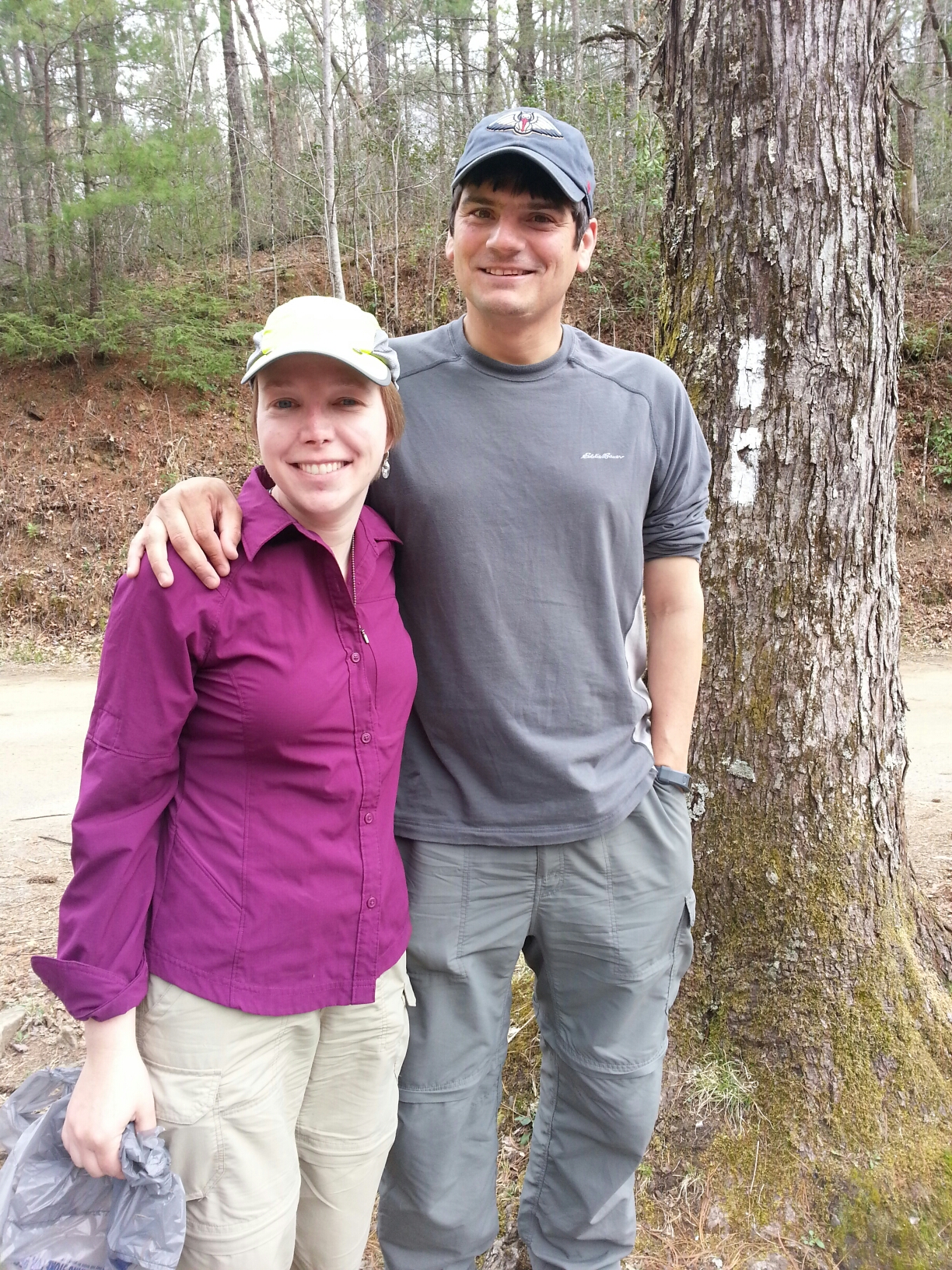 * We stayed the night at Standing Bear Hostel. Lumpy and Rocket were very helpful and our cabin was placed directly over a stream. Beer was available, so the four of our group drank 16 of them. It kept feeling like everything was half-off, though. The shower was phenomenal and had the AT symbol in bottles in the wall, but the privy had a glass window in such a way that the next person in line would have to look in to determine just how occupied the privy was. There was a washtub for laundry, but the dryer left the clothes smelling almost worse than when they went in. Considering our clothes hadn’t been washed for six days, that’s fairly impressive. The resupply was decent, but half the food we purchased and consumed was expired. Imagine if a hostel was run by Peter Pan’s Lost Boys and they also drank moonshine. That’s Standing Bear Hostel. This brings me to my next highlight…
* Moonshine or “shine” (or “shawn” as it was formally presented to me) was offered, so naturally I accepted. How did I drink it? Out of a shot glass shaped like a gun, of course. This moonshine has a legacy as it was made by an individual who was taught directly by Popcorn Sutton. Still haven’t gone blind, so I’m marking this as a success. 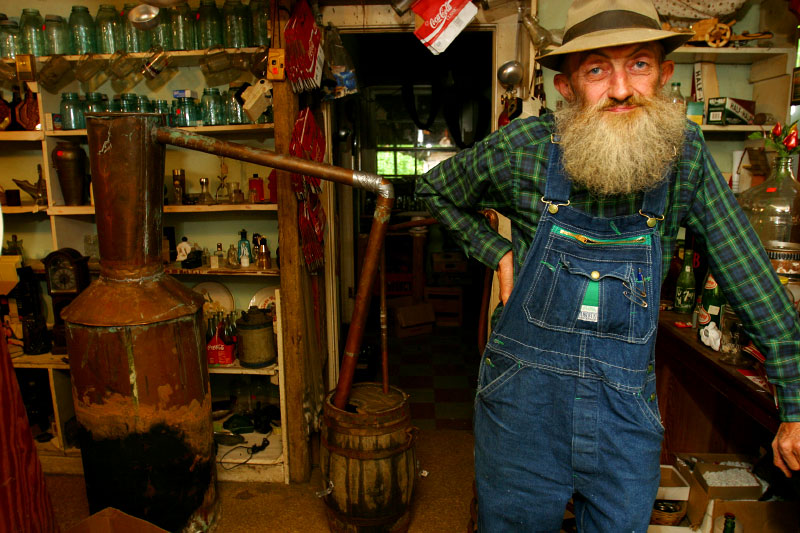 4/3 Saturday — Day 28
* We had breakfast like civilized people — eggs, fruit salad, and we sat in chairs. This is worth noting. 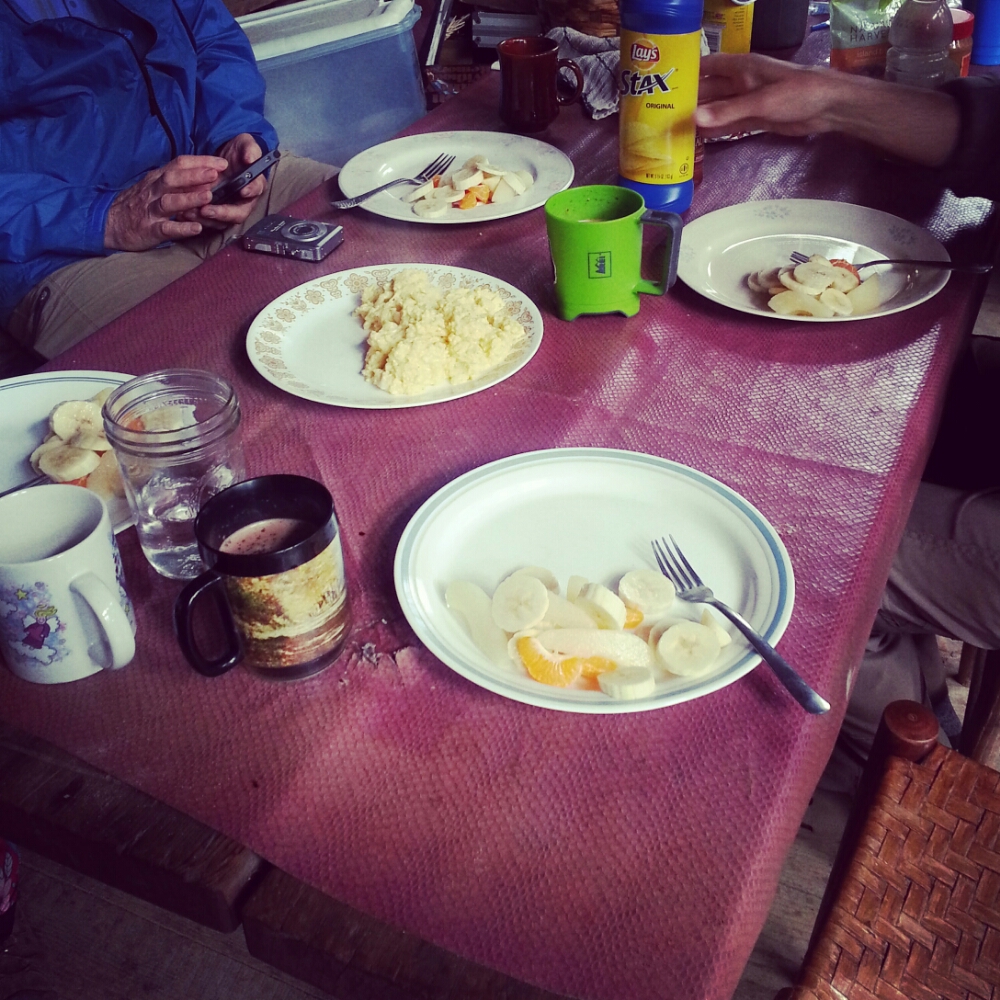 * I carried two beers to our next campsite. That may not seem like a big deal until you’re carrying all of your belongings and home on your back. An additional 24 oz. is a considerable load. I am a dedicated woman, though. I bought those PBR’s and, dammit, my friends and I were going to enjoy them. And so we did after they were chilled in the crystal clear, cold steam right next to our tent. I felt like a champ. 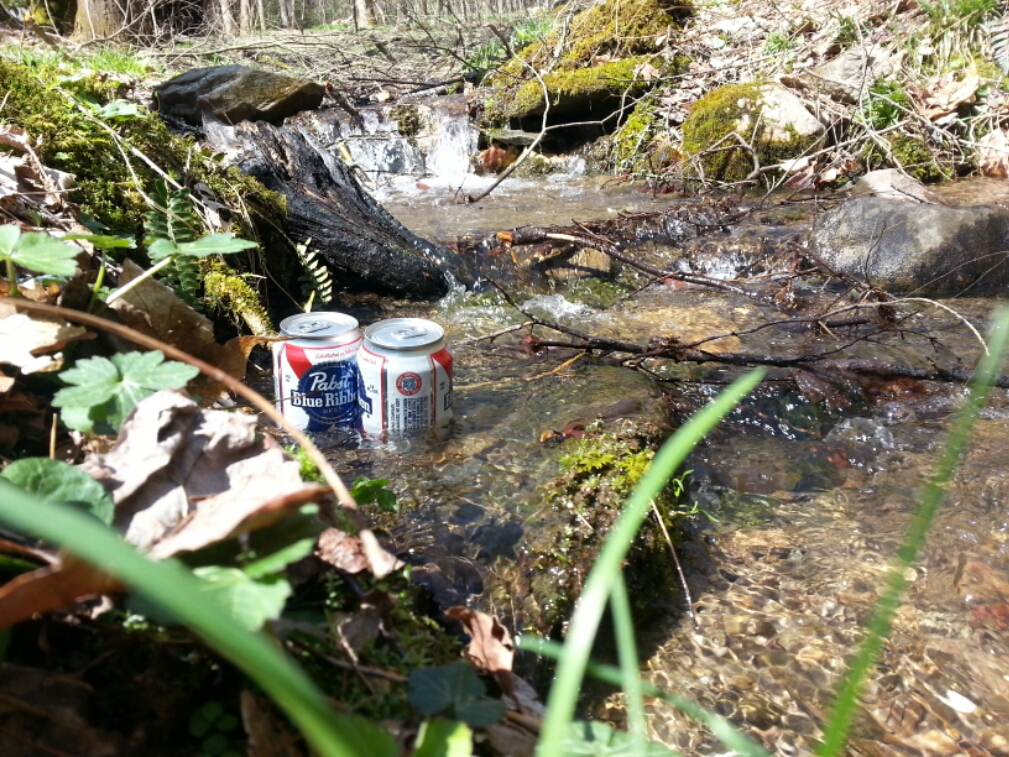 * The privy at Groundhog Creek Shelter should be given two awards. One award would be for it’s lock. A beautiful piece of woodwork craftsmanship that should be hailed for the ages. The other award should be for Most Awkward Poo Experience. This privy is located approximately 150 feet from the shelter and the structure you are shielded with is approximately 3’x3′. These dimensions and location mean that when you are seated you only have privacy up to your chest. Think about this for just a moment. I certainly did. But there was no way out. Though slightly vexed by the situation, I realized — hey, that’s okay, we’re all in this together, whatever, just try not to make eye contact, it’s cool. And at that moment, a group of Boy Scouts waltzed in, single file. I shit you not. Err, I mean…y’know. Eye contact. No privacy. 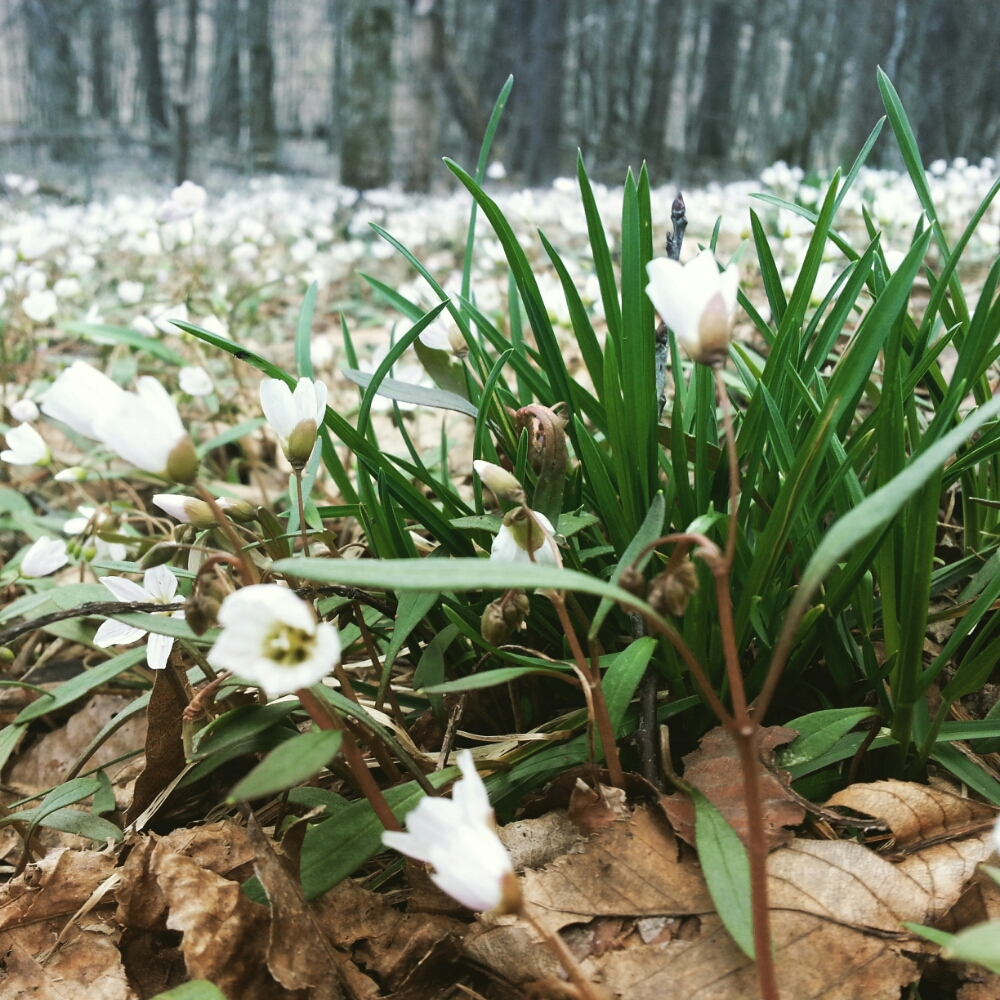