Coco and Magnus — Days 90 through 106 — Rocks, a Rattlesnake, and Fear Mongering

Another 267.1 miles have passed and we have almost completed hiking through Pennsylvania. Less than half a mile to go!

To begin, some random thoughts:
* We rarely see stars at night.The sky is almost always cloudy at night. Since Day 1 of this adventure, Magnus has been carrying a star map and has not yet had an opportunity to use it.
* People love to tell you what to do and how to do it.
* More often than should ever happen, human poop is found on the trail. It’s horrific. Here I will exemplify the point above — dig a cathole! If you are so lazy to dig a cathole, don’t go hiking! And while I’m telling you what to do, bury your toilet paper! Quite literally, no one wants to see that shit.
* Every morning for the past month our tent is covered with anywhere between three and a dozen spiders. Many different kinds. We have named our tent Spider Queen.
* You might think that sleeping during a thunderstorm in a wee tent would cause a loss of sleep. In actuality, we sleep most soundly during these times and have difficulty sleeping indoors.
* Virginia is not flat. Virginia privies are the gold standard.
* Pennsylvania hurts.
* Birds sing non-stop. Whip-poor-wills, wood thrushes, and finches are common, as are barred owls who we call Party Owls because they always get rowdy right around the time you want to go to sleep. The Eastern Wood-Pewee is another favorite. When it calls, it sounds like, “Hey guys…?! Hey guys…?! Awwww… ” Poor lil’ Pewee. Makes me laugh every time. 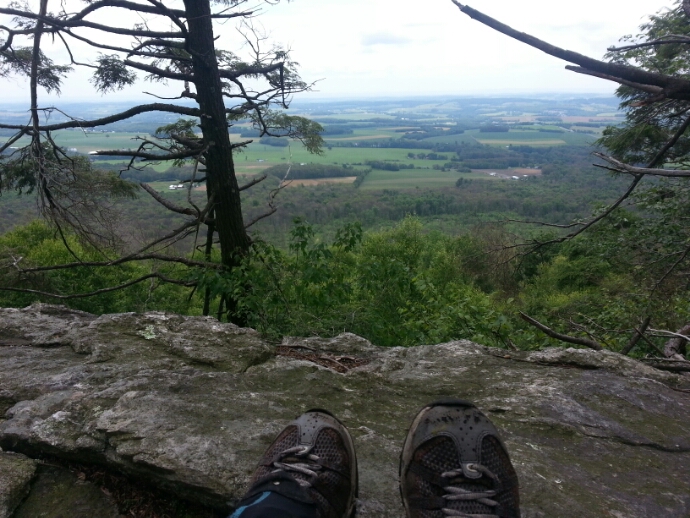 Many of our friends have made the decision to leave the trail. Some started the trail with the expectation of stopping prior to Katahdin and others made a change in plans. I am proud of all of them for their outstanding accomplishments and growth. Hiking over a thousand miles (or even one hundred!) is something most people only dream of doing. If you haven’t done this and you think it’s hard, you don’t know the half of it. Wet shoes with blisters for days, wet sleeping conditions, dripping sweat off your face, dirty clothes and body for a full week giving you a stench you never would have believed your body could create, near-constant hunger, mountains to climb whether you’re ready for them or not, rocks, tripping over roots, giving away loved belongings because they weigh a few ounces and that’s just too much, numb toes, frozen fingers, broken gear, pooping in a cathole in the rain, pain in muscles you didn’t know you had, gnats dive bombing your eyeballs and sometimes succeeding, legitimate fear of being struck by lightning, regular encounters with wild animals and disease-carrying insects, boredom, and so on. This is life on the trail.

There are of course outstanding and beautiful experiences, also. All my friends who have ended their journey and those still on it know these well. We’re a part of an elite group of athletes regardless of our weight, strength, or physique. We know the thrill of carrying ourselves and our homes over mountains. We make friends based on common experiences and situations — friendships that might not have surfaced and sustained in the other world. We persevere. We look into the sky to make decisions based on what we see and feel. We allow our minds to wander. We roll with the punches. We get really excited about fresh fruit. We hug each other even when that ungodly stench reaches unsurpassed levels. We find luxury in small things. All of these things arise even in the presence of the daily struggles we encounter. Outstanding and beautiful. All of my friends who have attempted the trail are my heroes and they inspire me.

6/5 Friday — Day 90
* We had breakfast with a few bikers from New Jersey and the motel’s manager. A wonderful place. By the way, the manager Abi loves coffee and philosophical conversations. We got along famously.
* This day, we met Team Aussie Legs. A mother and two daughters from Perth. These women are amazing! We hiked and/or camped with them for the entirety of this post. Met on Day 90, separated on Day 106. (aussielegs.WordPress.com)

6/6 Saturday — Day 91
* Six consecutive days of rain or something like that. Who’s counting?
* Maryland! Met several hikers attempting the Maryland Challenge (all 41 miles in one day) and the Four State Challenge ( hitting four states — VA, WV, MD, and PA — about 47 miles, in one day). In the words of Amy Poehler, “good for them, not for me.”
* The original Washington Monument!

6/7 Sunday — Day 92
* We crossed the Mason-Dixon Line! Officially in the north and in our seventh state. I frequently repeat to Magnus and myself the states we’ve hiked through — Georgia, North Carolina, Tennessee, Virginia, West Virginia, Maryland, and entering Pennsylvania. A helpful mantra.
* With much self-control, Magnus and I resisted the temptation of going into town with Moon Unit, Comrade, Switchback, Pokey, and Bandit (collectively Team Seal Team 6). That’s okay. We had tiny bottles of whiskey! We were also graced with the presence of our beloved friend Obi-Wan! Hugs, chats, and a shot or two of whiskey.
* Future hikers: the Rocky Mountain Shelter area has no good camping spots. It’s not worth it. Camp about 100 feet south of the blue blaze to the shelter.