The gear I used on my thru-hike attempt last year worked WONDERFULLY (you can see pretty much what I took with me here, give or take a few things). My pack was amazing and my hammock was literally the most comfortable thing I’ve ever slept in, but alas I have made a few modifications and will be starting my hike this year with a slightly different setup. I wanted to take a few moments and discuss some of the bigger, more important pieces of gear I’ll be taking, and share my lighterpack which has more details. Since I’ve spent a solid 150 nights or more in the woods in the last 12 months, including 6 months working in wilderness therapy where I learned more than I ever imagined one could know, I feel like I have my system mostly nailed down, though there is still some room for improvement. So, here it goes.

I slept in a Warbonnet Blackbird double layer 1.1. This hasn’t changed since last year, and this thing is basically the equivalent of sleeping in a cloud. I sleep better in my hammock than I do in most beds. I can’t compare to similar/equivalent products by different brands, but I can say with confidence that I would buy another WBBB in a heartbeat if it came to it. I have not ever once regretted the decision to switch to hammock camping, and have not yet found a single flaw in the design of this beautiful piece of equipment. 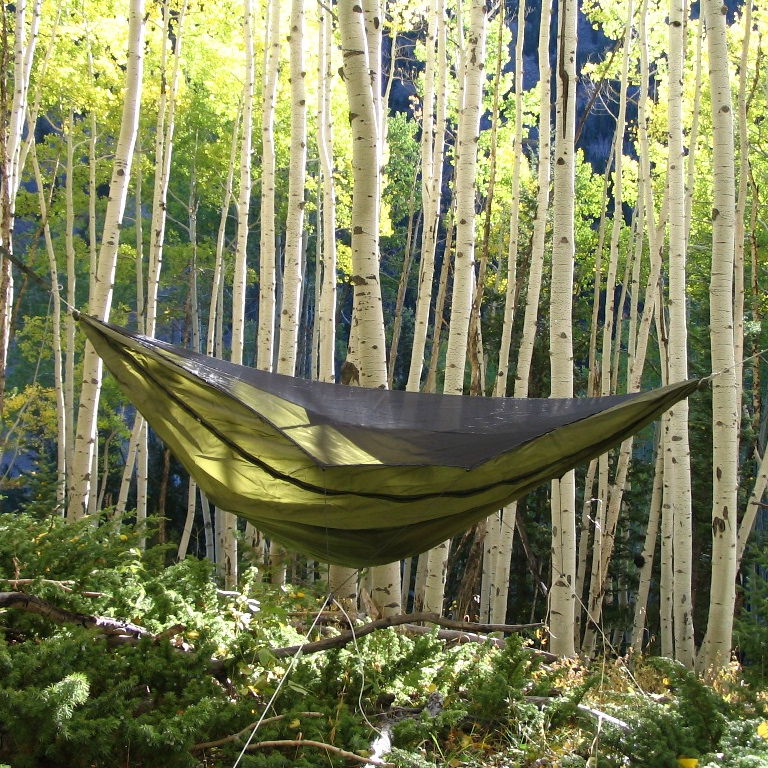 If you buy a tent, it’s usually an all-in-one system (the tent and rain fly), so it’s considered one piece of gear. Well, my hammock has an integrated bugnet, but I still needed a tarp. I’m not going to lie, when I received my Warbonnet Edge tarp in the mail, I was absolutely positively sure this tiny thing would NEVER keep me dry in a downpour. To this day sometimes I set it up and have my doubts. However, I’ve slept through a few too many serious thunderstorms to have any real concerns anymore. I have not ever once gotten wet overnight using this tarp. It’s some sort of crazy magic trick or maybe just remarkably precise worksmanship, but it’s amazing. The one flaw this tarp has is it’s lack of privacy: you better not be shy if you’re at a crowded shelter or campsite and need to change clothes or something of the like. It doesn’t offer much in the form of visibility protection, but the weight and space saved by the design is pretty much worth it. 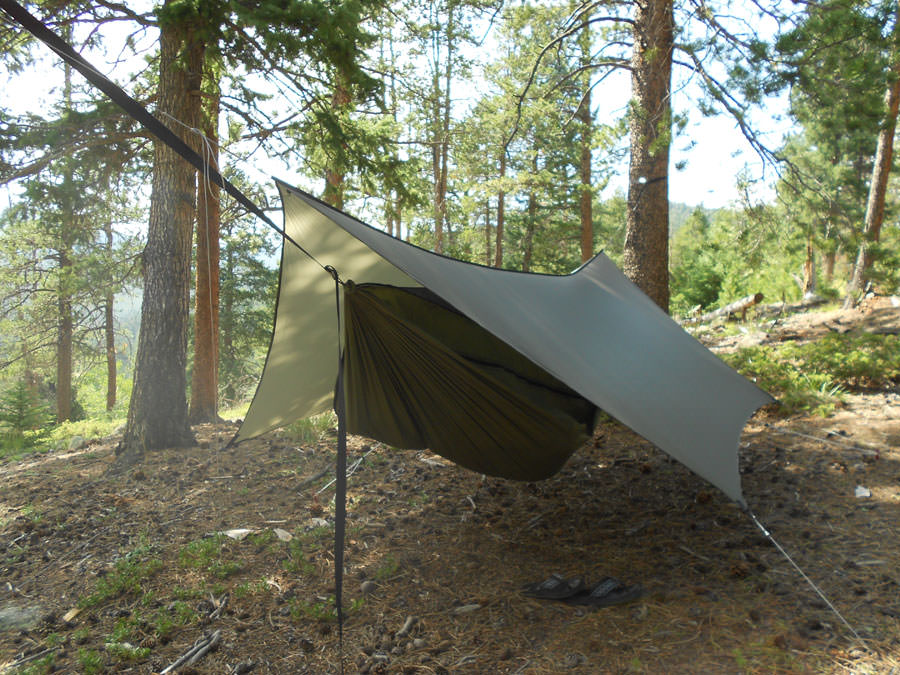 This setup has kept me comfy and dry on countless occasions, and I have faith that it will keep me happy on my thru-hike attempt this year.

Last year during my thru-hike attempt, I started with an Arrowhead Equipment synthetic 3/4 length underquilt and an REI Joule sleeping bag. I’m going to comment on both pieces of equipment here without dissing either, as they are both solid investments if they are right for you.

The sleeping bag performed phenomenally. I distinctly remember below freezing nights in the Smokies last year where I slept with my bag unzipped and was still too hot. However, I also slept with the bag unzipped because it was super super narrow and I felt like I was in a straight-jacket when I zipped it up. I ended up returning the bag to REI when I got home and purchasing a Big Agnes bag instead, which also didn’t work out. This was also a great bag, though I didn’t feel like it lived up to its temperature rating. It was one of those backless bags that has a slot for your sleeping pad, and since I was in a hammock and didn’t use a pad, I found I had a hard time keeping the insulation on top and the open part on bottom. It also didn’t work for me.

The Arrowhead underquilt, well I’m sure it’s the right piece of gear for someone but it did not work for me. I think it was the 3/4 length thing that made the difference, but I froze to death with this UQ. I swapped it out before I hit the 300 mile mark.

On to what I’m actually taking with me this year:

I purchased a Hammock Gear Incubator 20 last year at Trail Days and haven’t looked back since. This thing, while rated to 20 degrees, has kept me toasty in about 17 degrees with 35mph+ winds and snow flurries. I cannot say enough good things about this company and the quilts they make. I trust that I won’t be cold from the bottom using this quilt and it hasn’t let me down yet. 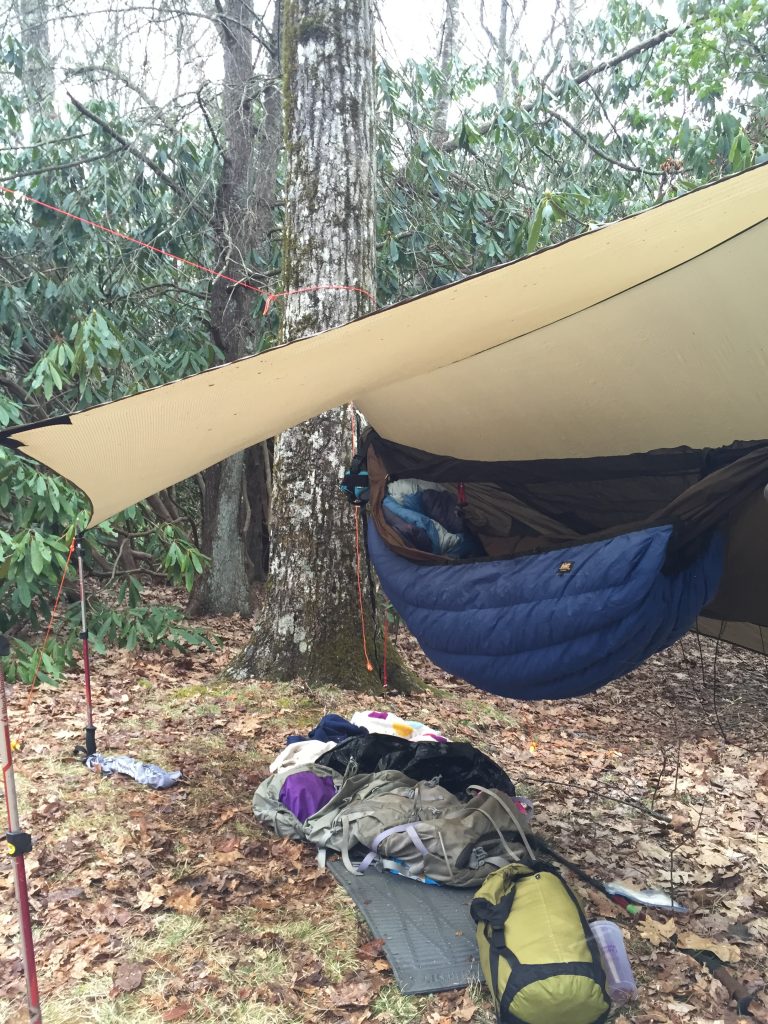 Since I have been so thrilled with my HG underquilt, I really really really wanted a HG topquilt (the Burrow 20). I had planned to buy one at Trail Days this year, but alas, HG didn’t show up. Since I’d already sold my sleeping bag back to REI due to being unhappy with it’s performance, and HG apparently had something like a 6 week backup on orders, I had to just go ahead and buy something. I ended up purchasing a Jacks R Better topquilt at a nice discount at Trail Days, but it’s several ounces heavier than the HG quilt I wanted. I hope I’m happy with this quilt, but if not, maybe I’ll try to swap it out for a HG in the future (HEYYYY Hammock Gear: if you wanna send me a burrow, feel free! Ha!) So I’m starting with a 25 degree Jacks R Better Hudson River. I hope I love it.

Here’s where I’m torn a bit. I have my old Osprey Aura 50L that I loved during my attempt last year. It worked flawlessly and I was never uncomfortable. However, it has a significant amount of wear on it and I’m worried about it being able to make it all the way. Then I have a 65L Aura AG that fits like a DREAM (seriously, the suspension on these AG packs is unreal). But it’s really bigger (and heavier) than what I want to carry. I’m having a hard time making the decision, but it will be one or the other and I’ll have to decide pretty quickly.

Standing on a rock in the Roan Highlands, Osprey Aura 50 on my back.

Sporting my Aura AG 65L on a recent section hike.

So those are my big 3 (5). You can see my full gear list by following the link to my lighterpack list (above). Just a few more notations on why I chose the things I did:

So there it is. What I’m taking, what worked and what didn’t. What I hope will work this time around. I’ll update if anything changes, and feel free to ask any questions you may have. I’m no expert, but do have a fair amount of experience with what I’ve used and am happy to give my thoughts.’

Disclosure: I was NOT paid for any of these reviews and I did NOT receive any of this gear for free or donated (but I won’t turn down any donations, hint hint!). These are just my honest opinions and experiences with gear I purchased and used.