Rob Bird, a well-known Tennessee- and Massachusetts-based AT trail angel, passed away in his home on Monday, February 28th after a short battle with brain cancer. He is survived by his two children and two grandchildren, as well as a sister and close friends, according to his obituary. For the past 21 years, he had dedicated his life to serving the trail community. He had been diagnosed with terminal brain cancer, which was announced on Facebook on February 19th.

For those looking for a space to gather and commemorate Bird, the Birdcage South in Tennessee will be open beginning March 11th until sometime in April. More information here. 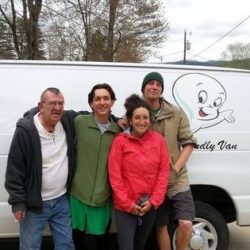 Rob Bird with some hikers in front of “Casper.” Photo via Briana DeSanctis.

Rob Bird and the AT Community

Bird has been a beloved staple of the AT community for over two decades. His white van, “Casper, The Friendly AT Van,” was a sign to hikers from Tennessee to Massachusetts of cold drinks, candy, and good conversation to come. He would also carry hikers’ packs while they slackpacked for days, until they reached his home where they could shower and rest.

According to this profile, Bird began helping hikers when he was managing a Shell station in Dalton, Massachusetts. Hikers would pick up their resupply boxes from the post office next door. Bird offered hikers the use of the work bay to rearrange and sort through their things. One day, he invited a hiker to stay with him to shelter from the rain. This hiker spread the word about Bird’s generosity, and Bird began hosting hundreds of hikers every year. He moved to Tennessee in 2012 and bought Casper in 2013. He did trail magic and hosted hikers at the “Birdcage” in both Tennessee and Massachusetts.

Bird’s magic is well-documented. He is even the subject of an award-winning 2019 documentary, which showcases his generosity and the affection many in the trail community had for him. “I don’t see it as a service, I see it as being part of the community,” he said of helping hikers.

Bird encouraged hikers to “pay it forward” and help others as he had helped them. He gave big hugs, or “Vitamin H.” His death has rattled the hiker community, and many are leaving memories and condolences on his Facebook page.

“He knew what hikers needed. It wasn’t his Dollar General sodas and sweets, his patio couch, his cargo van, or his Casper trademark, though these were all great icebreakers. It was love. And man, did Rob have some of that shit to pass around,” said a hiker in a Facebook post.

“It’s not everyday (sic) that you get to meet someone so genuine and so caring, that wants nothing more out of life than to help a stranger and bring a smile to their face,” said another.

“We’ll all need to be kinder, more giving and just a little better to fill the void this man leaves behind,” are fitting words by another hiker to commemorate a man remembered so fondly for his compassion and generosity.

May all of us who have experienced unconditional kindness pay it forward. For Rob.

Featured image from the documentary One Wing in the Fire by Maximilian Armstrong.