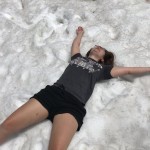 Condoms: The Solution to Sexual and Survival Safety on Trail

A couple of weeks ago my mom was telling me about someone she heard of who met a guy on the PCT and they ended up hooking up and dating for the next couple months after the trail. I remember having the reaction of, “Yeah, that’s probably not uncommon, because people often get deep with others they hike with pretty quickly.” It made sense to me, but I hadn’t really thought much of it before. As she was talking about how they ended up breaking up, I’m thinking of all the couples that have probably lasted a while after a trail, and how interesting a story that would be if the relationship lasted. My mom and I kept talking for a while, and then my mom asked, “What about protection? What if you didn’t bring condoms with you?”

As a backpacker, I laughed, saying, “That’s just added weight, no one would carry that.” But as someone in the public health field, the discussion with her really got me thinking about sexual safety on the trail. Everyone’s worried about Giardia, norovirus, and Lyme disease on trail (which are all important to be cautious of), but maybe they should also be worried about chlamydia, gonorrhea, and other common sexually transmitted infections (STIs). Of course, this only matters if you have sex on trail. I’m sure that many people reading this will say, “I’m going to be too busy to do that.” I get it, and maybe that’s true. There are many single hikers who stay single and never hook up with anyone. But it’s ignorant to say that no one does. Especially for younger hikers. I really don’t think that the hookup culture that’s been ingrained in their brain is going to go away right after college or just because they’re hiking on a trail. Even if you’re on birth control, there’s still a risk of contracting an STI. Condoms are the only method that prevent both pregnancy and transmission of STIs.

We don’t have data to say how many STIs are transmitted on trails or how many people have sex on trails. But we do know that 50% of people will contract an STI before the age of 25 in the United States. We also know that 85 out of 100 women will become pregnant within a year of having unprotected sex consistently. Just those two statistics have been enough to make me carry condoms with me since I started college, but I know that’s not the case for many people.

As I continued this conversation with my mom, I said something along the lines of, “I’m not sure there’s a way to get hikers to carry condoms more frequently, though.” She suggested that there are many survival reasons to carry a condom, even if many hikers can’t see the purpose of carrying one for sexual purposes (yet). So if you’re still suspicious about why you should carry one (or multiple), here’s some alternative uses that might convince you:

Things happen, and if you need a way to carry more water or your water bottle broke, you could use a condom. I know, not ideal, but it’ll get the job done. Just make sure to not puncture the condom while doing this.

Protect Your Gear from Moisture

Yes, condoms can stretch enough to do this. Especially with small items like socks, condoms can easily fit over your gear to protect them. You might want non-lubricated condoms for this, but either will work.

If you or a buddy is wounded in any way and you don’t have gloves, you can use a condom as a glove. This will protect the wound from all the bacteria that are on your hands.

You can use condoms to tie around the wound to decrease bleeding. If you’re trying to put pressure on something with your hand, that’s going to become difficult after a while. Using a condom to create pressure around a wound for a while should work. You can use some sort of cloth between the condom and the wound to soak up any liquid.

You have to pack everything out anyway, and sometimes plastic bags or ziplocks can get bulky. If you use a condom for things like wrappers or other trash, they stretch enough to fit a lot in there while also compacting your trash. Of course, use common sense, because there are some things that will poke through latex pretty easily.

Hopefully these alternative purposes will convince you that condoms can be useful for many purposes, and that they’re good to carry for both spontaneous sexual endeavors and for (less fun) survival situations.

Graduating college with a BS in public health May 2020. Aspiring van lifer. I like trees better than people.