I had a bug stuck in my eyeball for half of Connecticut, so for that I am thankful it was not a long state. Aside from the annoyance of that bug, and the bug that flew into the same eye about two minutes after I asked a passing NOBO to help me locate it – Connecticut was thoroughly enjoyable. After rocks, roots, mud, and a combination of all three at times, it was a relief to be in this state with minimal obstacles lying in wait for toe-stubs, aka its flat sections, especially along the Housatonic River. 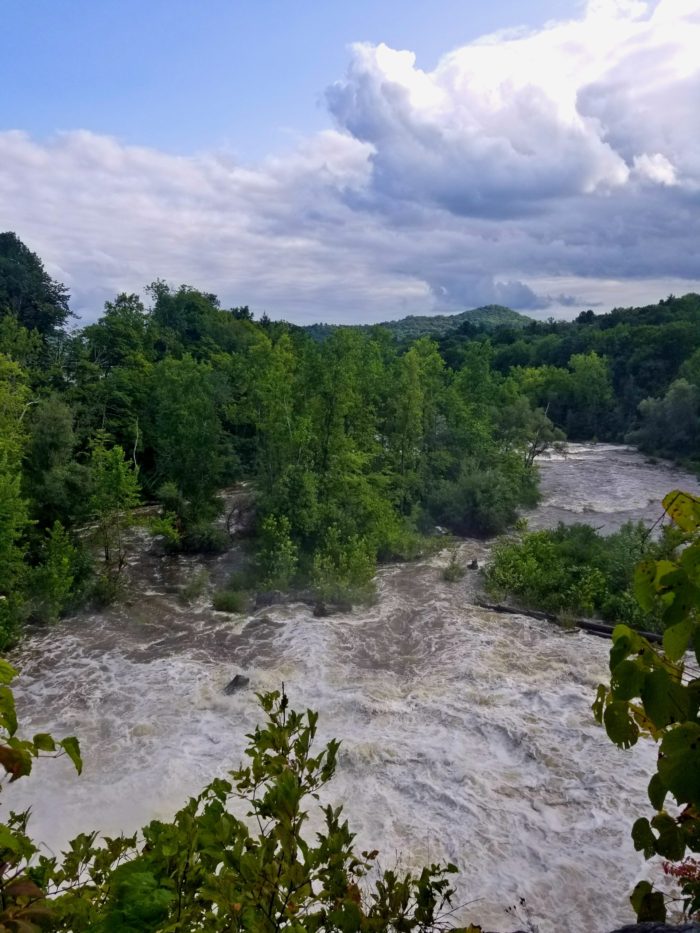 Due to Connecticut only being 52 miles, I’m going to break it down by each day. I’m sad to realize I took very few photos in this state, so I’m banking on my written content as ample entertainment this time.

Day One – The Day of Slackpacking

It’s the steep climbs that really make me wish I were elsewhere, like a beach, or a booth at McDonald’s, or just magically at the top. The gradual uphills are more my scene, though I sometimes crave a nice, flat basketball court once in a while. There were three climbs I did, but only one real steep one up Bear Mountain, and that was just plain fun. Going up was basically a rock climbing wall, with boulder scrambles in between. The top was the first view of Connecticut and provided a long ridge walk on a sunny day. Slackpacking, I got carried away and ran and walked and ran some more. The generous downhills and soft leaves were a nice path, and I tempted fate by running quite a few sections. I almost ate dirt a couple times, yet somehow I flailed about enough to catch myself each time. I hit 24 miles in eight hours (some miles were in Massachusetts before I crossed into Connecticut in case you do the math and realize it doesn’t add up) and was kindly rewarded with a hearty chicken parmesan and ice cream – thanks again, mom! 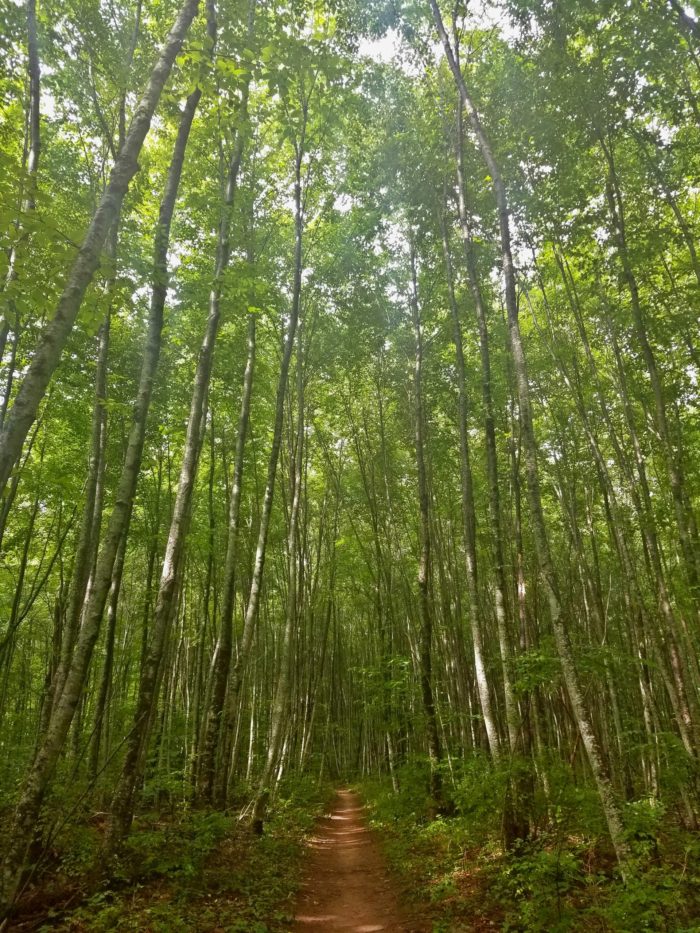 The best kind of walking terrain.

Started off the day late, as I was busy trying to eat all of the hotel’s continental breakfast. I sprayed most of my belongings with some of Sawyers Permethrin because the trail was known to be buggy up ahead. At 10 a.m. my mom brought me back to the trail and walked me two or so miles in before saying goodbye. With my mom in the lead, I enjoyed the leisurely pace we went at, and when she turned around to head back to Canada and the land of igloos – I took off. About an hour in I saw a snake. Naturally, I slowed down to look at it, assuming it would cooperate long enough to capture a nice, close-up photo. It’s like one of those horror movies where you watch a person walk right into a trap and think, “Why did you do that, where is your common sense?” Turns out it was a rattlesnake, and it rattled at me up close and personally enough to turn me temporarily into Usain Bolt. First rattlesnake I’ve ever seen and I would prefer to see no more. I went from Usain Bolt into Grandma Spirit pretty fast, because the rest of the day I got to listen to my knees and ankles, which joined a band called Crackle and Pop, anticipating a Snap that thankfully did not come. I made it 18 miles and camped alone. Camping alone can be refreshing when you fall asleep to only the sounds of nature. 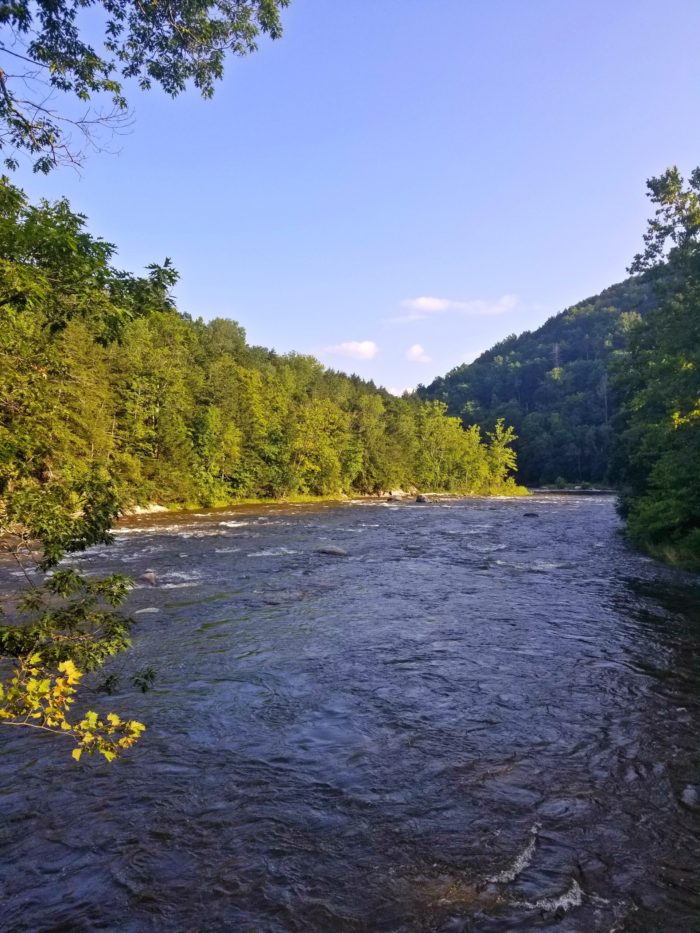 Another shot of the Housatonic River.

Day Three –  The Day of Yale Students and the Little Steamboat

I woke up fairly early and packed up nice and quick, eager to cross another state line. For about two hours my brain decided to put I’m a Little Teapot on repeat, but instead of “teapot” I was convinced it was “steamboat” and I couldn’t for the life of me figure out why a steamboat was described as “short and stout.” Sometimes you think of life-changing possibilities and sometimes you think of nonsense. You can’t help what the brain wants. On the subject of smarts, or lack of, apparently Yale promotes outdoor recreation because I passed about eight groups of Yale students on trail. It’s like a frosh week for them, which is a super cool thing for the college to encourage. I’m not sure how many miles they were covering as every time I came across a group they were not in fact walking. They were sitting, and usually right in the middle of the trail. It’s amazing how far in advance I could catch whiffs of soapy cleanliness before I saw them. I did 22 miles before I called it a day and camped at a site that was populated with a group of 12 students. They were cooking something complicated, and I sat and listened to their chatter, reminding me of the world outside of thru-hiking. I cooked, ate, set up my tent, and fell asleep before they were done washing up. 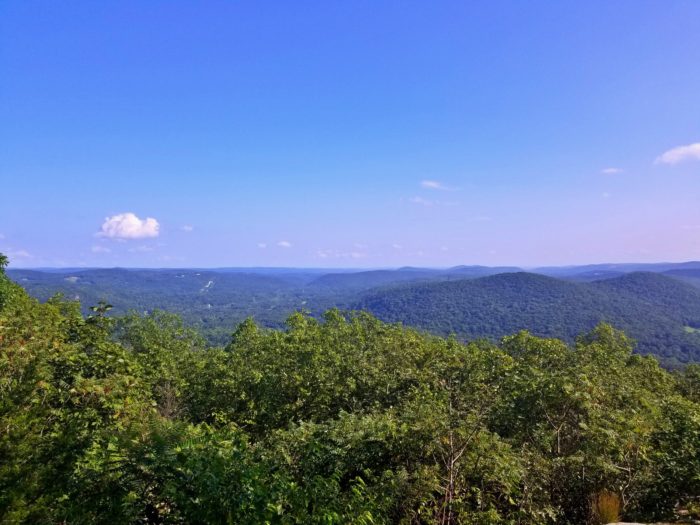 Looking across from Connecticut to New York.

There was no official sign welcoming me into New York, which was a bit sad, but good things are waiting for me there including the people ahead. It was a state where I walked alone for nearly all of it. Dreamer, Sun Chaser, and Cheeto aren’t too far ahead so I figure it won’t be long before I’m back with the tramily (trail family). It’s refreshing to walk alone sometimes as I find myself complaining more when there are actual people to complain to – yes, I am aware that’s a bad habit – but it also makes you appreciate company when you have it. Try as they may, I’m catching up. (More like the other way around since I’d like to think they’re totally lost without me, though they’ll probably argue this.)