A federal court has rejected permits for a natural gas pipeline that would cross two national forests and the Appalachian Trail in Virginia, saying that the US Forest Service bowed to private industry in approving the project.

The decision issued Thursday by three judges from the US Court of Appeals for the Fourth Circuit in Richmond, VA, is the latest setback for the 600-mile Atlantic Coast Pipeline (ACP) that would be built at a cost of $7 billion by a group of companies led by Dominion Energy, based in Richmond. The pipeline would carry natural gas from fracking fields in Pennsylvania and West Virginia through Virginia and into North Carolina.

The judges quoted from Dr. Seuss’s book The Lorax in their ruling: “We trust the United States Forest Service to ‘speak for the trees, for the trees have no tongues.’ A thorough review of the record leads to the necessary conclusion that the Forest Service abdicated its responsibility to preserve national forest resources.” 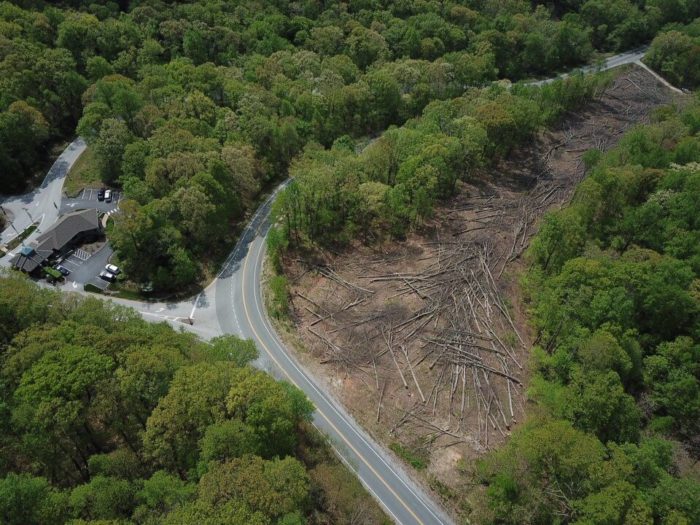 A path of trees cleared in Virginia to make way for the ACP. image via

The Southern Environmental Law Center, which joined other environmental groups in challenging the pipeline, praised the ruling.

“The George Washington National Forest, Monongahela National Forest and the Appalachian Trail are national treasures,” law center attorney Patrick Hunter said. “The administration was far too eager to trade them away for a pipeline conceived to deliver profit to its developers, not gas to consumers.”

Dominion and its partners said they would appeal.

“We respectfully but strongly disagree with the court’s decision,” Atlantic Coast Pipeline spokesman Aaron Ruby said. “We believe this stay is not only unwarranted, but overly broad. We are filing a motion for emergency clarification on the scope of the court’s decision.

Another natural gas pipeline, the Mountain Valley Pipeline, which would cross the AT in Virginia, has been temporarily halted by the Federal  Energy Regulatory Commission.