My Crappy First Night in the Woods with No Toilet

What better time to tell an embarrassing story than before I’ve even properly introduced myself?  Inspired by reading Hiker Trash Stories Vol. II, I decided I should write out my recent first experience of pooping in the woods.

In mid-November, I was on my first real 4-day backpacking trip on the Ice Age Trail in the Northern Kettle Moraine. (I posted a little bit about it on my blog.)  Camping is only allowed at designated sites, and some of the campgrounds were already closed for the season, so I had limited places to stay.  The first night, I reserved a backpacking shelter, which provided a pit toilet just down the hill, the second night, I stayed at the one campground that was still open, which had very nice vault toilets, and the third night, I took advantage of a rare dispersed camping site, a clearing in which I could set up camp anywhere within sight of the sign marking the area.  There was no toilet for miles, and I had been thinking it might be a good time to break in my fancy purple aerospace-grade-aluminum Deuce of Spades trowel.

As soon as I’d set my hammock up, a little after 3 PM, I scouted the site for possible pooping spots at least 200 feet (about half a block in city-dweller terms) away from camp in accordance with Leave No Trace principles.  It immediately became apparent that this would be difficult. 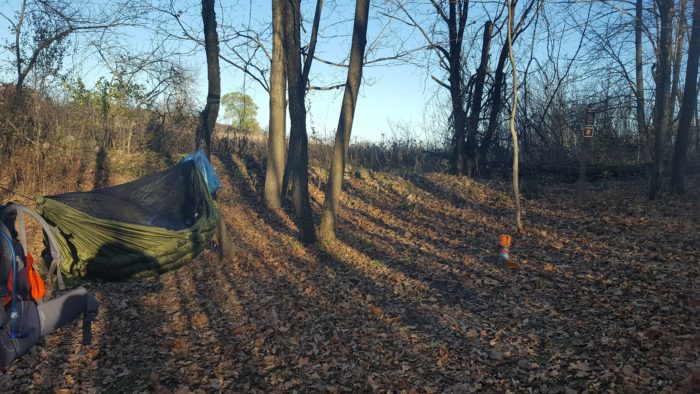 No Place to Go

On one side, there was dense brush with plenty of thorns. The next side had just a few trees and a pile of stones that looked like it might once have been a wall between me and a big open field of tall grass.  The third side was a fairly steep hill, and the last side had the path back to the trail, which couldn’t have been more than 100 feet away.

I walked up the hill to a spot near the top that seemed like it might be flat enough to work, but I quickly realized I would have no privacy there.  I could clearly see a man walking his dog in the field, and with almost all of the leaves off the trees, I could also see a family walking down the trail through the woods.  I really wasn’t ready to put on a show my first time trying this particular maneuver.

No Place to Hide

If I was going to poop here, it would have to be after dark.  However, that presented its own difficulty: I didn’t think I could make it up the treacherous hill after darkness fell.  My headlamp battery had died on the first night of my trip and I’d been unable to get another battery for it at the convenience store that afternoon because it was an uncommon type. (It later occurred to me that I could have just bought a flashlight for the time being, and immediately after this trip I replaced the headlamp with one that takes normal AAA batteries. )

I resolved not to poop until tomorrow when I could get somewhere more suitable. I very much wanted my first time to be a shining example of Leave No Trace that I could proudly tell my friends and family about.  I also, realizing that my bowels might not respect my extremely reasonable and logical decision, formulated an emergency plan to dig my cat hole on the field side of the pile of stones if I really had to go overnight.  I wanted to do everything I could to avoid that since it was much closer to camp than was appropriate, but it still seemed like a better choice than falling down a hill or getting lost in the woods in the dark.  Since the rock pile was a notable barrier between the campsite and the field,  and there wasn’t much room on the other side before the tall grass started, it seemed unlikely that other people staying there would venture to the other side and encounter my proposed emergency cat hole. 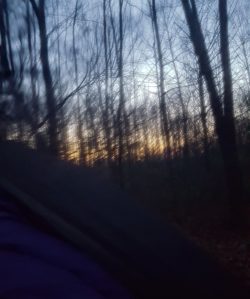 Between intermittent exclamations of “Hey look, there’s someone camped there!” from day hikers pointing at my hammock from the trail, I managed to change into my camp clothes.  Daylight Saving Time had just ended, so I knew it would be getting dark around 5 PM and I wanted to be ready.  I cooked dinner and then settled into my hammock with my Kindle (thankfully I had just gotten a new one with a built-in light after realizing how much headlamp battery I was using up reading on my last camping trip) to watch the sun set.

By 8 PM, I was already having a rough night.  Not only was lying my hammock for hours in the dark getting old, but I’d had an unfortunate accident with my pStyle (which I use to stand to pee), and had a very damp, chilly, and urine-scented bottom half because of it. I also already had to poop.  I think lying in the hammock in the dark for hours was starting to literally bore the crap out of me, but I was still determined to hold it.

I lay there for hours, trying to ignore my cold, clammy leggings and some of the strangest animal noises I’d ever heard.  The combination of woodland creatures, the last few dried leaves on the trees, and the field of tall dead grass made for frequent rustling noises that I struggled to identify.  I was intensely aware of how close I was to the trail, which led to a parking lot and road in less than a mile.  It wasn’t hard to imagine someone who had seen me camped there alone returning after dark, so I stopped breathing with every rustle, waiting to hear the dreaded sound of footsteps through the woods.  Earlier in the night, a deer had wandered into my campsite and my heart didn’t stop racing for half an hour.  Was being scared better than being bored?  Was it possible to be both at the same time?  I came very close to begging my partner to drive the hour and a half from Madison to come pick me up.

I don’t know what time of night it was when I woke up with a loudly gurgling stomach, but I knew that I was not going to be able to convince my digestive system to wait until morning.  It was time to put my emergency plan into action.  The moon had set, so it was truly dark.  I had my pack hanging on the line connecting my hammock to the tree and my bathroom kit in the outside pouch, so I grabbed that without too much difficulty and stumbled towards the pile of rocks.  It wasn’t tall, probably a little over a foot high, but I had underestimated the degree of caution necessary for climbing over it in the pitch dark, especially in unlaced shoes. I desperately had to go, but I didn’t want to twist my ankle on the way, so I moved slowly and carefully.  By the time I got to the field side, my legs were shaking.

I stabbed my trowel into the dirt and had to apply more pressure than I’d expected in order to cut through small roots.  By the time I had a hole deep enough to contain the 6.8″ length of the trowel, my hand was sore from the handle digging into it.  I pulled down my pants and squatted, feeling around behind me for the hole to make sure I was in position.  After the immense relief of emptying my bowels, I made good use of my toilet paper and stuck it where I thought the hole was, while trying not to feel around too much.  It was too dark to find a stick, so I had to use the trowel to push the used tp down into the hole and cover everything back up.  I tried to wipe my trowel off in the dirt, but it was by no means clean when I put it back in my pouch. I was glad that I was going home tomorrow and could give everything a thorough wash with lots of soap and hot water.

I wobbled back over the rock pile and collapsed into my hammock, somehow simultaneously triumphant and horrified 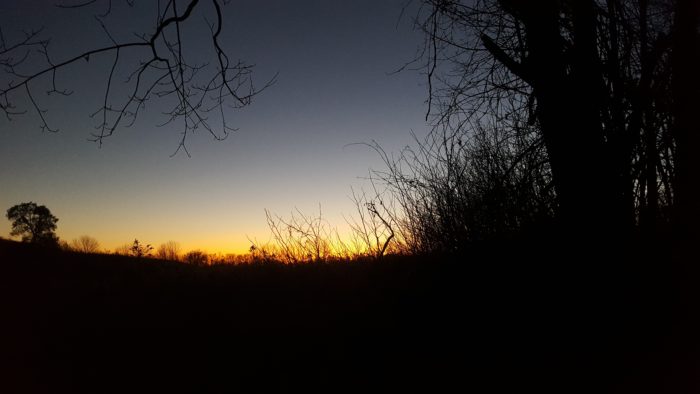 I was awake to watch the first light of dawn with immense relief.  I had made it through one of the seemingly longest nights of my life.  Once it was light enough to see well, I peeked over the rock pile and could find no trace of the hole I’d dug in the night.  I was surprised that I’d done so good a job my very first time and in complete darkness.  I almost wondered if it had really happened.  Unfortunately, my stinky trowel proved to me that it wasn’t a dream.

I myself probably still smelled vaguely of pee, and it’s a testament to how much my partner loves me that at the end of that day’s hike he picked me up and took me out to lunch anyway.