Crossing the Mason-Dixon Line: AT Days 64-66

My parents dropped me back off at Bear’s Den Hostel at 8:30 and I bid them farewell with a “see ya soon”, as I began to make my way Northbound once again. The first three miles of my day consisted of the tail-end of the Rollercoaster, which was easier than the first half. Right after this section, I crossed the VA/WV border sign (although technically the trail followed right on the border for much of the day). I snapped a photo and headed into my new home of West Virginia, if only for a brief moment.

The remainder of the day was very flat with easy terrain, consisting of the same oak forest scenery throughout. It was colder than normal out, but that didn’t stop the numerous day hikers and weekend backpackers that were headed down the trail Southbound. Much of my day was spent reflecting on my past month traversing Virginia.

I mostly look back on my time spent in Virginia with very positive memories; Virginia is truly a wonderful state but just gets a bad rap because of its length. For any potential thru-hikers reading this: don’t stress about Virginia’s length and the Virginia blues, simply just take it from town-to-town, enjoy the many wonderful highlights this state has to offer, and you’ll come out the other end a stronger hiker, physically and mentally.

12 miles in, I stopped at the David Lesser Memorial Shelter, which was easily one of the nicest shelters I’ve come across. It featured a back patio area with long benches and a separate gazebo-type building with a picnic table. Three trail maintainers from the Potomac Appalachian Trail Conservancy soon joined me for lunch and were very intrigued with my journey thus far. It was really beginning to dawn on me that I had come quite a ways.

7 more flat, uneventful miles eventually led me to the Susquehanna River, where the AT crosses on a bridge on US 340, and officially hiked into Harpers Ferry, WV. I took the brief side trail to the Appalachian Trail Conservancy’s Headquarters, got the iconic photo taken of me in front of their office for the scrapbook, and headed down the street to my hotel that I had booked for the night. 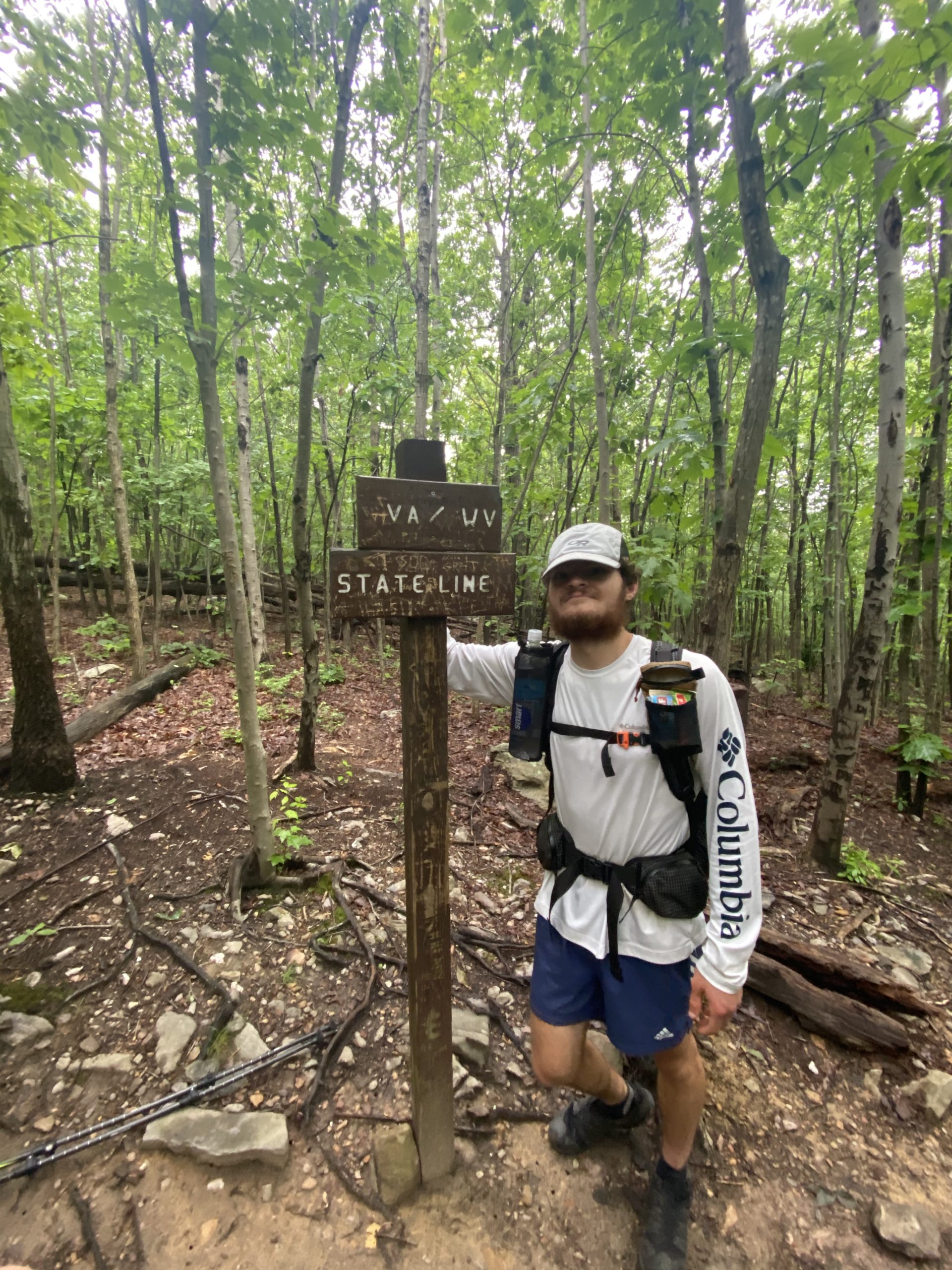 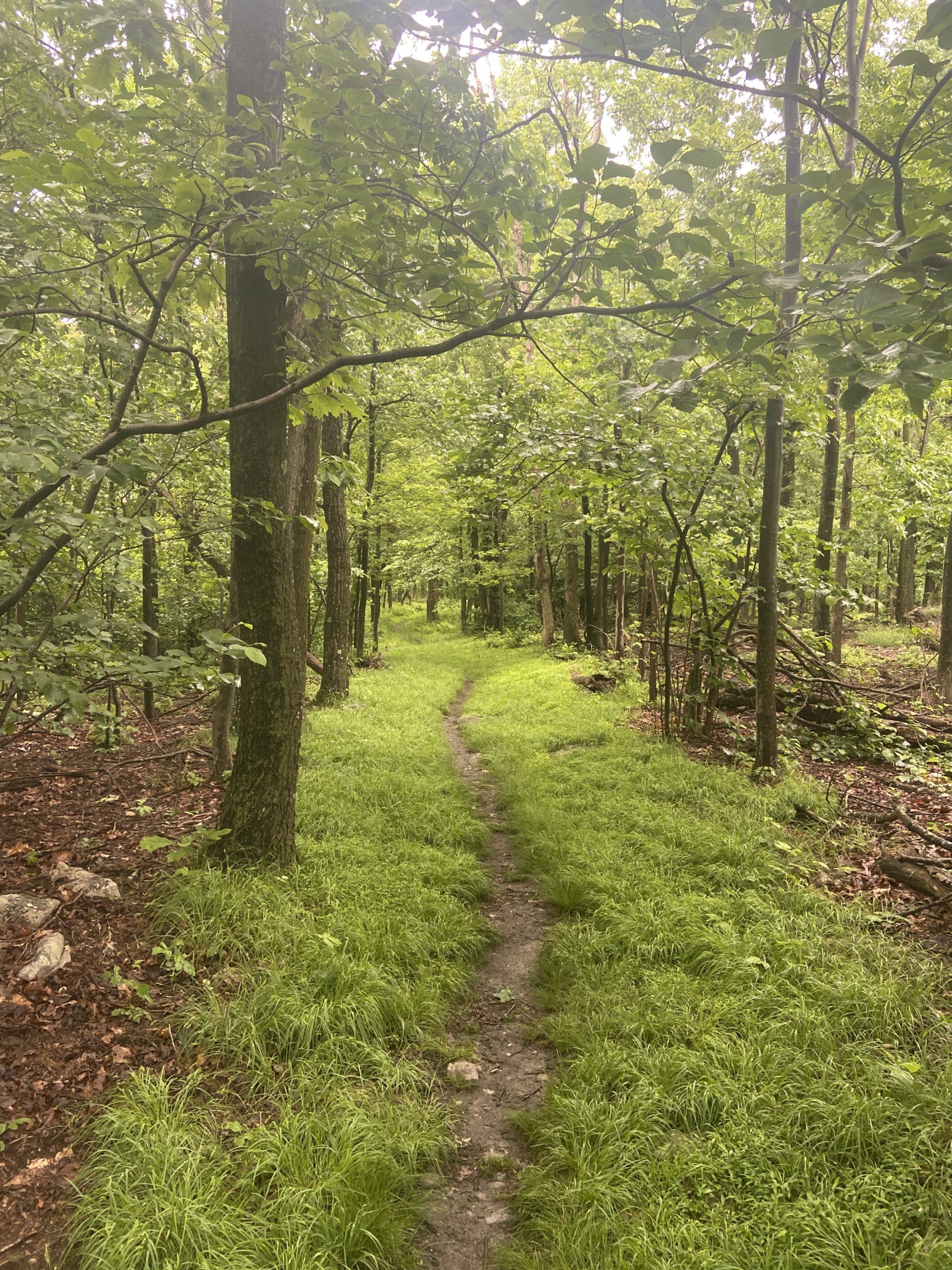 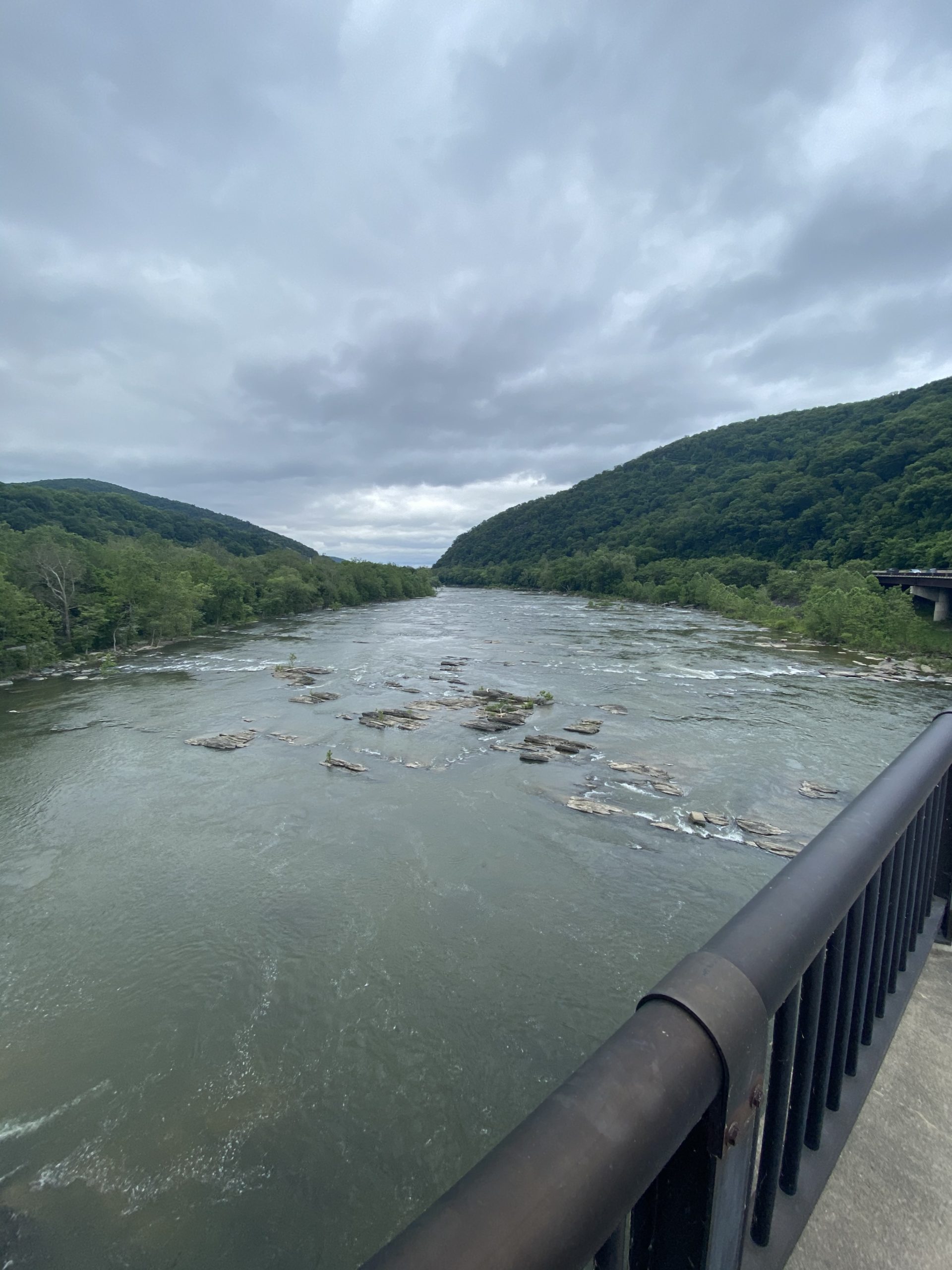 I slept close to 11 hours in my hotel room and felt fully recharged as I made my way back on trail at 7:00. The first mile goes through the historic downtown of Harpers Ferry, crosses the Potomac River on the Goodloe Byron Memorial Footbridge into Maryland, then follows along the C&O Canal Towpath,a flat gravel biking/walking path, for three miles before climbing back up into the woods.

A very flat but rocky 7 miles on the South Mountain Ridge followed before reaching Gathland State Park, a site close to many historical Civil War battles and events. The trail remains flat in this section but the rocks became more frequent and very tedious to walk through at times. The number of day hikers was increasing by the mile, as everyone wanted a taste of nature on this beautiful Monday on Memorial Day Weekend. By the end of the day, I must’ve seen at least 150-day hikers on trail.

The rocks thankfully dispersed for the most part as I descended down to Reno Monument Road, where I took my lunch break 17 miles in for the day. The one and only thru-hiker I saw that day joined me for lunch; it was just his second day of his thru-hike, as he was a flip-flop hiker who started from Harpers Ferry. My second day on trail seems impossibly far away.

From there, the AT briefly climbs up to the site of the original Washington Monument, built back in 1827 before the one in D.C. I took the stairs to the top to get a great view of the West Virginia Farmlands to the West. I continued on as the trail remains flat after descending from the monument, before the climb up to Annapolis Rock, which was the toughest part of the day. The site has many good flat spots for tents, and not many other hikers would come here to camp as I enjoyed a great sunset from the rock with a couple of other thru-hikers. 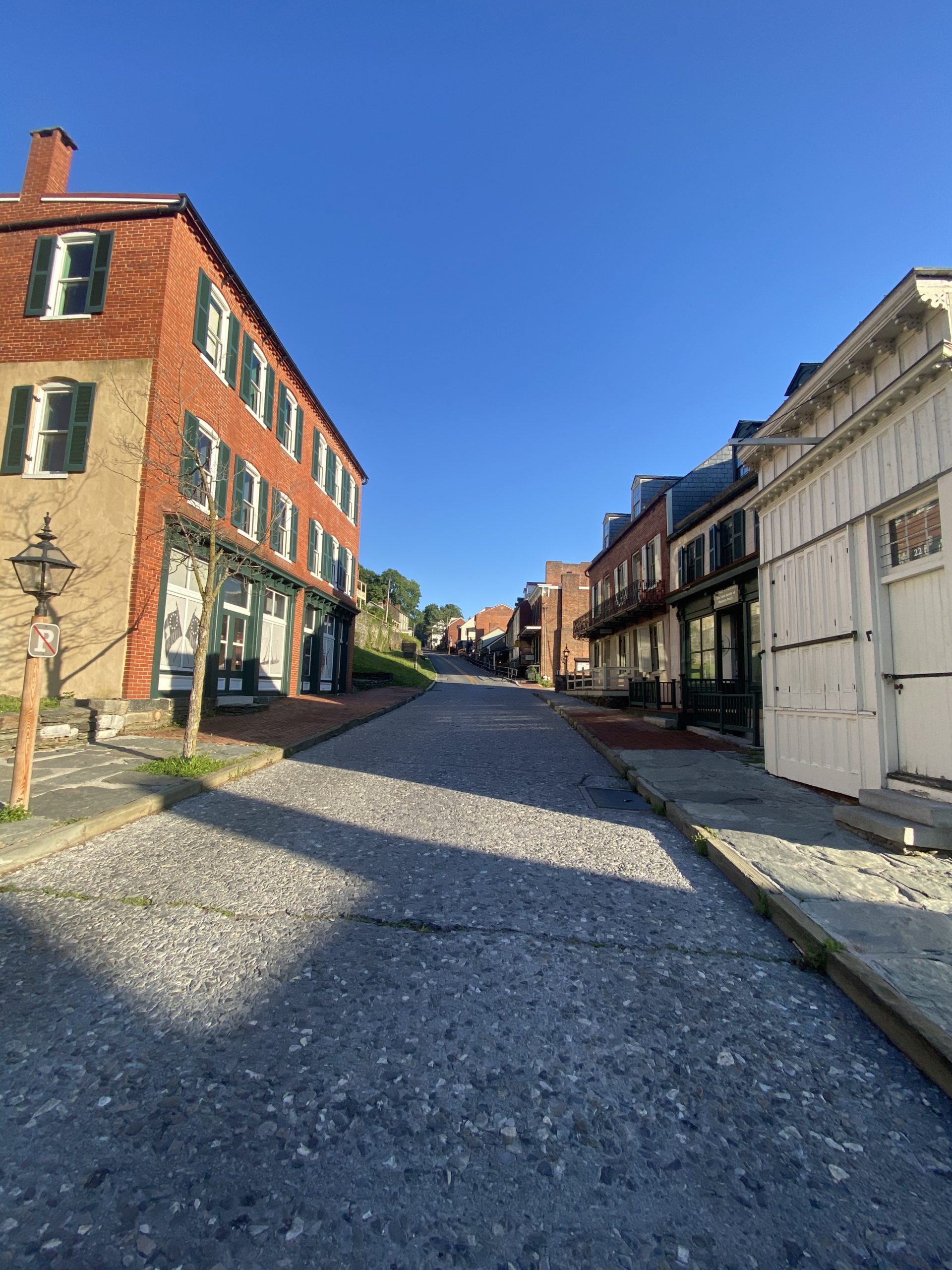 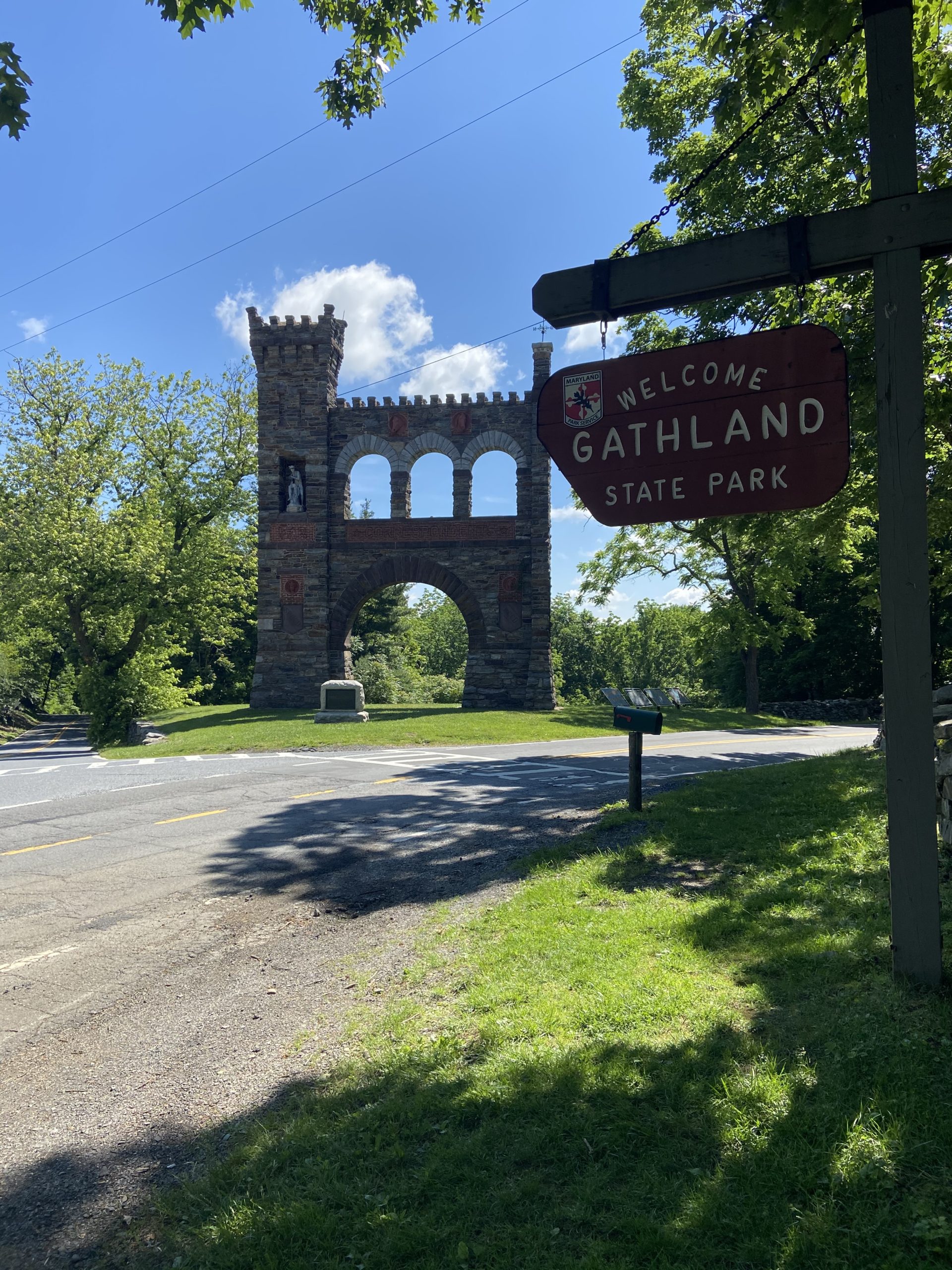 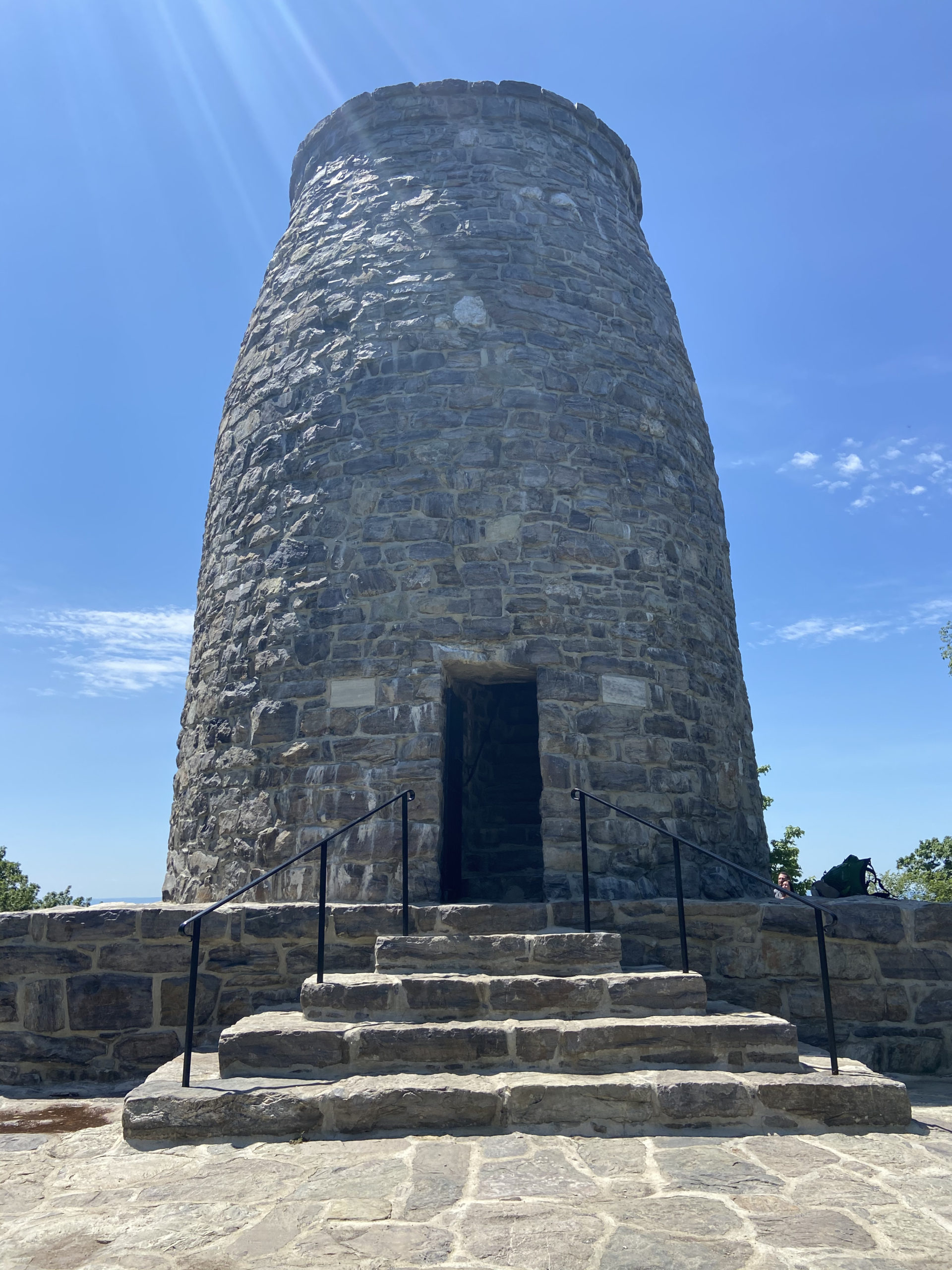 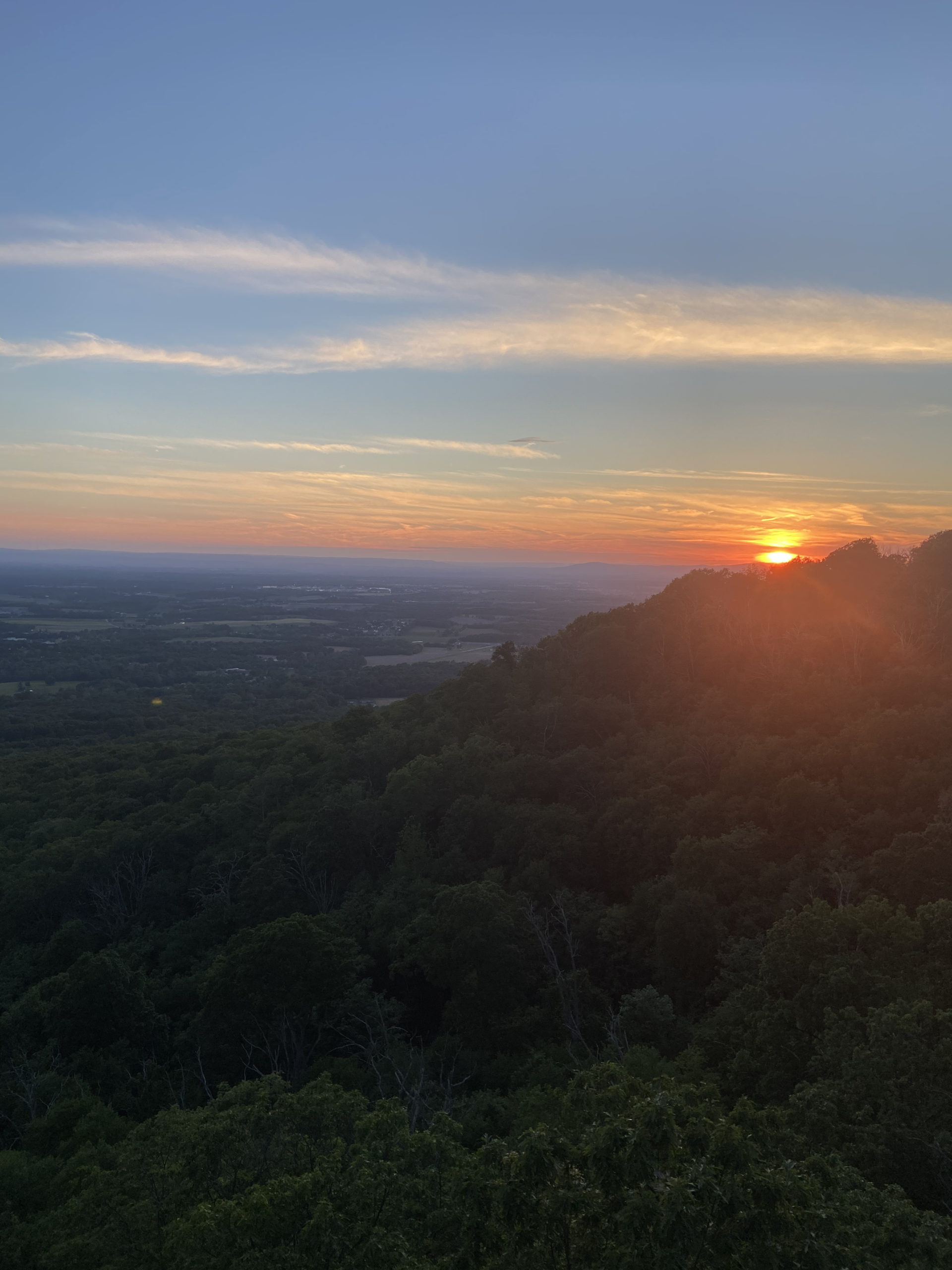 I hiked the .25 side trail back to the AT and continued on down the trail Northbound, with my sites set on the Mason-Dixon Line just over 16.5 miles away. The terrain to begin the day was very flat and smooth; other than a brief meadow walk 7 miles in, the entire day was spent in the oak forests, very similar to the day prior.

As the miles flew by, the rocks slowly began to increase as the day went on, slowing down my pace. Today also included more short and steep bursts of incline than the previous day, and the climb out of Raven Rock Road was the toughest the state has to offer in my opinion.

16 miles in I walked through Pen Mar Park, and half a mile later I arrived at the Mason-Dixon Line, officially entering Pennsylvania and the Northern States of the United States. I was stoked to have made it back to the North; this was the most anticipated border crossing for me yet. I made my way to Pen Mar Road, where Trail Angel Keystone picked me up and shuttled me into the close-by town of Waynesboro, Pennsylvania.

I wasn’t spending the night in town, I just went in to resupply and eat a good lunch. Keystone picked me up in town and drove me back to where the AT crosses the Pen Mar Road. I hiked a brief half-mile down to Falls Creek, which had great tent sites and was the perfect spot to call home for night #1 in Pennsylvania. 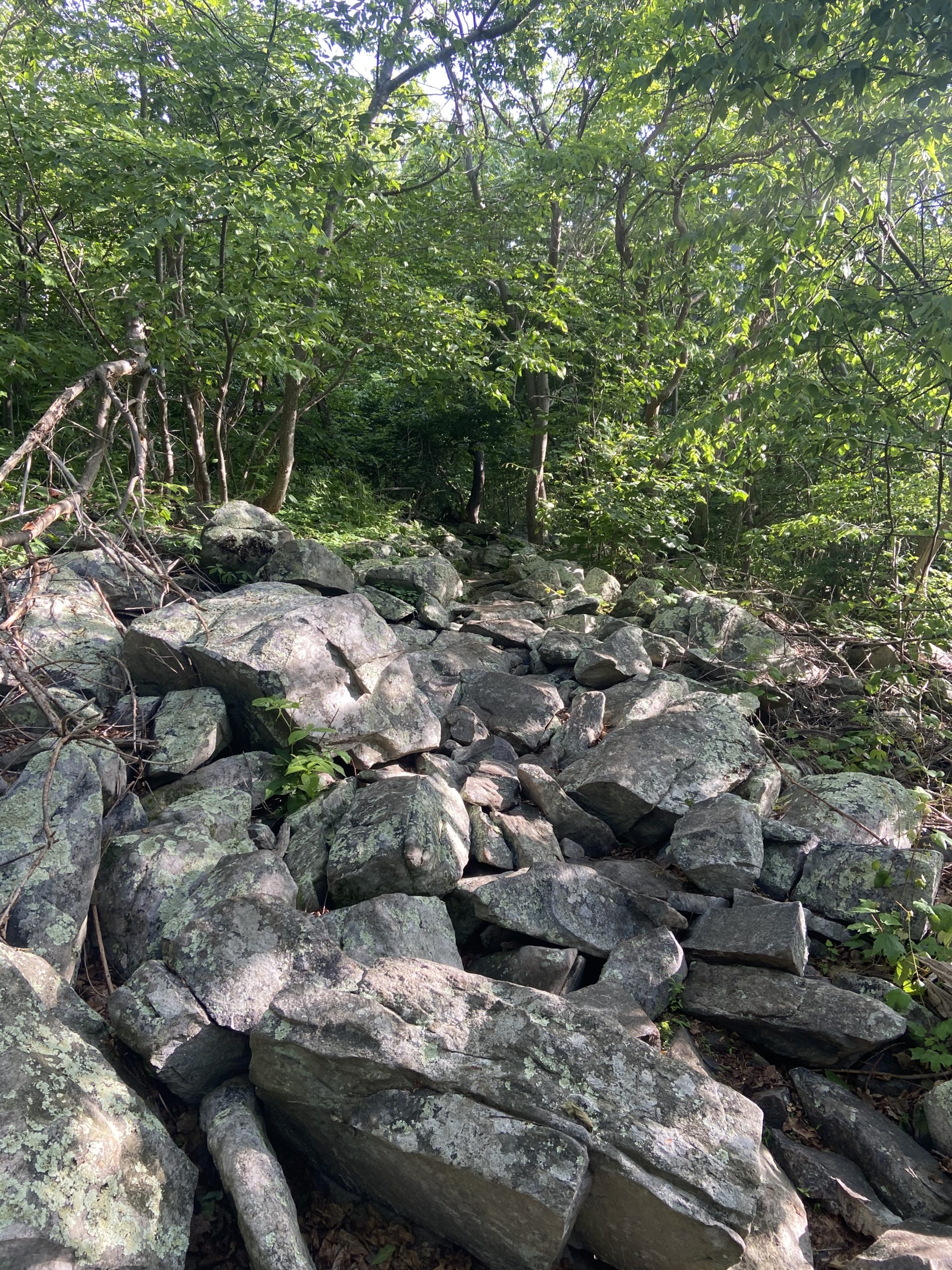 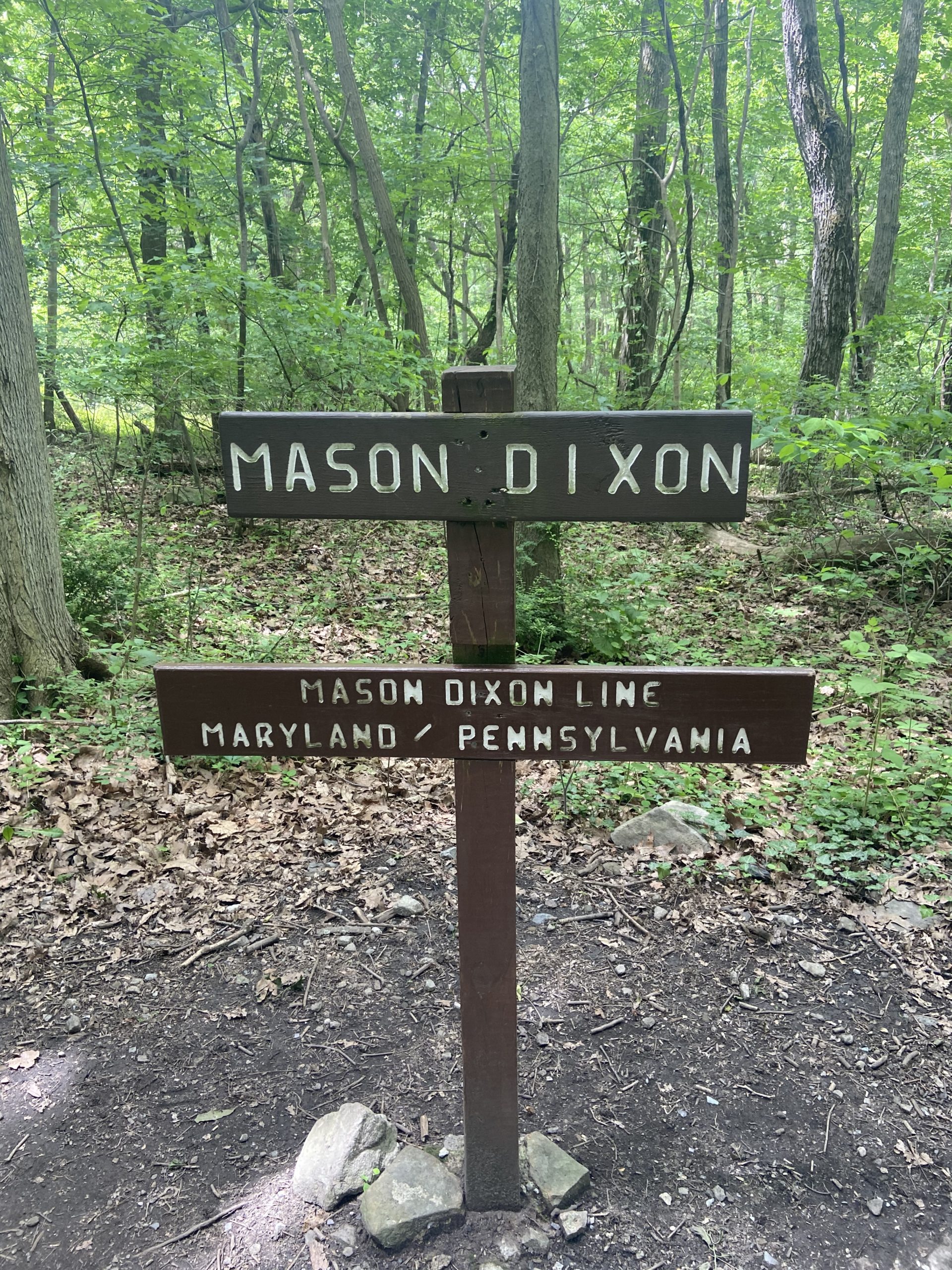 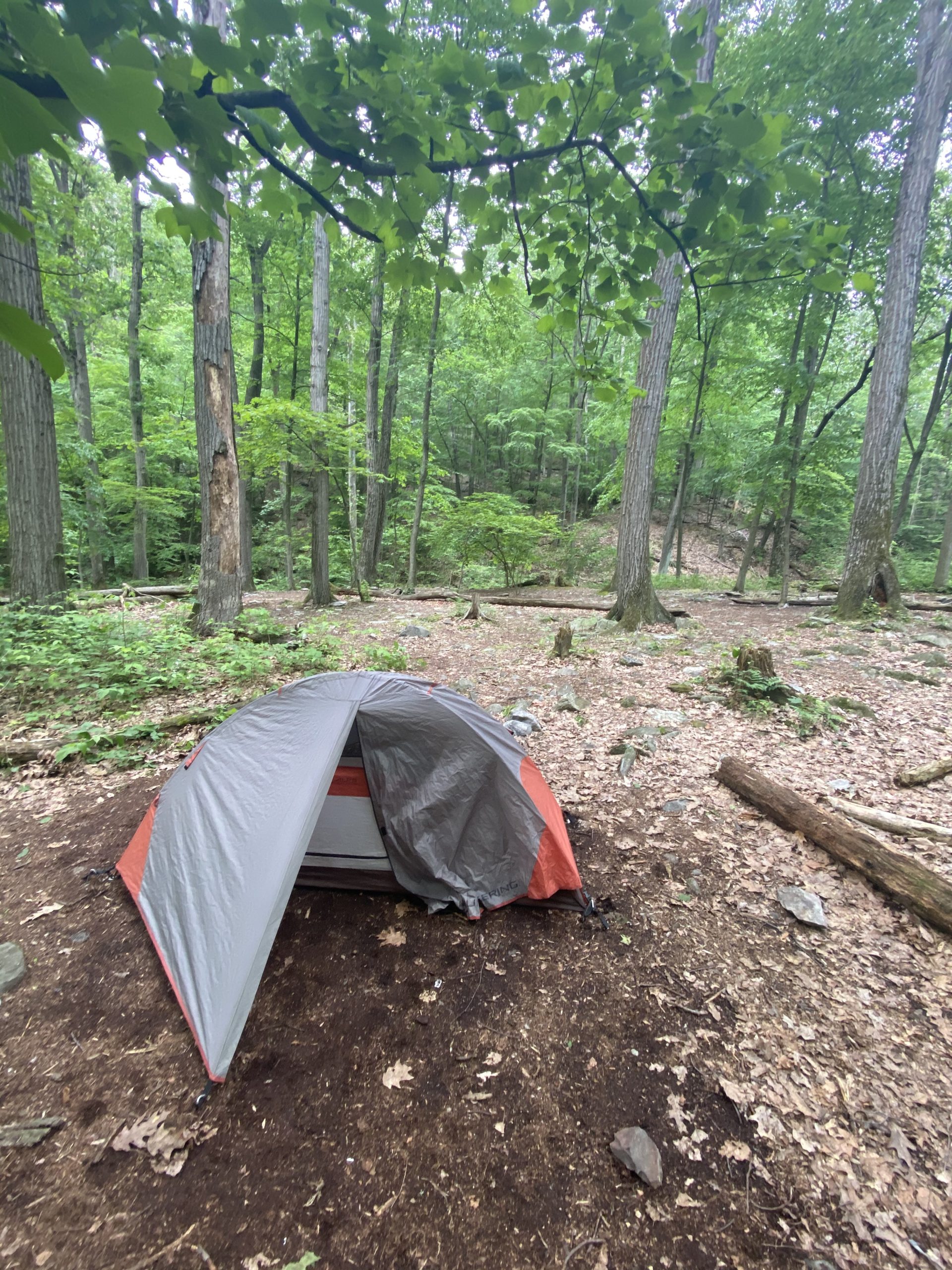