I’m currently in Front Royal, about 965 miles into the trip!

Since I last posted, we’ve come almost 300 miles and have really ramped up the intensity. I’m still in Virginia, but only for about two more days. We’ve completed the Shenandoahs and passed through some of the most iconic Appalachian Trail spots. We’ve had our biggest milage days, and our most incredible trail angel generosity. In short, it’s been a really good stretch.

At this point, the trail feels much more mental than ever before. Our highest day was 35 miles, but on an average day it’s close to the 25 mark. Early on, when we were taking our time, we’d justify low milage by saying “it’s ok, because we’re going to crush mad miles in the mid-Atlantic states.” Well now we’re here, and the crushing has commenced. Our bodies are used to the routine of waking up and walking all day, and the milage achieved is really more a matter of waking up early and mentally committing to the long haul.

I’ve found myself thinking a lot about my college lacrosse team in the last few weeks. I think the Virginia heat giving me flashbacks of practice under the southern California sun, also, this is the most I’ve physically exerted myself since I was part of the team. I’m hearing my coach in the back of my head every time I stumble over a rock, “nothing casual!” and every time I want to call it quits I hear “dig deep!” and every time I’m chasing daylight it’s “giddy up!” While I haven’t really thought all that much about the team since I quit after my sophomore year of college, I really do think being a college athlete gave me some grit and really showed me  how hard I can push myself when I want to stop. So, if any of my Lady Cougs are out there reading this: RSKA C-MONT, and, I’m thinking of you!

Speaking of miles, (because it’s all we speak of out here anyway) Rocky developed a system to ensure we finish in time for school in the fall. If we average about 17.5 miles a day between here and Katahdin, we should finish on August 15. As I mentioned before, we’re currently hiking significantly more than that. Every time we do more than 17.5 miles we put them in “the bank.” We have two accounts, a “savings” account for when we get to The Whites in New Hampshire and we can’t do 17.5 a day, and a “checking acc0unt” where we can store extra miles for zero days and mid-day adventures. The extra miles from 17.5-20 go in the savings account each day and all miles over 20 are added to checking.  We’ve only used the “system” for a few weeks now, but it’s really relaxed my mind knowing exactly what I’m working with for milage against my deadline.

Alright, and as usual, here are a bunch of snippets of awesomeness from the last few weeks: 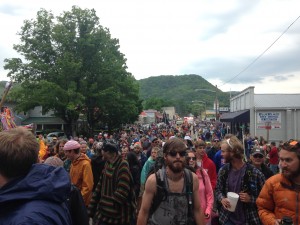 Trail Days was so much fun! It was fun to see a lot of hikers that we hadn’t seen in weeks and finding out where they were on the trail and how the hike was going for them. Gumby, a previous thru-hiker who section hiked with us from Hot Springs to Erwin met up with us and I got to meet some other Appalachian Trail bloggers too while I was there. 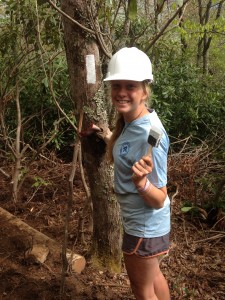 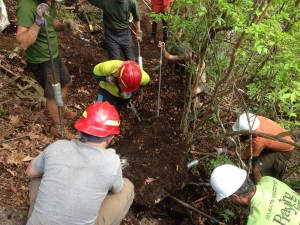 Rocky, Easy Rider, and I all participated in Hard Core Kincora. Hard Core is a two-day trail maintenance event that follows trail days and has been going on for 14 years now, run by leader and legend Bob Peoples. A bunch of current and previous thru-hikers all get together and spend two days working on a project. They provide us with dinner and snacks, we can stay at Kincora, and they arrange ridges for us back to the trail.  My crew worked on cutting out a steep section of trail up to Little Rock Knob (a few miles south of Roan Mountain) and replacing it with a long switchback. It took about 40 people two days to create this 1600 foot section of trail. Before Hard Core I had wondered about the work that goes into building trail; who does it, and what kind of tools do they have? Now I know that it’s by in large all volunteers who are using nothing but muscle and some primitive tools.

It was really hard work but gave me a completely new appreciation for the trail. While I still curse the uphills on hot days,  I also admire the fine work that went into every rock staircase. Next year will likely be the last year for Hard Core Kincora, so if any 2015 hikers are reading this, be sure you get in on the action while you can! It was hands down one of the most rewarding parts of the trail for me so far! 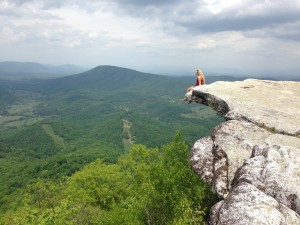 After returning from Trail Days I had two days where I decided to really test my limits. We didn’t get back to the trail in Newport until 2pm that day, and we were about 53 miles from Daleville.

I wanted to do the stretch in two days, Rocky and Easy Rider didn’t, and so we parted ways for a few days. The first day required me to do 20 miles starting after 2pm, which I completed by getting into camp at 9:40pm. The next morning I was up by 6 and walking before 7 with 33 miles ahead of me. My biggest day to this point had been 29.6. I knew 33 was on the edge of my ability level, but that if I could do it I could do anything. That day I went over Dragons Tooth, McAfee Knob, and Tinker Cliffs. I made it into Daleville at 8:41 just as day light started fading. I was very proud of myself, and I set a new personal bar. 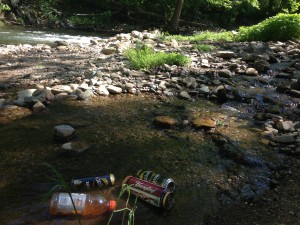 I promise it hasn’t been all work and no play out here–the whole group reunited shortly after Daleville, and we found ourselves at a lovely swimming hole on a sunny day on the two-month mark. We hitched into town for burgers and then returned to the river to spend the afternoon in the sunshine. 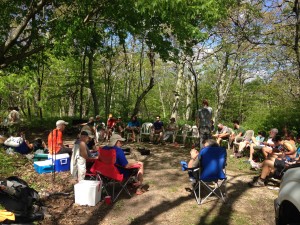 Quesadillas, salad, lasagna, bread pudding, rolls, and blueberry-cherry cobbler–almost entirely made with dutch ovens–now these are the kind of things one takes an entire afternoon off for! We stumbled into this hiker feed shortly before Glaslow after hearing about it for days, apparently it was advertised at a nearby hostel. A lot of hikers purposely slowed down or sped up in order to make it, and man, it was delicious! 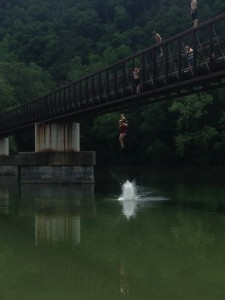 If you’ve read the recent article about 10 Fantastic Thru-Hiker Traditions, you’ll recognize this bridge. The James River Foot Bridge is the longest foot bridge on the AT. Naturally the AT hiker crowd is pretty adventurous, so convincing us to jump of a bridge doesn’t take all that much arm-twisting. 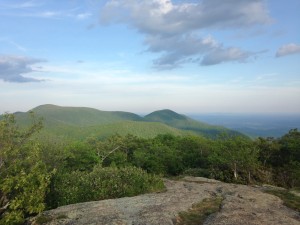 View from Spy Rock near the end of the 30 mile day.  It was here that Easy Rider exclaimed “Townnn! I need Town!”

As I mentioned above, my 33 mile day set a new bar… one that was quickly matched and surpassed. Less than a week after what I thought would be my biggest  day we pushed it even further. For what reason I don’t remember (if there ever was one) we decided to do back-to-back 30+ days into Waynesboro. The first being just over 30 miles and the second being just shy of 35 (34.7 I believe).  Late into the 35 mile day (which we thought was probably going to be a 30 day with a short 5 miles morning hike) we realized that if we hiked fast we could do the full 35 and get into Waynesboro before dark. About 20 minutes after that realization the sky unloaded and there was a huge thunderstorm. The storm gave both the motivation for a warm shower and also it cooled the air enough to want to push out the final couple miles.

We found ourselves a little delirious and alternatively running, panting, and laughing for the last seven miles– “Does this sparkle?” “Sunshine!” (see South Park S11E14 for reference). We made it to the road at exactly 8:04. Within an hour we were all at Mi Ranchero, dry, and with frozen margaritas in hand. Enter into the picture: Minty

Minty was more than a trail angel, he was a trail god. He picked us up from the side of the road and brought us to that Mexican restaurant. Then, he offered to have us stay at his house.”Minty, do you have a shower?” “yep” “and beds?” “yep” “and how about a sauna?” “yep, it’s in the basement.” “wait, seriously?” “yeah.” 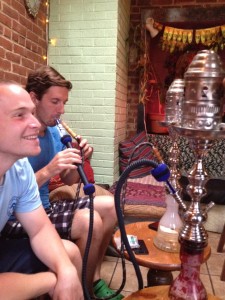 We stayed at his place for three nights and he even let us borrow his car on of the days. Over the course of two days between Waynesboro and Charlottesville we scratched every town itch we’d had since Georgia: we went to the movies, to a mall, got bubble tea, went to a hookah bar, ate sushi, ate Thai food, oooh, it was glorious! 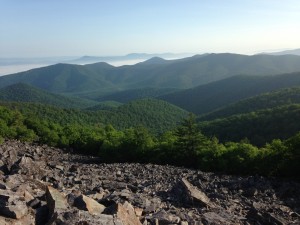 After Waynesboro we headed into Shenandoah National Park for the next four days. Lucky for us, we had great weather for the entire stretch. Also lucky for us, there were Waysides conveniently placed so that we could stop for a hot meal and blackberry ice cream each day. 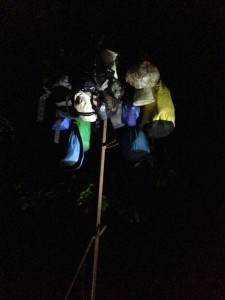 Must be in bear country

Many hikers give up the practice of bear bagging early on, realizing that mice are probably the only critters that are interested in our food. Not here though! Bear bagging is back, because…. 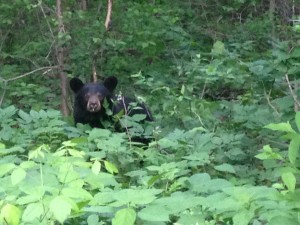 There’s lots of bears! I saw nine bears in three days through the Shenandoahs. It was awesome.