All The Way, Hobble-It, and I set off together. The day was almost chilly, which made the walking nice. Plus I felt no shin pain. Our first water source was a rather turgid stream in which I spotted three frogs. It filtered clear and tasted great. The trail took us over a couple scenic ridges that offered views of trees, houses abutting green pastures, and large lakes.

Shortly after mid-day we dropped into Culvers Gap. We ran into Cricket, Come Along, and Bumblebee returning from lunch at various spots. A sign indicated trail magic 1/4 mile ahead so we went to check it out. A kindly man named Moose sat by a table laden with all sorts of snacks and a stuffed moose. I enjoyed a handful of cherries, a perfectly ripe nectarine, and peanut M&Ms. While we sat in camp chairs and ate, Moose told us a story about throwing a jacket over a moose’s head to prevent it from charging him. 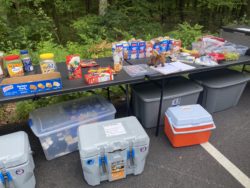 After snacking we returned to the gap and went to the Mountain House Tavern. We sat with a man named Jet Ski, whom All The Way had hiked with before getting his trail name. I got sweet potato fries while everyone else got burgers and fries. Jet Ski said that he turns 67 tomorrow. Very cool that he is out here doing the trail.

Going uphill felt harder with a full stomach. The four of us chatted about how we would group the states into regions and the differences between areas of the country. Jet Ski continued on when the rest of us stopped to use a shelter privy. All The Way, Hobble-It, and I camped two miles short of the following shelter. I found a red-spotted newt near my tent, good luck!

Once again I started down the trail with All The Way and Hobble-It. I kept hoping for an early morning bear sighting, but no luck. It was an easy walk to Mashipacong shelter where I got a liter of water from the freshly filled cache. So nice of people to provide water to an otherwise dry shelter.

A series of rocky ups and downs brought us to High Point State Park. It had a building with indoor restrooms and a small gift shop. A sloping grass lawn contained a pond so covered in algae that I initially mistook it for part of the lawn. When I explored, a bunch of green frogs leapt into the pond’s water. Hobble-It and I waited for pickup by Mosey while All The Way continued onward. 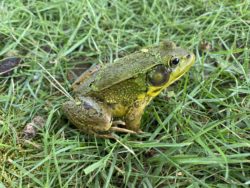 Mosey took us, Crexit, and Stormcat back to her home where she had a 6-bunk bedroom. We showered, put on loaner clothes, and did laundry. At first I felt antsy to be done hiking so early in the day; then my bed looked inviting and I laid down to make use of the WiFi. It felt great to be in a home that is lived in and loved.

Mosey took us to Walmart for resupply and dinner food. Hobble-It sautéd red pepper & onion and added it to vegan, GF cheesy macaroni. We split that and a vegan, GF, vegetable pizza. Yum, yum! We sat at the big kitchen table with the others. Crexit is from England and Stormcat is section hiking, though she did the entire trail in 2013. After dinner I chatted with my parents and sister.

Habituated by the trail, all of us in the hostel were awake before 6 am. I enjoyed a black cup of coffee and watched a teenage bear stroll from the front to the side of the house. Crexit missed the bear so we walked through the backyard to see if it reappeared. The wet grass felt refreshing on my bare feet. Mosey cooked a delicious breakfast that we ate as a group. Then she took Hobble-It and I to the Port Jervis station where we caught a train to NYC.

We chose a zero day for multiple reasons. Hobble-It hadn’t been to the city before. It gave Sonic Boom and Serendipity a chance to catch up to us. Also our feet welcomed a day off from packs and rough trail. I won’t describe the day in detail, but it did entail eating delicious pizza for lunch. 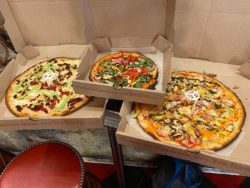 Aside: How does a homeless person use a restroom in New York? It took me three tries at Starbucks, a thrift store, and Whole Foods before I found success.

Mosey is an exceptional hostel owner. She picked us up from the station in the evening. Back at her house we met up with our friends and gave them hugs. Serendipity stayed at the hostel for the night while Sonic rode with us back to the trail. We said our goodbyes to Mosey then night hiked less than two miles to a shelter. It was a relief to be back in the woods and away from civilization. I gratefully climbed into my tent and quickly fell asleep.

I slept well and woke early from a pleasant dream. The trail started gently downhill. In a field of cut hay I spotted six young wild turkeys followed closely by their mom. A white tail deer went crashing through thick brush before stopping to give me a curious glance. Bullfrogs croaked in a small pond and rabbits darted away from the trail.

Five miles into the morning, Hobble-It and I took a side road to a shelter located on private land. We got well water from a spigot and met Jake the donkey. Jake was friendly and let me stroke his soft head. He was very interested in my Cheetos; I wished I had carrots to feed him. As we walked back to the trail, we met Sonic and a coworker who had joined him for a couple miles. 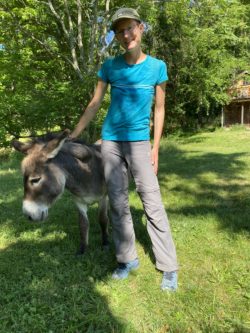 The trail became utterly flat, going alongside a paved road then around Wallkill National Wildlife Preserve. Before ascending Pochuck Mountain, I got water from a spigot at the back of an abandoned house. Sonic and Serendipity went to a deli. Hobble-It and I ate lunch in Pochuck Mountain shelter. My favorite part of the afternoon hike was a long series of boardwalks that wound through a wetlands area.

At NJ94 we gathered as a group to hitch to the Warwick Drive-In. The theater allowed tenting for hikers and free movie viewing. We set up tents on a grassy hill then walked to the adjacent grocery store for snacks. I was excited, my first time at a drive-in! We got a radio and tuned into Thor Love and Thunder. I watched the entire film as one by one my friends went to sleep. There was a second film, but I was too tired for it.

The four of us caught a shuttle back to the trail from an Australian guy, Stone Legs, who had hiked the trail three times. We stuck together through the morning. I had good conversations with both Serendipity and Sonic. Sonic called a snack break at five miles then we ate lunch at the New Jersey/ New York state line.

The New York trail stuck to an exposed, rocky ridge line for miles. It offered great views, but was also hot. At times, I had to use my hands and feet to scramble up or down rocks. I went through my water faster than anticipated. Eventually the trail descended to a parking area where I came across Serendipity and Brad, a friend of hers. He offered me a cold seltzer water which I happily accepted. The three of us drove to Bellvale Creamery where Sonic and Brad’s wife Diane were waiting. Hobble-It hiked in a few minutes later. 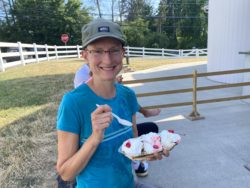 The creamery is a short road walk from the trail so a large group of thru hikers sat in the shade. I got a large banana split and ate every single bite. It was delicious! A perfect day for ice cream! We sat around chatting, drinking fresh water from a spigot, and charging phones. After a time, Brad and Diane departed and we hiked two miles to Wildcat shelter. Looking around the camping area I saw a lot of people who were at the theater last night.