Greetings from Harper’s Ferry! The almost-sort-of-not-quite halfway point! We were supposed to just have a quick few miles into town, get our photo taken and pick up our resupply box, but this little 13-mile section called the Virginia Roller Coaster gave us quite a beating yesterday. 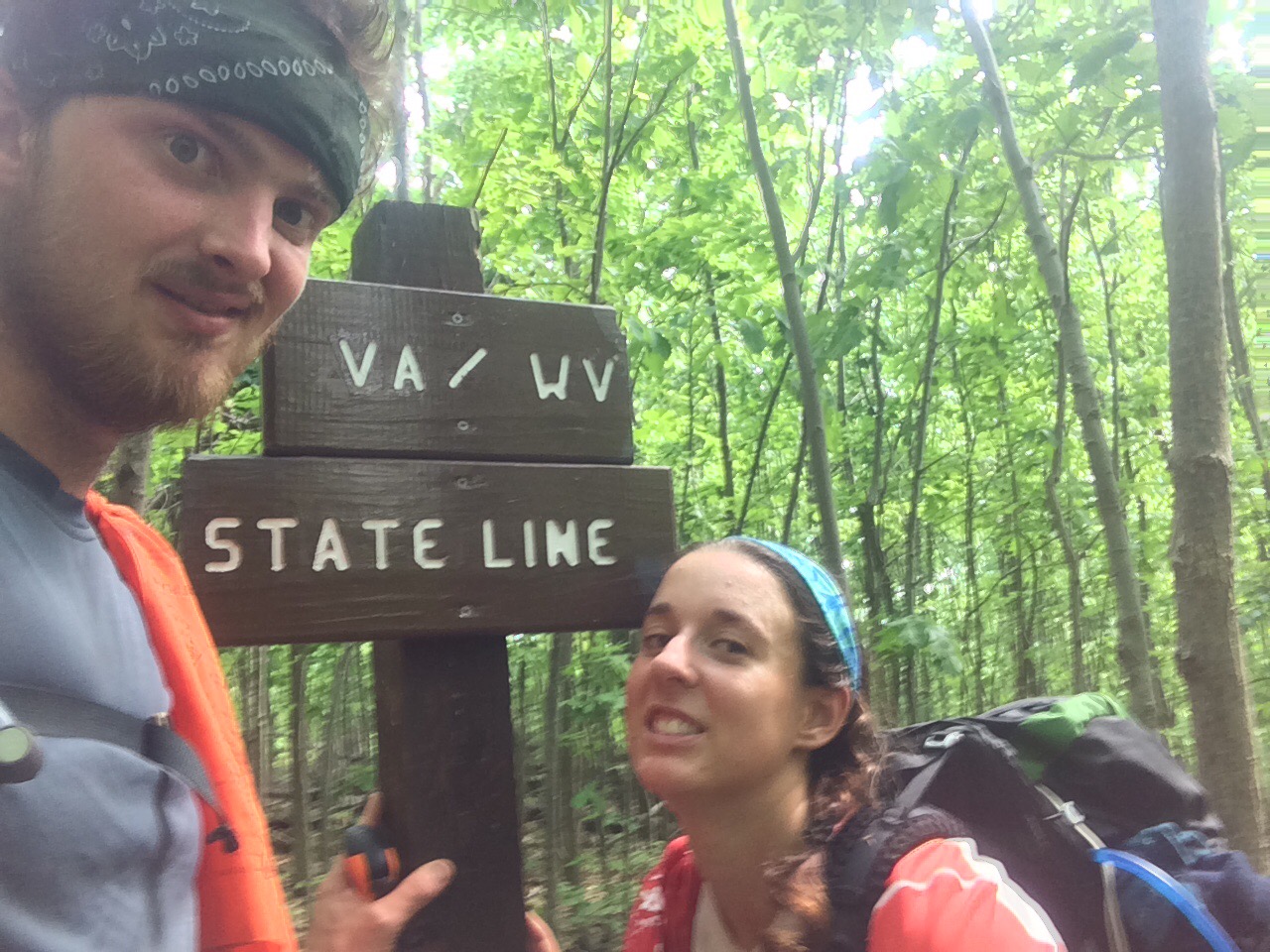 this state line was after 9 PUDS

﻿After ascending and descending 11 steep climbs (5,000 feet total gain and loss) we didn’t make it to our planned campsite. We took a side trail five miles earlier, and wound up at the Blackburn AT Center, a donation-based headquarters for the local ATC chapter. We camped on their lawn with the other beleaguered hikers stumbling off the northern end of the roller coaster, and it was really fun! I learned a ton about AT history, and when we reached ATC headquarters today, I donated some dollaz and I am now a card-carrying member of the ATC! I got a patch AND a sticker! Beat that. 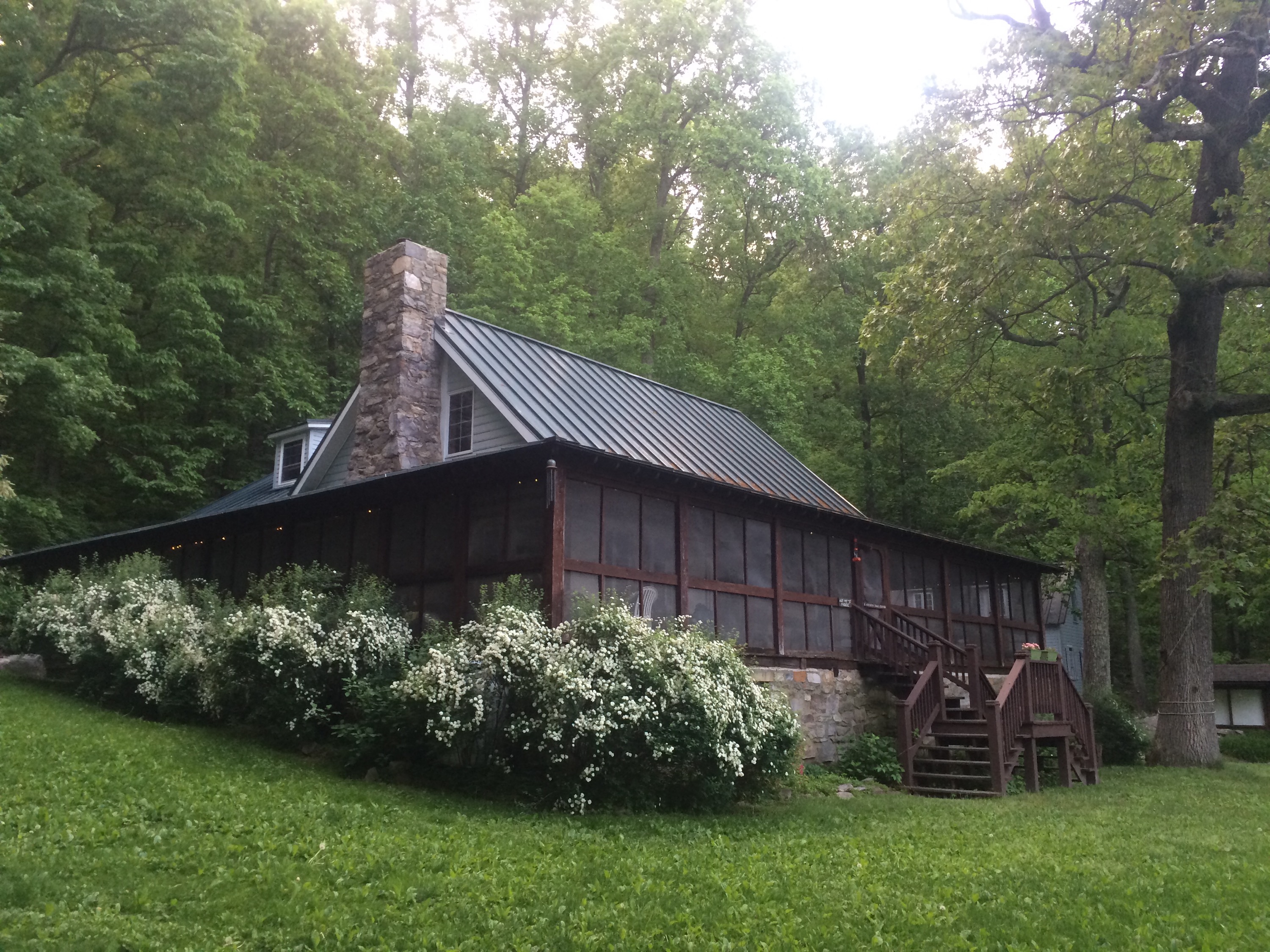 Blackburn AT Center. I have nothing witty to say

﻿So here we are in Harper’s Ferry for the night. I just took my first shower in 10 days and it was great. Harper’s Ferry looks like a Civil War reenactment town. I feel like everything should have Ye Olde in front of it. I was looking for AT postcards, but all I found were ones with Civil War generals and confederate flags on them. So my friends are getting postcards with Ye Olde Cannons and Ye Olde Rifles on them. 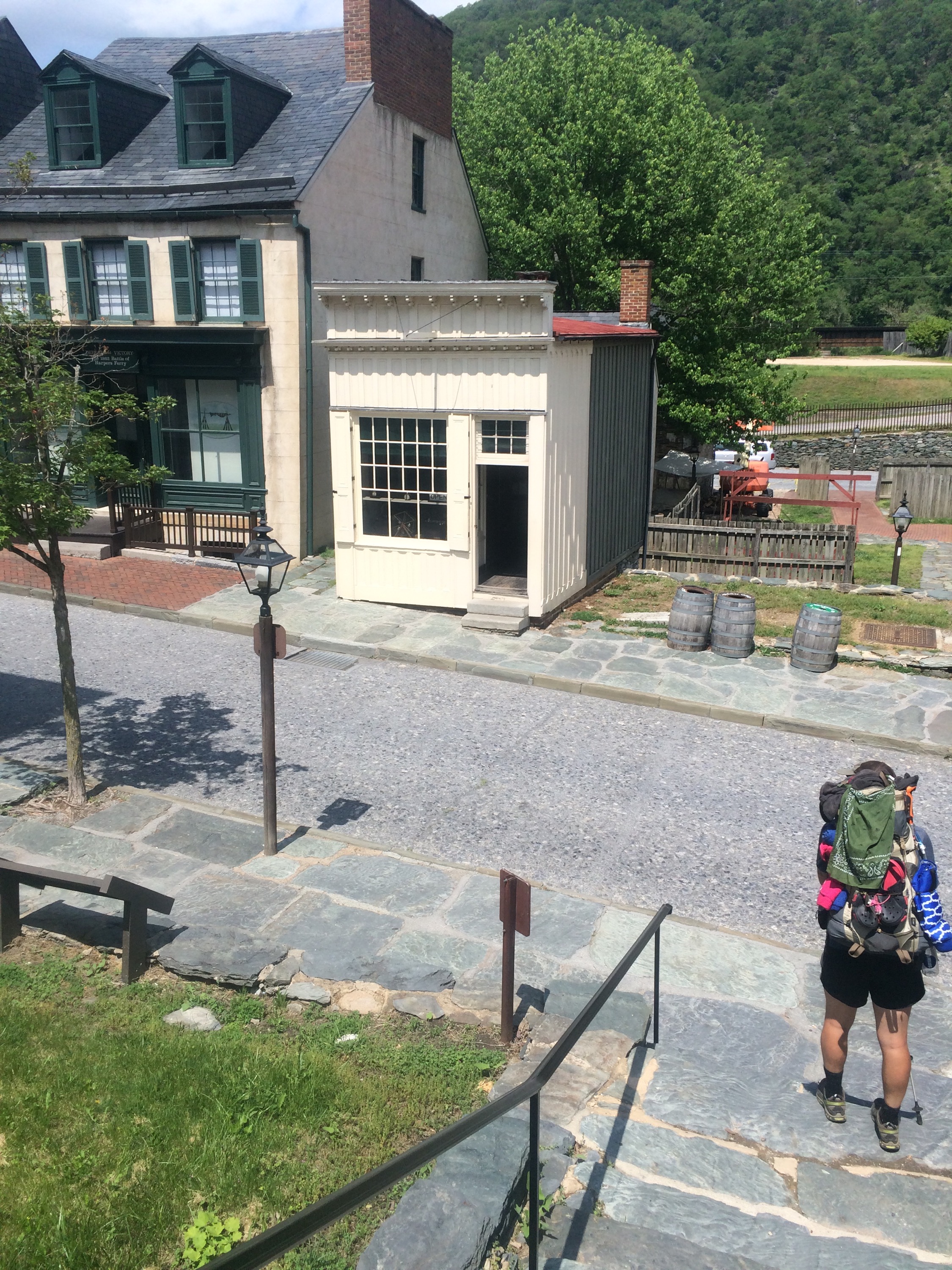 ﻿Ok, from the beginning now. After our grumpy-pants week leading up to Daleville, the trail has been filled with sunshine and butterflies. Seriously, lots of both. Oh, and poison ivy. Lots of that too. With the exception of evil vines brimming with rash-inducing poison, everything really has been dandy. I reset my brain and feel better than ever. I appreciate everything from getting water from a good stream flow, to a flat patch of ground for our tent. The trail has leafed out, the weather has been glorious, and I loved hiking through Virginia. We’ve seen everything from ridgelines to pastures full of cows, and there was this one cool section through Sky Meadows State Park that looked like a crazy lady’s overgrown garden. 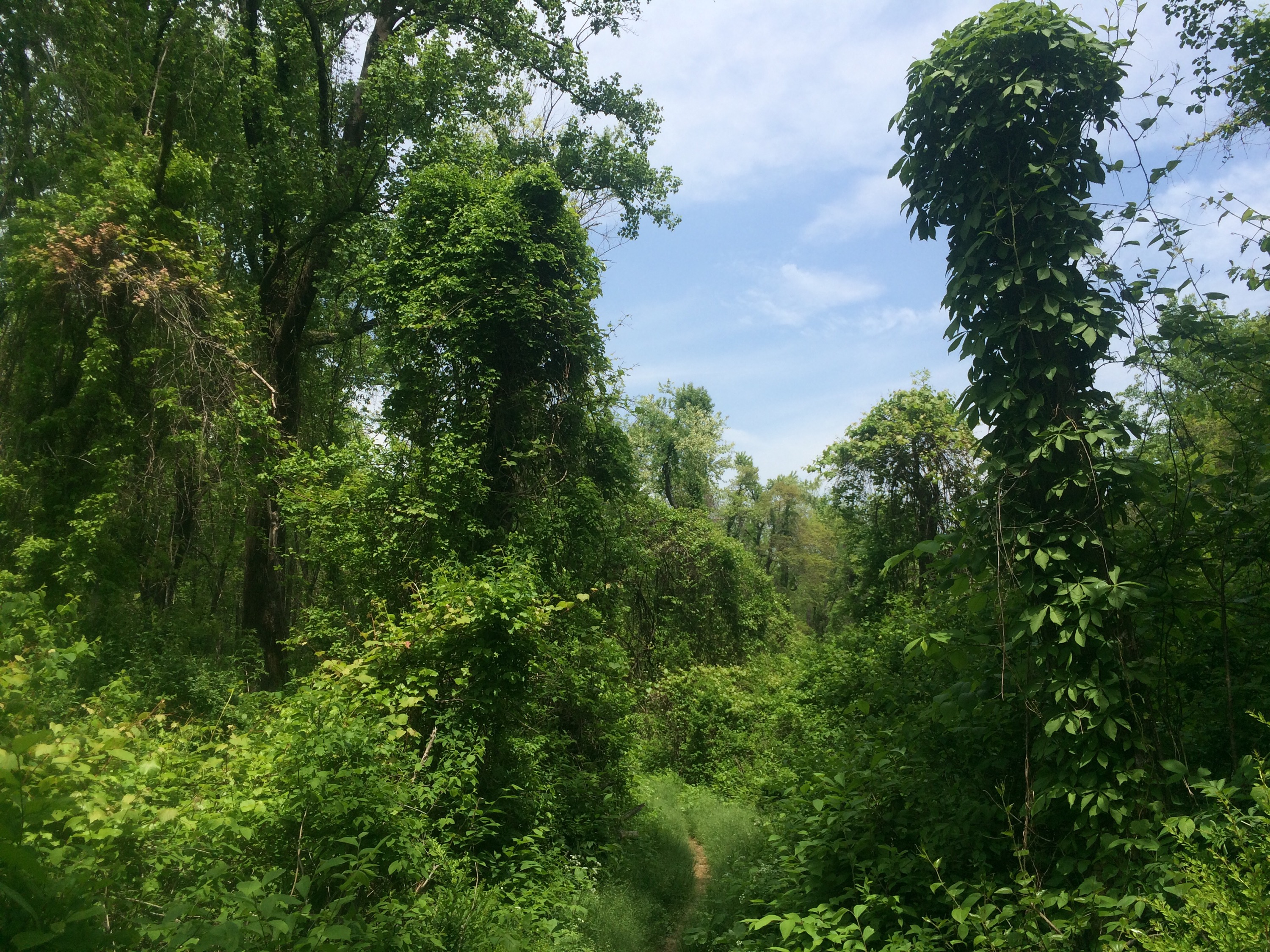 ﻿Once we were totally split from our former group, we splurged and stayed at Brierley Hill B&B in Lexington, VA. I figured it would be nice, but it was so beautiful and luxurious I felt like I had to apologize for my very existence. Owners Dave and Karen are pretty much the nicest people we’ve met. They didn’t bat an eye at our foul stench and filthy clothes. I strolled around the gardens and imagined I was a princess… a princess of dirt, but still a princess. 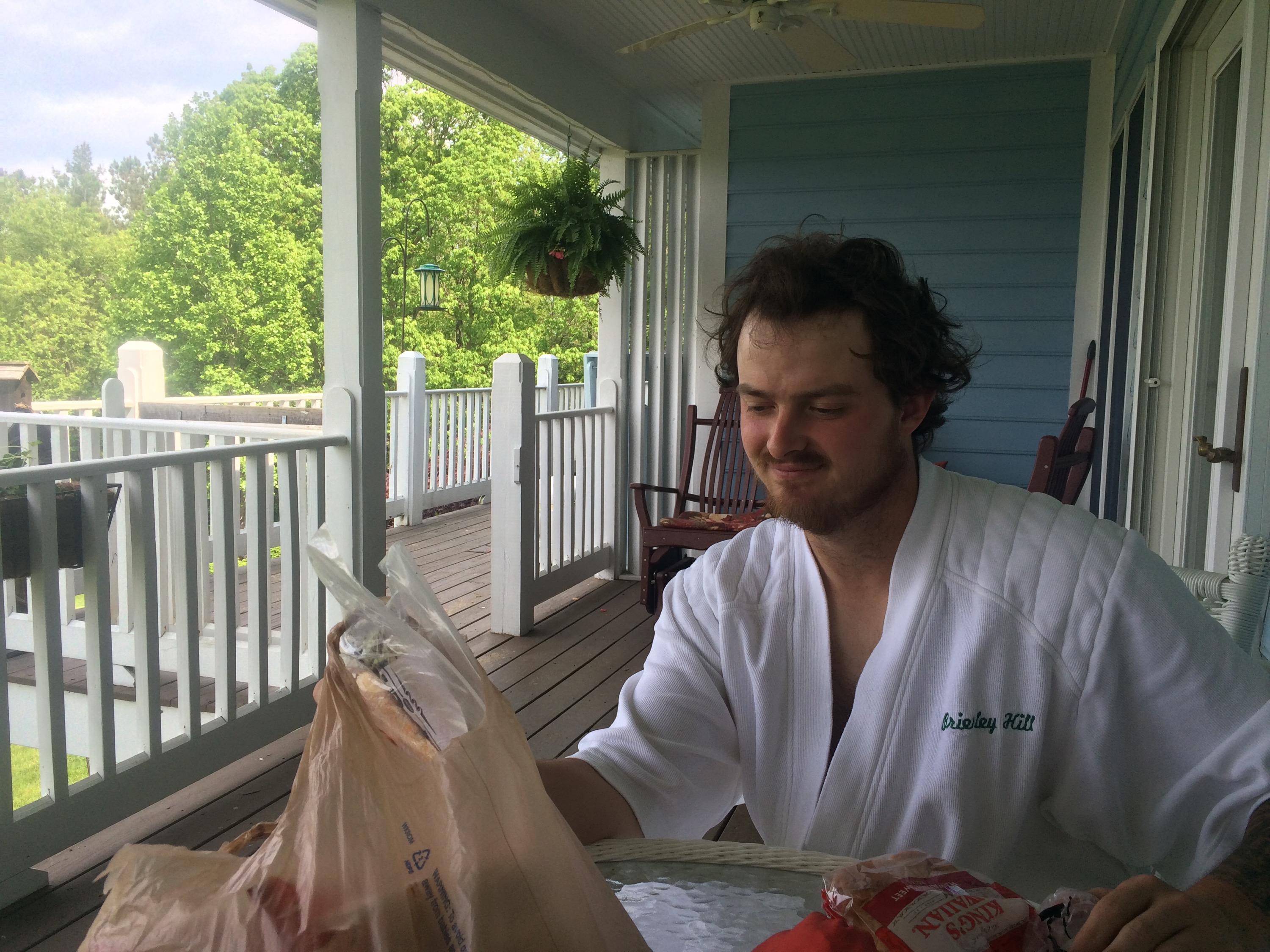 ﻿﻿Back on the trail, I was busy squealing at newts and gazing in rapture at trees, but Hare was having a major strugfest with his heels. We had a great night camping at Spy Rock, but it was followed by a tough day descending the Priest and immediately trudging up the loooong climb of Three Ridges in 80-degree heat. He was not a happy camper, but refused to admit that anything in particular was wrong. It was only when we were finishing an 18-mile day into Waynesboro that he admitted he needed to see a doctor about the bulbous lumps growing on his heels. Oh, ok. That makes more sense. 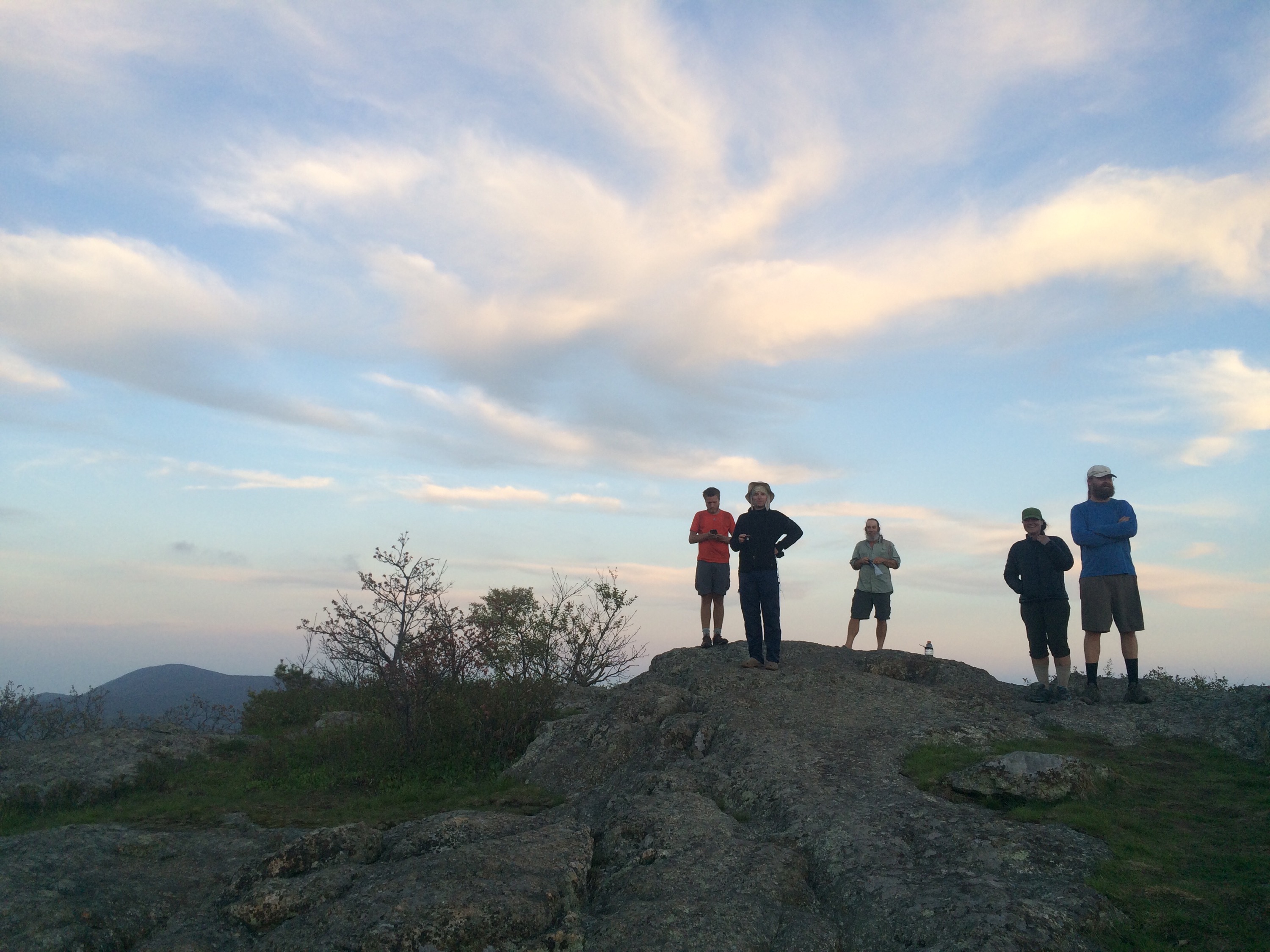 we watched the sunset from Spy Rock

﻿We took a zero in town and Hare got steroids (?!) for his heel spurs. The pain-free hiking has done wonders at restoring his jolliness. Also we ate at Mings, they were having a Mother’s Day special which was somehow $4 more than their regular buffet price. 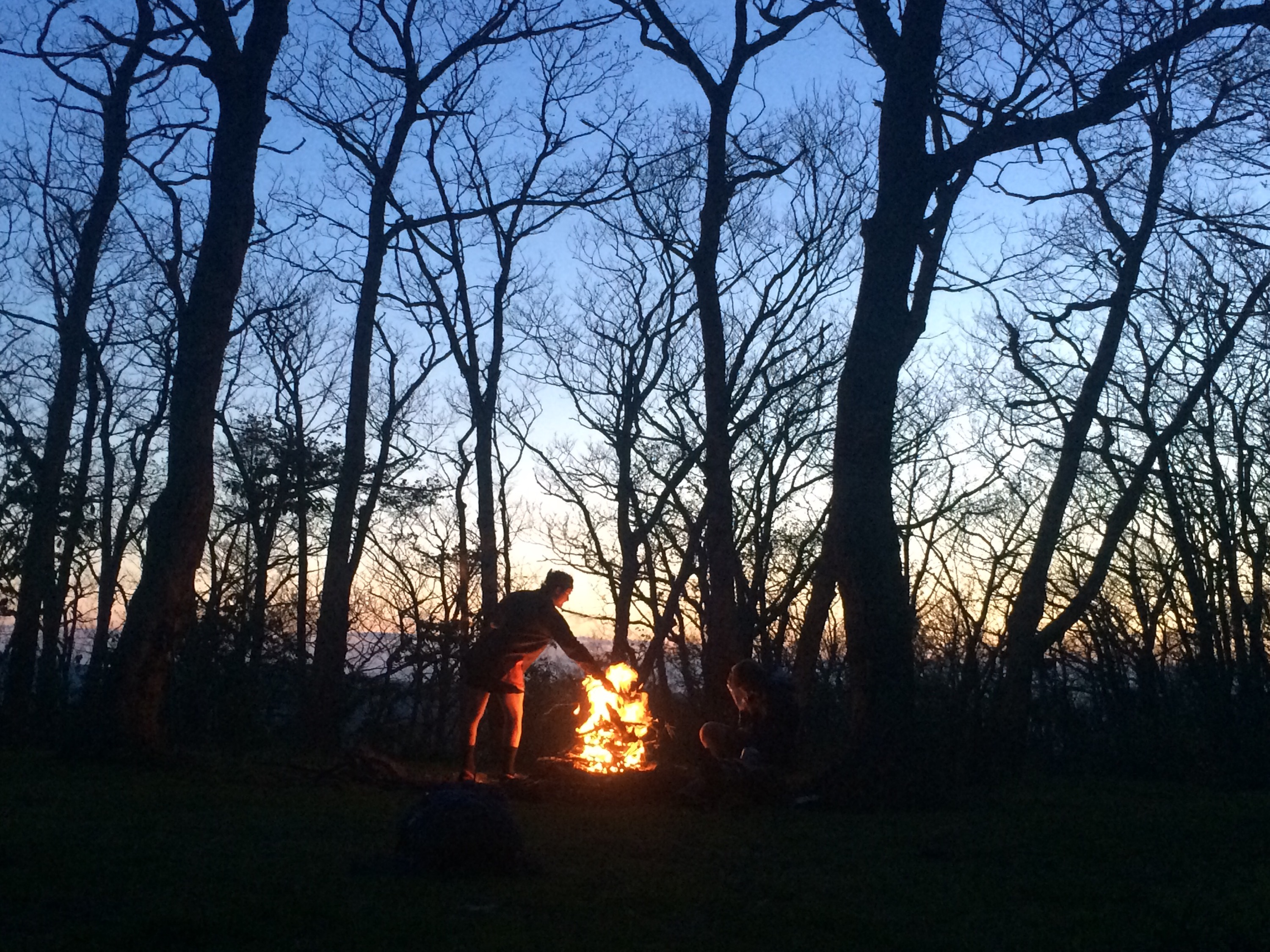 Hare has become the campfire whisper. He can create fire from wet rocks, seriously

﻿While we were in Waynesboro, we ran into Shadow, Long Stride, Franklin, and Hook. They were getting ready to take off on an aquablaze from Wayneboro to Harpers Ferry, something I had apparently agreed to do like, 400 miles ago. Hare really wanted to join in and canoe the 170 miles on the Shenendoah River, but sometime in the past 400 miles I discovered I really love the AT and really love hiking. So I didn’t want to aquablaze, but Hare pulled the whole “But you promised!” deal, so we compromised and did a 50-mile section over the next 2.5 days. 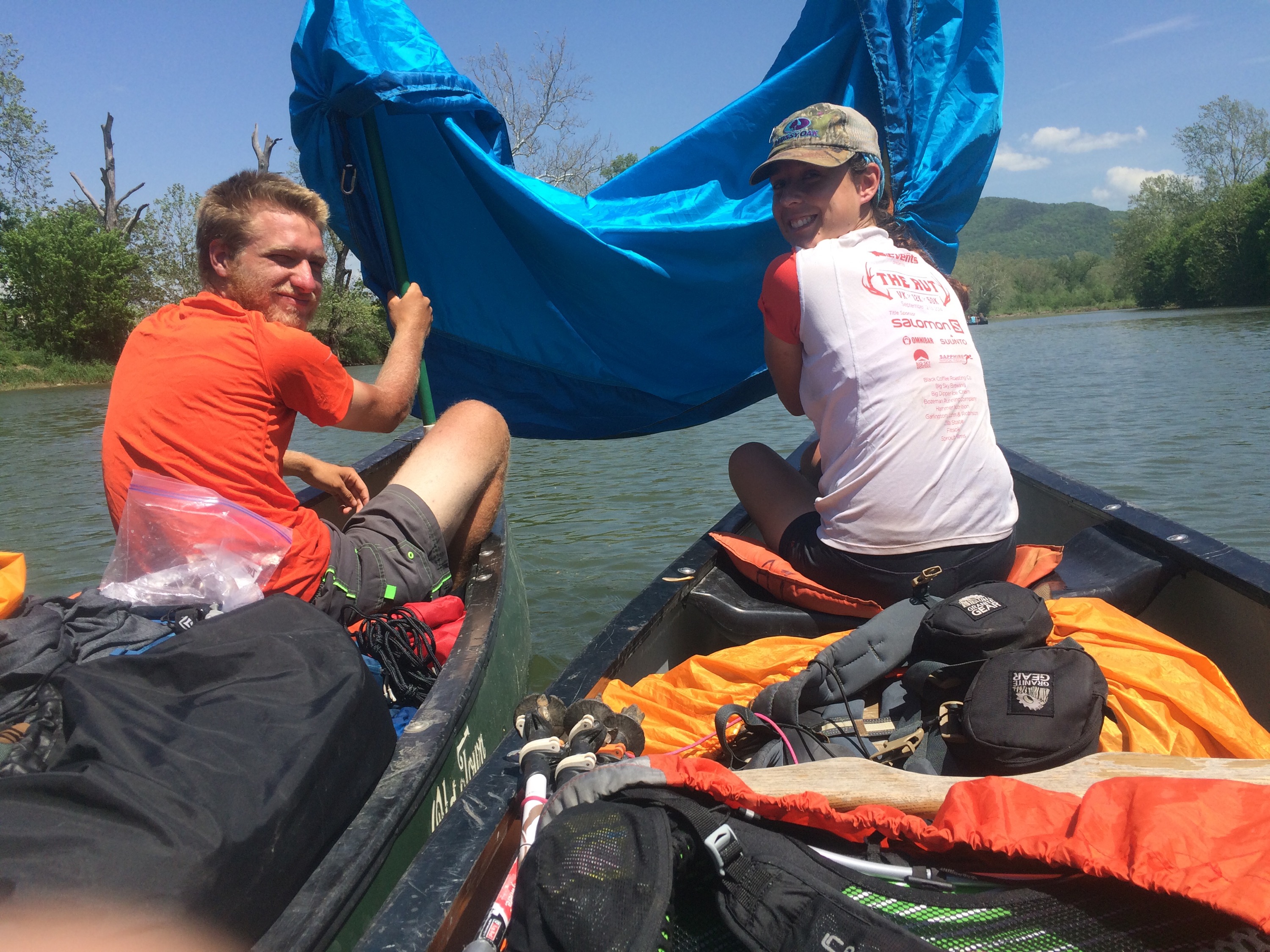 we tried to make a sail out of Shadow’s hammock. didn’t really work

﻿﻿It was really fun and I’m glad I did it, but I felt lazy as heck. Even though we canoed 25 miles the first day, paddling takes approximately 1% the effort that backpacking does. This might also have something to do with the fact that I have zero upper body strength, and Hare was Being A Man and doing most of the work.

We were surprised that the river was not actually parallel to the AT– it was headed in the same direction but about 10 miles to the west. So instead of canoeing through Shenendoah National Park, we were canoeing alongside farmland and under highway overpasses and stuff. 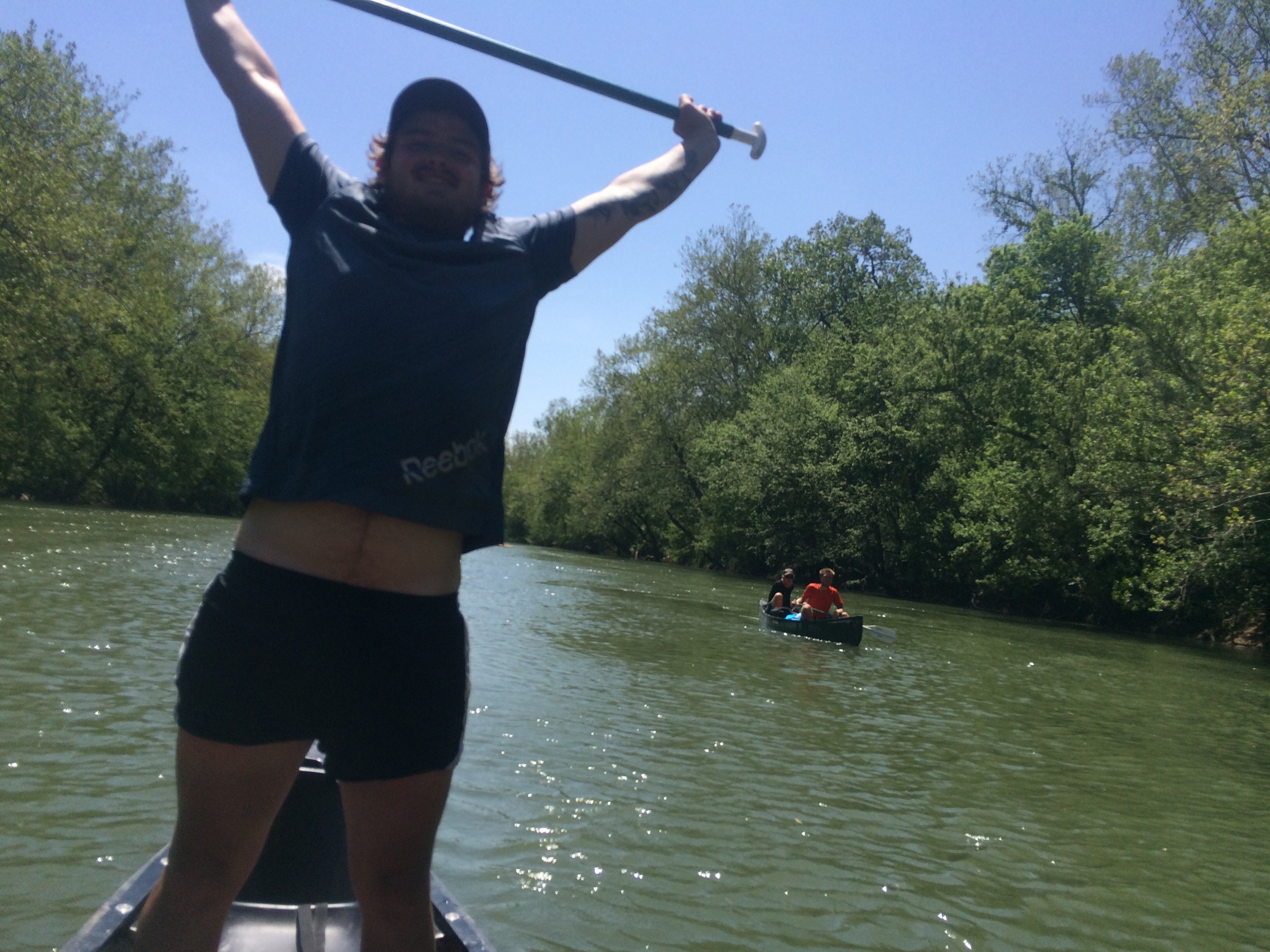 ﻿That group was hilarious. We became pirates and took over other people’s boats. And Hare dove off the side and swam right up on a water snake. It was hilarious. Glad it wasn’t me. We stayed at a riverside RV campground on the second night and had a weenie roast. I ate five hotdogs! 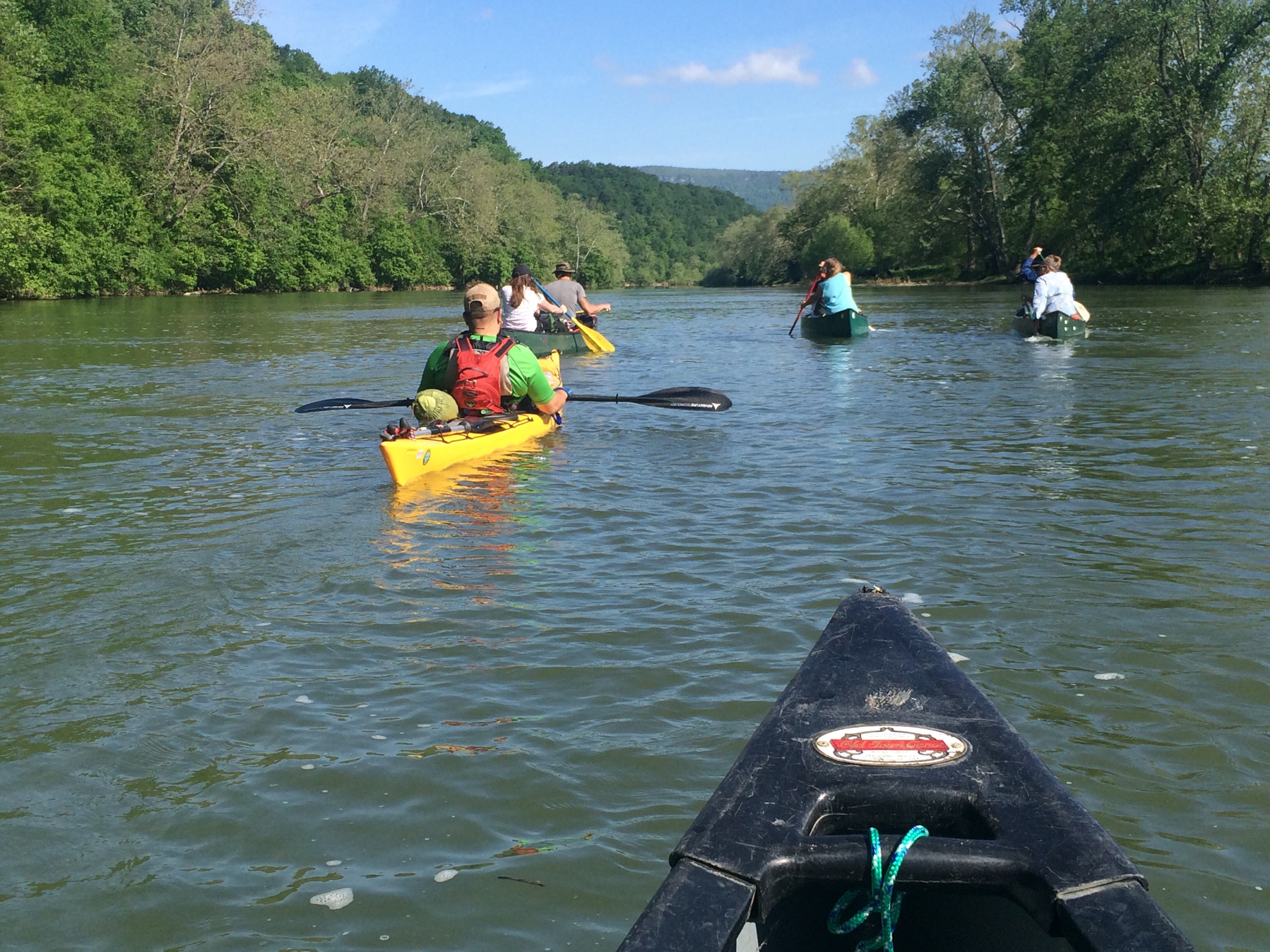 ﻿I was really glad to be back on the trail though. On the third day we canoed 9 miles to our takeout point and hitched a ride to the trail with a middle-aged Chinese lady who yelled at us that we didn’t wear enough sunscreen, we were stupid to be hitchhiking, we were probably going to quit the trail, and we should just go to Europe and take a train around. She was amazing. And terrifying. 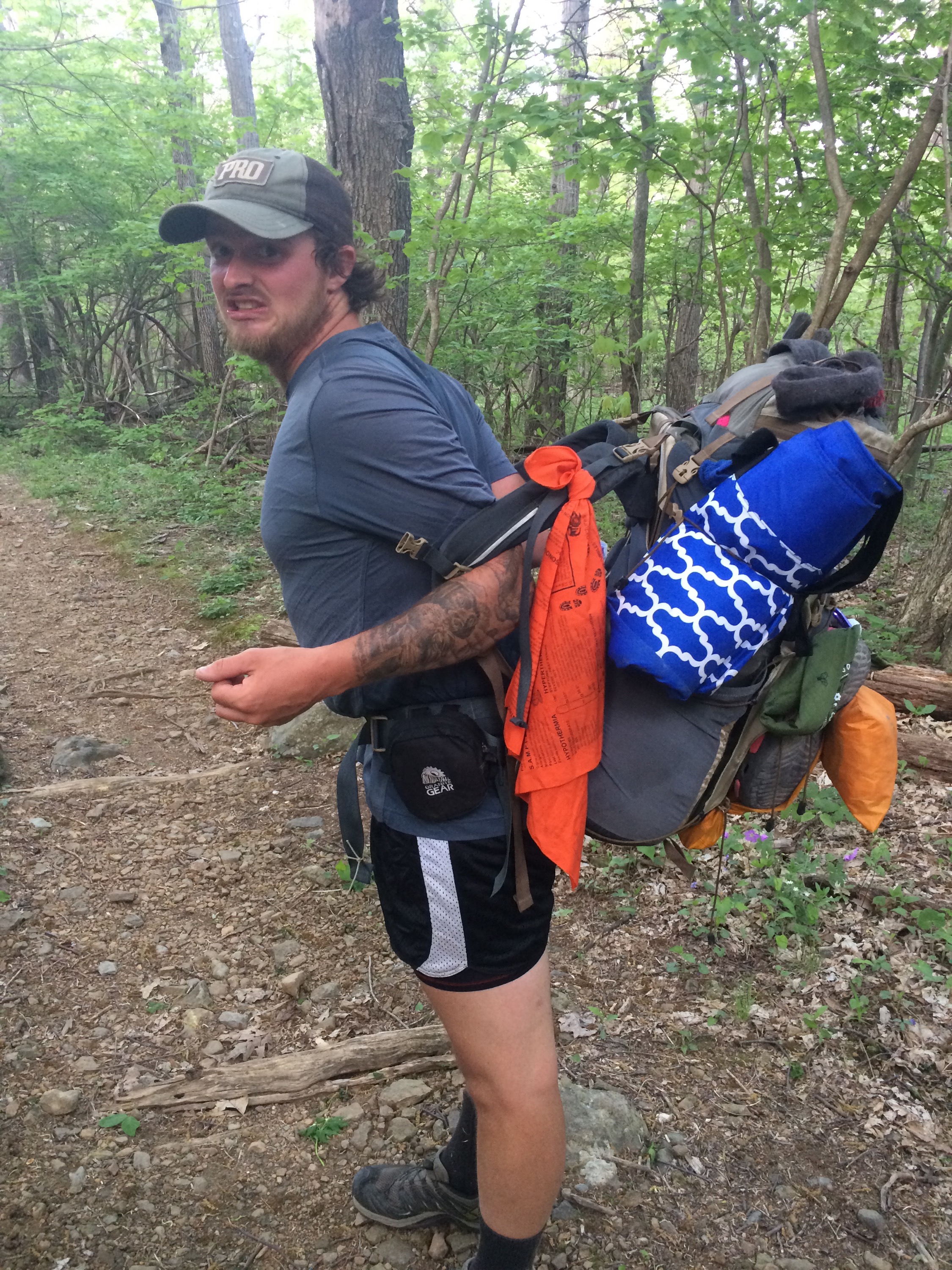 Tip: don’t get a sunburn on your back if you have to immediately hike 80 miles with a pack on

﻿We had two days in Shenendoah National Park after the aquablaze, and I was a little bummed to have missed a good chunk of the park, as I was really looking forward to hiking through it. But compromise, Maggie. Compromise.

We started kicking our own butts into gear after the lazy river adventure, and did our first Hero Day– where you hike to a road, hitch into town to get food and run errands, and then get back on the trail.

We hitched into Front Royal and got dropped off at a health food store, which has become a necessity as my GI tract is completely falling apart. 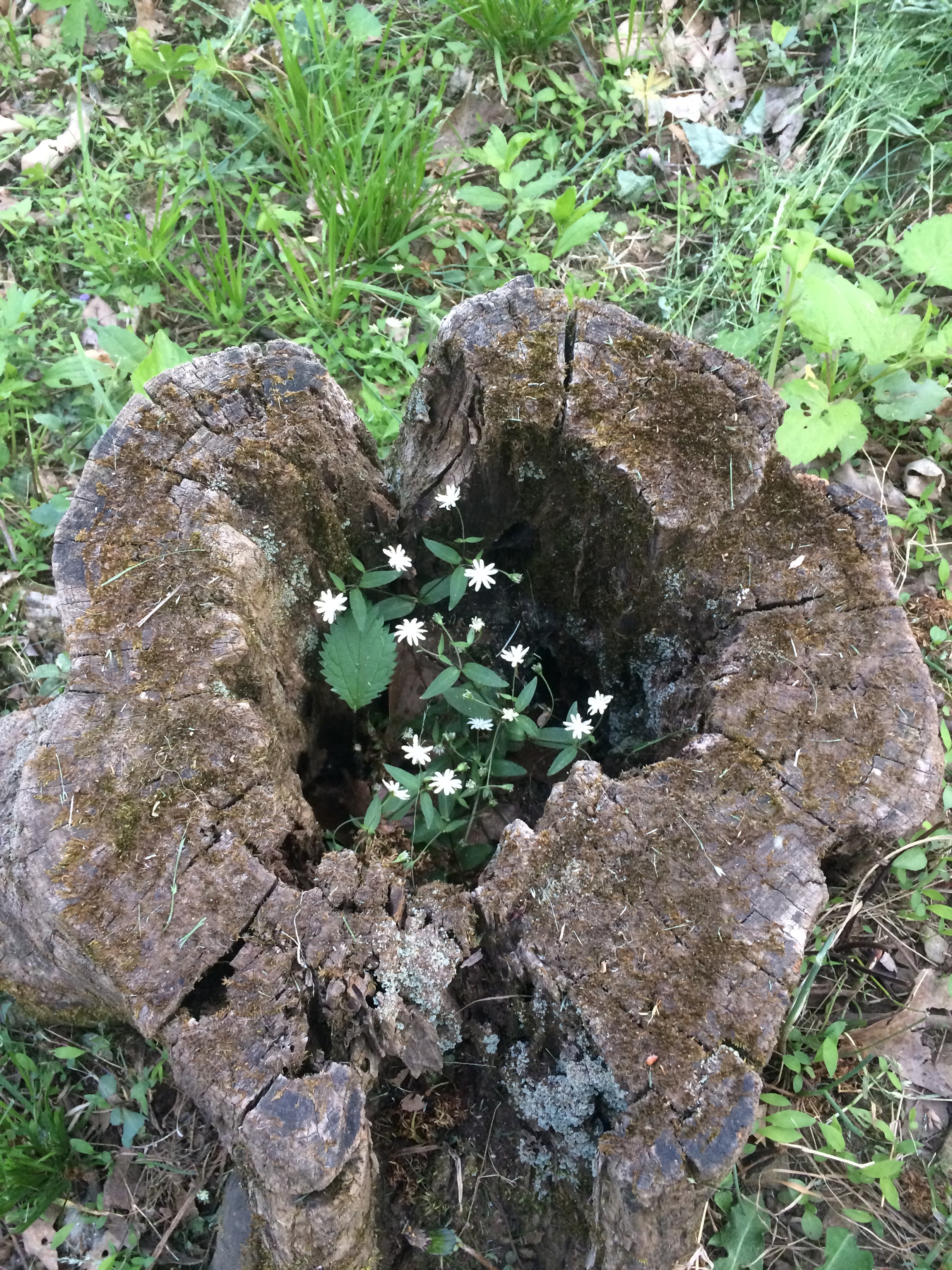 these precious flowers were growing in this stump. Pinterest poster’s dream

I was never the healthiest eater at home, so I figured living off Ramen and shrink-wrapped pastries wouldn’t be a problem. But seriously if I have to look at Little Debbie’s smug face as I unwrap a poison cupcake with an ingredient list straight from a biohazard lab, I’m going to eat tree bark for the rest of the trip. I wake up with heartburn every night, and I can’t stomach any of that chemically enhanced food anymore. So we got dates, dried apples, lentils, rice pilaf, and other stuff that won’t make my stomach eat itself. My favorite are puréed fruit pouches called GoGo Fruit. I think they’re for little kids’ lunchboxes, because my favorite kind is called Pedal Pedal Peach. It’s a great way to get fruit though! 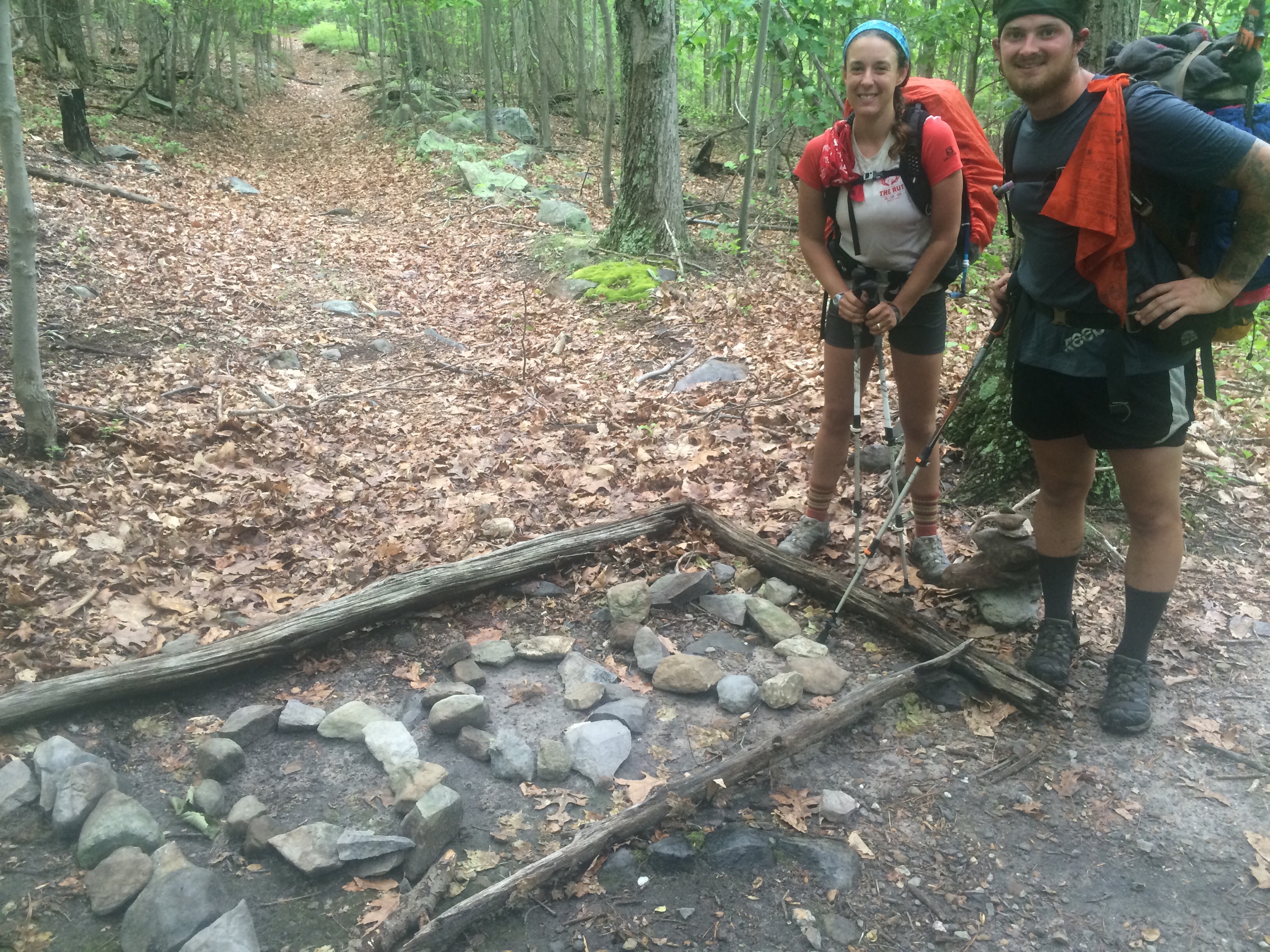 We cruised to Harper’s Ferry (made it past 1000 miles!!!) and getting our picture taken was totally surreal. I gave myself a little more than 25% chance of making it here, with my history of bad knees and a bad lower back. I can’t help it, I’m a worst-case-scenario person. But we both feel mentally and physically stable, and in 90 miles, we’ll be halfway to Katahdin.﻿﻿ 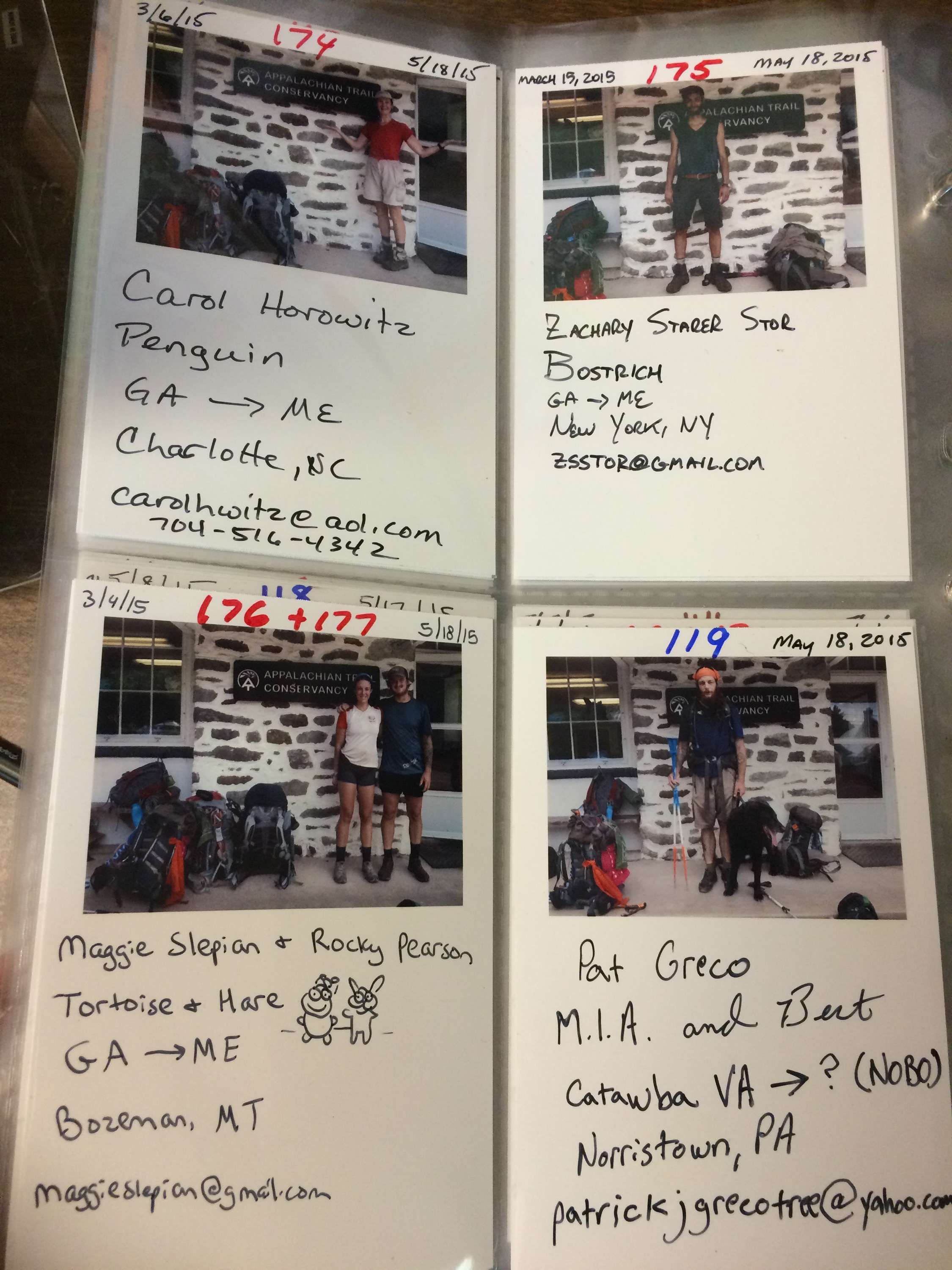 ﻿﻿Before I depart to go hunt down some ice cream from Ye Olde Ice Cream Shoppe, I heard there’s a class in Glendive, MT following along with our little trek. That’s so cool! So here is your big hello from Tortoise and Hare in West Virginia, and a few words of advice about the backpacking life from someone who has messed everything up at least once.

1) Stay in school. (That has little to do with backpacking, but I want your teacher to like me.)

2) Don’t compare yourself to other hikers. Or other people. Or anyone. Just do your own thing and be proud of yourself. This has been one of my biggest struggles on the trail, and I think I’m finally overcoming it.

3) Don’t be afraid to take risks. This can be as simple as trying a new type of Clif Bar or as big as leaving your life to hike 2,000 miles… for no other reason than you just feel like it. 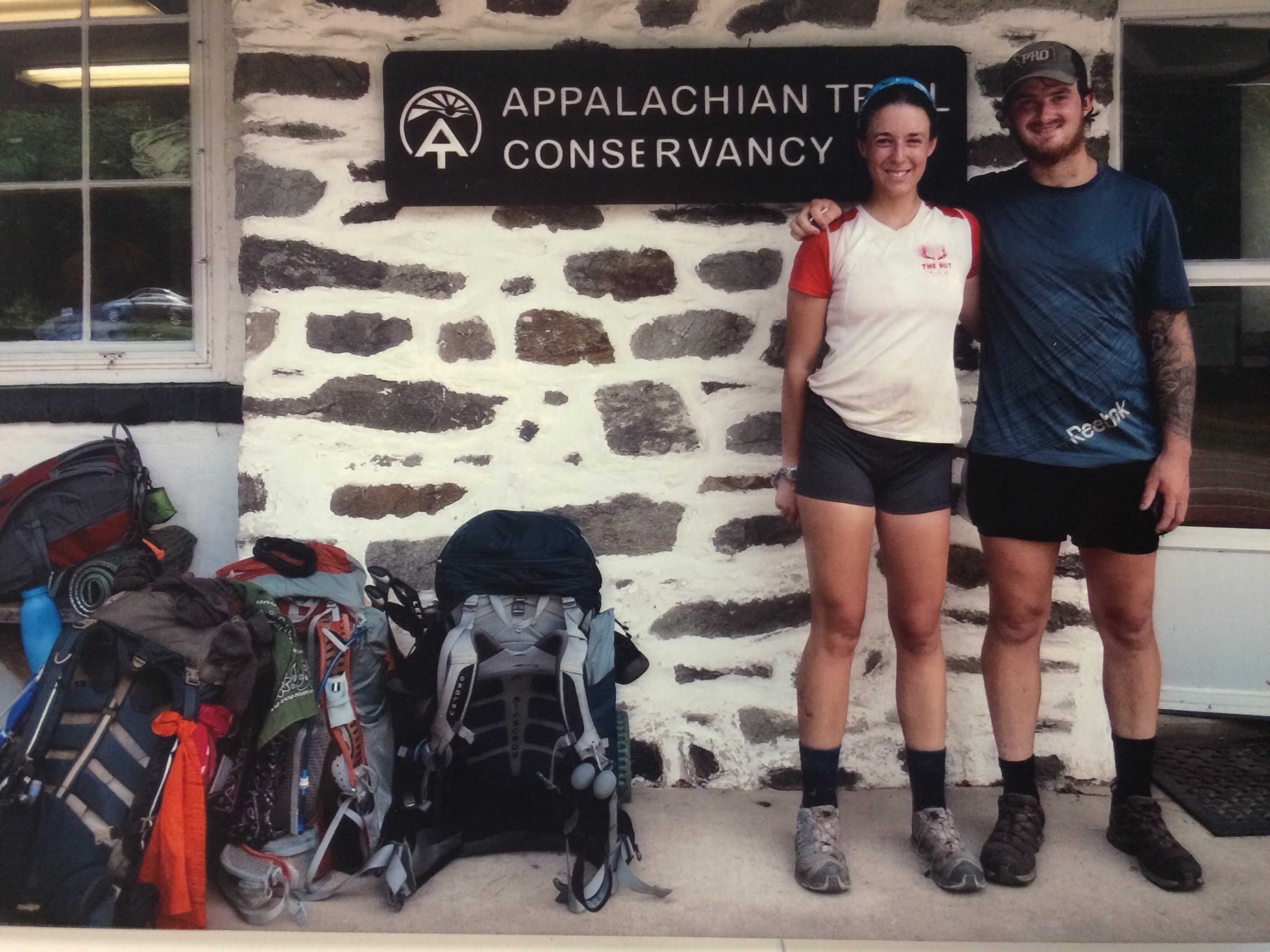 so excited to get this picture taken!

﻿Hope everyone is enjoying the emerging spring, we sure are. See you from the other side (of the halfway point).

Tortoise and Hare out.

Oh PS, our names are now totally interchangeable based on who’s having a faster/slower day. So I guess it’s more like Tortoise’N’Hare. One word. We’ll both answer.