It rained a couple times in the night, but not hard or for long. While I ate breakfast, I chatted with two thru-hikers. One I’d met before and the other was an older guy named Striker. He is from Massachusetts and did a couple shake-down hikes with REI pre-trail.

The morning was fairly flat for the AT, crossing a lot of small streams on wooden planks. I ate lunch at the next shelter, joined by Striker. He was aiming for his longest day and asked if he could tag along with me for the afternoon. I said sure. We hiked together for around six miles, then I got too far ahead.

A large wood bridge spanned the Laurel Fork River. I ran into a solo day hiker who said he sat by the water for hours and then drank out of it with his LifeStraw. He seemed entirely blissed out by nature and I understood. The trail went through two neat clefts in rocky walls, then descended to the impressive tumbling wall of Laurel Fork Falls. I ran into another day hiker named Hitch. He had hiked large portions of the trail and gave me a couple tips. 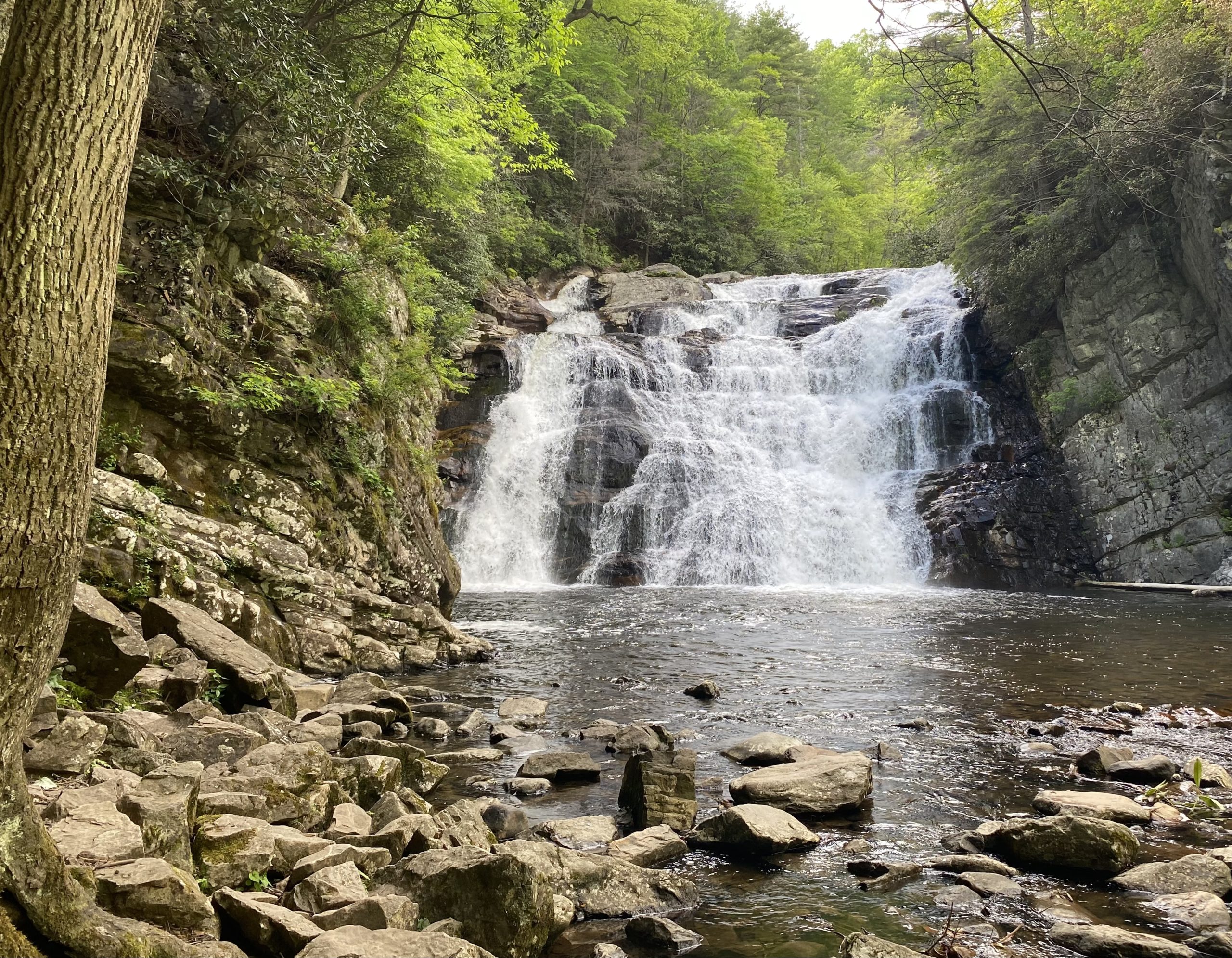 Laurel Fork shelter was empty when I arrived. A small cascade nearby served as the shelter water source. I found a salamander family, three big and one small, hanging out in the shallow wash of water over a big rock. I was so excited!! They looked almost fake with their big black eyes and rubbery-looking bodies. I watched them for a while. As I returned from filtering, Striker was walking that way. Yay, he set a new mileage record! We were soon joined by a guy named Sonic Boom, from Seattle. I had a lot of fun talking with him about food and trails. 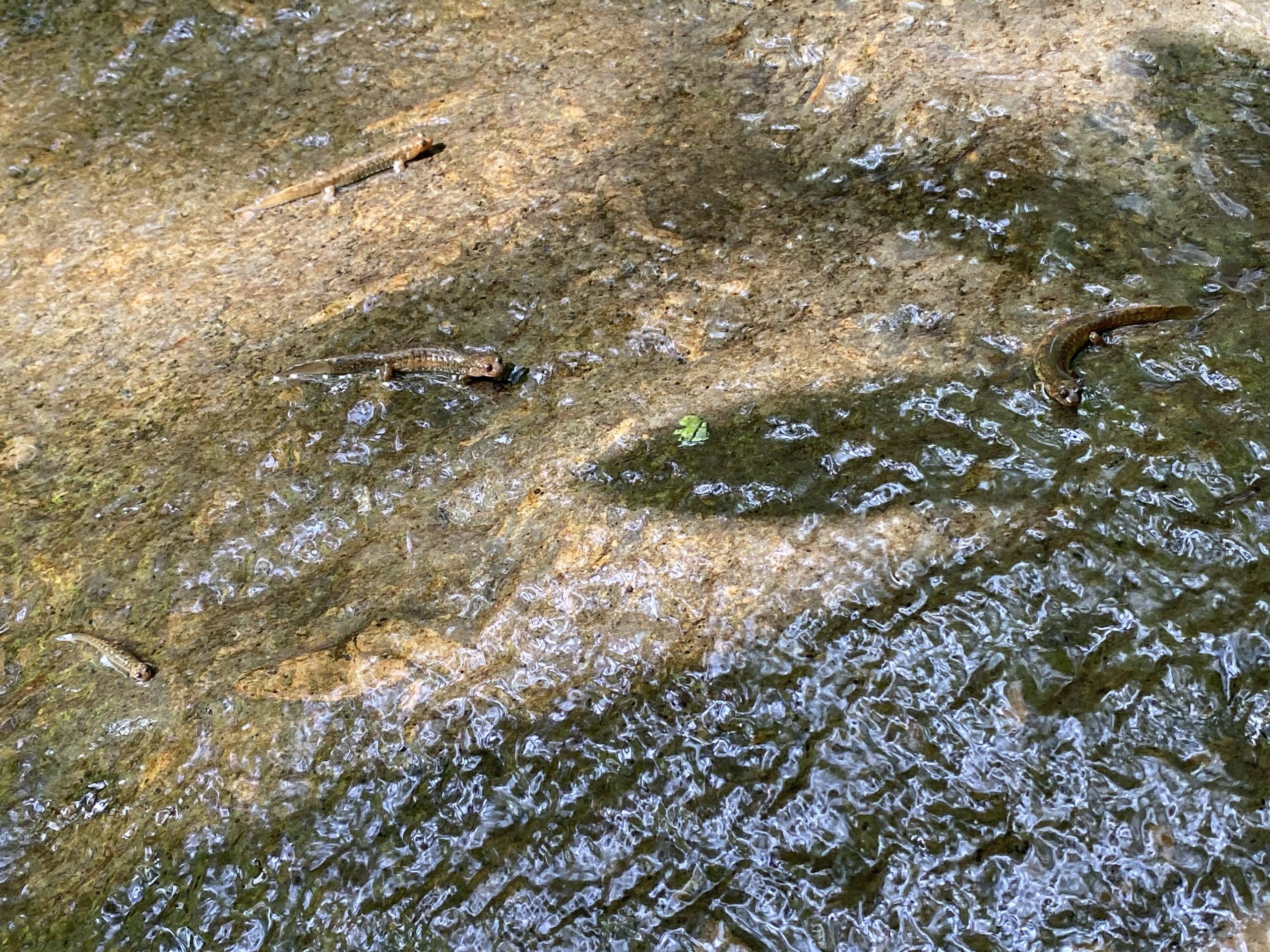 The three of us woke early. Sonic Boom shared almond butter powder, which I added to my overnight oats. It was my earliest start yet. Striker and I hiked together again, crossing a couple elaborate footbridges over a stream. Then the trail went up 1,700 ft. to the top of Pond Mountain and right back down the same amount. A silly mountain as there wasn’t even a view at the top.

We stopped at Boots Off Hostel. Striker to stay the night and me to get food and charge devices. As I prepared to leave, a woman getting off trail gave me a fuel canister that she had only used once. I was grateful; mine was getting low.

The trail wound around Watauga Lake and then over Watauga Dam. It was fairly flat but soon began ascending the ridge of Iron Mountain. There I ran into unexpected trail magic! A couple named Ben & Heather Williams, who were funded by their church. They cooked bacon double cheeseburgers to the delight of many. I opted for yogurt, juice, and chips. They were a sweet couple and we chatted as I ate. 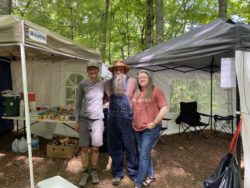 In the late afternoon, I got into a funk. There is a big AT festival, largely a party, called Trail Days. I came out here to be in nature so I avoided it. The trail is emptier than usual and most days I enjoy the solitude. However, not attending Trail Days puts me further from the friends with whom I was hiking. Though I prefer hiking alone, I enjoy meeting others at lunch and especially in the evening. My mood dipped as I doubted my decision to avoid the event and wondered if I will find new friends.

As dusk approached, I chose a peaceful wooded spot along the ridge for my tent. I finally got to camp solo! As I lay down in my tent with moonlight shining inside, forest noises all around, I felt gratitude and peace with my decision.

I slept well! While still snug in my bag, I heard “good morning” repeated over and over. Someone’s alarm? Nope, a bird whose call my brain turned into the words. After breakfast, I played Pokémon Go. It was a lazy enough morning that the three section hikers and a thru-hiking couple from the shelter 1.5 miles back all passed by. They remarked on my lovely campsite.

The ridge made for pleasant hiking. I ran into Dan, one of the section hikers. He had an external frame pack and brand new water filter, but though new to backpacking he aspired to hike Hadrian’s Wall in England. I liked his enthusiasm. At the next spring, I ran into the other two section hikers. We talked about water filters and backpacks.

An hour or so later I stopped to put on my sunglasses and heard a polite rattling noise. I looked right to see a gorgeous rattlesnake. It let me follow it for a bit, rattling every now and then until I got a good picture. Batman & Robin weren’t far ahead and they had also seen the snake. We exchanged photos. 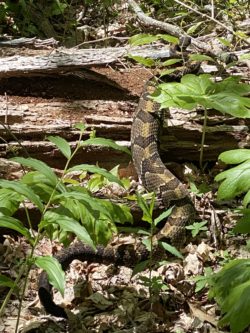 In the afternoon my favorite trail portion was through the dandelion dotted fields of Old Osborne farm. It was bucolic and the old outbuildings reminded me of a certain Montana ranch. Once back in the woods I put on 80s music and cruised along at a good pace. My original goal was a shelter, but I ended up camping solo in a gap. Sunset was an hour away and I had plenty of water to dry camp.

I started my day eager to reach Damascus. The 13 miles flew by, most of it wooded terrain.  When I was 3.5 miles away from town, I encountered the Tennessee/ Virginia state line. Yay, a new state and three states behind me! Not too long after, I went down a blue-blazed side trail to get water and discovered a salamander, orange with orange spots! It’s exciting to see so many salamander varieties! The sky poured rain on me while I filtered water, but it didn’t last long so I didn’t mind. 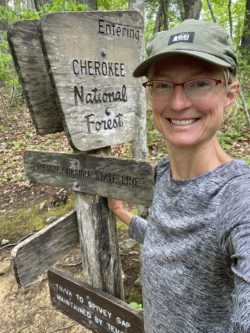 Like in Hot Springs, the trail travels through the town of Damascus. First as a gravel path across the town park and then down the main avenue. I stopped at the post office to get my resupply box. Then I headed to The Place, a hostel run by the Methodist Church. It was first come, first serve, and I was slightly early so I rummaged through my resupply box. My parents snuck in a couple fun size candy treats. Thanks mom & dad!

The hostel was a great deal: a towel, hot shower, and bunk for $10 a night. There were also a bunch of free snacks left from Trail Days. Bayou, the caretaker, walked the AT back in 2001, when there weren’t many hostels. Now he said there might be more hostels then shelters. I wanted a big dinner, especially pizza or nachos, but couldn’t find a good restaurant option. The solution: I got nacho fixings from Dollar General and heated them in the hostel microwave. Delicious!

There were four other thru hikers staying in the hostel and I knew three of them. Forest and Sobo both hiked the PCT so they are fast; I was surprised to see them. Sobo also did the Colorado Trail, but in a different year. We compared experiences. At 10 pm Bayou ushered us all to bed. I appreciate a hostel having quiet hours.

I had a leisurely morning: ate leftover nachos, called my parents, hunted Pokémon. When I made my way by the outdoor store, I ran into Batman & Robin. I told Batman about the orange salamander and he said it was a newt. (Though its tail, feet, and skin did not have newt characteristics.) Robin gave me a hug and said she hopes to see me down the trail.

For 300 yards on the way out of town the AT shared the Virginia Creeper Trail. It is an old railroad bed that was paved and is now used as a bike trail. Afterwards there were a couple climbs with a road and creek in between. I sat beside the creek and enjoyed my quinoa & lentil lunch. The second climb was accentuated by the gorgeous purple blooms of countless rhododendron bushes. 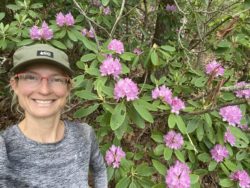 I didn’t sleep well last night. That seems to happen away from the trail. There is clean-up, resupply, errands, checking emails…. plus hanging out and eating food. It goes quick and what I don’t finish I think about. Therefore I made it a short day and stopped at Saunders shelter. The camping was great, flat spots covered in pine needles below tall trees. I got to bed early.