A favorite island aunty suggested I study with the hula hālau (school) where she danced for decades. She didn’t say I would be in the children’s class.

I arrived at the community hall to discover I was 25 years older than my classmates. At 5 feet, 11 inches, I towered above the girls in the front rows. We were instructed on the duck walk—an extremely low walk on bended knees where one creeps elegantly across the floor. My first challenge was to get down to the ground with poise. As I toppled over, my aunty said to the audience of watchful moms, “Well. She’s just so tall.”

Humbled by the difficulty of the movements, I traveled to Hāna, a small community nestled into the back side of Maui, to learn more. I took my place in a circle of students, and a drumbeat began. A dancer stood powerful and strong at the center of the room. My body registered the beat and began to sway, but she remained motionless, waiting. “Kāholo,” said the teacher, in a quiet voice that belied the strength of the instruction. Bending low at the knees, the artist’s feet began to move, pushing her hips back and forth in rhythm to the drumming tapped out by the teacher’s hands. Her movement was a dynamic combination of power and elegance. At each new command, her response changed. 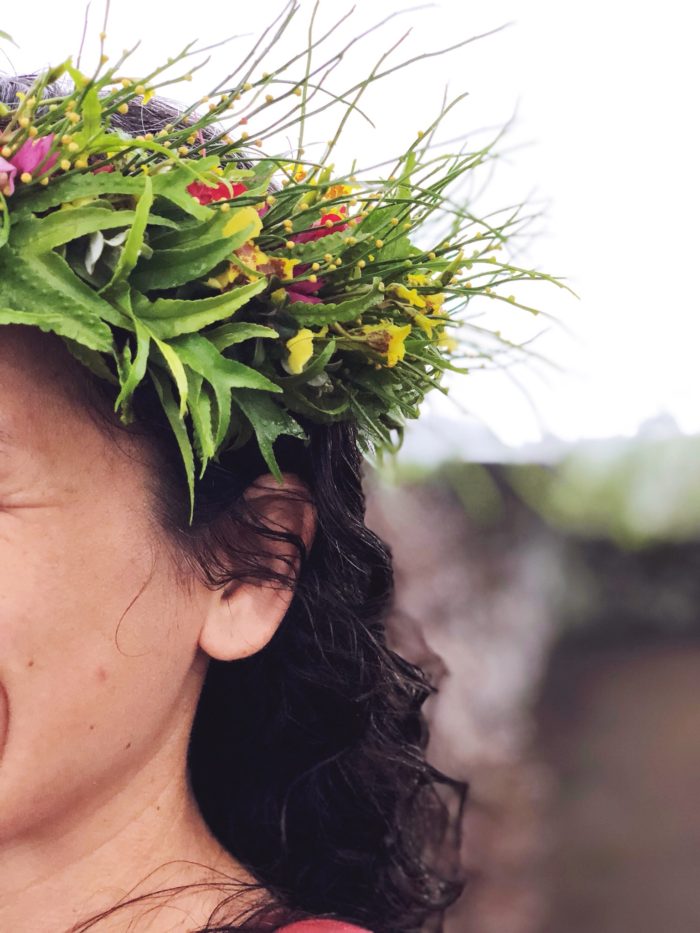 The lively movements unfolded with masterful skill, changing the energy in the room. The gathering of students grew very still. It felt like my heartbeat stopped, and was replaced by the steady thumping cadence of the drum. Dips and sways progressed to vigorous lunges and rhythmic backbends, and arms moved with precision. The progressive difficulty of the moves was concealed by a lifetime of practice, revealed only by the gradual sheen of sweat that began to appear on the performer’s skin.

The rhythm stopped and the dancer caught her breath.

My companion, Meredith, an ultradistance athlete, wanted to learn what motivated the effort we had just witnessed. What energetic well was tapped to propel the movements with such impressive commitment?

After a thoughtful pause, the hula practitioner replied: “My sweat is my ho’okupu.” A ho’okupu (ho.oh-koo-poo) is a gift, an expression of humble gratitude, and demonstration of a desire to give the best of oneself. It acknowledges human connection within the natural world and a desire to grow. Typically gathered from nature, a ho’okupu is a symbolic and simple item with complex meaning. “My sweat is the most sacred thing I can give. It’s part of myself.”

From Hula to Hiking

As a hiker, effort and humility are a familiar combination. A movie of my most challenging hiking moments played in my mind: my first 2,000-foot climb wearing a 35-pound pack, boulder hopping two miles with legs shaking down a gushing river after a rugged descent, crawling on all fours through a tropical tunnel of green, bushwhacking and inching forward along an antiquated trail. Shaky muscles and a sweaty trail body highlighted my naturalness. 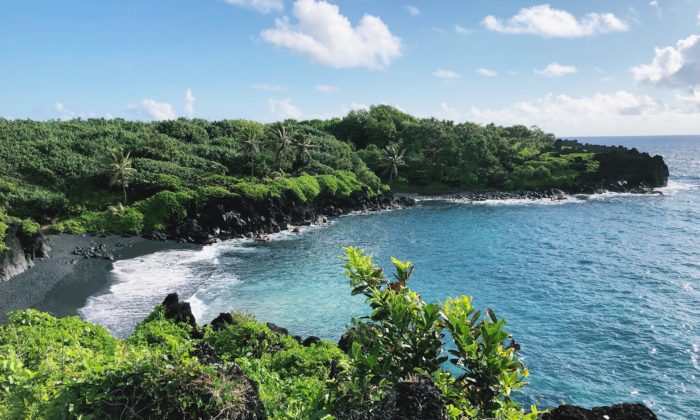 The next morning, the sun dumped golden rays onto the ocean as I hiked the King’s Trail at Wai‘anapanapa State Park, a footpath for royal messengers that once circumnavigated Maui. The black lava trail was misted in sea spray from Wai’ānapanapa to Hāna Bay. Round river rock stepping stones marked the trail as far as I could see. I took them with rhythmic stride, and remembered the hula expert’s movements and intention, so different from motivational messages I’d heard before.

Hikers described the experience of trekking as a conquest—“conquering a mountain”—as if we humans stand at the top of nature’s hierarchy. Cyclist Jens Voight famously commanded his body, “Shut up legs,” smack-talking the very body he pushed to perform. Motivational speaker Les Brown was an antagonist: “The harder the battle, the sweeter the victory.” With whom are we at war?

I came to study the art of dancing hula. Instead, I discovered a breakthrough idea to enrich my toughest days as a thru-hiker. Typical pump-you-up language acknowledges the commitment and effort of a rigorous undertaking, yet doesn’t honor our part of an essential whole. Surrounded by a culture of me vs. world cheerleading, I had unknowingly limited my opportunity to thrive by positioning myself as separate from, and even above, the natural world.

Farther down the King’s Trail, I reached maximum effort and wondered about my body’s capability. I quickened my pace, leaped from stone to stone, and felt the wind wick a damp luster from my body. “My sweat is my ho’okupu,” I offered, and pushed on.

How do you manage the mental challenge of thru-hiking? 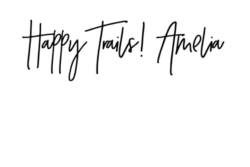 From Hawai‘i to the Appalachian Trail, starting February 2020. It’s a journey that began when I traded climbing the corporate ladder for climbing mountains. My greatest a-ha’s come from uncovering my limiting beliefs and exploring the world. I’m interested in the infinite possibility of potential - alone, and as part of a couple, hiking together.