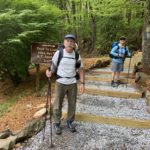 It was just a short hike downhill to NOC, where we stayed the night in a double bunk room the size of a small chicken coop with an air conditioner.  We were having a “NERO,” a near zero day.  Kinder drove out from Blairsville GA to meet us. We had a great brunch and fried fish dinner with her at the restaurant overlooking the Nantahala River.  It was great fun to watch the kayakers and fly fishermen in the river.  We met “Junco,” who was a birder and completed an AT thru-hike several years earlier.  We exchanged some of our surplus food with him for a small gas container for our Jet Boil.  He confirmed some of our bird call identifications – the sort of “pleased, pleased, pleased to meet ya” with missing syllables was indeed a hooded warbler, and the blue-headed vireo (like a red-eyed vireo, but louder, with more spaced-out phrasing, sounding more like R2D2). The outfitter had a number of field guidebooks and complete hiking and kayaking gear.  They were able to fix a fellow hiker’s Nemo sleeping pad at no cost – nice and knowledgeable folks. 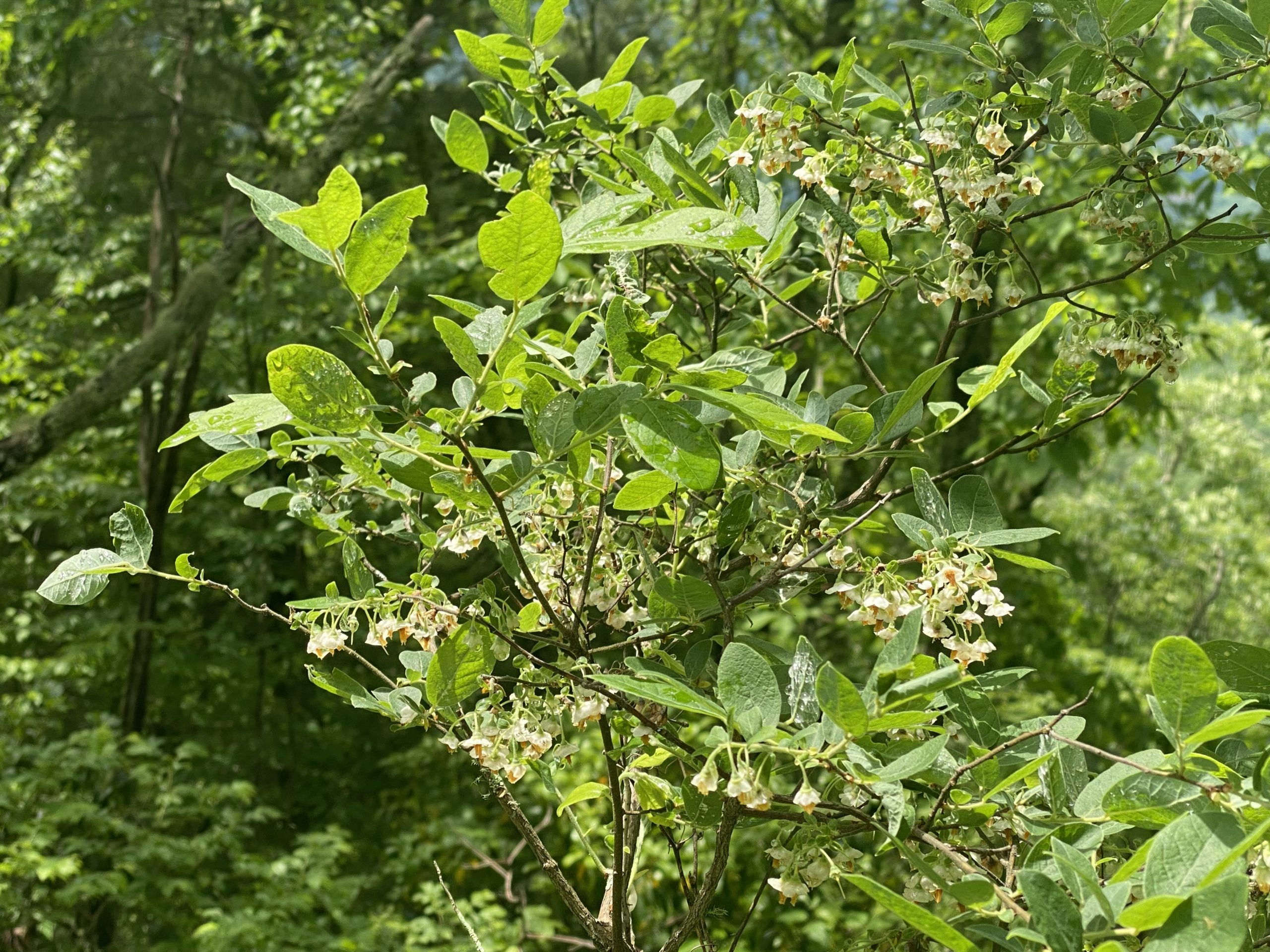 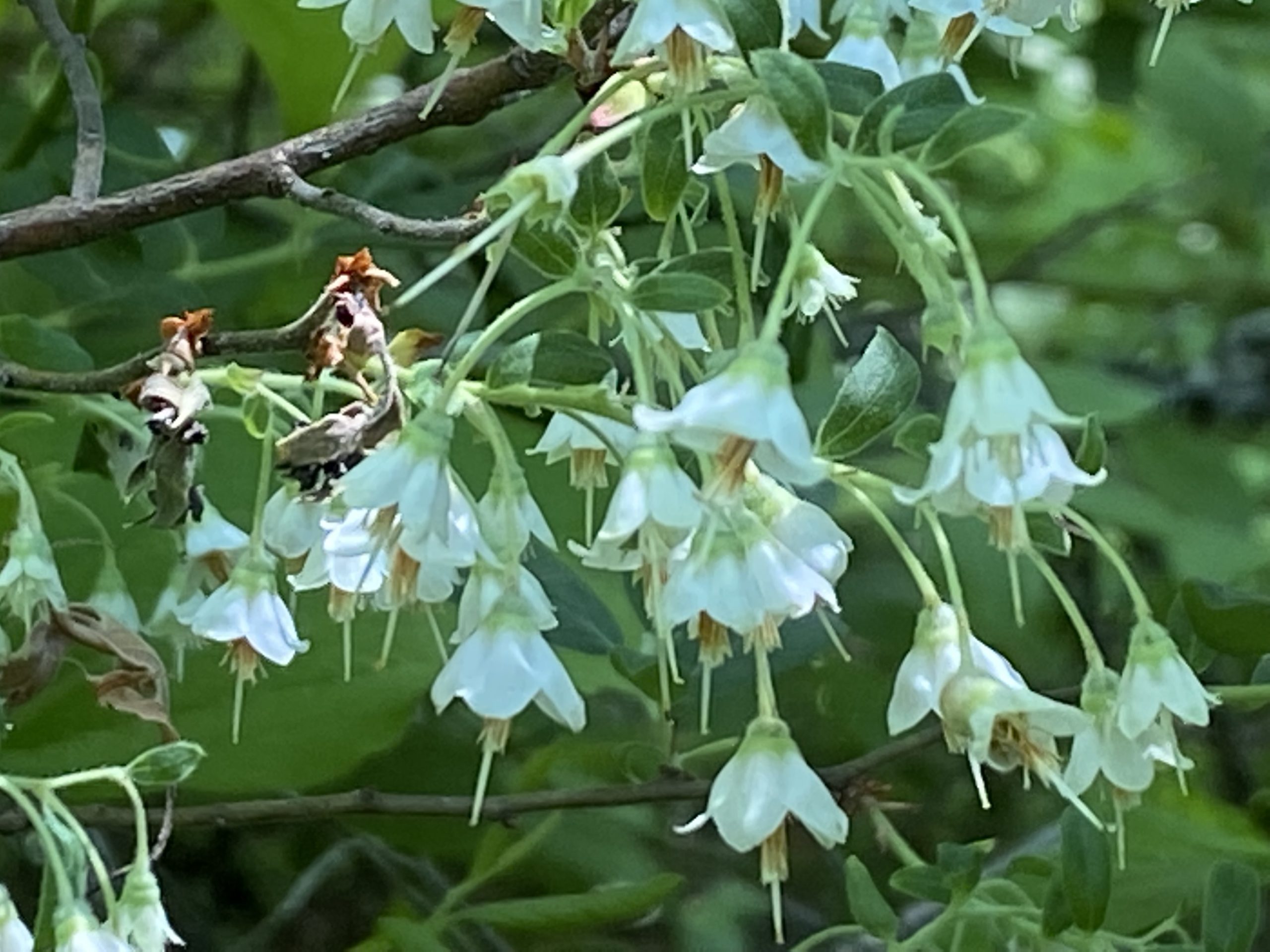 Deerberry is a native deciduous loosely-branched shrub that is found throughout the eastern US, but especially in the southeast.  It usually grows to be about five feet tall, but can grow as high as ten feet. It grows on acid, well-drained rocky soils in forest areas with dappled shade.  Deerberry is pollinated by bees.  Deer eagerly eat the purplish fruit when it comes out mid-summer to early fall as well as the twigs and leaves, and the fruit is also eaten by many other mammals and birds. For people, the fruit of this blueberry relative is quite sour, but edible if cooked and sweetened. 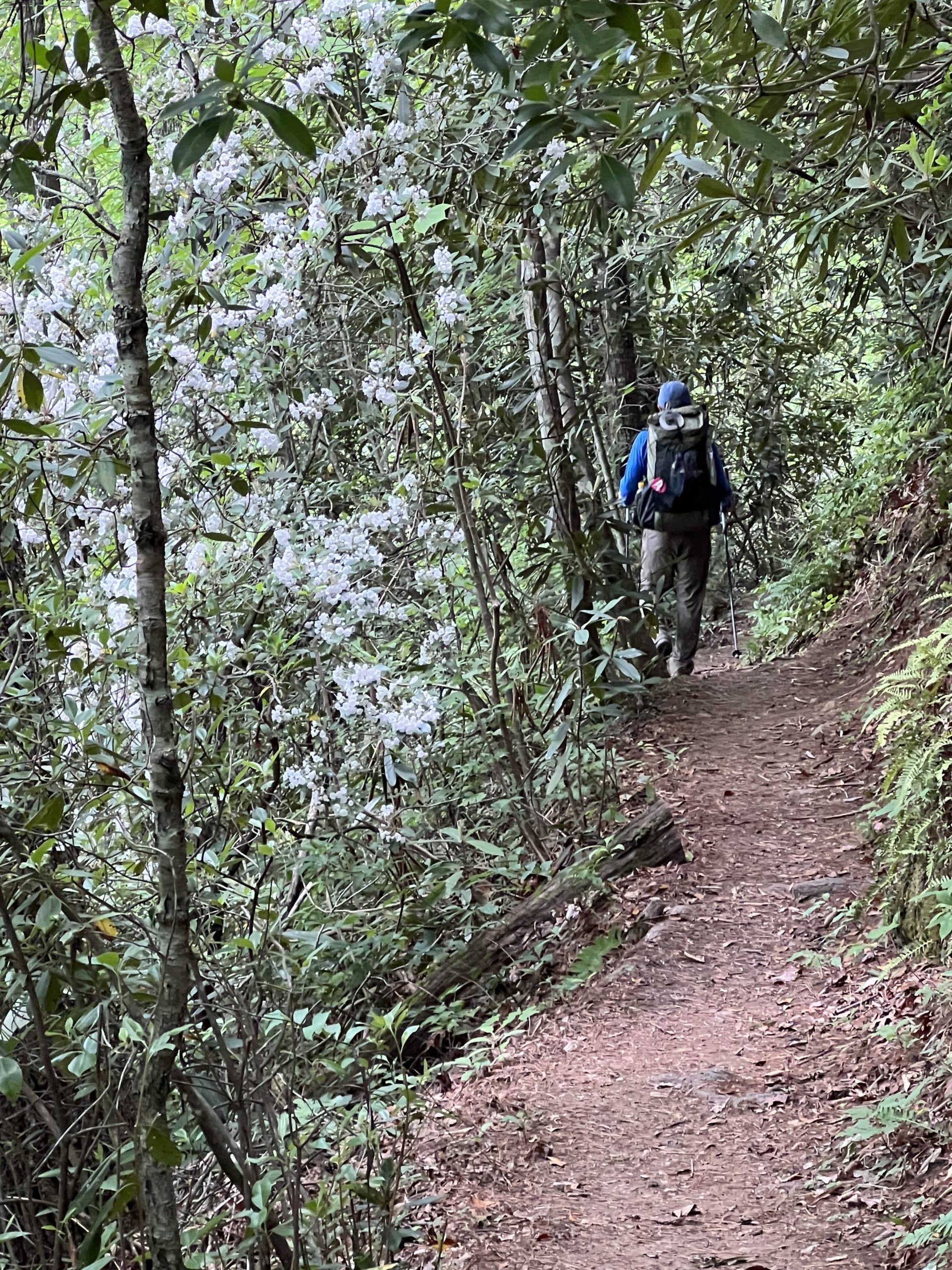 View of the day: On the way to NOC with mountain laurel blooming.

It was a long climb up (and up) out of Nantahala River Gorge to Swim Bald (4710’) where we had lunch. Along the way, we found an eastern box turtle (Terrapene carolina) in the middle of the trail as well a blue-tailed (or five-lined) skink (Plestiodon fasciatus) sunning itself on the trunk of a tree.  Incidentally, the eastern box turtle is the official state reptile of both Tennessee and North Carolina, and is considered a vulnerable species throughout its range in eastern North America forests, mainly due to getting run over by cars and agricultural machinery. We descended a little in the afternoon, but then climbed up some more to Cheoah Bald (5062’), with great panoramic views. Then a 1300’ descent to Locust Cover Gap, where we tented.

The yellow-blazed Bartram Trail, which starts in Georgia and is over 80 miles long, ends on Cheoah Bald.  This trail honors naturalist William Bartram, who explored the Little Tennessee River and Cherokee Indian Territory in 1774, and was the son of acclaimed botanist (and Quaker) John Bartram.  As a botanical aside, John Bartram discovered the Franklinia tree (Franklinia alatamaha) along the Alatamaha River in eastern Georgia, and successfully propagated it at Bartram’s Garden in Philadelphia.  This tree was later named after family friend, Benjamin Franklin. Unfortunately, Franklinia became extinct in the wild in the early 1800s, but you can still find it in some eastern nurseries and plant it your garden! 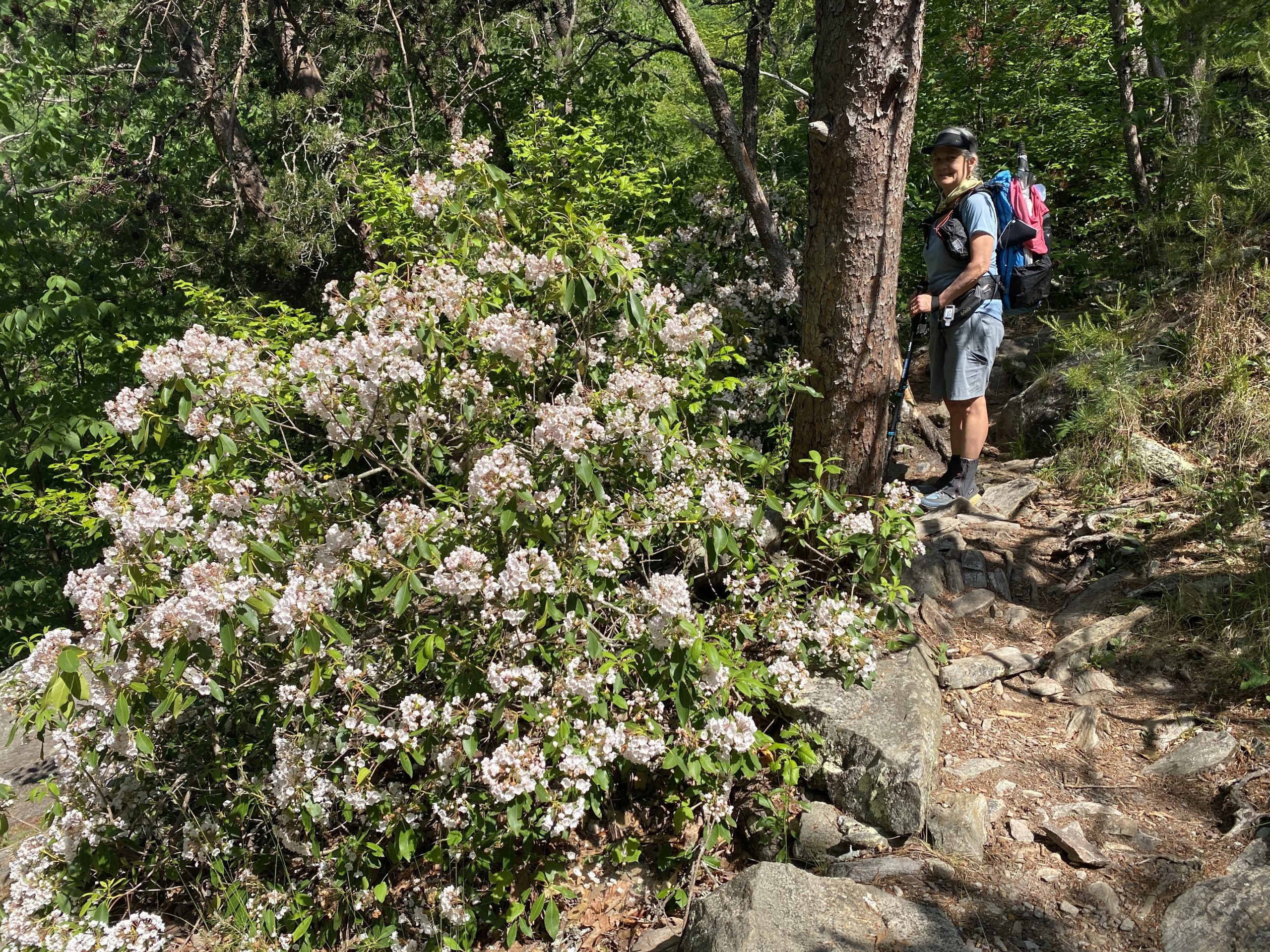 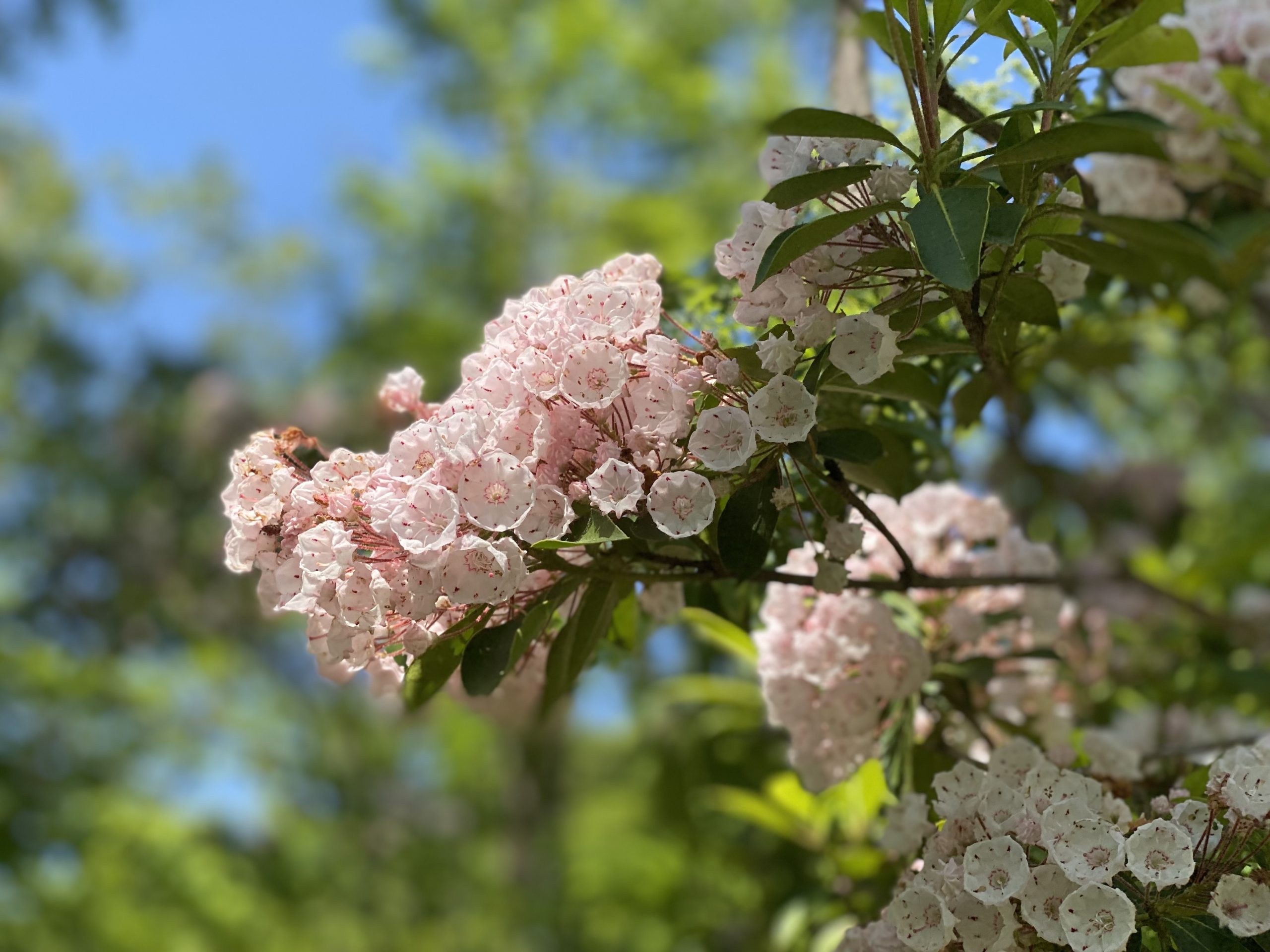 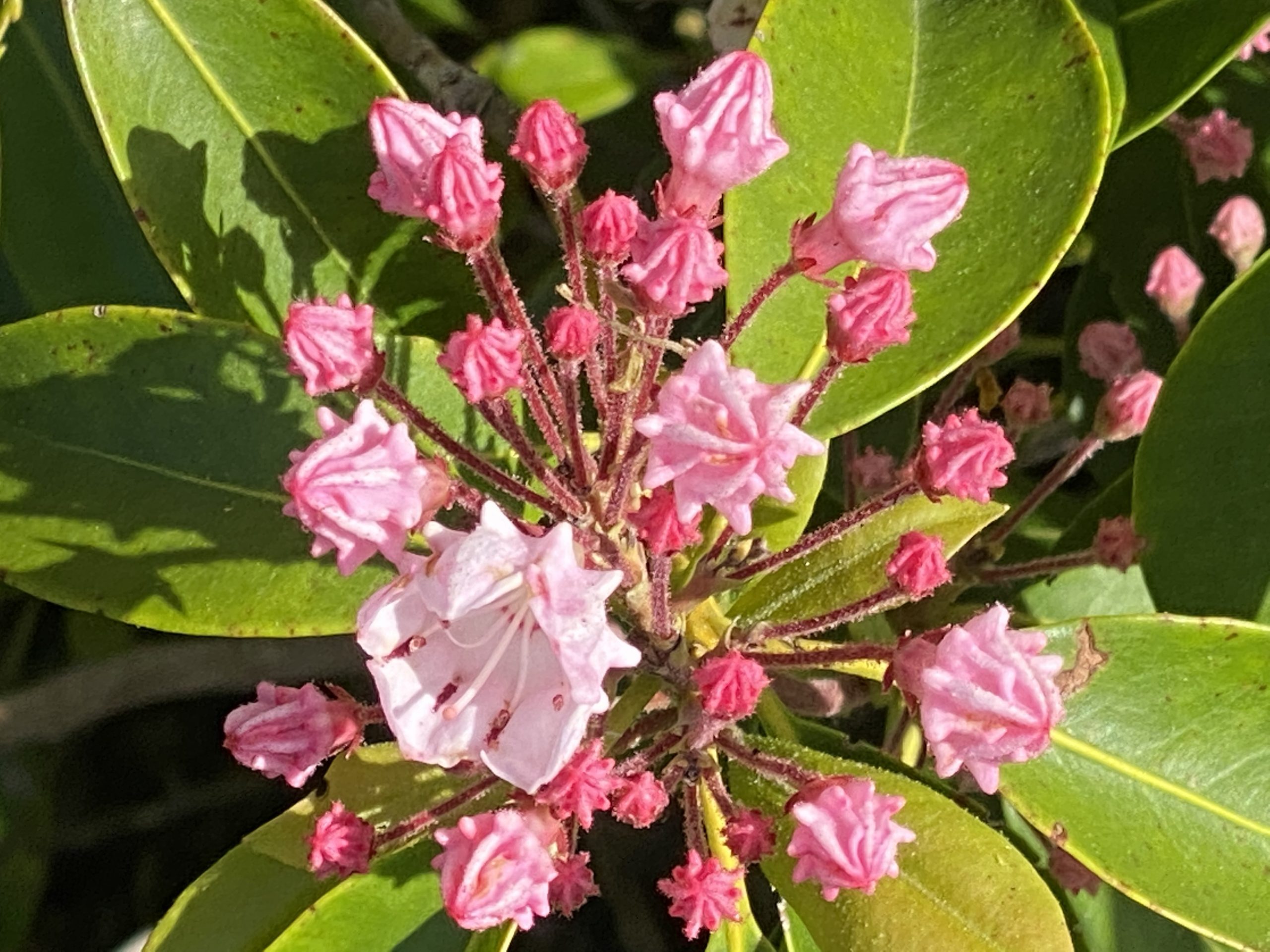 Mountain laurel is a highly ornamental shrub native to eastern North American forests, it has evergreen leaves up to 4 inches long, and commonly grows 10 feet tall, but can get much taller. It looks like a smaller version of rhododendron, and they are often seen growing together.  It is a common understory component of spruce-fir, mixed deciduous, and deciduous forests, but can also grow on mountain balds and in open areas.  Bumblebees pollinate the white to pink flowers, which look like tiny Chinese lanterns before they bloom, and the small seeds are wind dispersed.  I love taking pictures of its flowers! 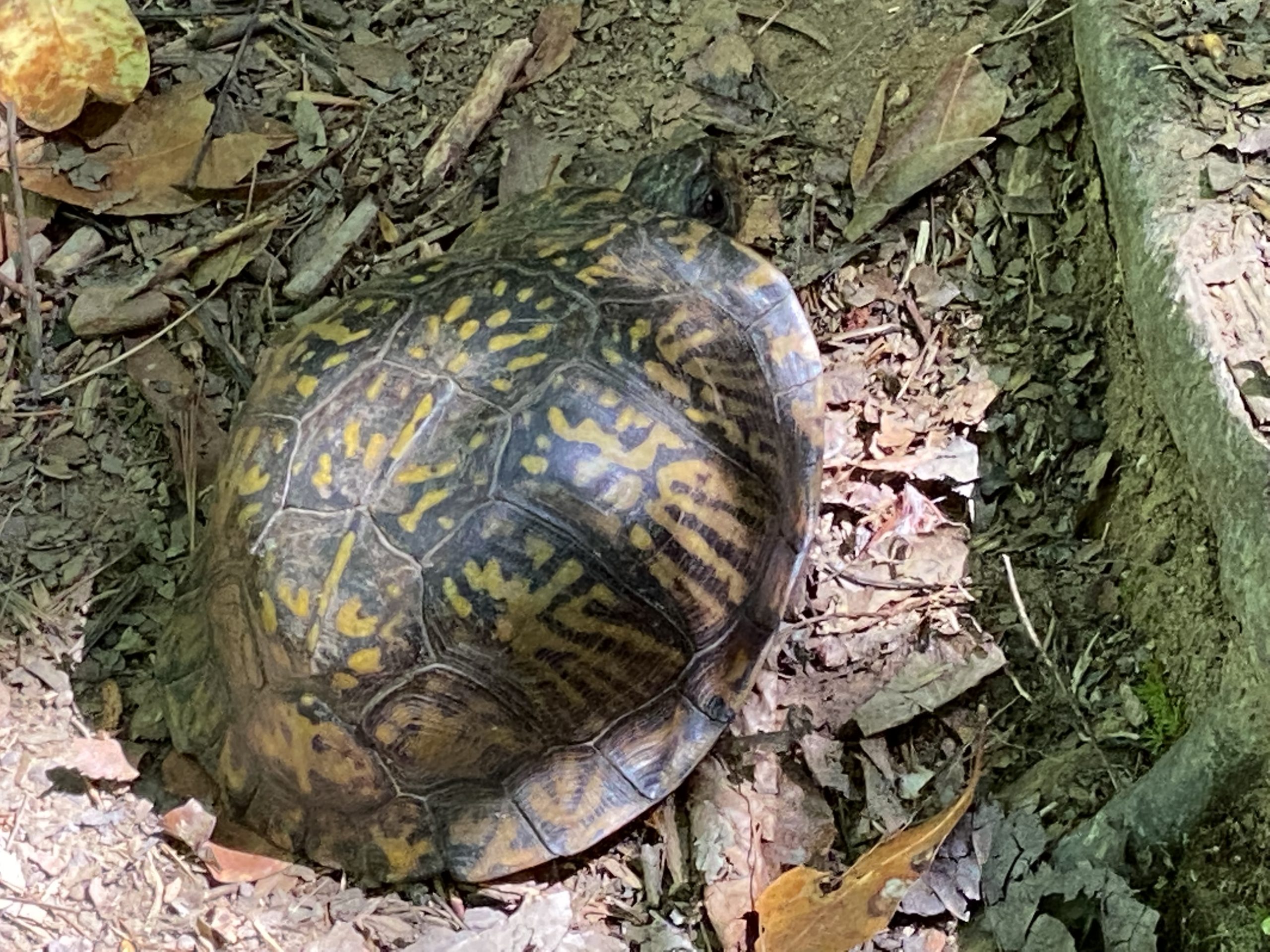 Critter of the day: According to Wikipedia: The eastern box turtle (Terrapene carolina carolina) is a subspecies of the common box turtle (Terrapene carolina). While in the pond turtle family, Emydidae, and not a tortoise, the box turtle is largely terrestrial. Box turtles are slow crawlers, extremely long-lived, and slow to mature and have relatively few offspring per year.  the eastern box turtle is the official state reptile of both Tennessee and North Carolina, and is considered a vulnerable species throughout its range in eastern North America forests, mainly due to getting run over by cars and agricultural machinery. \ 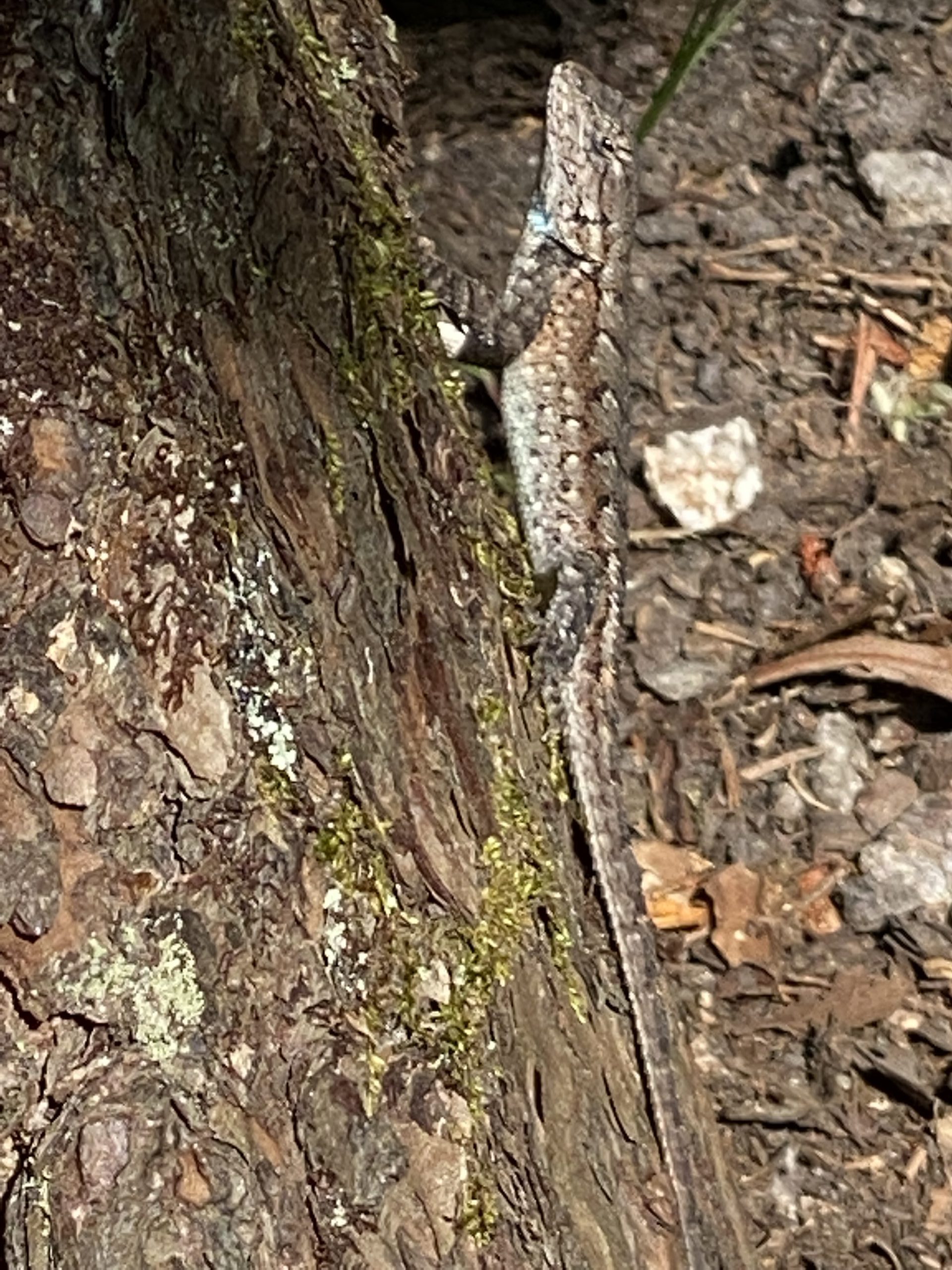 Another critter of the day:  The blue-tailed skink or five-lined skink is a species of lizard that is native to the eastern North America forests, and feeds mostly on arthropods, such as grasshoppers, crickets, cockroaches, leafhoppers, and beetles.  The blue coloration fades in older adults like the one pictured.  Juveniles can lose their tails when attacked by a predator; the tail continues to thrash around, distracting the predator from rest of the skink.

In the morning we climbed up many switchbacks to the top of Jacobs Ladder and Brushnell Knob (3928’) and past Brown Gap Shelter. Twinkletoes was the first to see a large timber rattlesnake (Crotalus horridus) crossing the trail; it started to rattle as I caught with her. Scary! It coiled up on the side of the trail, stopped rattling as we retreated a bit.  After ten minutes it relaxed and headed off downhill in the direction it had been going. Timber rattlers occur in lowland and upland forests throughout the eastern US;  For more info see Timber Rattlesnake. 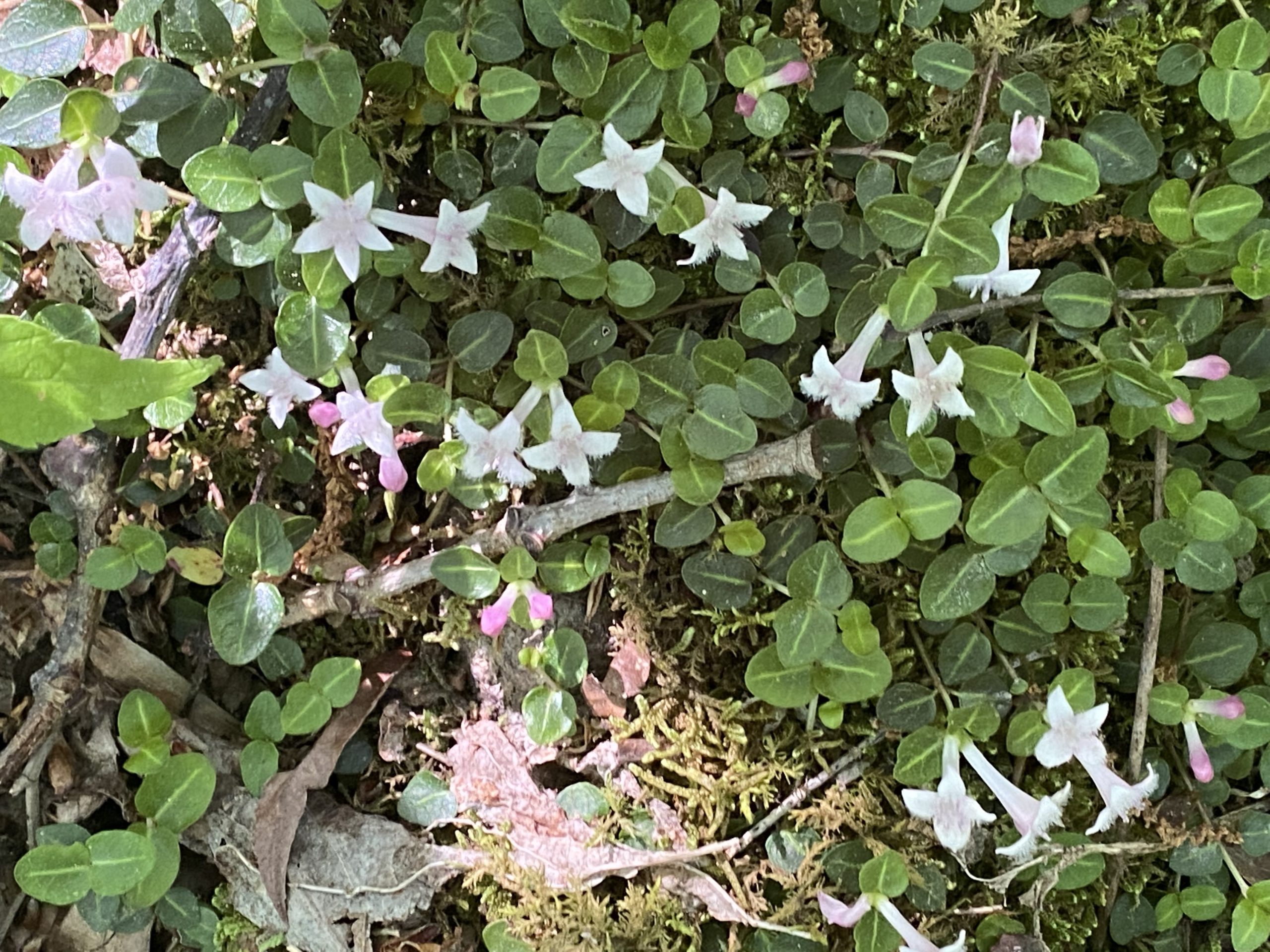 Partridge berry is a creeping, perennial woody vine, no taller than 2 in. high. All parts are dainty, including its pairs of small evergreen leaves; tiny, trumpet-shaped, pinkish-white flowers; and scarlet berries.  It is found in climax deciduous and coniferous forests in rich soils.  Insects pollinate the flowers and the red berries are favored by birds.  Partridge berry is quite ornamental and over collection has locally decimated some populations, but it can be found in many native plant nurseries, so no need to collect it from the wild. 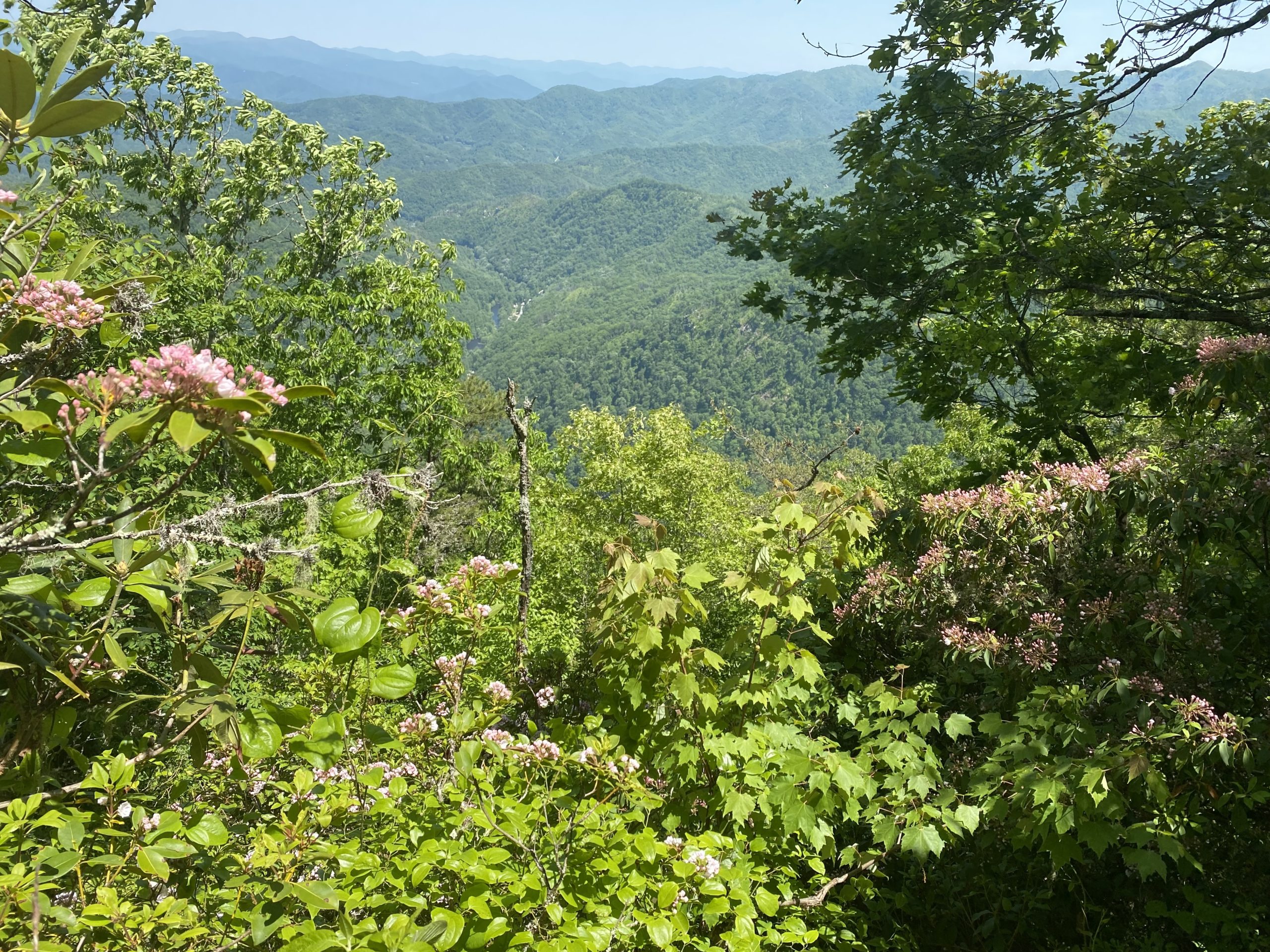 View of the day: Near Brown Fork Gap Shelter. 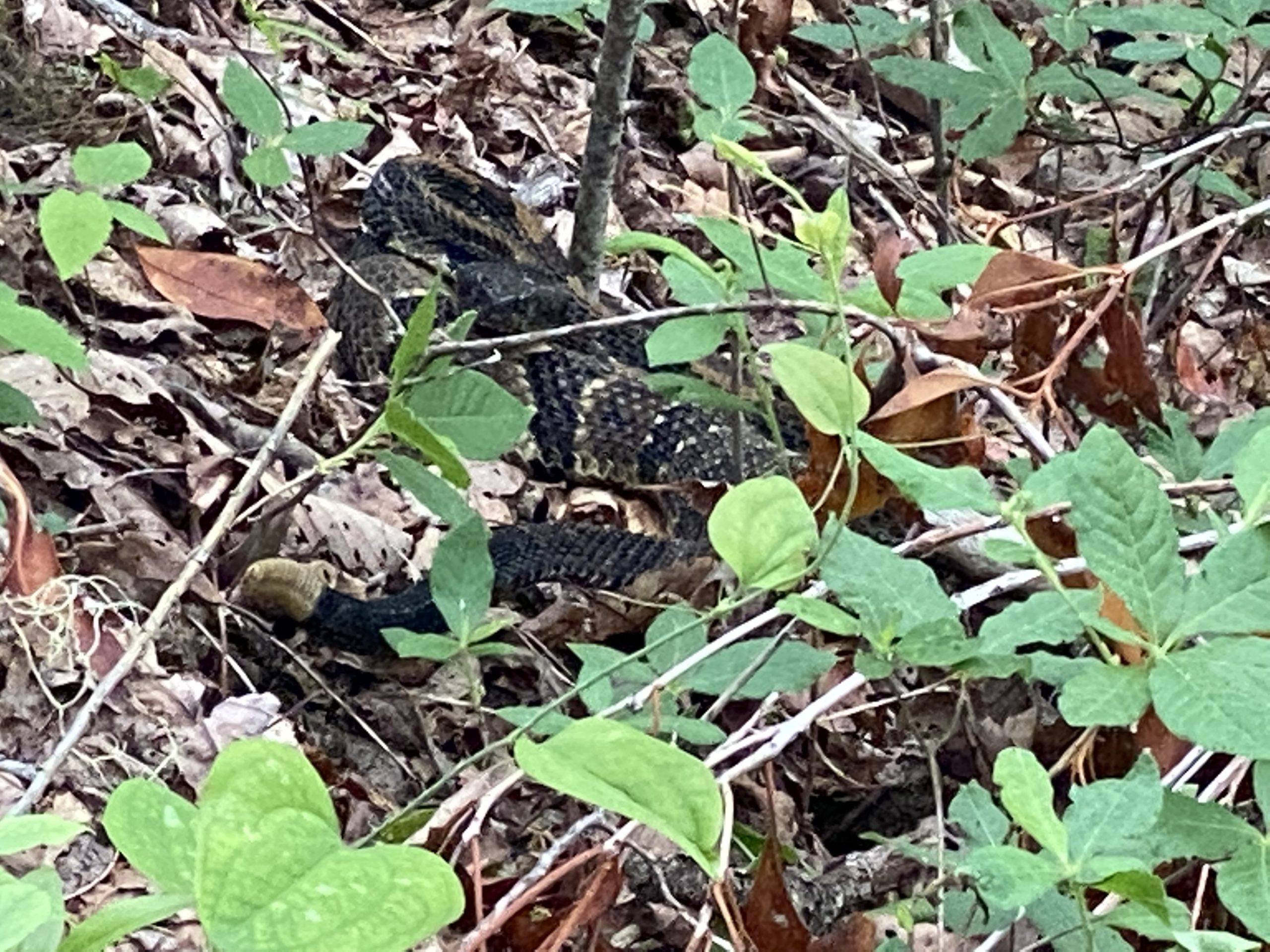 Critter of the day: Timber rattlesnake (Crotalus horridus – a very appropriate species name!).  Look closely and you will see the very dark, almost black head, and the yellowish rattle.  The timber rattler is very well camouflaged, so watch where you step!

We hiked over Black Gum Gap (which did indeed have big black gum trees growing in it) and Walker Gap and two small peaks between, then descended along the ridge to Fontana Dam. Occasionally we could see the reservoir peeking through the trees.  Fontana Dam marks the southern border and entrance into the Great Smoky Mountains National Park!  We passed the Fontana Dam Shelter, the so-called “Fontana Hilton,” which sleeps 20 and is one of, if not the largest shelter on the AT with a shower and cell phone charging station. However, the water main had broken, so there was no shower, and drinking water was provided in a large plastic box sitting in the sun of the asphalt access road.  The solar-powered cell phone charging didn’t work either. We hiked up to the road and called the Fontana Dam Village Resort shuttle! 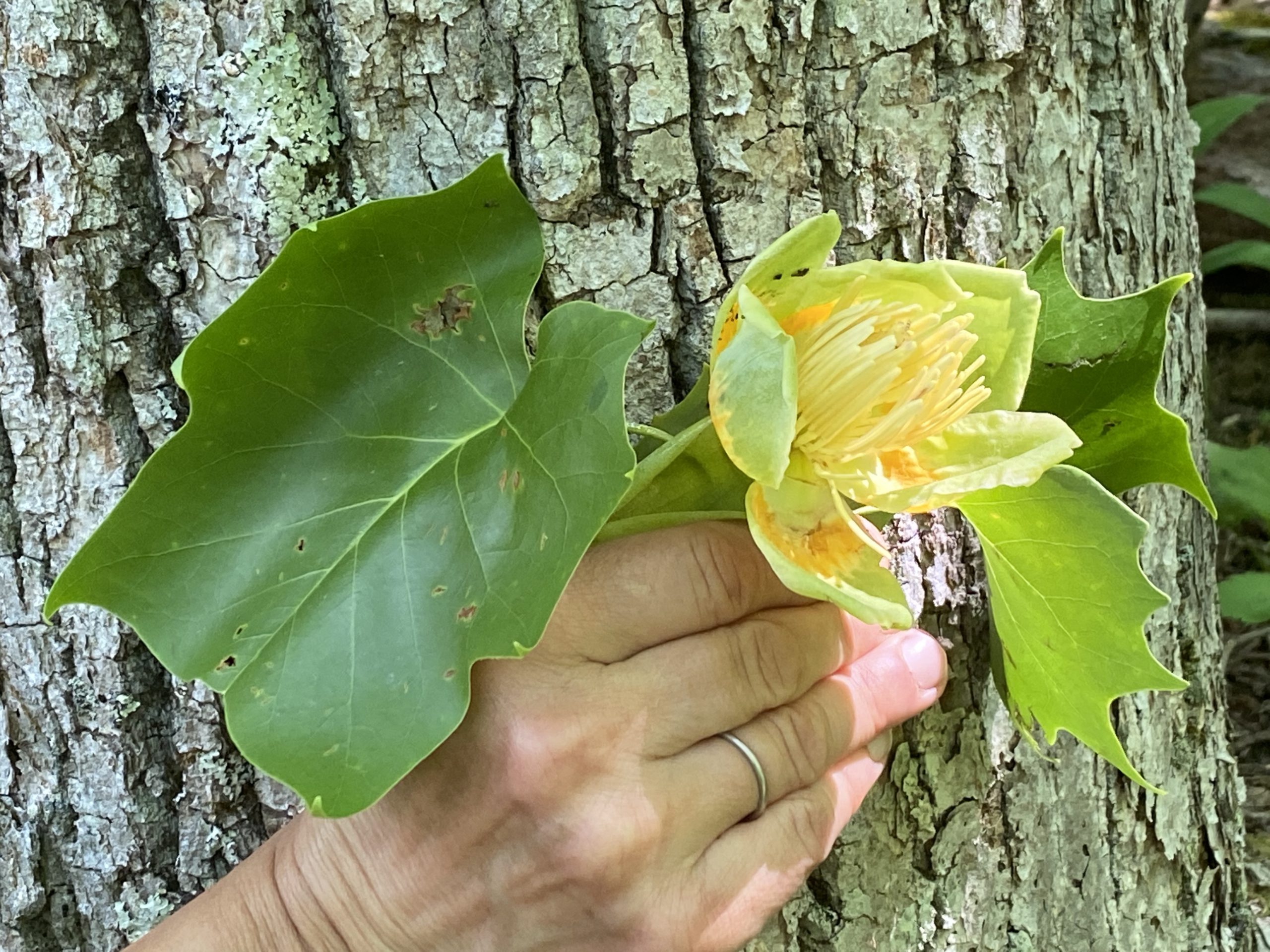 Tulip tree is one of the largest trees of the eastern N. American forests – often reaching over 100 feet in height, and four to six feet in diameter.  It develops a long, clear trunk topped by a broad, spreading crown.  This fast-growing tree often colonizes abandoned farm fields.  The green and orange tulip-like flower is not usually seen as the tree is so tall – the one pictured blew out of the top of a tree in windstorm.  The flowers are major source of nectar for bees, and the seeds are dispersed by the wind.  The tree has great ornamental value, and its wood has many uses, especially in furniture making. 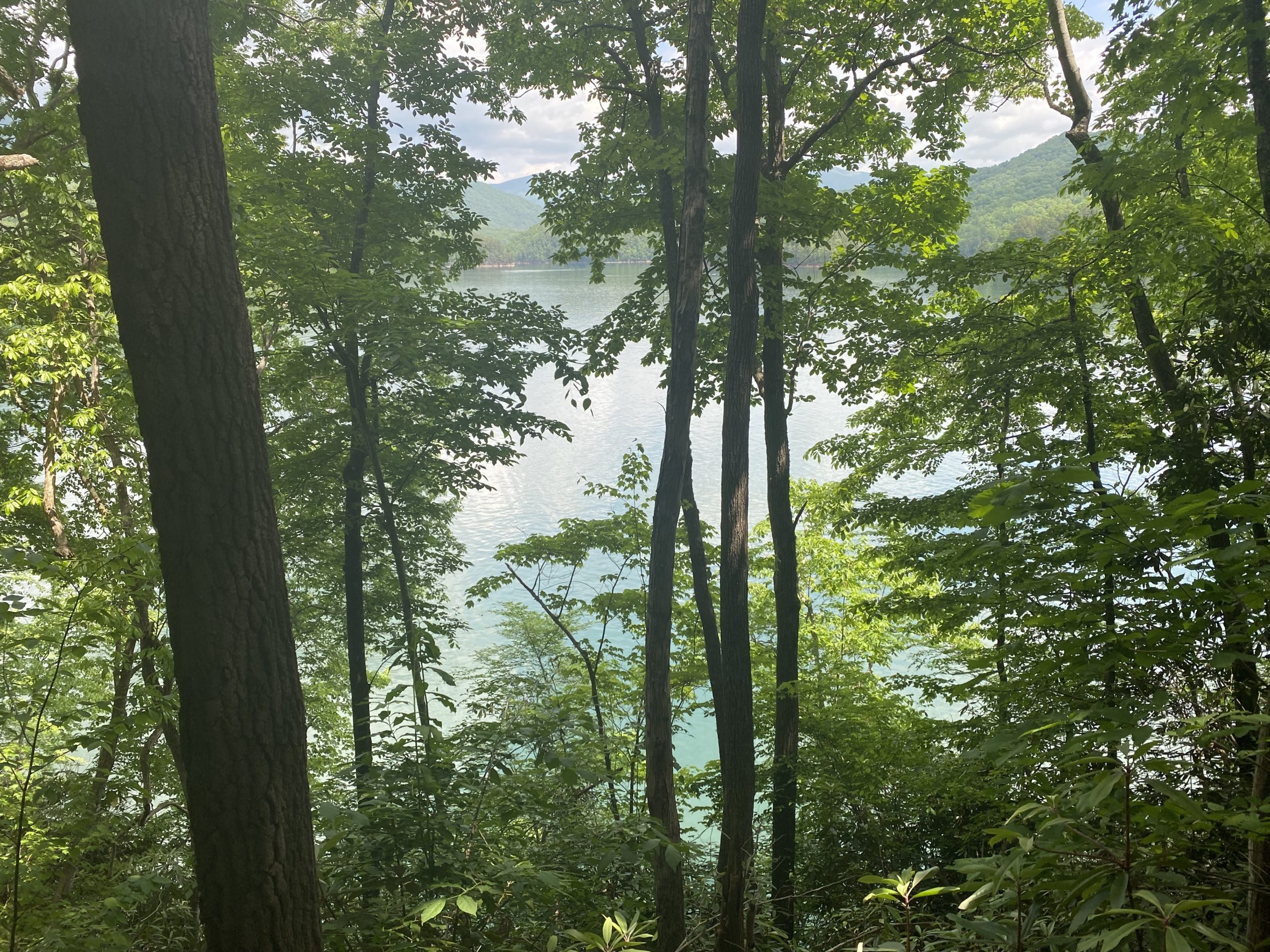 View of the day:  Fontana Dam reservoir seen from the AT through the trees

We picked a good zero day, as it rained in the afternoon of our arrival and all next day!  Unfortunately, the hotel computer didn’t work so I couldn’t do any blog posting, but we did laundry, resupply, and lots of eating and beer and wine drinking at the local village restaurant. 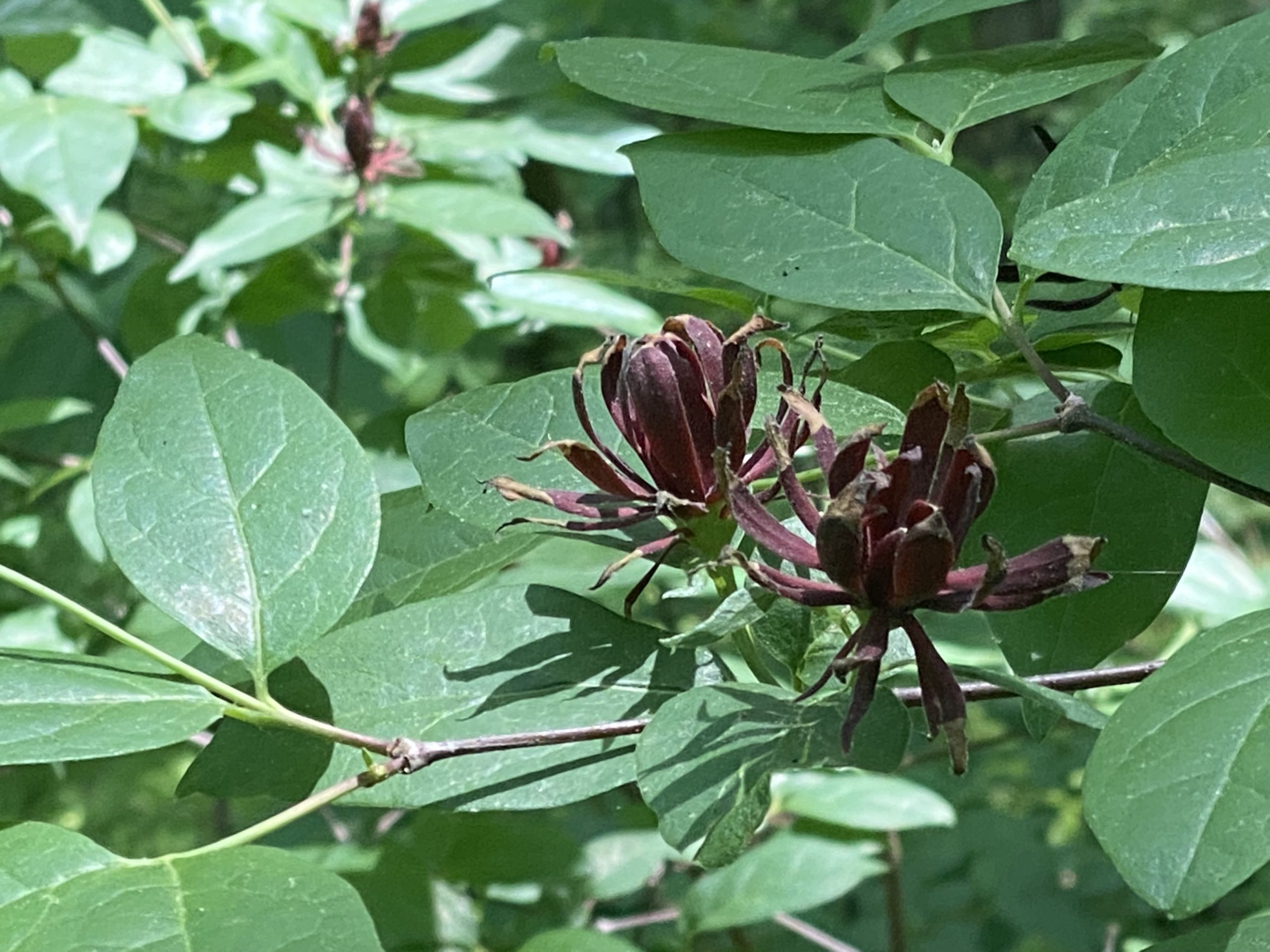 The Carolina allspice, eastern sweetshrub, or Carolina spicebush is a native shrub that reaches 6 to 9 feet in height. The highly fragrant twigs, leaves, and flowers make it an attractive native ornamental shrub. The flowers are deep red to maroon, and last a month or more, and the blooms have a fruity fragrance. It is found in areas of moist soil, along stream margins, and is pollinated by sap beetles and other insects.  This one was growing near the spring at the Brown Fork Gap Shelter at mile 152.9.

View of the day: 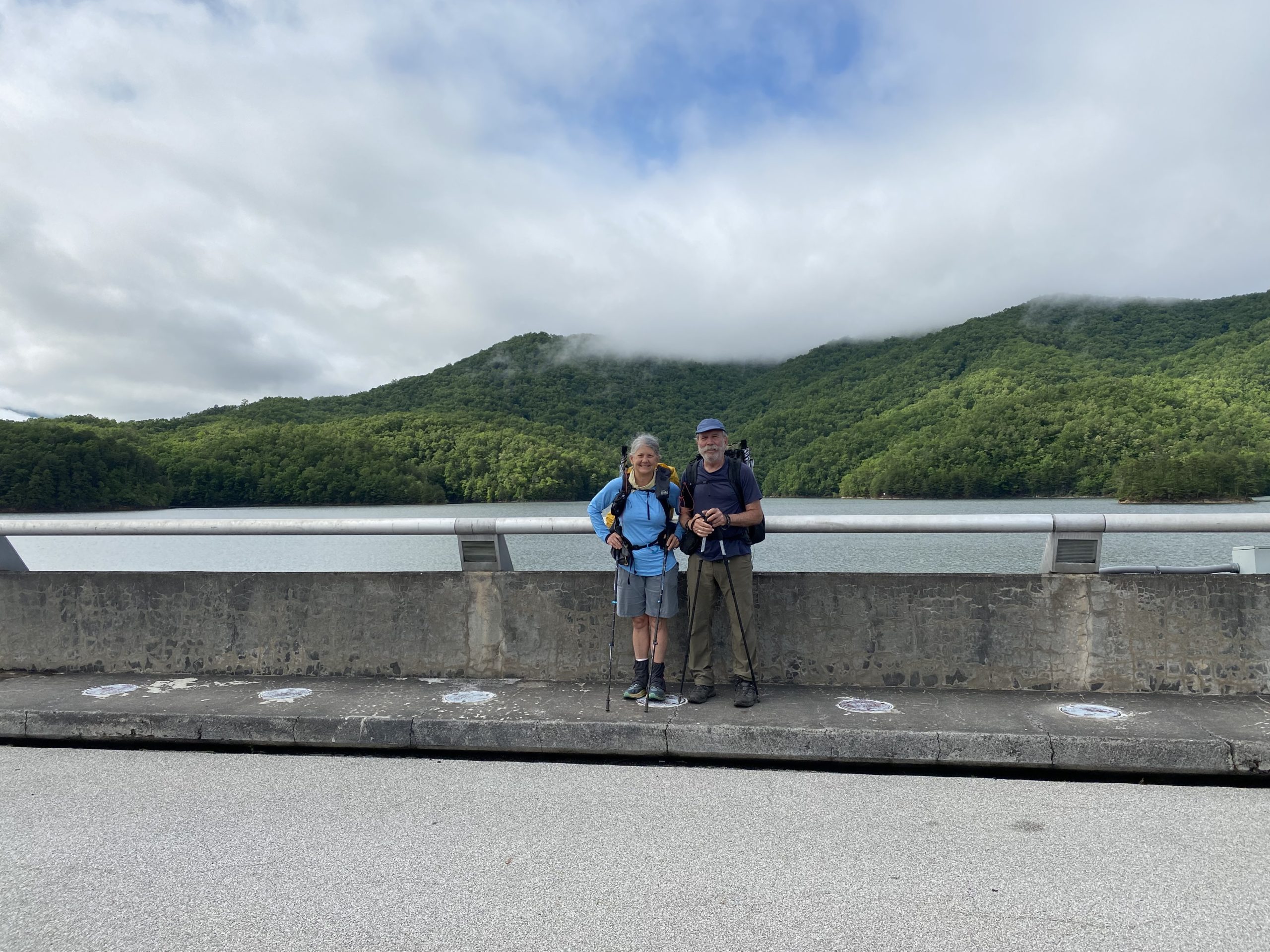 View of the day: Twinkletoes and Papa Smurf on the Fontana Dam

My name is Victor, and I've wanted to hike the Appalachian Trail since I was a Boy Scout some 50 years ago. Growing up in Delaware meant that the AT passed nearby in Pennsylvania, and our troop organized annual week-long hikes on the AT in the summer. These hikes were always great adventures, and I dreamed of hiking the whole Trail sometime. During high school I organized spring-break hikes with my friends along the AT in Shenandoah National Park and the Great Smokies. In college I organized a hike with our dorm. In later years I hiked sections of the AT in almost all of the states that it passes through with family and friends. But I never had the time to hike the whole AT all at once. Starting as a Peace Corps Volunteer in Paraguay, where I worked as a National Parks Specialist, I made a career as an environmental specialist, mostly in Latin America and the Caribbean. But now that I'm retired, and more or less healthy, I'm at last doing a flip-flop AT thru-hike: northbound from Springer Mountain, GA, to Harpers Ferry, WV; and then southbound Katahdin, ME, back to Harpers Ferry. My wife Brooke will cherry pick section hikes with me. Aside from hiking I love to bike, garden, birdwatch, x-country ski, cook and play classical guitar.