Welp. As so often happens in Gatlinburg time stood still and we were stuck for 3 days instead of 2. Partially due to the Newfound Gap road closing and partially due to an unfortunate incident during 80’s Putt Putt… we left Gatlinburg and returned to the trail on Monday morning. 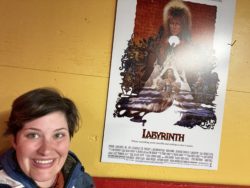 We were lucky enough to make it onto the free shuttle run by the First Baptist Church. It was surprisingly warmer up at the gap than it was down in Gatlinburg! Snow was on the ground but it was slushy from all the sun and 60 degree weather. 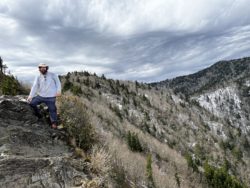 After 3 days off we felt great and had an amazing day of hiking. The views were amazing throughout but the standout moment was from Charlies Bunion. 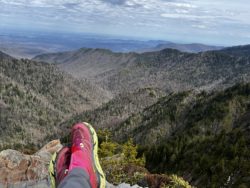 We were feeling so good we thought we’d push ourselves to 15 miles. As we were grabbing water before the last 5 miles our magical trail fairy friend Sticks walked by and told us he’d just checked the weather and saw rain starting very soon. We knew rain was in the forecast for the next day but thought it would start later. We deliberated for a while and finally decided to just stay at the shelter we were at, it was what we’d originally planned to do anyways.

We were lucky enough to snag a spot in the shelter so we were dry when we woke up to pouring rain in the morning. Unfortunately this rain did not stop by the time we were ready to hike.

By the end of the day we were recklessly splashing through puddles, our shoes were soaked, we were coated in mud, and we were pretty dang tired of hiking. The rain lasted until 2 or 3pm then it finally broke up and we got a few views, but the trail was soaked and would be that way for days. 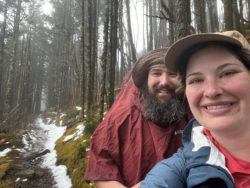 The day generally sucked but there were some pretty moments. The coolest part was that when it was really quiet, and not actively raining, we could hear all the water rushing down the side of the ridge in a thousand spontaneous streams (most of which we walked through), on its way to join the rivers down in the valley.

We were, unsurprisingly, some of the last folks to make it to the shelter. We had a tough time finding a tent spot and wound up in a challenging location on the side of a hill. Luckily the rain had stopped for good and we had a dry night. We woke up ready to finish the Smokies! Only 10 miles to go to Standing Bear hostel.

The weather was great and the clouds cleared away so we decided to take the 0.6 mi side trail to the Mt Cammerer look out tower, an iconic spot at the end of the Smokies. We were rewarded for our rock scrambling efforts with one of our favorite views, and definitely the coolest tower so far. It was hella windy but we held on and thoroughly enjoyed ourselves. 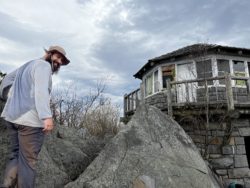 The next 7 miles felt like they took forever. Our feet were not in great shape after the rain. Bryce’s toes had chafed pretty badly and we were just moving slow. Plus, it was almost literally all down hill. Ouch. However, our elevation loss pushed us further into spring. All of a sudden there were new flowers to admire, leaves on the trees and a fresh scent in the air. 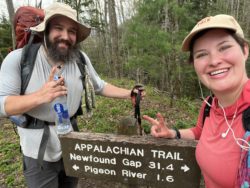 With relief we arrived at Standing Bear for a break. We had some packages shipped there so we collected those and admired our new gear. Most anticipated were a new water bladder for Bryce (his had developed an unexplained hole) and a “coupler” for a water filter to allow for easy gravity filtering into the smart water bottles. We are now living large.

After our break we cruised the last 2 miles to our favorite campsite yet. Now that we are out of the Smokies we can once again “stealth camp” aka camp wherever we want (within reason and following LNT principles.) We camped next to a babbling stream and had it *to ourselves.* It was our first night without any neighbors so far. We loved it.

We expected rain overnight but woke up mostly dry. As we climbed up Snowbird Mountain the fog intensified and by the other side we were getting full on rain. Luckily it stopped while we ate lunch and by the time we made it up to Max Patch the sky was clear and the sun was shining once again. 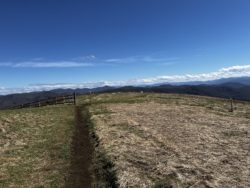 Our friend Dylan and his dog Mowgli met us at Max Patch summit! We lazed about and enjoyed the view together. On the way up another hiker had told us about a place on the other side of Max Patch where we could camp for free and get burgers and beers. We discussed the idea with Dylan and agreed to check it out. 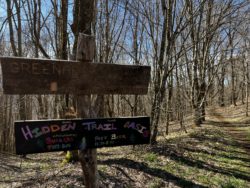 We were so glad we did! The sign did not lie. We found ourselves at a true Thru Hiker Oasis at Green Heart Lodge. The 0.4 mi detour took us past dispersed camp sites, at the end we found an open air kitchen, staffed by Midnight Rider, a PCT thru hiker from DC, a campfire surrounded by hikers, and *beer*! Midnight Rider had a great selection of beer, made the most killer burgers we’ve ever had, and just generally had a place with the chillest vibe we’ve experienced so far. Yes, it even beat the chill vibes at Standing Bear.

After we’d eaten and drank our fill, we tore Mowgli away from his new dog friend and found ourselves a free campsite up the hill. After hanging the most difficult bear bag we went to sleep to the sound of either coyotes howling or the other boys drinking moonshine and howling at the full moon..

The first 4 miles of the next day were just beautiful. It was mostly *flat,* we had many water crossings, and saw lots of wildflowers. At the next road crossing we were pleased to find trail magic from David and Debbie. They are from Asheville and maintain the section of trail we had just covered from Max Patch. They had excellent beer, sodas, chips, Easter candy and brats. David works in beer distribution so he and Bryce enjoyed chatting. We basked in the magic for about an hour then started the actual hard part of the day.

At the top of the first peak we found a man with his tiny mean chihuahua. He had set up a radio to send and receive Morse code messages. Apparently there is a whole community of people who hike up mountains and do this kind of thing. He had notepads and was writing down what he heard and from where. He heard from someone in Europe while we were there! He said he has heard from as far away as Australia before.

At the top of the 2nd peak we met a friend of ours who was in a bad way. He has having a bout of vertigo and was severely impaired in his ability to walk. We offered help but he is a stubborn ex-marine and refused until Bryce and another hiker doubled back and insisted on helping him. The other hiker took his pack and Bryce walked behind him on fall prevention duty. About 1.5 miles from the gap where he planned to be picked up by a hostel, a member of his tramily met us, he had also doubled back, and took pack duty. The other hikers friends had split his pack up and were following along with it. It was a long way down but everyone made it safely and in one piece. Yet another example of hikers helping other hikers.

On the way down Bryce proposed an “audible” and suggested we have our friend Brandon pick us up at this gap instead of going all the way to Hot Springs and losing a day with him. We called and he met us about 10 mins after we made it down. We piled us, Dylan and Mowgli and all our gear into the car and headed towards Hot Springs. After a huge and delicious dinner in town we headed to Asheville for some R&R with Brandon and Dylan. 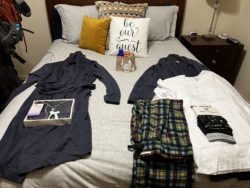 Brandon seriously spoiled us with a cozy Air BnB, champagne, nice soaps and shampoo, and luxurious pajamas (so we could wash *all* of our clothes. We ran them through the wash twice and used an excessive amount of dryer sheets. Our clothes have never smelled better.) We played in downtown Asheville, maybe a little too hard… after a Wal Mart resupply trip we hit the trail again this afternoon.

We had gotten off about 6.6 miles from Hot Springs and since it was going to rain we booked bunks at the Laughing Heart hostel for the night. As we were packing up to leave Brandon he suggested he just take our packs to the hostel, he would basically drive right past it on his way back out. We are so lucky to have such a brilliant and helpful friend.

The slack packing felt great. We flew through the miles and made it to the hostel just in time for hiker barbecue night! 3 veggie burger patties, a bag of funyons and half a Yoo-Hoo later, this hiker is ready for bed.

Tomorrow we are going to attempt to hike 15 miles. We hope to make that our new threshold for the next week, and next week we’ll aim higher! We have the 300 mile mark to look forward to in a few days plus an excellent weather forecast (aside from tomorrow morning.) We are going home the first weekend in May for our nephews birthday party and our goal is to be either in Damascus by then or within a few days of it. Wish us luck!