Day Eight: I Got My Wings 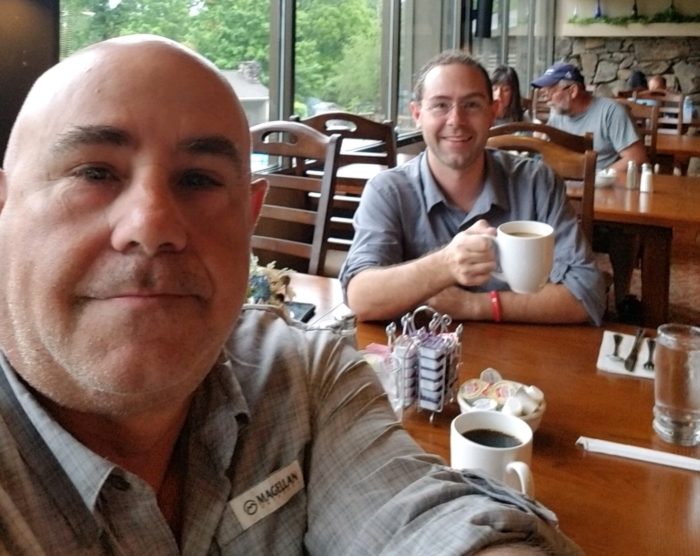 I drove up to Fontana Village near Fontana Dam on Friday night. The plan is to stay the night and then drop one car off at the dam and drive together down to Deep Gap. We fueled up with breakfast before leaving Fontana Village early enough to get to Deep Gap by noon despite the two-hour drive. I forgot how carsick I get on these mountain roads when I’m not driving. I haven’t been carsick since last year when I got a ride back to Amicalola Falls from Deep Gap. I think it’s a combination of the altitude change and the winding roads. The forest road up to Deep Gap feels like forever, by the way. 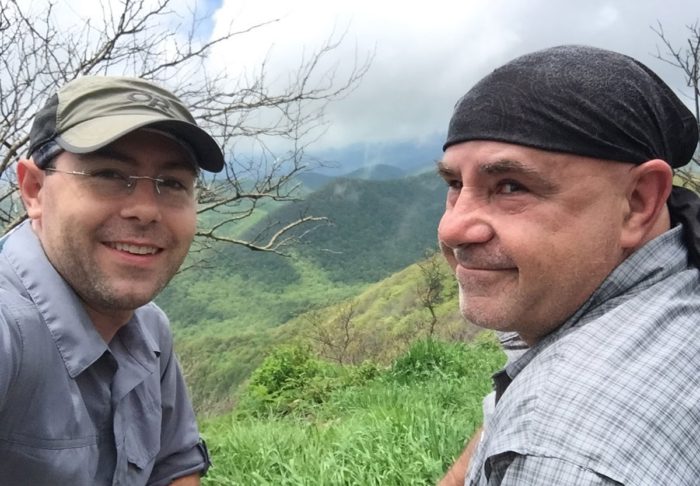 We arrived to find the small parking area there full of cars, but we snagged a spot. I signed the logbook and we got on the trail at noon. Dad and I warmed up soon enough and kept a decent pace. It didn’t take long for the forecast to come into play as the skies opened up, delivering our first rain. It was a light and steady rain, totally manageable. The rain stopped after a mile or so, giving us just enough to set the tone for the weather we would be experiencing all week.

On the way up Standing Indian Mountain, we came across a plain, black Bob Evans baseball cap. Honestly, it looks like the hat a kitchen staff worker is required to wear. Dad asked if I usually pick up things like this or leave it. Honestly, it depends on the situation but I agreed we should pick it up. I figured a day hiker had lost it and the hat would just sit in the woods as an eyesore until someone packed it out. Today that someone is me. Before you sing my praise for picking up the hat, just know I don’t always carry out the trail garbage. In fact, picking up the hat makes me feel a little better about leaving the drenched hand towel I would find a few days later. Some days I don’t pack it out. Especially when it’s a towel that probably weighs four pounds. It’s currently a bittersweet relationship of my own personal responsibility vs. the purest form of Leave No Tract. 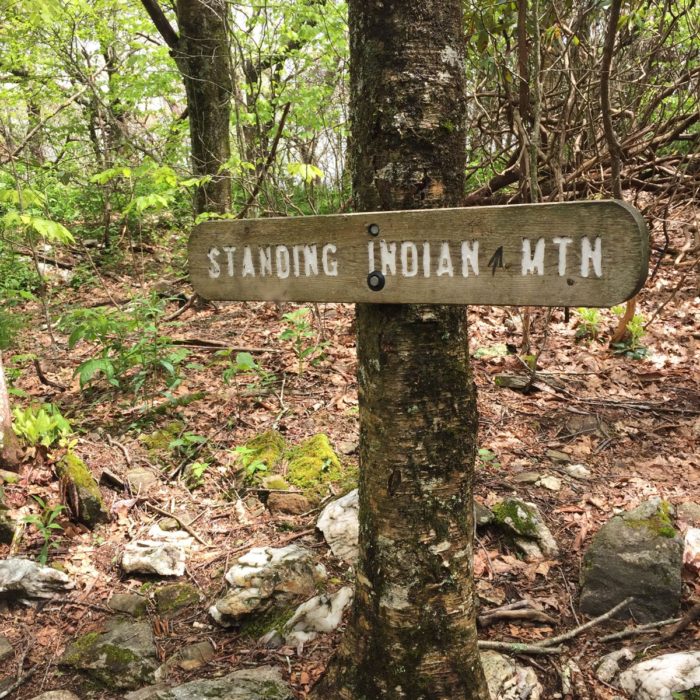 Despite fog and clouds all day, we decided to visit the Standing Indian summit for midafternoon lunch. We figured that if there wasn’t a view, we would still be able to enjoy the summit by sharing our first meal on the trail with the mountaintop. We arrived and sure enough: no view. At the summit, we found two other hikers we briefly met earlier who were now at the top and taking a break. We opened our food bags, sat down and talked with them while we ate. As our spirits lifted with the meal, so did the clouds. Like magic, the clouds opened up and we had a view! While we enjoyed the view, a small bird made good use of the fresh rain left behind in a puddle on the mountain and took a bird bath as if it the water had been poured just for him. He put on quite a show enjoying the pool of rain. 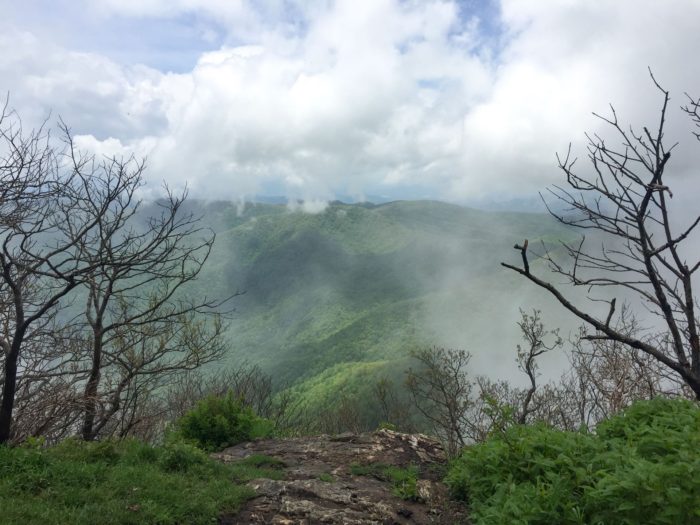 The view on Standing Indian Mountain.

Dad and I were packing up to leave and say our goodbyes to the two day hikers we met. As they were turning to leave, the younger one asked if we happened to see a Bob Evans hat on our hike up to the summit. “It was my favorite hat,” he said. “Just figured I would ask.” What? “I have it strapped to my pack,” I said. You should have seen his face light up as he tried to play it cool. He was shocked we found it and had it with us. He promptly put on the hat, grinning ear-to-ear. He explained that it was his favorite hat because he found it, seemingly brand new, on the side of the road in his hometown and figured it was lucky. Well, this is the second time it’s been found on the side of a path somewhere and found its way to him, so maybe it is. The two thanked us again and headed down the side trail back to their campground.

Dad and I started our descent and I have to admit I felt a bit of pride in the trail angel moment I had just unintentionally had. Feels good to give back to another hiker. I guess I officially have my trail-angel wings. One thing is for sure about today’s hike: we walked among the clouds.  Aside from the view we got on the mountaintop, it was mostly clouds and fog and soon began to rain some more. I can’t say it was unwelcome since it brought the temperature down and I found myself enjoying it more than not. Cooler temps make wearing my rain gear fairly easy. 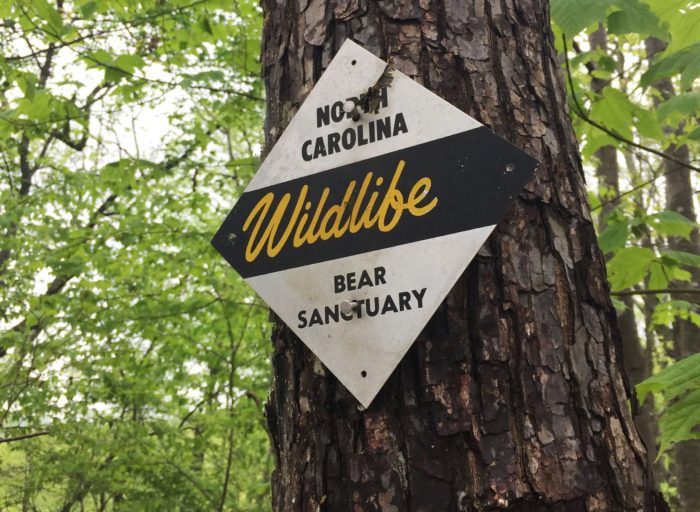 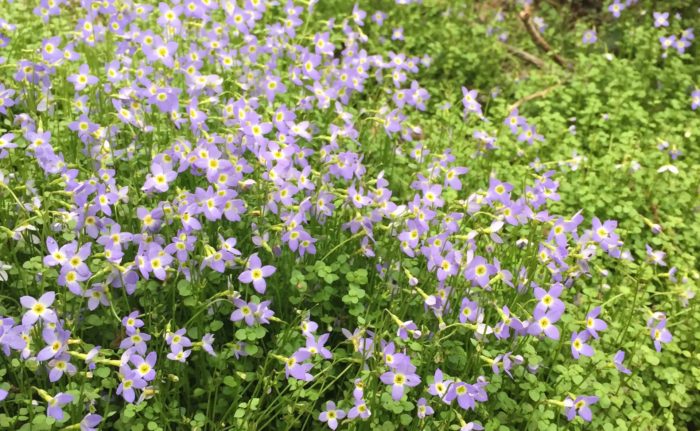 We discovered this section of trail runs through a bear sanctuary, but we didn’t see any bears. We did get our first look at some wildflowers, though. We also encountered a waterfall on the way down and crossed the water just below it. The water sources and small waterfalls were brimming with life after the rains.

The uphill at the end of the day proved tough for my dad, but he pushed through (burning calves, step aside). We definitely slowed down on the uphills, but I was stoked the first day went so well overall. We did the 8.5 miles from noon to 6:30 or 7 p.m. and had plenty of time to cook, hang our bear bags, and settle in for the night.

Until now, I haven’t stayed the night in any of the shelters. I’ve always set up my tent regardless of whether a shelter was nearby or not. Tonight, dad and I decided to set up in the shelter. We met a nice couple there who were already having supper at the shelter and thought we would be sharing the shelter with them for the night, but it turned out they just wanted to have a meal out of the rain. Dad and I got the shelter to ourselves. I wish I could remember both their names, but I only caught hers (Madison) because they had a sort of combined trail name that started with “Mad” and ended with… well, I can’t remember. Thus, my problem with remembering his name! Oh, well. I point blank asked the guy if he was “into hiking” or if it was more “her thing” and he said he was just along for the ride, anyhow. No matter since it meant dad and I would have the shelter to ourselves.  I’m not sure how many people get to hike with their parents or father, specifically, but I’m feeling pretty lucky and blessed right now to have this time together. I also have to admit, it was easier not to set up my tent in the rain and I was looking forward to not having to tear down and carry a wet tent tomorrow, either.

It’s pouring rain now and the lightning has started, too. It’s nice to be in the shelter and I hope things don’t get too crazy. The weather we’re having isn’t just a local thunderstorm, it’s the beginning effects of subtropical storm Alberto looking to make landfall in the Gulf of Mexico soon.

Later in the night, the lightning and thunder got closer and more intense. One strike in particular was so close that there was no distinguishable delay between the lightning and thunder, and it was almost deafeningly loud. Not good. It had me wondering if the tent campers at the old shelter site nearby had all come through that blast unscathed. Guess I’ll find out in the morning.