My Day as a Total Dumbass: Adventures in Slackpacking

Did you ever have one of those days where just about every decision you made was a horrible mistake?  This post is a tale of one such day in the woods of Maine.

Maine is tough.  I struggled to average eight miles per day through Southern Maine.  When I got to Monson, I think I had managed more than ten miles only a couple of times.  With this in mind, it seemed that slackpacking the first 15 miles of the 100-Mile Wilderness was a no-brainer.  My day of slackpacking turned out to be a bit more of an adventure than I anticipated.

Given my pace thus far, was I certain to walk 15 miles starting an hour later than usually just because I was packing a tiny pack?  Probably not. I really should have talked to Hippy Chick about potential places I could bail if the situation warranted it before setting out that morning. The weather was a bit sketchy and information never really hurts.

I was excited.  While my loaded pack isn’t particularly heavy at 30 pounds, it was joyous to carry less than five.  I packed my lunch, my rain jacket, a pint bottle of Propel, and my water filter.  My down vest might have been nice to have, but I didn’t really consider it.  I meant to pack my headlamp just in case I approached the road after dark.  I’m a huge fan of what I call the Santa Claus method of getting ready for a hike… make a list and check it twice.  In my excitement, I deviated from this practice for this one and didn’t actually  pack my headlamp.

The day started out great.  I had to ford a stream a couple of times that required wading.  Ropes were strung across at the ford to help.  There were a few relatively gentle (by Maine standards) ups and downs.  It drizzled on and off for most of the day.  I noticed the magical power of my rain jacket to make the rain stop simply by putting it on. 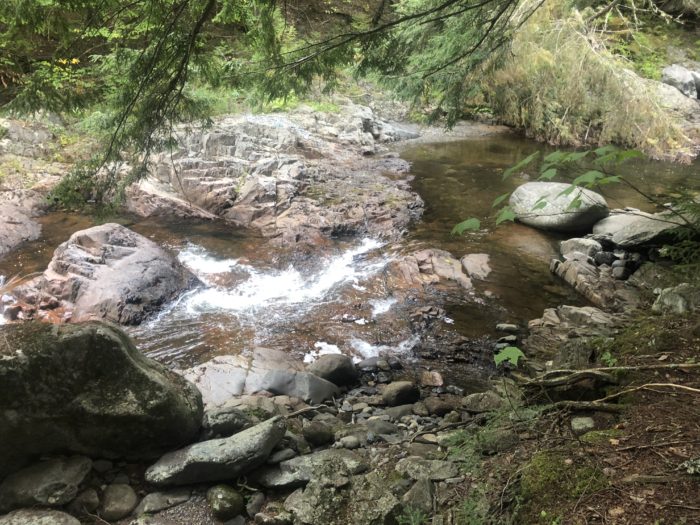 The trail for most of the day followed this stream.

About 4:30, I passed a blue blazed trail to a parking lot.  I had about five miles to go to the road.  I texted Hippy Chick, telling her that I was going to be there after dark and not to worry because I had my headlamp (actually I didn’t… intending to pack it isn’t enough).  Would it have been too tough to ask if I could be picked up at that parking lot and do the rest tomorrow? 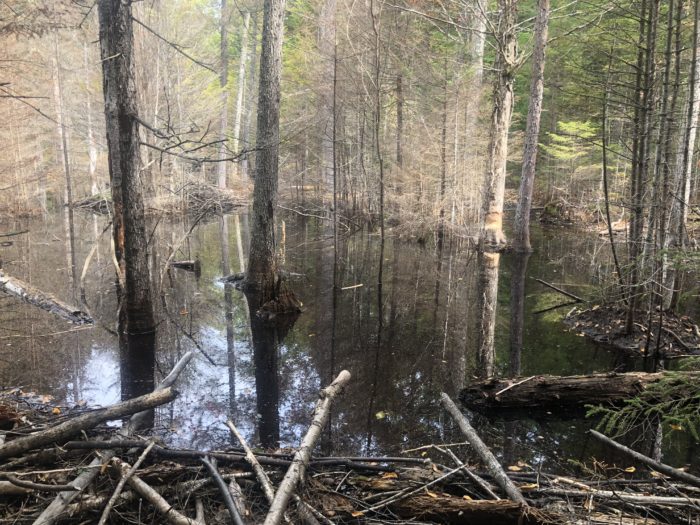 As darkness approached, I fumbled around my pack looking for my headlamp and found it wasn’t there.  No real problem yet; I had the flash on my phone and only a couple of miles to go.

Even with flashlight on my phone it was slow going and I really had to carefully pick my way.  Still made steady progress toward the road.  A little after 9, I looked at Guthook’s, and caught a brief glimpse of the map before my phone went dead.  From this glimpse, I knew I was close to the road and had a pretty good sense of the direction I needed to go to get there.   I very slowly felt my way.  I could see white blazes if I was close enough.  I managed to stay on trail for a while, but I eventually missed a turn. 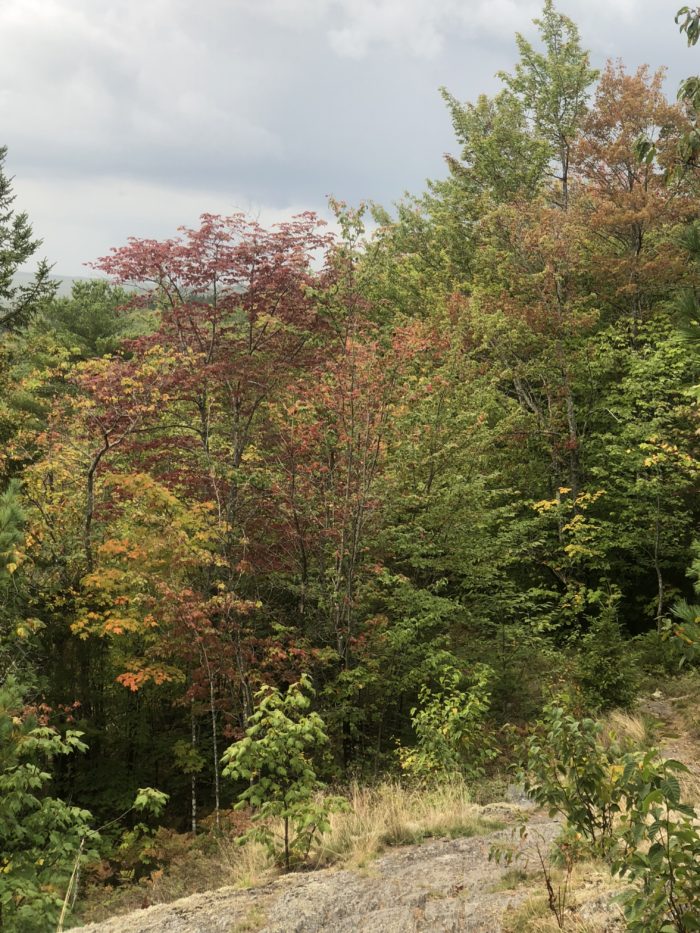 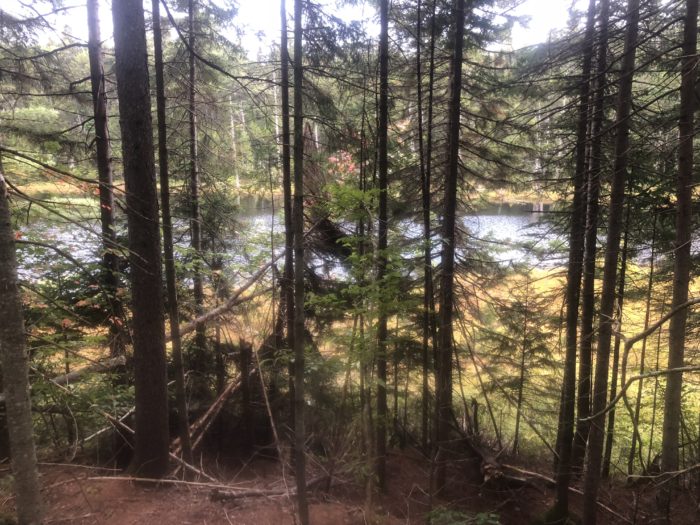 Scenic pond through the trees. It was a beautiful hike in spite of all the drama.

Leaving the trail in Maine in the dead of night is always a mistake.  I knew I was close and which direction I needed to go. Eventually I lost the trail, but instead of staying put, I bushwhacked for a while.  To illustrate what it’s like to bushwhack through the Maine woods in the dead of night, I’ll share the low point of my experience.  At one point, I stepped in a hole that was deep enough to make me fall on my face .  Luckily my head and shoulder slammed into a tree on the way down so I was able to avoid this fate.

Finally I Get One Right

Eventually I saw the most beautiful white blaze I’ve ever seen, but having been off the trail, I had to decide which direction to go.  My best guess was to the right.  Literally the only smart thing I did all day:  I decided to stay next to this tree with the beautiful white blaze.  With my back up against “my tree,” I tried to pick out where the trail was.   I checked a few of these hypotheses, but if I felt branches brush my legs, I went back my tree.  Understand the Maine woods are dark as pitch, and without any clue where the trail was, I decided to lean up against my tree and hunker down to a very uncomfortable night in the woods.

At one point, I heard a car door slam.  I called out, but no one heard me.  I may have dozed for a while.  I noticed some of the shadows were moving and looked over my shoulder to see a flashlight coming toward me.  The game warden was there to find me.  Turns out I was looking in the wrong direction.  It was less than a five minute walk to his truck.  Missed it by that much!  It was 1 a.m!  The game warden took me back to Shaw’s, I took a shower, plugged in my phone, answered a couple of worried texts from Hippy Chick and Poet (owners of Shaw’s), and went to sleep.

I was lucky to come away from this with only a story to tell.  I share this in hopes that my readers can avoid some of the blunders I made this day.