Walking gives me a lot of time to think of stupid things. I’ve started coming up with more state specific “challenges.” For Pennsylvania we have the Yuengsylvania Challenge:

If presented with the opportunity and desire to drink beer, and Yuengling is available, you must drink Yuengling.

Technically we failed on our first night in PA when we drank PBR instead, but the challenge hadn’t been dreamt up yet, so the refs are letting it slide.

First of all, we love Pennsylvania! Nobody ever says nice things about this state. They just talk about the rocks. But these first 65 miles have been some of the most pleasant of the entire trail!

The joke is that Virginia is flat, but let me tell you, we have seen more flat trail in PA than we ever saw in VA! Not only is the trail itself nice but we keep going through these nice state parks and cute towns. I feel like I am on the Camino de Santiago, not the Appalachian Trail this week! Wild berries have also been blooming. In addition to tons of town food, I’ve also been eating wild blueberries, blackberries, and wineberries by the handful! 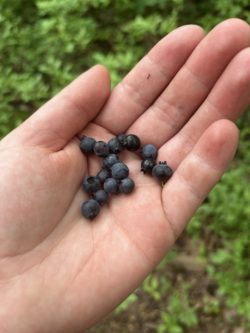 When Christi dropped us off just after the border on Wednesday I was so sad. I’d been on the verge of tears all day and was feeling anticipatory homesickness. I was also worried and disappointed because the time off had not healed my sore left foot. It was improved but not painless by any means. How would this foot make it to Maine?

The first few miles felt good but by the time we made it to the first shelter we were pretty tired. And it was hot and humid. We sat down at the picnic table, I ate the rest of my Sheetz sandwich from earlier, and we spent the next hour doing sudoku puzzles. (I got a sudoku book so I can try to get as good as Pinky.)

The break was refreshing and we cruised the last few miles to the next shelter, giving us an 8 mile day. We spent a really pleasant evening talking about books and politics with the other shelter residents- Grommet, Skipper, Parachute, Pie, and Little John. It threatened rain all evening and finally started after we went to bed. It was a nice, cool, steady rain and it lasted most of the night.

The morning was dry but humid. We loitered over breakfast talking with Little John, Pie and Sauce. Not too long after we started hiking, Pie caught up to us and we hiked together for a little while. It was fun getting to chat with her, we haven’t hiked and chatted with a new friend in a while! Ultimately, she passed us, she’s a much faster hiker than we are.

We took our lunch break in the lovely Caledonia State Park. Pinky took a long walk in search of an outlet so we could charge our battery and phones but never found one. Even power-less it was a top tier lunch spot. There was a water fountain, shady picnic tables, and a river where several children were playing and fishing.

Eventually we moved on to finish our 18 mile day. We hiked about 2 miles then stopped at the most adorable shelter on the AT. It even had a resident frog in the spring! The biggest frog I’ve EVER seen. 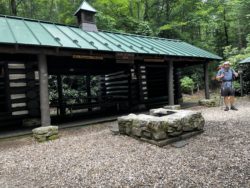 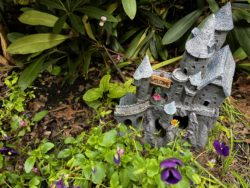 Just a small taste of the decor at this shelter !

Our feet were not super excited about the big day, but they got us there. We camped in a really nice big open campsite with lots of pine trees that gave us a nice soft pine needle floor. While we were setting up a person on a bicycle rode past! That’s how flat and smooth the trail was in that section! 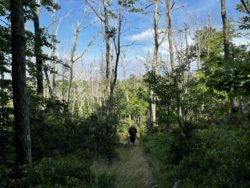 The nice, flat trail continued for quite some time the next morning. We covered the first 4 or so miles super fast. We were rewarded when we came out into a parking lot at 9:30 and found Dennis and Marie with trail magic! Dennis was waiting at the edge of the woods and hailed us in. He had a legit hand washing station on the back of his truck- real soap and a big jug of water! After we washed our hands we sat down to drink sodas, chat, and eat hot dogs.

Dennis and Marie have been doing trail magic a few weekends a summer for 8 years! They met some hikers at Pine Grove Furnace and the rest is history.

They had a photo album of all the hikers they served over their June trail magic weekend. We looked through it and were tickled when we found friends from our first week in Georgia- Splitzy and Genie! They were last months winners of the “surf and turf dinner”- a treat Dennis and Marie do for a pair of lucky hikers once each day!

After our hot dogs we moved a little more slowly. It took us until almost 3 to finish the 11 miles to Pine Grove Furnace. Along the way we hit the official halfway point!!! 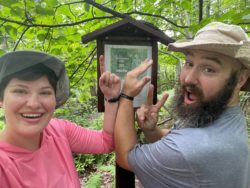 It’s hard to believe we are halfway through this journey. It feels like we have been out here for a lifetime and also no time at all. What better way to celebrate our accomplishment (and soothe the sadness when we consider the end) than to eat a bunch of ice cream!!?

Pine Grove Furnace is another state park, primarily known to hikers for the Half Gallon Challenge! It also has a campground, hostel, Appalachian Trail Museum, and a lake for swimming. It’s really cute.

We didn’t attempt the “full” half gallon challenge. The store says you have to eat a tub plus a pint to make an actual gallon, but we thought it was enough to go for the tub. Pinky chose Moose Tracks and I chose Cookies and Cream.

Several other hikers were on the porch attempting the challenge. While we were eating, Raccoon Man finished his and Parachute gave up with the end in sight. Doin It decided she would rather go see the museum before it closed at 4 than sit and finish her ice cream. After Pinky finished his ice cream we followed Doin It over to the museum (I thought maybe a walk would help me be able to come back and finish… I was wrong.) 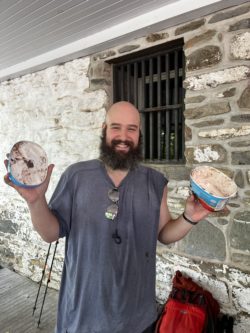 The museum is delightful. It’s the first museum dedicated to the AT and hiking. Upstairs there are exhibits about todays trail culture. Downstairs is all about the making of the trail and famous thru hikers. It inspired me to start reading a biography of Benton MacKaye- the idea man behind the AT.

After perusing the museum we went back to the store to loiter some more. We spent 3+ hours hanging out. I did another sudoku puzzle. My sister called. We ate some chips. We chatted with the other hikers. It was lovely. But we couldn’t stay all night. No camping allowed on the porch.

Due to all the ice cream sitting in our bellies, we decided not to hike further than we had to. There is no stealth camping allowed inside the park. Luckily the edge of the park was only a mile away. We found a huge campsite and settled in. 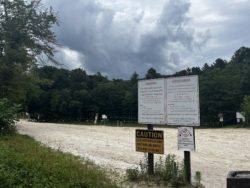 It rained again overnight but again, cleared up by the time we were ready to hike in the morning. The highlight of the day was stopping at a deli/convenience store 0.2 off trail. The Guthook comments were mixed, but our experience was A+! Look at this sandwich! 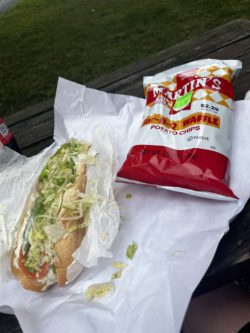 There was a really nice campsite right next to a perfect little creek about 0.1 before the shelter. We sat there for a while and debated what to do. Eventually, Pie, Little John and Sauce walked up. After about 5 minutes they decided they were staying so we decided to stay, too. It was a good decision.

The next morning we were motivated to get going early so we could hit up the Cafe 101 in Boiling Springs for brunch. We crossed the peak of Center Point Knob, the original midway of the AT! 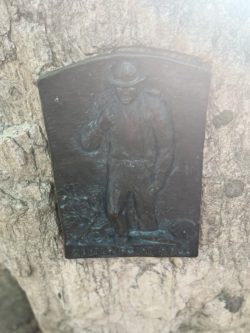 Then we climbed down to the Cumberland Valley and began the 15 mile valley crossing. 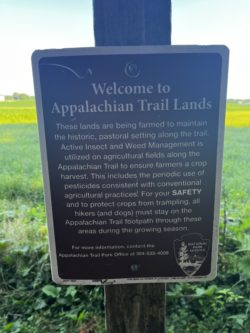 It was incredibly beautiful. We walked through fields with tons of wildflowers. Woods with our first sighting of the invasive Spotted Lanternfly- not a good bug but a very cute one. Except for when they jump. They can jump really far and it’s really creepy. 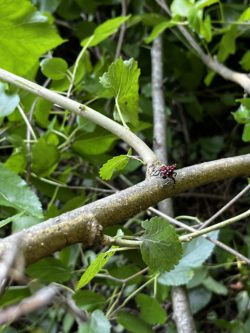 The best part of the Cumberland Valley crossing? It’s FLAT!!!! 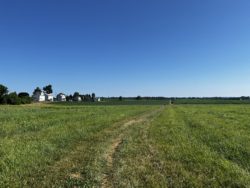 Boiling Springs is probably the cutest AT town we’ve seen yet. There’s a big furnace from the old iron mill. 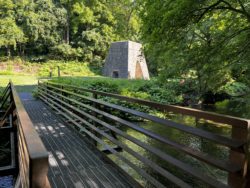 A lake in the middle of town, presumably the spring that was dammed to provide hydropower for the mill. 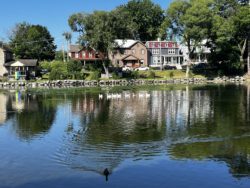 The lake had tons of ducks. Many people were walking around the lake and everyone we met was so friendly. We stopped in at the outfitter then went over to the Cafe 101. When we saw it we thought there was no way they’d serve us dirty hikers, it looked so nice. But the longer we were there, the more hikers we saw roll up. We sat outside and had the most amazing brunch.

We didn’t want to leave Boiling Springs but we did want to get to the hotel in Carlisle where we planned to stay that night. The walk there was more of the same. It was lovely. Plus, we were surprised by some trail magic sodas from Nuts in a parking lot! 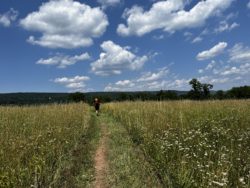 Carlisle is basically a big truck stop. All the amenities are within half a mile of the AT and the busy road has a nice big shoulder for hikers. We had a surprisingly pleasant stay there. The highlight was the Indian restaurant in a gas station, and some cold Yuenglings, finally. 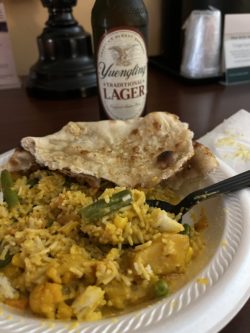