Hot Dog dropped us off back at Deep Gap on Saturday night where some folks were already camped and graciously had a fire waiting for us after we got set up. We spent our coldest night on trail so far and woke up to extremely high winds and freezing temps, a great way to celebrate our 1 year wedding anniversary. It took us a while to get packed up because our hands kept getting frozen. Bryce was worried he got frostbite from getting our bear bags down and getting water! The water actually started freezing before we started filtering it.

Luckily, the best cure for being cold on trail is to start hiking! Pretty soon into the climb up Standing Indian we were feeling good. We took the blue blazed trail to the summit and were glad we did, the view was amazing! We couldn’t stay too long though because the wind was strong up there, we almost got blown over a few times. The rest of the day was very chill, both literally and figuratively.

We camped Sunday night at our favorite spot so far, Betty Creek. Our tent was nestled in a rhododendron grove. Just magical. 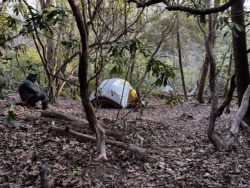 In the morning we climbed Albert Mountain. The last bit of the climb is a steep rock scramble, it’s tough but very fun. At the top we were rewarded by our first fire tower and the 100 mile mark !! The views from the fire tower were the most spectacular up to that point. We ate a quick snack and hiked an easy gradual descent down to a nice new shelter where we made friends with some nice thru-hikers attempting to make it to Katahdin in their 70’s! Robin and Sam (aka. Batman) were great company. We later camped with them at a lovely stealth spot on a ridge about 1.5 miles past Rock Gap Shelter. Hopefully the forest services in North Carolina have already emptied the overflowing trash cans we passed on the way to our campsite, they were probably the grossest and most disappointing thing we’ve seen so far.

On Tuesday we climbed down to winding stair gap and then up to Siler Bald. It was a long, tough climb, plus we did the “bonus miles” all the way to the summit of the bald. We oohed and ahhed over our next most spectacular 360 view and ate a leisurely lunch. It’s truly overwhelming how beautiful these mountains are. We are so grateful we get to be in the midst of them every day. 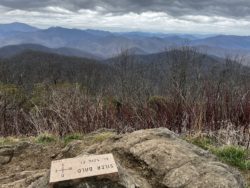 To get to Wine Spring, our next campsite, we had a steep end of day climb. When we got there, Mermaid generously pointed out the best campsite. It was right next to the creek and we could hear soft water tinkling beside us all night. Plus, we had a lot of space to ourselves, a rare and appreciated experience these days.

On Wednesday morning we once again had high winds greet us at the summit of Wayah Bald. This one has a big stone tower, the site of another old fire tower. 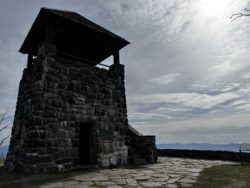 We explored and then had a “brunch” of a Backpacker Pantry “chocolate cheesecake” that was just really rich pudding.

We just had an 8 mile day planned and thought we might make it to the shelter early enough to snag a spot out of the rain and high winds forecasted over night. Unfortunately everyone else had the same plan and when we got there at 2:30 the shelter was already full. Using our lessons learned from our last overnight rain storm, we painstakingly chose what we hoped would be the most optimal site for our tent- not on the ridge, not flat and not in a major drainage corridor.

The evening was beautiful and it was hard to believe a big storm was going to roll in. Bryce played a game of chess with SMOG and we chatted with other hikers until bedtime. We slept well until the rain started around 2am. Then we were in and out from the noise of the storm. We expected rain all morning but it actually stopped as soon as the sun came up! Our tent did really well and we stayed much dryer than last time, we just had a lot of mud spray up on the sides.

We left camp as the sun began peeking through fluffy clouds with high spirits because we planned to get picked up by a hostel at the next gap. We took another blue blaze and got to the top of Rocky Bald (that blue blaze went on forever !) where we had been told to call the hostel to arrange pick up. HOWEVER, our calls wouldn’t go through! We kept getting a busy/disconnected signal. We called a bunch of times over half an hour and finally conceded, with some tears from Mirage, we would not be getting through to them. We thought maybe we could call another shuttle and have them take us there. The first one we called, Patrice, said it was too far to make sense for her and she didn’t know anybody else near us. But she was the nicest person and offered to try calling the hostel too, in case it was something to do with my phone. About 20 mins later she called back and said she also couldn’t get through. We had to come up with plan B.

We were almost out of food and desperate for a shower and laundry, so we needed to get somewhere tonight. We were about 9 miles from the NOC so we called and arranged for a bunk room. Then we put our fast walking legs on and booked it. It was already 11:30 and we wanted to get there in time for a burger and beers before the restaurant closed at 7!

First we climbed up Wesser Bald, another fire tower with an amazing view. 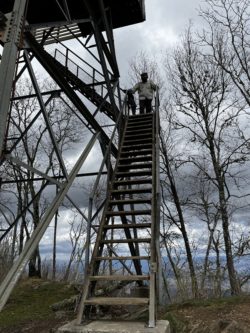 We took a quick break and then basically took off running. The ridge walk had a ton of blow downs and was a bit of an obstacle course, then we had the steepest and longest descent of our trip so far. It was a gorgeous day and honestly a really fun section, even if a little sketchy at times. 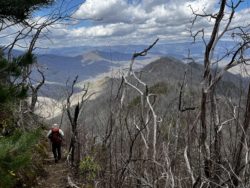 We made it to the NOC by 4:40! Our fastest 9 miles ever. We checked in to our room then got the best salad ever and giant burgers and 3 kinds of potatoes and several beers. We felt much restored after our meal. 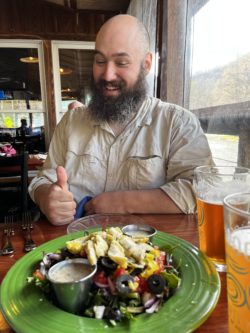 Exhausted, we headed up to our bunk room for showers and laundry. Laundry here is like half a mile away from the bunk rooms and we did not plan well, so we wound up doing laundry until 10pm. We slept to the sound of frogs chirping and woke up this morning refreshed and ready to hit the trail again. Next stop Fontana Dam!!