As soon as we entered Connecticut the vibe of the trail completely changed. It was *manicured.* These CT-AMC trail maintainers are on point. All the signage matched. There were beautiful switchbacks and stone steps. 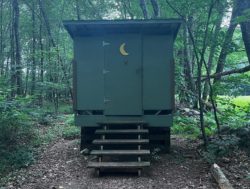 Even the privy got the same paint job. (Tho not all privies had walls to paint..)

A few days into CT we actually met a club volunteer, Julia. She told us that one staircase is 96 steps long. When she and 5 other volunteers were building stairs one day it took them 6 hours to do 5 stairs. Can you believe it!!? She also thought the signage should be a brighter color but understands the goal is to blend into the wilderness. 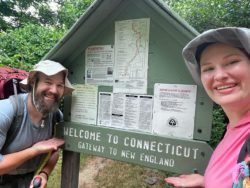 So getting into CT was awesome. Throughout the state the trail spends a lot of time on the banks of the Housatonic River. We pretty quickly hiked down to it and had a lovely walk along it.

We took a detour to visit Bulls Bridge, a beautiful old covered bridge! 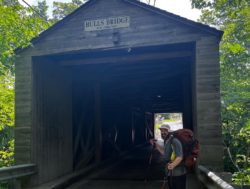 A short way beyond the bridge is a convenience store. We stopped for, surprise, ice cream, snacks and Gatorade.

After our break we tried to make it through the next 7 miles quickly. My friend Harrison was meeting us at a road crossing near Kent. I met Harrison in 2018 when I was doing a LASH and he thru hiked! We’d been planning this rendezvous since the beginning of this trip and all of us were excited it was about to happen.

It was, shocker, really hot again. We didn’t move very fast and had to take a long recovery break after a few miles. But then, miracle of miracles- it rained! It was a classic summer thunderstorm- it came on quickly and didn’t last long. We were on the edge of the storm rolling through the valley. 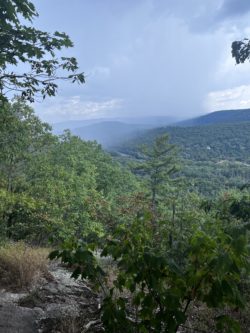 The whole time it rained and thundered we could see blue sky above us! I loved it. 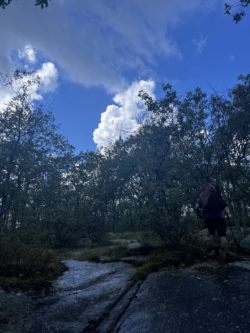 By the time we made it down to Harrison’s car, we were wet dogs!! He didn’t mind, he’s unfazed by hiker trash. He had his perfect dog, Jed, with him. All of us climbed into the car and headed back to his place. 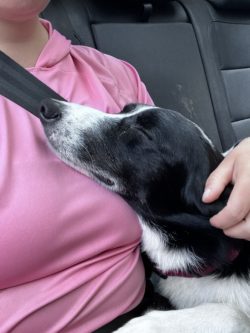 Harrison and his wife, Patsy, treated us like part of the family. Part of his family was even there for dinner! We had the best time with them. Harrison told us tons of stories from his thru hike and shared how positively its impacted his life since. It was great to hear about the “after” from someone who has had such a good experience. 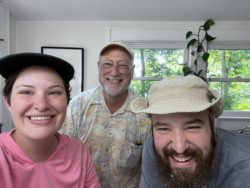 After a long, lazy morning had turned into a lazy afternoon (that included blackberry milkshakes!), Harrison took us back to the trail. We were sad to leave, but we needed to see the rest of Connecticut!

It was slightly less hot that day but we were still glad to be getting a late afternoon start. By the time we finished the first climb it had cooled down considerably and we wound up having a very pleasant evening.

We had our first major CT view at Caleb’s Peak 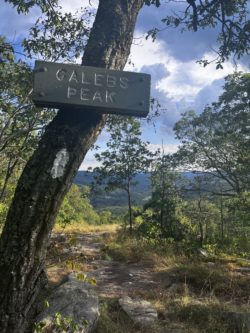 and then St John’s ledges. 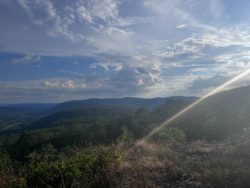 Getting down from the ledges was TOUGH. 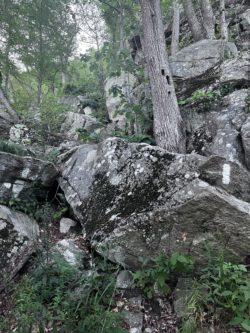 No perfectly placed stairs here. But we made it down. At the bottom we found ourselves back on the Housatonic. We had the nicest sunset walk to the shelter. 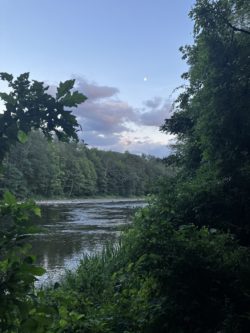 We got in around dusk. We got set up and ate dinner in the dark. We could see the moon through the trees and hear the moving river.

The next morning we got up early and actually managed to get out of camp quickly. The water source at the shelter was dry so we had to go about a mile to the next one.

I know I said we could hear the river.. well the Housatonic has been horribly contaminated by years of a factory dumping waste into it. Now, the river bed has heavy metals and PCBs in it and you can’t drink the water or eat the fish. Awesome.

After getting water we cruised down the river a little longer, going through a few fields along the way. 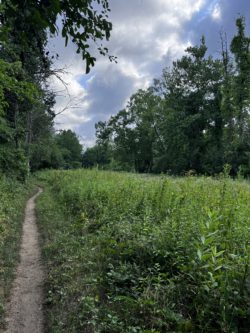 Late that afternoon, when we stopped for lunch, some clouds rolled in and threatened rain. We decided to set up our tent so we could be dry while we ate. I was able to check the weather and it looked like it might only rain for an hour or so.

We got set up and settled in. It cooled off considerably, so sitting in the tent was quite pleasant. It never rained very hard but it did drizzle on and off for a while. We kept pushing back when we wanted to leave… before we knew it, it was nap time! There’s nothing like a good rain nap.

We woke up around 6:30, only mildly disoriented, and packed up. We still had about 3 more miles we wanted to get done.

Walking the last 3 miles through the sunset was beautiful. We passed a view down to the private race track in the valley. 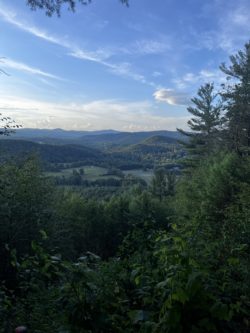 And we hit the 700 miles from Katahdin mark! 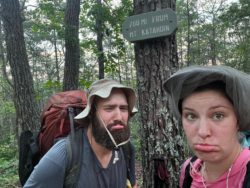 It’s hard to imagine this trip ending in just 700 miles. Despite the fact that we have walked all this way, I have a hard time believing that we have actually made it so far. Katahdin has been on our mind every day of this trip. Now that we can measure the end in a matter of weeks instead of months… it’s mind boggling and exciting and sad and alternately motivates us to speed up or slow down.

Anyways. We made it down to the campsite right at dusk. I pulled out my headlamp so I could get water and Pinky went to scout out a campsite. When I was done getting water I walked into the campsite, eyes peeled for Pinky. I didn’t spot him anywhere!

I started on round two of the circuit and began asking other campers if they’d seen a tall man with a beard come through… unfortunately there are a lot of tall bearded man hikers so I wasn’t super successful. But, they did point me to an area I had not explored yet.

I took a trail that was clearly trying not to be a trail anymore and found Pinky’s backpack, but no Pinky! Foodie was there and said Pinky had gone back out to look for me! I didn’t want to go back to wandering around in the dark so I stayed put and tried to call him on my phone. It worked! He returned and told me everything he passed was full, but Sushi Bat had shown him this secret overflow spot.

It was objectively not a great spot. There were a gazillion skeeters trying to eat us alive, it was overgrown, and had a bit of a slant. We thought longingly of our perfect nap spot earlier… But here we were. We set the tent up as quick as we could, then jumped in to eat a dinner of snacks in the dark, protected from the skeeter swarms.

After another sweaty night, we woke up early, ate breakfast in bed, and hit the trail. We climbed back down to the Housatonic and did some road walking. 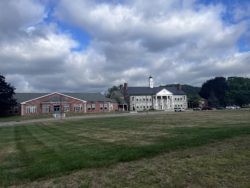 Our first water source was a spigot on the side of a building in the power station complex. The spigot was below an outdoor shower! We did not use the shower but some other hikers did! They said it was pretty refreshing.

After a longer than anticipated break we crossed the Housatonic and found ourselves next to some Bougie houses! 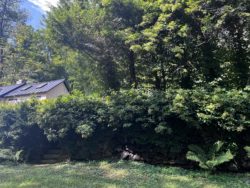 Then, we were at Great Falls! They were amazingly loud and beautiful. We spent about five minutes standing in the middle of the trail saying “But we *could* stay and swim all afternoon…” except the river is full of pollution. Sadly, we moved on. 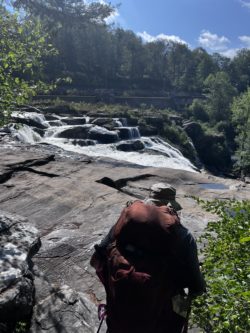 We climbed over something, hit 1500 miles! 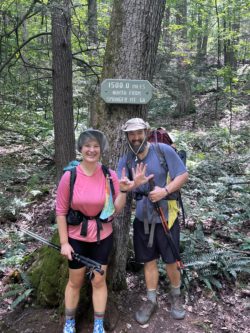 Then got back on a road walk. This time we got “spooky water”- water from a spigot literally in the middle of a cemetery next to the trail! It was again a super hot day so we took a long break in the shade to eat and drink our spooky water. We were joined by Foodie and had a lovely time.

When we couldn’t put it off any longer we packed up and began the climb up Lion’s Head and Bear Mountain. Our momentum came to an abrupt stop when we got to a parking lot at the bottom with a bunch of SOBOs gathered around coolers full of cold sodas. We always brake for cold sodas!

Lion’s Head was definitely a steeper climb, especially right at the end. We made it up with Foodie right with us. 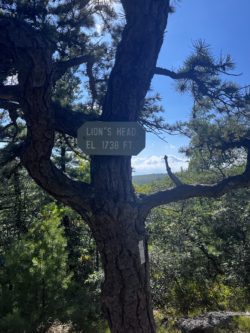 The mountain chilled out for a bit after that. We took a quick break at a shelter and Foodie blasted past us. I wanted to get over Bear Mountain before it got dark since it looked steep on the way down and I anticipated rocks. We managed to make it to the summit by 6:30, perfect.

The climb up was much chiller than expected. It was big flat rock slabs with some views above the trees to the peaks around us. Pinky kept thinking we were at the top, but I knew Connecticut wouldn’t keep us guessing, there would be a sign.

Not only was there a sign, there was a giant rock pile! The rock pile was built in 1885 to commemorate it as the highest peak in Connecticut. 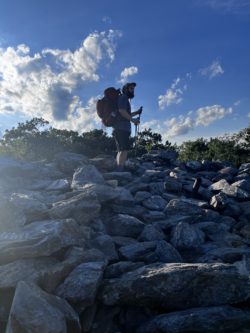 Standing on top of the rock pile gave us pretty incredible views. It was a gorgeous time of day to be up there. 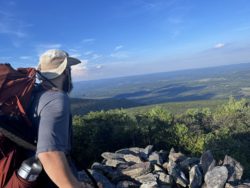 After we’d looked our fill, we began the Steep descent. I had to sit on my butt and scoot a few times! Pinky made many unhappy noises. We were glad it wasn’t dark yet. 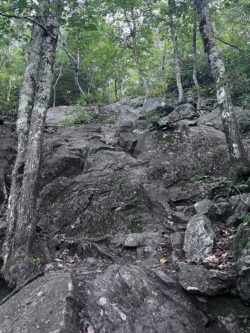 Part way down we crossed the border into Massachusetts!!! What a dramatic entry! 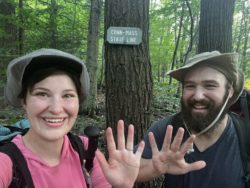 We said goodbye to Connecticut, grateful for the beautiful introduction to New England.