We woke up to a beautiful morning with the sun shining over Fontana Lake. 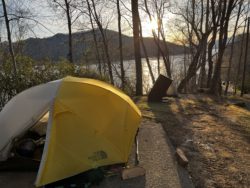 We crossed the dam and nervously eyed the ridge we were about to start climbing. 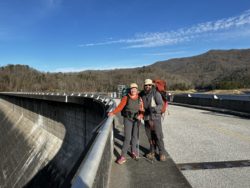 Right after we dropped our permits in the box at the entrance to the park we passed a very nice gentleman collecting data. He was counting things like flowers and buds to track seasonal changes. He told us the flower we’d been obsessed with the day before is called trillium! We chatted with him for like 10 mins. So fun!!

The climb was slightly less fun. Ok, parts were fun, but most parts were really hard. We basically climbed for 11 miles. We are definitely feeling stronger these days, but that means we get like a mile of feeling great followed by a mile of feeling like trash, on repeat.

The first highlight was Shuckstack fire tower. We dropped the packs and walked “for free” up the 0.2 or whatever to the tower. The tower itself is *sketchy.* We found Ketchup making himself a cup of coffee before he went up, because if he was going to die up there he wanted to do it with a cup of coffee as his last drink. He told us if he did die to “leave no trace” of him! After we caught our breath we climbed up, and we were so glad we did! 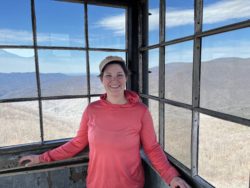 The view was fantastic! The most unsettling part, aside from the decaying floor, was seeing some smoke in the distance that might have been forest fires. It was cold and a little scary up there so we didn’t stay too long.. plus we were hungry. We went all the way back down and had a leisurely lunch with Oats.

Then we climbed some more. The second, even more magical, highlight came when we summited Doe Knob. There were millions upon millions of tiny white flowers covering every square inch of the forest floor. It looked like a snowy white blanket that went on for miles. It was truly magical, like something out of a fairy tale. 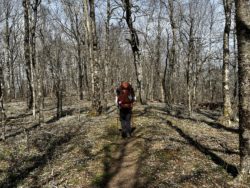 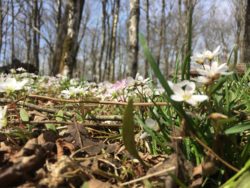 We also came across a really old and gnarly looking tree, big enough to climb into! 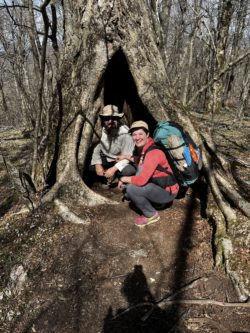 We finally made it to Mollies Ridge shelter and set up our tent, still surrounded by the tiny white flowers! We ate dinner with a really funny group of folks and Bryce played 3 rounds of chess with Brick.

Around 3am the wind picked up.. and we really felt it since we had not placed our tent in the optimal orientation. When we finally got out in the morning we found the weather to be completely different than the day before. Not only was it windy but it was also cold and overcast. Plus, all the little flowers had closed up!

We knew rain was in the forecast, but didn’t know exactly when it was going to start. We managed to get a pretty early start and seriously cruised our way to Spence Field shelter, 6 miles away. Mirage actually arrived first, around 11:15, even though Bryce was ahead…. Just as Mirage was starting to get really worried Bryce strolled in, he’d missed the turn! As we were eating lunch it started to rain, and the temperature kept dropping. We went back and forth for a good while about whether to stay or go and… landed on staying.

By 12:30 we were cozied up in our sleeping bags in the shelter, and we did not budge except to pee and eventually make dinner. We spent the afternoon extremely comfortably- we read, we played chess, we snacked and drank tea. We watched cold, wet people roll in all afternoon and into the evening. We felt a little guilty for not hiking, and for being warm and dry when everyone else was miserable, but not too guilty…

The next morning we woke up to fog covering the ridge, but no rain and significantly warmer. We got our earliest start yet- 8AM!! We felt ready to hike after the short, lazy day, and once again crushed our first 6 miles. We were sad that Rocky Top and Thunderhead were socked in, both mountains have big open views, but the clouds cleared by late afternoon. 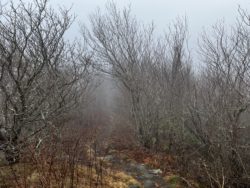 The last 2 miles of the day were just beautiful. We got up above 5000 feet and the composition of the forest changed. We had evergreen trees that made the air smell like Christmas, deep green moss covering everything, and our first views of Clingmans Dome! We finished our longest day so far, 13.7 miles, in high spirits. 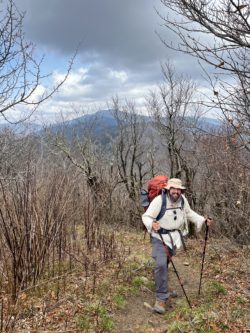 We also made it to the shelter without getting rained on! The rain kindly held off until we all got into our sleeping bags. But when it started, boy, was it a good storm. There was thunder and lightning and heavy rain most of the night. We were grateful for our spot in the shelter, and pretty pleased to be on the top bunk under the semi transparent ceiling so we could see some spooky lightning.

Once again we had a dry morning, but still cold. We had an absolutely beautiful 2 mile climb up to Clingmans Dome. The sun shining through the wet misty forest was just magical.

We had yet another treat waiting for us on top of Clingmans. The road that leads to it was closed for an extra week, so the masses were not present. We actually had the observation tower completely to ourselves AND we had a clear amazing view! 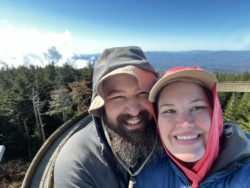 Clingmans Dome is the tallest point on the AT at 6,612 feet. Our favorite part about the view was that we could see back to Standing Indian mountain. We summited Standing Indian on March 27, our anniversary, and the first day after our last zero day. Since then we had hiked every day for 13 days and had covered 115 miles! It was very cool to be able literally see our progress like that. 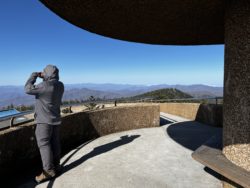 After many pictures and sitting for a few moments to take it all in, we headed back down and began the remaining 7 miles to Newfound Gap. We had a shuttle coming at 3pm to take us down to Gatlinburg. Getting there in time required us to hike pretty quickly and we didn’t take a lunch break, so we got pretty hungry. BUT we made it by 2:20!!! In the last 0.1 mile it actually started *snowing* on us a bit, which was wild because the sun was shining and it was definitely closer to 50 degrees than 30 degrees.

Our super nice shuttle driver (thanks Nate!) dropped us off at the NOC and we began the process of finding a hotel room. Turns out this is a very popular weekend to be in Gatlinburg, there are several conventions plus tons of hikers came off trail to avoid the snow storm like us. We wound up in the same hotel as some friends, breakfast this morning was just like being on trail.

Laundry was a little complicated this time around. Our hotel doesn’t have laundry, but the guy who checked us in directed us to the Gatlinburg Inn. We called and they confirmed that they let any hikers use their one washer and dryer. We failed to prioritize laundry during our last two town stops and wound up doing it very late, we wanted to change that this time around. After some debate we decided to do laundry after our shower and before dinner. Thanks to the generosity of fellow hiker, Night Owl, we were able to eat dinner while our laundry was running. Hikers helping other hikers is a special hallmark of this community.

It was so wonderful sleeping in a real bed last night that we have mostly stayed in bed all day today. We left the room for breakfast this morning and to trek to the grocery store this afternoon. The grocery store errand was made possible by Gatlinburgs surprisingly lovely free public trolley system. We had the most delightful drivers and were easily able to navigate to and from the Food City, without having to walk the 2.5 miles.

We have one more zero day ahead of us… and no plans to do anything. We will return to the trail on Sunday. Hopefully we won’t have to walk through too much snow when we get there! At least it should be warm…ish.