Okay, I know the title says Bear Edition, but there are no bear pictures this week, only bear stories. I promise they are good ones though!

Short day today! It was cold and misty this morning after a rainy night, but when we left the shelter it was burning off. We were a little tired and dinged up after the day we had yesterday, so we only went about six miles, but they were beautiful, beautiful miles. Easy ups and easy downs. I kept stopping to look around and listen, and just soak up the beautiful sunny day. 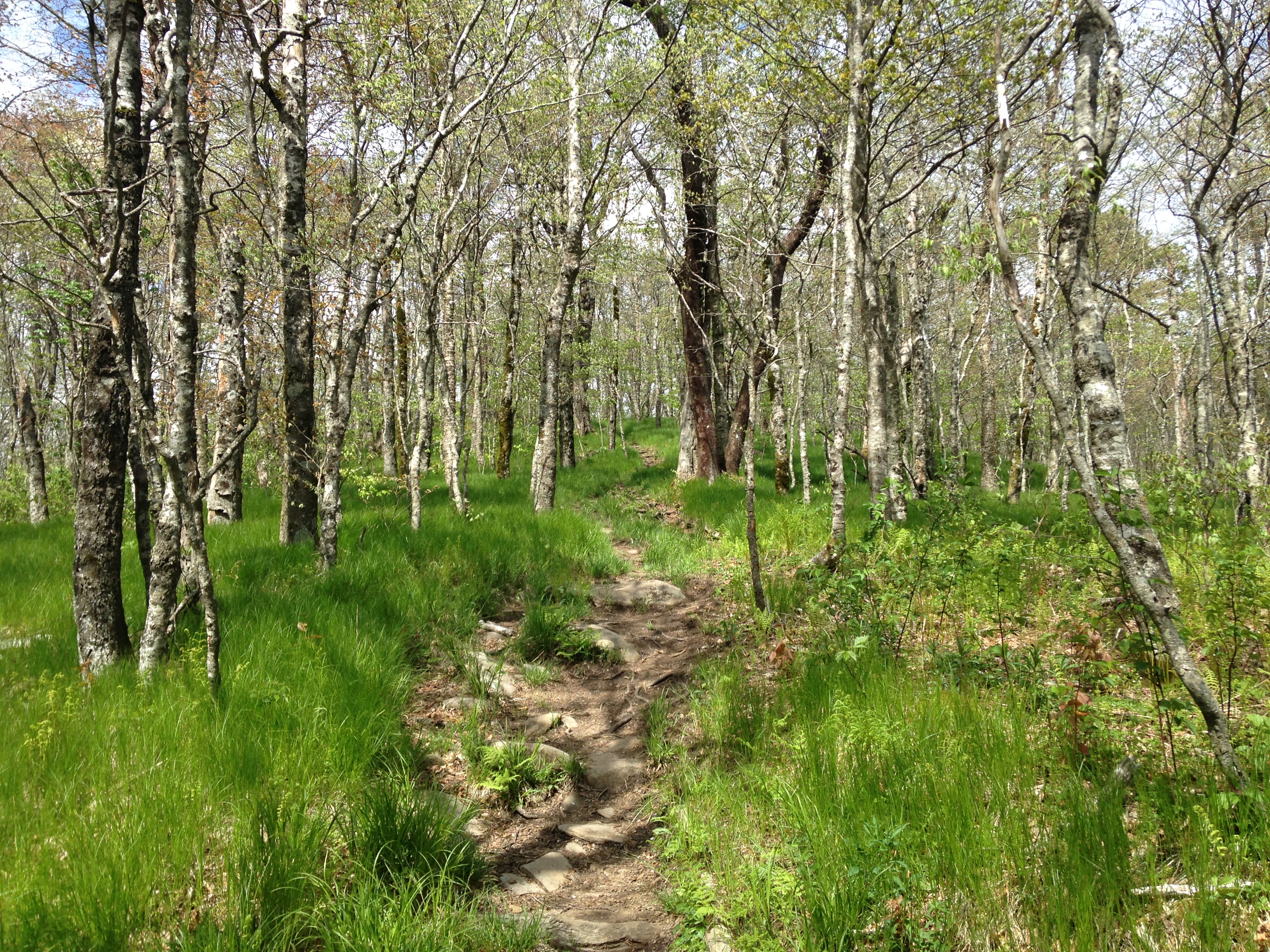 How pretty is this place? Hint: Super pretty.

When we got to Spence Field Shelter, the rangers were there building an electric barrier around the shelter because there was a bear attack here a few days ago. Not many people were allowed to stay, but Recon has a badly bruised heel so they let us sleep, as well as two young section hikers who didn’t get the memo, and an older thru-hiker who came in too late to get to another shelter before dark.

About two minutes away from the shelter, as I was coming up to it from the trail, I looked to my right and there, about 75 feet off the trail, was a huge, beautiful black bear, just standing under the trees. I got a picture with my camera, but I’ll have to wait to upload it until I get home. Turns out he was probably the one who made the attack: the rangers tranquilized him a only few minutes after I went by and made the ID, so I took the last picture ever of that bear. I will have to wait a little while to make this post so they can get their press release out, but I’m running behind anyway so I guess it won’t matter.

As of the time of this post the DNA hasn’t been confirmed so I am editing out some of the information for later.

He took a good look at me and then turned away: he was clearly not concerned about me at all. He looked like a beautiful, healthy animal, the rangers said he was about 20 years old and 400 pounds, but I guess his teeth were going bad and that can cause the sort of campsite pillaging that led to the attack. I feel pretty bad about the bear, but it may be for the best. Without good teeth the rest of his life was going to be a hard struggle.

Anyway, all things considered we had a great night at the shelter. The rangers were kind, hardworking guys who do great work keeping the park safe and healthy, and I’m glad I got to meet them. Rangers Ryan, Greg, Brandon, and (I am delighted by this) Ranger Rick, you all are good people. Keep on keeping on, you all rock.

Not a bad day’s hiking! Beautiful weather took us up to Rocky Top for amazing views, across Thunderhead Mountain, and then a steep descent before the toughest climb of the day, up Derrick Knob. I was pretty hot and out of breath by the top. The rest of the day’s walk was not too difficult. I passed several day hikers who all told me, “Oh, you still have Silers Bald coming up, that’s tough,” but I didn’t think it was bad at all. I passed Recon on the way to Silers Bald Shelter and he was just crawling, because his heel was so painful. I saw Silverback and Robyn at Silers Bald Shelter, but decided to keep to the original plan and hike on the extra 1.7 miles to Double Spring Gap Shelter. I got there, set up my tent, and then actually hiked back over Silers bald to the shelter there to check on Recon because I was worried about him. I found him with Silver and Robyn, planning on getting off the trail at Clingmans Dome the next day to rest up. 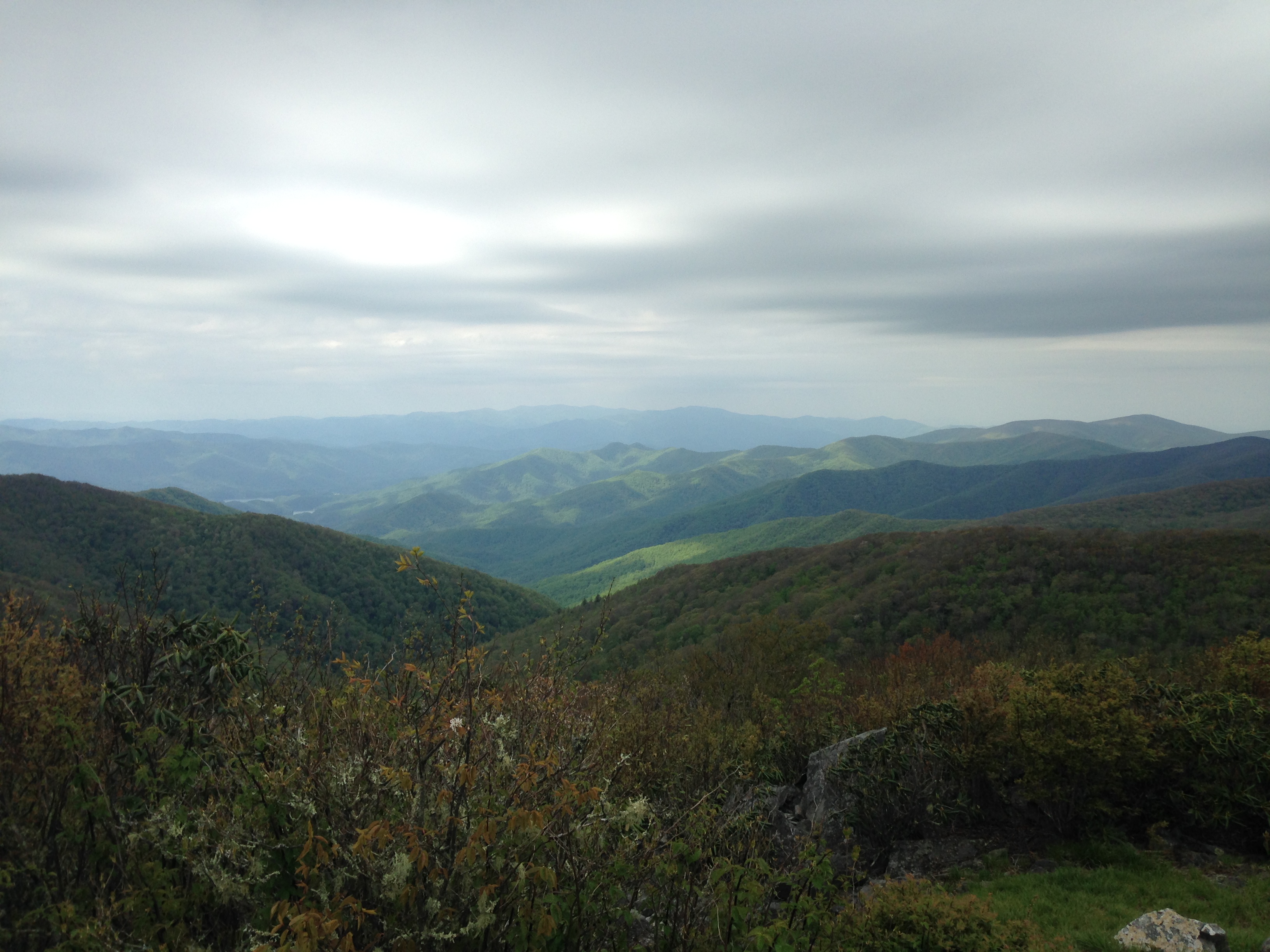 The views from Rocky Top.

Reassured, I hiked back over the bald again (it really is a nice bit of trail) and went back to my tent. I made a quick dinner and watched a deer stroll through the camp, totally unconcerned about the hikers. It was nice but the temperature was dropping quickly so I rolled into my sleeping bag and tried to go to sleep quickly.

It was SO DAMN COLD last night. I was doing sit-ups in my sleeping bag trying to keep it warm enough, and when I woke up in the morning I had to brush ice off my bag and the roof of my tent. There was frost on everything, and ice in the pine trees until after Clingmans Dome. As I hiked along in the morning little ice chips came raining down on me and the wind never stopped blowing. Freezing. 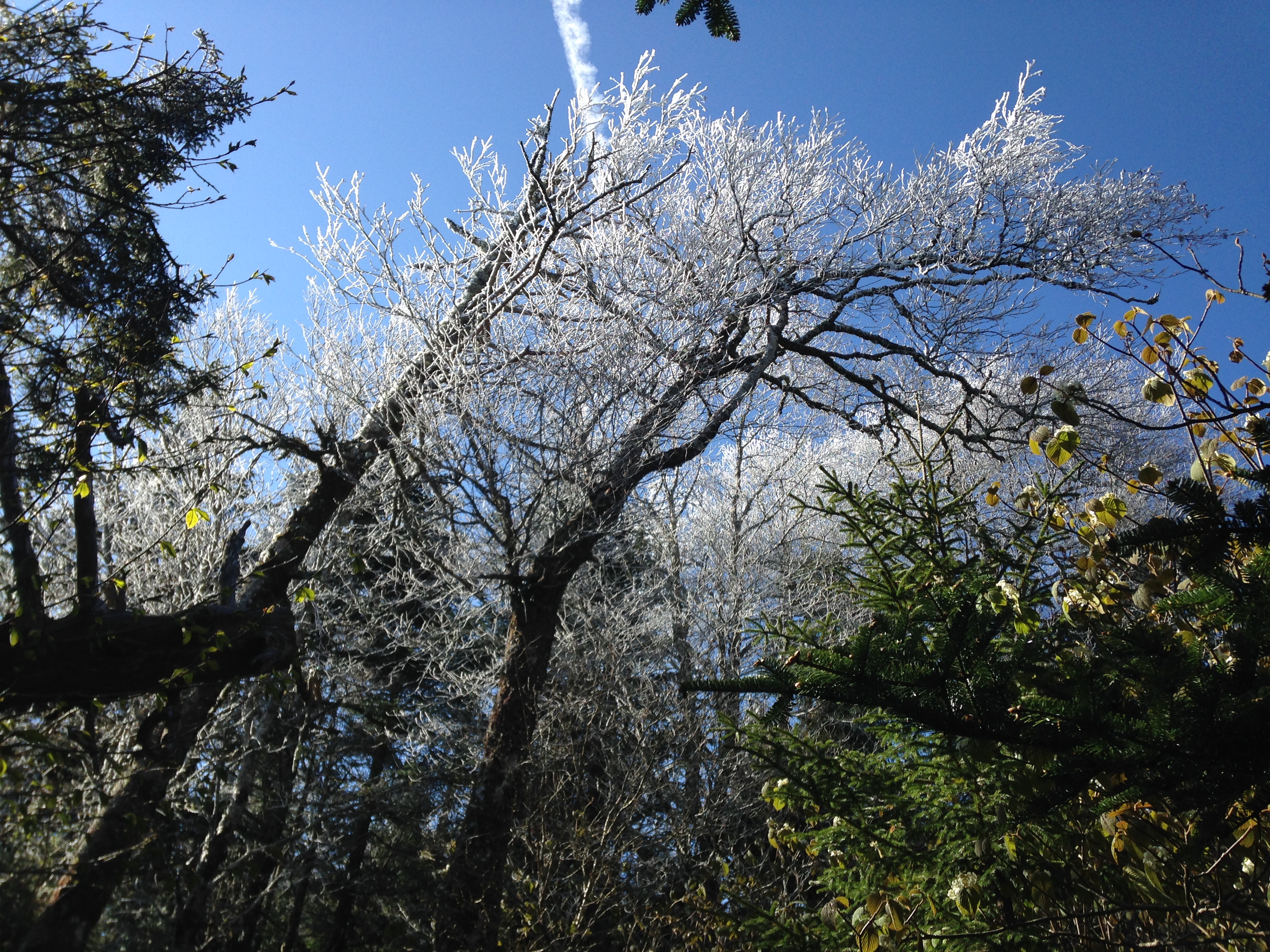 Ice on the pines. Just another May in the Smokies.

The climb up to Clingmans Dome felt easy, probably because I was hiking so fast to stay warm. I didn’t spend too long on the tower, even though the day was clear and you could see for miles, because the wind was just knocking me around up there. I waited at the trailhead for about an hour and a half, but Aly was the only one who showed up. She has been dealing with a head cold for a few days and had decided to get off the trail with Recon to see if a warm night inside would help.

When it got so cold I couldn’t sit still anymore, I took the trail north. Mt. Collins Shelter was an easy four mile stroll along, and I took it slow because there wasn’t a lot of urgency. I got there by 2:30 and my day was over. Tom and Robyn caught up there and we lay in the sun for as long as it lasted, chatting with some others. One of the other hikers here thru-hiked the AT in 2012 and remembered Great Barrington, and we had a nice time talking about the town.

After I ate dinner, though, things got a little dicey. Maybe some of my food didn’t agree with me because I felt awful all night: just achey and queasy.

This morning when I woke up I still felt awful. I didn’t think I could keep anything down, so I hiked to Newfound Gap five miles away on an empty stomach, and Silverback, Robyn and I met up with Billy there (he got off the trail at Fontana Dam). Billy gave us a ride into Gatlinburg, which appears to be a town built and maintained entirely for tourists. It seemed like a nice drive but I was mostly paying attention to how sick I felt. Met up with Recon and Aly at the Microtel in town and I decided to get a room and stay the night. Felt queasy all day, slept a fair amount. Tried to eat pizza for dinner but that was a mistake. I’m just glad I’m not cold.

Many thanks to Billy for coming so far out of his way to get us. Going to go to bed now, hoping I wake up better tomorrow.

This is my first real bed since starting. Heaven.

I felt much, much better this morning when I woke up. Aly and I got some coffee, and I ate pretty much everything in sight, trying to make up my calorie deficit from yesterday. It was hard to leave the hotel. We sat in Recon’s room watching tv until after noon, and then hitched a ride back to Newfound Gap. When a truck finally pulled over to pick us up, I couldn’t believe it. It was Brandon, one of the rangers from Spence Field. He drove us twenty minutes out of town to our destination, and then Aly and I watched as he turned his truck around and drove back the way he came. I tell you what, the rangers here are some of the nicest damn people I have ever met. What a favor.

We made good time for such a late start, did a little over ten and a half miles to the shelter. The trail today had some really notable views, in particular from Charlie’s Bunion, the absolute worst name for one of the most beautiful spots on the trail. You can see the whole valley sweeping out below you, and the scale is hard to wrap your head around. 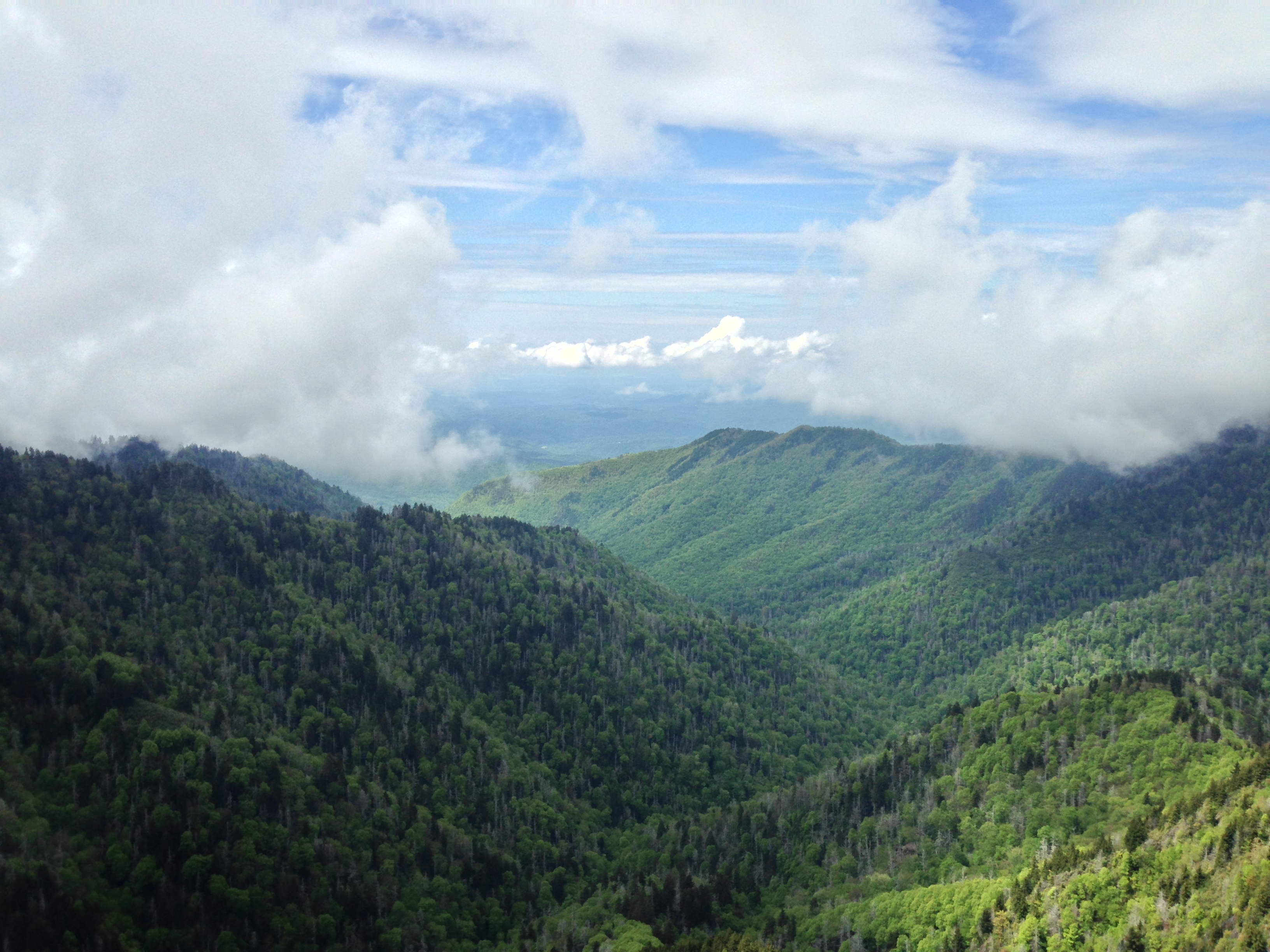 The hiking was rocky today, lots of loose stones on the path, and my feet were feeling it by the time we finished. Definitely an ibuprofen night.

When we hit the shelter, and got busy making dinner, Aly suddenly and very calmly said, “Oh shit, there’s a bear right there.” I looked up and sure enough, a mid-sized bear was ambling toward us. First it checked out the bear cables and then it turned toward the shelter, where all of our food was sitting out, aromatically cooking, one day out of a full resupply. The loot would not have been insignificant for that bear, and in that moment it was game on, bear vs. Xena in Abearican Gladiator, and I was not going to let that bear get any of my ramen. I grabbed my trekking poles, banging them together and yelling at the bear to get out, with Aly and two other hikers joining in. On a scale of one to ten, with ten being effectively terrified, I would put that bear at a three: not at all impressed by us, but also convinced we probably weren’t worth it. It turned and walked away, very, very slowly, just so we would know that this was its own idea, of course. It made a wide circle around the shelter and then disappeared, but I am sleeping with my trekking poles tonight.

After it wandered off behind the shelter, the third hiker, Creek Dancer, came back down the path; she had probably walked right past our bear without seeing it.

I wanted to make a note in the shelter log, since I understand park service employees check those to see how bear activity is at the shelters, but the log seems to be missing. Oh well, the next time I have service, I will call it in.

As a note, I did call in the bear’s activity. There were several notes in other trail journals, especially the one in Cosby Knob Shelter where we spent the next night, about a bear with problematic behavior at Pecks Corner, including making a bluff charge at a hiker. Hopefully the park service can relocate the animal. I’m not sure what they might do in those situations.