Hey everyone!  For those of you who have been asking about mailing letters, the next place I’ll be checking for mail is Damascus, VA.  If you have never sent a letter to a thru-hiker before, address it like this:

And then, somewhere on the front, write “hold for AT hiker, estimated dates June 6-12.”  I love getting postcards and letters!  Just no food or items please, I appreciate the thought but space in my pack is tight.  Okay, that said, onwards!

Today I found out why this place is called the Smokies, since I was walking inside a cloud for most of the afternoon. 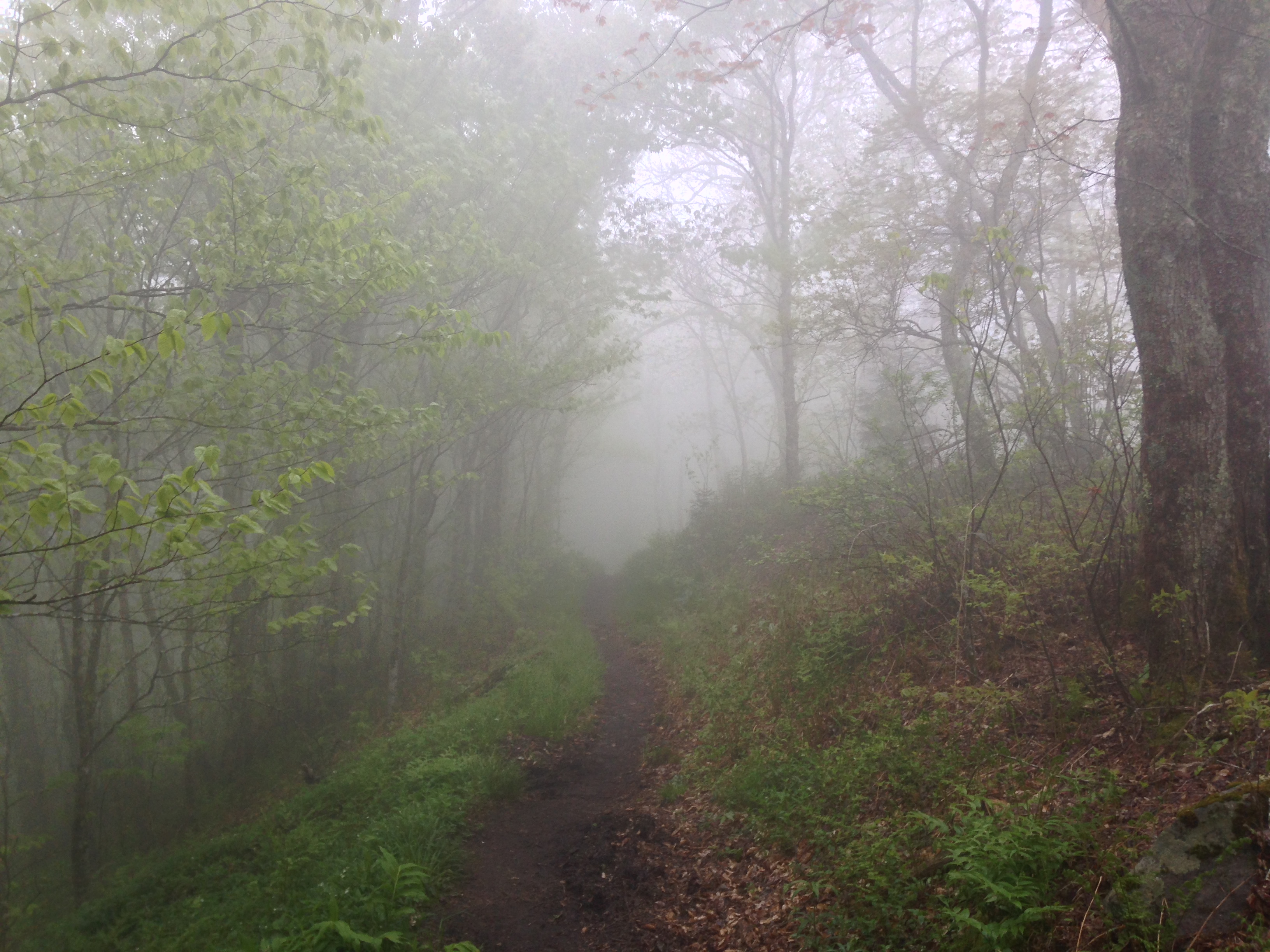 Because it looks smoky, see? Ah, you get it.

Small sections of the trail were beautiful. I walked down pine-lined avenues, with the forest floor on either side carpeted with emerald colored moss, and over ridge lines where the clouds lifted just long enough to let me see sun on the neighboring mountains, while I stayed wrapped in fog. I ate lunch in the sunshine with Creek Dancer while she told me about all the cool places she hiked. The rest of it though. The rest of it. Was. My. NEMESIS. Loose rocks all over the trail. I barely looked up from my feet all day, and they were well tenderized by the time I rolled into the shelter. Hey, if the terrain percentages stay steady for the length of the trail, there’s probably only 600 miles or so of similar terrain to go.

At one point my feet were so tired that I just fell over. No excuses, I didn’t trip over anything. One minute I was walking down a ridge line and the next minute I was face down in mulch two feet down the hill asking myself out loud, “how did that happen?!” I’m still not too sure, but I am inclined to blame the total beat down my feet had been receiving for almost ten straight miles.

Heard from Recon tonight, his bruised heel was more serious than he thought, and he is off the trail for at least a week. We miss him already. He has to catch up! This tramily isn’t whole without him.

Wow am I tired. The Smokies are officially behind me now though!

Had a good conversation at the shelter this morning with a guy named Mountain Man, who started his Sobo thru in August from Katahdin, and hiked through the winter. That is CRAZY. He must be tough as nails. 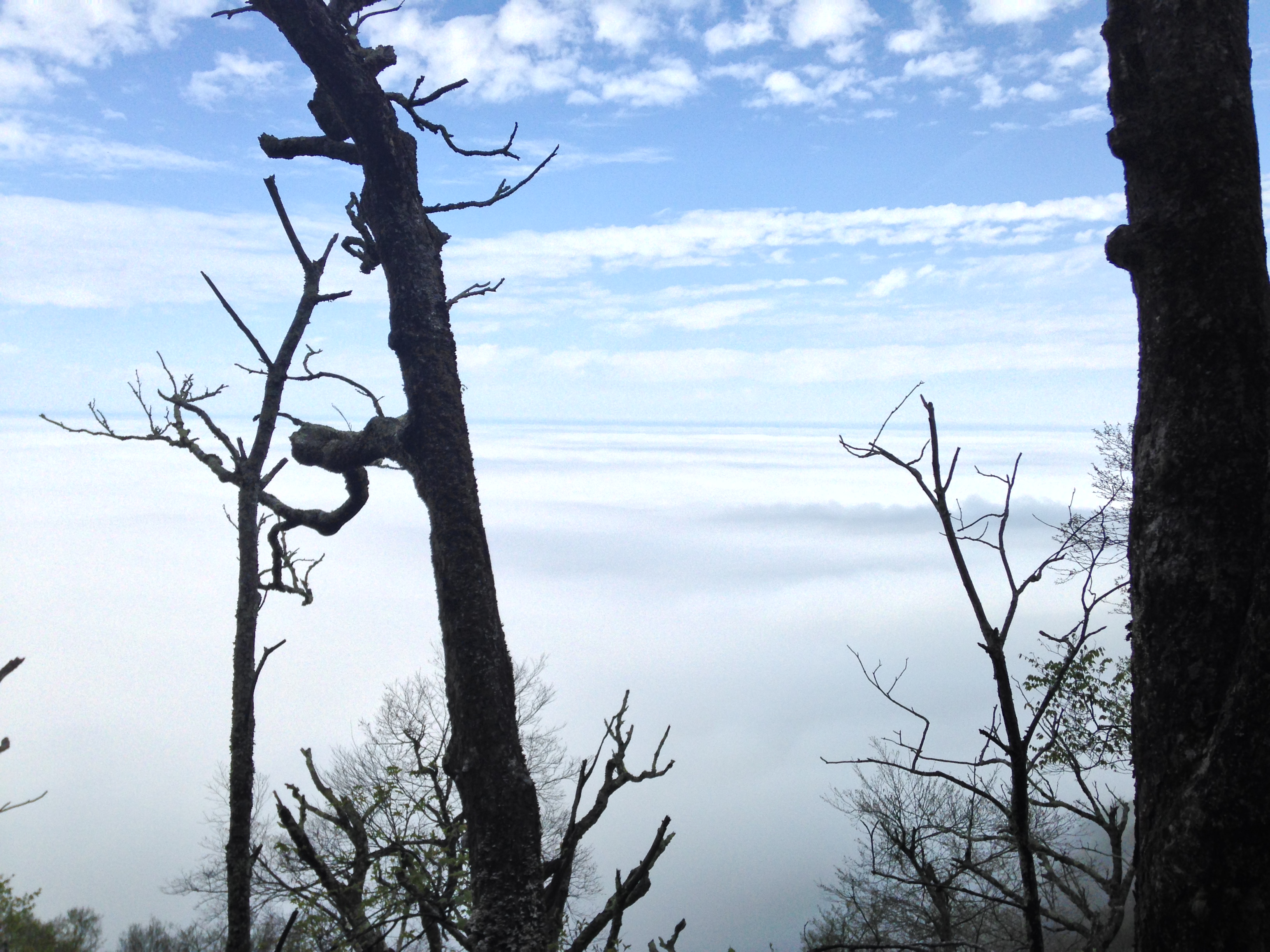 This was my favorite view today. I’m on top of the clouds!

Lots of rocky downhill to start my day, and I wound down to Davenport Gap with Aly (who is going by Shade now! Just need to get Robyn her trail name and we are good) a little bit before one to find some trail magic waiting for us. One of the volunteers for the NPS was waiting with a cooler full of drinks, bags of chips, and chocolate, as well as a bag to take our trash away. What a nice guy! He waits there for an hour and a half every day, and he confirmed what everyone was saying, that this year’s class of thru-hikers has been enormous, but we seem to be dwindling now. I like traveling behind the bubble. It’s not so crowded, so we’re not creating as much of a strain on the trail or the shelter system.

The rocks did a pretty good job pummeling my feet to sad little bits again today. Aly and I stopped at Standing Bear Farm for a hot minute to pick up one or two resupply items and say goodbye to Creek Dancer, who gave us some of her food before she hit the road. Then it was time for the last two and a half miles uphill to the campsite. It was a relief to be going up instead of down, and the path was smooth instead of rocky, but I was really done by the time we got to the camp. I think maybe it’s because I’ve picked up Shade’s cold. My throat is sore and swollen and I’m getting tired very easily. Plus, you know, twenty five miles of rocks.

I had a haaard time getting up this morning. Slept until 8:00, almost two hours later than usual, and didn’t get on the trail until almost ten.

Once I started hiking, that was hard too. My legs felt like water and my head was not in the game. Being sick takes a lot of fun out of hiking.

Had lunch at the first shelter. Turned on to the shelter path and a couple of college kids told me, “that’s not the AT, you know,” which is the kind of thing that’s hard for me not to be snarky back to. Met a thru-hiker named Moose there, who told me there’s a bubble of about thirty hikers behind us, the hard-partying type. I would like to stay ahead of that group if possible, I’m not really into that kind of hiking atmosphere.

Went over two balds today, Snowbird Mountain and Max Patch. Snowbird had some sunlight and views, but by the time I got to Max Patch I was inside a cloud and the world looked haunted. Everything was misty and hard to see, and, a few minutes after I hit the summit, also very wet, as the skies opened up on me for the first real rain I’ve been in since I started the AT. 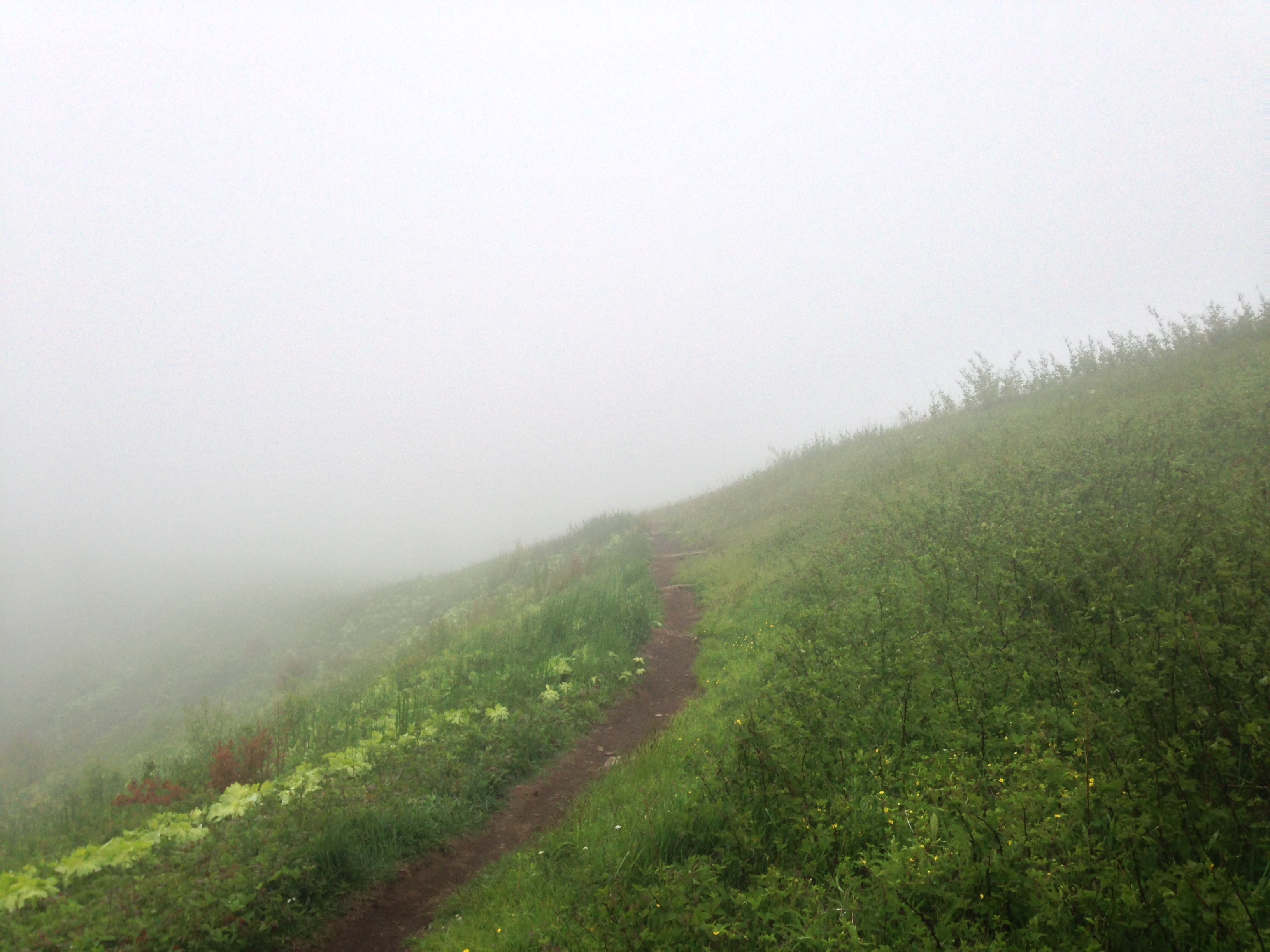 No views from Max Patch today!

I got to the shelter absolutely muddy and soaked through, had dinner with Shade and Moose, who caught up to me right as I got in, and another girl named Joanna (I think). Glad to be in here warm and dry, and not out there still being rained on.

Aly and I pushed 18 miles today, and I think fourteen of them were through two or three inches of mud. It was sort of fun, honestly, and very comfortable for our feet, so we went fast, and were in Hot Springs by five-ish after a later start than usual. I managed not to fall over in the soup at all, but honestly I’m not sure it made any difference, at least from the knees down. The backs of our legs were completely plastered with mud and our shoes might not ever be the same. 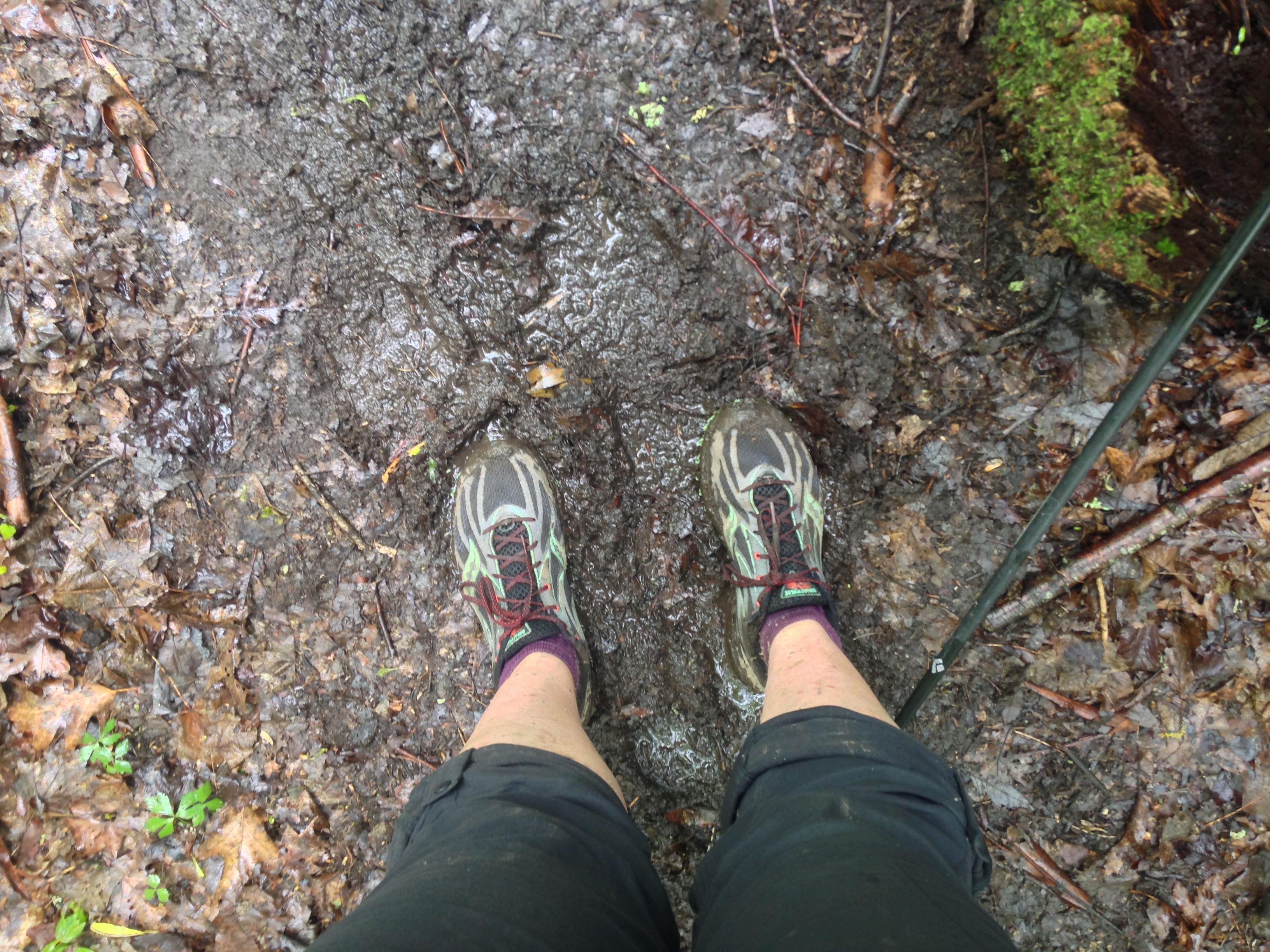 This was early on. Later my shoes were just mud balls.

Silver and Robyn are somewhere in this town, apparently, but we can’t locate them because they don’t have an international calling plan on their phone. We want to find our tramily again! Anyway, Hot Springs marked the end of our longest day yet, so Aly and I celebrated at the Spring Creek Tavern with enough food to feed six normal people, and then trundled back to the hostel to try and digest, sort of like a python that has just eaten an entire deer, except I know I’ll still be hungry in the morning. Tomorrow: finding our Canadians, laundry, resupply, and eleven miles to the next shelter. I wonder if I can wash my sneakers…

This illness I’ve picked up has moved into my throat and is staying there. I hope it doesn’t develop into something horrible like bronchitis, but I don’t think it will. I bet in two or three days I’ll be back on track.

Woke up this morning at the Laughing Heart Hostel feeling so refreshed and happy (although still sick). That place is wonderful! Thank you, Arnery, for taking such good care of us. When I got there yesterday I didn’t even want to go inside because I basically looked like that mud monster from Spirited Away, and I left feeling like a new person. 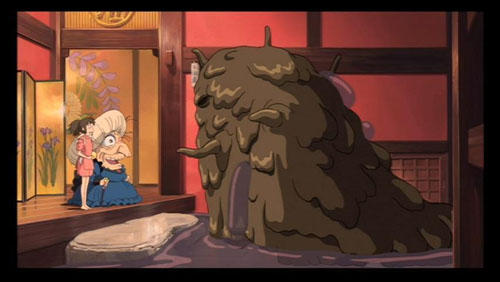 Shade and I found Silver and Robyn chilling out in front of the outfitters, we had another enormous meal at the Smoky Mountain Diner, and picked up our resupply before hitting the trail around 1:30. That was a pretty late start for an eleven mile day! I think I will try not to do that again. There were three mountains in between start and finish, and the second one just went on and on. I definitely trudged it.

We walked a lot through areas affected by the Silvermine wildfires, which were burning when we started the trail a month ago. They are out now, but certain areas are deeply scarred. It’s strange to walk through a burned out area and see a few trees that look untouched in the middle of it, or to be able to tell to the inch where a fire stopped spreading because of the brown line in the moss. The whole afternoon it reeked of charred wood, still. At first I thought it reminded of a wood burning stove but eventually it just made my throat ache worse than usual when I breathed in. 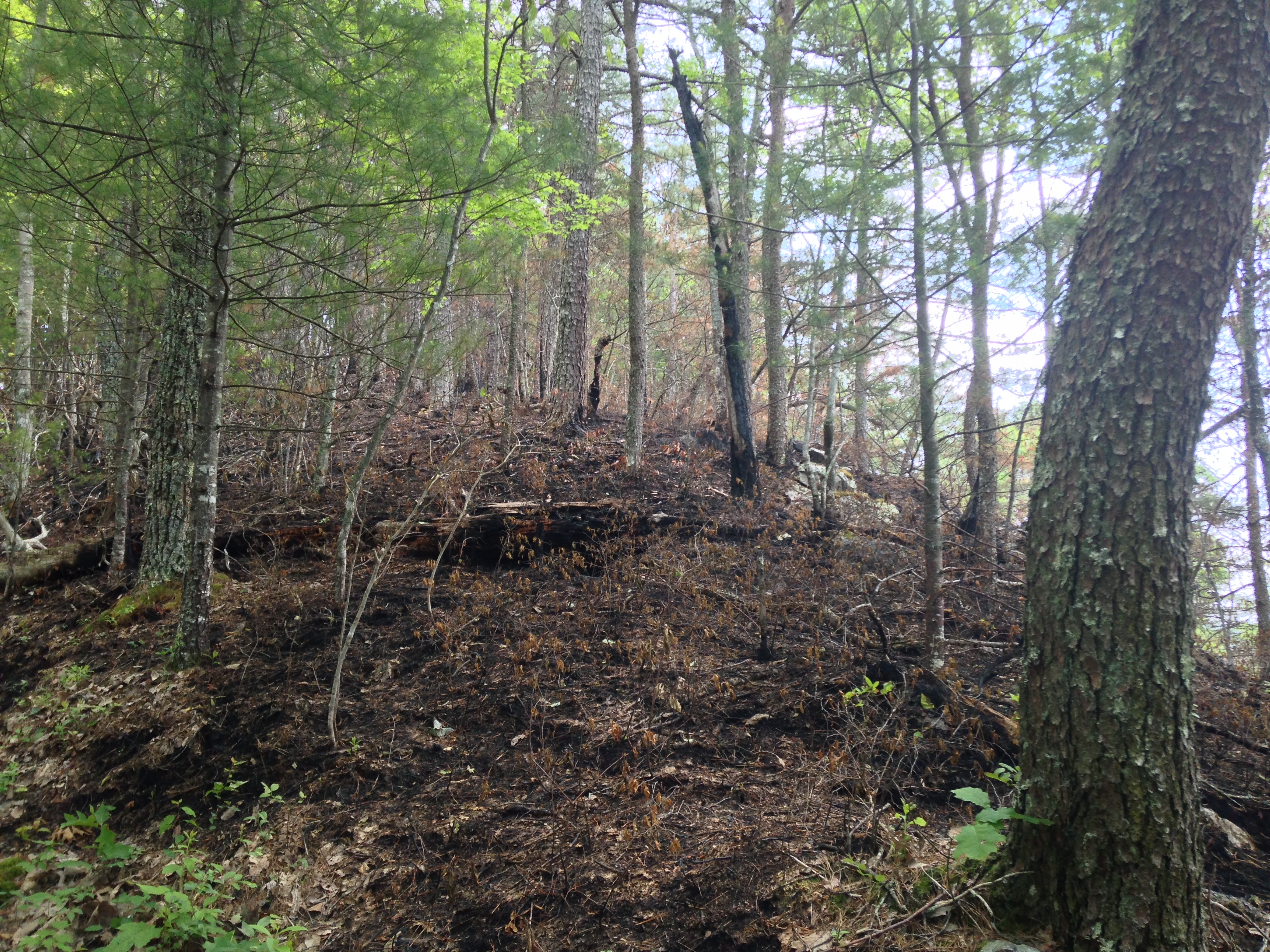 Some burn damage on the trail.

Eventually we passed out of the scarred zones, down a gravel road through a field, and into some really lovely woodlands. Everything was green and beautiful, with shafts of sunlight striking down through the trees. Even though I was dead tired at this point I still enjoyed the scenery, and when I got into camp there were a lot of familiar faces waiting there. Robyn and Silver, Baloo and Tao (two thru hikers I met in the Smokies), Alex, who keeps popping up unexpectedly, ever since I first met him on Hawk Mountain (I always think he is way ahead of us), and a few others. Sunshine and Tuck, two women I met this morning, came into camp slightly after I did and said they saw seven bears in the last mile. I didn’t see them at all!! They were all mothers with cubs, though, so maybe that’s best.

As always, my feet hurt, and as always, I love it out here.