Not nauseous anymore, but still zero appetite. I didn’t do much today, just stayed in the shade with a book and napped a lot.

Today my appetite started coming back. I played a lot of chess with Panda and Prof, and lost a lot of chess against both of them. I’m getting better though.

I probably could have left Damascus today, but instead I hunkered down and ate so many calories. Picture me, if you will, sitting on a sofa, eyes glazed, mechanically tucking away a pint of Ben and Jerry’s, plus, during the course of the day a hearty breakfast, a pizza, several cans of soda, cheese crackers, a chocolate bar, a burrito, chips, and two packets of fruit snacks that Atman gave me.

I had some catching up to do, calorie-wise.

Waffles decided today to stay another week in Damascus with her friend Lawdog, but tomorrow I have got to get out of here. I’ve got catching up to do trail-wise, as well.

After ten days, an eighteen mile reintroduction to the trail was perhaps a little ambitious. But I was eager to start the task of catching up to my friends, so I went for it. And I didn’t want to waste any time getting started. I knew that if I hung around too long at Woodchuck’s I might give in to the temptation of “just one more lazy day,” and I was out of reasons to justify that, since I’m now in perfect health again. I said goodbye to Atman, Waffles, and Lawdog, and Woodchuck was gracious enough to drive me out to Straight Branch, where I got off the trail after my first, failed attempt to hike out, and I was away. I admit, I sort of half-jokingly felt like I was like a raccoon that had been caught in one of those have-a-heart traps and that was being driven a distance away from the site of capture so it can’t find its way back, haha. Released back into the wild!

In all seriousness though, Woodchuck is one of those incredible souls who spend their time helping to make the trail possible for hikers by running a hostel that is welcoming, clean, and affordable, and I would have been miserable during my recuperation without his sincere kindness. Listen, future hiker hopefuls: when you hit Damascus, go to Woodchuck Hostel. The company is great, the breakfast is good, and the only danger is that you might not want to leave.

Okay, anyway, today was sort of a mixed bag, hiking-wise. I’d tell you it was hot and muggy, but I think we can all agree that that is going to be the default weather through August, probably. I don’t know if it was worse than usual or if I am just not used to the exertion after over a week off the trail, but I got heat rash almost immediately. And of course my clean feeling evaporated within about a minute. The trail itself wasn’t too bad. I got to watch an orb weaver build a pretty amazing web across the trail, and even though it was absolutely a lost cause on her part, I still went way out of my way around her so I wouldn’t be the one to destroy her web. But I can tell I’ve lost a bit of endurance, and I was really considering stopping at the second shelter, 12 miles in.

And then I opened the log book. And I saw so many messages from people I know, and want to see again. There were notes for me, too, from Shade and some of the boys, and it was like an instant power up. Tuck and Exterminator and Clarity all came into the shelter to stay for the night ( I told you I forgot some people at Woodchuck’s! They all left the day before I did and I found them again at Straight Branch this morning), but as soon as I saw those messages I knew I was sticking with my original plan to keep going another six miles, because I want my tramily back, damn it, and that’s not going to happen unless I burn some trail. And I want to see Aquaman and Centaur and Squatch and all the rest of that group again too. Thanks to Damascus, my trail community is so much bigger than it was.

Anyway, I left Lost Mountain Shelter with a full heart and chugged along for about two and a half hours. I passed through a cow pasture and stopped to rest against the stile on the far side. A cow walked up and gazed at me, chewing on some grass. “Hey, cow,” I said. She shook her head and walked away. I don’t seem too impressive to cows, I guess.

I covered another mile, and then things went a bit sideways. I was starting up the final climb to the top of Buzzard Knob and the summit of Whitetop Mountain, probably about a mile from the campsite, and a freaking thunderstorm rolled up. AGAIN. Always, always they find me when I’m in the worst possible spot. Ridge line? That was the scariest. So how about topping that with an exposed mountain summit at 5000 feet? No. Nope. No way. I started hiking over and turned to look over my shoulder at the giant line of thunderheads racing toward me and turned around and hightailed it back down the hill a bit, back to the trees at the edge of the bald. I put on my rain gear and hunkered down among some large boulders with what I’m sure was the same sort of attitude you see in a toddler who is determined to dig her heels in and not go where she is supposed to. My thought process was, in a sentence, “I am 100% uninterested in tempting death again with this thunderstorm, I don’t care if I sit here getting rained on until it is dark and I have to night hike the rest of the way.”

Which, of course, is pretty close to what happened. The storm let up while there was still some light left, (and check out this day’s end over the bald because it’s super nice), 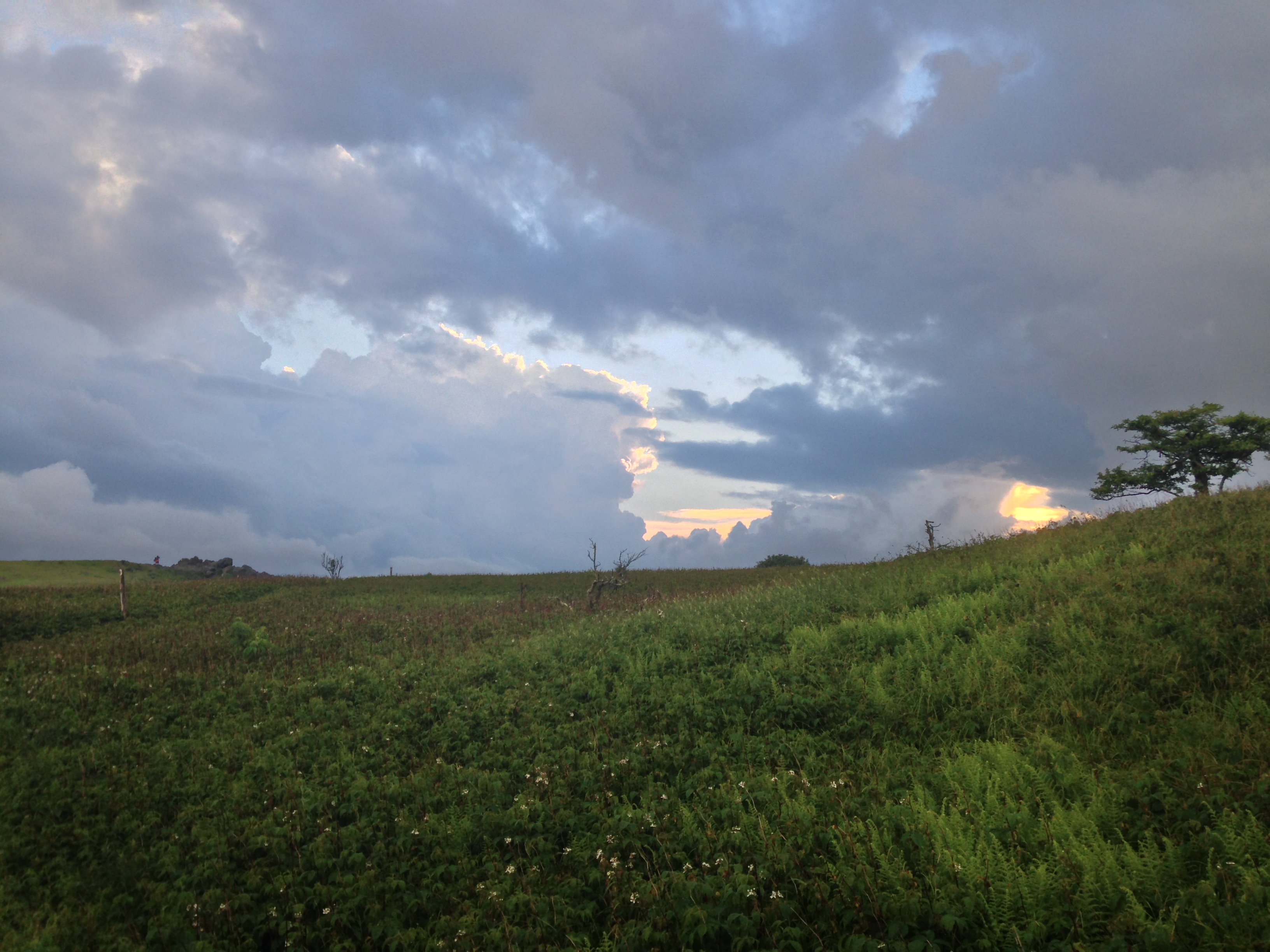 It was so rainy and dark five minutes before and now look, just gorgeous!

but darkness fell almost as soon as I reached the campsite and pitched my tent (and it started raining again), so I cooked a thoroughly underwhelming dinner in the wet and the dark. The dinner claimed that with the addition of some hot water it would transform into a full chicken teriyaki dinner but it was pretty low on flavor, or even any identifiable taste, so…never again.

Also, tonight I learned not to wear my headlamp while eating dinner, because trying to get my spoon into my mouth without also scooping up one of about a million ginormous mayflies was pretty challenging. And gross.

So to recap, I’m soaked, my bag is soaked, it’s raining, dinner sucked, I miss my friends, both the ones ahead of me and the ones behind, I’m pretty sure I ate at least one mayfly, and tomorrow is going to be an even longer day. Also, feet, per usual. But! On the other hand, I saw some really amazing things today, got to talk to some cool people, and I’m currently enjoying one of my favorite feelings, which is being snugged inside a very warm and cozy sleeping bag. We’ll call today a draw, I think.

Okay. Okay. I know I haven’t done that much of Virginia yet, but I’ve heard so much hate for this state and I just don’t see why that should be. A woman at the hostel spent fifteen minutes detailing for me all the ways VA sucks and I have to say that so far I do NOT see it. This place is gorgeous! I want to move here. 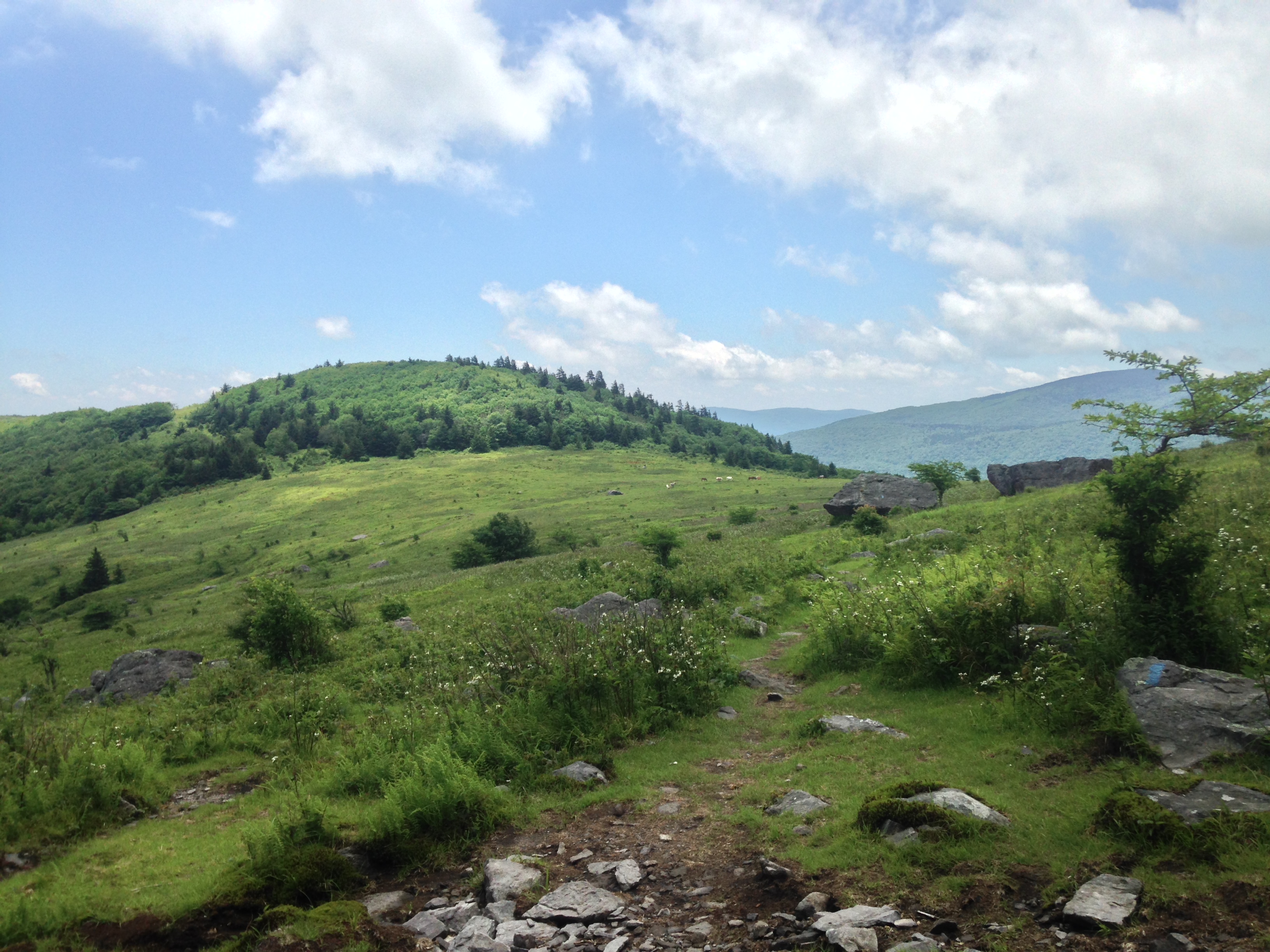 So, I got up in the morning and packed up my soaking wet tent (it’s totally dirty again, too, and will need a thorough cleanup at the first opportunity). The walk from the campsite to the first road was down some boulder-strewn trail that was lovely, very quiet and green and full of golden light. I caught some movement out of the corner of my eye and stopped to watch a large herd of deer picking their way through the woods about three hundred feet from me, like ghosts.

When the trail came out on the road, it was like a complete 180 degree change in scenery. The woods disappeared and in front of me were sun-drenched hilly pastures, covered in wild flowers and boulder piles. These fields led to more bouldered spruce forests, shady and cool, before giving out onto a shrub-covered bald as I climbed toward the summit of Mt. Rogers.

As I reached the intersection of the AT and the summit trail, I caught sight of a hiker sitting on the grass to the side. As I got closer, my excitement went through the roof because it was Recon, back on the trail at last and right there in front of me. Best. Reunion. My morale, already recovering from yesterday, skyrocketed. It is so fantastic to get an old friend back unexpectedly like that. 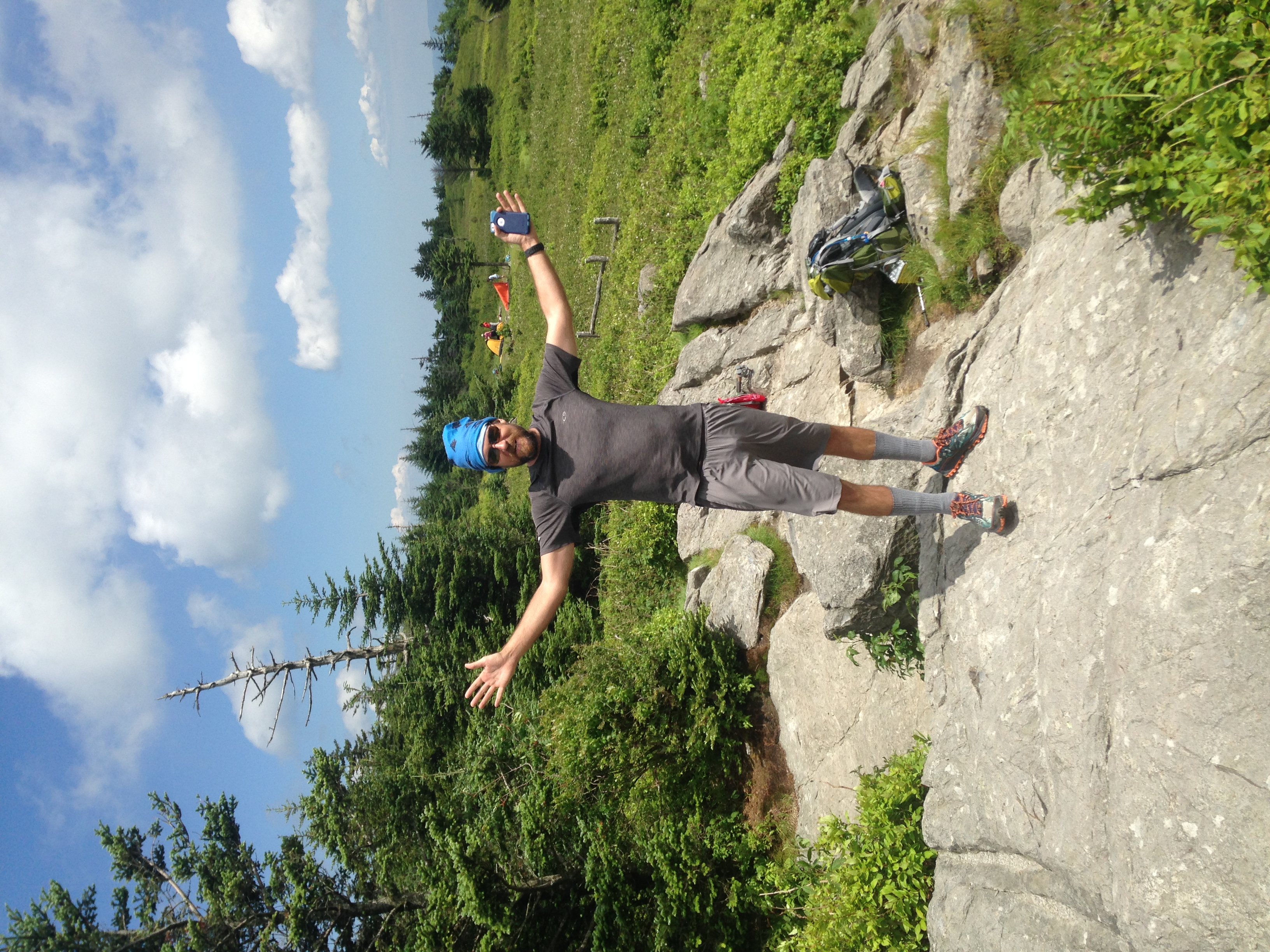 We hiked together over some absolutely amazing terrain for the rest of the day, stopped to climb some huge boulders, admired the rhododendrons in bloom all over Rhododendron Gap, and met the wild ponies of the Grayson Highlands before winding up at Wise Shelter for the night, which we had all to ourselves. 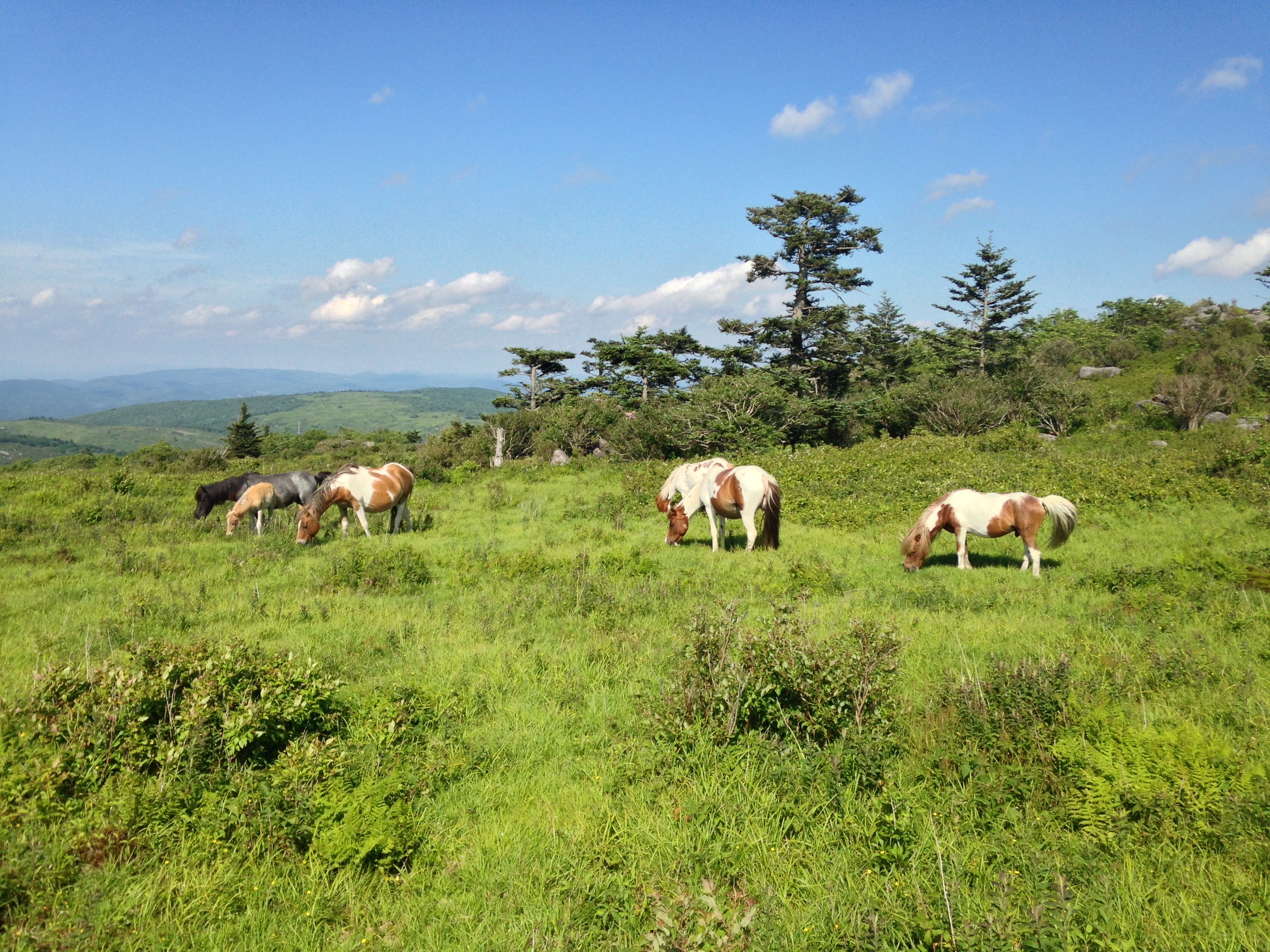 There were so many ponies.

At the shelter, late at night, we got another thunderstorm. The lightning, which mostly stayed up in the clouds, was almost constant, and we climbed out of the shelter to look at it, but an especially large flash sent me zooming back to the shelter and the absolute safety (right) that my down sleeping back afforded me. I guess I have a fairly healthy fear of being outside in storms now.

So that’s that! I have one of my tramily back, unexpectedly, and while he is reacclimatizing to the trail we will be doing some shorter days, but the day will come when we get to reunite the whole group. I am so excited. There never was a better up day to follow a down one.