Today was cloudy, but still lovely. Recon and I set out from Wise Shelter and hiked out of Grayson Highlands State Park, but didn’t leave the highlands behind right away. I was quietly hoping for one more pony party, but it wasn’t to be, alas.

Still, it was very nice hiking. And when we got to the Scales Livestock Corral we ran into a couple I met at Woodchuck’s, absolutely lovely people called Mary J and Dr. J. It was great to see them again! They were eating breakfast with a southbounder named Breeze, who is hiking with his beautiful dog. 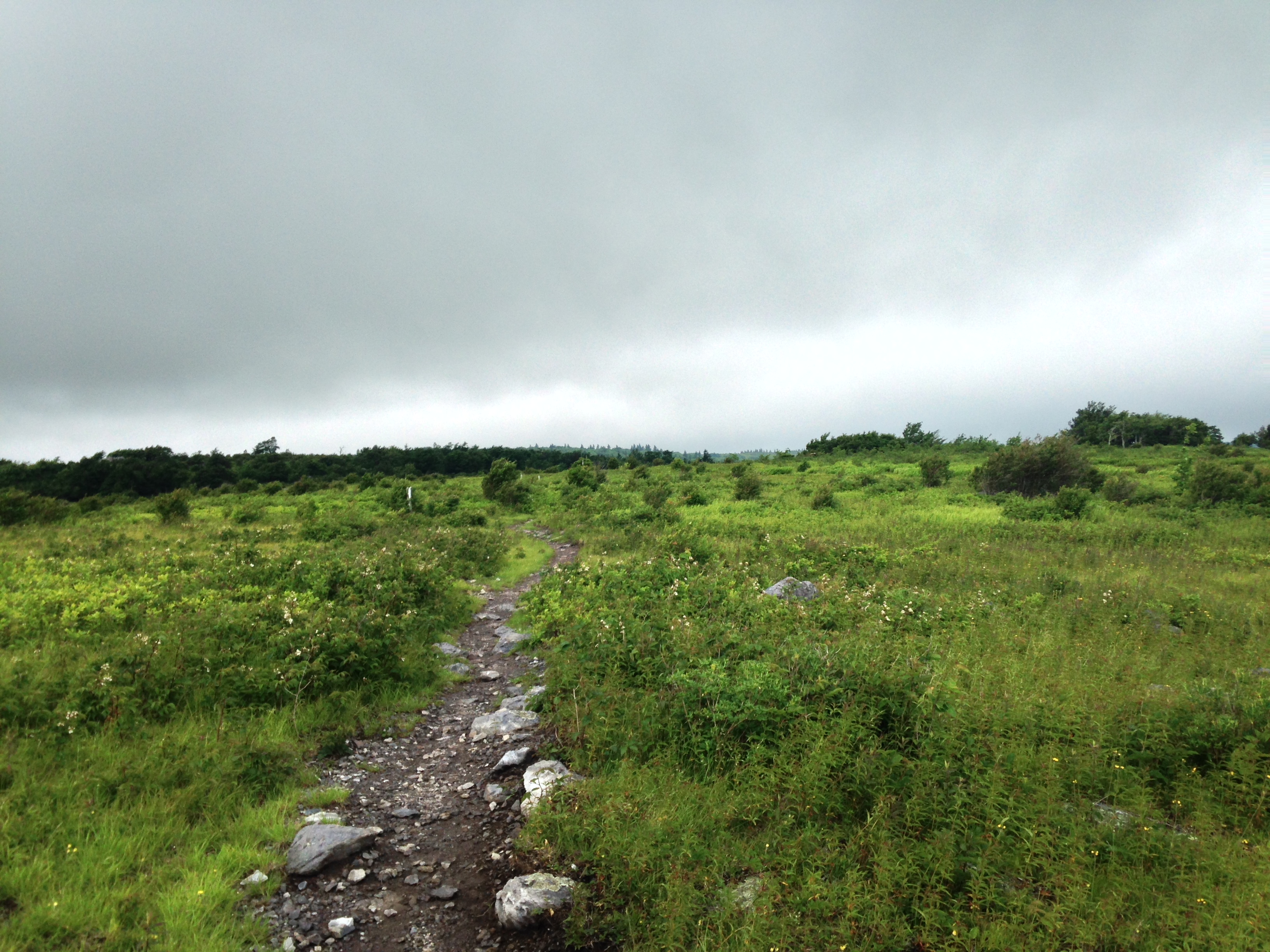 Cloudy but such a nice morning all the same.

Hiking north from Scales, the trail quickly got quite rocky. I tripped, badly, but saved myself on my trekking poles. I felt a wrench in my left shoulder, but it wasn’t too painful then so I kept going. After lunch, the trail smoothed out a bit, and I ripped through the rest of the mIke’s to Hurricane Mountain Shelter with Recon. Once there, we met a woman named the Flyin’ Hawaiian, who was actually tented near Wise last night, and who caught up to us after a very late start and decided to stay. I like her a lot, she’s very down to earth and funny.

Today started out well, my shoulder still ached a bit but I didn’t think it was too bad. The weather finally turned around and it was glorious. We moved pretty quickly because we slept in a little bit and wanted to do 19 miles, but there were certain sections of the trail that slowed me down pretty hard, not because they were difficult, but because it was so beautiful. There is a section of trail here, right after you cross the road and climb up to the ridge, that was just…I’m not sure I can describe it. The light was just right, and so clear, and the trees were far apart and seemed more like they were in spring foliage than summer, with rocks and ferns and logs all over, I don’t know. It felt like paradise. Like I would stay young forever up on that ridge line. 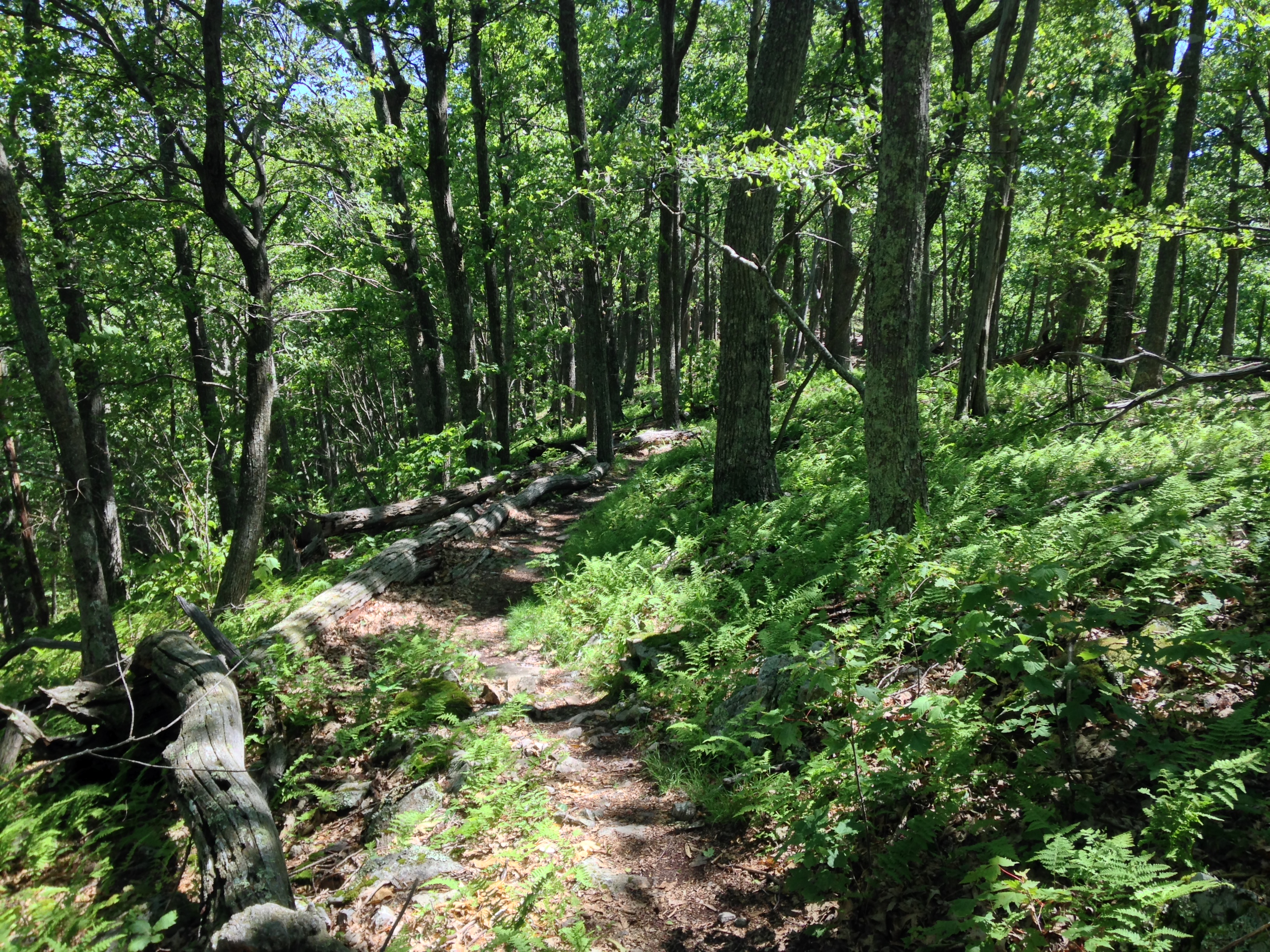 Maybe it doesn’t seem like it’s that remarkable from the photo. But being there was a profoundly beautiful time for me.

Anyway. By the time I got to Partnership the ache in my shoulder was much stronger. The Flyin’ Hawaiian was there, and Princess Peach, who Recon and I met while having lunch at Trimpi Shelter. Partnership is a beautiful two story shelter with an immaculate privy and a shower, and which is right next to the Mt. Rogers Visitor Center, where you can order food delivery. Recon and I went right for the food, ate way too much pizza and salad, and by the time we finished it was too cold to shower (there was no hot water there, and I just wasn’t brave enough to go into that frigid water). I went to bed.

Something was definitely wrong with my shoulder. I couldn’t find a comfortable position to sleep in, couldn’t put weight on that arm trying to sit or stand up, couldn’t even move it much, really. I was so tired, and so frustrated, and was really scared that I had done something bad, like torn the rotator cuff. I sat up most of the night, and finally exhaustion earned me an hour of sleep right as the birds started singing.

When I woke up again, I managed to navigate the ladder to the ground and ate leftover pizza for breakfast. Veto and Prof had come in late at night and we all made plans to go into Marion together to resupply. I also decided I needed to get my shoulder looked at, and plans for a resupply turned into a hotel room for the four of us. After showers, and a trip to Ingles for a snack, I walked to the hospital and got checked in at the ER.

Two hours and some X-rays later, I had some answers. Apparently when I saved that fall I hyper-extended my shoulder, and some of the muscles pulled away from the end of the humerus where it connects to the shoulder, and actually ripped a little chunk of the bone right off with them, and now it’s just sort of floating out there, getting in the way of everything.

So…that explains some things. My first question was, you can probably guess, “Can I keep hiking?” No definite answer on that yet. The great folks at the hospital made an appointment tomorrow with an orthopedist and they’ll tell me what I have to do to recover safely. If there’s any way to hike, even if I have to wear a sling (and it seems likely I’ll be in a sling for at least three weeks), then that’s what I want to do.

So the orthopedist rescheduled my appointment to tomorrow, which means I’m hanging out at the Travel Inn today. It’s not bad as hotels go, the operators are extremely nice and the room is comfy. I’m just bored, and worried, and not hiking. Prof, Veto, and Recon all hiked out today, and if I can get back on the trail tomorrow after my appointment then I will get to work catching up. …Again. I seem to keep running into bad luck in Virginia, haha. But I love it so much! It’s a problem. If, on the other hand, I have to take time off for rehab, then I will take a Greyhound home. Then I will jump ahead to rejoin everyone and after Katahdin I will come back and hike the section I missed, southbound. It’s my consolation plan, if I have to do it that way, to hike back past Marion and do the Grayson Highlands a second time in the autumn and end in Damascus. I’m telling you all, it’s the most beautiful place I’ve ever seen. I don’t understand why it’s not crawling with people all the time.

Okay, so I got in to see the orthopedist, and the news is actually pretty good. The doctor looked at the X-ray and said that the “chunk of bone” is actually a calcium deposit from the last time I wrecked my shoulder. After poking at my shoulder and eliciting quite a few pain reactions, he declared it was probably a bad case of tendinitis from all the pressure I had put on it, but the fact I had been able to use it the following two days indicated that there was less of a chance of a serious tear in a tendon or the rotator cuff. He recommended that I wear the sling until I start getting some range of motion back, and if it still hurts this badly in a few weeks, then I should consider maybe getting an ultrasound to check for tears. But, he said it’s not urgent and as long as I can stand the discomfort, hiking won’t delay my recovery time. So onward!! I’m so excited and relieved. I’ll be heading out tomorrow morning, and in the meantime, the delay gave Tuck, Atman, Clarity, and Exterminator a chance to catch up. Now the VA challenge is entirely to catch up to the rest of my friends. I accept the challenge.