Today was WAY worse than Blood Mountain. Wildcat Mountain was the toughest ascent yet, and it was hot and sunny, which made it worse. I was sweating in sheets, but when I got to the top, wow, the view. I actually teared up a little. Maybe I was tired, but the thought that here is all this incredible beauty, free to see, and so breathtaking, and I had always missed it before, really made me feel emotional. 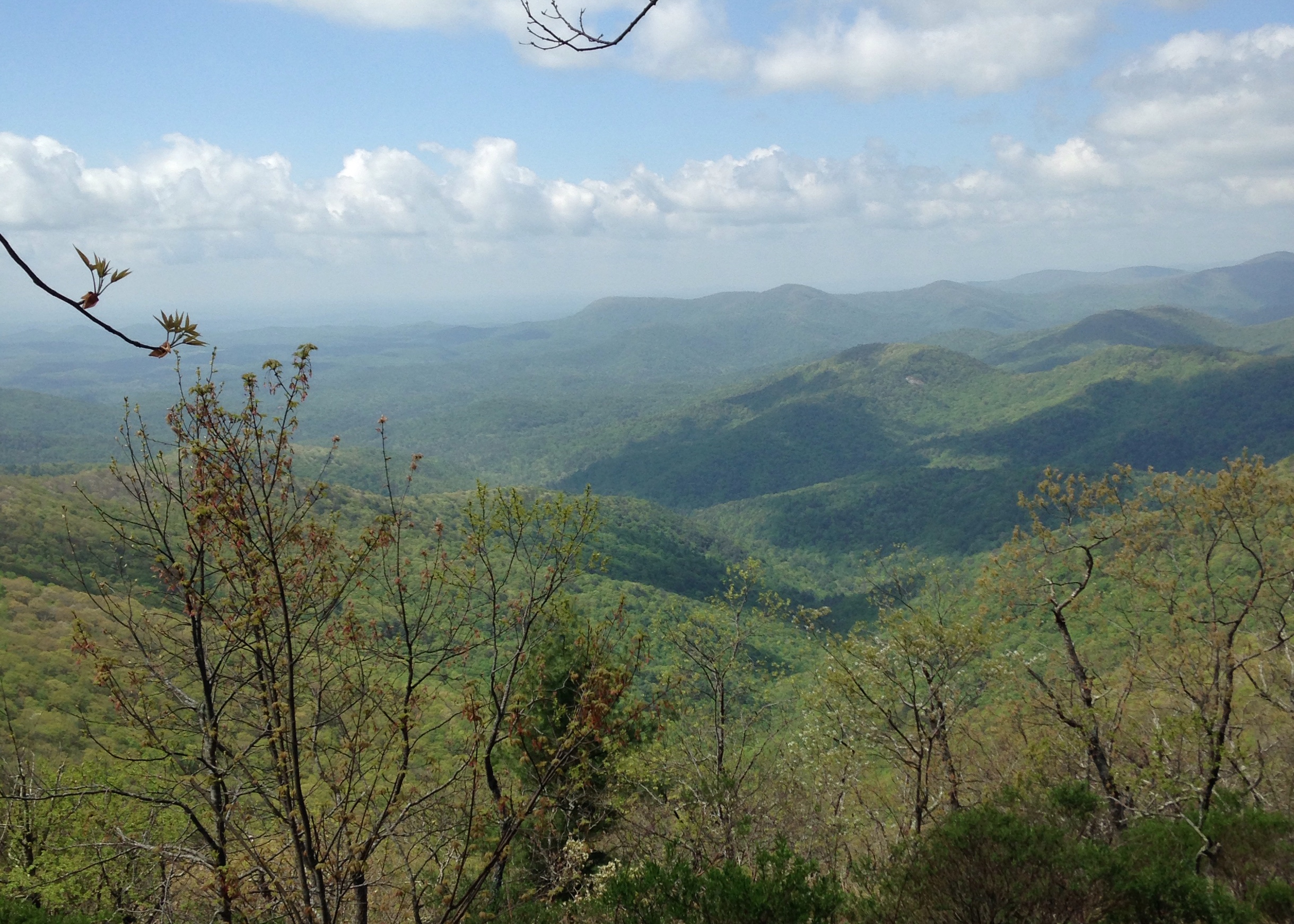 The view from the top of Wildcat Mountain.

Anyway, Noah did well on the uphill, but was dragging and tired again by the time we got to Low Gap Shelter. I feel so bad. I checked his paws, there are no new rubs on the pads and the old ones are looking good, so hopefully he’ll have his pep back tomorrow. I’ll keep treating his paws and keep my fingers crossed.

Tom and Robyn saw a rattlesnake this morning. They showed me a video of it: Tom got waaaay too close! It should be up on their blog, I think.

Hawk and I chatted a bit tonight, tomorrow is his last day and I know he’s sad to leave the trail and head back to Michigan. We will all miss him as well. He also gave me my trail name! He cracked a joke that I was kicking his ass every day on the trail, just like Xena, and it stuck. I don’t think I’m really rocking it that hard, but it’s a good name to grow into. So there you are, from now on, I’m Xena. Pleased to meet you.

Today was a pretty good day! I convinced the trail family (or tramily, as Chris calls it) to do an extra three miles to the camp site at the top of Rocky Mountain rather than try to do Rocky Mountain and Tray Mountain on the same day. Most of the trail was beautiful. There were some really rocky parts, but it was sort of fun going over them. Hiked and chatted for a bit with a section hiker (also named Chris, but not our Chris) whose last day is today. His plan is to do a week at a time a few times a year until he has done the whole AT. But he’s getting off the trail today, and Daniel is going with him. Daniel’s feet are absolutely covered in blisters and he is feeling done. It’s sad to see people peeling away.

I got down to Unicoi Gap and waited for Hawk there to say goodbye, then started up Rocky Mountain. It was a tough, hot climb out of the gap, and I was out of water, so it was a really slow mile and a half to the summit. Once I got there, though, I had such a good time with my tramily, cracking jokes and relaxing. What a wonderful way to spend a day. 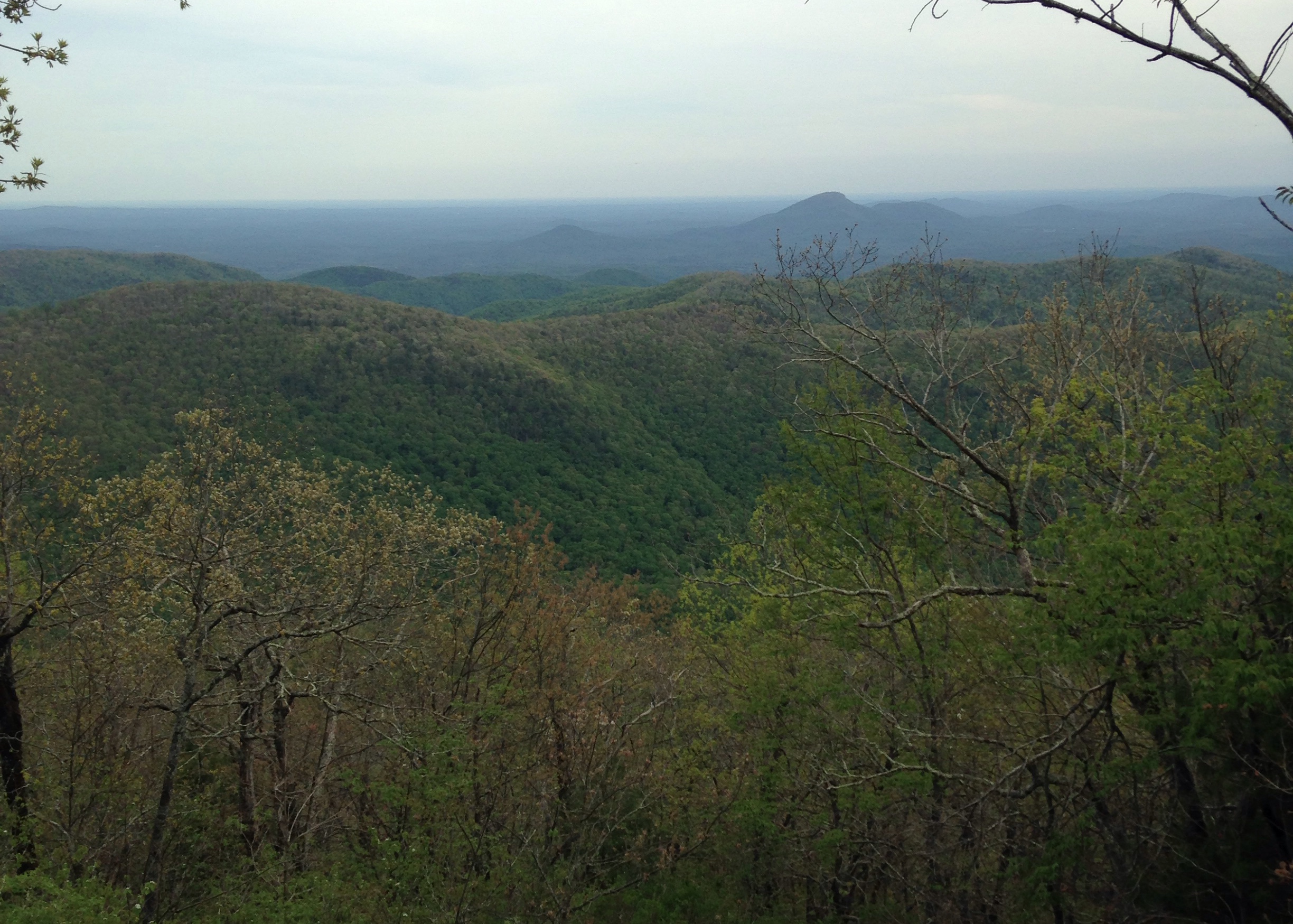 Looking out from Rocky Mountain. 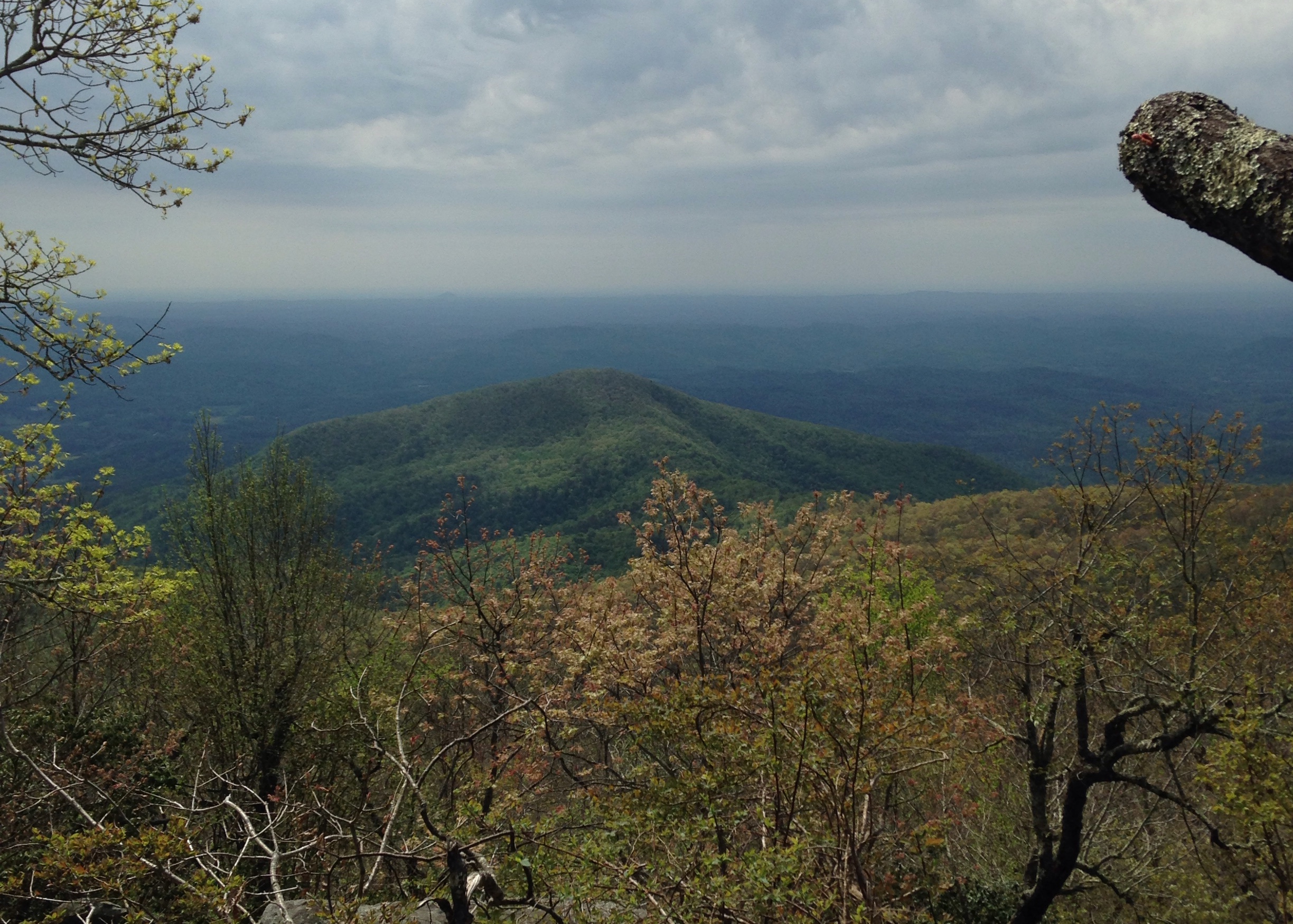 The views from Tray aren’t bad either.

I don’t know who told us Tray Mountain was going to be difficult, but they lied. Of course, a week ago when I started, I might have felt differently. I can definitely feel my body getting stronger. Got to Sassafrass Gap by 2pm, but Tom and Robyn seem to have pushed on a bit. Hopefully we’ll catch up to them at Dick’s Creek Gap tomorrow, which will be a short 6-mile day.

I got the tent set up right before a short shower, then got water and sat at the creek talking to Chris about food. He is such a riot, never misses a joke. We got back up to the campsite just before a thunderstorm and napped until it cleared up, then had dinner before the next storm hit. It poured all night.

It was a short walk to the gap, but the downhill was pretty rough, and made me glad I wasn’t trying hike it southbound. I took the half-mile road walk to the Top of Georgia hostel, and found Tom and Robyn there, all clean and laundered. I got my first shower in eight days. EIGHT DAYS. I was so excited! I couldn’t calm down; I was bouncing off the walls in there. It felt so good to be clean.

Aly and Chris caught up to us at the hostel and we all took a shuttle into town to eat and resupply. We grabbed some groceries, sent them back to the hostel, and parked at the all-you-can-eat buffet. The place is called Daniel’s and it was out of this world. A waitress who was working there saw Noah tied outside and asked if she could give him some chicken. When I looked out the window she had a whole TRAY of chicken for him. Next came a platter of steak tips, and when I left she handed me two pounds of turkey breast. Noah ate it all. So spoiled, haha.

The sleep I got at the hostel was awful. I know it’s a toss up when you’re sharing a room with a bunch of strangers, but dang. There was a major snorer. I mean, just immediate rip sawing, shaking the beams and everything. No one but him slept much. Readers, if you know you snore, and you plan on spending time in hostels or shelters, invest in a breath-right strip or SOMETHING. Please oh please.

Today was a long day. The first part of the day was uphill, hot, and muggy, custom made to erase all evidence of a shower. I got to the top of Buzzard Knob and thought it started raining, but it was thousands of crickets jumping out of the way of my trekking poles. Tom is officially trail-named Silverback both because of the way he just beasts up hills and because for some reason his silver Thermarest keeps flecking off on his back when he sleeps. Four of us have them but it only happens to him. Crossed the GA/NC border (one state down!) on an easy stretch, in the company of an opera singer named Robby, and then climbed out of Bly Gap…one of the most humbling experiences of my life. So steep! The elevation map looked like it had a rhino horn on it. Finally got to MCS just before an incredible downpour, had to hang my bear bag in the dark and rain, then tried to sleep with a lot of pain in my feet. A long day.