In hiker language a “vortex” is when you get stuck in a town or hostel for longer than expected, drawn in by the temptations of non-hiking activities. Our vortex was, unfortunately, not due to us having too much fun but due to Pinky coming down with the “stomach bug” that has been going around. Our 3 days in Damascus turned into 5 after we spent 2 more nights recovering in town.

Other than Pinky being sick, Trail Days was a success. Tact and Krazy Kop picked us up and we bid farewell to the alpacas. Tact hooked it up and made us amazing steaks on his charcoal grill all weekend. He also had a cooler so we had the rare luxury of cold beers all weekend. 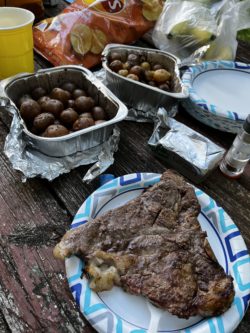 Trail Days is a hiker festival so it’s all about food, beer, and gear. There were tons of gear vendors. Most of them had free stuff to give away and most had experts who could repair or replace broken gear. The church ministry had charging stations for phones, people doing free hair cuts, all you can eat snacks, drinks and 3 square meals a day. PLUS, my favorite- coloring books and gel pens. I spent a lot of time in there. Various tramily camps also had free food they doled out at various times. We had potato hash, tacos, and amazing pork barbecue bowls. 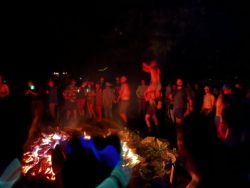 Trail Days is also a giant woods party. There was this massive bonfire with people playing drums and primal half naked dancing. The bonfire happened two nights in a row! It wasn’t even the biggest fire. Over in “Riff Raff” (name of one of the long standing tramily camps) there was a bonfire going all weekend long. It was professionally tended by Pound Puppy. 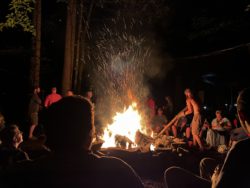 Our neighbors were loosely associated with the town church people. They had a much smaller fire ring they were calling “Sober City.” They wanted to provide a safe, quiet place for people to get away from the crazy. They also served free breakfast and late night snacks each day. They were awesome neighbors. We especially got a kick out of drinking beer right next to “sober city.” 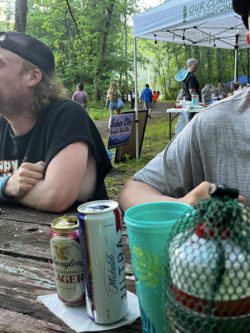 Because Virginia has open container laws, we were not actually allowed to drink beer. BUT the police told everyone if it wasn’t in it’s “original container” then we could drink whatever we wanted. So we got silly cups at the Food City. 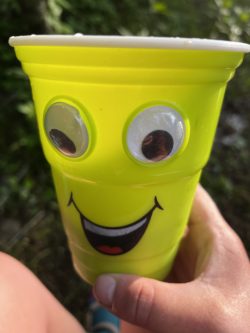 Pinky rallied enough for us to participate in the Hiker Parade on Saturday afternoon. This is a Trail Days tradition in which all the hikers walk down the Main Street while locals spray them with garden hoses and super soakers. 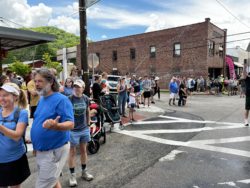 Paraders tend to wear crazy costumes- most people were wearing silly outfits all weekend long, not just during the parade. It’s the height of the hiker fashion season! The classic outfit is from the thrift shop and often a dress or something brightly colored or otherwise ridiculous.

We did our best to enjoy Trail Days but ultimately we were relieved to leave. Pinky had a pretty tough time. He was not feeling up to hiking right away so we had Tact drop us off at a hotel in Marion. He pushed fluids and tried to eat. In the morning he was feeling better so we resupplied at the Wal Mart and caught the *free public bus* to Atkins. We didn’t even make it out of the gas station parking lot before he decided we needed another night in town. So we went next door to the shitty motel.

We were thrilled to find we weren’t the only hiker trash there- Lumen and Bucket were there too! Bucket had also been sick all weekend and was still recovering. We hung out with them and befriended a cat. 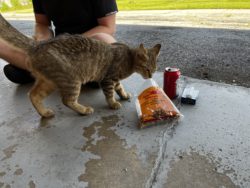 He liked red velvet cake and was unsure about pork rinds. He also tried to catch a duck but just pissed her off.

In the morning we felt ready to try again. We were a little nervous but very much missed hiking…