Okay, I’ve got some explaining to do. The good news is, I’m back on the trail! And I have been, for, uh, three weeks. My shoulder is in great shape, but apparently while I was at home I forgot how to blog. I haven’t written once, no good excuses for it, and I don’t think I can go back now and give a 100% accurate description of each day, so instead I’m going to use this post as a sort of highlights reel.

What happened to the weather while I was off the trail?! When I left it was gorgeous, and I’ve come back to some sort of out-of-control sauna experience. Anyway, hiking got hard all over again. I turned in my rental car, got a ride to the southern entry to Shenandoah National Park, and where did my trail legs go. Eight miles took almost five hours, and by the time I got to the shelter my shoulder ached and I was sweatier than I’d gotten in a full week of hiking previously. But you know what? Who cares!? Because Shade and Silver and Lassie (did I mention Robyn finally got her trail name? It’s like…Highlands Lassie. Not collie Lassie) were all there and it was a fantastic reunion. I missed them all! Sunshine and Dirty Mike and the Boys (that’s Redbeard, Centaur, Squatch, Joe Dirt, Red Bull, and Sandy Man) were all there too, best bonus. I tangled with my first bear pole, probably easier with two shoulders, and went to sleep seriously exhausted. 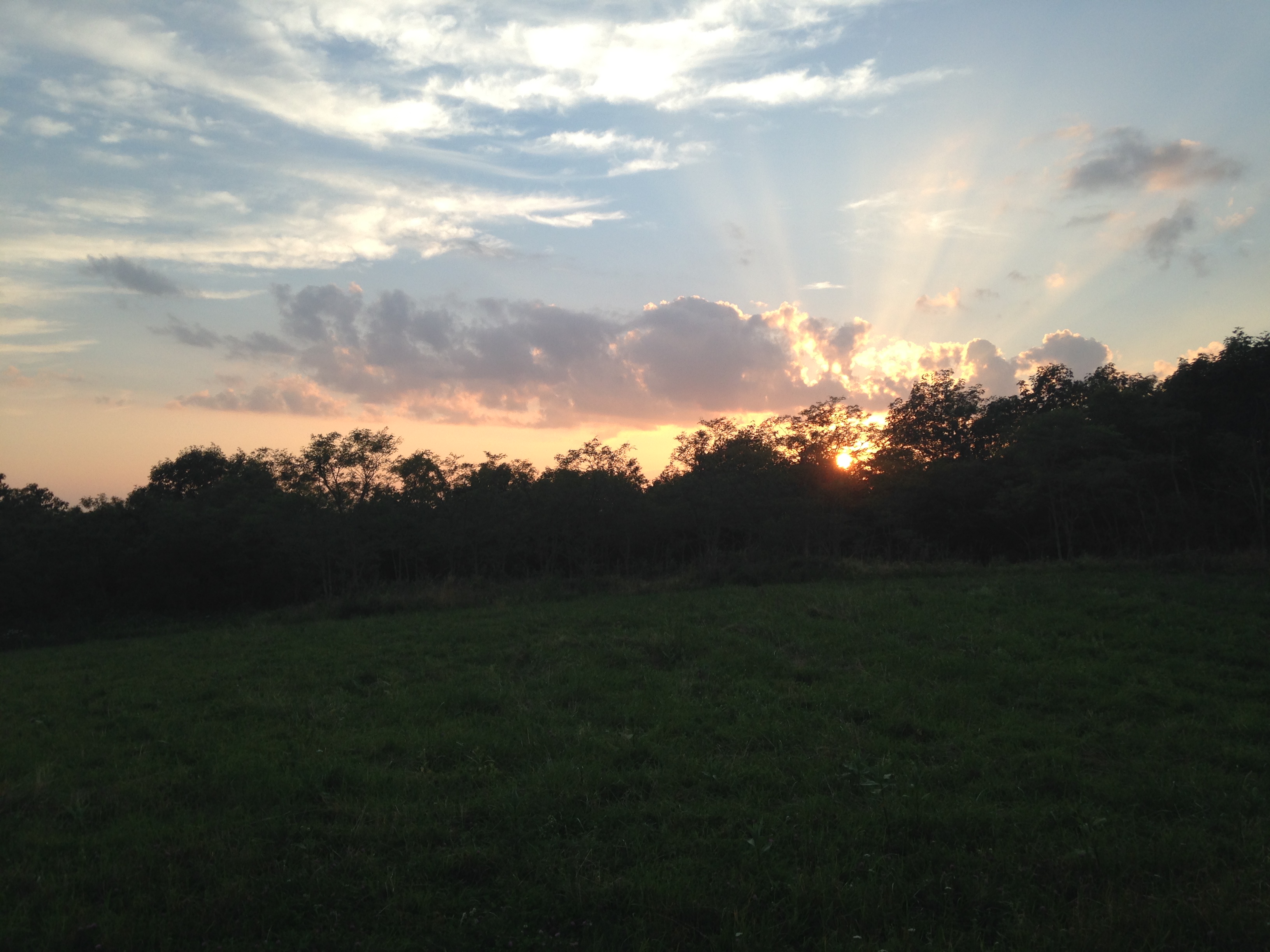 My first sunset in the Shennies.

Okay. I’m not gonna lie, the Shennies were just…not my favorite. On the good side we had: easy trail, 14 bears, many deer, blackberry milkshakes, some fun cliffs, a shoulder that was better and stronger every day, reconnecting with The Councilor, who joined me on the second day in the park, meeting some awesome new friends, and the sheer joy of being back outside. On the bad side: the humidity was just oppressive, I couldn’t do the miles I used to and lost my tramily again almost immediately (Shade after just one day and Silver and Lassie after three), Skyline Drive and all the accompanying traffic and people were right there allllll the tiiiiiime, the humidity, the hiked up resupply prices, the humidity…and I also thought I might have to quit at Harpers Ferry. I’d pretty much decided that it wasn’t responsible to zero out my bank account doing this trip, so Councilor and I took a bunch of really slow, easy days up to Harpers Ferry because I didn’t want to rush through the end. But the thought of stopping didn’t just make me sad, it made me angry, like I was compromising on something that shouldn’t be a compromise. So I’m going to push on, and just see how it goes. 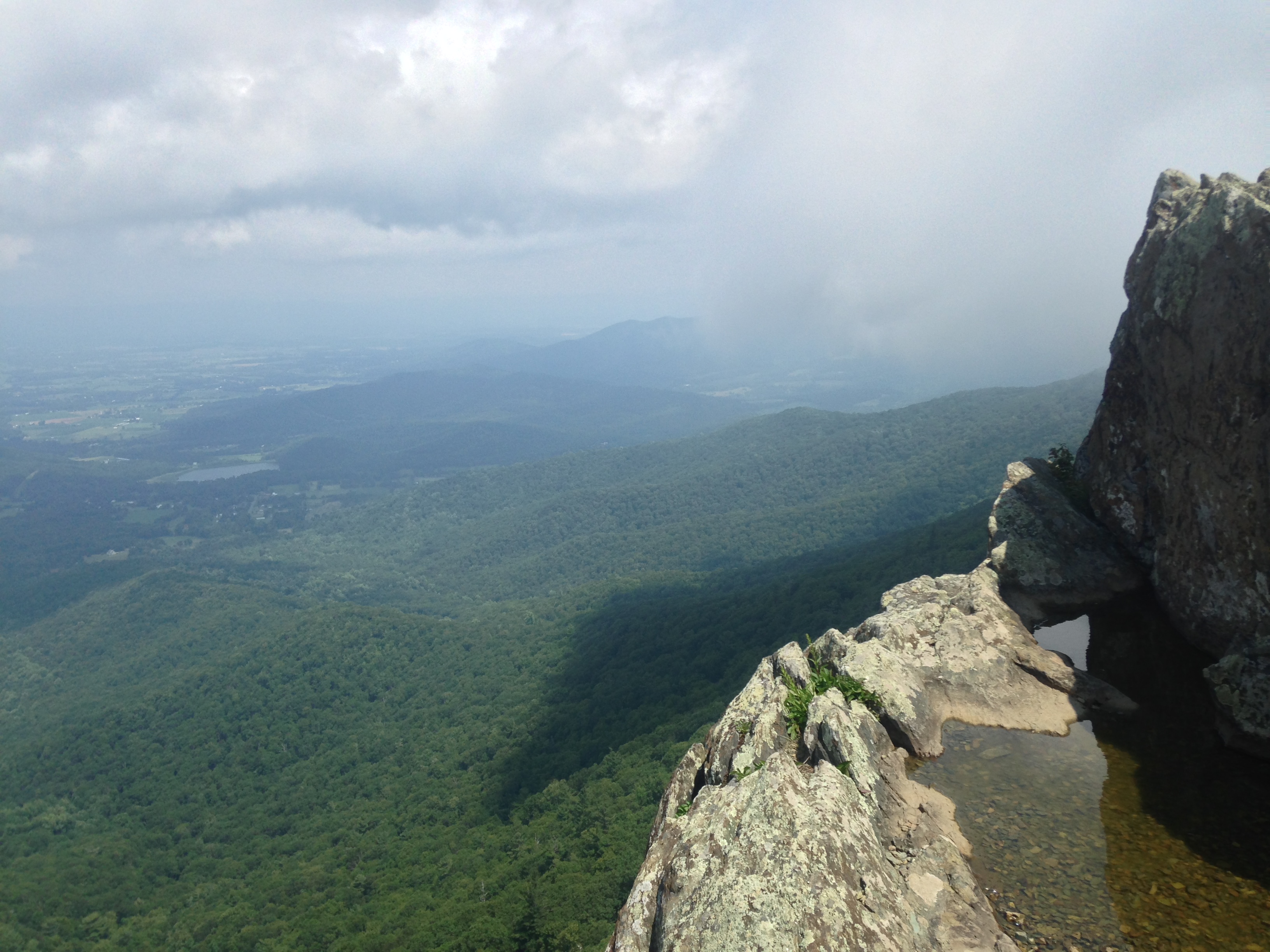 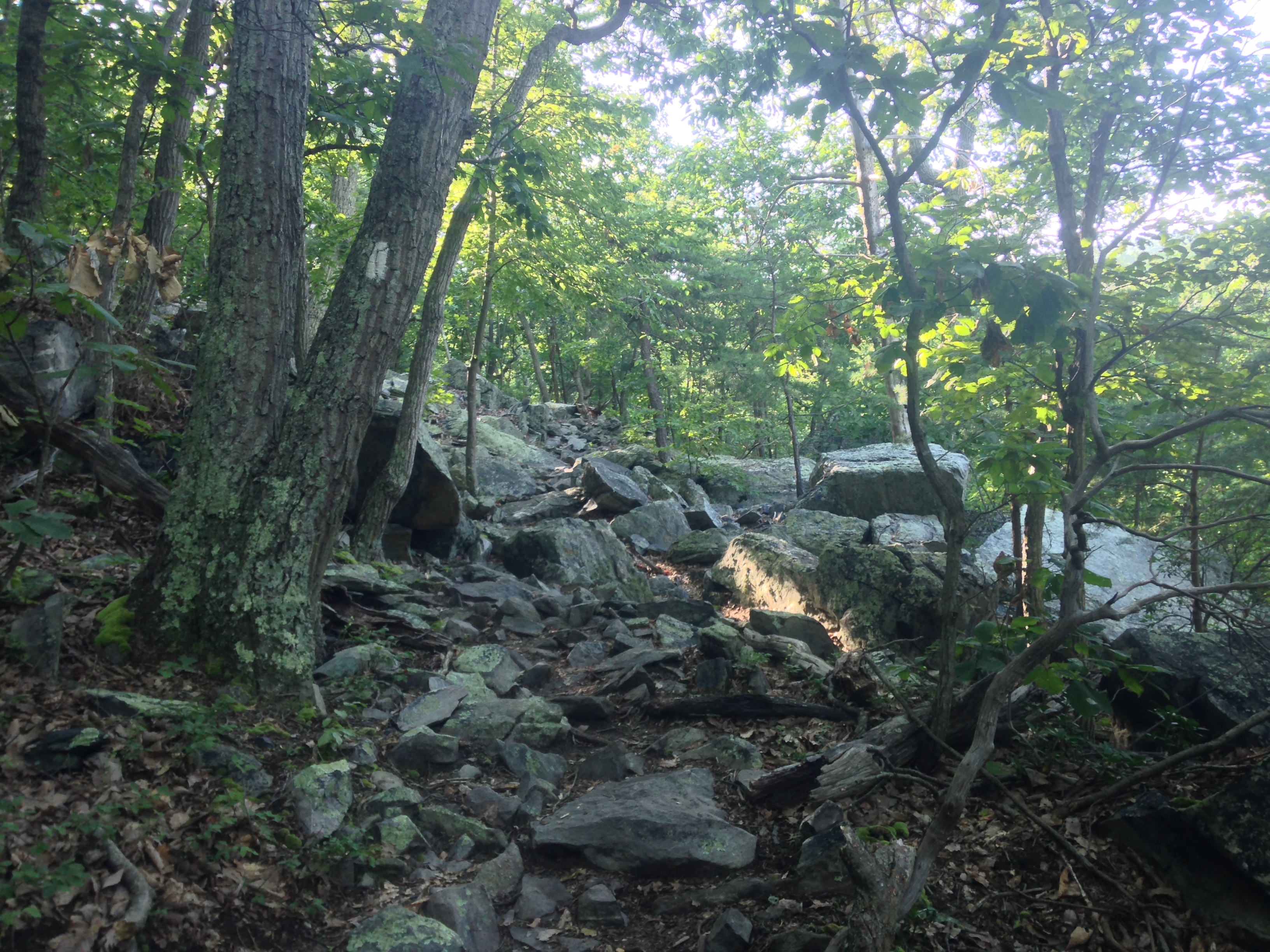 Just a taste of all the Rollercoaster had in store. Wheeeeee.

I think it’ll it had been just fifteen degrees cooler when we hiked it I would have loved it! But instead it was in the nineties and humid and I was very grumpy at the end, which is where Councilor and I got caught out in another thunderstorm. At this point, after several road tests (trail tests?) I think I can say with some confidence that thunderstorms really scare me now. I came pretty close to running over the last two hills, and then I sat down and drank the root beer Councilor conjured up for me earlier that day like a damn magician. I had been talking to two women who were out for the day, answering questions about thru-hiking, and had mentioned how much I craved root beer, when Councilor came up the trail behind me and, without hearing the conversation at all, pulled a can of root beer out of his pack for me. Trail. Magic. That man is amazing. Anyway, we had planned to go a bit further but we reached the Blackburn AT Center and I realized I was done. We put up tents there, and stayed the night. It’s a beautiful spot, and the caretaker gave us iced tea and coffee cake. Good end to the day. Also, for as bad as The Rollercoaster felt, the section immediately north is gorgeous. Well worth it, in my opinion. 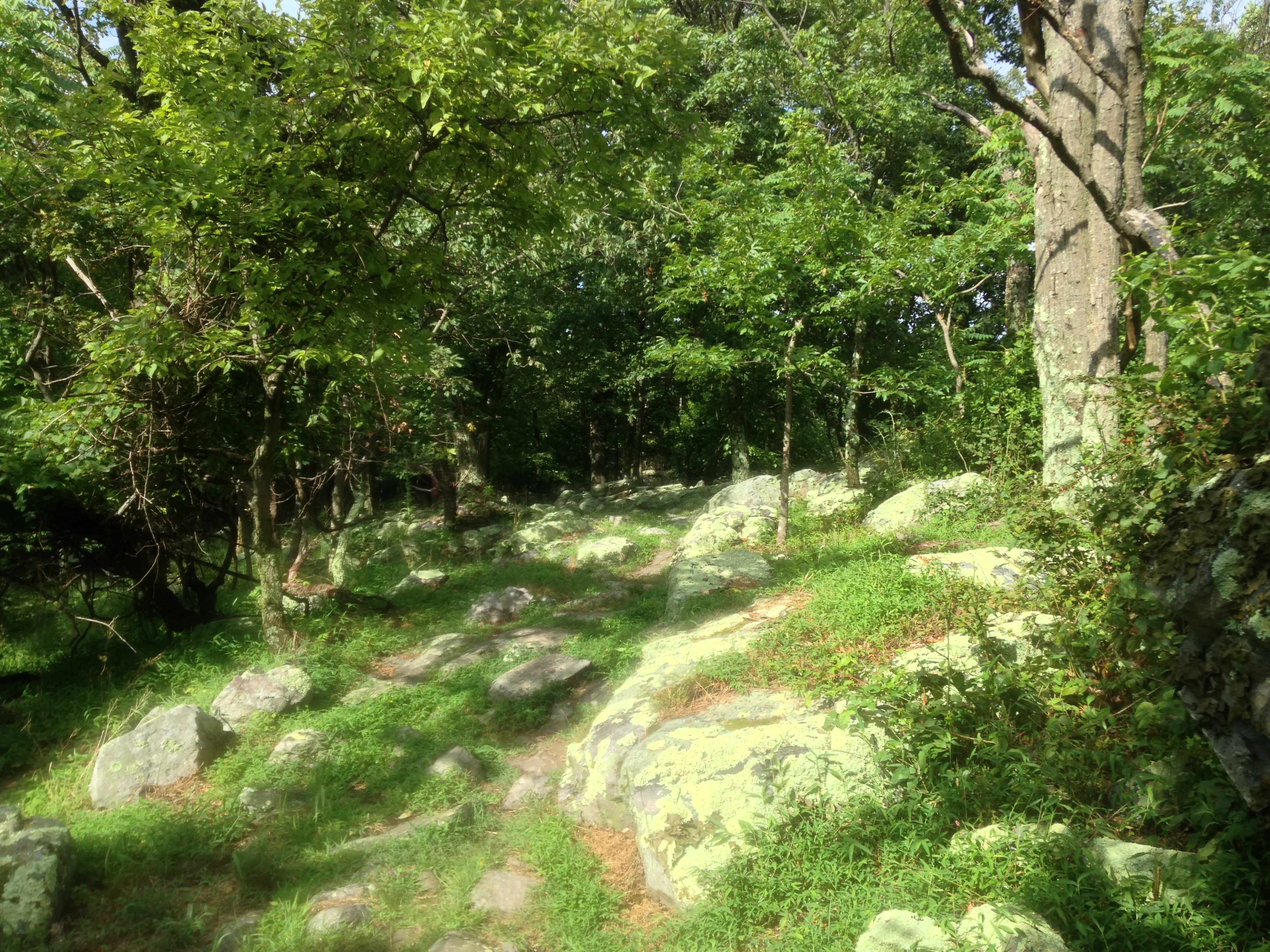 I think this part is called the Devil’s Racecourse. Way prettier than the name would lead me to believe.

Days 74-75: West Virginia and Maryland, oh and by the way Harpers Ferry 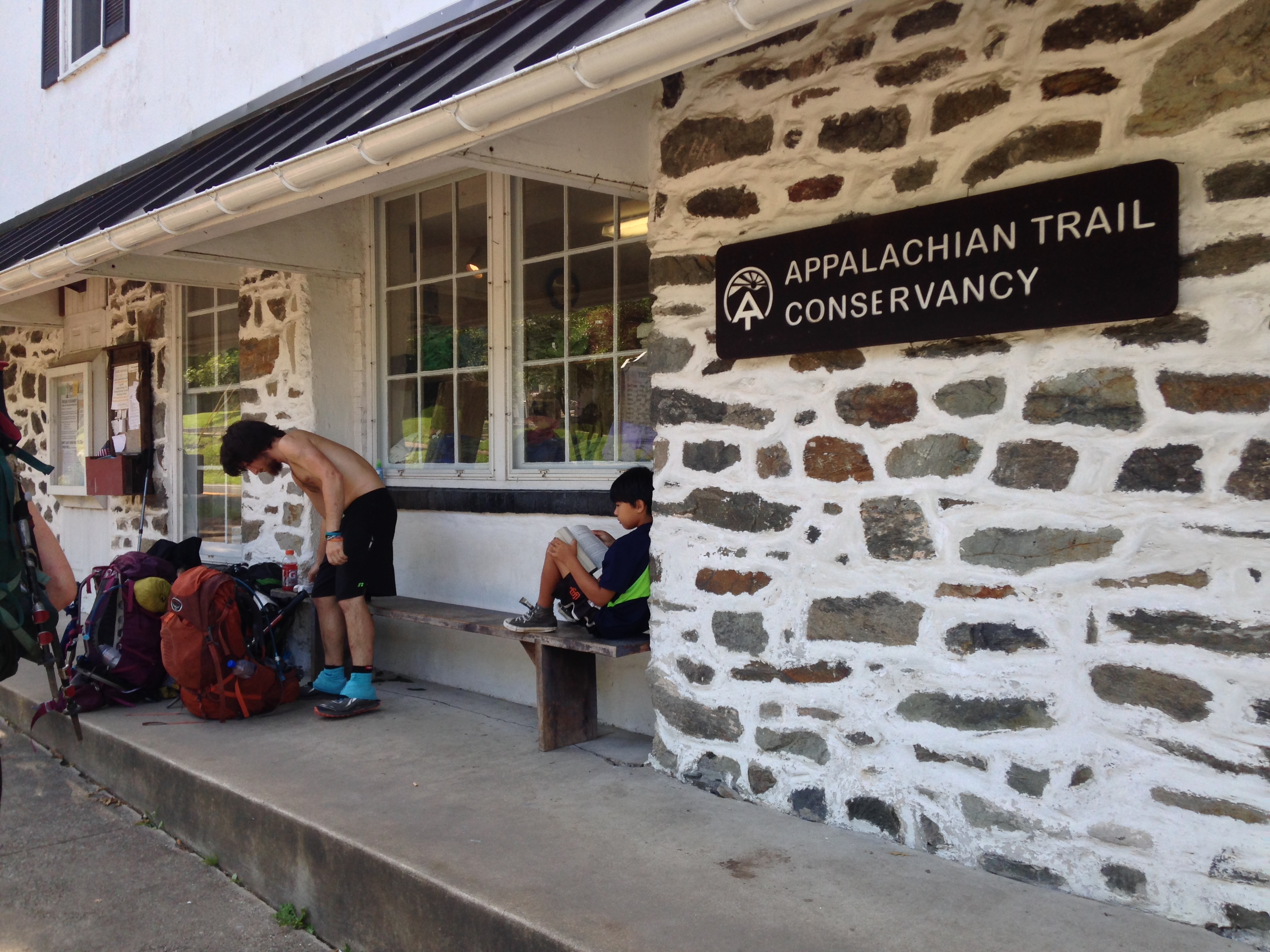 Yup. Mental halfway point reached! Feels good. I took a really terrible photo at the ATC there. Very sweaty looking, so, pro-tip, take some time to cool off before your photo shoot. It’s still hot and awful out. I guess there’s a heat wave or something, although I really didn’t need the news to tell you that. I’ve been living it. Anyway, Councilor and I met up in Harpers Ferry with two of the friends he was hiking with before, Sticks and The Girl. They aqua-blazed the Shenandoahs, which means they rented a canoe and went up the river rather than hiking on the trail, and were back on trail now at the midway point. I like them both, very laid back and funny people. After spending the night at a campground in Harpers Ferry we crossed the Potomac River and headed north again, into Maryland.

This section of the trail felt really different because the trail kept running into parks and memorials, which was pretty interesting and really helped to give a sense of the history which surrounds the trail, but which we sometimes forget to stop to think about. In a way it felt a bit like a school trip, because oh hey, here’s Gath’s empty tomb or there’s the War Correspondents Monument. But on the other hand it also felt a bit skewed, because sometimes when I was hiking through the woods I would notice that most of the trees were pretty young and there were ruined stone walls here and there, and I would realize that maybe a hundred years ago this was all farmland and it all looks so different now. Time changes everything, right? Who knows what the trail, or the land around it, will look like a hundred years from now?

Okay. That’s it for now. Sorry for the long delay in updating! For a consolation prize, here is a video of me chasing away a (very small) bear in the Shenandoahs.

Oh wait, never mind.  The file is too big, ho hum.  Anyway, I chase away bears and climb mountains and cook on a fire and sleep in the woods, I’m ready for my leading role in a Laura Ingalls Wilder book.

Glad to be back on the trail. Glad to be writing again. Talk to you all soon.