Sticks and the Girl didn’t show up at the campground last night, while Councilor got in super early. He hikes so fast, he just goes blowing by me, so even though I leave much earlier in the mornings, he tends to be the first to our destination at night. I got in with enough time to take a free shower at the rest area there (so much love for free showers), and went to bed, but couldn’t sleep for some reason. So naturally I got Councilor up much too early, in his opinion, and was just getting ready to head out when Sticks and The Girl showed up, having stopped a few miles before the campground last night. They stopped to take showers while I headed out.

I stopped for a bit at Washington Monument to take in the view, but generally I spent the day at a steady pace, trying to ignore the heat and enjoying the trail, which went through some very beautiful forest before breaking into a pretty rocky section in the afternoon that slowed me down. 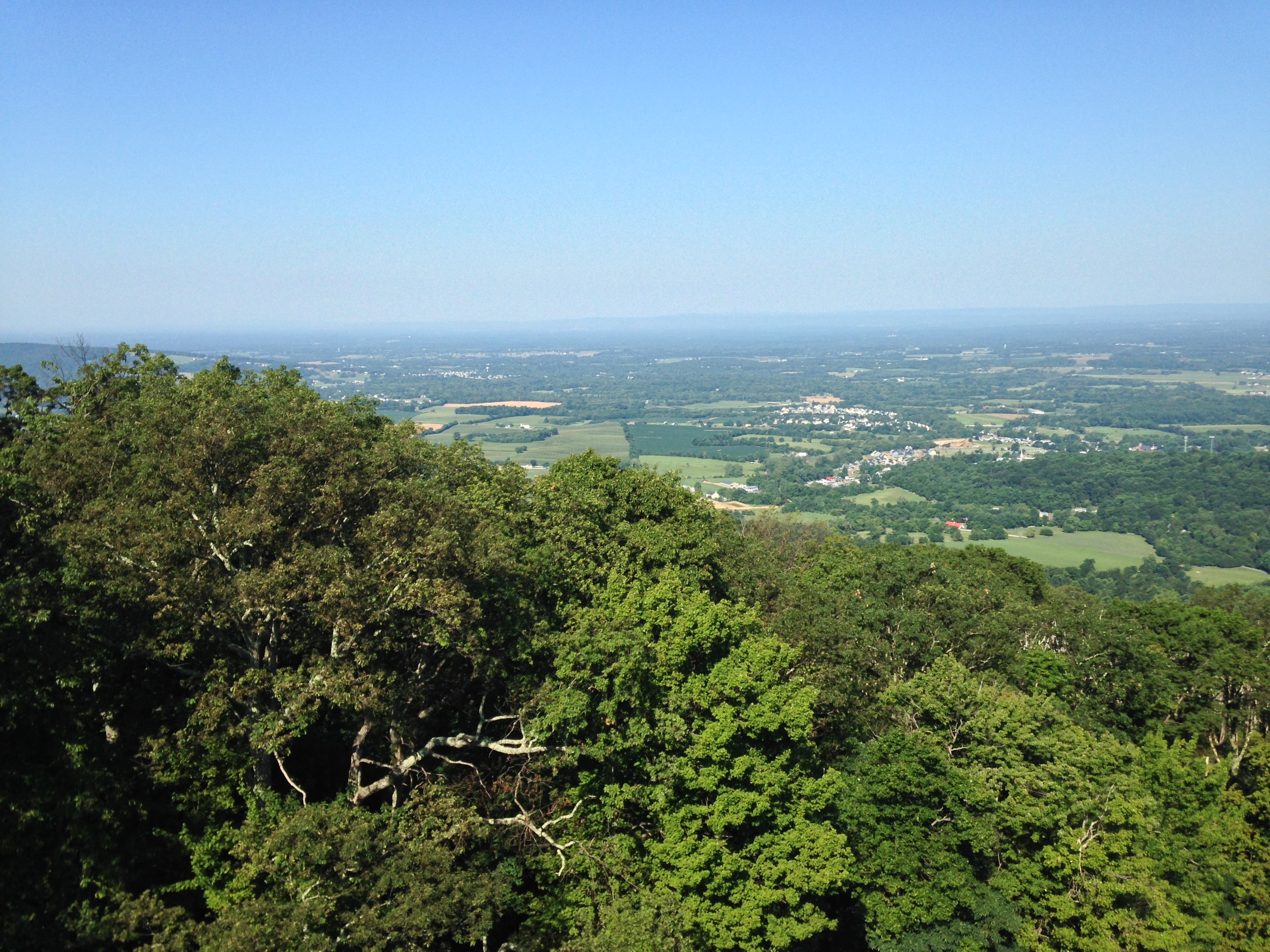 The view from the Washington monument, looking out over the battlefield at Antietam.

When I got to the Ensign Cowall Shelter at about four, there was no one there, so I sat down to do some blogging, but the heat and last night’s lack of sleep combined into a potent nap imperative. I only woke up when a hiker named Dulcey Girl stopped in for the night around 5:30. She and I chatted until Councilor showed up, followed by Modest Mohawk, a hiker I met yesterday, and another gentleman whose name I didn’t catch. Sticks and The Girl didn’t show up until after dark, because they like to spend lots of time at all the views and parks, which is a nice way to hike, I think.

Today took us out of Maryland and into Pennsylvania, but not before going over High Rock, which, I’m ready to bet right now, puts anything PA has to offer in the rocks category to shame. My goodness. I mean, just look at this nonsense. 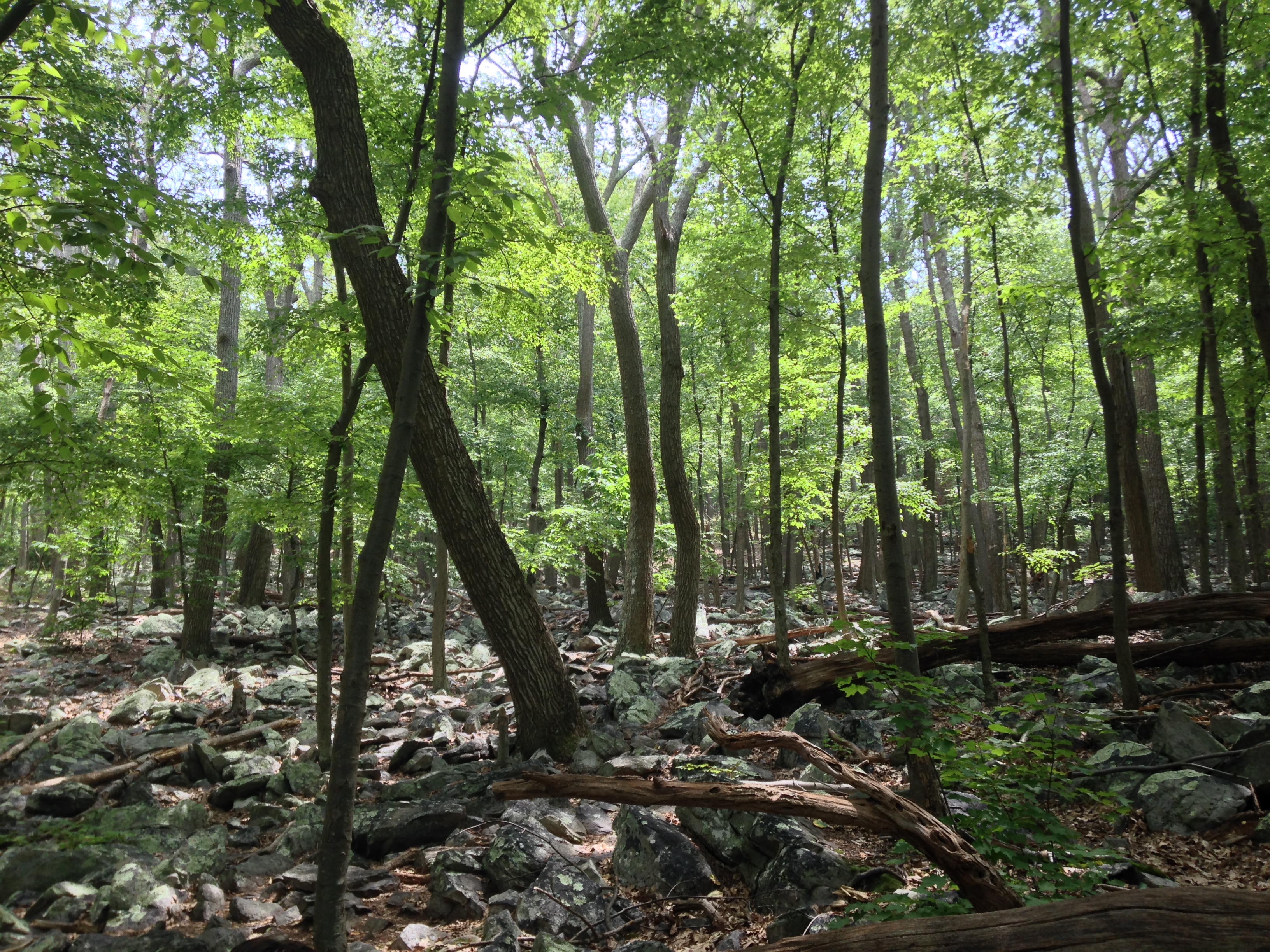 The…the trail is in here. Somewhere.

There were a lot of day hikers out, which is nice, although the number of families on the trail meant that I subdued my desire to hike in only my sports bra for the day. I haven’t done it yet but it is just so hot I might cave soon. Sweaty shirts are gross.

We all stopped at Pen Mar State Park, and hitched a ride into the Walmart for a resupply. When we got a ride back, we forgot to ask to go back to the park and the woman who picked us up dropped us off two miles up the trail, after the Mason Dixon Line and MD/PA signs. Oops, and oh well. We decided to press on to Deer Lick Shelters (yeah, two small shelters side by side). The last two miles were very easy and went pretty fast, and we had a nice evening chatting and getting to know the new group dynamic a little.

IT IS HOT. I kept telling myself, over and over as I climbed and sweated, that I chose this life. I chose it on purpose. It was very deliberate. But holy cow, if someone appeared on the trail with an offer to take me to A/C on the condition I could not come back to the trail, I would be tempted. 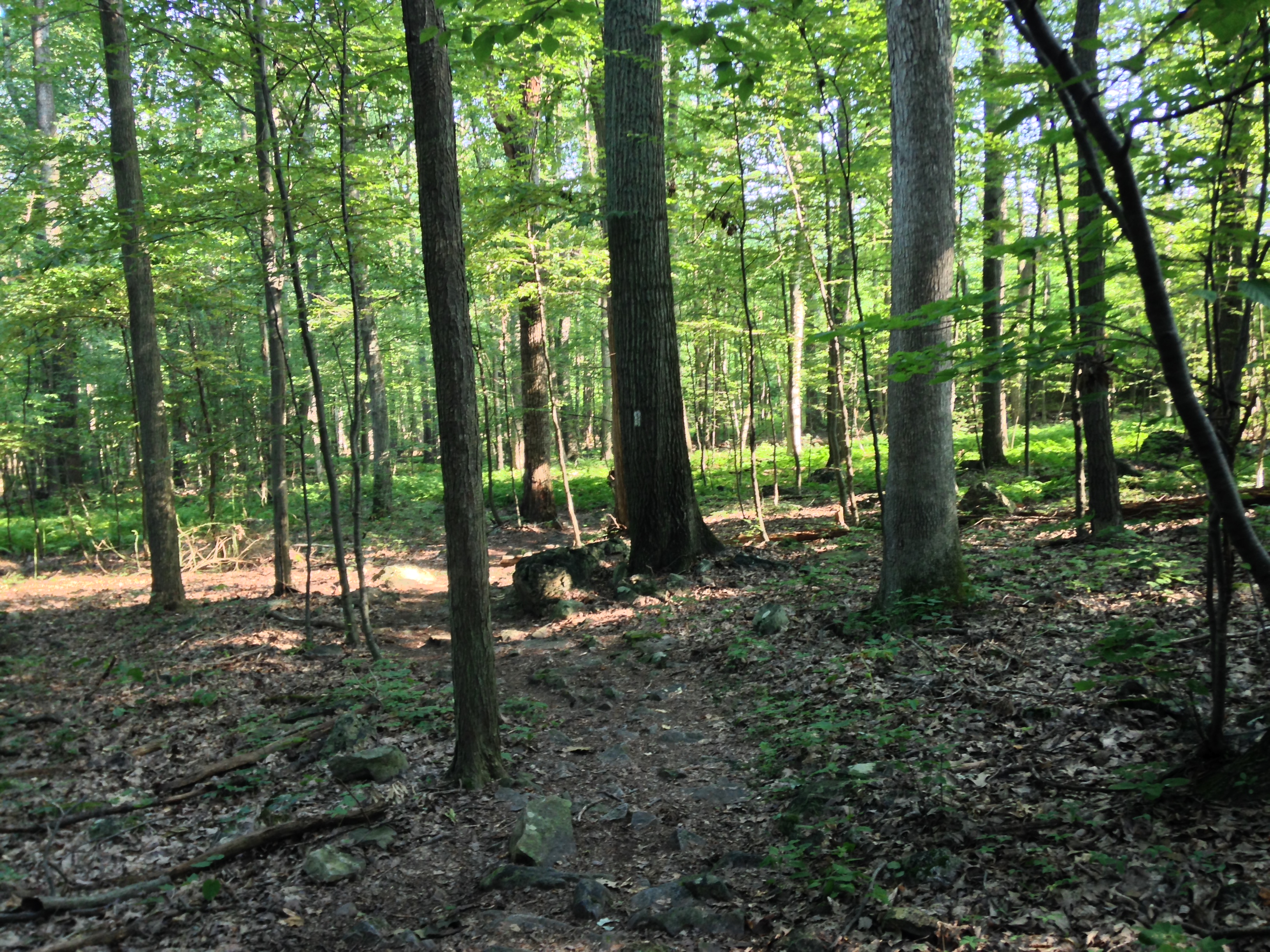 The problem with all these photos is that the woods look so cool and inviting. They aren’t. They are hot, and the shade makes them only marginally less hellish than open fields.

Okay, no, you’re right, I wouldn’t be. Not much anyway. So anyway, it was really hot today. I met the trail maintainers for the Tumbling Rocks Shelter at the midway point for the day, and we chatted for a bit. Their shelter is quite nice, large and clean with a covered cooking area, but they admitted that they had a friendly rivalry going with the Innkeeper, who maintains the Quarry Gap Shelter to the north, and they are trying hard to keep up. Quarry Gap Shelter is pretty famous along the AT for being nice. Really nice. After I panted my way up the last hill of the day I got to see how nice for myself. It’s beautiful, cool and shady, surrounded by rhododendrons and next to a pooled spring. The Innkeeper comes up most days to check the shelter, water the potted plants he puts there, and meet hikers (I had just missed him, apparently, which was a shame). The shelter has two covered cooking tables. It has a porch swing. A porch swing! It’s immaculately clean. Eleven out of ten, Innkeeper. It’s pretty amazing.

There was a group of hikers staying the night there from a local trail club, and it was nice to meet them, and hear some other hiker stories. I would have loved to zero there, but onwards! 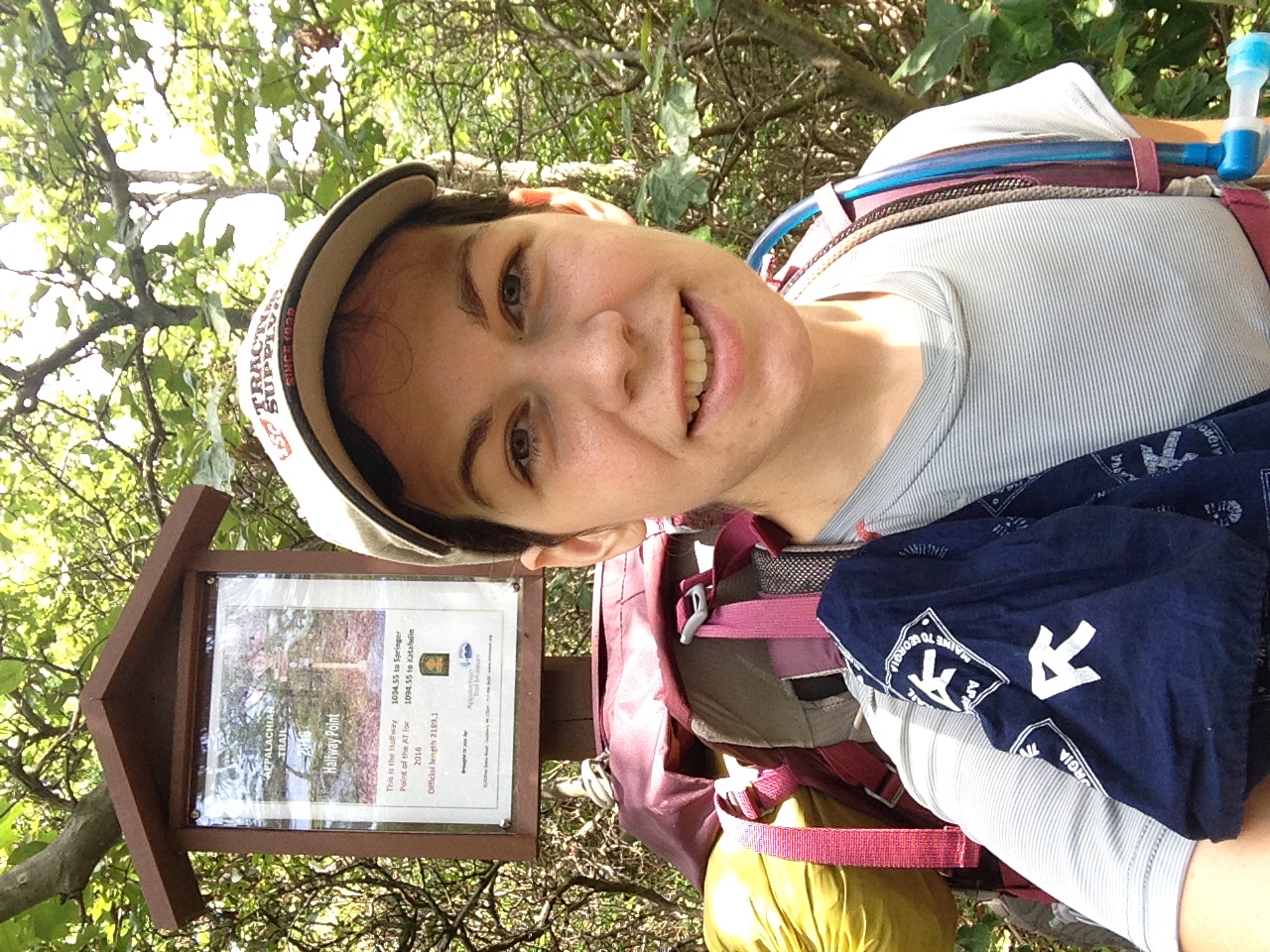 Very hot, very sweaty, but that’s the halfway marker behind me.

Today, I passed the official halfway point for 2016. Yup! From here on out, it’s a countdown, and to celebrate I stopped at the General Store in Pine Grove Furnace State Park to attempt the half-gallon challenge, in which a hiker attempts to eat a half-gallon of ice cream. I failed pretty miserably, which is honestly a little reassuring to me, because it means my stomach hasn’t gone totally mutant on me yet. I retain a portion of my humanity. Of course, I maybe should not say that since both Councilor and Awkward Turtle, a young woman finishing her long section from Springer to the halfway point, both totally crushed their challenges. Sticks and The Girl couldn’t do it either, and Dulcey Girl had more sense than us and went for actual food instead.

There was a lake at the park, so we stayed for a bit, and then Councilor went ahead to check out some campsites Guthook (his trail app, he doesn’t use the AWOL guide) said were good. Eventually we found one that was a mile from the park, per my AWOL’s notes on camping regulations, and went down to the stream nearby to rinse some of the sweat off and generally splash around and have a good time. We got our tents set up in time to avoid the rain, and went to bed. Not a bad day.

Today featured a hazardous heat advisory up to 104, and potential for thunderstorms with hail and lightning in the afternoon or evening. Sounds like a good day to hike!

When I woke up, it was to discover that Sticks had walked all the way back to the general store and bought everyone coffee, then walked it back to the campsite, which is some pretty serious dedication to a nice gesture. Thanks Sticks!

Well, the heat advisory was real. By the time I got to the deli along the trail I wanted to eat lunch at, every part of me was soaked in sweat. I have never, ever been this funky. But the deli had A/C and I sat right in front of that arctic blast while I ate a huge sandwich and that made things a lot better. I was getting ready to go when Councilor and The Girl showed up, which is sort of a shame since I wanted to hike, but I keep missing opportunities to sit and chill. Different hiking schedules make things hard! I just didn’t want to get caught out in the predicted thunderstorm (you know my feelings) so I pressed onwards. And as it turns out I got to the campsite, and had time to set up my tent, chat a bit with Flannel Heart and Dawdler (I met them in the Shenandoahs and we’ve been leapfrogging ever since) and then put all my gear in my tent and crawl inside before the storm started.

It wasn’t as bad as predicted, and I actually napped through a lot of it. Councilor showed up after it was over, soaking wet, and The Girl and Sticks came in really late, after I was already asleep. It was nice, though, not to be someplace really stupid for a thunderstorm, for once. 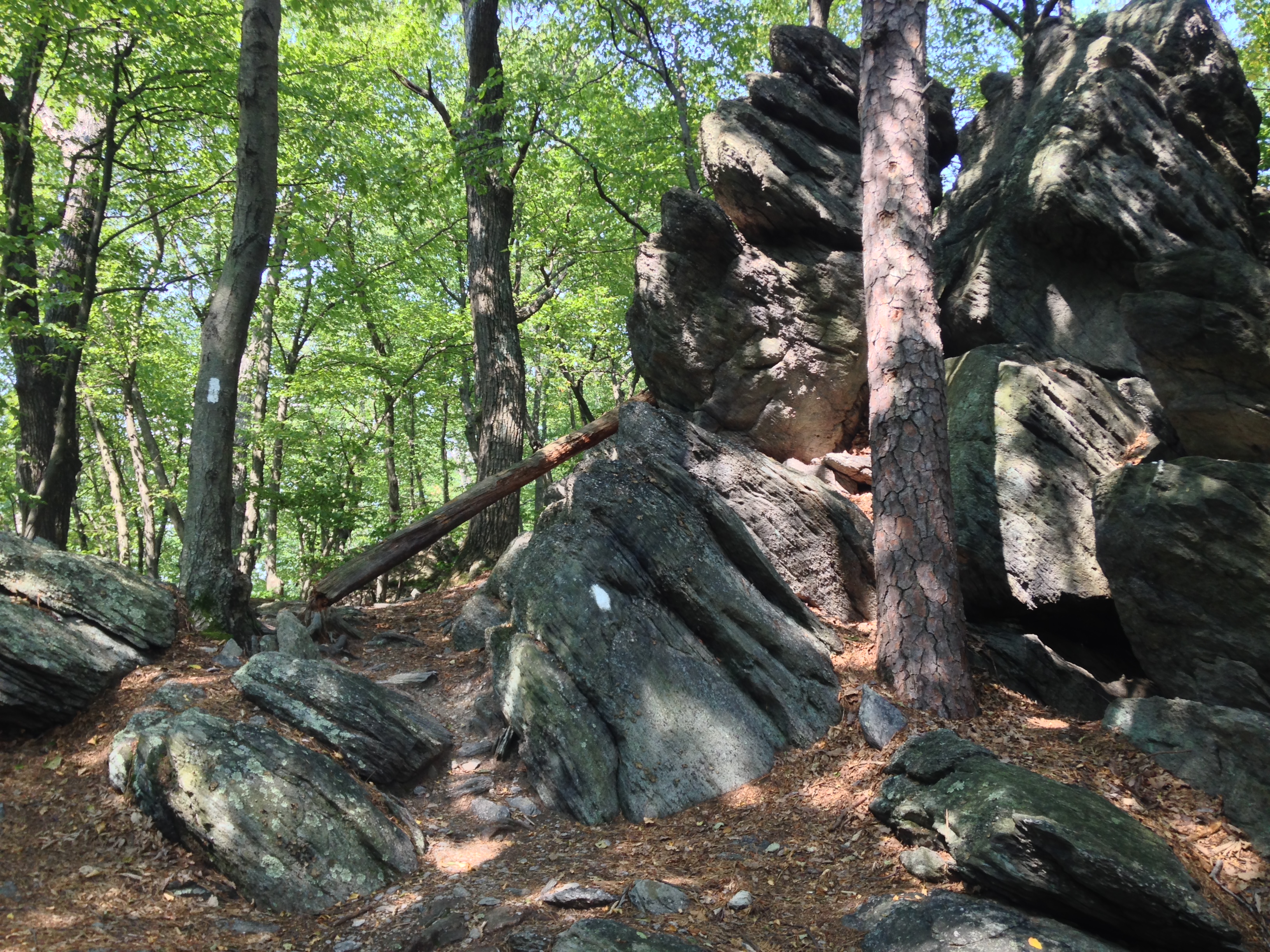 Today’s favorite moment was going through the “rock mazes,” two huge boulder deposits that the trail went through, rather than around. This is the start of the first one.