After a slow morning chatting with Zoe and Gramma we reluctantly left the comforts of home and headed back to the trail. It was already hella hot and humid when we started walking around 9:30 or 10am. Ugh. Plus our backpacks were heavy because we got way too much food when we resupplied. Double ugh.

We did hit the 1/3 way mark which gave us a good boost in the spirits! 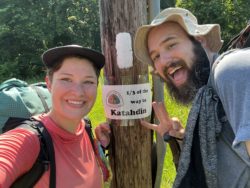 We pulled ourselves up the first climb and gratefully went in to stop at the shelter. The shelter had a clever rain water collection system as the water source. The water was yellow brown but it was cold and tasted fine after it was filtered. I immediately chugged almost a whole liter. Then we lazed about and snacked for at least an hour.

Our friends Jazzy and Blue Skies showed up! We hadn’t seen them since trail days and didn’t expect to see them since we knew they had been several days ahead of us last week. It was a wonderful surprise and great catching up with them.

Venturing out into the heat again was challenging. We stopped at the next water source and I chugged another liter of water. Pinky noticed a giant spider sitting on the tree next to me!! Isn’t she pretty? 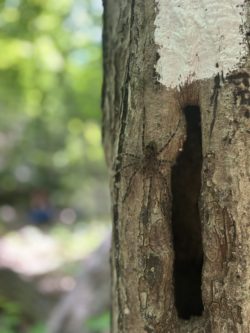 We only had about 3.5 miles left to the shelter where we decided to stop. When we had gone about 3 miles we found a nice campsite right next to a stream. That was good enough for us. We flung our packs down, took off our shoes and socks and stuck our feet in the cold water. Instantly we felt refreshed.

For the first time in a while we had the campsite to ourselves. Many people passed us, but nobody stopped for the night. Beans did stop for a break and a chat. We slept soundly with the sound of water in the background.

We woke up early and after stopping at the shelter to take advantage of the privy, started walking. It was already humid and we could tell it was going to be another hot day. Plus water sources were pretty far apart. We wanted to get a good chunk of the day done before lunch so we could take a long lunch break then hike later in the evening.

The trail took us up to the Blue Ridge Parkway for the first time! We had a great view and, more importantly, there was a fantastic breeze that stayed with us as long as we were up on the ridge. 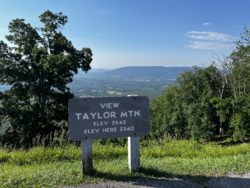 Around 12 something we made it to the water source where we wanted to siesta. There were 2 other hikers there. One of them told us the other had been robbed! Just a short while ago. We were right below the Blue Ridge Parkway. The hiker had left his pack up on the road and gone down to get water. While he was down there a truck drove by, someone got out and threw his pack in the back then drove off! While we were there the shuttle he was waiting for came up to take him to town.

We rarely hear about anything malicious happening on trail so we were shocked. We didn’t know the hiker and haven’t seen him since. We hope he’s able to continue his hike.

Other than the news of the robbery, our siesta was great. Relaxing in the shade and eating for two hours is a great way to pass the afternoon.

The next 6 miles continued along the ridge. Storm clouds rolled overhead, thunder rolled and we could see rain down in the valley. 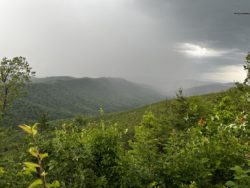 Fearing the worst we stopped to put our pack covers on and I put my rain coat on. The “storm” lasted about 15 minutes and hardly any rain came down. The rain coat did not last long but we kept the pack covers on as insurance.

By the time we made it down to the river we’d chosen as our dinner spot the sun was shining through the clouds. We dipped our feet again and enjoyed dinner with a view. Then on again for a last 1.7 mile climb up the ridge.

Camping on the ridge was a great idea. We had an almost constant cross breeze and, for the second night in a row, a campsite to ourselves. The only downside was hearing someone on their dirt bike or whatever just down the hill for at least an hour.

Now that it’s warm at night we like to sleep sans rain fly. It’s a dice roll though because storms can roll up or the morning can be dewy. On this night the sky still looked threatening so we put the fly on but didn’t stake out the vestibule, we just rolled it back so we could still catch the breeze. This was great until it started drizzling just as we were falling asleep!! We quickly threw out the two vestibule stakes then spent a slightly stuffy night… with no more than maybe 5 minutes of rain.

The morning was cool and overcast. I even wore my sweater until we left camp! Once again we wanted to start early and get as much hiking as we could done before it got hot. We were especially intimidated this morning because we had a climb up Apple Orchard Mountain. With its peak above 4,000 feet it was the biggest climb we’d faced in quite some time.

First, we stopped by the Bryant’s Ridge shelter. It’s one of the biggest on the AT! Look at that porch! 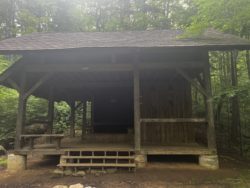 Lucky for us the climb wasn’t *all* straight up. Virginia believes in switchbacks. We got a few breaks in the grind but it was a long morning. We didn’t finish the climb until 2pm. Though we did take a long break at the shelter part way up. It has the nicest privy I’ve experienced on the whole trail. And the rhododendron around the shelter were amazing.

The rhododendron and mountain Laurel on this mountain in general were just magical. We walked through tunnels of them for miles and I was just in heaven. 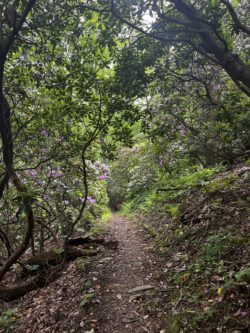 At the peak of Apple Orchard Mountain is an FAA communication tower that looks like Epcot. 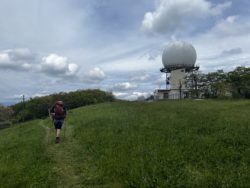 Also a small stand of pine trees and some big rocks. We rested in the shade and I climbed around on the rocks for a bit. 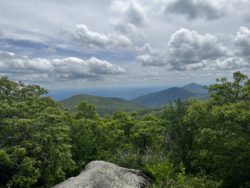 Then we headed down and to the next shelter for an incredibly late lunch. Boy was I hangry. The shelter was also surrounded by rhododendron and we saw a bunny while we were walking in! While we were eating a deer poked her head out of the woods and looked at us! Once she had decided we were not a threat she ambled on and walked all around. We enjoyed watching her. 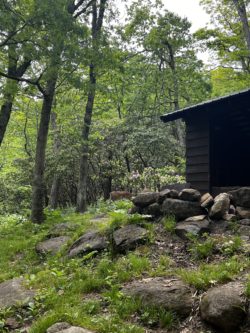 Another bunny hopped out and around nearby plus there were tons of birds. We had a lovely wildlife watching sesh.

Despite the lateness of the hour (we finished eating around 4:30 or 5pm!) we still wanted to get a few more miles in so we’d have less to do into Glasgow the next day.

The walk to the nights campsite was lovely. I love walking between 5-7pm. The light is so beautiful. We took a brief pause at an overlook but mostly just cruised on in.

The campsite was nestled in a little hollow with a spring nearby. We set up our tent in a clearing with tall grass around us. We were tired and climbed in our beds as soon as we set them up. Pinky did not get up for dinner but I had a second dinner.

In the morning we slept in and had a lazy morning with breakfast in bed. The other two hikers there had left before we even opened our eyes !

We had an easy 12 miles into Glasgow. When we were almost there, walking along the banks of the James, we saw a very large black snake! He was very scared of us but did not know how to get away, there was a steep grade on either side and he didn’t seem to love his options. Pinky got by while Mr Snake made a few threatening motions but it took me longer and us successfully getting him off the trail enough for me to pass… he was the most aggressive snake we’ve seen so far. 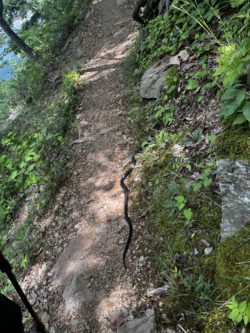 Making it to the James River Foot Bridge felt really good. The James river runs across the state and into the Chesapeake Bay. Our hometown, Richmond, straddles the river. At home we spend a lot of time recreating in and around the river. We joked that if we floated down for just a few days we’d make it home. It was cool to feel close to home in this way. 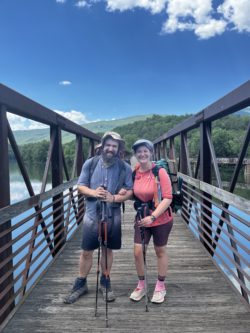 On the other side of the foot bridge (the longest on the AT!) we met a guy with beers, fruit and chips! We each gratefully drank a beer and ate some snacks.

Charlie from Stanimals drove up and after some conversation we agreed to a ride with him to the hostel for $5. Charlie took us to Stanimals so I could pick up a package- a new hip belt. I’ve lost so much weight that my current hip belt was maxed out and my backpack was still sliding down.. so a downsize was needed.

On the way to Stanimals Charlie gave us a tour of Glasgow. 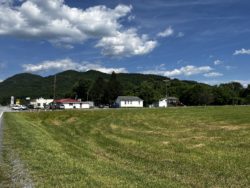 The town is about 0.5 miles long. There is a gas station, a grocery express, a dollar general, a bank that’s not a bank, it’s a weed store! A laundromat, one restaurant (Scotto’s!) and behind that, the free city sponsored hiker shelter with an out door shower! Glasgow doesn’t have much but it does have everything a hiker needs within a 3 minute walk.

Needless to say we spent the night at the shelter and took full advantage of all of Glasgows amenities. We got a massive pizza at Scotto’s then beer from the grocery express. We hung out at the shelter with the other hikers and had “chess club.” Pinky broke out his board and we learned Foghorn and Twigs have a board too! So we had two games going at once! (The game between Twigs and I was far less contentious than Pinky’s games with Sauce and Newton..)

Tuckered out by all the pizza, beer and chess we headed to our tent for bed around 10. The pizza and beer apparently had the opposite effect on other folks and at about 10:30 someone brought out a speaker and swing dancing club started up! My earplugs did not cut it and by 12:30, when Pinky had been asleep for at least 45 minutes and I was good and cranky, I went asked them to please shut it down. Finally, I joined Pinky in dreamland and sunrise came far too soon, as it always does..