Well, today wasn’t quite what Councilor and I thought it was going to be, haha. We made it into Palmerton to do laundry and snag a shower, which was definitely part of the plan, and then we stayed overnight, which definitely wasn’t. It was one of those decisions where we made up a bunch of terrible justifications for it, but really we were just enjoying not going forward. Oh well, I have absolutely no regrets about the stop or anything else that day; we had a lot of fun and there are going to be plenty of opportunities to challenge ourselves in the north, so I’ll take this break for what it is. We stayed at the hostel behind Bert’s Steakhouse, and that was a great deal. The steakhouse itself does really good, inexpensive food, and the bunk room is bare bones but had a really comfortable couch, and it was only $10. Totally recommend.

First thing out of Palmerton is the climb up Lehigh Gap to the Palmerton Superfund site. Councilor and I got a lift to the trail head from a super nice woman with her daughter, and as we were heading up we met a man coming down to his car in pretty bad shape. His trekking poles were destroyed, and his left arm was bloody and he held it at a strange angle. We asked him if he needed any help and he told us he was fine, but he had fallen 20-30 feet down the cliff, and was on his way to the hospital. It was a little bit of an ominous way to start the day. But the climb up, while strenuous, was kind of fun, part hike, part rock-climb, and we made it to the top without incident. The views down to Palmerton and the Lehigh River were pretty good, but the ridge line is pretty exposed and it was hot, hot, hot. I also saw my very first rattlesnake of the hike, curled up on the side of the trail. Councilor warned me it was there or I might have walked right past it without even noticing. Yikes!

This is part of the trail out of Lehigh Gap, and it’s pretty much vertical. So much fun.

Honestly, the rest of the day is a bit of a blur for me. The heat was really something. I remember being glad to get to the shelter, with very tired feet.

Ugh these ROCKS. I have had it, Pennsylvania. I know I was talking about perspective earlier but you and I are breaking up today. I think that in terms of just being exhausted, this state has been the hardest. I am sick of the heat, of the dry springs, the bugs, and never being able to just walk and enjoy it. The good feelings of a few days ago were gone this morning, but you know what? It’s done. I’m in Delaware Water Gap today and it’s all good, PA is done. Sticks and Girl are back, we are together, we can hit up NJ now.

I met some new folks in DWG, a nobo sectioner named Walstreet and a sobo named Box (who shares my love of milkshakes) and one or two others. The bunkhouse had room in it, but Councilor, Sticks, Girl and I discovered a shelter built out behind the church hostel and immediately opted for that. I think we’re losing our domestication.

DWG is a pretty little town, and a nice place to spend the night, but I am dying to get out of PA. I hear the NJ section is really nice and I’m looking forward to seeing it for myself.

A skunk visited us in the shelter last night! I had woken up at one point and was out in the parking lot when I saw it amble up to the edge of the shelter and sniff at Councilor’s hair. It moved down the line to Sticks and The Girl, and then disappeared around the side of the shelter. I breathed a huge sigh of relief and climbed back into my sleeping bag.

Later on, I woke up to hear Sticks barking like a dog. The skunk was back and he was trying to scare it away. I almost died trying not to laugh, but at the same time, I really, really was afraid the noise might scare it into a defensive spray, in which case I was going to murder and bury Sticks. Thankfully the skunk moved on without incident, so Sticks escaped his brush with death.

I left first this morning. I won’t see Councilor or Sticks again for a bit, because those two MADMEN are planning to try to hike all 72 miles of the NJ section in one go. It’s insane. The Girl will be hitting the trail today and hopefully I will see her at camp tonight, although she hasn’t shown up yet.

The trail today fulfilled all my hopes for NJ. There was a lot more variety in terms of terrain than there has been in PA, starting with the bridge over the Delaware River. From there I hiked up a long slow hill to Sunfish Pond, which is the first pond I have seen trail-side all hike.

I passed through woods, next to swamps, under fire towers, and most wonderfully of all enjoyed trail that had a reasonable number of rocks in it. I almost cried from joy. Yeah, there is still rocky terrain here but it is so much more manageable. I met some kids who were working as camp counsellors and had fun talking to day hikers of all kinds. It was a great day, but my slightly late start meant that I did some of my first night hiking.

I do not like night hiking, as it turns out. Some hikers do but I hate not being able to see the woods around me while I walk, it feels like wasted miles. I hit my campsite, just south of Rattlesnake Mountain, around 10:30 and threw my bear bag, pitched my tent, and climbed straight in. Long day, good day. It’s weird being alone again after so long though. I hope they make it through NJ okay and that The Girl makes it here.

Okay, so no sight of The Girl, I guess she must have stopped earlier. Today was sort of fun, but I spent a fair amount of time just lolling around at the shelter where I stopped for lunch. The weather was so perfect and it was such a nice afternoon that I ended up sitting there for two hours, so I had to hike through the dark again, and I’m disappointed about that because I think I missed some good things in High Point State Park. 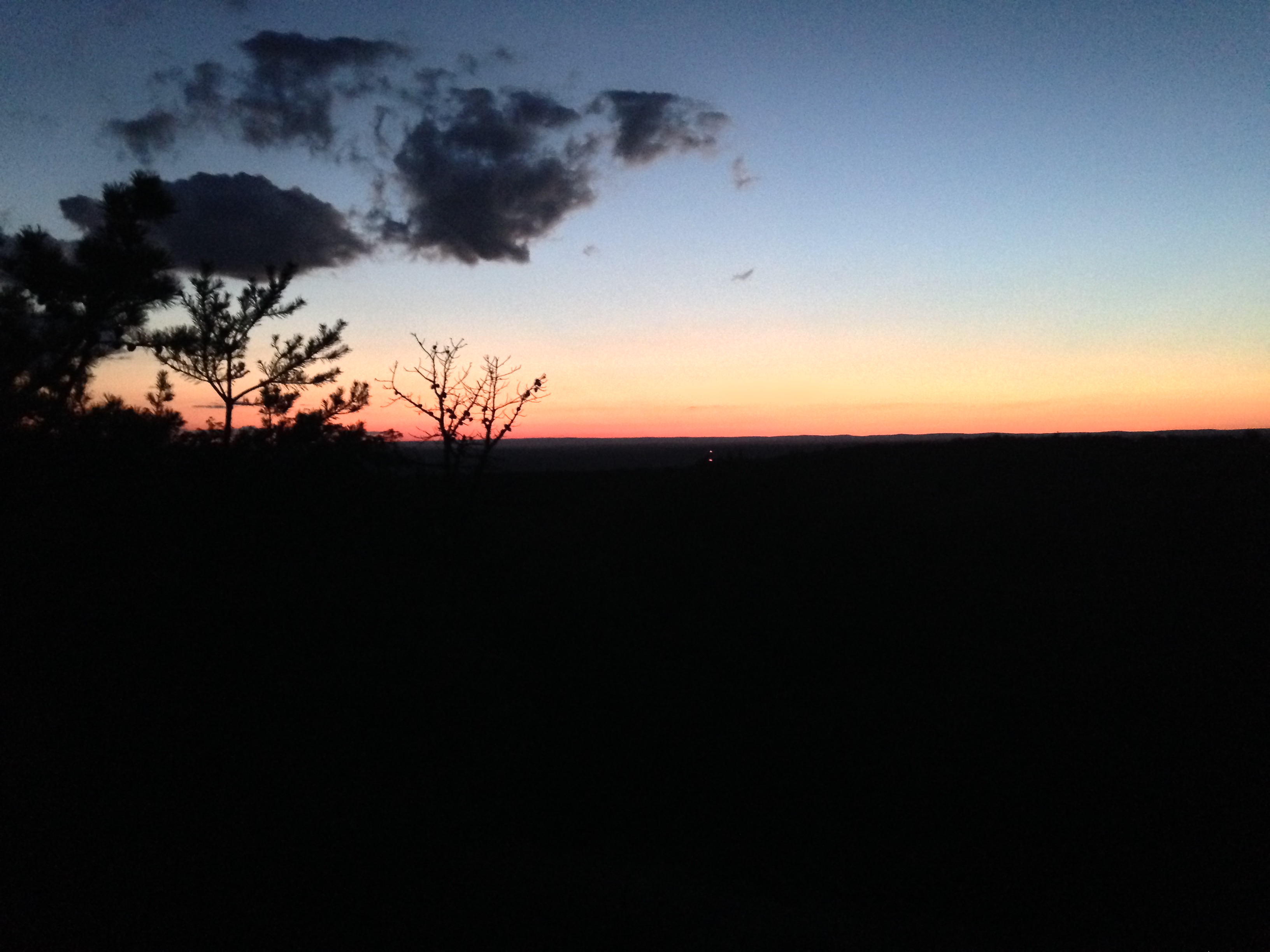 Sun is setting but I still have a way to go.

I was pretty tired by the time I got to High Point Shelter! When I hit the turnoff for the shelter trail, I was moving very slowly. I have the shelter to myself, although I could see a tent nearby when I got in. Anyway, another 23 miles down! Bedtime.