I left off in Hot Springs, after completing GSMNP and looking forward to attending Trail Days in Damascus (otherwise known as “Trail Daze”). I’m on limited computer/town time so this isn’t going to be a day-by-day update, but I’ll try to hit all the high (and low) points since then.

We took a very much needed zero day in Hot Springs, stayed at the (not so) charming Alpine Court, and got some much needed rest and town food. Feeling rested and probably foolishly elated from our arrival and stay in town, we decided to shuttle back up to Max Patch, where we’d gotten off the previous day, and do a 20 mile slackpack back to Hot Springs. Hah. We who, previously, had done nothing more than 13-14 miles in a day and even that was ambitious. So we headed off bright and early that Wednesday morning and started the brisk walk up to Max Patch and then down the trail back toward town. And we walked. And walked. At first it wasn’t bad. It wasn’t even bad after 10 miles. Or 12. Or even 15. It wasn’t until about mile 17 that I started to feel like there was a possibility we wouldn’t be able to make it. Oh, wait, we didn’t have a CHOICE but to make it. Goldilocks’ knees were acting up only 8 miles in so I loaned her my knee brace. Wrapped in an ace bandage, MY knee seemed to be holding up OK but the rest of me was ready to be done. When I finally got back down into town, I was beat. I have never known exhaustion like I felt that day. Everything hurt, my feet felt like they were going to fall off, and I wasn’t sure my knees would ever be up to hiking again. BUT… WE DID IT! Our first 20 mile day. Who cares if it was just slackpacking?? Oh, and the laurels bloomed while we were in town, so those last 3 miles were spent walking among them, and despite my fatigue, I found a state of  euphoria as I made the long descent back to Hot Springs. Upon reaching town, my awesome friends Lorraine and Jacob arrived and I quickly forgot about my grueling day and started fantasizing about our upcoming trip to Damascus. 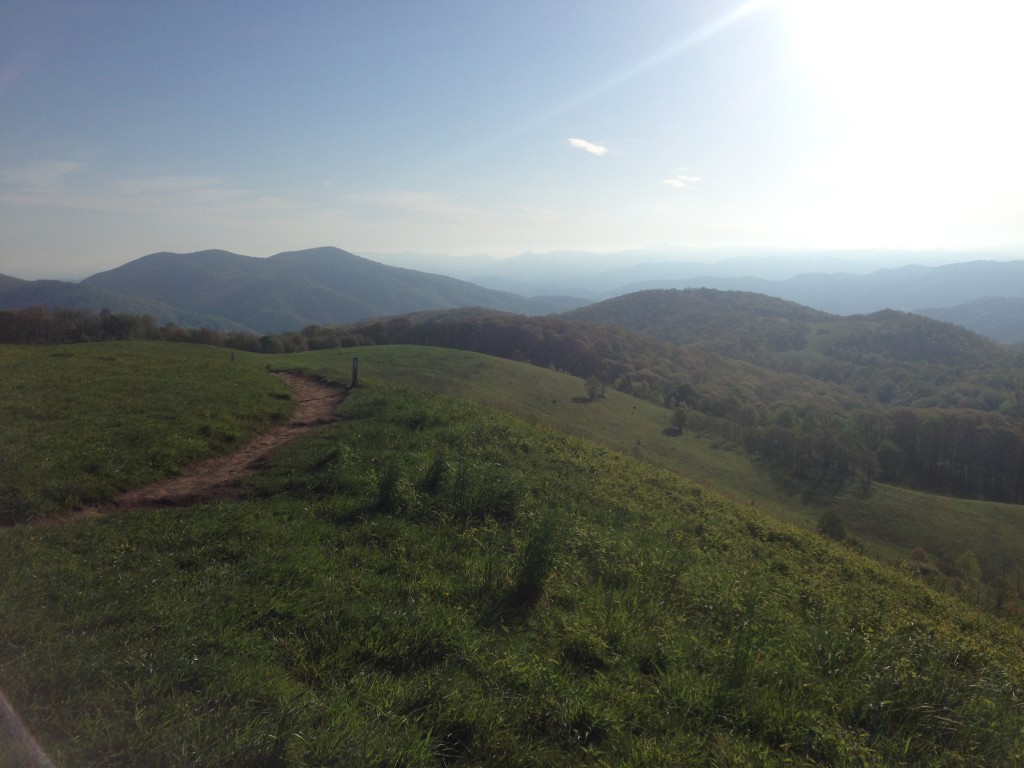 View from Max Patch early in the morning.

So I went to Trail Days last year. It was what solidified in my mind that I WOULD in fact hike the AT. A friend and sorority sister who thru-hiked in 2013 invited me and I had the best time of my life. I was super excited to go back this year as a thru-hiker, and it was everything I dreamed of and more. I got to spend the 4 days with my best friend (another shoutout to the amazing Lorraine aka Rain who made this entire weekend possible), many of my trail family, and many new and old friends. I got a new underquilt for my hammock after spending too many cold nights in it over the last couple of weeks (shoutout to Hammock Gear, because I have not wanted to leave my hammock since getting one of these amazing quilts), I got an awesome tan, I got another hair wrap, and I left still buzzing with energy from a weekend spent surrounded by hikers and AT culture. I think attended Trail Days is really a huge part of a thru-hike. Yes, it’s a huge party atmosphere, but its also so much more than that if you let it be. The generosity of the community, especially the church groups that came together to create hiker feeds, offer massages and hair cuts, provide free showers, give medical attention, and so much more absolutely blew my mind and restored my faith in humanity. 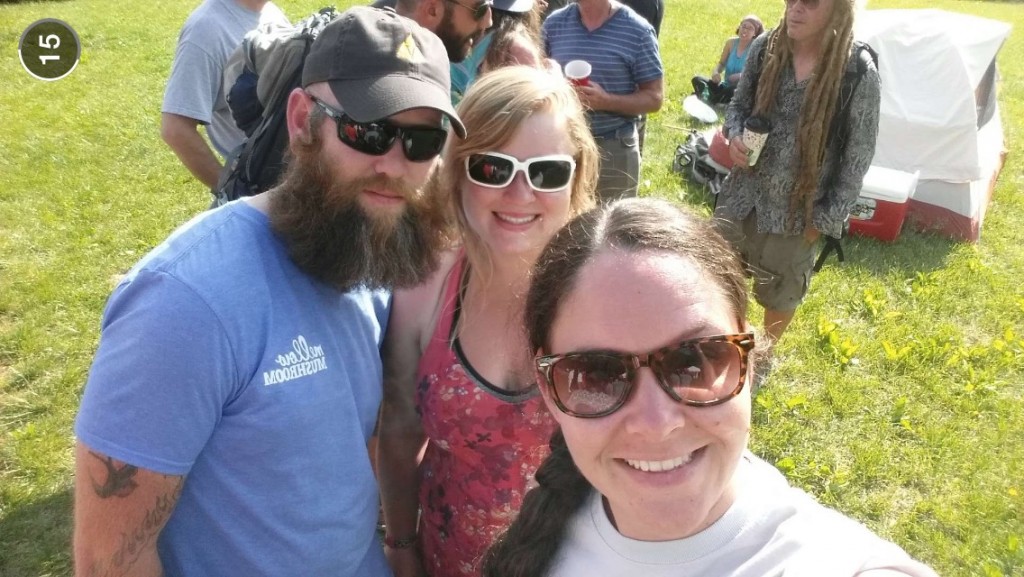 One of the few non-blurry non-ridiculous photos from Trail Days: Yukon (Jacob), me, and Rain (Lorraine).

The three days or so following my return to Hot Springs and return to the trail were rough. Honestly, I can’t even express in words how bad they were. Things started out well with staying at Elmer’s Sunnybank Inn, which I highly recommend because this is one of the coolest places I’ve seen on the trail so far. Super hospitable and a ton of history in this old home. Then, things turned sour.

Our room at Elmer’s Sunnybank Inn was beautiful, comfortable, and full of living history. Definitely stay here if you have the chance.

The first day out of Hot Springs I would have just about rather been anywhere else than on that mountain. The slight inkling of trail legs I’d aquired before Trail Days: gone. The energy I’d had leaving the event: gone. Two of my hiking partners: gone (Marietta decided to hike SOBO from Damascus for a change of pace and scenery and Goldilocks had to take a week of to heal her knees). My two amazing friends who joined me for Trail Days: gone. I was just NOT feeling it. Then we got caught in a thunderstorm and I was completely over the day. Set up camp where we were and I was done for the night after only about 8 miles. 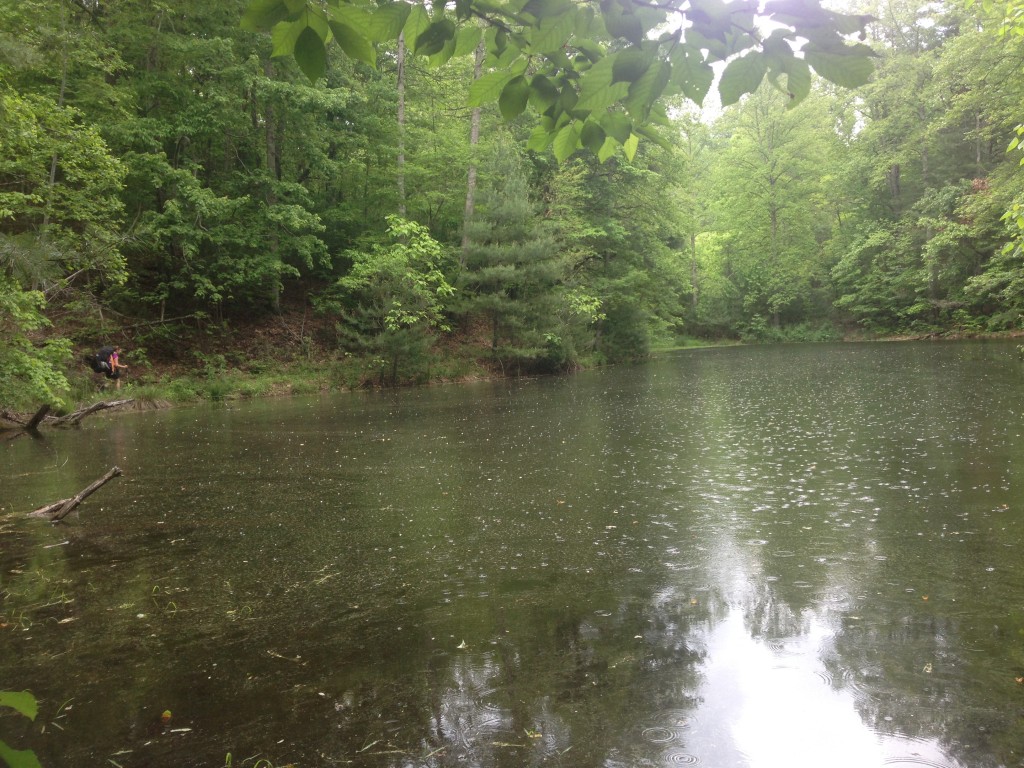 This odd, dammed up pond was right before an interesting series of gravel road walks on our first day out of Hot Springs. Interesting, different terrain from what we normally see. You can see the rain drops hitting the water and Hiccup walking on the other side if you look closely.

I’d like to say the next day was better but it wasn’t. I felt OK first thing in the morning despite the rain that still drizzled from the gray sky, but my mood quickly turned sour for no reason that I can define. Maybe it was some sort of post-partum depression coming down from my Trail Days high, maybe it was the extra weight of my pack after resupplying, maybe it was being two hiking partners short. I don’t know but I was miserable and I wasn’t having fun. I also nearly fell off a cliff due to some tricky footing and that gave me a minor heart attack. I’m pretty sure I would have just stopped and gone to the hostel for the night if it hadn’t been for Mom’s store. Now, I’d heard conflicting reports about this place, regarding it’s quality and even whether or not it was open. Let me just say, Mom’s may look like a condemned building but inside were two of the most genuine small-town southern folks I’ve ever had the pleasure of meeting. They entertained us with stories for about an hour and a half while we stuffed our faces with Hot Pockets and Honey Buns and Hot Dogs and Sodas. This place saved me and instantly put me in a better mood. I made it 4 more miles that day instead of stopping right there like I had felt like doing before. 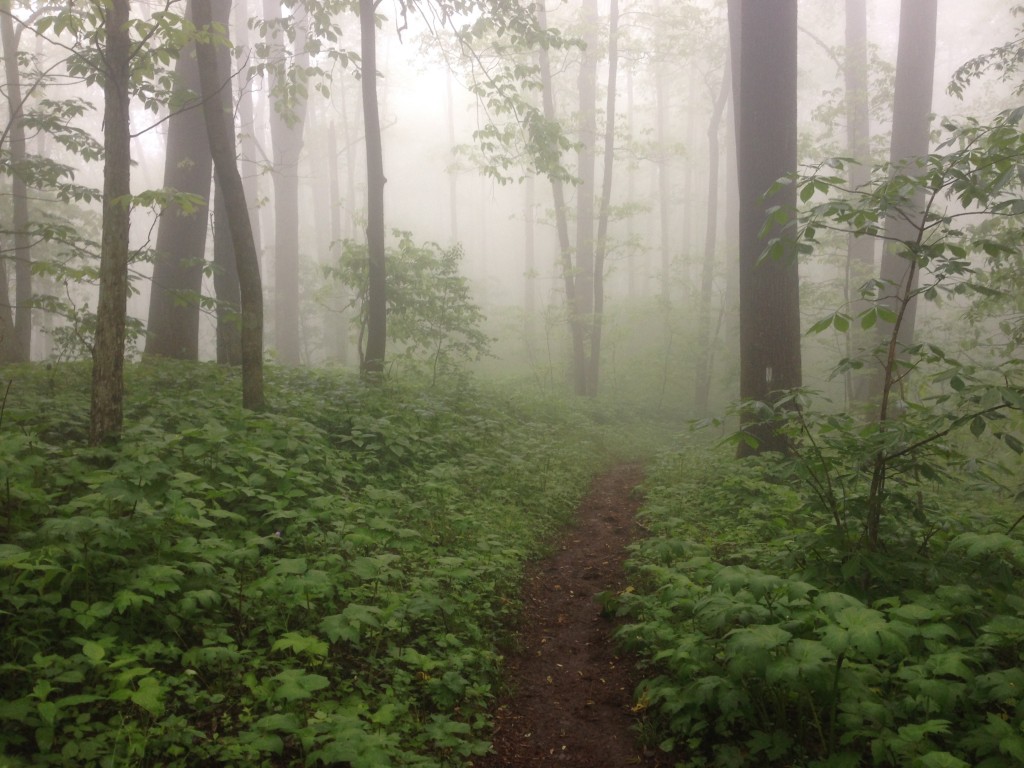 Walking in the rain and fog is dreary, but eerily beautiful at the same time.

I was still in a bit of a funk the next day, but my mood found a notable improvement with the weather and the fact that we crossed the 300 mile mark! I experimented and took a nearly 2 hour break for lunch. I plan to start doing this every day because it made a huge difference in my mood and level of fatigue. Hiccup and I hiked with Dynamite most of the day, and it was nice to get to know him a little better, as we’d been in camp with him several times. 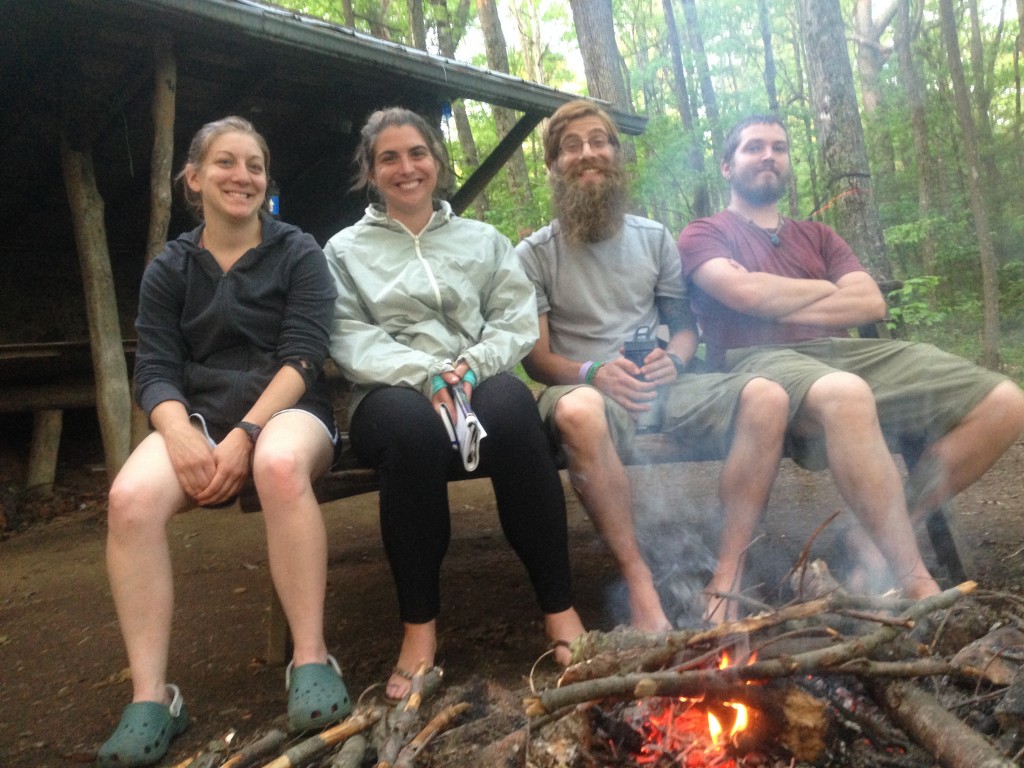 My favorite part of every day has become evenings around the campfire. Pictured L-R: Hiccup, Michelle (section hiking), Carver, and Balto

After three days of being in a total mood funk, contemplating seriously several times why I was even out here doing this to myself, I woke up on day 24 of my thru hike feeling pretty good. And that’s saying something, since a nice hard rain had set in overnight. I packed up in the rain, ate a cold breakfast, and started walking before 8 am. By 10:30 we had already done over 6 miles and reached Devil’s Fork Gap. Don’t think all of this ambition came from nowhere, though. I had several motivating factors. One was catching a ride to Laurel Trading Post for a desperately needed shower, laundry, and food. The other was that my college friend and roommate Amy and her poodle Nash were going to join us here to hike with us for the next few days. I was elated! All of these things helped my mood tremendously and by the early afternoon I was in a completely different state of mind than I had been the previous three days. I did 13 miles this day, my most since being back on after Trail Days. 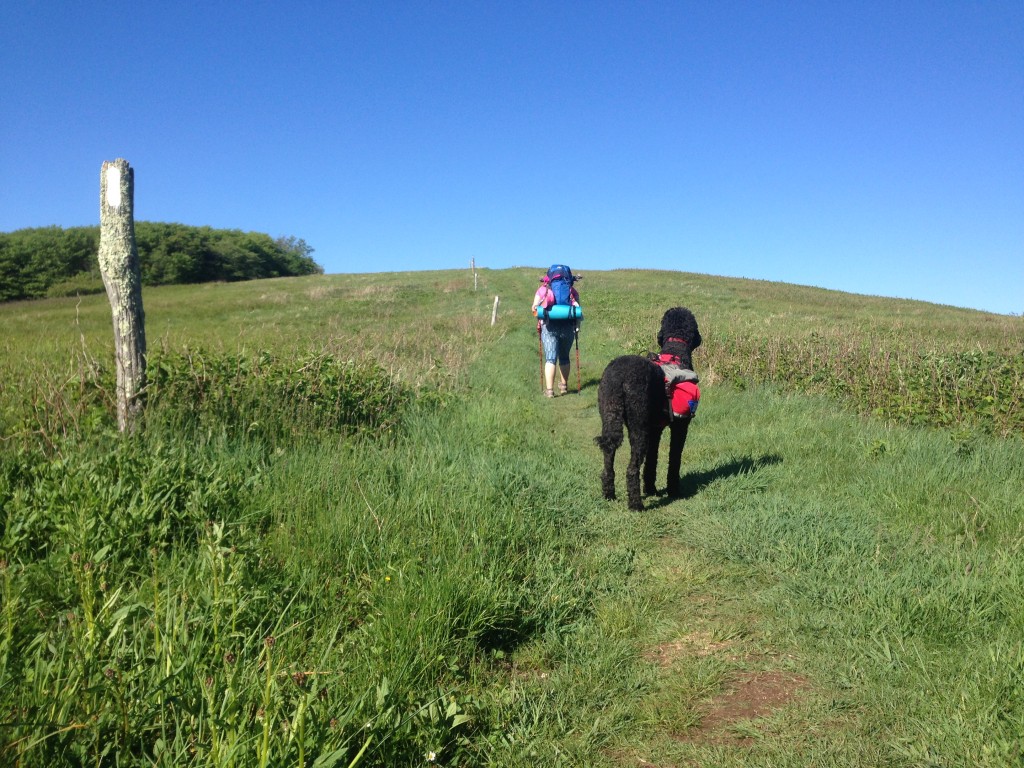 Amy and Nash head up the bald. Nash didn’t want to leave me behind.

Notable occurrences of the next 3 days:

To Erwin, and beyond!

So now we are in Erwin, 344 miles in, Amy and Nash headed home this morning, Goldilocks rejoined us this afternoon, and I’m ready to spend a couple of days relaxing with my trail family before heading off for Roan Mountain in a couple of days. I’ve had some major emotional and physical highs and lows over the last couple of weeks but I’m writing this update feeling good, and confident that I can keep going. Will try to update before then, but a definite update will come from Damascus when I reach town there in about two weeks.