I woke up early to the sounds of the birds chirping, and lay in my hammock for an hour relaxing. I could hear Rash and Piñata were up but staying in their hammocks too. We got on the trail by 8:30, later than we would have liked for a town day. The terrain was smooth starting out, but quickly became rocky and slowed us down. We did less than 2 mph the first hour because we were climbing over rocks, and we were all worried about getting to the town by the end of the day.

We had a few miles of flat terrain, and were trying to make up for lost time by going quickly. We stopped for a bathroom/snack break at a campsite, and I found another nymph tick attached on my leg. I sprayed my legs with Deet before we continued on. We found a huge black snake on a flat part of the trail. It was over 4 feet and the biggest one I’ve seen. 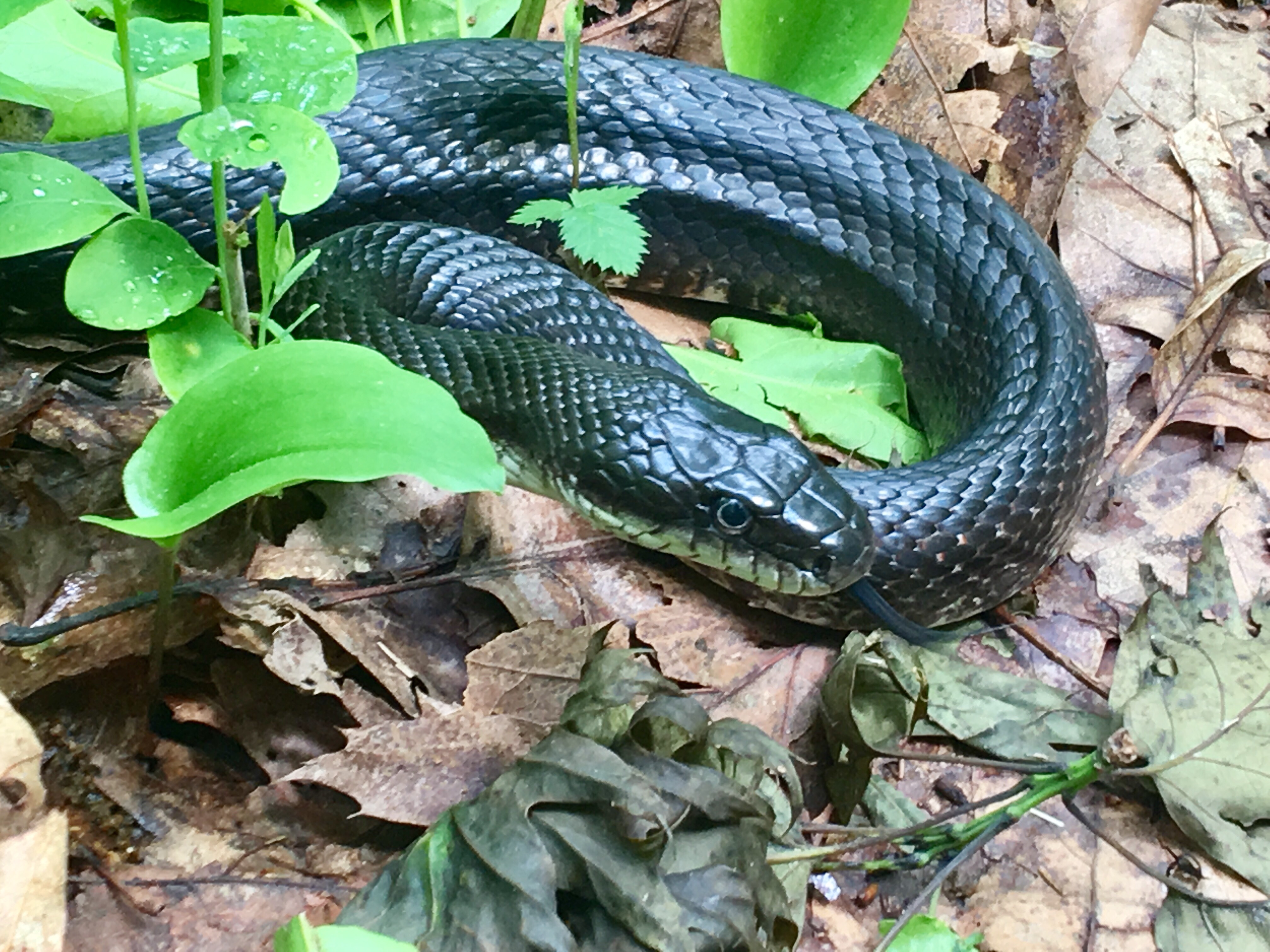 We came to Knife’s Edge, which is a huge rock formation the AT crosses over. We stopped at the top for a quick break, and a gummy wrapper flew out of my multipack and down a steep 10 feet. Climbing down to get it, I found a big black snake sunning on the rocks. Climbing up Knife’s Edge wasn’t terrible, but climbing down was almost impossible. The rocks were dry even though it sprinkled this morning, and I don’t think we would have made it across wet rocks. 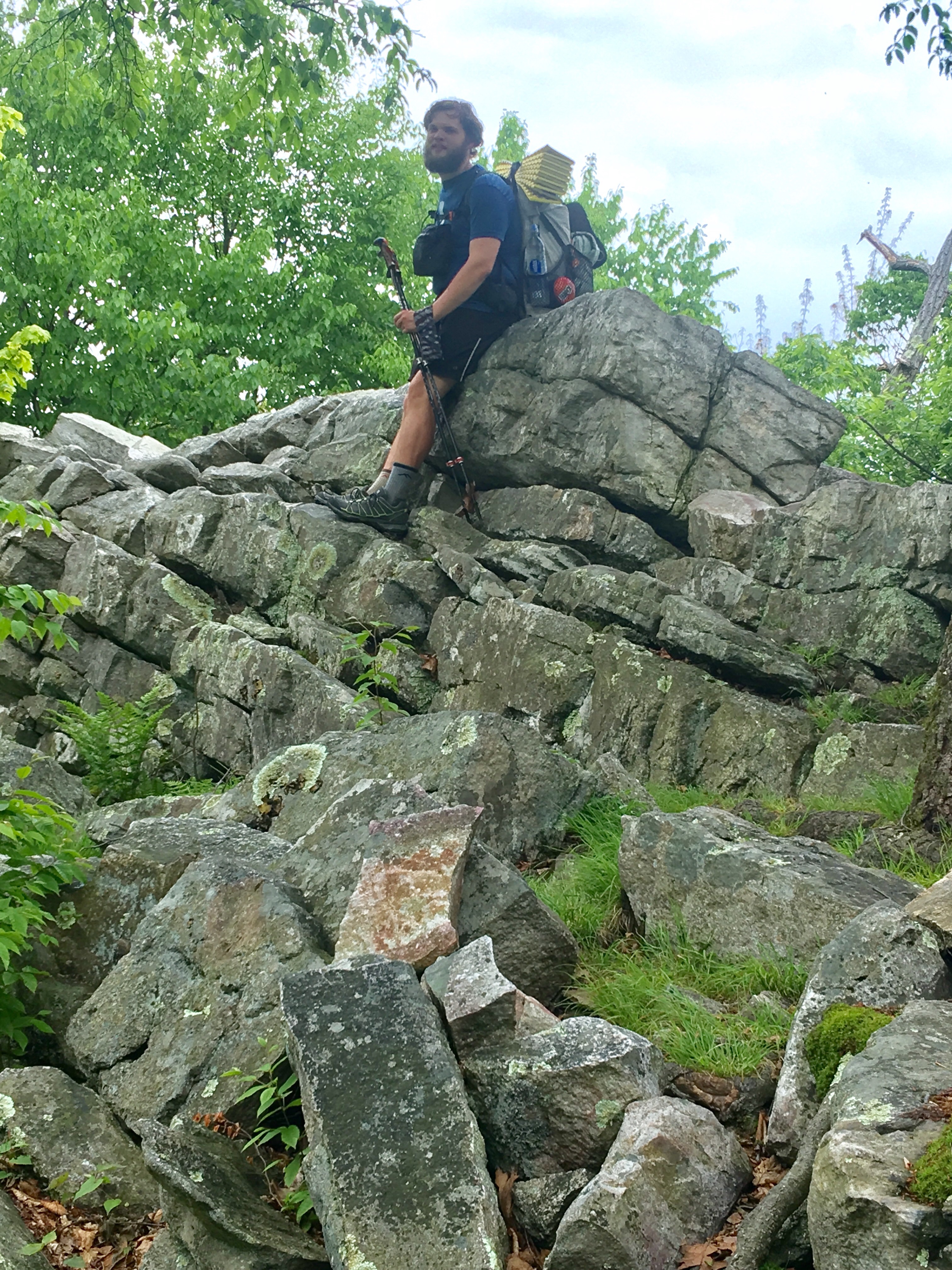 Rash near the top of Knife’s Edge 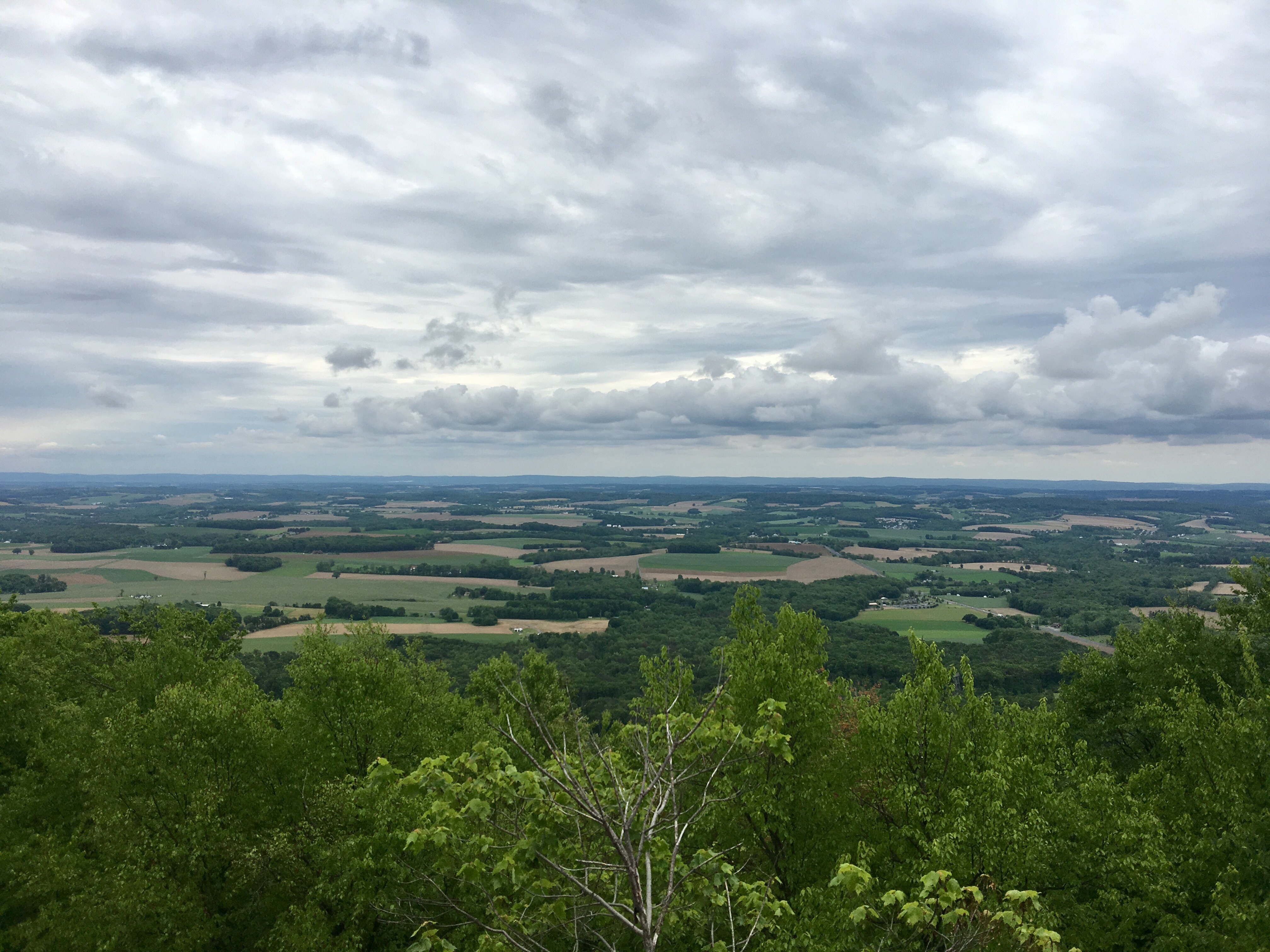 The gorgeous view from the top 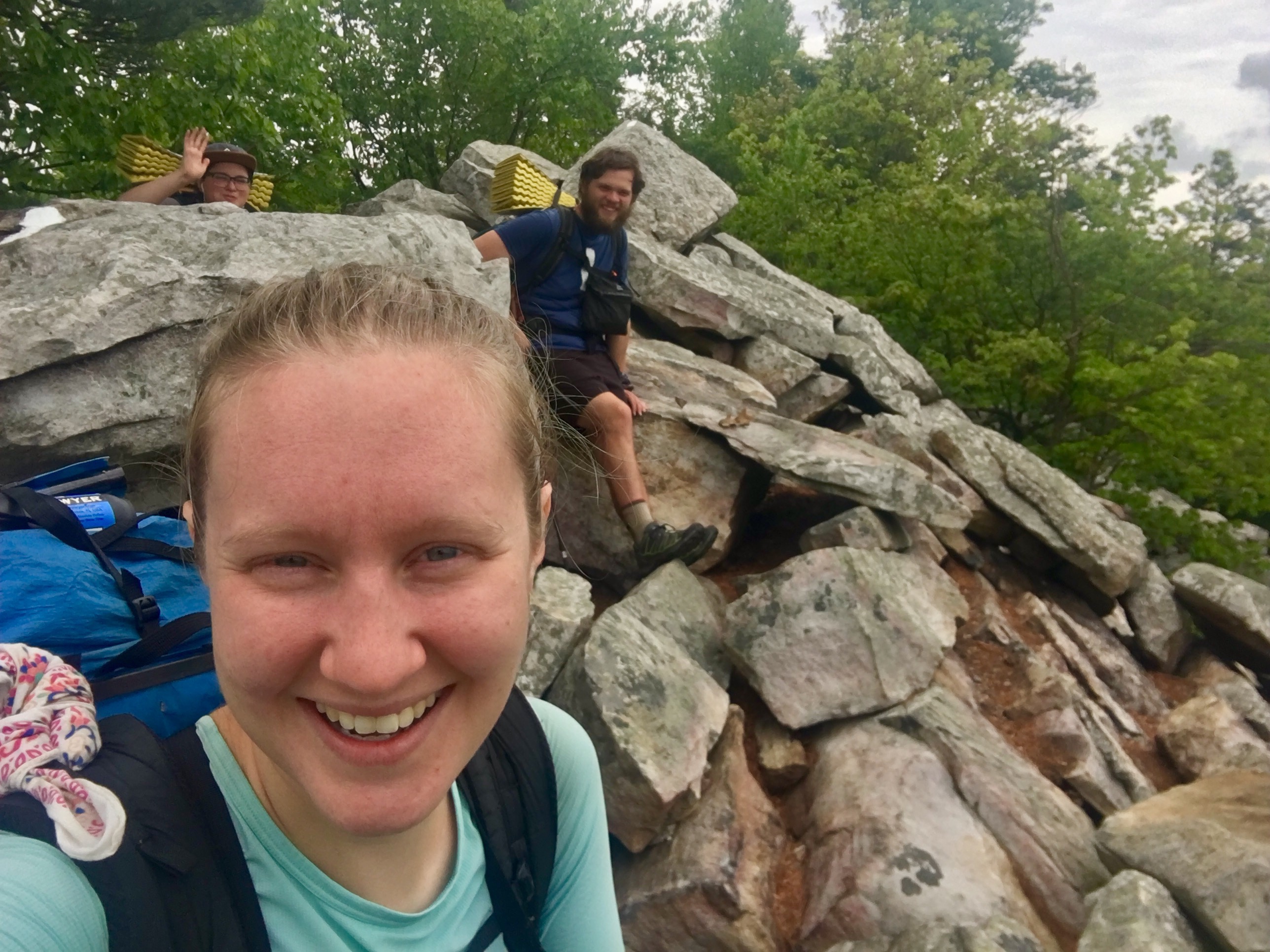 Selfie when we took a break 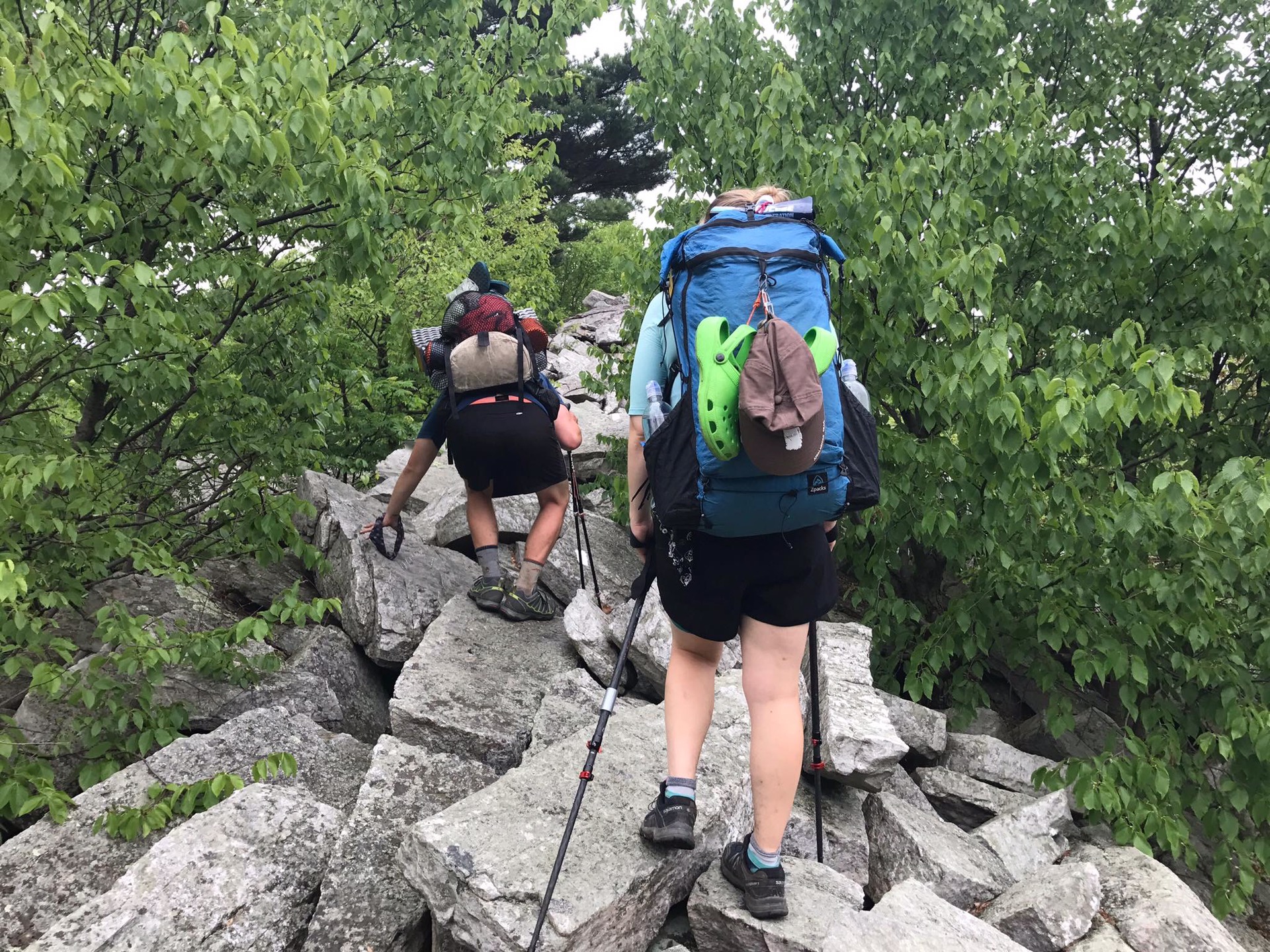 Rash and I trying the descent (picture by Kara Mast)

Once we finally got down in one piece, the terrain was still intermittently rocky for a few miles. We came to a parking area, and found a man in his car letting 2 day hikers out to their car. He recognized Rash and Piñata, and opened the back of his car to reveal donuts. He also pulled out solo cups and poured cold milk from a cooler for me and Piñata, and Rash had an orange crush soda. All trail magic I’ve had so far is awesome, but the cold milk and donuts really hit the spot. He was from the same area as Rash and Piñata and his wife follows their mom on Facebook. They had met earlier when they stopped to see their aunt and uncle in a parking area. 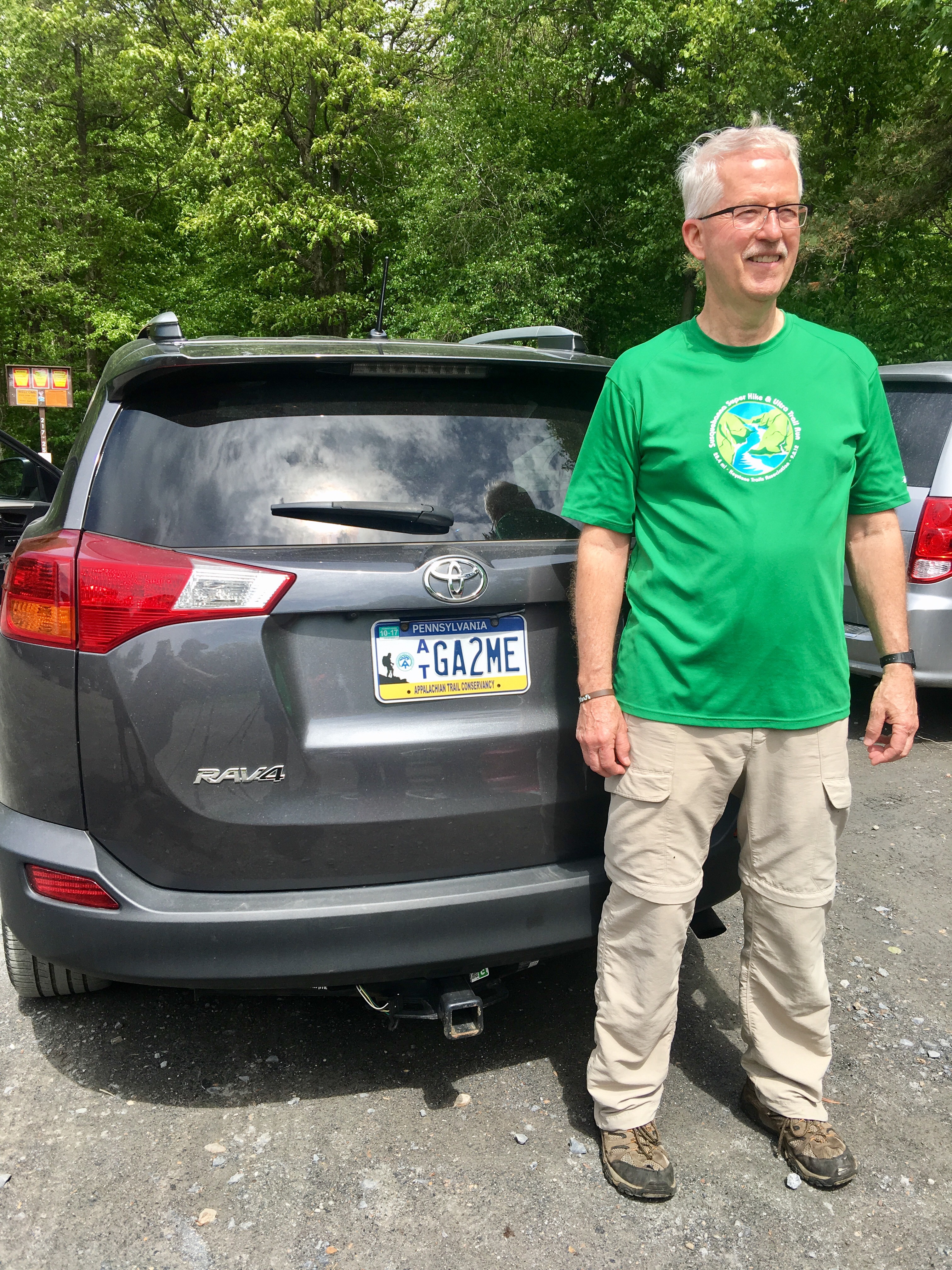 Iceman with his car (and his cool license plate) 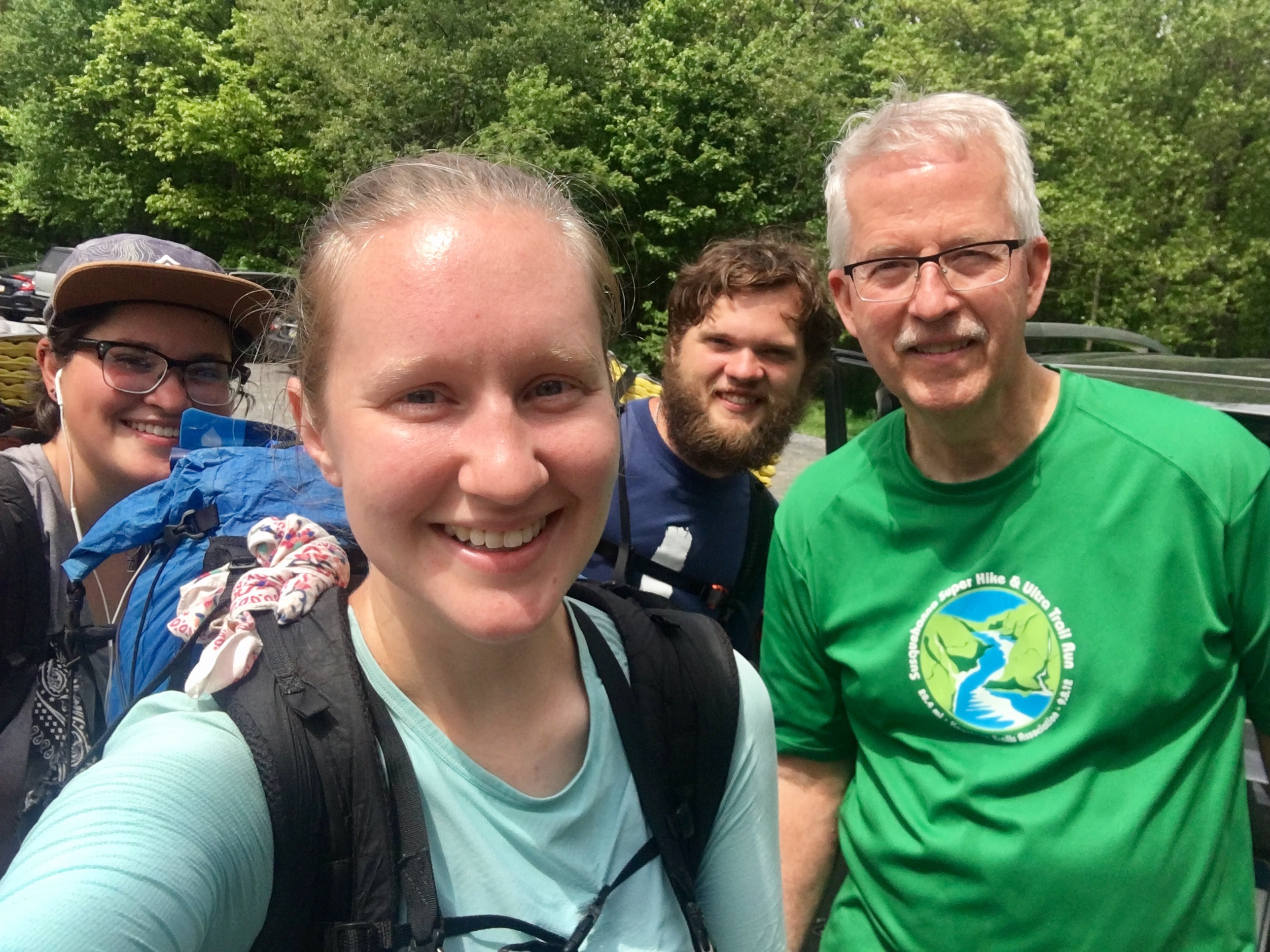 Group picture. We didn’t get a picture of the donuts because we ate them too fast.

After the donuts, we thanked Iceman and took a quick break on some large rocks in the parking area. This area was packed with day hikers, which we were hoping meant the trail ahead would be flat. We were right, and the next several miles were beautifully flat compared to the hellish morning of rocks. 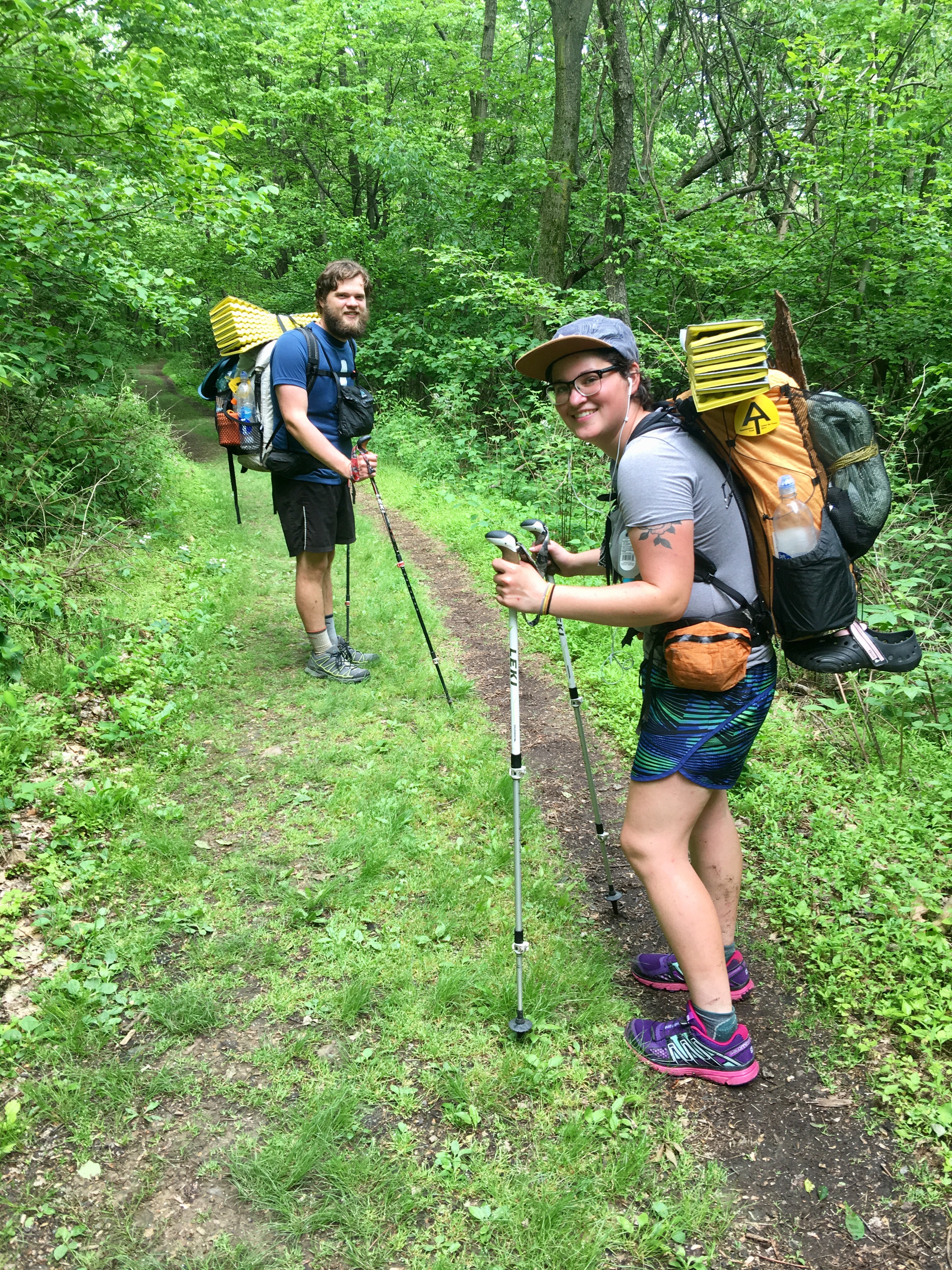 Rash and Piñata on the flat trail

The rocks returned intermittently, but nothing compared to the morning. We had been leapfrogging with a hiker named Madison who was doing a large section hike, and stopped to talk to him for a few minutes. We came across a beautiful corn snake, bringing my snake count for the day up to 5 (2 garter snakes, 2 black snakes, 1 corn snake). Snakes are becoming my favorite thing to find on trail. Corn snake that slithered away quickly

The last few miles were slightly rocky and downhill, but we were so focused on getting to the parking area that we hardly noticed the rocks. Chic’s minivan was waiting for us in the parking lot, and we piled in. At their house, Lovey and Laura were cooking hamburgers. We ate a wonderful dinner, had great conversation, and showered. We watched TV while our laundry washed, and then turned in.

We ate a wonderful breakfast at Lovey and Chic’s house before going to the grocery store to resupply. We didn’t need much since we were stopping in Delaware Water Gap in 2 days. The grocery store gave a piece of free fruit to hikers, and I got an orange. Outside the store, I met a French hiker from Lyon who was doing a month SOBO section starting at Delaware Water Gap.

We thanked Laura and Lovey, and Chic brought us to the parking area. We said goodbye and headed up the massive climb out of Lehigh Gap. 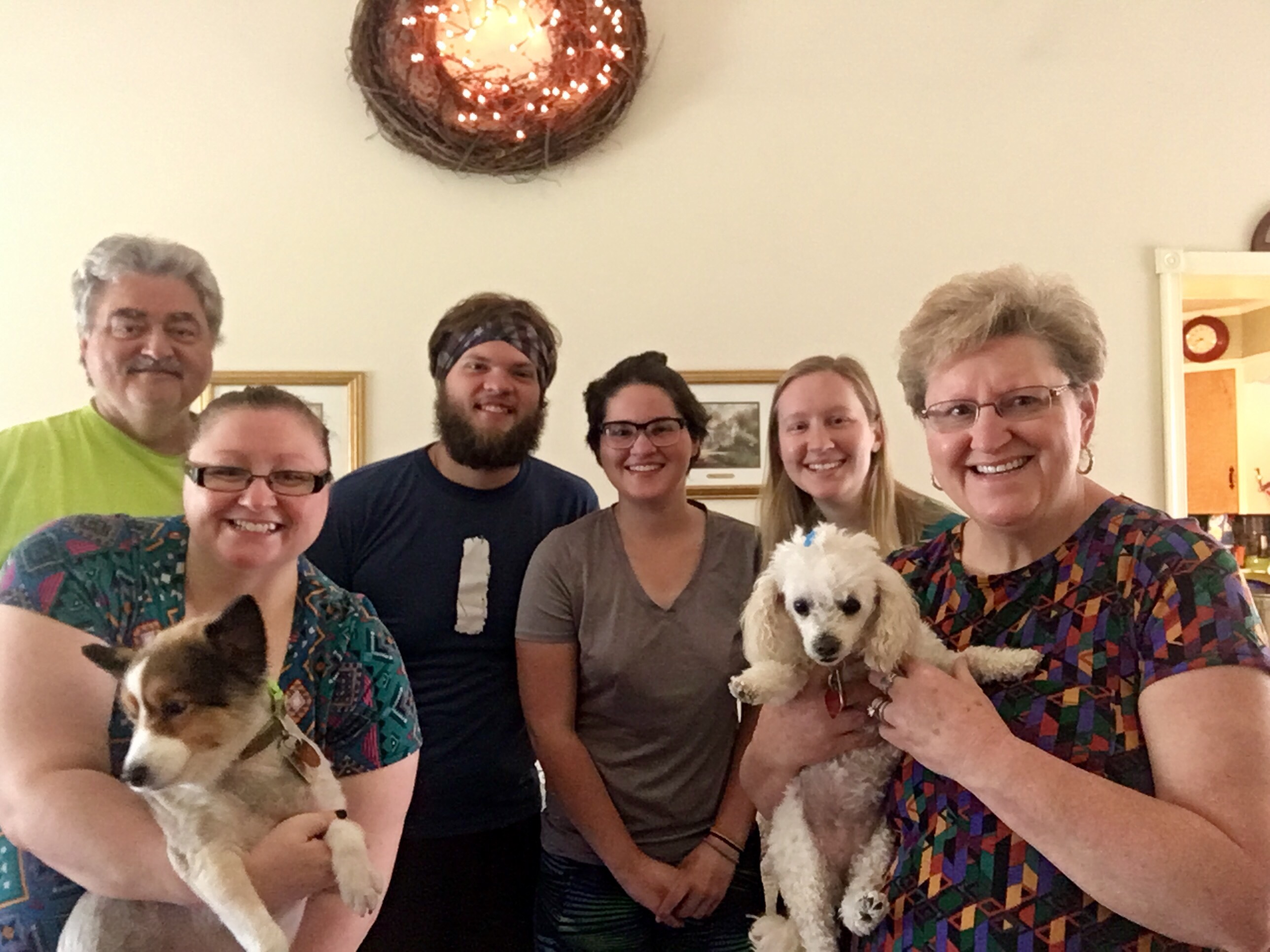 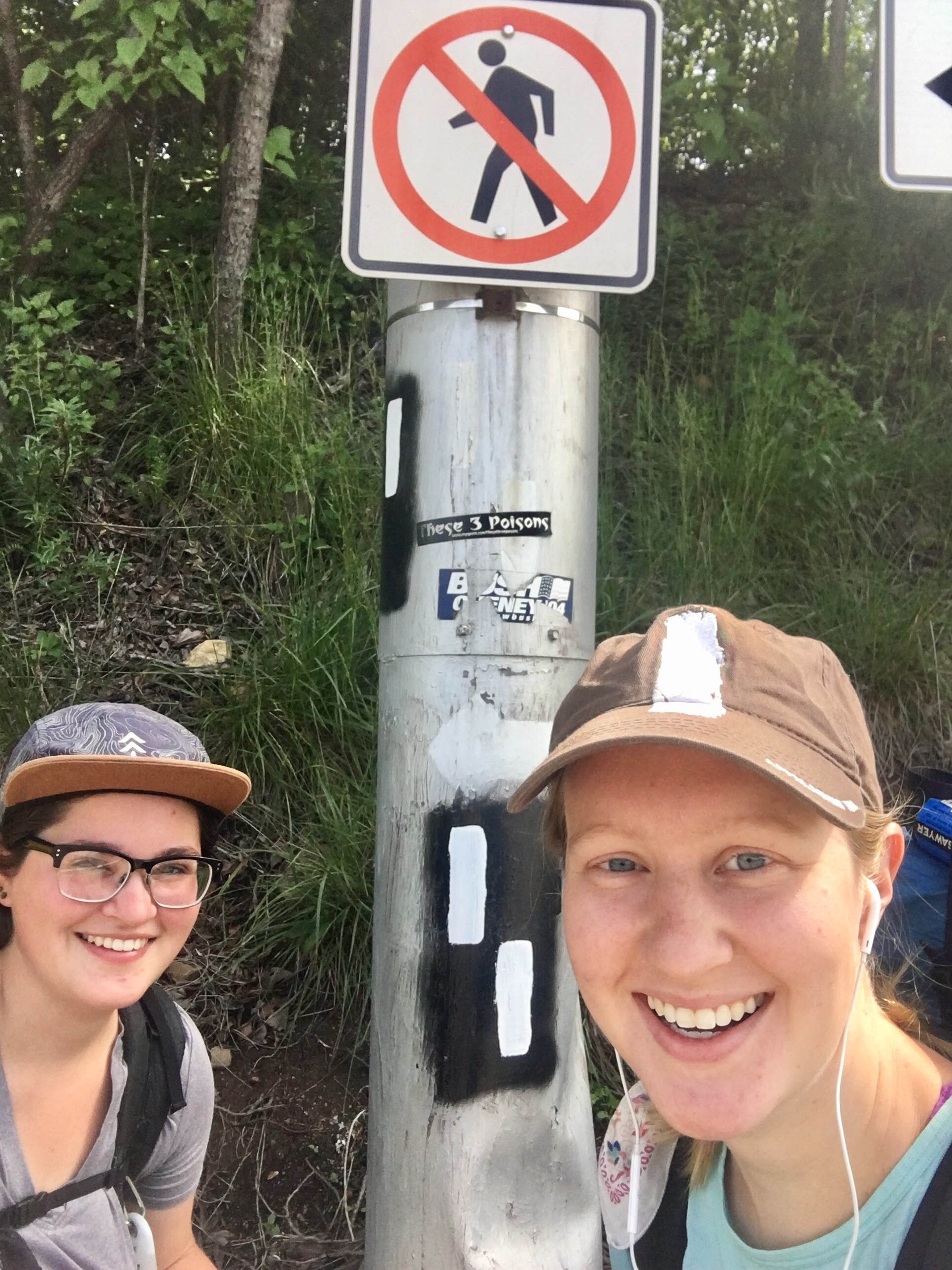 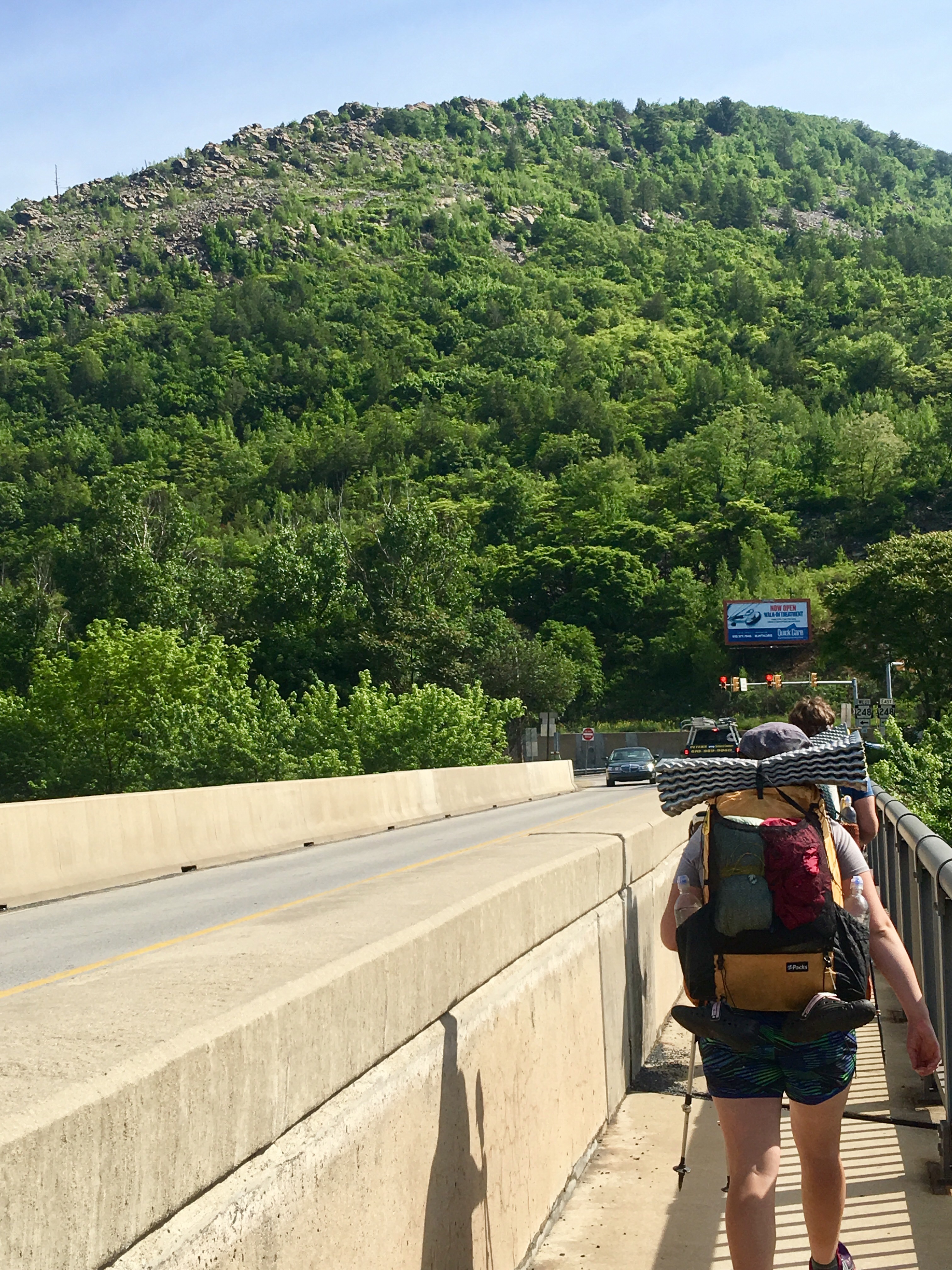 Crossing the bridge at Lehigh Gap

We hadn’t done many climbs recently, so this felt extra hard. The first half was shaded, and the second half was climbing and scrambling over rocks. One part was literal rock climbing. We made it in one piece, thankfully, and the next few miles were beautifully flat without rocks on the ridge line with a view of Palmerton. There was tall grass and I found a large tick crawling up my leg, so we put on Deet. 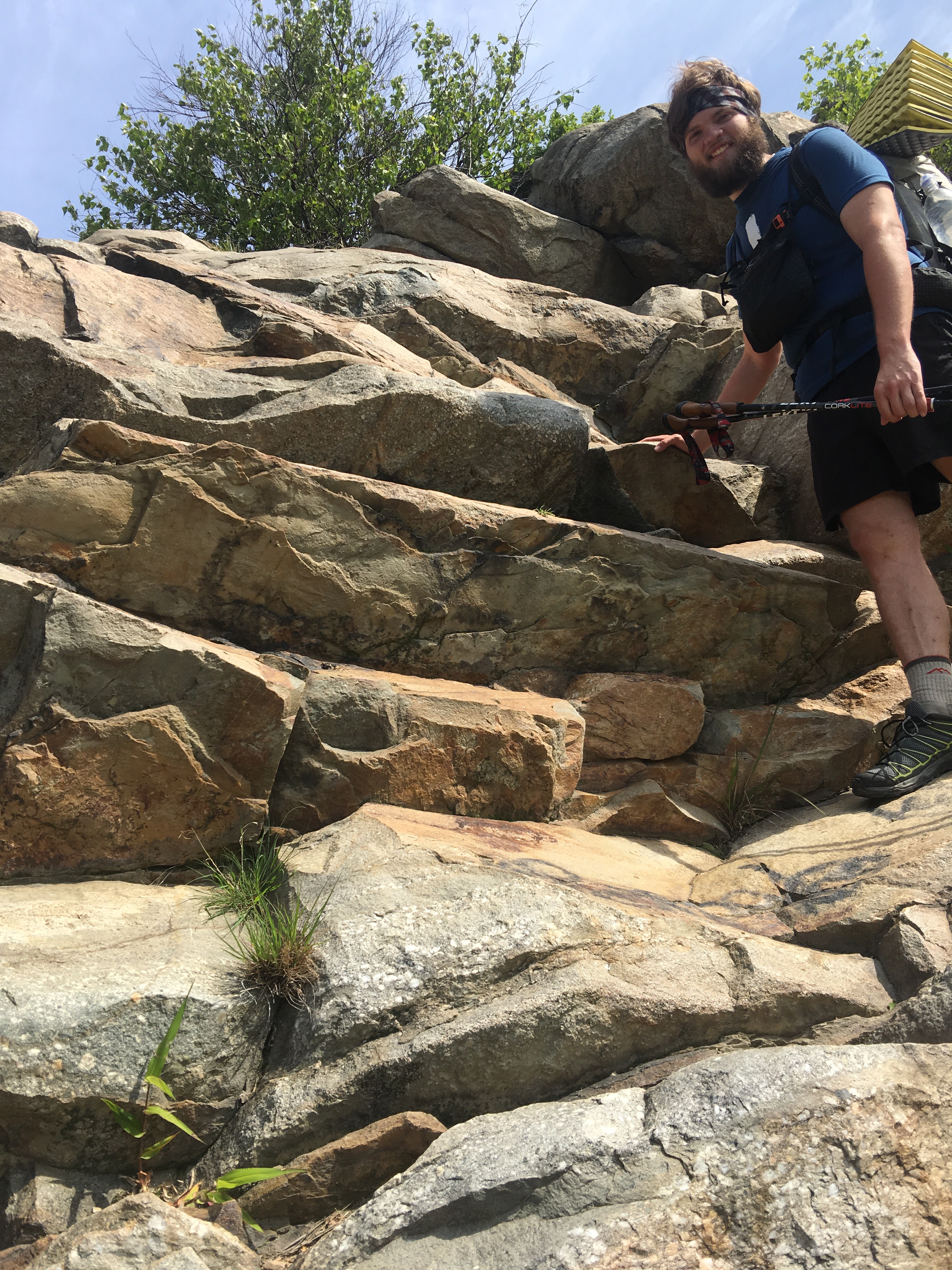 Rash climbing. The trail goes straight over the rocks 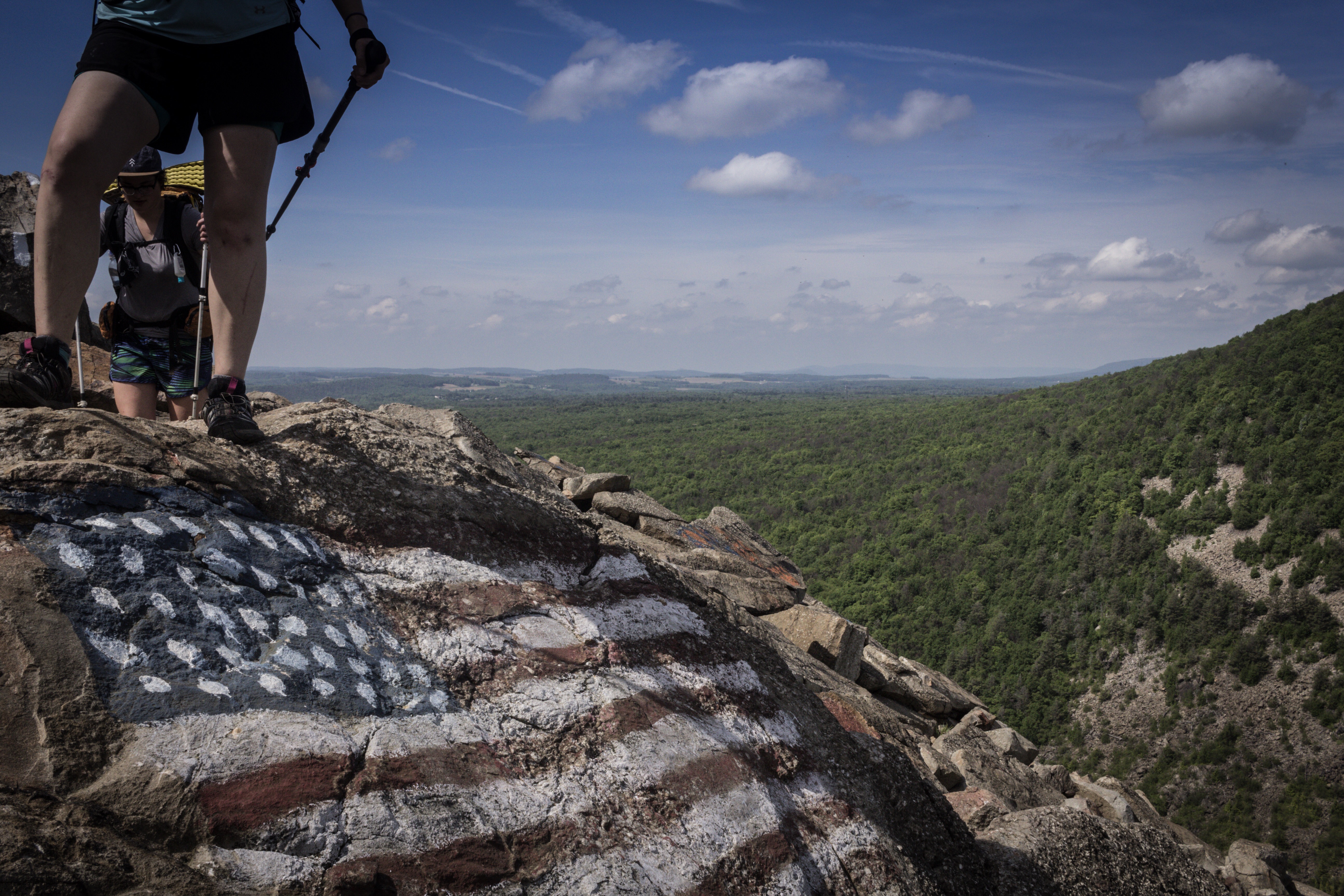 Top of the mountain out of Lehigh Gap (picture by Kris Mast). This picture was reposted by The Trek on Instagram 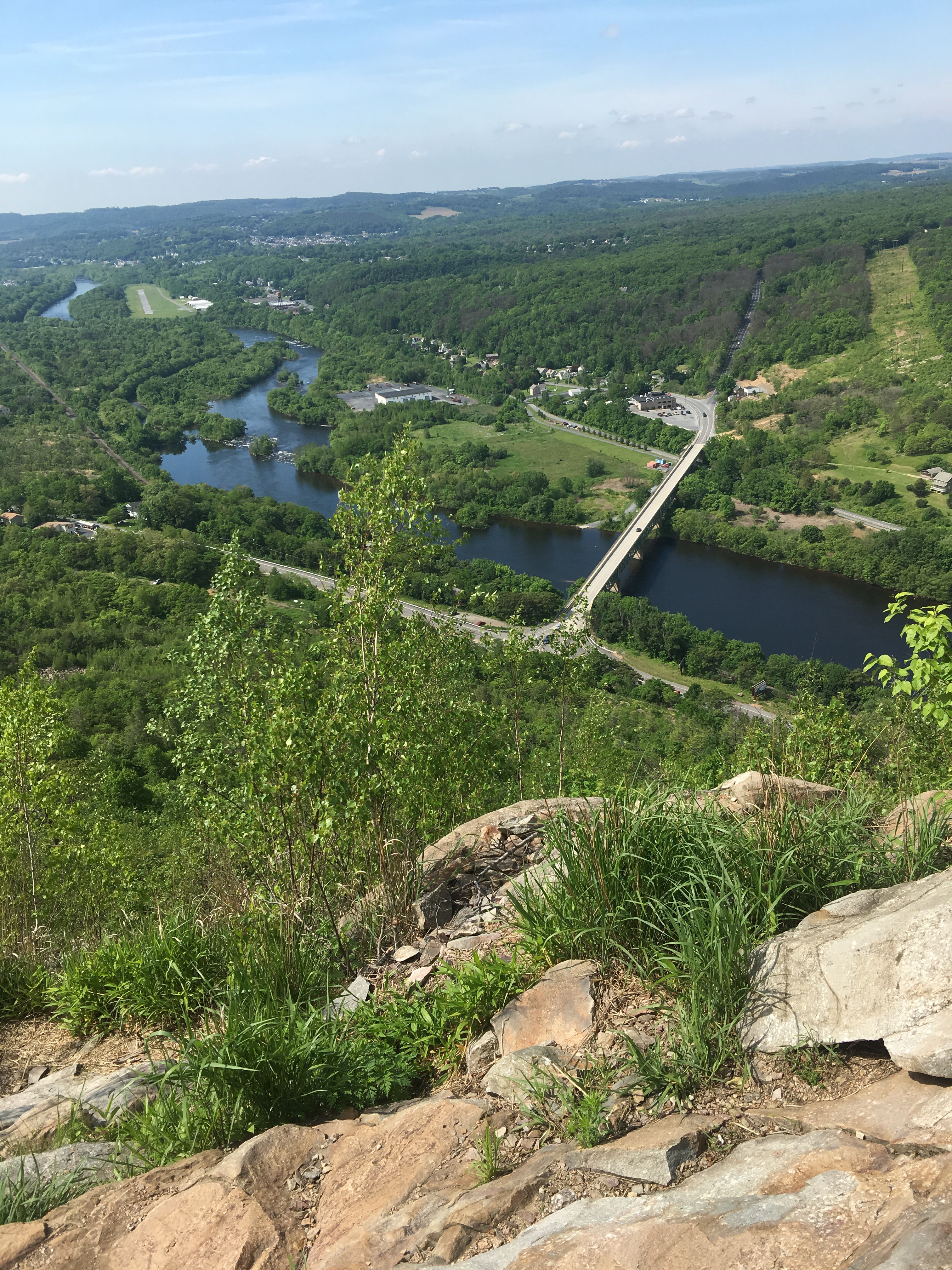 The view from the top

The zinc factory in town was closed and the area was tarnished with heavy metals. Water was a big issue today because we didn’t have any sources for most of the day. We stopped at a water source 6 miles from the shelter at a 0.4 mile blue blaze so Rash and Piñata could get water. I set up my hammock and chatted with my mom on the phone.

We made it to the shelter and it started raining. The people in the shelter squeezed us in, and we were grateful to not be hammocking in the rain. Another couple hikers showed up, one with a broken tent. Since the shelter was already overflowing, he camped with another hiker with a 2 person tent.

A man in the shelter was coughing, sneezing, and blowing his nose loudly all night, so I didn’t sleep well. Hikers started stirring around 5am. Bob, who graciously moved his pad to the outer part of the shelter last night to fit all of us since he gets up early, was the first up and out. Madison got up to get water from the far away 0.2 blue blaze trail since it wasn’t raining at 5am, and got back in his sleeping bag. I thought about doing the same but then fell asleep again.

When the three of us woke up a few hours later, it was raining lightly. I donned my rain jacket and followed Piñata to get water. I stopped to use the bathroom, and the walk was somewhat steep and very long. They had 3 springs to get water, but a hiker said the first spring was dry, so I went to the second. I found a plethora of little orange salamanders on the way. I didn’t pass Piñata, and when I finally got back to the shelter, she said she found a closer stream.

Rash and Piñata were already ready, so I hurried to eat my oatmeal and get packed up. The man who was coughing last night and his wife were up and packing up at 5am, but at 8am they were sitting in the shelter, all packed up, watching the rain fall. They were waiting for it to stop, but our weather apps didn’t mention anything about stopping until noon. They eventually decided to leave right before us.

We put our rain gear on and headed out. The rocks weren’t as terrible as the past few days, but they were still all over the trail, making it difficult to step without colliding with a few pointy ones. Around 9:00, the trickle of rain turned into a downpour for 30 minutes or so. We all got drenched. Afterwards, the rain slowed down and the sun even came out for a few minutes. We stopped for an early lunch, but even with extra layers became cold very quickly and I started shivering. I put my beanie and gloves on and we started back out. 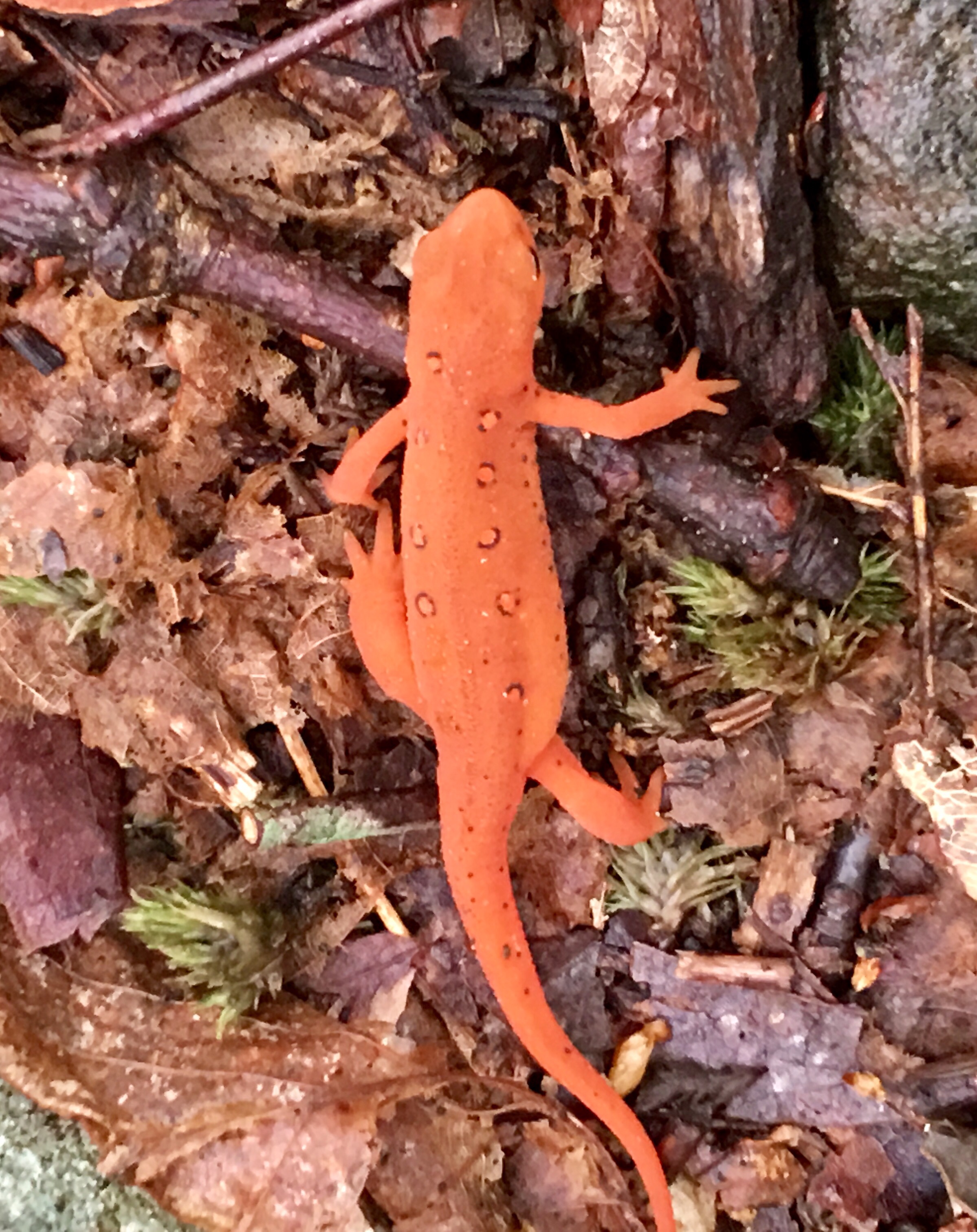 The rest of the trek was uneventful. The landscape changed dramatically the last few miles and reminded us of Jurassic Park. We saw some trees that Master Splinter (a ridge runner in the Smokies that was now taking an assignment at Delaware Water Gap) posted on Instagram that he cut down, which we were infinitely grateful for. 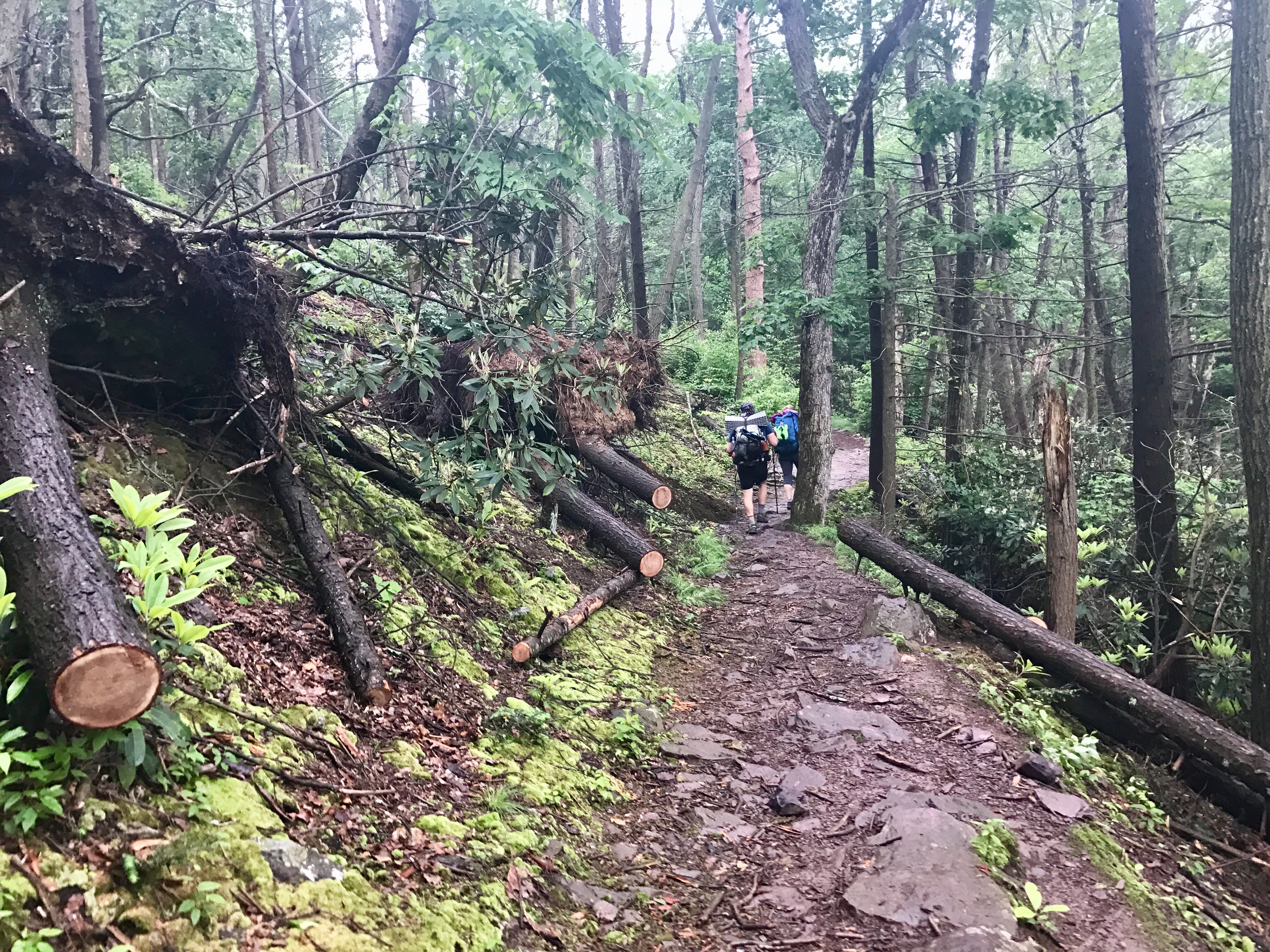 Before we arrived at the parking area, Piñata got a text from Pam, who was picking us up, that a hiker just came from our area and saw 2 black bears. We kept our eyes peeled, but saw nothing. We came to the parking area, Pam welcomed us, and we loaded up in her pickup. I was exhausted and felt like I was falling asleep on the 25 minute drive to their house.

We got to their house and a wonderful dinner of burgers, mac and cheese, and butternut squash was waiting. They had a hiking friend over for dinner and we spent the evening talking about hiking. They called their daughter Alli who is away at camp, and we talked with her on speaker phone. She has plans to do the AT next year.

We showered and talked about our itinerary for the next couple days. We were exhausted, and my and Rash’s feet were hurting. We turned in, me and Piñata sleeping in Alli’s room, and Rash sleeping in Jake’s room.